Home Reviews Fiio M6 review: an impressive digital audio player for those on a...

If you love audio, chances are you’d have heard of China-based FiiO. The brand came to the fore not so long ago in 2007, and since then has managed to carve a niche for itself with its feature-packed earphones. It’s also among the very few companies that manufacture digital audio players (DAPs) – devices that are a rarity in the modern smartphone era. We recently got the FiiO M6 digital audio player in our labs. However, with a price tag of Rs 14,990 – at which you can get a capable smartphone – you’d probably blink twice even before deciding whether you should be purchasing it. So while we’d discuss who it’s meant for in the verdict, let’s find out what exactly the M6 brings to the table. 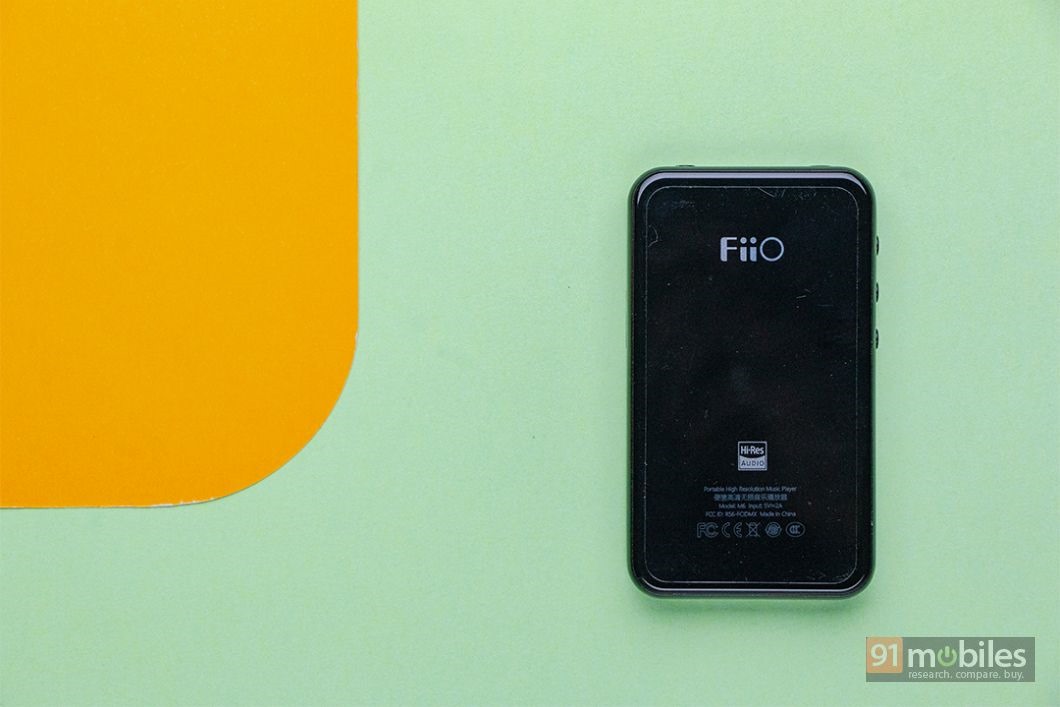 Perhaps the very first thing that will attract you towards the FiiO M6 is its size. In an age where smartphones have become larger than our hands, the M6 definitely manages to get your attention with its compact footprint. In fact, many of my colleagues asked me whether it’s a handset. You can easily carry it around in your jeans pocket. 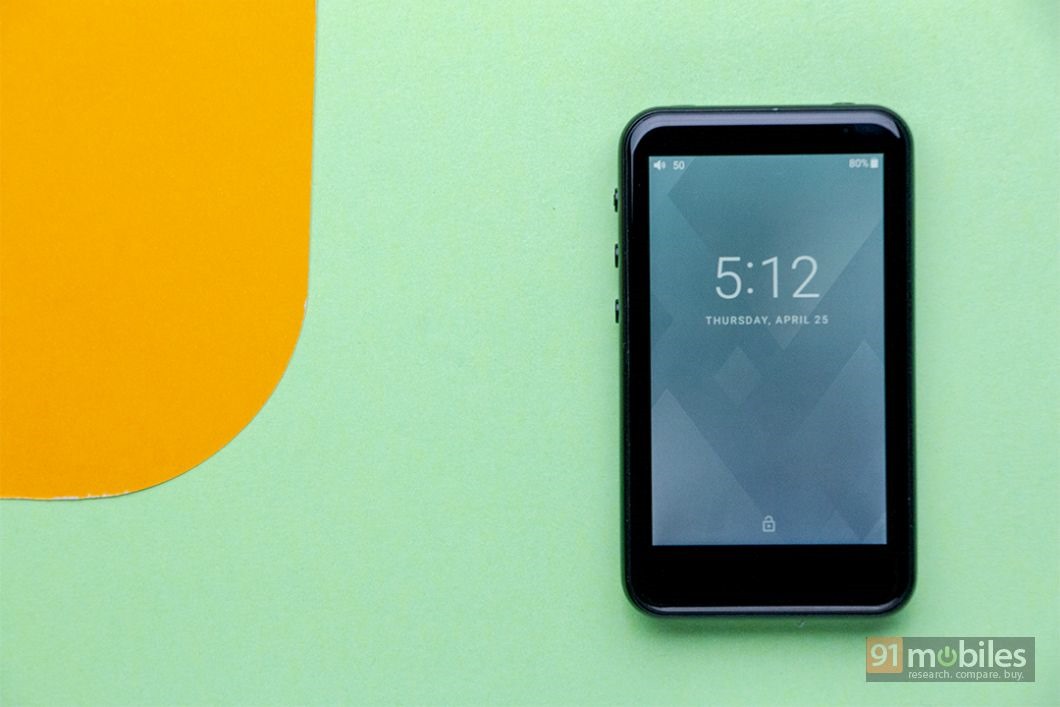 Not just in terms of dimensions, the FiiO M6 also comes across as a regular phone in many other aspects too. You get a power button up top along side the 3.5mm socket, whereas the pause button can be found on the left above the volume up / down keys. The microSD card slot can be found on the right spine, while the bottom is where you’ll find a USB Type-C port for charging.

Thanks to its aluminium frame, the M6 feels quite solid. The rear panel however is glossy, which makes it look premium but also makes the device susceptible to scratches and fingerprints. Which is why I’m glad that the brand has bundled in a protective case. 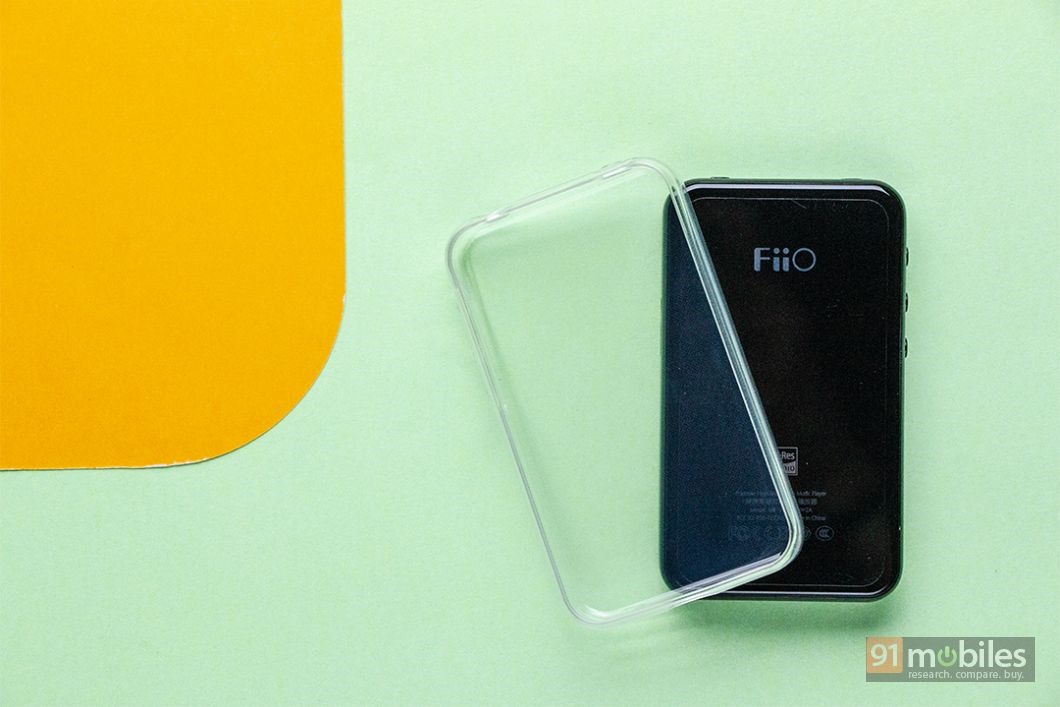 To interact with FiiO’s M6, you’d be relying on a 3.2-inch touchscreen. With a pixel density of 294ppi and a resolution of 480 x 800 pixels, the IPS panel is sharp and offers good colours as well. I didn’t struggle in using the device outdoors either. 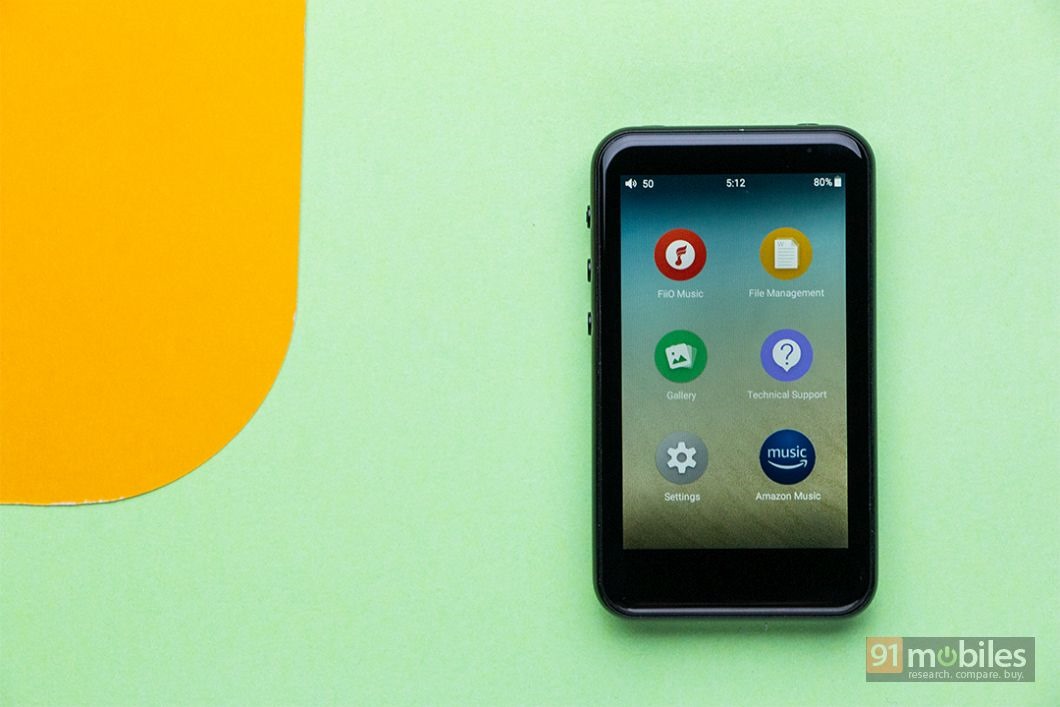 The FiiO M6 draws power from the Exynos 7270 chipset, which offers a dual-core processor clocked at 1GHz. The 14nm silicon is paired with 768MB RAM. Of course, one shouldn’t compare this hardware combination with a regular smartphone, for the M6 is built specifically for one purpose. And that’s why it comes with a custom version of Android. 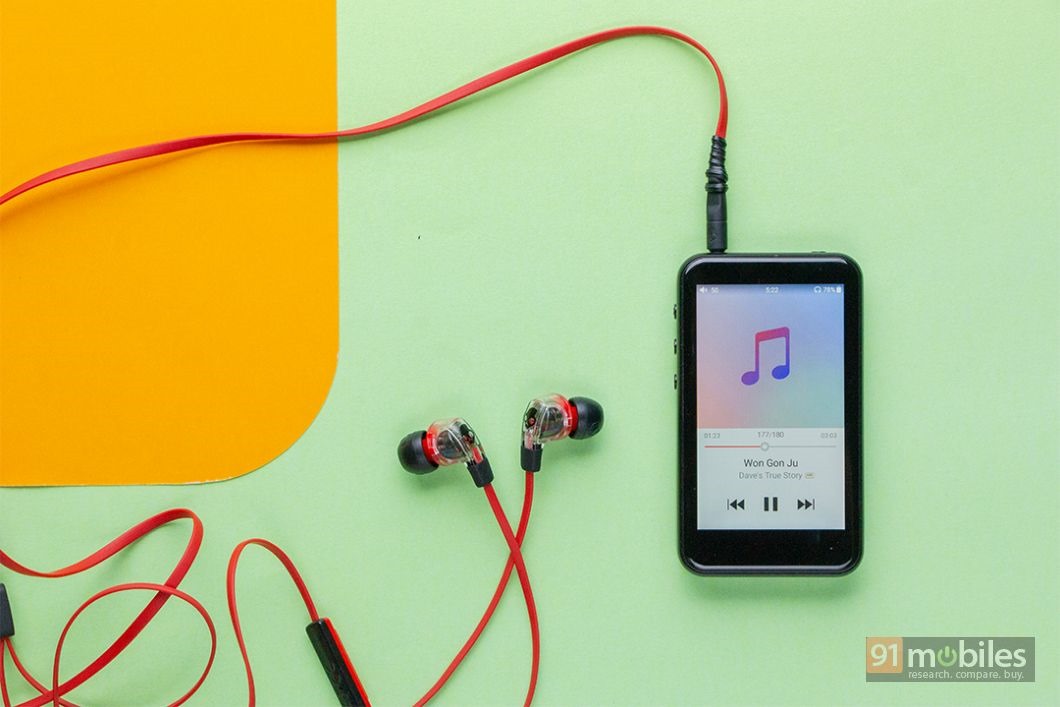 The interface is quite familiar yet different. The homescreen has all the installed apps laid out nicely. Pulling down the notification bar brings up the quick toggles and music playback controls (in case it’s playing), while swiping it again displays the full quick settings panel. The settings are barebones as well, giving you connectivity options like Bluetooth and Wi-Fi, along with the ability to tweak lockscreen settings. As far as the audio settings are concerned, you get the ability to select output, digital filter mode, wireless playback codec or enable USB DAC or AirPlay (more on that later).

By default, the device ships with a couple of apps., but the good thing is that you can uninstall the ones that you don’t need. Sadly, there’s no app store on the DAP, though you can install APKs for apps like Spotify, Bandcamp and ES File Manager.

Taking care of your storage needs is 4GB memory, out of which just around 2GB space is available to the end user. That’s why I’m thankful that the microSD card slot can accept up to 2TB storage, since high-res audio files are quite large.

How could we not mention the audio-specific hardware in this section? The device gets ES9018Q2C, a 32-bit DAC that can play songs at up to 384KHz.

Of course, this is the make-or-break point for the FiiO M6. So how well does the device improve the auditory experience? To put it simply, you’ll love listening to the crisp audio that the M6 has to offer, provided the files are in the high-res FLAC or DSD format. I paired the player with the Tin Audio T3 and KZ ZS10 (review) earphones and could notice the difference almost immediately as compared to using the same earphones with a laptop or a smartphone. Of course, the device can play MP3 songs, though doing that won’t harness the actual potential of the M6. 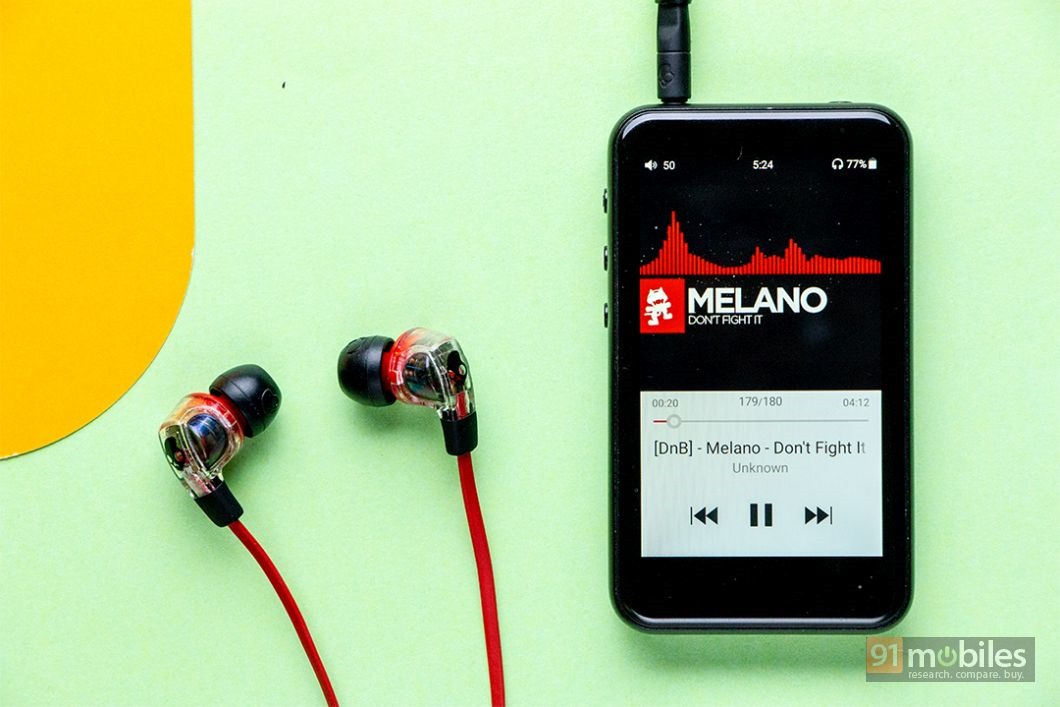 I started with one of the most popular songs ever – Ed Sheeran’s Shape of You (FLAC format), and I must admit that one can easily discern the difference brought by the DAP. The song shows that the device does justice to all the frequencies. In Coldplay’s Life in Technicolor (FLAC format), you can easily make out the different instruments playing and thanks to the good sound staging, you can hear them individually. And in AR Rahman’s Dreams on Fire (FLAC) and Imagine Dragons Whatever it takes (FLAC), vocals are immensely clear while ensuring that the highs aren’t overpowering. In the latter especially, while listening to it via a smartphone or laptop, you wouldn’t be able to get such a good sound separation. The same remains the case with EDM songs and any other genre that you might like. I also listened to DSD remastered version of Rolling Stones’ Sympathy for the Devil and was blown away by the balanced vocals and treble. But perhaps the biggest testament to the M6’s prowess is be able to listen to each of the instrument, vocals and even audience reaction in the live rendition of I Don’t Trust Myself (With Loving You) by John Mayer.

You can, of course, connect Bluetooth earphones with the FiiO M6 to enjoy a wire-free experience. However, in this case the song would sound as good as the format supported by the pair. If the earphones support SBC, then you might not be able to notice a massive difference in the quality, though if the earbuds support LDAC, then you’d feel significant improvement.

The M6 can go up to 120 volume levels, though be warned that the audio gets really loud and while it doesn’t sound shrill, you do lose out on the richness a bit. The gadget also has a slew of options for those who like to tweak the equaliser settings and get better tonality.

The FiiO M6 also aims to be more than just a digital audio player. You see, you can connect it to your Android or iOS smartphone to play songs from the handsets on the device. Not just that, as mentioned above, with support for Airplay, you can stream music off the M6 and control it via your iPhone or iPad. Then there’s support for USB DAC which lets you do the same from your laptop, although I wasn’t able to enable the same on my Windows-based laptop. 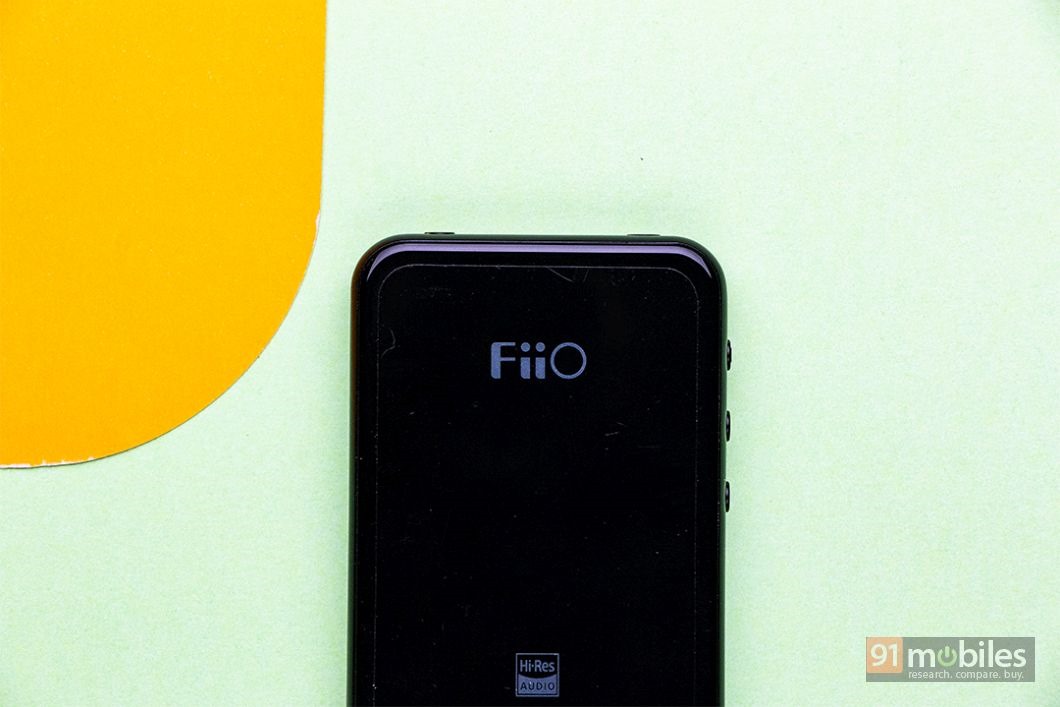 Fuelling FiiO’s M6 is a 1,200mAh battery that’ promises to offer around 13 hours of music playback time with wired earphones and 15 hours with Bluetooth earphones. My usage usually met these claims as I was able to listen to the music the entire work day with ease, and only needed to juice up the player in the morning. Thanks to the presence of the Type-C port, the device can be charged using the same adapter as the one bundled with most Android phones these days. Using a 2A power brick, the M6 charged from 10 percent to 100 percent levels in a little more than two hours.

The FiiO M6 is meant for one job – and it does that really well. Depending who you ask, its price tag of Rs 12,999 (launch price was Rs 14,999) might excite audio aficionados or put off a general user. Along with offering better audio fidelity for the connoisseurs, it also works well with smartphones and PCs, and offers the ability to listen over Bluetooth as well. With regards to the competition, there aren’t many DAPs in this segment, though you can take a look at the Cayin N3, which is available for Rs 11,999. 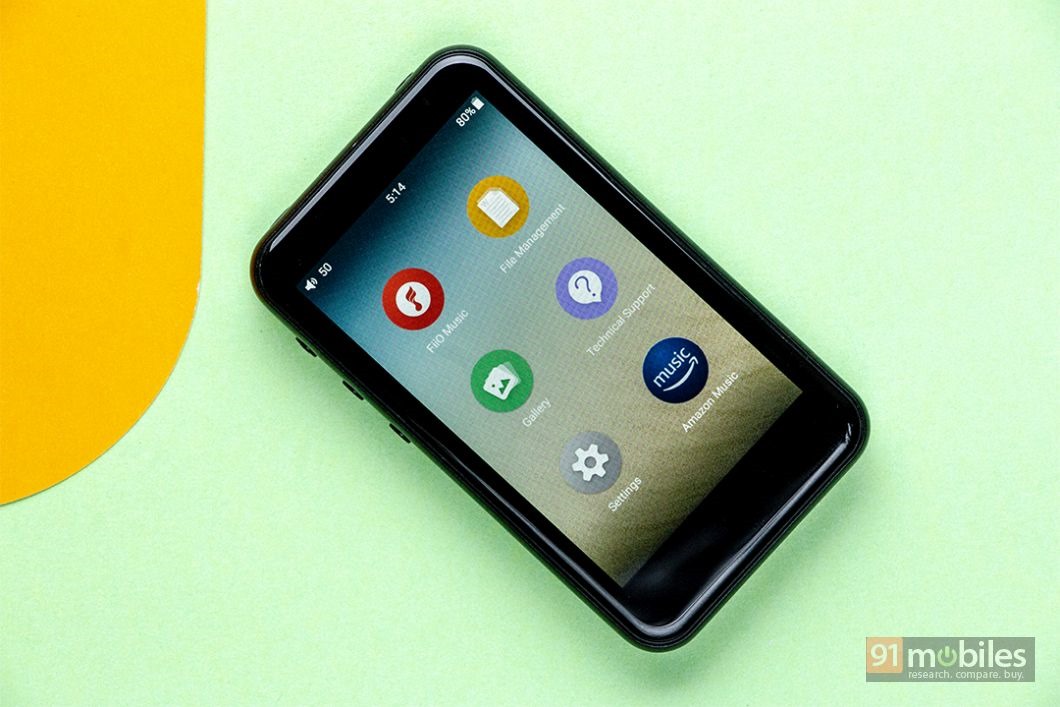 Considering most DAPs are priced on the higher side, overall, the FiiO M6 comes across as a great option for those who want to upgrade their auditory experience without breaking the bank.