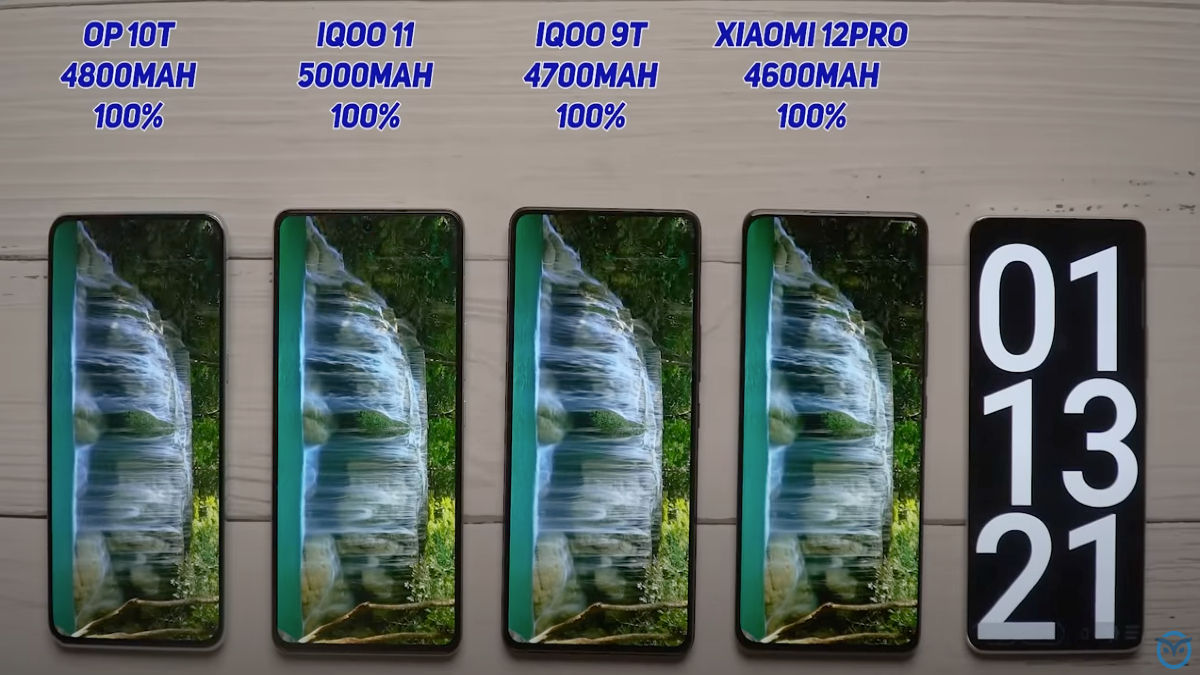 Battery department is that one segment that is a tough nut to crack especially these days where smartphone usage is on the rise. iQOO 11, Xiaomi 12 Pro, OnePlus 10T, and iQOO 9T are some of the latest flagship offering on the market and the folks at MySmartPrice did battery drain and charging tests on these smartphones to see which turns out to be the winner with better battery life. The tests are conducted with each device set at maximum brightness and performance modes.

After the charging speed test round, the battery drain round moved to the video playback and speaker tests for about two hours. After the 2-hour mark, the iQOO 11 had consumed lesser battery compared to other flagships on the list. The battery here dropped to just 85 percent with 750mAh of capacity used. Sitting in the second place was the iQOO 9T with 940mAh capacity consumed and 80 percent remaining.

OnePlus 10T and Xiaomi 12 Pro secured third and fourth places, respectively. The battery capacity of the phones were 79 percent and 75 percent. It should be noted that iQOO 11 has the highest battery cell compared to other models.

The battery drain test further moves to benchmark scores. Unsurprisingly, the iQOO 11 topped the list with a pretty impressive margin. The Xiaomi 12 Pro was the least scoring phone, which is not a surprise again considering the throttling issues. After Geekbench, the phones were put through AnTuTu and Throttling tests, which went for another hour. Again, iQOO 11 consumed less battery, with 58 percent juice still left in the tank. This was followed by iQOO 9T with 52 percent battery, OnePlus 10T at 48 percent, and Xiaomi 12 Pro had 46 percent battery, which was the least of all.

The flagship phones were then put to a video recording test, which sometimes is a stressing test. This lasted for around 30 minutes and by the end of it, Xiaomi 12 Pro almost ran out of juice with just 2 percent left in the tank. iQOO 11 was still on top with 30 percent capacity left, while the iQOO 9T and OnePlus 10T had 16 and 14 percent capacities.

Lastly, the phones were put through social media scrolling. Xiaomi 12 almost instantly ran out of battery, right next to it was the OnePlus 10T followed by iQOO 9T. The iQOO 11 had over 15 percent battery capacity at the end of the test and became the winner.