It’s common perception that if a smartphone from an Indian vendor is available at entry-level pricing, it might rock better specs compared to similarly-priced offerings from multinational brands, but it’ll probably have substandard components. The Lava Iris 406Q attempts to change this notion with a good design, Qualcomm chipset and Android 4.3 Jelly Bean that’s just shy of the latest Android version. More importantly, all this available at an attractive price. So, how well does this translate into real-life usage? Let’s find out in our Lava Iris 406Q review. 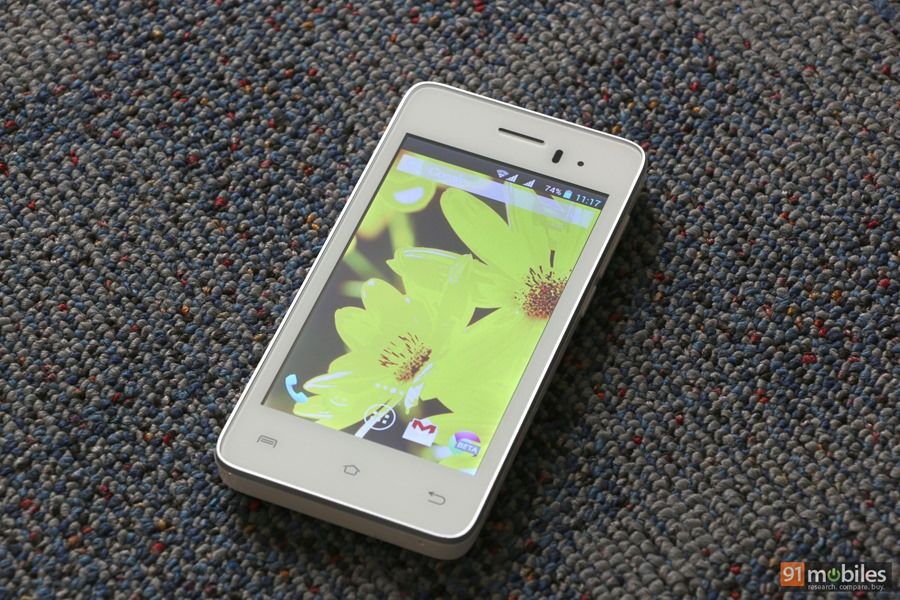 Looking at the smartphone from a distance, you might mistake it for the eminent Apple iPhone 4S, thanks to its compact size and design similarities. Due to this, the Lava Iris 406Q comes across as one good-looking device. It might feel bulky for its size, but that also gave us a reassuring feel about its build quality. The thickness of 10.3mm might be more than the ‘thin is in’ norm these days, but makes for a good grip. The device is available in black and white options, and our review unit sported a classy white hue. 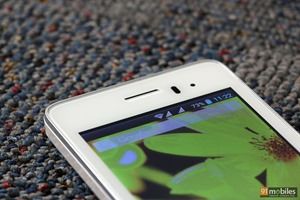 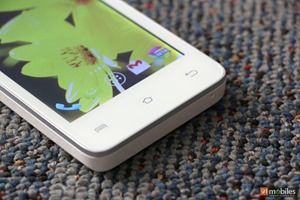 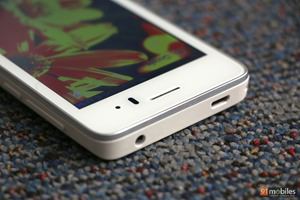 Along with the display in the front, there’s the usual array of capacitive keys at the bottom for navigation. However, they aren’t backlit and require a precise touch, especially the home button (which also doubles up as the recent apps key). Above the display, the device houses an earpiece, front shooter, proximity and ambient light sensors. The top edge of the Lava Iris 406Q features a 3.5mm audio socket and microUSB port, while the volume rocker and a power key are placed on the right. However, the keys were placed too closely for our liking, and we often ended up decreasing the volume instead of putting the display to sleep. The left side and bottom of the device are completely free of any buttons, barring a microphone on the bottom edge. 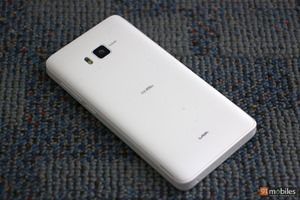 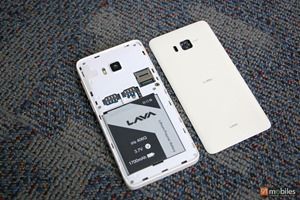 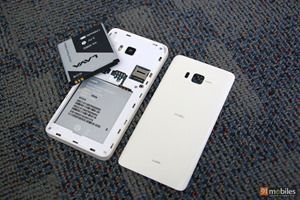 The rear has a smooth finish and is home to the main camera with an LED flash. Although it attracts fingerprints, the cover isn’t slippery, unlike many other devices. Removing the cover exposes a removable battery and slots for a microSD card and SIM cards.

Similar to the Iris Pro 20, the device comes with a flip cover that needs to be adhered to the back cover. It’s definitely not the ideal way to use a flip cover, but still ends up protecting the handset. It also keeps the smartphone in upright in a horizontal position, which is ideal for watching videos.

The display leaves a tad to be desired

The Lava Iris 406Q sports a 4-inch display with a resolution of 800 x 480 pixels. With a pixel density of 233ppi, the display is sharp enough with no visible pixelation. Colours tend to look washed out, but the device gives you a choice of standard, vivid and custom options to change the colour scheme. Automatic brightness doesn’t seem to work most of the times, so it’s better to set the level yourself. Under sunlight, the display is legible, though you might have to struggle a bit. 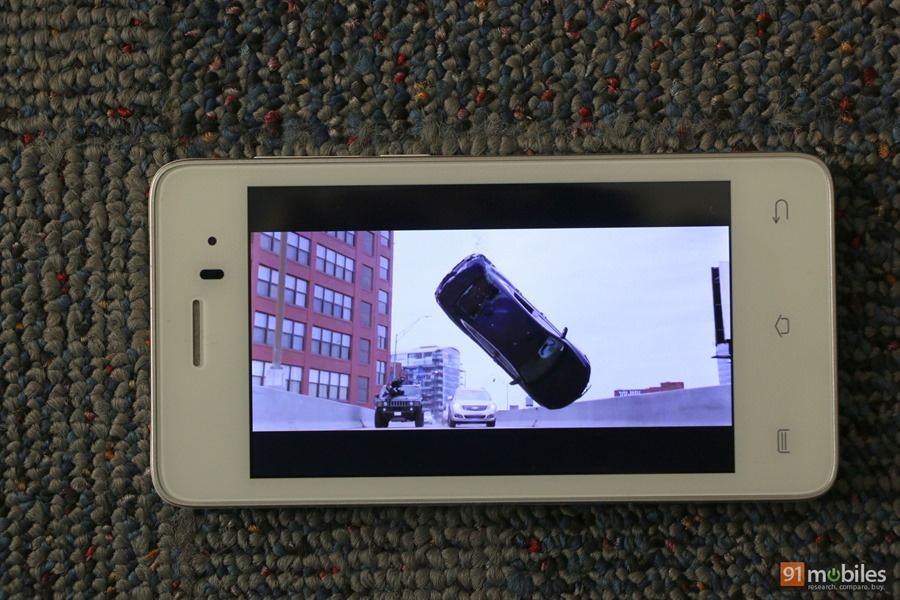 The screen accepts two-point multitouch and is responsive, although we did notice occasional lags while typing.

Don’t expect much from the shooter 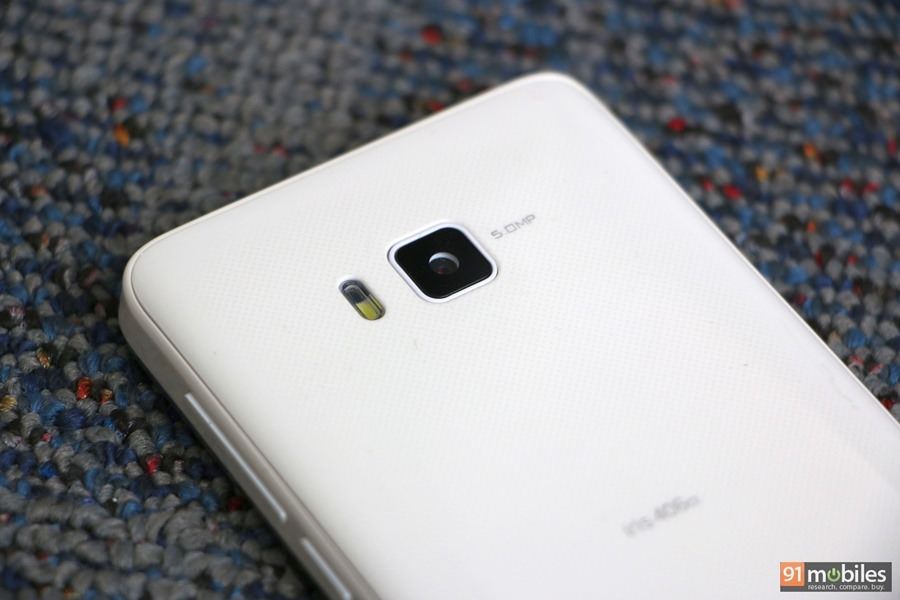 When it comes to the Lava Iris 406Q’s camera performance, the entry-level pricing didn’t help in getting our hopes up. We were disappointed with the fact that the camera is fixed-focus. The camera interface is slightly different from the stock Android app, but offers almost the same set of options. It allows you to take normal images, panorama, photos in continuous mode, HDR, and add various effects. The settings menu gives you a ton of options to adjust exposure, white balance, sharpness and ISO, among others. 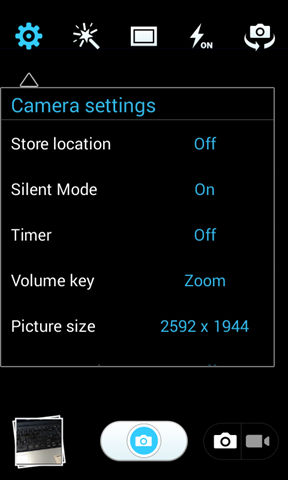 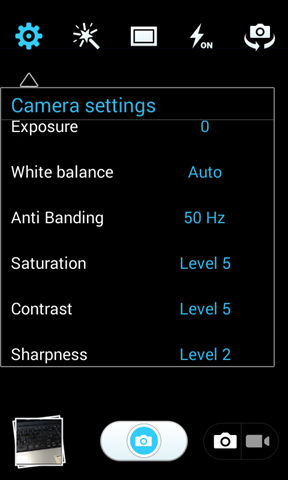 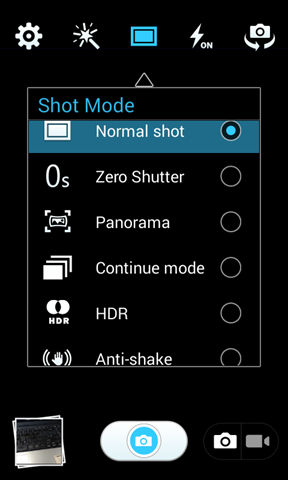 In ample lighting conditions, images display satisfactory detail. But in indoors and low-light situations, the quality is very poor.

The rear snapper is also capable of recording videos at 720p resolution. The VGA camera in the front is able to shoot images and videos in 640 x 480 (VGA) resolution and can be used for video calling. But selfies, a trending feature nowadays, don’t really look too good.

Here are a few images taken from the Iris 406Q (click on them to see them in full resolution). 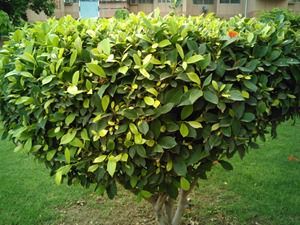 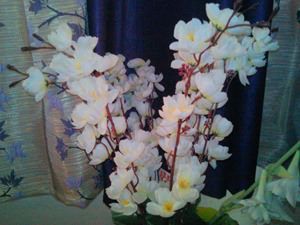 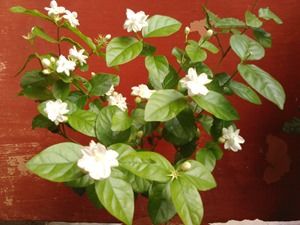 The smartphone is powered by Android Jelly Bean 4.3. Although the vendor has promised an upgrade to 4.4 KitKat, it’s yet to arrive. The Iris 406Q may not feature heavy customisations like other offerings, but it does sport a few differences when compared to stock Android UI. In fact, we were little surprised as these subtle, yet useful changes weren’t present in the brand’s premium Iris Pro range – the Iris Pro 20 and Iris Pro 30. 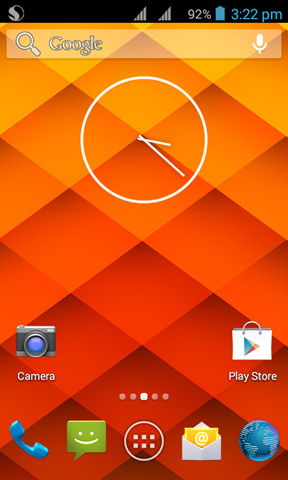 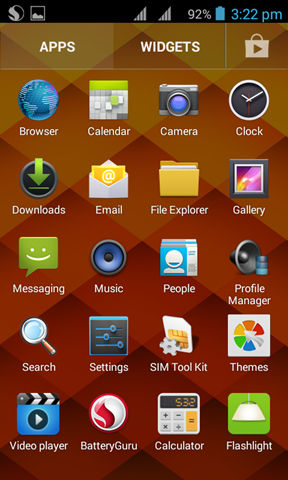 The device sports a custom theme and also provides an option to change it (there are two more themes available). Though the default theme retains the standard Android icons, other two themes change them. The custom launcher isn’t too different from the stock one, but does feature some useful options like hiding apps or adding animations while scrolling through home screens. There’s a small change in the dialer interface as well, giving you an option upfront to call via a specific SIM. This comes very handy, as most dual-SIM phones require you to preselect the default calling SIM. There’s also an extremely useful option to take notes while on a call. The notification panel on the top and quick settings menu are same as on other ‘droids. 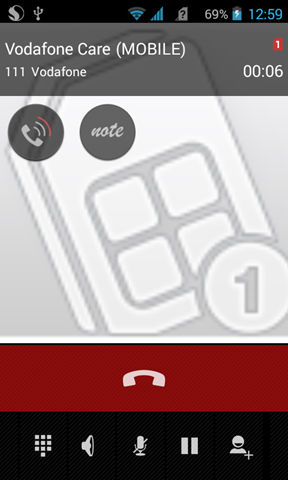 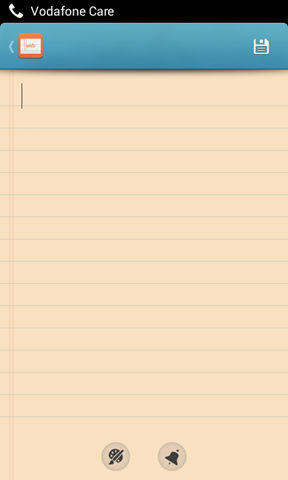 There aren’t many preloaded apps on the device, except for OfficeSuite to view documents, Flashlight (accessible from quick settings as well) and WhatsApp.

Delivers strong performance for its price 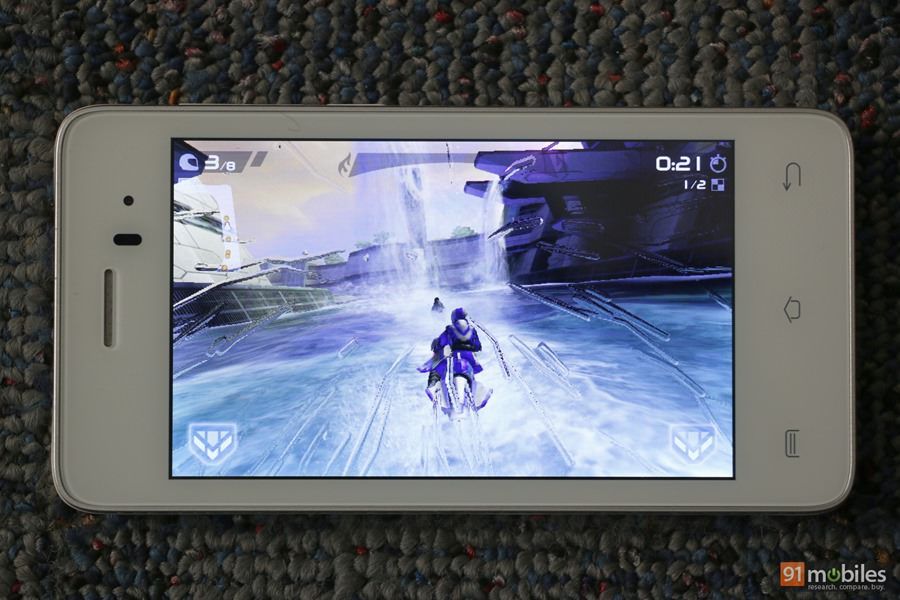 There’s no doubt that Lava has packed strong hardware into the Iris 406Q for its asking price. It’s one of the very few devices in this price band powered by a Qualcomm SoC instead of MediaTek. It packs in a 1.2GHz quad-core Snapdragon 200 chipset and a gigabyte of RAM for multitasking. The device performs well and there’s no sign of lag while navigating screens, opening and closing apps and even playing games. The integrated Adreno 302 GPU renders good graphics. Games like RipTide GP2 and SmashHit ran well, though there’s a noticeable lag when heavy graphics are being displayed. But the good news is that the handset doesn’t heat up while playing. 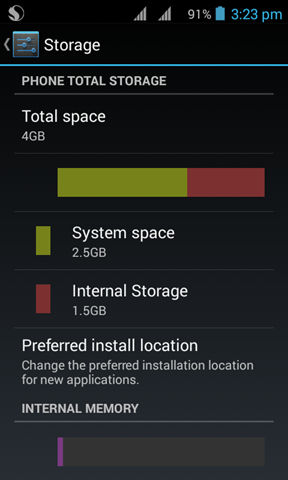 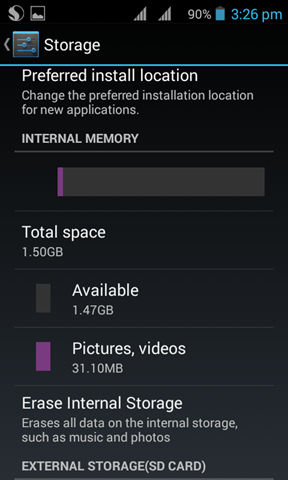 For storage, the device offers 4GB internal memory, which is quite measly considering only 1.5GB is user-accessible and the rest is taken up by the operating system and other stuff. It goes without saying that if you’re a heavy gamer or install too many apps, the internal storage will fail to meet your requirements. The microSD card slot gives you an option to expand the storage further up to 32GB. Sadly, the device doesn’t support USB on-the-go.

When it comes to connectivity, the Lava Iris 406Q offers standard options such as 3G (accepts regular-size SIM cards, but 3G is supported only on the first slot), Bluetooth, Wi-Fi and GPS. However, we faced afew issues with call reception, with callers not able to hear to our voice and several disturbances marring the experience. This could be an issue with our review unit, but it happened frequently. 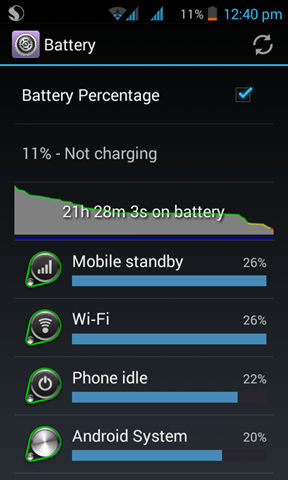 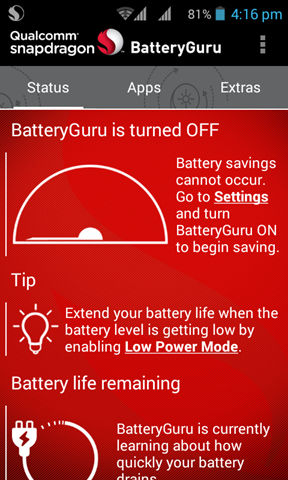 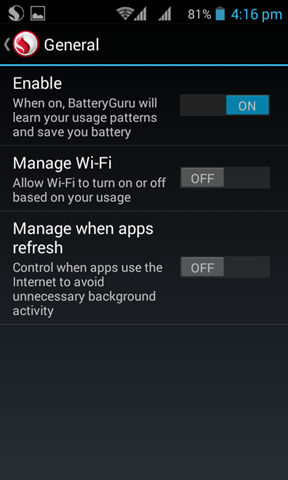 The smartphone is driven by a 1,700mAh battery, and should give you a day’s backup if your usage is very basic. But if you’re using it heavily for watching movies, playing games or even navigating via GPS and 3G, the battery drains very quickly. When we ran our usual battery test of playing an HD video on loop at 50 percent brightness and volume, the Iris 406q resulted in an average output of around six hours. The smarphone comes preinstalled with the BatteryGuru app, which learns from your usage and optimises the battery life accordingly. However it remains in learning mode for a couple of days to understand your usage patterns when it comes to apps and connectivity options like Wi-Fi. Like many other battery saving apps, it automatically starts when the battery falls below a certain point, and can also change the sync interval of apps to improve efficiency, which means that you may not get push notifications instantly. This shouldn’t be a concern, since you can manually control the apps and their sync intervals. Another useful feature is Charge Reminder, which will alert you to charge the device if the app feels that it can’t last until your usual charging time. 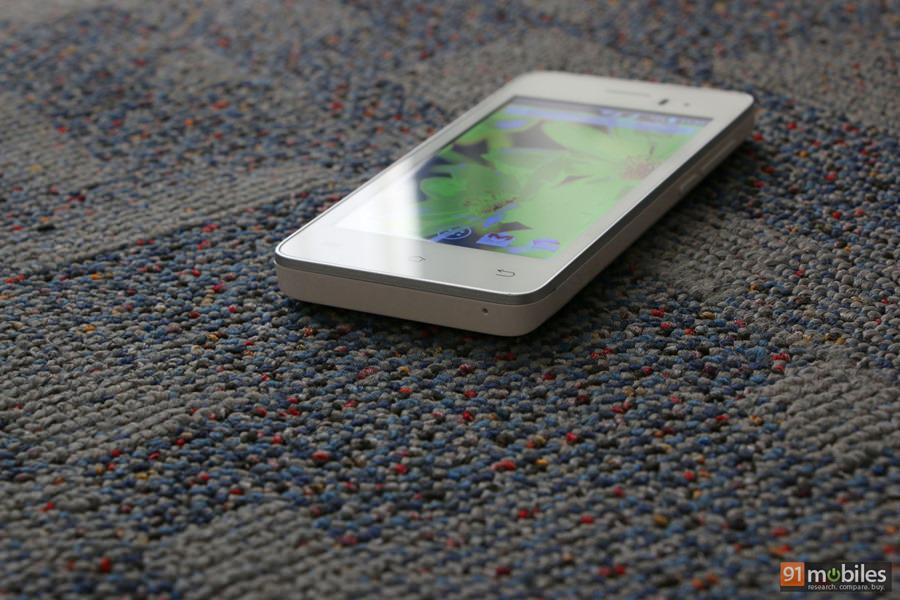 The Lava Iris 406Q is a great combination of solid build quality and powerful hardware. Moreover, the sticker price of Rs 6,999 makes it an impressive value-for-money option. We really appreciate that the brand hasn’t compromised on specs and quality while keeping the pricing low.

At the time of its launch, the device was almost a no-brainer option in its price segment. However, after showing the world that software can trump top-notch hardware with the Moto X and creating ripples with the Moto G in the affordable segment, Motorola has set its eye on the entry-level smartphone market with the Moto E. Priced identically to the Iris 406q, the device definitely ups the ante for other smartphones in this price range. Comparing both the devices head-to-head, the Moto E wins in areas like screen size, battery and the latest software, while the Lava Iris 406Q scores with its quad-core chipset, front-facing camera and LED flash supplementing the rear shooter. Micromax also jumped into the budget smartphone bandwagon with its Kitkat-flavoured Unite 2 at the same price of Rs 6,999. It wins in some areas like larger display of 4.7-inch and better battery capacity of 2,000mAh. All said and done, there’s no escaping the fact that the Lava Iris 406Q is a solid option to consider in the budget arena. Between this, the Moto E and the Micromax Unite 2, each has its own pluses and minuses, but Lava’s offering stands out because of its good looks and Snapdragon-fuelled performance.