“The K4 Note’s snapper offers reasonably good results, but can be a mixed bag”

Just about a year ago, we marked Lenovo as one of the smartphone brands to watch out for in the year 2015, and over the course of the next few months, the company proved us right. It has been very aggressive in terms of its phone launches through the year, launching one noteworthy device after next. And it has been pretty successful too, judging by a few reports we’ve seen. The notable budget phones from Lenovo launched last year included the A6000 Plus (review), but it also had others like the Vibe Shot (review) that were priced much higher. However, it was the K3 Note (review) that hogged the limelight for the longest time, and remained at the top of our popularity charts for five consecutive months. And now the brand has launched a sequel in the form of the K4 Note (unboxing | first impressions). The new smartphone follows the footsteps of its predecessor and comes across as good value for money, and has received upgrades in almost each and every department as compared to the older model. Talking about the camera specifically, the aspect we’ll be focussing on in this post, the K4 Note retains the same megapixel count as the older sibling, i.e. 13MP and 5MP for the primary and front-facing shooters respectively, but boasts a newer sensor that features ISOCELL tech and phase detection autofocus for faster focussing speeds. Of course, it ups the ante in other respects like build quality and performance as well, but for now, let’s just take a look at the image quality offered by its snappers. 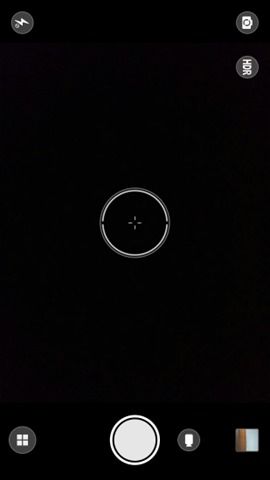 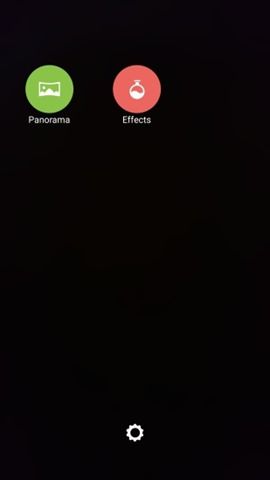 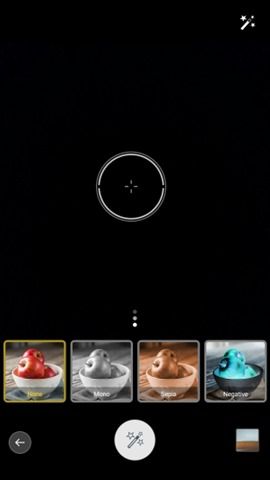 Talking about the camera app, the interface is quite bare, so all you get up front apart from the usual flash control modes and the option to switch between still and video shooting is an HDR toggle. Another button on the side offers a panorama mode and effects, with the latter covering a slew of colour filters. The options to tweak other parameters like aspect ratio, image quality, white balance and ISO are tucked away under camera settings. 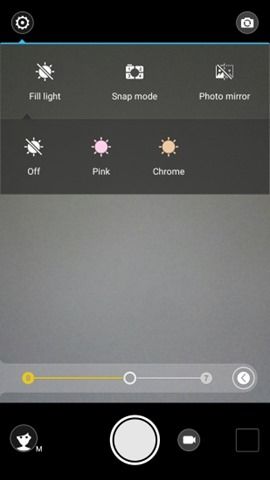 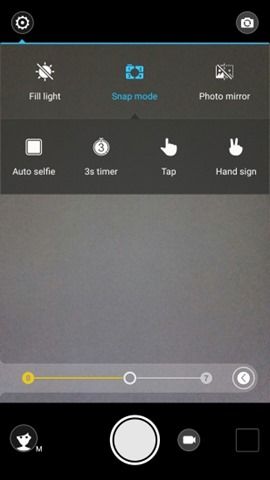 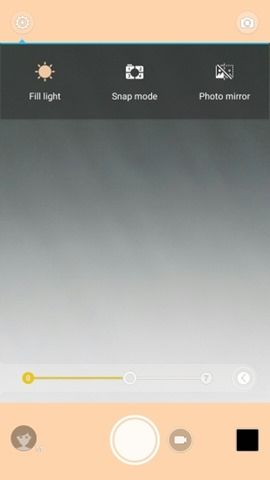 Surprisingly, switching to the front camera offers more options up front, so you get buttons for fill light, snap mode and toggling a mirror option on top. Fill light lets you choose between pink and chrome, and these colours appear as bright bars atop and below the viewfinder screen, offering a little more light in case you’re indulging in low-light selfies. Snap mode gives you a few options to shoot selfies, offering a timer and shooting options like tap-to-shoot and hand signs. A slider that controls beauty mode intensity is present as well.

Let’s dive into the real-life image quality and see how it fares as a shooter. All images you see have been shot in auto (barring the HDR image), using 4:3 aspect ratio and the highest quality available. 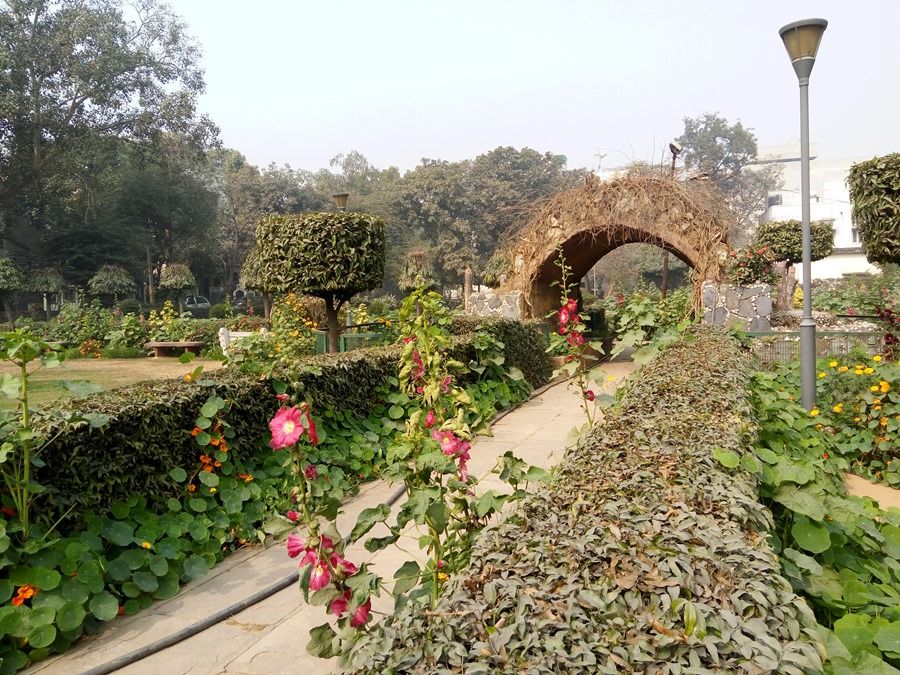 We were reasonably impressed with the results we got from the Lenovo VIBE K4 Note’s primary camera, as it captures sharp images in daylight and with lots of detail. The hues look nice as well, though we think that in some cases, the colours lack pop and the images look a tad washed out. 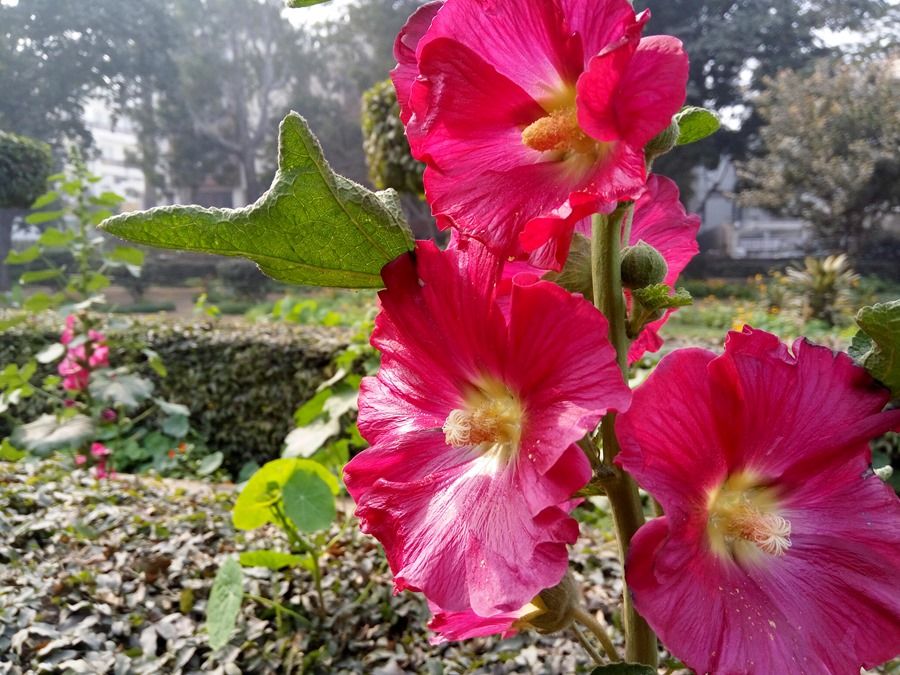 Subjects shot at close quarters in ample light turn out crisp and clear. The shot you see above is quite sharp on the subject, displays good colours and also shows a nice depth-of-field effect at the background. Even without magnifying the shot, we can make out the textures on the leaves and flowers quite clearly… but sticklers for detail that we are, we’re still going to zoom in for a closer look. 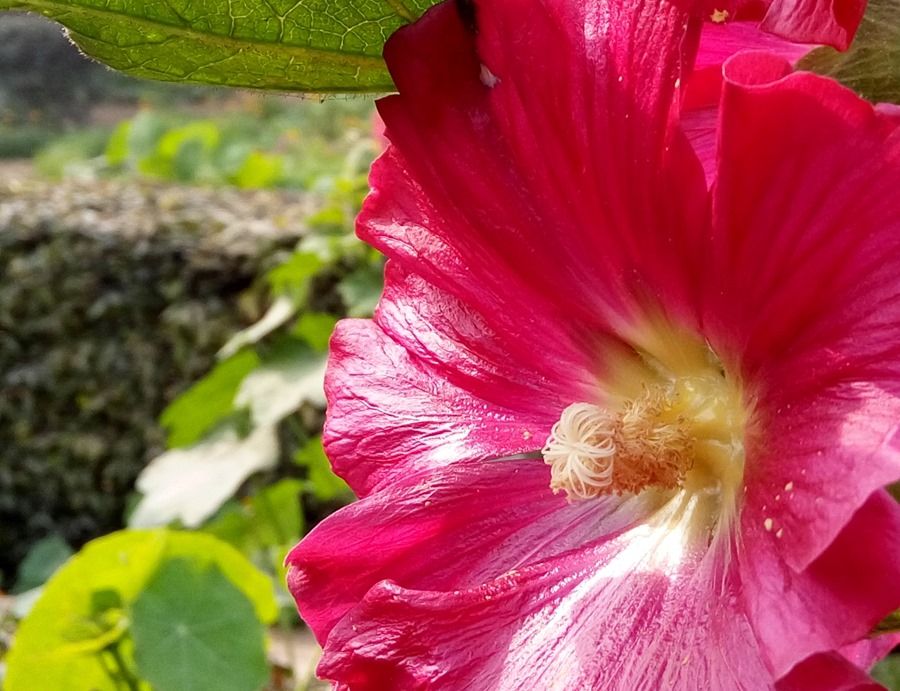 By zooming in into the photo we shot earlier, we can make out that the Lenovo K4 Note’s camera is quite capable, as the details are retained with hardly any signs of blurring. The anatomy of the flower is visible even more clearly now, with most aspects being reproduced quite accurately. 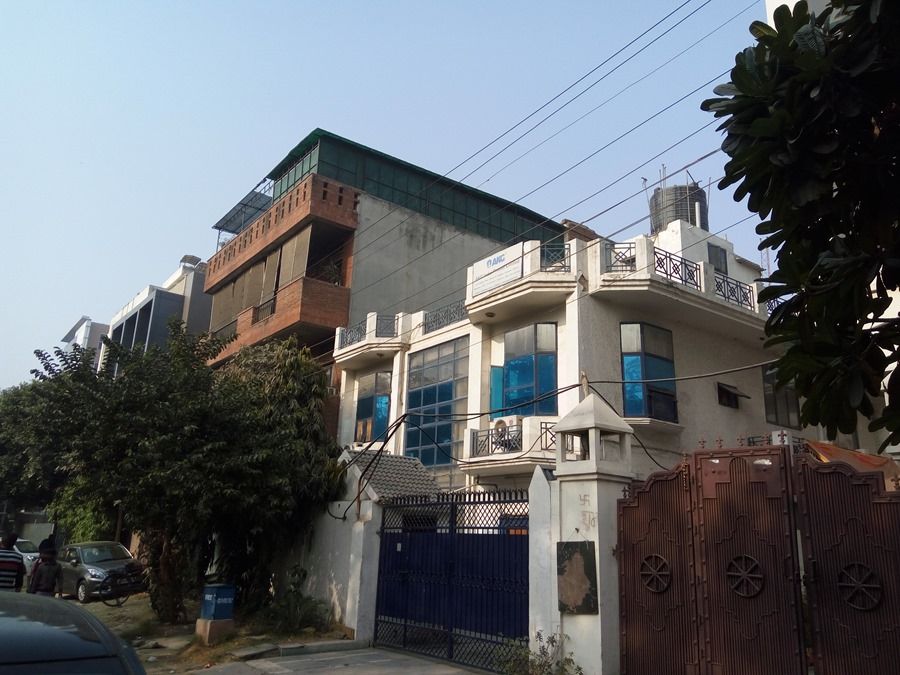 High Dynamic Range is a good test of a smartphone camera’s capabilities, and for the sake of comparison, here’s an image shot in auto. We can’t help but notice how dull it looks, though the foggy Delhi afternoon is probably more to blame than anything else. We’re hoping HDR can salvage the situation, so let’s shoot the same scene again with the HDR mode on. 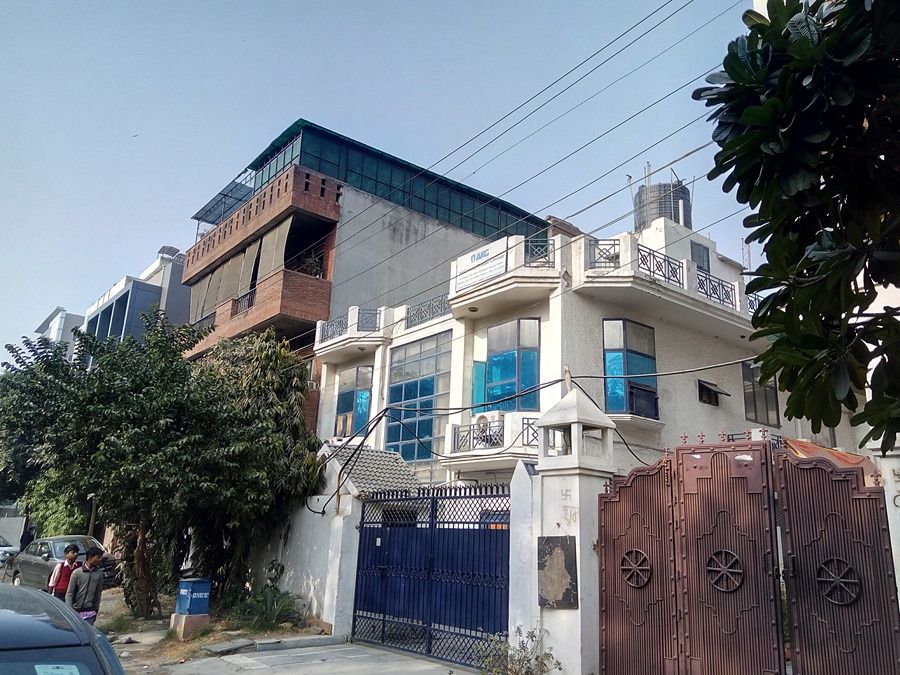 And it worked. It looks like HDR is one of the strong points when it comes to the K4 Note’s shooting prowess. The shot above looks much better than the one shot previously, bringing out the colours and the highlighting the darker areas of the scene well. The improvements are significant, and to see what we mean, take a look and compare different portions between the two images, especially the foliage on the left, the balcony on top left, the blue glass windows and the two gates right at front. 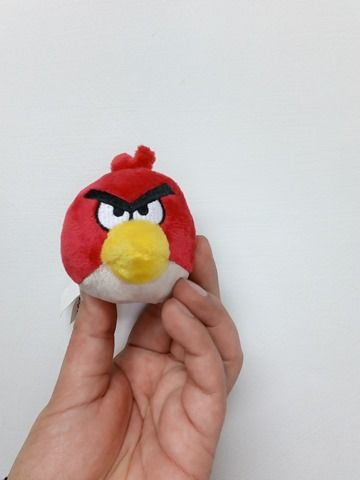 Using a rather clichéd but still popular character from the iconic bird-flinging series as the subject, we can see that the 5-meg shooter at front does a fair job, and should be able to offer usable selfies as long as there’s enough ambient light. Don’t expect wonders from it though. 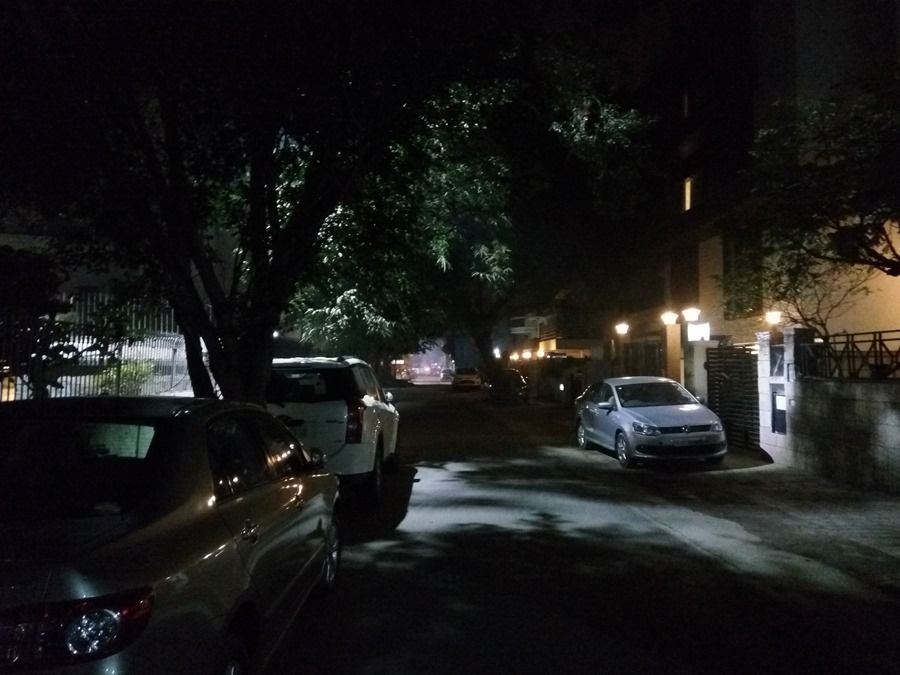 A deserted, dimly-lit residential street forms the eerie subject of our night shot, and the image quality sticks to that rather bleak-sounding introduction. The shot is usable, but we can’t say we were left impressed as it’s riddled with noise and appears soft as well. On the positive side, some colour can still be made out, such as the green on the trees. 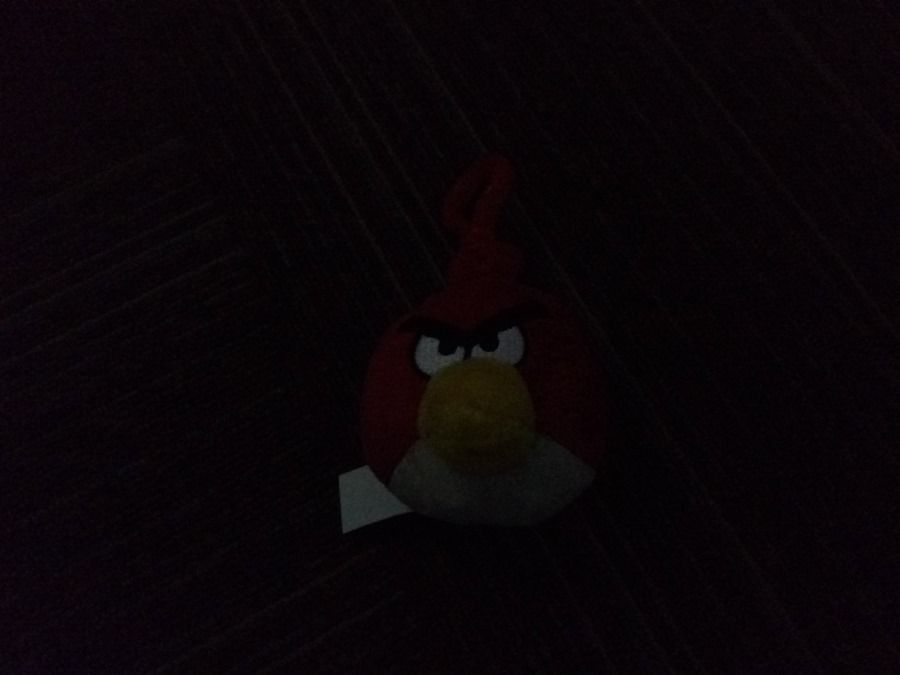 Taking the action indoors, we get our angry bird to pose again for us and shoot it in very dim light. The results look usable again, but the graininess and softness can’t really be avoided it seems. Again, we do appreciate the fact that the colours can be discerned easily. 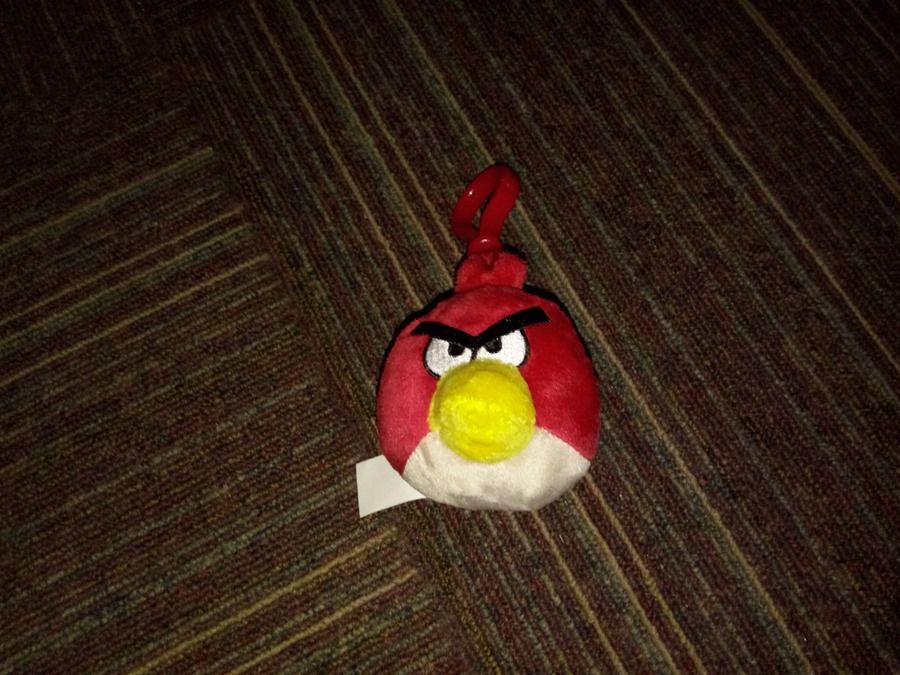 Turning on the true tone flash helps things quite a bit, and we like the way this image has turned out. The scene is nicely illuminated, without burning out the subject and drowning it in light. The colours look good, and is quite sharp too.

Overall, we think the Lenovo VIBE K4 Note’s camera should suffice for most users. As we mentioned, the images look lightly washed out on occasion and low-light images are quite soft and noisy, but otherwise, you should be able to get reasonably good results from it. Our full review, in the factory as you read this, will evaluate its prowess as a daily driver and go deeper into its capabilities in terms of all aspects like performance and battery life.