91mobiles.com
Home Comparisons Mi 10i vs OnePlus Nord: which mid-ranger is the better value for...
Highlights 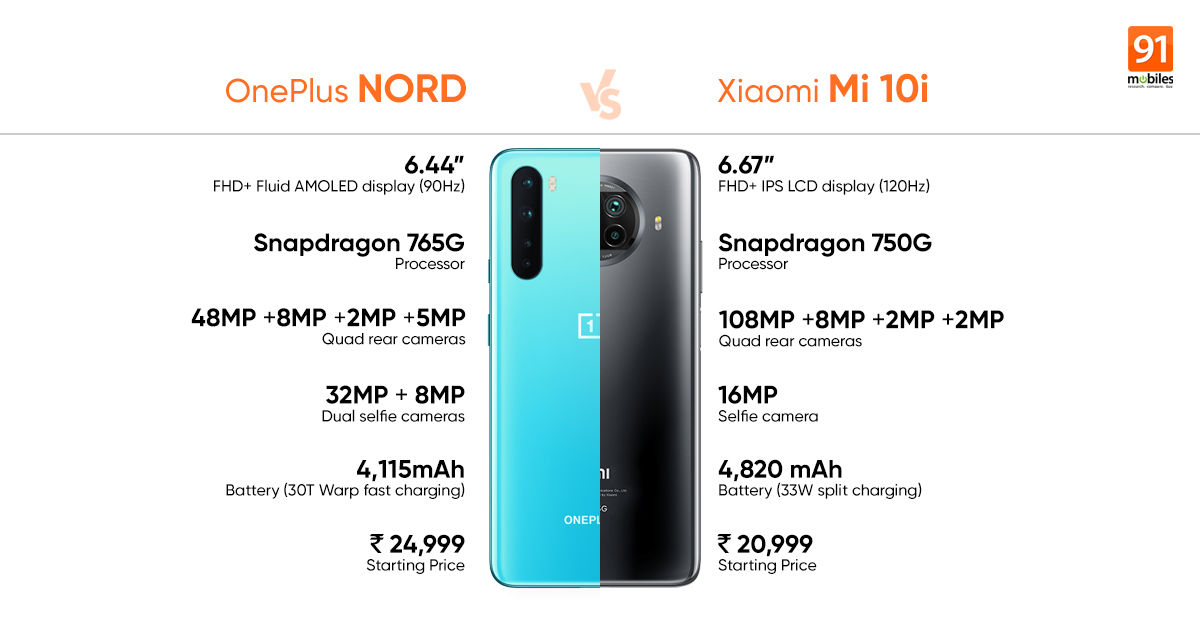 The Mi 10i India launch event earlier today saw the launch of Xiaomi’s affordable 108MP camera phone. But even beyond the camera, the Mi 10i appears to be an excellent choice for anyone looking for a mid-range device. The smartphone is available in three RAM/ storage variants and offers good hardware at a great price. Mi 10i specifications are even better than what one of its main competitors, the OnePlus Nord, offers. With better hardware and a lower price tag, the new Xiaomi Mi 10i could be the best mid-range smartphone to buy. To better understand the differences between the two, we’re going to compare the Mi 10i with the OnePlus Nord and find out which offers better value for money. We will take a look at the Mi 10i price in India, specifications, and design with those of OnePlus Nord to see the differences between them. Let’s get started.

OnePlus Nord vs Mi 10i price in India

OnePlus Nord vs Mi 10i design

Before we get into the specifications, let’s take a look at the Xiaomi Mi 10i design. The phone has a dual-tone back panel with gradient design and a punch-hole display with thin bezels for the display. It also features a circular rear camera module that has four sensors. OnePlus Nord also has a similar story when it comes to design. It also has a punch-hole display with dual front cameras and thin bezels, but the rear camera module has a pill-shaped design. The Nord is available in a rather plain looking rear panel that’s definitely not as attractive as the Mi 10i. Depends on which style you prefer, both phones are good-looking and premium.

OnePlus Nord vs Mi 10i specifications

Coming to the Mi 10i specifications, this is where the phone shines and screams better value when compared to the OnePlus Nord. While the OnePlus device gets a slightly more powerful Snapdragon 765G 5G chipset and up to 12GB RAM, the Xiaomi Mi 10i comes with the Snapdragon 750G 5G processor and a maximum of 8GB RAM. Both the devices are more than capable of running all games smoothly, and will not face any issues with multi-tasking.

And that’s pretty much the only area in which OnePlus Nord may have a slight advantage over Mi 10i. The rest of the Mi 10i specifications are better than what you get on the Nord. Xiaomi Mi 10i comes with a 6.67-inch FHD+ IPS display with AdaptiveSync 120Hz refresh rate. It also features a quad rear camera that consists of a primary 108-megapixel Samsung HM2 sensor, an 8-megapixel ultra-wide sensor, and dual 2-megapixel sensors for depth and macro features. For selfies, there’s a 16-megapixel front-facing camera. The phone also houses a 4,820mAh battery that supports 33W fast-charging and features a side-mounted fingerprint scanner, an IR blaster, and runs Android 10 based MIUI skin.

On the other hand, the OnePlus Nord has a 6.44-inch AMOLED 90Hz display with FHD+ resolution and a smaller 4,115mAh battery with 30W fast charging support. The Nord also gets a quad rear camera setup but with a smaller resolution 48-megapixel primary sensor. This is accompanied by an 8-megapixel ultrawide unit, a 5-megapixel depth sensor, and a 2-megapixel macro unit. The front of the phone houses a 32-megapixel primary camera along with an 8-megapixel ultrawide for selfies and video calls. The phone features an in-display fingerprint scanner and runs OxygenOS based on Android 10.

Wrapping up this comparison, you can clearly see that the new Xiaomi Mi 10i is a better deal, at least on paper. You’re saving some money, and you’re getting more features, a larger battery, a bigger and higher refresh rate display, a higher resolution camera, and a better-looking phone, when you buy the Xiaomi Mi 10i. Of course, the OnePlus Nord isn’t a bad phone at all, but the Mi 10i seems to be the better bang for your buck!