Home Mobiles Micromax In Note 2 review: a stylish budget phone with some limitations 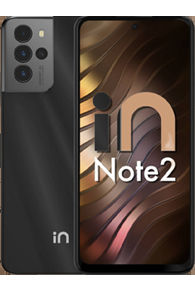 Indian smartphone maker Micromax has been attempting to make a mark for itself in the face of strong Chinese competitors in recent times, and just last year it decided the time was right to make a comeback of sorts. The brand launched a bunch of smartphones over the past few months, and the In Note series stands as a noteworthy salvo in the affordable space. Now, it’s back with a successor that comes in the form of the In Note 2. Priced at 13,490, the phone offers decent hardware including an AMOLED display and MediaTek’s Helio G95 SoC. Time to find out how well the In Note 2 fares in daily use. 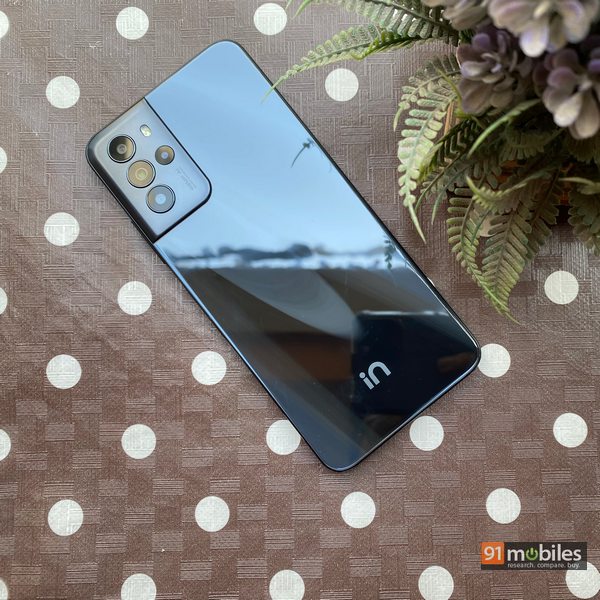 The Micromax In Note 2 is let down by its average camera performance and poorly tuned AMOLED panel, both of which the company has marketed as the phone’s biggest strengths. The battery life is not that great, but the performance is satisfactory. The phone also wins style points for its design language which adds a bit of panache and also the clean stock Android experience.

From the back, the In Note 2 looks quite similar to Samsung’s Galaxy S21 (review) series. The camera housing has that Contour Cut design which merges with the frame seamlessly although the build materials, understandably, are nowhere near as good as Samsung’s flagship phones of 2021. Micromax has gone with a glossy plastic finish on the back which does look good but accumulates a ton of smudges. A slightly boxy design greets my hand with a light in-hand feel while the bottom and top edges are curved. The In branding and a quad-camera setup complete the phone’s rear panel while the bottom holds a 3.5mm headphone jack, USB C slot, and a speaker grille. On the side, there is a fingerprint sensor that has been integrated with the power button and above that is a single bar for volume control. Overall, the design, while being extremely reminiscent of the Galaxy S21, is eye-catching and certainly works in favour of the device. 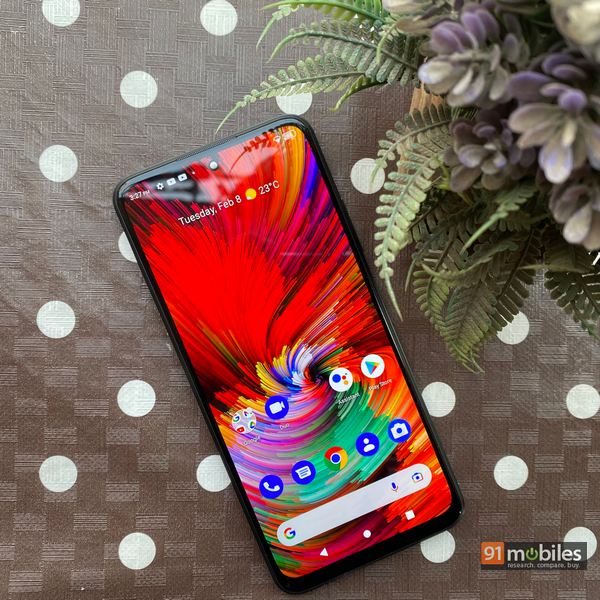 As for the display side of things, the In Note 2 employs a 6.43-inch AMOLED panel with FHD+ resolution and 60Hz refresh rate. After a thorough inspection of the visuals on offer, I can say that Micromax’s implementation of the panel is not flawless. The display has an unsettling blue-ish tint by default which is exacerbated by applying the Vivid colour theme in the settings. Even with the customisation option, the resulting display quality is either too warm or cold. I can understand the lack of a higher refresh rate panel owing to the screen’s OLED nature but putting in at least a 90Hz screen would have worked better for the device. Apart from that, the display does get plenty bright in sunny conditions and there is WideVine L1 certification available for HD content on OTT platforms. I do think the bezel on the bottom could’ve been trimmed but the minuscule punch-hole with no backlight bleeding makes up for it. 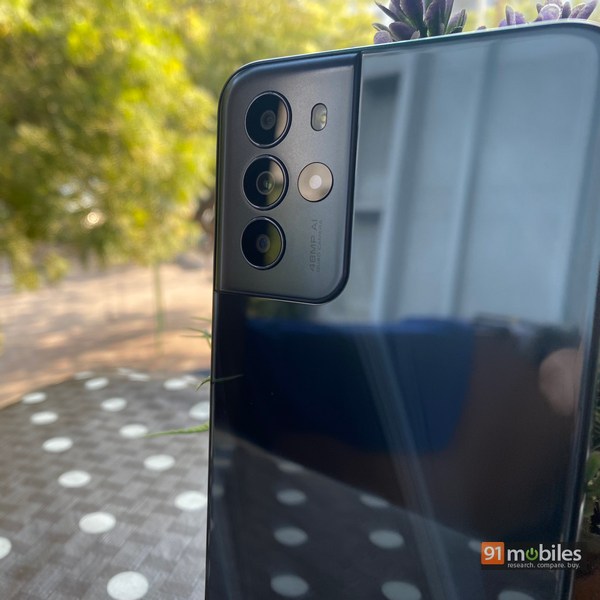 Moving on to the cameras, the In Note 2 has four of them of which the 48MP shooter is the primary one. The rest include a 5MP ultra-wide, a 2MP macro, and 2MP depth shooters. Overall, the Note 2 is not a very proficient image-taking machine even by budget standards. Phones like the Redmi Note 10 (review) and Realme 8 (review) series have set the bar so high that it looks tough for the In Note 2 to compete. Daylight shots do not stress the phone much but the shutter speeds are slow and account for a lot of blur in the images. Dynamic range is spotty and focusing is achieved well by tapping on the screen. Detail-wise the shots are fine, but show a lack of exposure in the shadowy areas. In indoor lighting conditions, the ultra-wide camera’s viewfinder is akin to something I previously saw on VGA cameras and the images it takes are only slightly better. Background separation for portrait mode shots is average while the macro images are underwhelming. Low light photography is in the same boat with poor colour reproduction and exposure handling although I did see marginal improvements when employing the dedicated night mode. Lastly, there is a 16MP selfie camera onboard which takes decent shots when the lighting is right but there is the tendency to overexpose every now and then. The tried-and-tested MediaTek Helio G95 is running things on the In Note 2 and while its processing capabilities are satisfactory, the power efficiency of the 12nm build is underwhelming. As a normal everyday device, the In Note 2 doesn’t leave much to be desired with smooth app switching, lag-free social media browsing, and light Chrome usage. More GPU-centric tasks do take a toll on the device, such as BGMI gaming at anything above 45fps with graphics set at Smooth. There is 4GB of LPDDR4X RAM to contend with which should be enough to keep at least a few heavy apps open in the background. Apart from that, there is also 64GB of UFS 2.1 storage that can be expanded to 256GB using a microSD card slot. 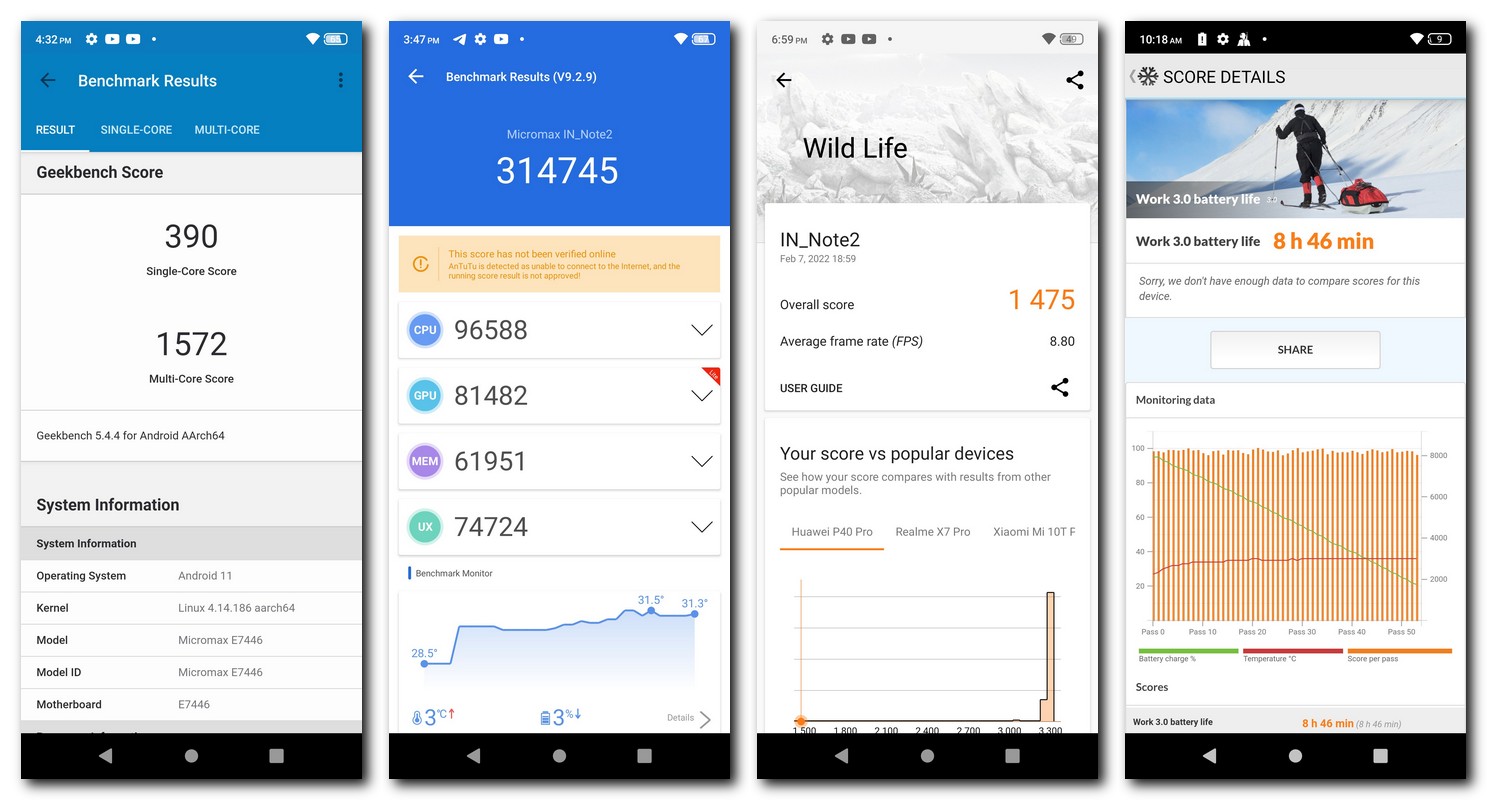 A single speaker unit is present on the bottom and delivers loud but average sound quality. The fingerprint sensor is snappy and authenticates accurately on most occasions. Jio’s 4G LTE service worked effectively in terms of mobile data and calling. As for the software, Micromax is employing a complete stock Android skin which gives the UI experience a very clean look and also makes it user-friendly. My concern only lies with how frequently Micromax is going to provide software updates. 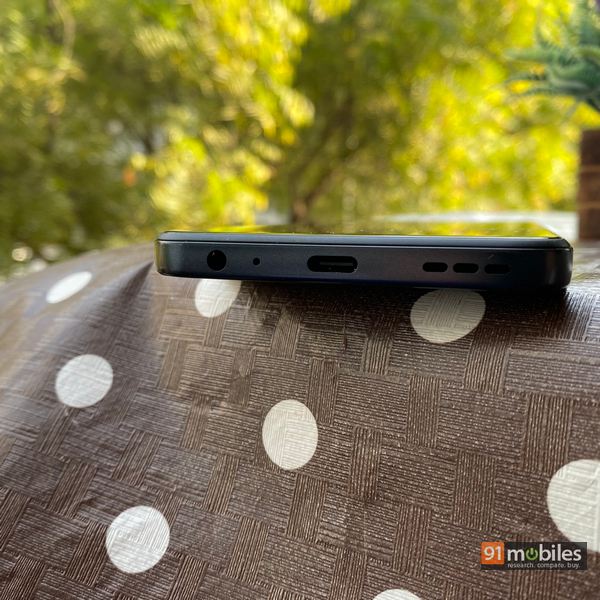 The battery on the Micromax In Note 2 is a standard 5,000mAh Li-Po cell that can be fast-charged at 30W. There was nothing spectacular about the In Note 2’s battery life. In fact, on PCMark’s Battery 3.0 test the device scored just 8 hours and 46 minutes. My usage of the device yielded about 5 hours of screen on time at about 60 percent screen brightness, which is just about average. The 30W charger provided with the box can fill up the battery in about 90 minutes. 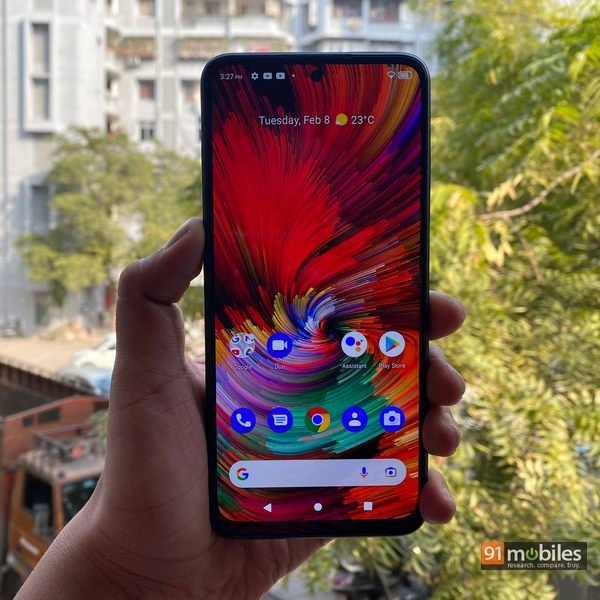 Micromax has leaned in heavily with its use of an AMOLED panel on the In Note 2 but its implementation seems a bit off. Infinix’s Note 11 (review) does a better panel at a lower price point while providing a bigger screen. Drawbacks with the camera quality and rather average battery performance also don’t help the Note 2’s case. However, the eye-catching design along with a light in-hand feel, combined with the clean software experience should find some takers.

Micromax IN Note 2 powered by MediaTek Helio G95 overview: beauty and the brains!