The phone industry in the year 2017 will be known for dual cameras, phones with minimal bezels and rise of smarter phones with the infusion of Artificial Intelligence. But amidst these trends, the year will also be remembered for 4G connectivity becoming more affordable and the Reliance JioPhone (first impressions). The much-anticipated 4G-enabled feature phone was announced on July 21st by Mukesh Ambani and it opened the floodgates for other such offerings priced below Rs 3k, promising fast data connectivity for cheap. Among these rivals is the Micromax Bharat 1 (first impressions) – which in partnership with BSNL – offers a similar premise… a feature phone with ‘smart’ capabilities and an attractive price tag of Rs 2,200. Of course, the question looms large – can it compete with the JioPhone and make a space for itself in this new segment? Well, let’s find out in this review. 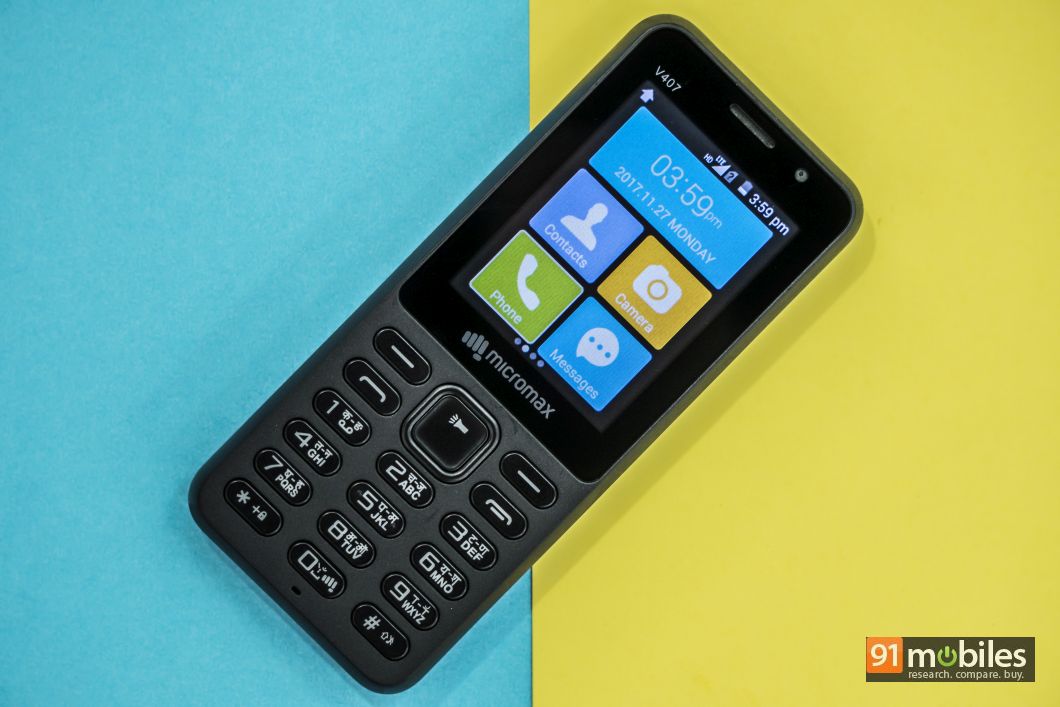 Let’s get the riders out of the way (which in this case aren’t convoluted). The Micromax Bharat 1 will set you back by Rs 2,200 as a one-time cost – there’s no portion of the price that will be refunded after a certain period. This is certainly a great draw for the Micromax’s offering as the riders attached with the JioPhone say that it needs to be recharged for a minimum value over a three-year period. But the Bharat 1 does come with BSNL’s bundled offer – and that’s simple enough to understand – for Rs 97, you get 500MB data per day and unlimited voice calls for a month. 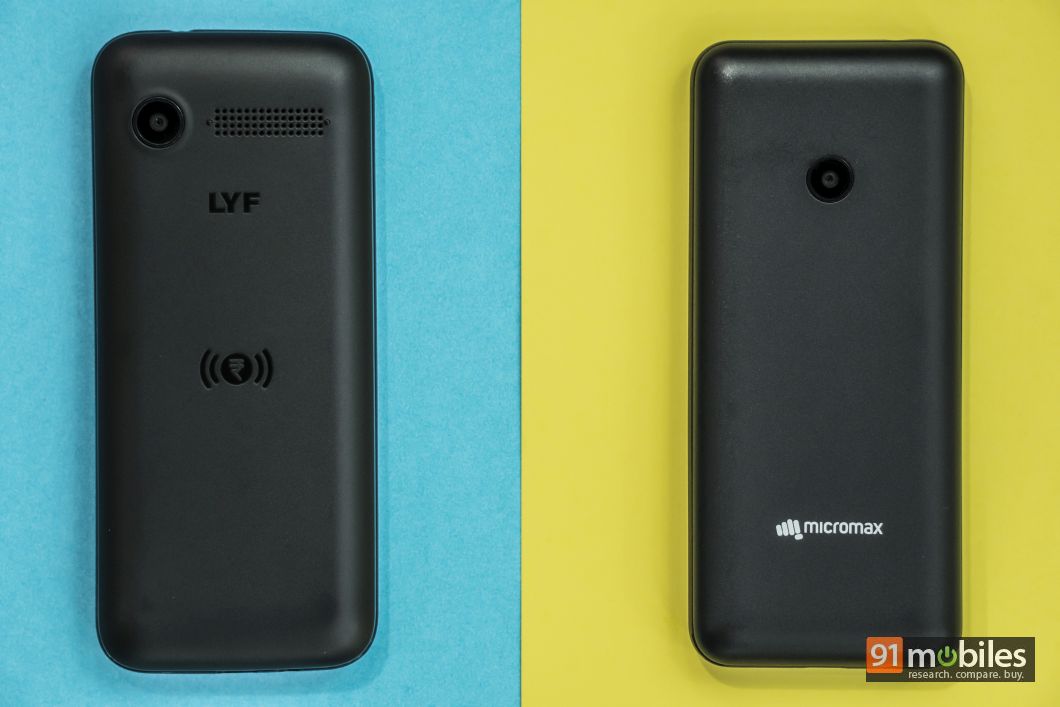 What makes the partnership between Micromax and BSNL all the more exciting is the fact that you’re not forced to use the telco’s service for a certain duration. Add to it the fact that the Bharat 1 isn’t network-locked, and the device becomes a better proposition than the JioPhone. The dual-SIM Bharat 1 supports 4G VoLTE on the primary slot (worked fine on Airtel’s and Jio’s networks in our testing), while the secondary slot only supports 2G / 3G standards.

As you can see, it’s not much different from other feature phones available in this segment. Though it’s interesting to note that the device comes powered by Qualcomm’s Snapdragon 205 platform – which also fuels the JioPhone (some phones utilise the Spreadtrum chipset). Additionally, the phone scores full marks when it comes to the connectivity options on offer – Wi-Fi, Bluetooth and even GPS.

The externals: design and display

The Micromax Bharat 1 doesn’t depart from the design ethos of a typical feature phone. Up front, you get a 2.4-inch colour display with a T9 keypad along with a D-Pad for navigation. It can be held in the hand easily and is lightweight too, thanks to the plastic body. That’s not to say that it doesn’t seem sturdy – while we haven’t dropped it ourselves, it should easily be able to take a fall or two without any issues. 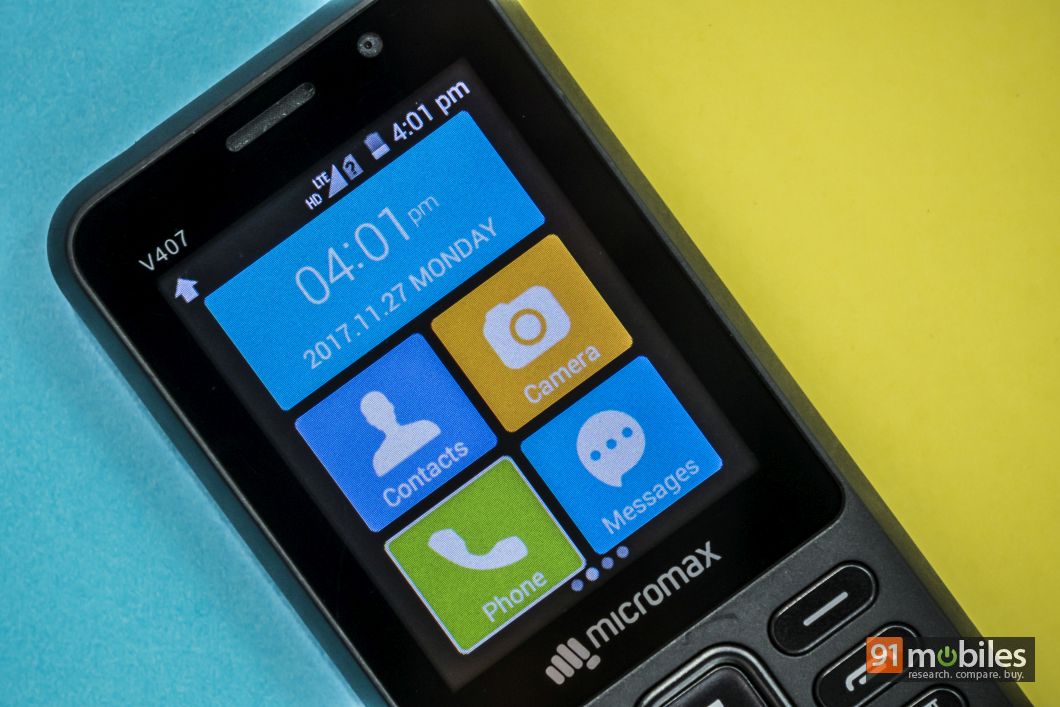 The 2.4-inch display bears a resolution of 240 x 320 pixels, and seems to offer a decent levels of sharpness. However, the colour reproduction seems quite dull and viewing angles aren’t the best either. Brightness levels however, are good and we didn’t find any issues in using the Bharat 1 under harsh sunlight. 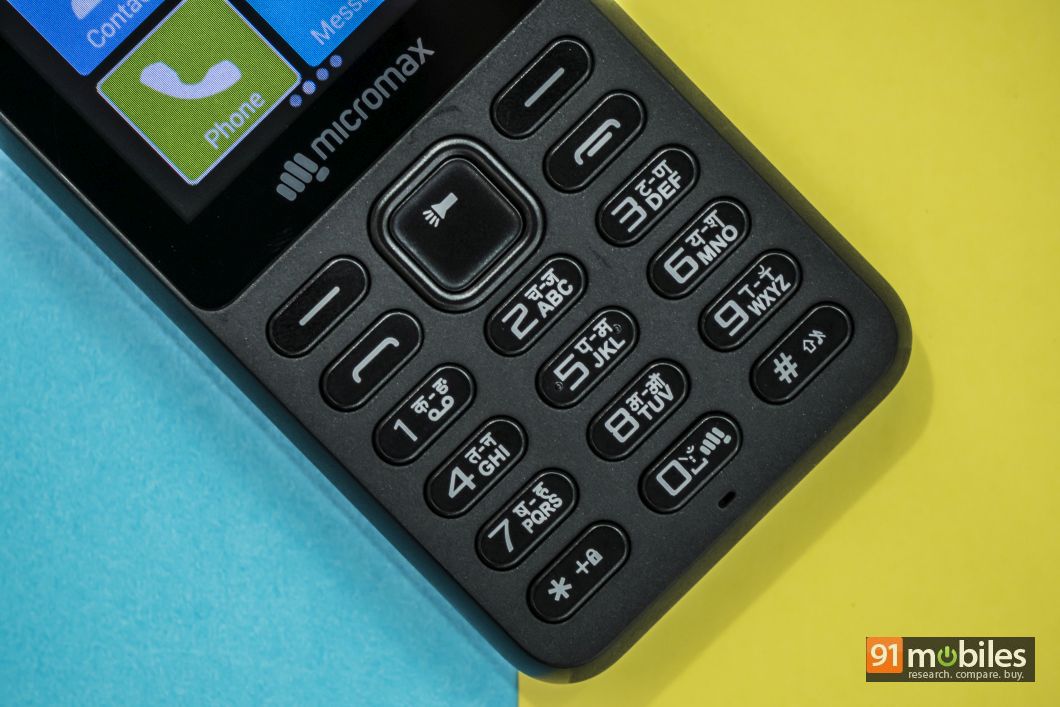 The keys on the keypad are made from plastic, seem flimsy and don’t inspire much confidence about their quality. That said, they work like a charm and if you’ve ever used yesteryear’s phones offering T9 keys, you’ll get used to them quickly. The purpose of the keys above the numeric keypad is easy to understand and the D-pad in the middle is handy for navigation. You can use it to scroll through the apps or contacts. The button in the centre lets you toggle the torch on the Micromax Bharat 1. It’d have been great if the D-pad could offer shortcuts to apps or settings as well, like many other features phones.

In terms of the button and port placement, the earpiece on the front also double up as speaker, and sitting alongside is a VGA camera. The torch is available up top, whereas both the 3.5mm interface and a micro-USB port is at the base. The rear panel is home to the primary snapper and the minimal attributes are only broken by the Micromax branding towards the bottom. The smooth texture manages to offer a good drop, but does seem slightly slippery when the palms are sweaty. The back cover can be popped open to access the battery along with slots for a microSD card and two nano-SIM cards.

The internals: hardware and software

The Micromax Bharat 1 runs a customised version of Android, which means that the app support should be better (in theory at least), when compared to the JioPhone, which ships with KaiOS. The Bharat 1 offers apps like WhatsApp (needs to be downloaded) and YouTube (sadly it’s the mobile site wrapped inside a browser), which are yet to arrive on Reliance’s offering. The interface is also more user-friendly… with tile-based icons. The homescreen shows the date and time, followed by icons to access Contacts, Camera, Phone and Messages. Scrolling towards the right brings more apps, while the left screen lets you add your favourite contacts for speed dial-like functionality. The phone also comes with Facebook (it needs to be downloaded and is actually the Facebook Lite app), and its browser is powered by Opera Mini. For multimedia, it has a Fun app, which lets you access Live TV, Videos, Music and Movies. Sadly though, the library isn’t extensive, and navigating the catalogue is quite difficult too. In contrast, the JioPhone’s Jio suite of apps for the same are rich with content and easier to navigate. The Bharat 1 also has audio and video player along with FM Radio. Tools let you access Calendar, Calculator and Clock, while Application has Downloads, File Explorer, NotePad and Sound Recorder. 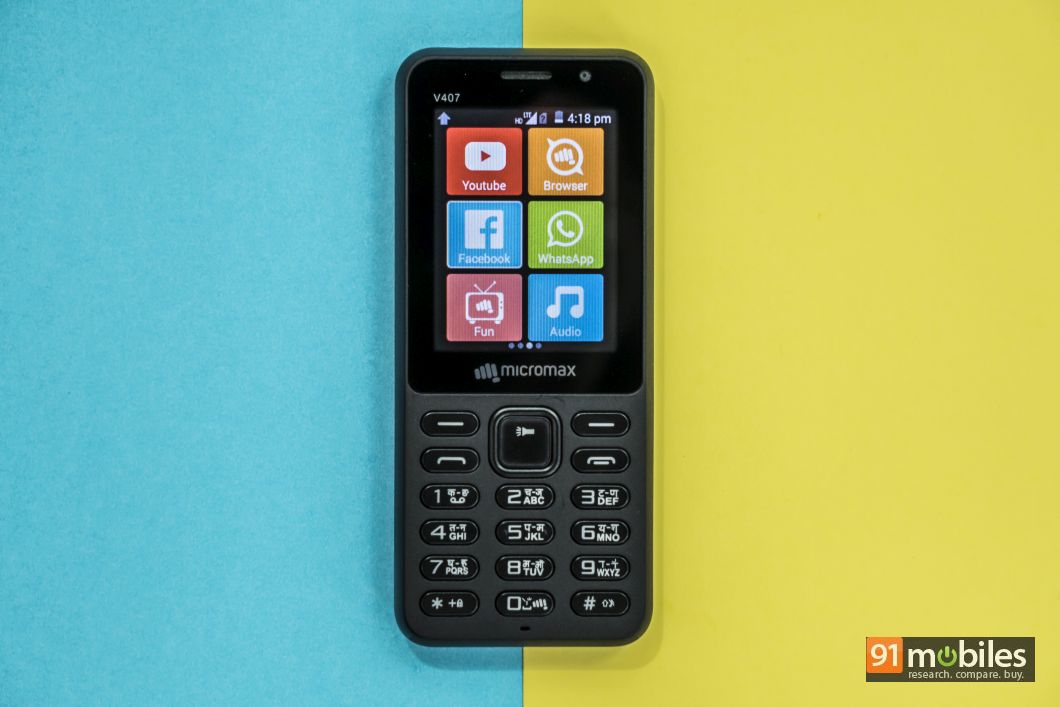 Hitting the settings menu brings up all the options, and just like any other Android phone, they’re segregated into different categories. As much as we liked that Micromax has opted for Android, it doesn’t mean that you’ll be able to enjoy its flexibility. The Indian brand has disabled many of its abilities on the Bharat 1, including the capability of installing apps by side-loading APKs.

The device is a smooth performer though, thanks to the SD205 chip mated to 512MB RAM. Since there are limited things you can do on the phone, it seems adequately fast, but there’s definitely a slight delay between clicking on an app and it opening. For storage, the Micromax Bharat 1 comes with 4GB of flash memory, out of which around 2GB is available to the end user. Of course, the good thing is that you can extend the storage by up to 128GB via the dedicated microSD card slot.

Another edge that the Micromax Bharat 1 has over the JioPhone is the Wi-Fi hotspot functionality. That means you can use the phone as a Wi-Fi dongle and let other devices connect to the internet.

While the feature phone shouldn’t be considered for photography, it does sport a 2-megapixel snapper at the back and a VGA shooter on the front. The viewfinder on the Bharat 1 is quite minimal, and there are no modes either. You can press the centre button on the D-Pad to click the photo, and also zoom in or zoom out or toggle to the video recording with the direction pad. Going to the menu lets you tweak white balance or exposure. Quality-wise, the images might seem fine on the phone’s display, they’re barely usable. The images have noticeable grain and colours don’t seem natural either. The story continues with the front-facing camera too.

Fuelling the Micromax Bharat 1 is a 2,000mAh battery which manages to ensure a couple of days of backup. With some calls and browsing, it easily lasted us around two days. That said, if you use the hotspot functionality, then the battery drain is faster. 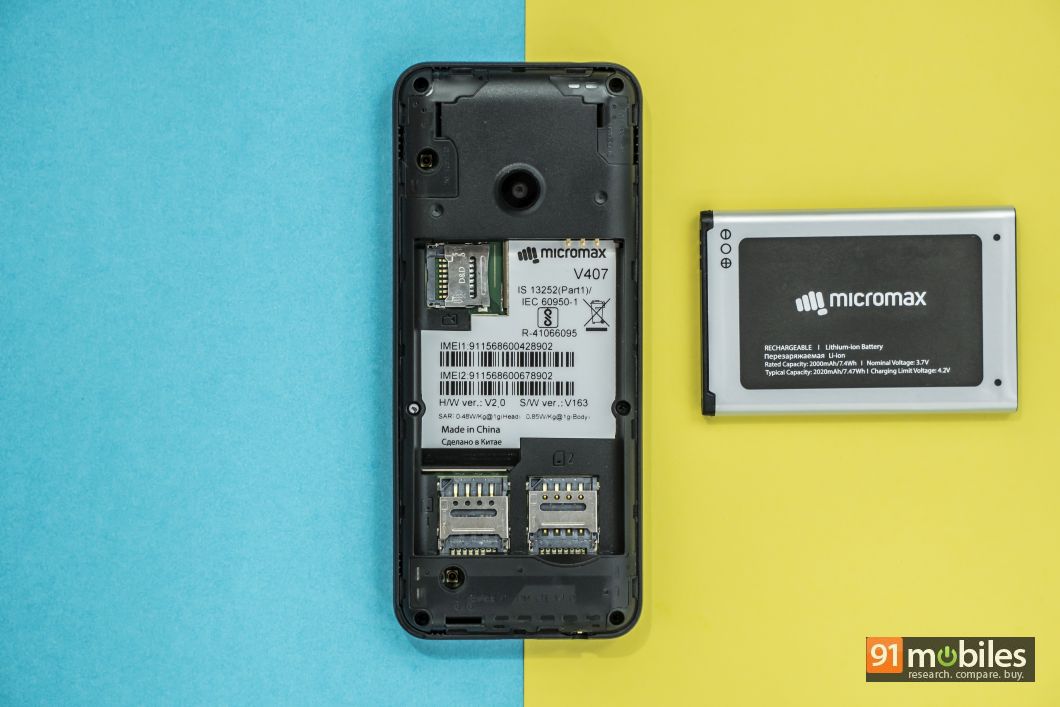 The Reliance JioPhone has started a ripple effect across the telecom and mobile phone industry. Using 4G is not only more affordable now, but accessing high-speed internet and high-def calls doesn’t require you to empty your pockets. However, the phone has a lot of hidden riders attached as the Mukesh Ambani-owned company has a vested interest to ensure that consumers use Jio’s network as well. Of course, there are many other options in this segment that offer users an affordable gateway to the internet. Airtel has partnered with different phonemakers like Karbonn and Celkon to offer smartphones at a similar effective price, but those also need to be recharged for a certain amount over three years to give you the actual benefit of the attached cashbacks. 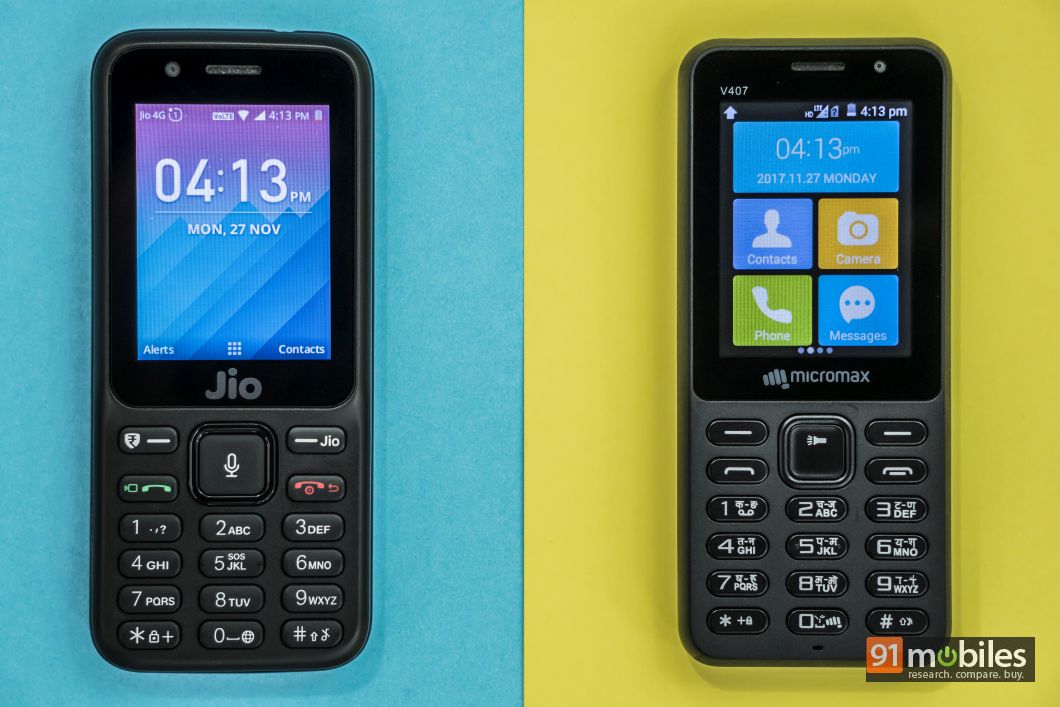 In comparison, the Micromax Bharat 1 comes as a perfect choice for those who are looking for a no-nonsense 4G VoLTE capable feature phone that can be used with any network and doesn’t require you to do regular recharges to get cashbacks either. So whether you are a first-time user looking for an affordable 4G device or looking for a secondary phone as backup, the Bharat 1 could prove to be a worthy, inexpensive option.