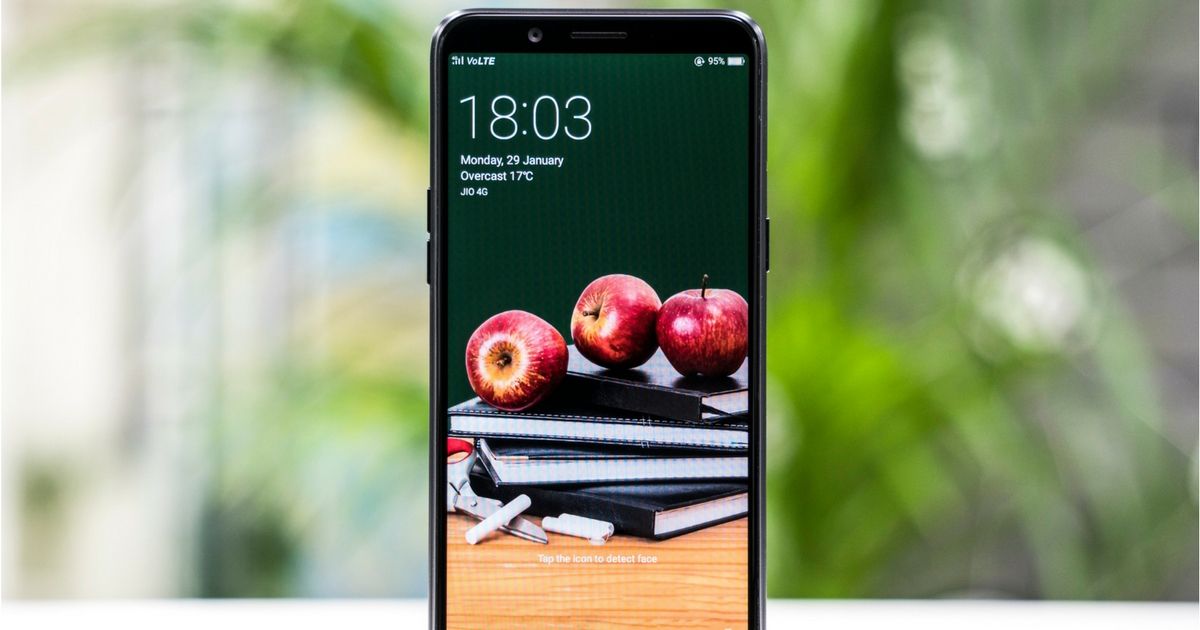 With its last launch – the F5 – Chinese smartphone brand OPPO joined the trend of taller displays. Priced at Rs 19,990, the OPPO F5 (review) was among the very few smartphones in its segment to offer an 18:9 display. Furthermore, the brand infused the selfie camera with artificial intelligence to offer better results. Now, the company is aiming to offer this combination for even cheaper with the OPPO A83 (first impressions). But is that enough to set the device apart from the other impressive options available in its segment? That’s what I’m here to find out today. 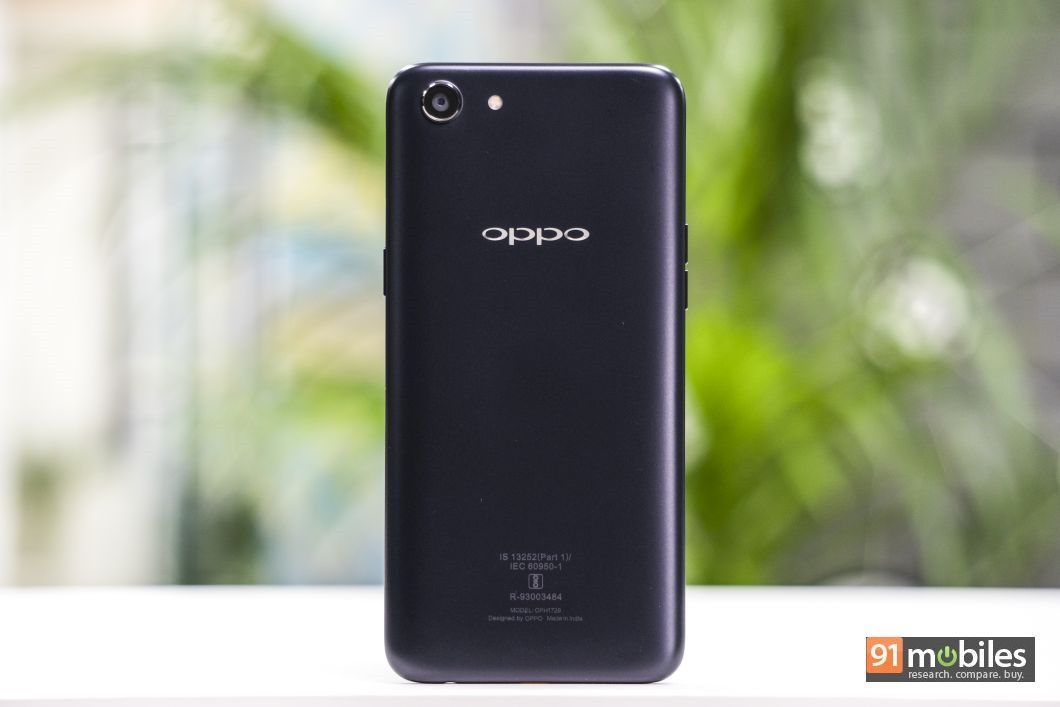 The OPPO A83 isn’t much different from its sibling, the F5 – save for its comparatively smaller footprint. Instead of a large 6-inch display, the latest from OPPO offers a 5.7-inch screen. Considering the phone has smaller bezels along the sides, and some bezels on top and the bottom – the dimensions of the device are similar to a 5.2-incher… making it extremely easy to operate single-handedly. Adding to the ergonomics is the curved rear and rounded corners. At 7.7mm, the handset is fairly slim. 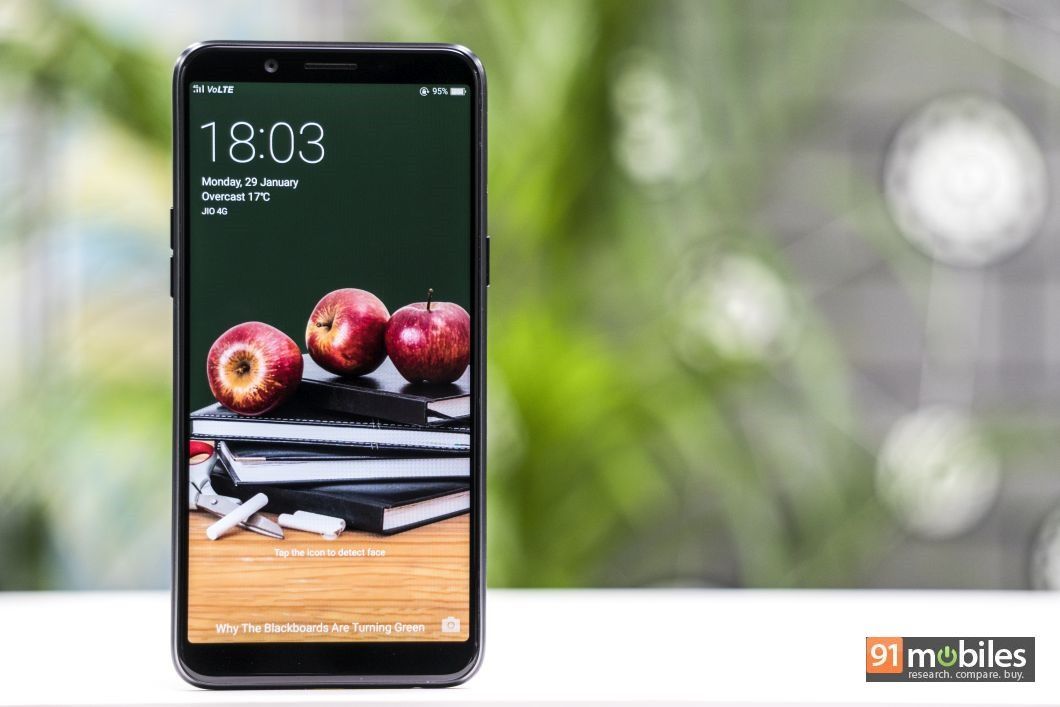 While the A83 looks the same as the OPPO F5, it doesn’t feel as robust, and that’s because it’s constructed out of polycarbonate and not aluminium. While that makes it quite lightweight at 143g, it doesn’t seem as premium compared to its peers. Our review unit came in black, though you can also opt for the shinier gold version. Sadly, the back of the phone has a smooth finish which gets slippery. However, the good thing is that the device comes bundled with a protective cover that manages to offer good grip thanks to its textured pattern.

When it comes to the placement of the controls and ports, the OPPO A83 follows norms. Though it must be noted that the clicky sounds made by the power button on the right spine and volume controls on the left doesn’t offer much confidence about their quality.

One feature missing on the A83 is a fingerprint reader, and that’s because the phone is equipped with face recognition. The latter works well, except when it doesn’t. What I mean is that with decent lighting and proper alignment with the face, the phone unlocks almost instantly. But in dim settings or when the phone is placed at a different angle instead of the front, it wasn’t able to detect my face. In fact, there were some instances when the feature didn’t work even in ample lighting conditions. That said, unlocking is faster than some other face recognition-toting smartphones. Still, I think OPPO should have have included a fingerprint scanner since that’s an easier, faster and more reliable option. 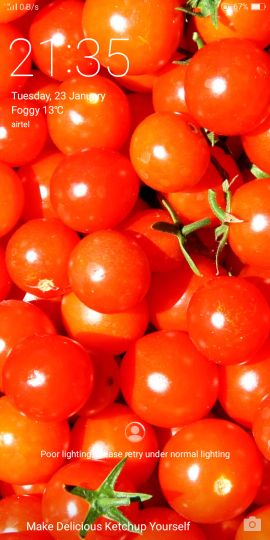 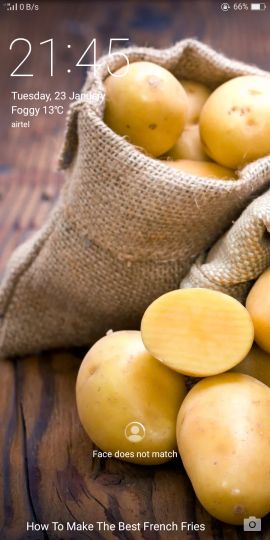 The display panel on the A83 is slightly raised from the body, which might look good, but also makes it more susceptible to damage in case of a fall. It’s good to see a pre-pasted screen protector on the smartphone though. The 5.7-inch IPS screen bears a 18:9 aspect ratio with a resolution of 720 x 1,440 pixels. While the screen looks plenty sharp and colours are also vibrant, the display is quite reflective. This makes it difficult to read in harsh outdoors. For imagery, OPPO’s latest features a 13-megapixel snapper at the rear and an 8MP shooter at the front. Interestingly, even with a single camera module, the app offers a 2x zoom capability (akin to digital zoom). Other options available in the camera interface are beauty, time-lapse, expert mode, and more. The viewfinder also offers a number of live filters, and the ability to watermark the images. The front camera lets you capture selfies with a depth-of-field effect. 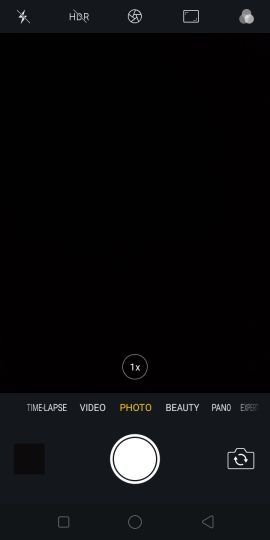 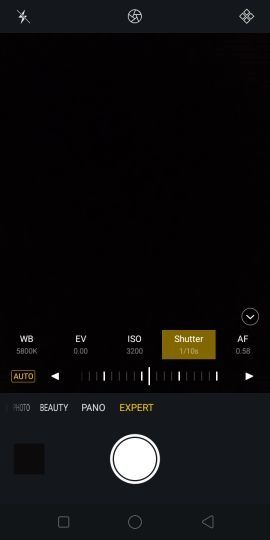 In terms of the quality, the images might seem pretty good on the smartphone, but that’s not the case when you view them in their original size. The pictures lack detail, and while colour reproduction is natural, it doesn’t really seem vibrant. This is especially apparent in landscape shots. Close-up images in comparison, are quite good because they show a slight depth-of-field effect, though grains are visible in this case too. The dismal performance continues in indoor situations and dim lighting.

Selfies on the other hand, are better, even across different situations. Thanks to the screen flash, you can click them even in poorly-lit settings, and the portrait mode is also quite effective. However, we can’t really tell if AI makes a big difference or not. But the biggest issue is that the front camera struggles with exposure when there’s harsh lighting in the background

Software-wise, the OPPO A83 boots Android 7.1.1 Nougat with its proprietary ColorOS. Like previous offerings from the brand, the UI comes with a unified homescreen and app drawer. It doesn’t feature much bloatware, except apps like Facebook, UC News and Amazon Shopping. However, frustratingly, it continues to keep the notification shade and quick settings panel separate. While the former appears using the usual swiping-down gesture, one needs to swipe upwards to access the quick toggles. 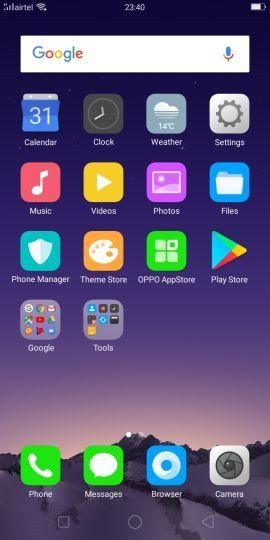 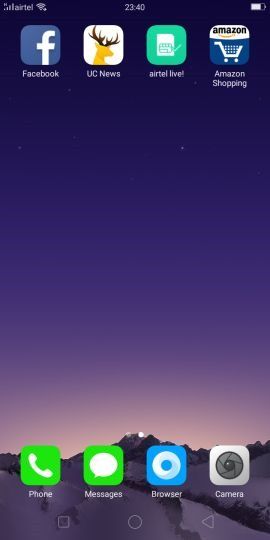 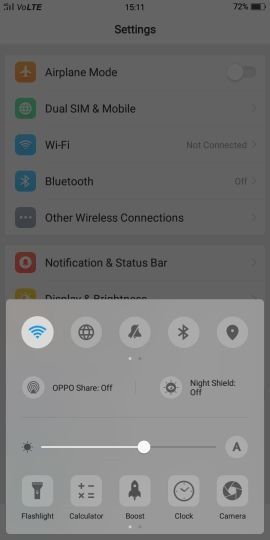 To ensure that the smartphone functions smoothly, the company has powered the A83 with the MediaTek Helio P23 SoC. The octa-core chipset runs all its eight cores at 2.5GHz. And it works really well, both for basic menu navigation and switching between apps. There are a few minor jitters due to UI animations. Strangely however, even with 3 gigs of RAM, the device seems to have issues with multitasking. While it can run multiple apps simultaneously, it doesn’t seem to hold more than 10 apps in memory for a long duration. Having said that, the A83 surprised with its gaming performance as it offered a delightful experience while playing Marvel’s Contest of Champions and Asphalt 8: Airborne. More importantly, the phone didn’t heat up even after long sessions. 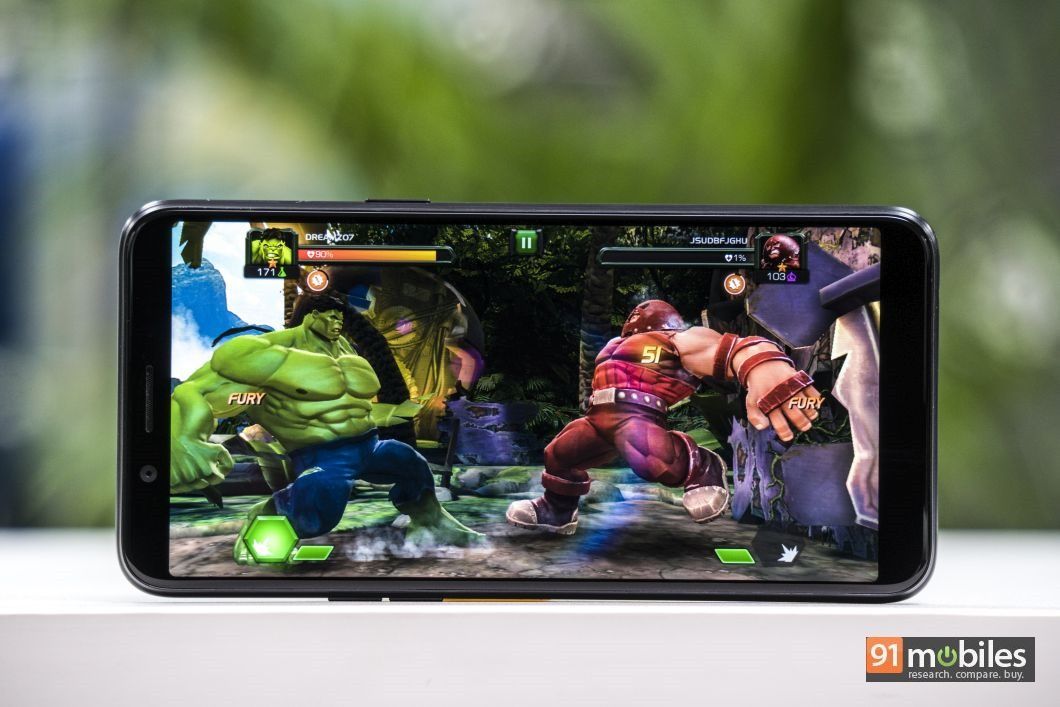 The OPPO A83 ships with 32GB of storage onboard, out of which consumers get around 21.5GB for their use. You can extend it further with the use of a microSD card of up to 256GB. 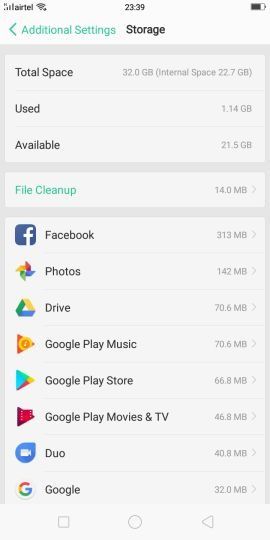 Fuelling the A83 is a 3,180mAh battery, which manages to last long on a single charge. Even with my heavy usage comprising 30 minutes of calls, GPS for navigation, 4G data, listening to podcasts, watching movies and a little bit of gaming, the smartphone still had some juice left at the end of the day. This corresponds with the 91mobiles battery test as well, wherein we run a 720p video on loop with everything turned off except for cellular network, and both brightness and volume levels set at 50 percent. The handset battery lasted a little more than 14 hours before giving up.

In sum, the OPPO A83 is a decent offering, but its price tag of Rs 13,990 goes against it. As mentioned in the introduction, the A83 is up against some formidable opponents – right from the feature-packed Xiaomi Mi A1 (review) to the bezel-less Honor 7X (review). Both these phones bring powerful hardware as well as dual cameras at lower price tags. And while the A83 does offer a bezel-free display and AI-powered selfies, these features still aren’t enough to take on the competition. 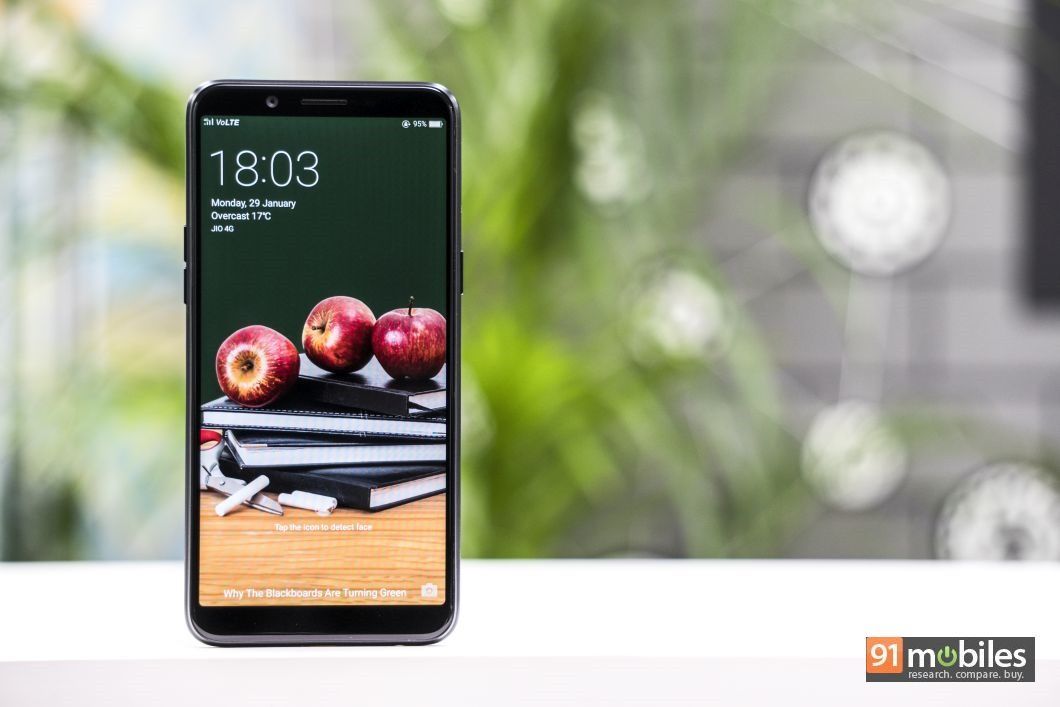 Had the price of the A83 been lower by a couple of grand, the phone could have been a worthy buy. Even in that scenario, it’d have faced strong competition from the likes of the Honor 9 Lite (review) and the Billion Capture+ (review). As things stand right now, it’s hard to recommend the OPPO A83 – not because it’s not capable, but because the competition is simply better. Unless of course, you want to buy a smartphone that’s available easily in a neighbourhood retail store.

Oppo A83 Price
View All
Competitors for Oppo A83
ShareTweetShare