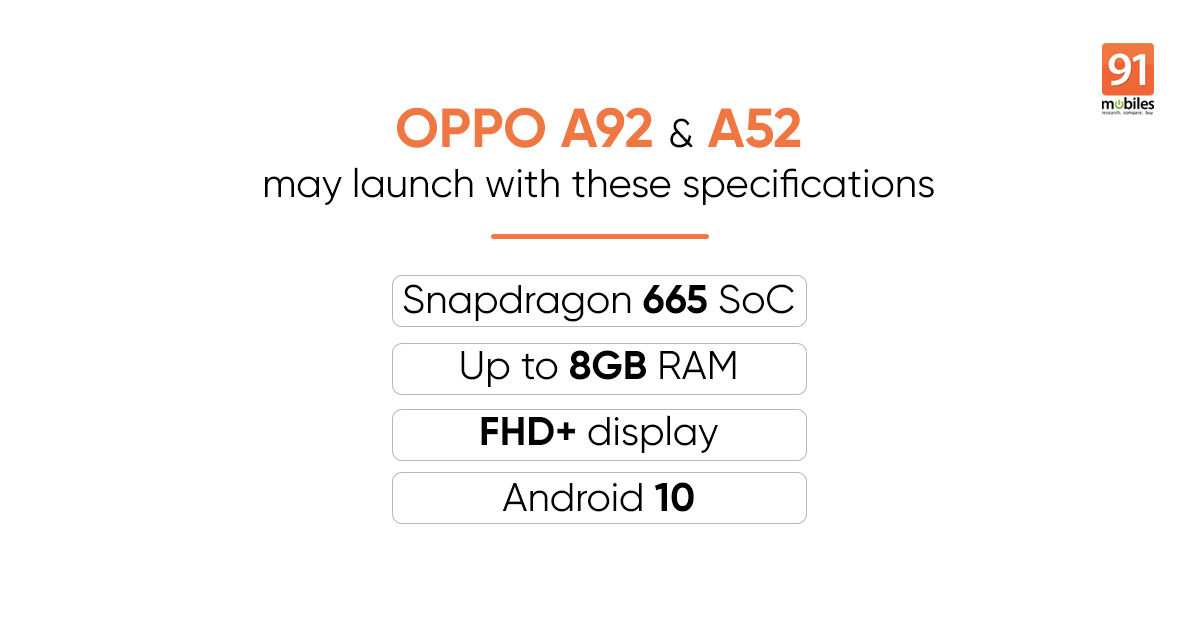 OPPO is gearing up to launch two new A-series smartphones, called OPPO A92 and OPPO A52. Both handsets have appeared on Google Play Console database along with key specifications including the RAM, processor, display resolution, and the software it boots. While this is the first-ever listing of OPPO A52, the OPPO A92 was previously spotted on IMDA as well. Going by the specifications, both OPPO A92 and OPPO A52 seems to be affordable mid-range smartphones with Full-HD+ displays and Snapdragon 600-series chipset ticking at their core. The handsets will most likely run on ColorOS 7 based on Android 10 out of the box.

OPPO A92 and A52 specifications

Based on the specifications listed on the Google Play Console listing, both the OPPO A92 and A52 will tout similar specifications. Google Play Console suggests that the handsets will be powered by the Qualcomm Snapdragon 665 SoC under the hood. This will be paired with 6GB RAM on the OPPO A52 and 8GB RAM on the A92. That’s the only notable difference between the two phones so far. Both the smartphone will run Android 10 out of the box, sport 1,080 x 2,400p resolutions, and come equipped with the Adreno 610 GPU for graphics and gaming. We’re yet to know OPPO A52 and A92 design, display size, camera, and battery capacity

The OPPO A92 and A52 will sport Full-HD+ displays and run Android 10 out of the box.

That’s all we know about the OPPO A92 and A52 specifications at the moment. Since the OPPO A92 has already been certified in Singapore and Indonesia, we can expect its launch in the these markets soon. The smartphone could also make its way to other markets, including India. The OPPO A92 will come as a successor to last year’s OPPO A91 that was launched with a MediaTek Helio P70 processor paired with 8GB of RAM and 128GB storage onboard.