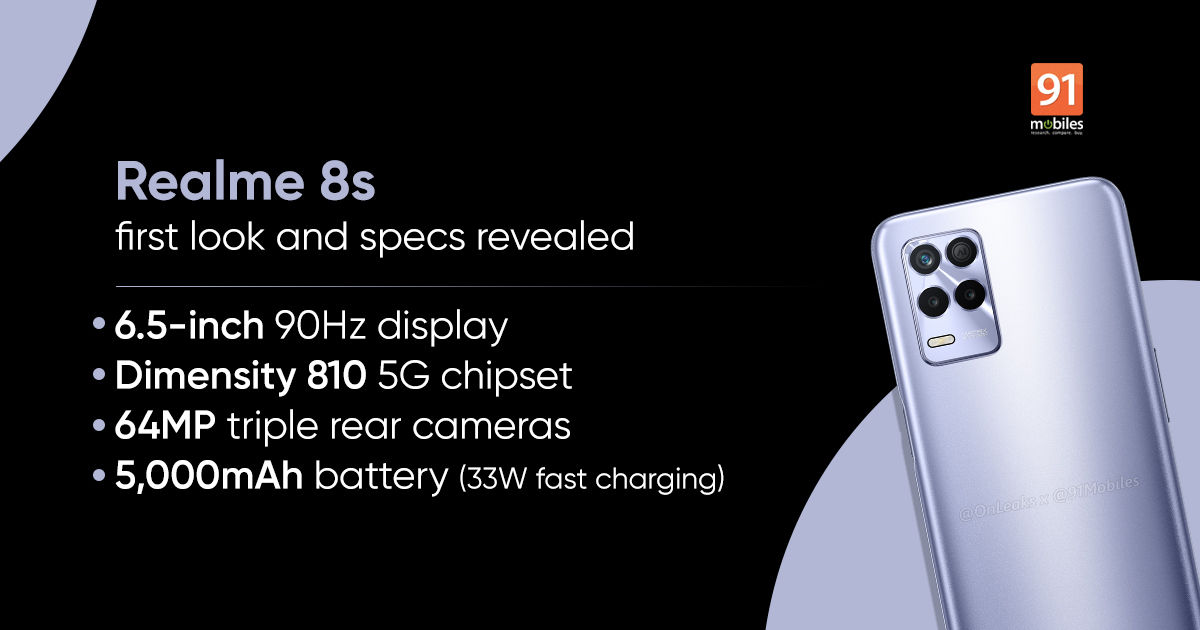 Realme 8s seems to be in the works alongside the entry-level Realme 8i. Both the phones are expected to launch in India soon. This comes after the company had launched multiple models in the Realme 8 series in the country such as the Realme 8, 8 5G, and 8 Pro. Now, 91mobiles in association with noted leakster @OnLeaks, aka Steve Hemmerstoffer, exclusively bring you the Realme 8s specifications and renders, leaving nothing to the imagination. To no one’s surprise, the Realme 8s comes with 5G connectivity and ships with triple cameras on the back and a side-mounted fingerprint sensor.

Realme 8s design is largely identical to other Realme 8-series phones in the segment. It has triple cameras arranged in a square module alongside an LED flash. The volume rocker is on the left, while the SIM card tray and power button with an integrated fingerprint sensor are on the right. The speaker grille, USB Type-C port, 3.5mm audio jack, and primary microphone can be seen at the bottom. The phone in the renders is in purple colour, but there could be other options at launch.

According to information shared with us by @OnLeaks, Realme 8s will sport a 6.5-inch display with a 90Hz display. The phone will be powered by the MediaTek Dimensity 810 SoC and will have 5G connectivity. The chipset will be paired with 6GB and 8GB RAM options, with an additional 5GB virtual RAM. For those unaware, virtual RAM utilises a portion of the internal storage for better multitasking. The Realme 8s will have 128GB or 256GB storage variants, but isn’t confirmed at the moment. The phone will boot Android 11 OS with Realme UI 2.0 custom skin.

As for the optics, the Realme 8s has a triple camera setup on the back, with a 64MP primary sensor, but details regarding other sensors remain a mystery. It is said to have a 16MP snapper on the front for selfies and video chats. The phone has a 5,000mAh battery with 33W Dart fast-charging support and a side-mounted fingerprint sensor for security. The Realme 8s is tipped to come with a USB Type-C port for charging and a 3.5mm audio jack.