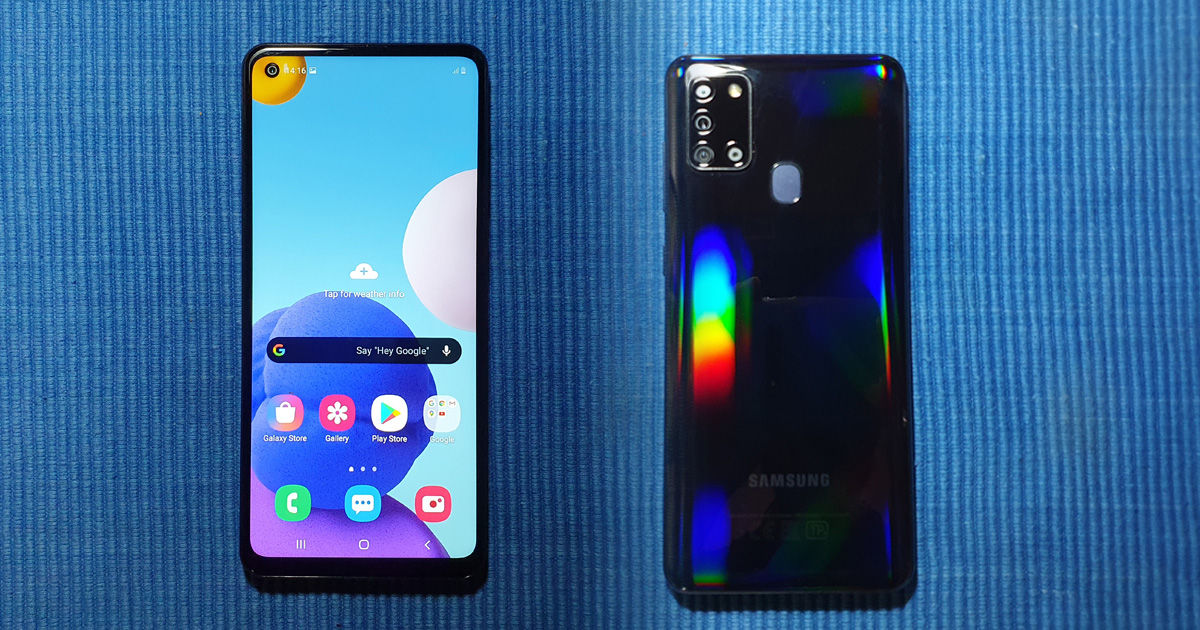 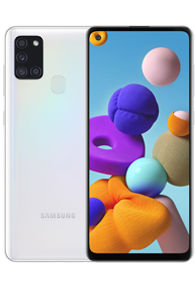 The Galaxy A series from Samsung is perhaps the company’s most successful lineup and for good reason. The A series consists of budget and mid-range devices that value, design and features. As it so happens, the Galaxy A50 (review) was one of the most shipped smartphone globally in 2019 as per Counterpoint. Several smartphones are currently being sold under the A series branding in India and the most recent of the lot is the Galaxy A21s. Launched at a price of Rs 16,499, the device falls right into the affordable territory that is dominated by the likes of Xiaomi, Realme, and POCO. In terms of pricing amongst Samsung smartphones, the A21s is slotted between the Galaxy M31 (review) and the Galaxy M21 (review). In this review, I will try and answer the question whether the Galaxy A21s is worth considering or not. 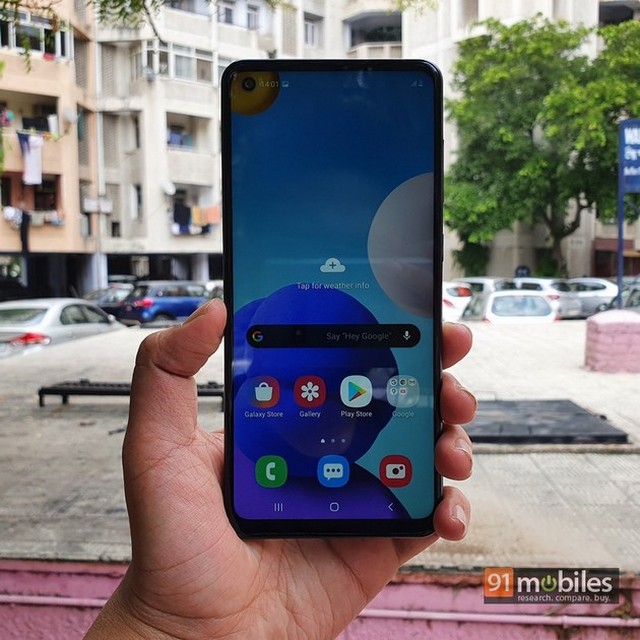 While the Galaxy A21s delivers on many aspects of the smartphone experience at a reasonable cost, its rivals seem to one-up it. Samsung’s own Galaxy M31, a phone priced about the same as the A21s, outperforms the latter in terms of battery and cameras. In my mind, the Galaxy A21s does deserve a second look for its outstanding battery life, but the Galaxy M31 might be a better option to consider.

The Galaxy A21s sports a polycarbonate back, which doesn’t feel cheap but attracts a lot of smudges. Apart from that, the same, prism-like reflecting gradient which we have seen on the likes of the Galaxy A51 and A31 is also present on the A21s. The rounded edges and curved back panel make for an easy grip on the device. The phone does have a slight weight to it but it is likely due to the beefy 5,000mAh battery housed inside.

On the back, the A21s has a familiar L-shaped housing for the quad-camera setup which is very reminiscent of the Galaxy M31 and Galaxy A51 (review). There is no in-display fingerprint for authentication purposes, instead, you get a capacitive physical fingerprint sensor on the back that can be slightly hard to reach. At the bottom, there is a 3.5mm headphone jack, USB Type-C port, and a speaker grille. The volume buttons, which are also slightly hard to reach, along with the power button are present on the right of the device. The left side of the device is empty save for the dual-SIM + microSD slot. 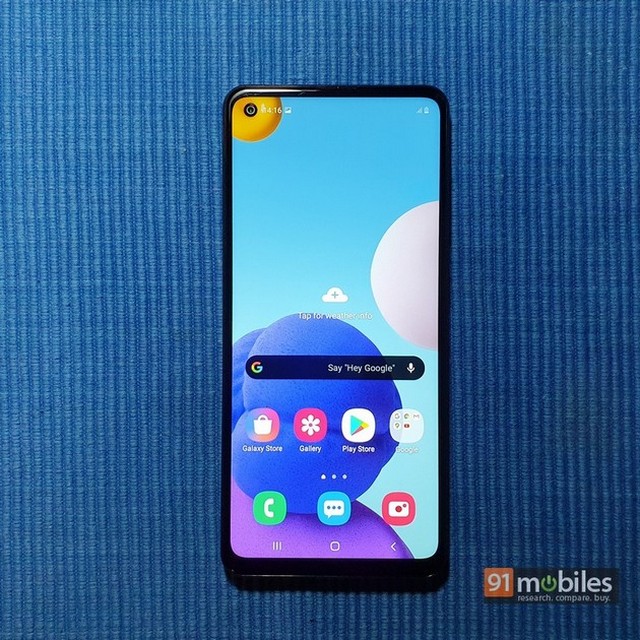 In terms of display, the Galaxy A21s sports a 6.5-inch LCD screen with an Infinity O panel, which is Samsung’s terminology for a punch-hole display. The screen itself offers HD+ resolution (720 x 1,600) and has a standard 60Hz refresh rate. Like other Samsung displays, the Galaxy A21s also gets sufficiently bright and is one of the most colour accurate in the segment. However, due to its LCD nature, the viewing angles on the phone are not the best and neither are the contrast levels. Even so, the big screen makes it a quality video consuming device although you will not be able to view full HD videos. There are no settings available to customise the colour temperature or vividness of the display, a feature that is present on the several competing Realme and Xiaomi phones. Realme 6 Pro and the POCO X2 also offer higher refresh rate displays while the A21s is sticking to 60Hz.

The quad-camera setup on the Galaxy A21s consists of a 48MP primary sensor, an 8MP ultra-wide sensor, and two 2MP sensors with macro and depth capabilities. It is prudent to point out that many of the A21s’ competitors, including the Galaxy M31, harbour 64MP quad-camera setups. On the front of the device, housed in the punch-hole, is a 13MP sensor. 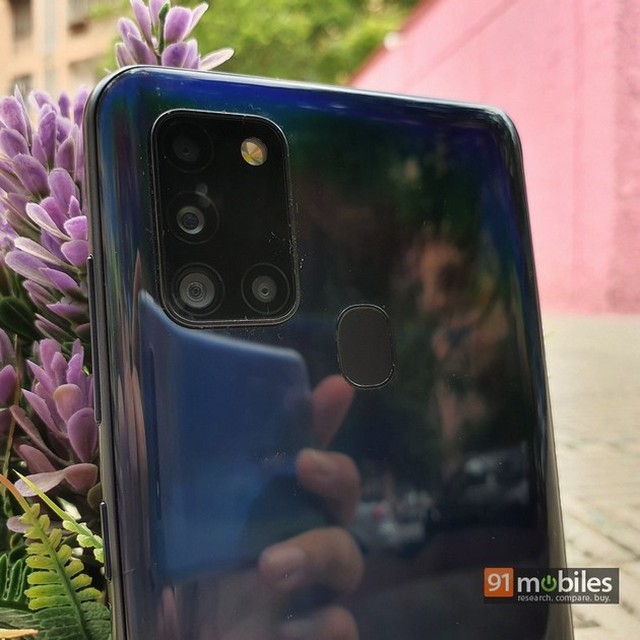 When plenty of light is thrown at the primary sensor it will churn out quite detailed photos with a touch of Samsung-branded over saturation. The HDR capabilities and exposure handling of the device are also good, although the sensor will struggle on colour temperatures in overcast weather conditions. Like other 48MP sensors, the phone takes pixel-binned 12MP shots although you can click a UHD 48MP shot which will add more details and lighting to your shot. 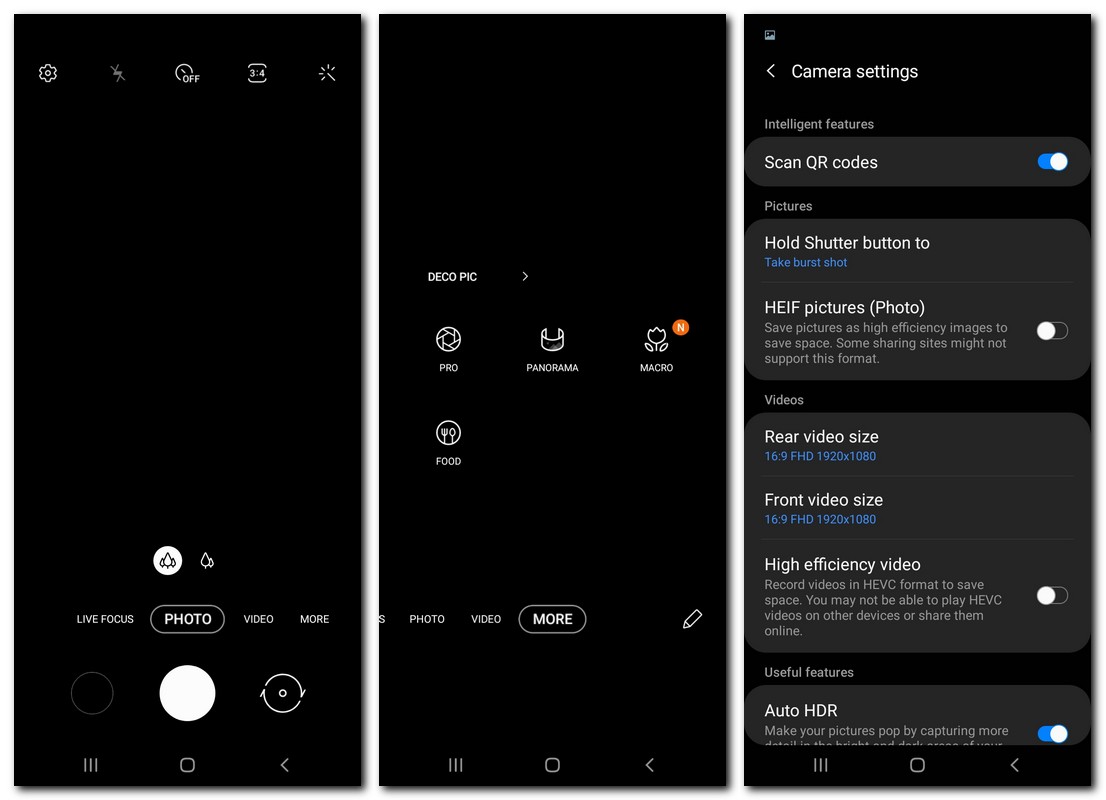 The ultra-wide lens has a 120-degree field of view, which does capture a lot more into the frame but the picture quality is not the greatest. The macro sensor and depth sensor are low on the megapixel count, which adversely affects photo quality but more so on the former. The depth camera is mainly for good bokeh shots which separate the background from the subject. On that account, the sensor works well but there are still areas around the subject which are not blurred out. The macro sensor has a fixed focus so if you place the camera too far out or too near, you will get out of focus shots. The focused shots themselves also don’t fare too good. 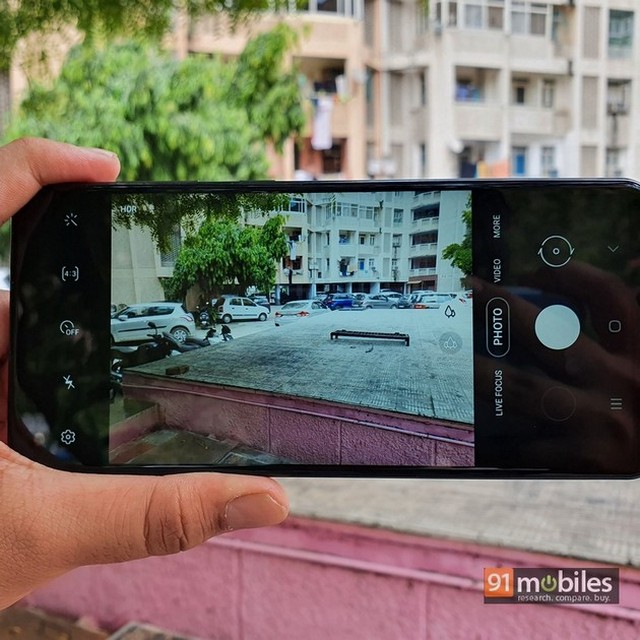 At night the quality of photos drops considerably, primarily because the Galaxy A51s doesn’t offer a dedicated night mode. Photos tend to lack a lot of detail while the other three lenses stop producing anything worthwhile altogether. The addition of an AI-enabled Night mode could solve a lot of problems and is possible to be introduced in a future software update. Apart from that the device also happens to have a 13MP selfie shooter which does churn out decent photos with a blend of face smoothening. The portrait mode on the front of the device works quite well in terms of background separation from the subject. The A21s packs an in-house Exynos 850 SoC which is the first time I’m seeing the chipset on a phone. It uses an 8nm manufacturing process and is an octa-core SoC which has the Mali G52 GPU integrated with it. The Exynos 850, as per Samsung, is more of a power efficiency solution rather than a workhorse. This means that heavy graphical usage or prolonged multi-tasking isn’t the device’s strongest suit. Benchmarks prove the point in a quantitative manner. On Geekbench, the managed a single-core score of 183 while on multi-core the score was 1,103. On AnTuTu the device managed a score of 121,139 and on GFXBench the Manahattan test showed the device having a score of 28fps. In terms of competing devices having the Snapdragon 730G, these scores are very much on the lower side. The Galaxy M31, a device present on the more budget-oriented M-series, has scores of 338 and 1,284 on single-core and multi-core scores respectively on Geekbench. 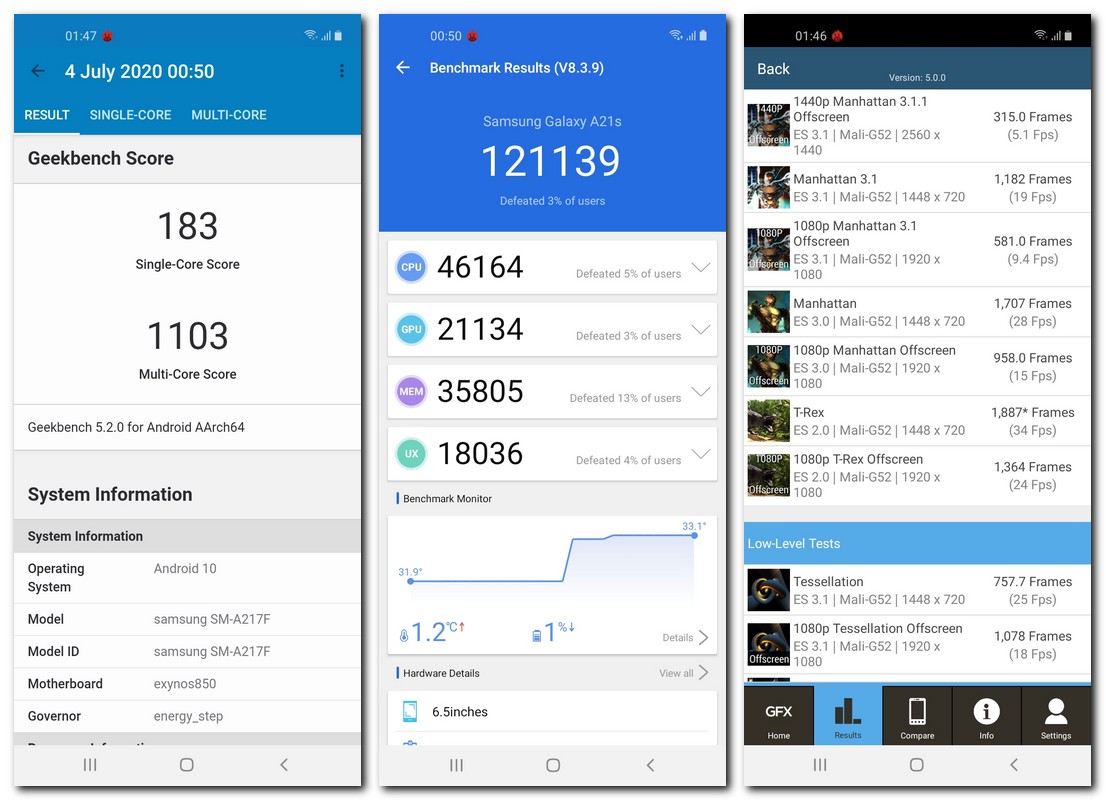 Even so, while the phone is not meant for power users, day-to-day tasks such as browsing through Facebook, Instagram while simultaneously switching to other heavy apps such as YouTube or WhatsApp should not be any problem. Enthusiasts of PUBG Mobile or any other heavy 3D game should look for other options. 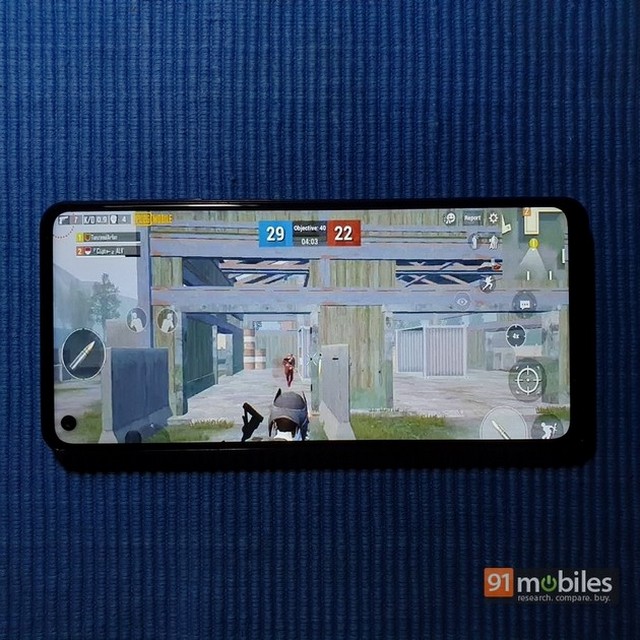 Authentication-wise, the device offers a capacitive fingerprint sensor which works well although if your finger is even slightly wet you could have trouble unlocking the device. The phone does have a face unlock method as well, but I have found it to be slightly unreliable even in ample lighting. 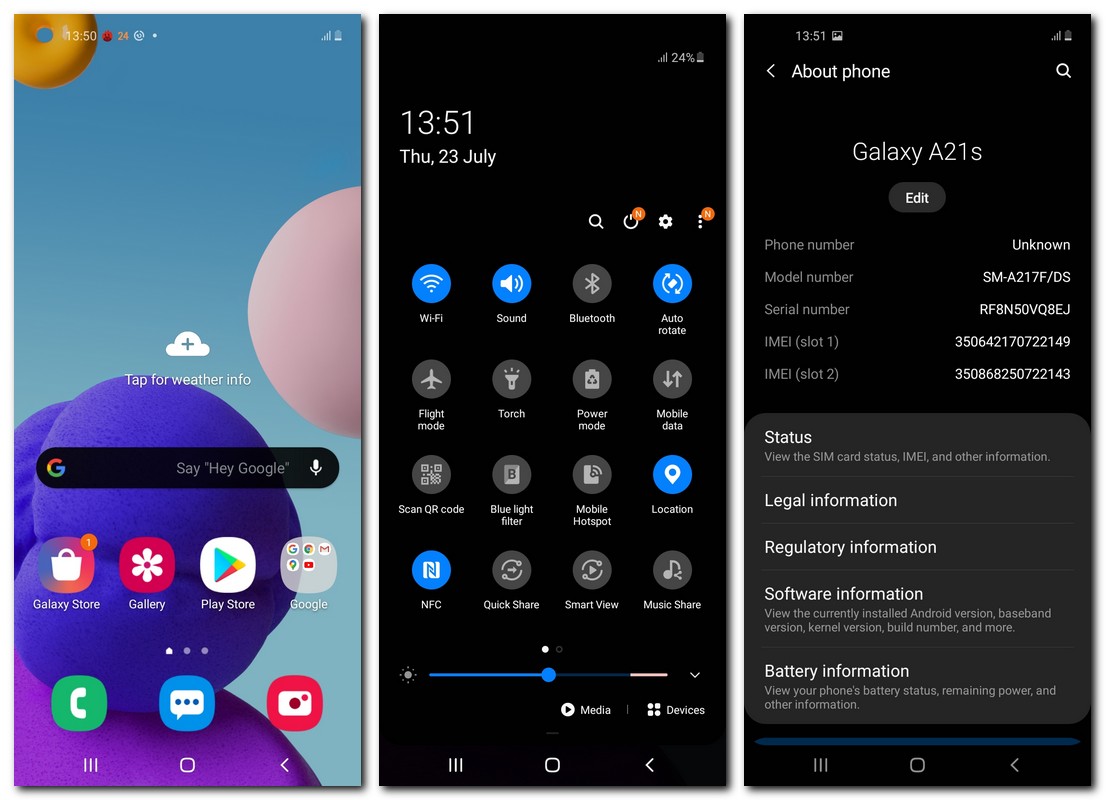 On the software side of things, the A21s runs the proprietary Samsung skin called OneUI 2.0 which is based on Android 10. Over a period of time, since the introduction of the OneUI platform, the company has been making several changes to make the experience much more refined and tilt towards a clean stock Android-like feel. The UI still endures the brunt of bloatware from Samsung but overall it is one of the nicer skins that you can get on Android phone. For a more detailed understanding of the OneUI platform, you can read our Galaxy M31 review here. 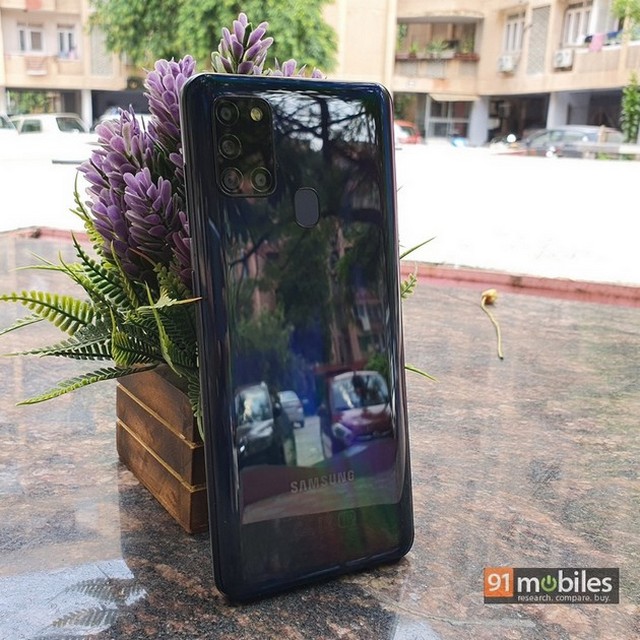 A big saving grace for the Galaxy A21s is definitely the beefy battery that is packed inside the device. It is a 5,000mAh cell that has support for 15W fast charger that comes right out of the box. On a day of moderate usage, the phone will very easily manage to last more than a day. My usage typically consists of browsing a lot of social media websites and watching a ton of YouTube. I was able to get a screen-on time of about 5-6 hours which is quite good for any smartphone. Our typical test which involves looping a single video at half brightness and half volume showed that the device lasted 26 hours which is to be expected for a smartphone having a 5,000mAh cell. The device does take a lot of time to charge up even with the fast charger. It took me nearly 2 hours to juice the phone up completely while charging to half the battery took typically 45 minutes.

The Galaxy A21s faces some tough rivals. The likes of the Realme 6 Pro (review), Redmi Note 9 Pro Max and even the POCO X2 (review) have at least one distinguishing feature which sets them apart. The A21s however, is edged out by its own rival, the Galaxy M31, a phone that packs in a whopping 6,000mAh battery and also higher-resolution 64MP sensor, at a lower price. It also performs much better on benchmarks.

The Galaxy A21s might be a decent smartphone by itself, but even for Samsung loyalists, I think the Galaxy M31 could prove to be a better option. 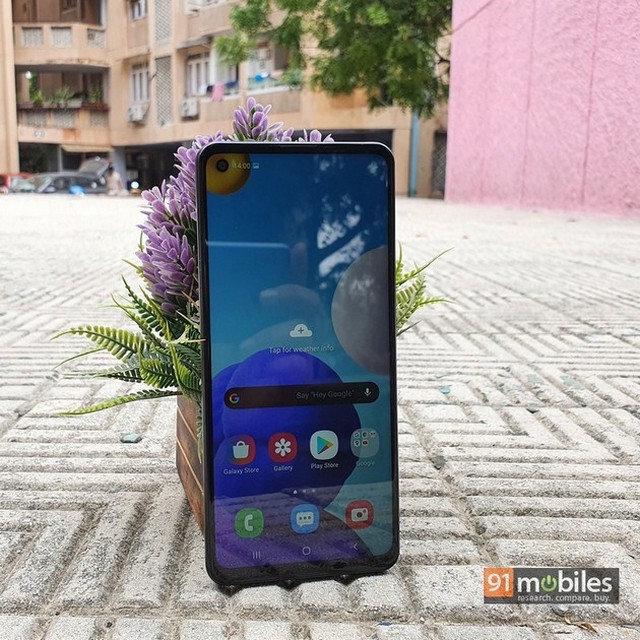