The Galaxy M series that Samsung launched last year saw some extremely competitive smartphones like the Galaxy M20 (Review), Galaxy M30 (Review) and Galaxy M30s (Review), phones that allowed the company to stand toe-to-toe with brands like Xiaomi and Realme. Samsung Galaxy M-series smartphones are now known for offering competitive hardware and attractive displays at affordable prices, and the new Galaxy M31 (first impressions) tries to stick to that tradition.

Samsung Galaxy M31 is a natural successor to the Galaxy M30 and Galaxy M30s. It’s a smartphone that doesn’t change too much, keeps the features that worked well the last time while offering necessary upgrades in some areas. Primarily, Samsung has kept its focus on the cameras as the Galaxy M31 touts a 64MP quad camera setup. Other key Samsung Galaxy M31 specifications include a Super AMOLED display, 6,000mAh battery and Android 10 software at a starting price of Rs 14,999 in India. 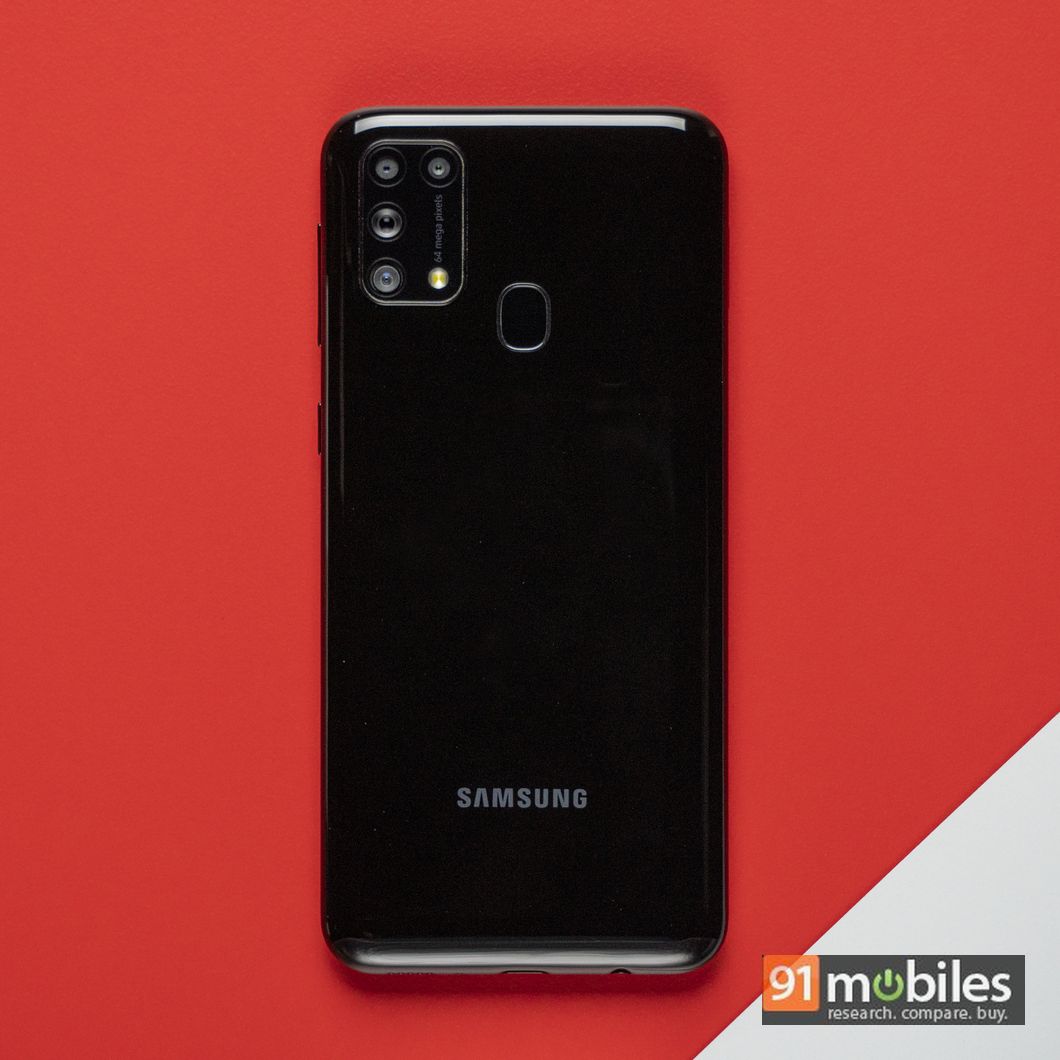 By not changing things too much, the Galaxy M31 looks and feels similar to the Galaxy M30s, which is both good and bad. The good thing is that the smartphone offers all the right features to make it a solid sub-Rs 15,000 smartphone. The bad is that the Galaxy M31’s design and certain specifications may not hold up well against some other better-looking and more powerful smartphones that are set to launch soon in this segment.

As mentioned earlier, the Samsung Galaxy M31 comes with a familiar design. It looks very similar to the Galaxy M30s in that it features a plastic unibody panel on the back with a rear-mounted fingerprint sensor and a square-shaped camera module on the top left corner. While the plastic material helps in keeping the smartphone light (despite housing a massive battery), it does make it feel less attractive compared to all-glass phones like the Redmi Note 8 Pro (Review). 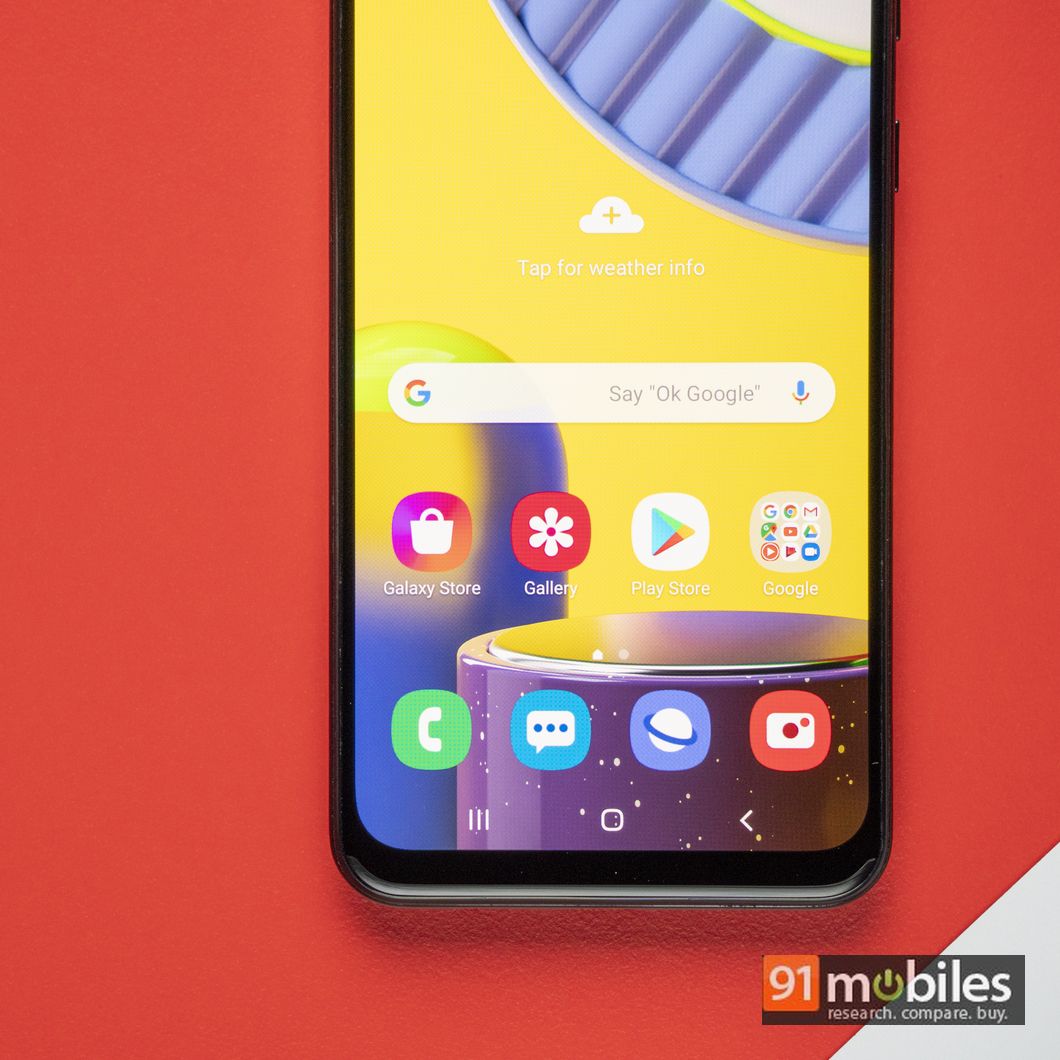 The Samsung Galaxy M31 is a thick phone and it feels slightly heavy in the hand, so it does get tiring holding it after some time. The smartphone is available in blue, black and red colour options. Thanks to a glossy rear panel, the Galaxy M31 is a fingerprint and smudge magnet, something which is quite noticeable on the black colour variant that we received for review. Moreover, the rear panel attracts scratches if you place it on a table or in your pocket along with some keys. 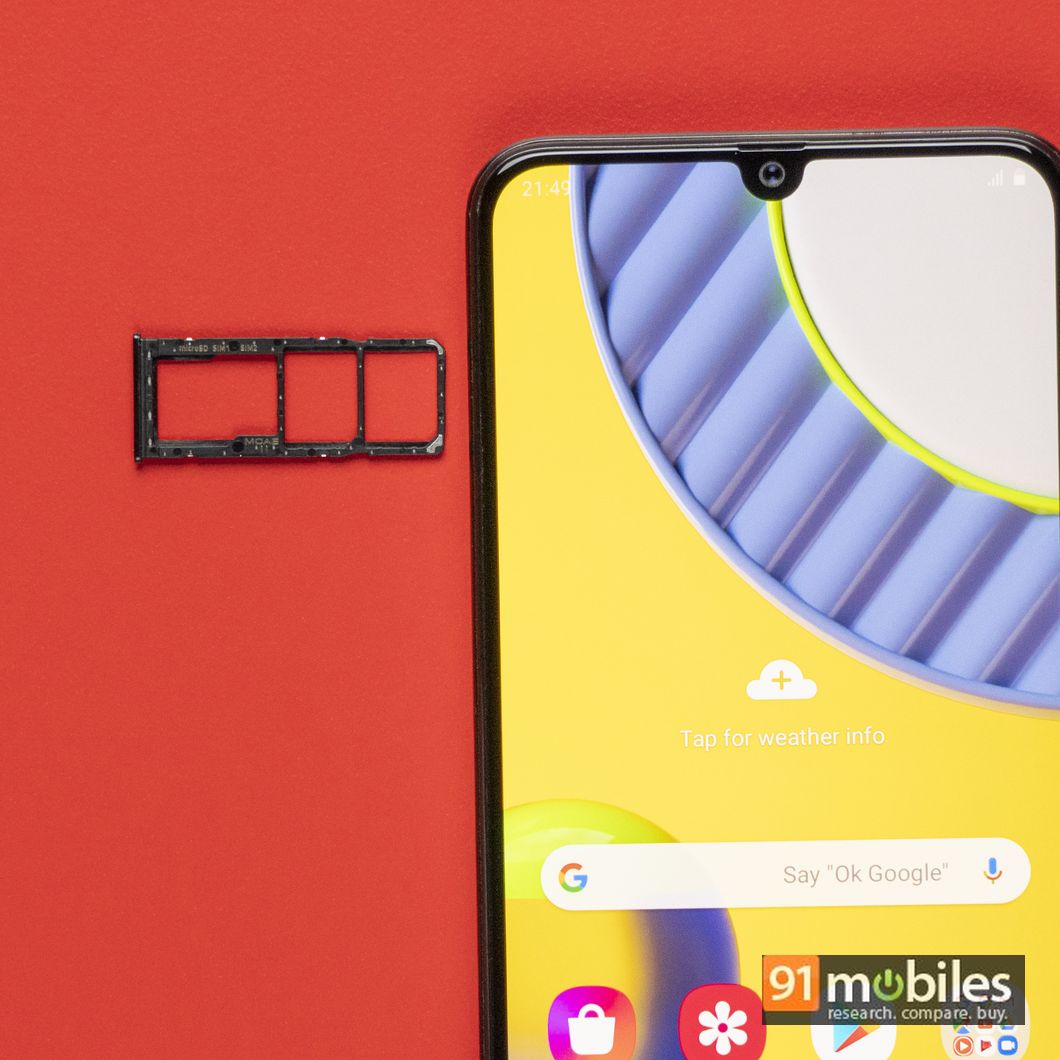 Samsung makes attractive displays, so it’s understandable that the company did not feel the need to make any changes here. The 6.4-inch Super AMOLED display looks stunning with vibrant, saturated colours and excellent viewing angles. The display offers good brightness levels also, so you won’t have any issues reading the screen under bright sunlight. The FHD+ screen is sharp and delivers crisp video content in 1080p resolution. With Widevine L1 support, the Galaxy M31 can stream content on Netflix and Amazon Prime video in full HD resolution. 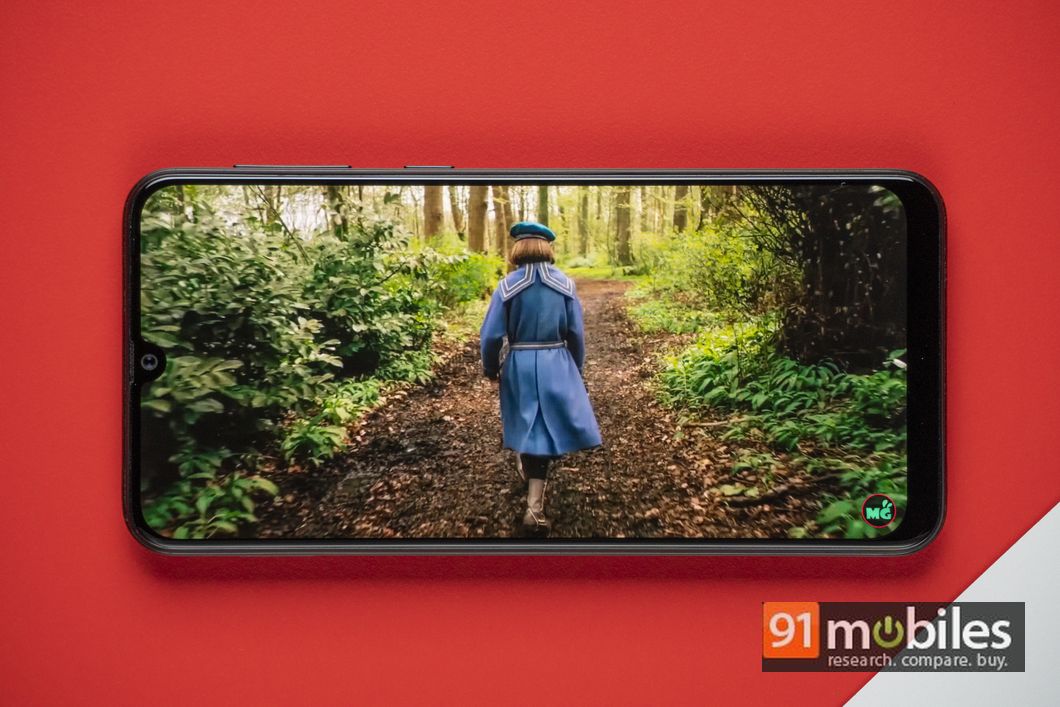 The biggest upgrade to the Galaxy M31 is the cameras. The smartphone features a 64MP quad camera setup at the back as opposed to the 48MP triple camera system on the Galaxy M30s. The new setup includes a high-resolution 64MP f/1.8 Samsung GW1 primary sensor, an 8MP ultra wide-angle lens, a 5MP depth camera and a 5MP macro lens. The upgraded setup is more versatile, allowing users more ways to photograph.

The Galaxy M31’s main camera does take decent daylight photos. With scene optimiser enabled, the camera uses a lot of software processing to boost colours, which you might prefer over more natural tones. So, if you’re capturing flowers, for example, greens will look greener and pinks can turn red. Photos are warmer, which means you won’t be able to capture natural white tones. In general, I found the photos captured during daylight to lack contrast and dynamic range compared to the Redmi Note 8 Pro in this segment. 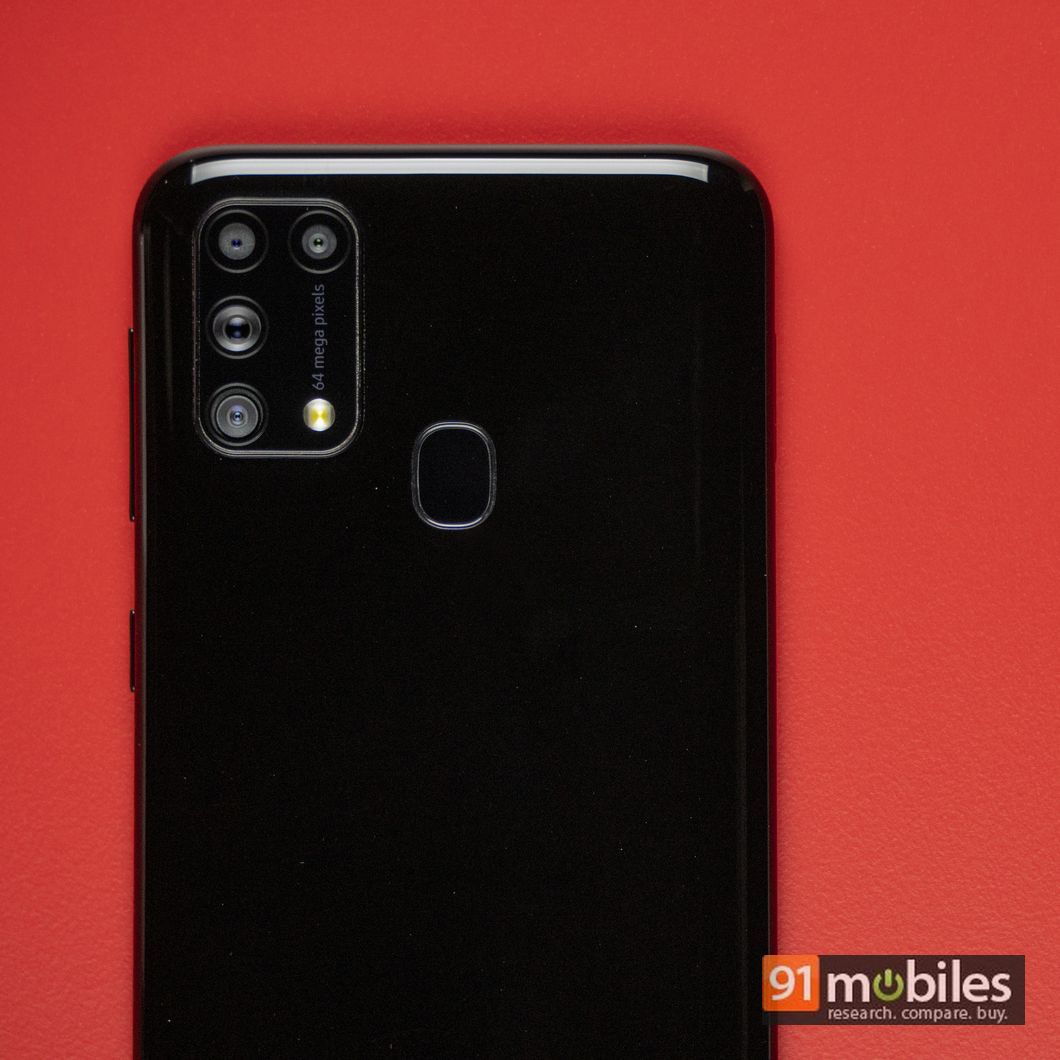 The main camera is able to quickly focus on a subject in daylight, but this gets a little iffy as the sun goes down. By default, the main camera shoots in 16MP and uses pixel binning to offer brighter and sharper photos. You can manually switch the ratio to 3:4 64MP to capture high-resolution photos. However, 64MP photos will look darker, lack HDR support and should only be used in broad daylight if you want to capture a wide landscape to zoom in on later.

Moving on from the main camera, the Samsung Galaxy M31’s 8MP wide-angle manages to capture pleasing wide-angle shots in daylight. Colours look good and there enough detail as long as you don’t zoom in and pixel-peep. Portrait mode using the Live Focus mode can capture some please bokeh shots as long as the blur effect is not extreme. Skin tones look warm and soft, but there’s good detailing to be found.

Lastly, we have the 5MP macro camera that can get as close as 3cm to the subject. Again, best used in daylight, the macro camera lets you capture some creative close-up shots. Macros can look clear and detailed as long as the subject is still. Colours, however, tend to look muted and washed out compared to natural bokehs that can be captured using the main camera.

The Galaxy M31 is pretty decent at recording videos. Both the front and rear cameras can record UHD videos. The main camera also supports Super Steady mode, which does a pretty good job at keeping the video jitter-free while recording handheld.

Samsung has also upgraded the front camera from 16MP to 32MP, which means selfies will come out sharper on the Galaxy M31. While this is true and the selfie camera does capture good details on clothes and hair, it still smoothens the face despite the beauty mode being disabled. The front camera also supports Live Focus, allowing you to adjust bokeh intensity in real time. The higher the bokeh effect, the more unnatural the subject separation looks.

Overall, the Samsung Galaxy M31 comes with a versatile camera setup that will allow you to capture photos in various perspectives. And while the 64MP quad camera system sounds like a good upgrade thanks to the added macro lens, it does not feel like the best quad camera setup compared to the competition in this segment.

Samsung Galaxy M31 is powered by a 2.3GHz Exynos 9611 octa-core chipset based on a 10nm process and equipped with Mali G72 MP3 GPU. This is the same processor that powered the Galaxy M30s as well. Samsung has bumped up the base variant from 4GB RAM to 6GB RAM, which should deliver a smoother multitasking experience. The smartphone comes in 64GB and 128GB storage variants, which can be further expanded by up to 512GB via a microSD card.

Right out of the box, the Samsung Galaxy M31 felt as fast as you would expect from a brand new smartphone. Scrolling through One UI 2.0 was smooth and apps were quick to open as well. Throughout our week-long usage, we did not encounter any slowdown or lags while using different day-to-day apps for messaging, social media browsing and so on. 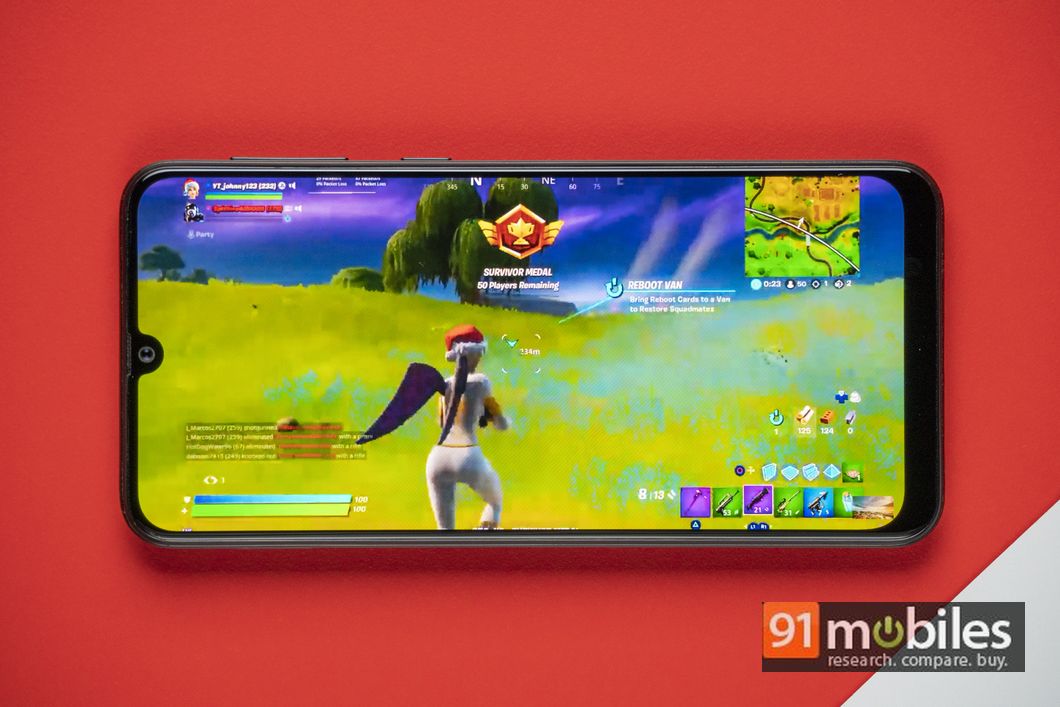 The Exynos 9611 is a decent mid-range processor that can handle day-to-day tasks with ease. It can also run graphic-intensive games like PUBG on high graphics and frame-rate settings by default. We played a 30-minute session of PUBG on default settings, which ran smoothly. In high to extreme graphics settings, we noticed the phone got hot to the touch during gameplay. This did not affect the battery life of the phone, however, as a 30-minute session only drained the battery by around 5 percent, which is impressive.

Talking about the Android 10-based One UI 2.0 software, it is a fairly simple and easy-to-use interface. In fact, the Galaxy M31 ships with One UI Core rather than One UI, which means some features such as Bixby and Bixby Home are missing. You also won’t be able to download Samsung Pay from the Play Store. The stripped-down One UI Core will still feel like One UI, so if you don’t miss Bixby and Samsung Pay too much, you should be happy with what the software offers.

Samsung Galaxy M31 houses a massive 6,000mAh battery, which is unchanged from the Galaxy M30s. It is good to see that Samsung has not downgraded the battery, because this truly sets the smartphone apart from most of its rivals in this segment. From day-to-day usage, to gaming and media consumption and standby time, the Galaxy M31’s battery life is simply terrific. The phone can easily last well over a day with intensive usage and can last a day and a half on lighter use that simply involves browsing through social media and messaging. 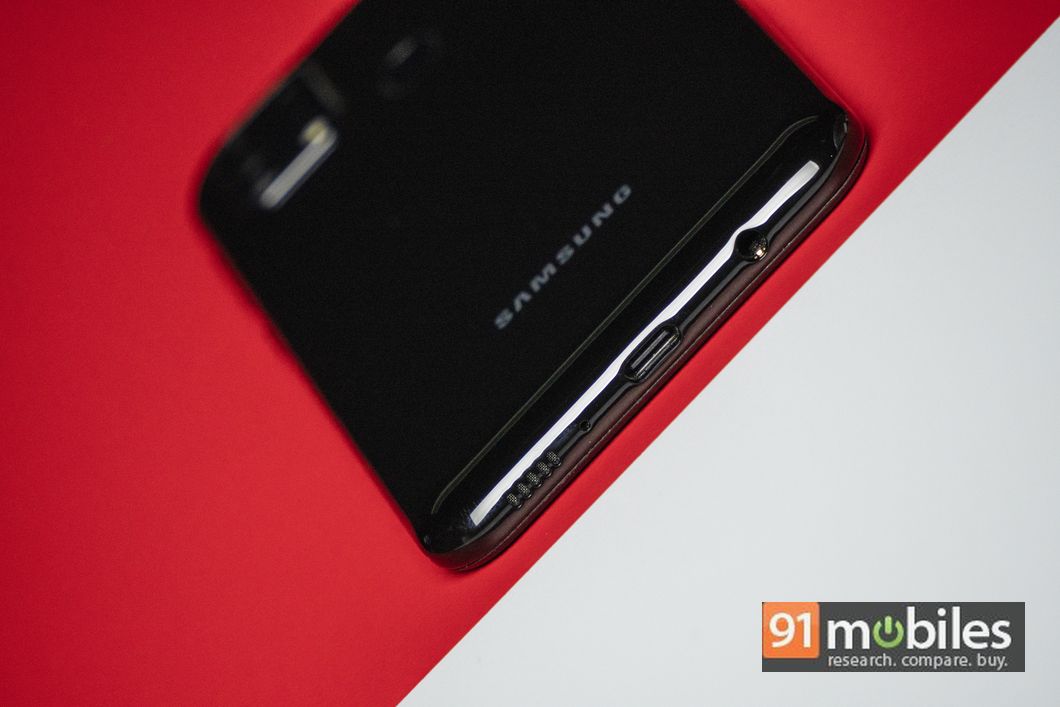 In our PCMark test, the Galaxy M31 lasted an impressive 14 hours and 40 minutes from 100 percent to 20 percent. The Galaxy M31 supports 15W fast charging, which is quite disappointing to see given the size of the battery. It took over three hours to charge the phone from zero to 100 percent.

Overall, the Samsung Galaxy M31 is almost identical to the Galaxy M30s. It retains the same Super AMOLED display, Exynos 9611 SoC and long-lasting 6,000mAh battery. The company has essentially upgraded the cameras to offer a higher resolution 64MP sensor and a quad camera setup. This seems like a logical upgrade, and one which consumers should be satisfied with under Rs 15,000.

As good as the Galaxy M30s is, we feel Samsung could have made offered something more. An upgraded processor or Infinity-O display with slimmer bezels and a higher screen refresh rate would have been welcome, especially considering what the competition is ready to offer in this segment in 2020. The Galaxy M31 is a solid sub-Rs 15,000 phone, but we feel the smartphone will look dated pretty soon as we will be seeing phones like the Realme 6 Pro, Redmi Note 9 Pro and others launching in India in the coming weeks.