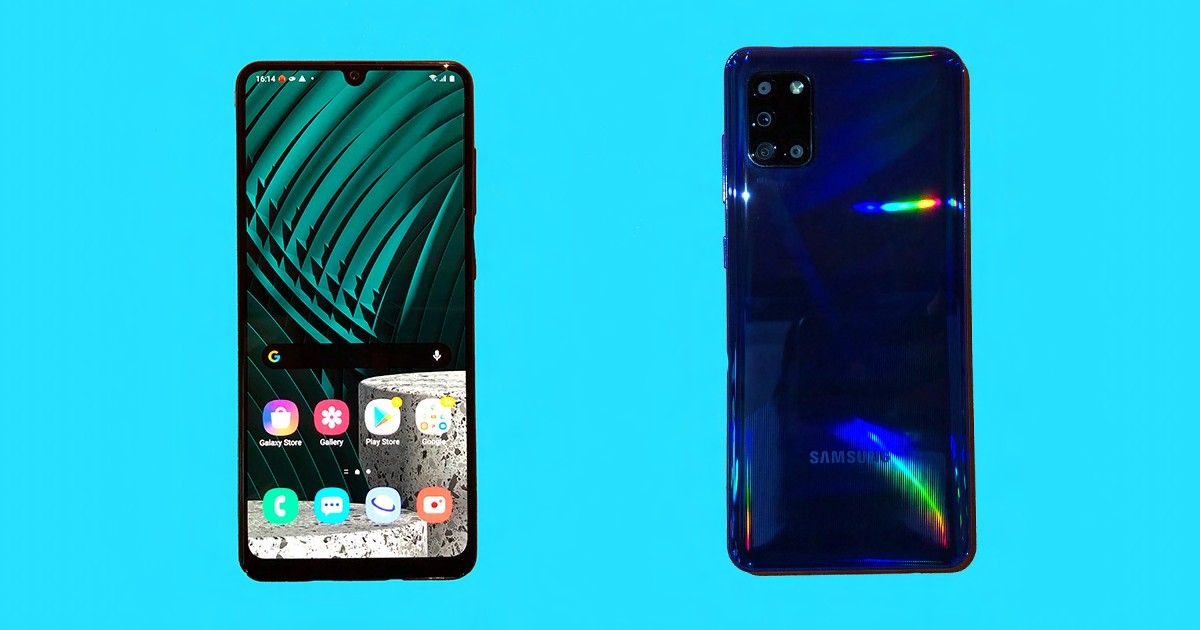 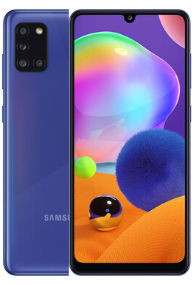 Samsung’s Galaxy A-series lineup has been quite popular. The Galaxy A50 (review) from last year happened to be the most shipped Android smartphone globally, as per Counterpoint, and it seems only natural to capitalise on the success of this brand. As such, Samsung has several phones under the Galaxy A umbrella with varying price points. The latest in the Indian market is the Galaxy A31 which has been priced at Rs 21,999 for the single 6GB RAM and 128GB storage variant. The device takes over from last year’s Galaxy A30 (review) and is slotted right between the Galaxy A50s (review) and Galaxy A51 (review) in terms of pricing. For a mid-range offering, Samsung has tried to leave very few stones unturned, in an attempt to provide an experience that is better than its rivals. Has the company succeeded in this? That is a question I will try and answer in this detailed review of the Galaxy A31. Read on to find more. 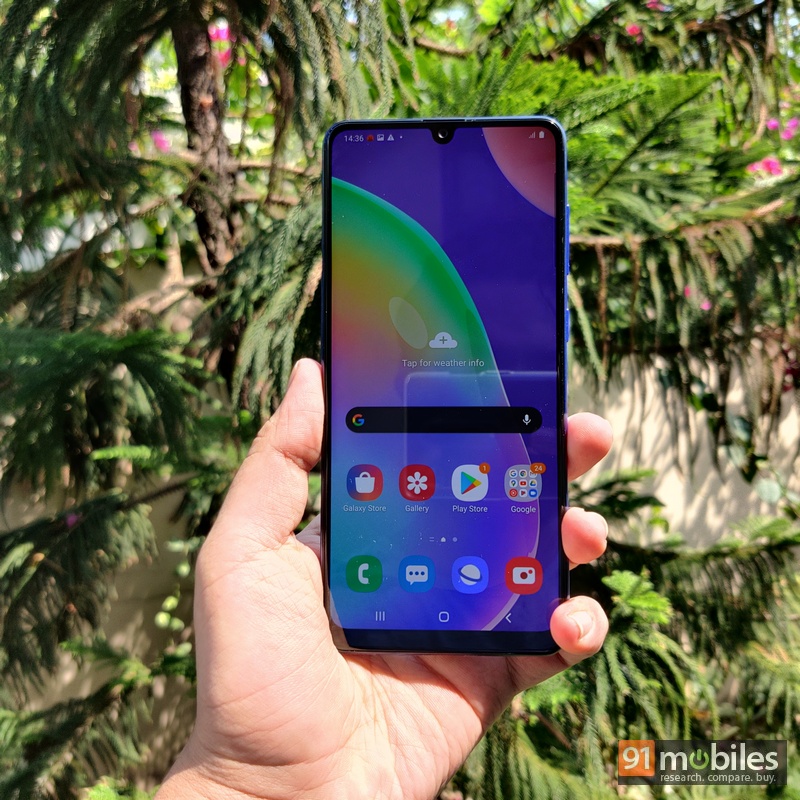 There can be no denying the fact that Samsung phones exude a premium appeal no matter the price. It is also the reputation, which the South Korean electronics giant has garnered over a vast period of time, which helps the company sell so many phones. However, the Galaxy A31, while a worthy phone for its price, falls short of delivering the kind of performance users have gotten accustomed to with the likes of Xiaomi and Realme.

Like with previous A-series phones, the Galaxy A31 has retained most of the design elements of its previous iteration, which is the Galaxy A30. The A31 does feel lightweight in my hand which is surprising, given the big battery it houses. The bezels on the device also remain the same with the abnormally large chin and the Infinity U-display which happens to be Samsung’s terminology for a waterdrop notch. Quite a few phones, costing less than the Galaxy A31, have been implementing a punch-hole style display for devices which I believe is a much more elegant option. This also includes the recently-unveiled Galaxy M31. 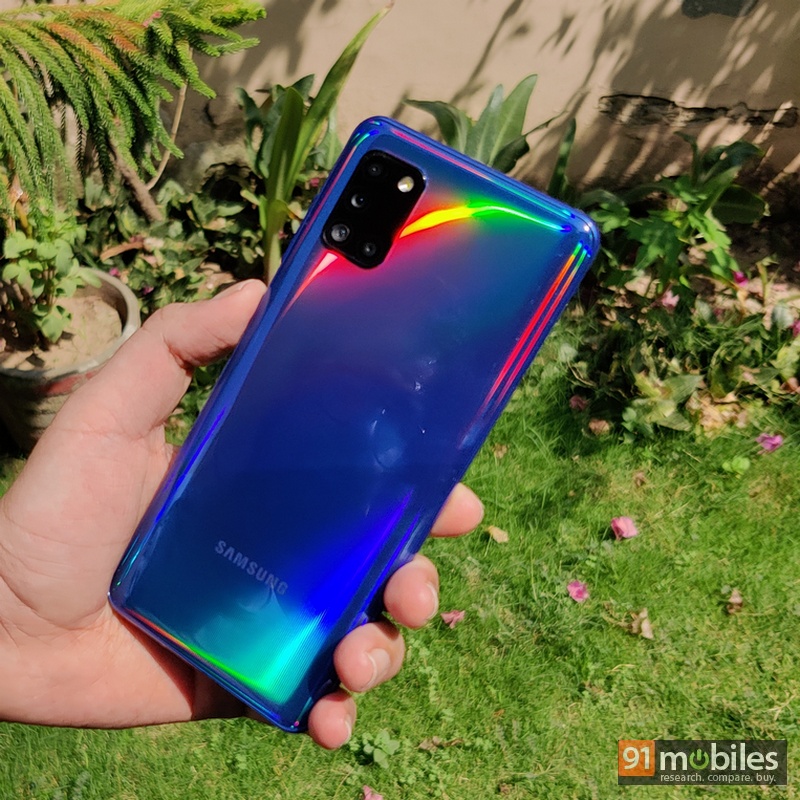 The back of the device has a quad-camera system that nearly sits flush with the phone’s back. The camera housing has the lenses arranged in an L-shape, reminiscent.. nay exactly like the Galaxy A51. It is highly unlikely that people will be able to distinguish the two phones when looked at from the rear. The A31 also happens to have the same prism-like reflecting gradient on the back which displays a full rainbow of colours when light falls on it from different angles. Samsung has aptly named the variant we have received for review as Prism Crush Blue, since the overlaying colour on the back is a bluish tinge with the frame having a purple colour. In short, the device is quite pleasing to look at. 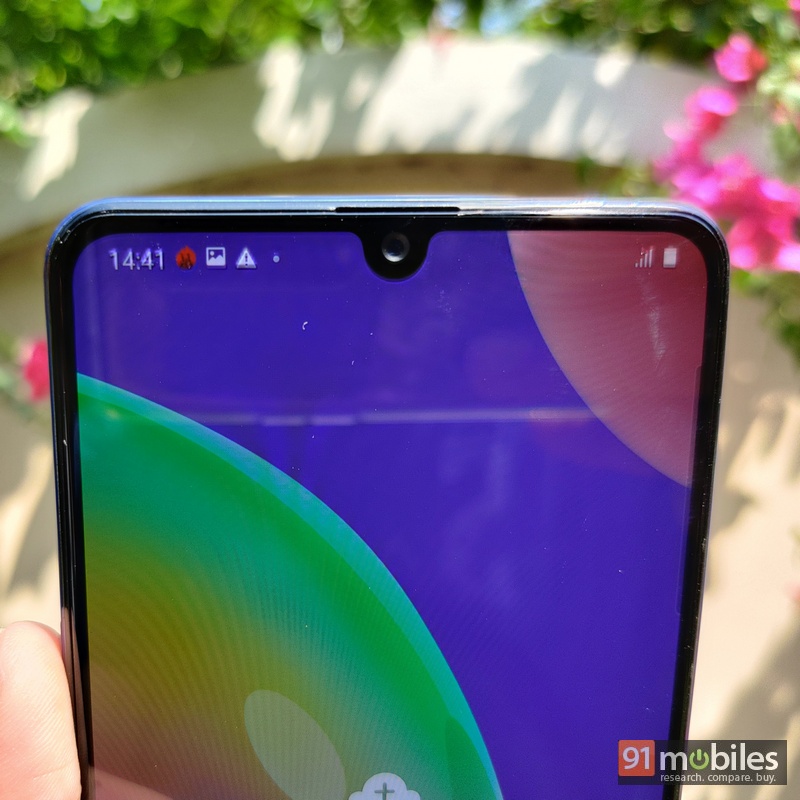 In terms of ports and buttons, the Galaxy A31 features a headphone jack, Type-C port and a speaker grille at the bottom. On the right side of the device are the volume rocker and power buttons while the left side happens to have just the dual-SIM slot. 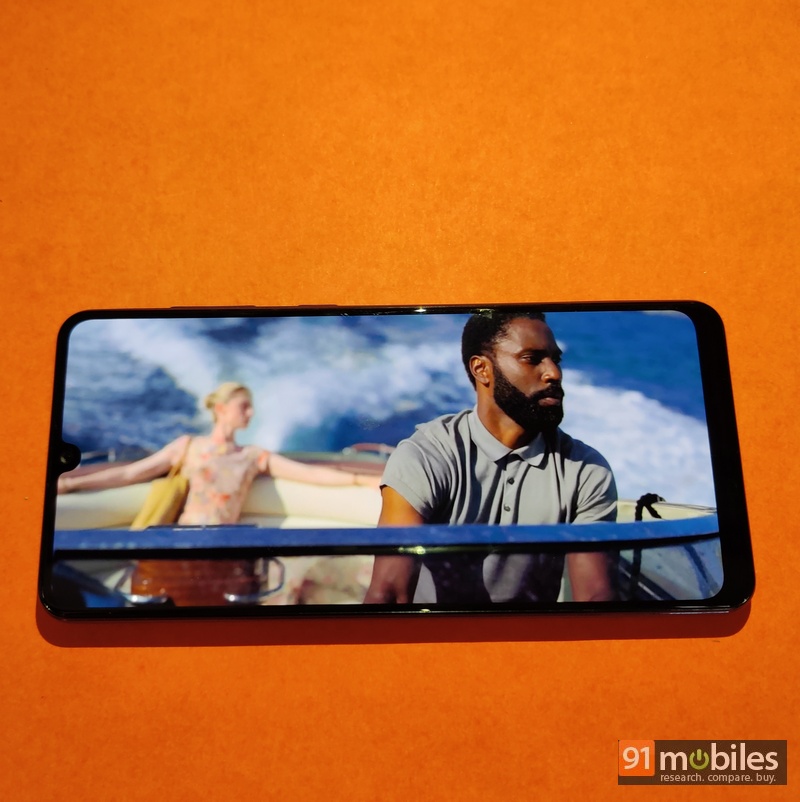 The Galaxy A31 features a Super AMOLED display like its predecessor, and it also measures the same at 6.4-inch with an FHD+  2,400 x 1,800 resolution. Samsung has maintained an impressive standard in smartphone displays which happen to be extremely rich in colour and brightness. You will be getting more of the same with the Galaxy A31’s vibrant display, with excellent contrast ratios and viewing angles owing to its AMOLED nature. Blacks are naturally more pronounced and colours are quite punchy. There is, however, no option to change the colour temperature as we have seen on the Galaxy A51. Standard options such as a Blue light filter, a system-wide dark mode, always-on display and more are present in the display settings menu. The Galaxy A31 screen gets sufficiently bright for reading in sunny conditions. I guess asking for a higher refresh rate display on top would be too big an ask since this feature appears to be reserved only for the company’s premium-tier Galaxy S20 series.

As mentioned earlier, the Galaxy A31 rocks a quad-camera setup on the back which is a big upgrade from the dual cameras on the Galaxy A30. The primary camera is a 48MP main snapper which is supported by an ultra-wide lens with an 8MP sensor, a 5MP macro sensor and a 5MP depth sensor. If this arrangement looks familiar to you then you would be right since it is almost exactly the same as the Galaxy A51. The only difference is a slightly higher megapixel count on the Galaxy A51’s ultra-wide-angle lens.  The front of the Galaxy A31 has a 20MP selfie shooter with an f/2.2 aperture. 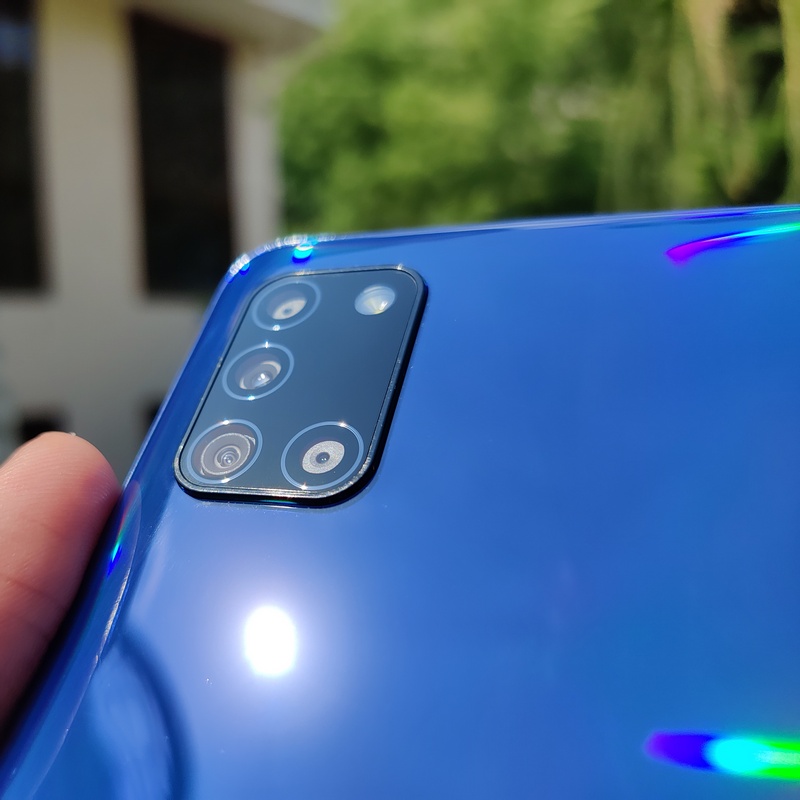 For shooting photos in daylight, the Galaxy A31’s primary sensor is an excellent companion with only small drawbacks. There is a general saturation of colours which make them look punchier than they are in real life. Some examples of this are making the sky a darker shade of blue or making maroonish walls in my house a darker shade of red. Dynamic range can be a tricky spot too for the camera but in general, it will get the job done amicably. The ultra-wide angle lens is good only for daylight usage but doesn’t expect the sharpness or details that the primary sensor offers. The macro camera does not fare any better with its operational range between 3-5 cm and the low-resolution sensor churning out photos that are barely usable. Oh, and of course there needs to be a ton of light for the macro sensor to function at all. The depth sensor works as advertised with the portrait mode, dubbed as Live Focus by Samsung, producing respectable bokeh shots with good background separation and the ability to adjust the blurring. However, any camera can produce a decent enough image when plenty of light is thrown at it. Things get tricky at night and this is where some of Samsung’s affordable phones struggle to perform. For instance, the Galaxy A31 lacks a dedicated Night Mode although it is something that can be brought in a future update. You are left with an automatic scene optimiser when the sensor detects low-light but that just does not cut it. Most of the time pictures are grainy and have a lot of noise. There is also excessive smoothening of details and exposure is not calibrated in most shots. Samsung can possibly resolve this with a software update, but as of now, night photography is sub-par on the device. 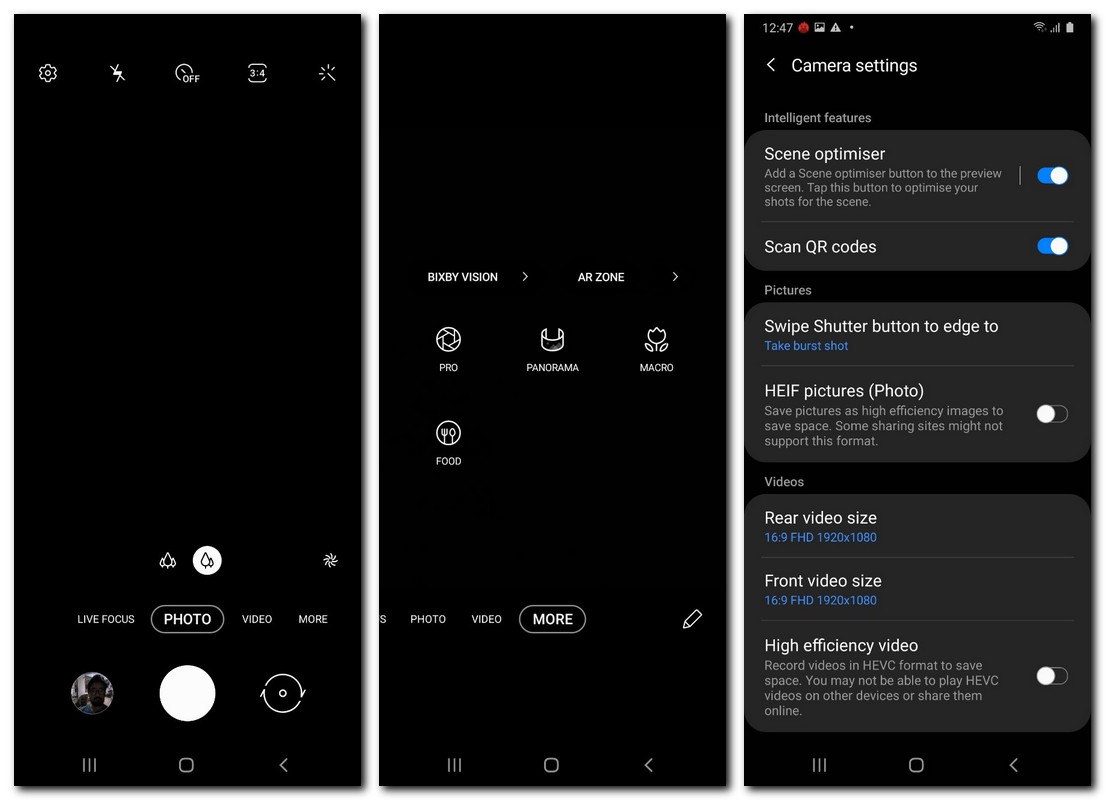 Lest we forget, there is also a selfie shooter on the device which does click nice pictures with the usual Samsung brand of smoothing out of facial features. The front portrait mode could be a hit or miss in low-light but works fine most of the time in daylight.

Inside the phone is a MediaTek P65 SoC, the use of which has surprised me for two reasons. The first is that I had expected Samsung to use its in-house Exynos SoC to power the A31. The second was the usage of a relatively low-powered chipset when MediaTek’s G-series stable offers some enticing options such as the G90 or the G90T. The latter is present on the Realme 6 (review), a device which is nearly Rs 5,000 cheaper than the Galaxy A31 for the same 6GB RAM + 128GB storage configuration. The Realme 6 scored 489 and 1,660 on Geekbench 5 for the single and multi-CPU benchmarks respectively while the same scores for the Galaxy A31 were 358 and 1,216. On AnTuTu the gap is even wider with the Realme 6 scoring a whopping 290,483 while the Galaxy A31 has to contend with 168,607. 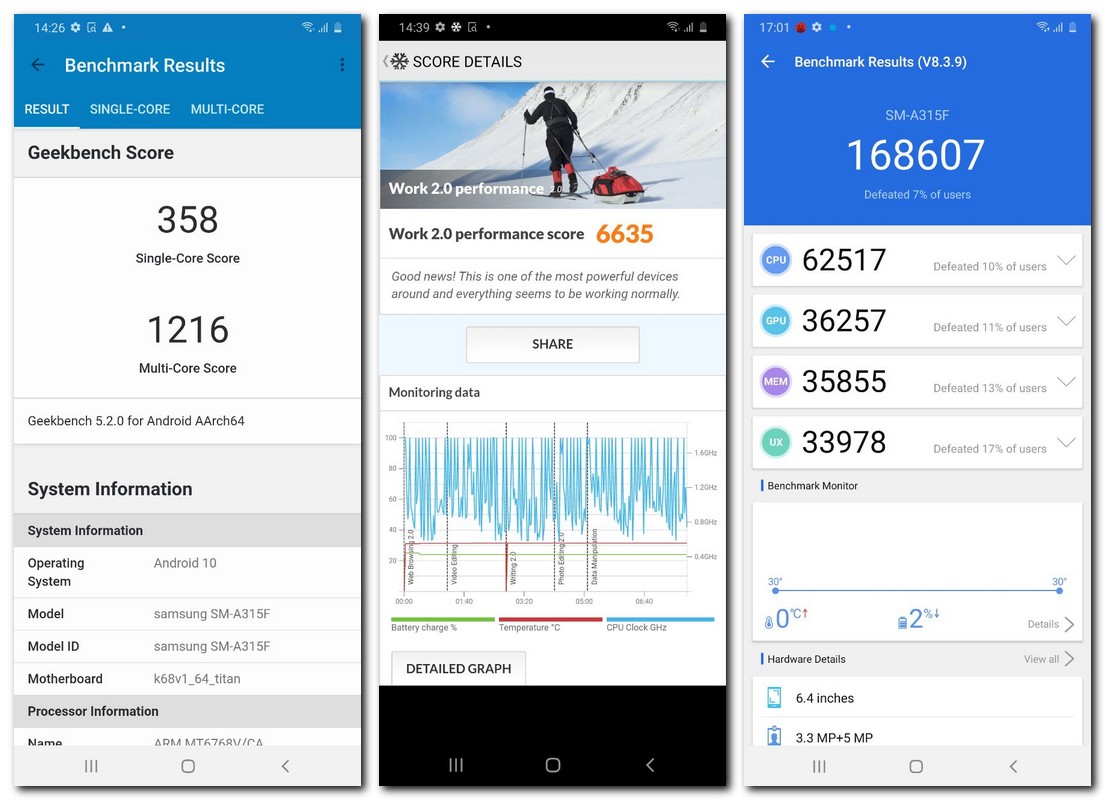 This does not mean that the Galaxy A31 is a slow phone by any standards. It handles regular tasks such as opening a ton of apps in the background with relative ease. There was also no lag while switching between apps and the ample amount of RAM meant that the apps also stayed open in the background. However, fans of PUBG Mobile have better and cheaper avenues to explore than the Galaxy A31. The phone does handle the Extreme frame rate option but only at Smooth graphic settings. On top of that, the phone starts lagging within 30 minutes of gaming. Phones like the POCO X2 (review) or the Redmi Note 9 Pro Max or Realme 6 Pro (review), with their gaming-focused SoCs are much better and cheaper options for PUBG enthusiasts. 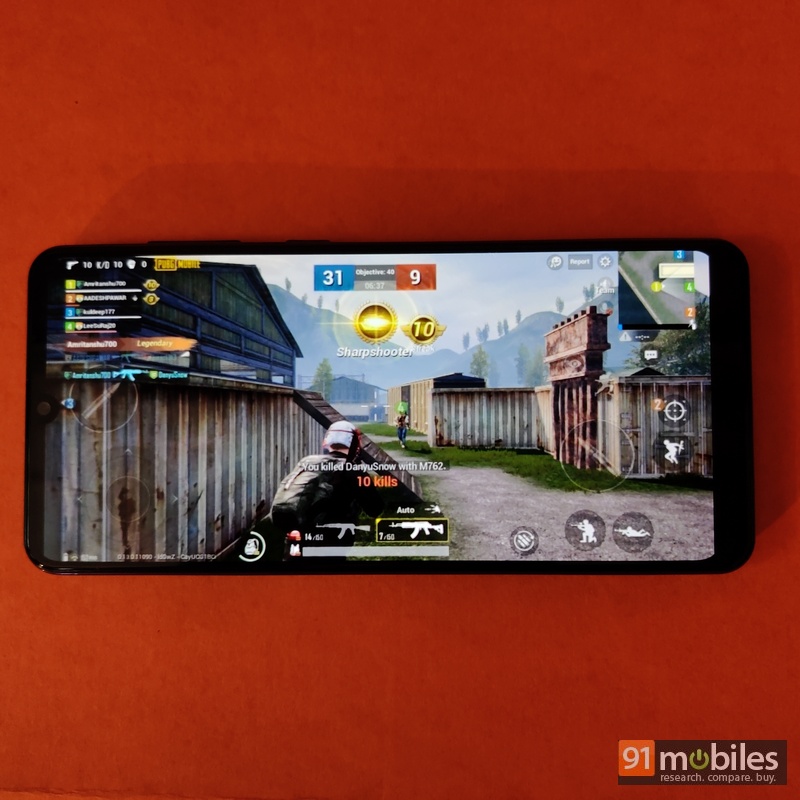 Authentication on the Galaxy A31 happens via an in-display fingerprint sensor and it works just about fine. Samsung appears to have not perfected the optical fingerprint sensors it uses in quite a few A-series devices. On the A31 the fingerprint reader works about half the time, while in other instances, one ends up trying different thumb combos on the sensor before giving up and typing in the PIN. There is also the ability to unlock using your face which is not as secure as your fingerprint but is definitely a much faster option. 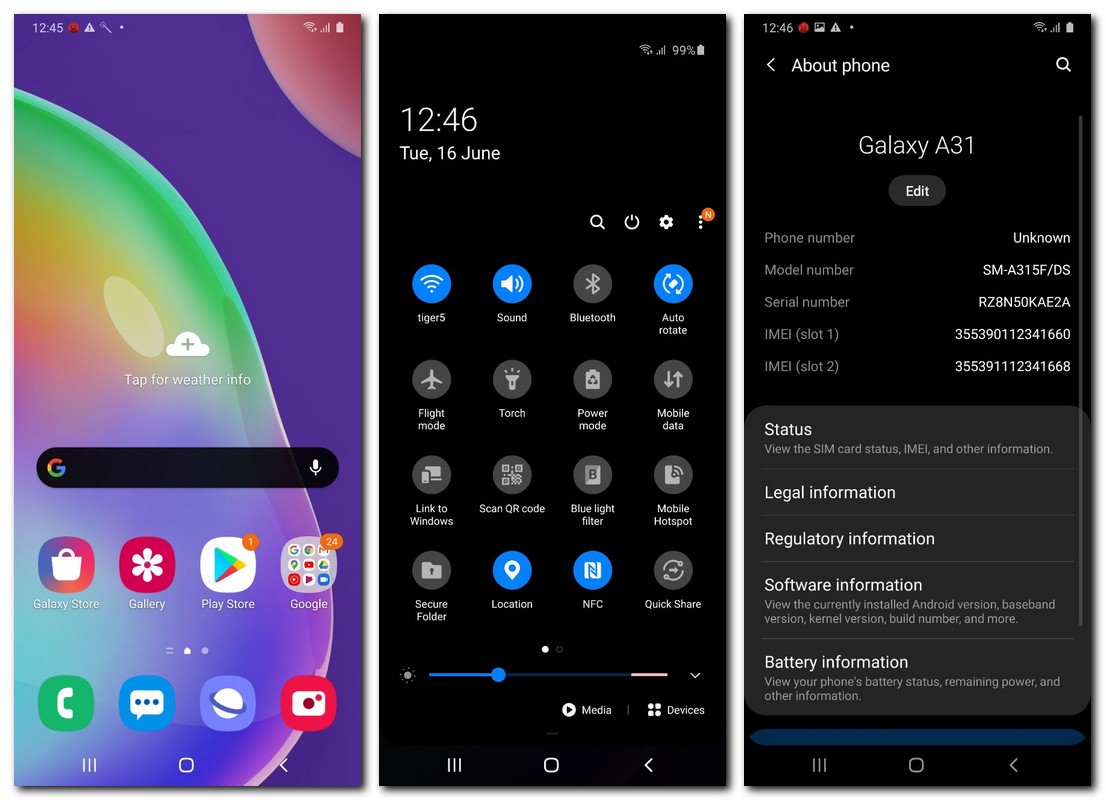 On the software side of things, the Galaxy A31 runs Samsung’s custom skin called OneUI 2.0. which is based on Android 10. I won’t talk about it much since it has been covered extensively in our Galaxy M31 review. In summary, good UI, smooth interface, lots of customisations but still excessive amounts of bloatware. 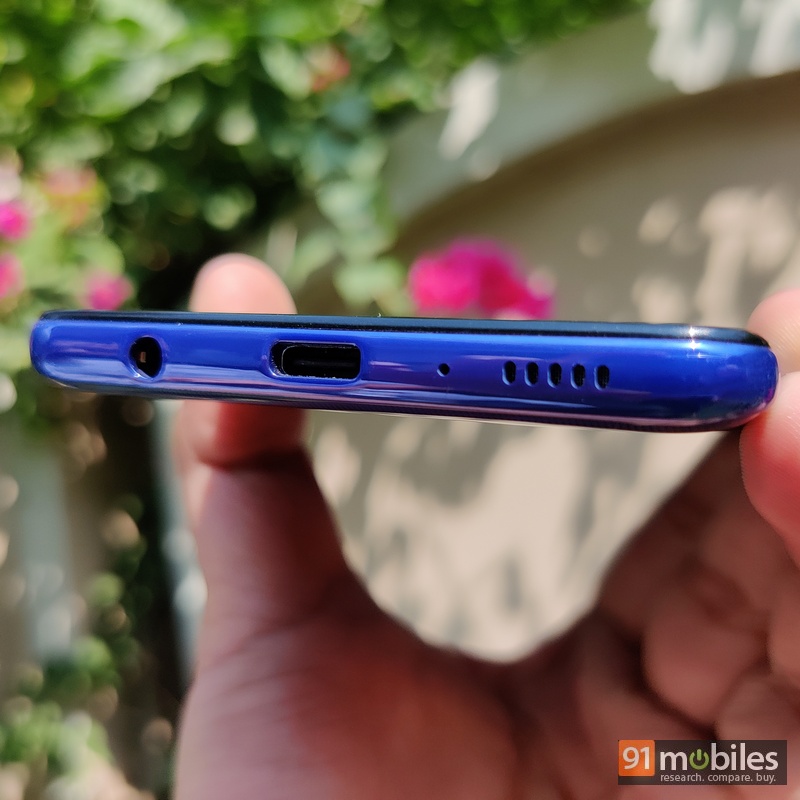 The Galaxy A31 packs in a massive 5,000mAh battery inside it which is enough to comfortably last the entire day and halfway through the next day as well. Packed in with the phone is also a 15W fast charger, that takes about 150 minutes to charge the A31 from 0 – 100. Our standard battery drain test, which involves playing a single video on loop at half brightness and half volume, the phone lasted about 23 hours which is standard for a phone of its battery capacity. 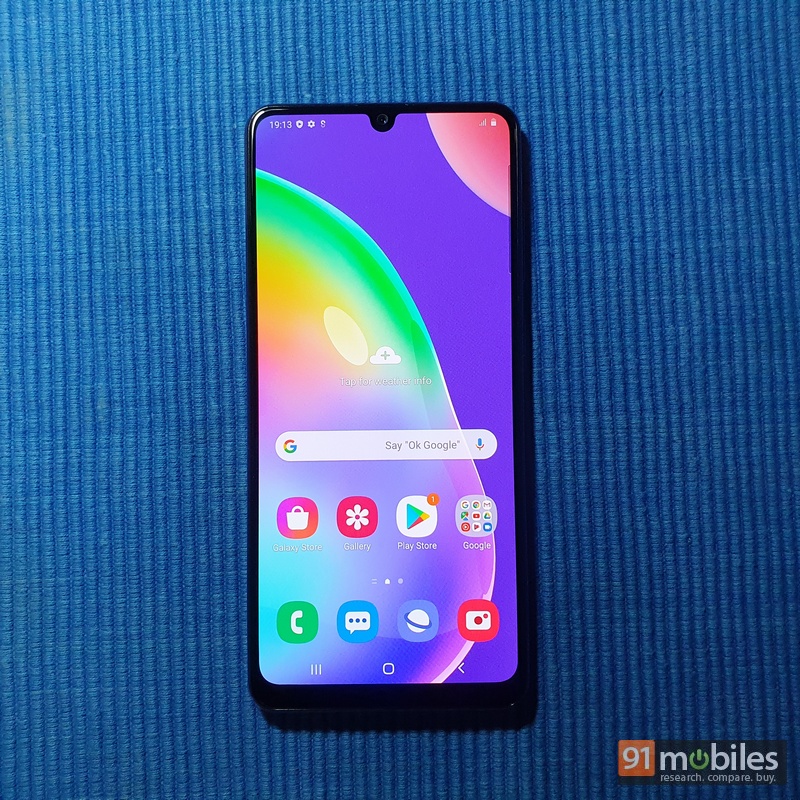 The Galaxy A31 seems to be overshadowed by the competition in many aspects. There is, of course, a capable and vivid display on the Galaxy A31, but the perceived smoothness with the 120Hz refresh rate seen on the POCO X2 is not present. The A31 has a good Helio G65 SoC, but it pales in comparison to the Realme 6’s G90T. The phone has a 48MP quad-camera layout, but it is outdone by its sibling Galaxy M31’s 64MP quad-camera layout. One could argue that the phone has a 5,000mAh battery, but so does the Redmi Note 9 Pro Max and the latter has a faster 33W charging solution. Therefore, the Galaxy A31 seems to be a bit of a mixed bag overall, but if you prefer Samsung phones, you could consider it for its display capabilities, design and the battery life.