91mobiles.com
Home Comparisons Samsung Galaxy A31 vs Galaxy M31: which mid-range Samsung phone should you...
Highlights 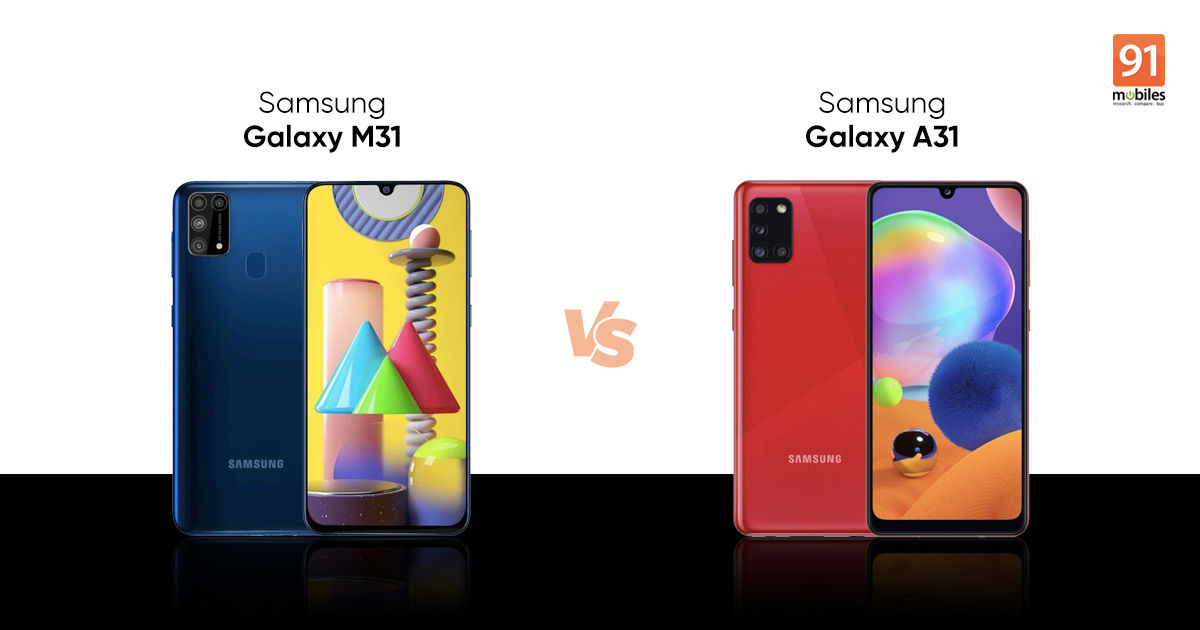 Samsung Galaxy A31 price in India is set at Rs 21,999 for its 6GB RAM and 128GB storage variant. The phone is available for sale in Prism Crush Black, Prism Crush Blue, and Prism Crush White colour options across major offline stores and online platforms in the country.

The Samsung Galaxy M31 price in India is Rs 16,999 for the 64GB storage option, while its 128GB storage model carries a price tag of Rs 17,999 following the GST rate hike in April. Samsung recently launch the Galaxy M31 8GB RAM variant with 128GB storage, which has been priced in India at Rs 19,999. The handset can be bought in Ocean Blue and Space Black hues.

Samsung Galaxy A31 vs Galaxy M31: design and display

The Samsung Galaxy A31 and Samsung Galaxy M31 come with a similar design language. The phones feature a 6.4-inch FHD+ Super AMOLED Infinity-U display with a 19.5:9 aspect ratio up front and a quad camera setup in a rectangular module on the back. The Samsung Galaxy A31 has an in-display fingerprint scanner and prism finish, whereas the M31 features a fingerprint scanner on the back panel and gradient finish. As for the spine, both phones ship with 3.5mm headphone jack, USB Type-C port, and speaker grille at the bottom. The volume rocker and power button are on the right spine.

Samsung Galaxy A31 vs Galaxy M31: processor and software

On paper, it seems the Galaxy M31’s Exynos 9611 is more powerful as it has a higher clock speed and better GPU compared to the Helio P65 SoC on the Galaxy A31. However, the phones may offer a similar real-world usage, which we can only know after checking out the Galaxy A31.

As for Samsung Galaxy M31, it flaunts a 32MP shooter on the front, while rear quad cameras packs 64MP primary Samsung ISOCELL Bright GW1 sensor along with an f/1.8 lens. The rest of the sensors remain the same as the Galaxy A31. Here again, the Galaxy M31 seems to have an edge over the Galaxy A31 as it gets more powerful primary rear and front cameras.

Samsung Galaxy A31 vs Galaxy M31: battery and connectivity

The Samsung Galaxy M31 once again seems to trump Galaxy A31 in the battery department. The Galaxy M31 features a massive 6,000mAh battery with 15W fast charging support. The battery is rated to deliver 26 hours of video playback or 119 hours of music playback on a single charge. The Samsung Galaxy A51, in contrast, houses a 5,000mAh battery, which is supported by the same 15W fast charging. In terms of connectivity, both phones feature 4G VoLTE, Wi-Fi, Wi-Fi calling, Bluetooth, GPS/ A-GPS, and USB Type-C port.

Going by the specs on paper, the Samsung Galaxy M31 has an upper hand. The phone is Rs 4,000 cheaper than the Samsung Galaxy A31 and comes with a better set of cameras, larger battery and probably a better chipset as well. That being said, you should wait for our review on the Galaxy A31 to know whether the phone delivers a better overall performance that is worth its sub-Rs 25,000 price tag.