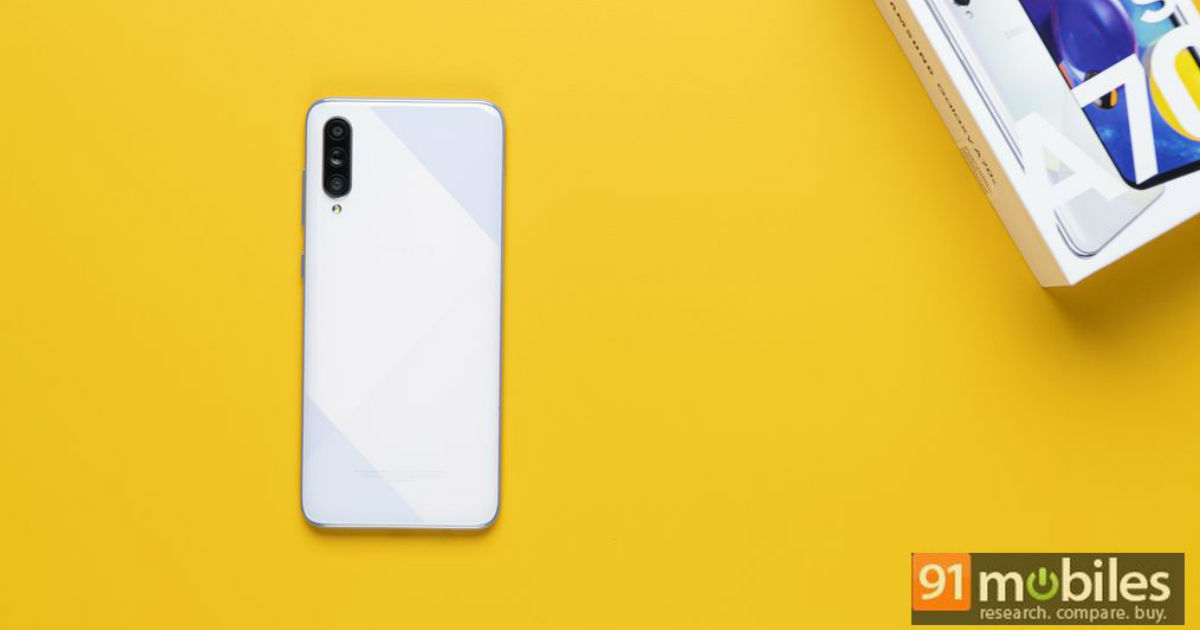 The Samsung Galaxy A70s is the third smartphone to come with the 64-megapixel ISOCELL GW1 camera in India. However, the handset is slightly special as it comes from the same manufacturer that makes the sensor. This means we can expect the Galaxy A70s to capture images with better clarity, dynamic range and colour accuracy compared to the other 64MP camera-toting offerings — the Realme XT (review) and Redmi Note 8 Pro (review). The handset recently landed in our labs, and after spending some time with it, here are our initial thoughts. 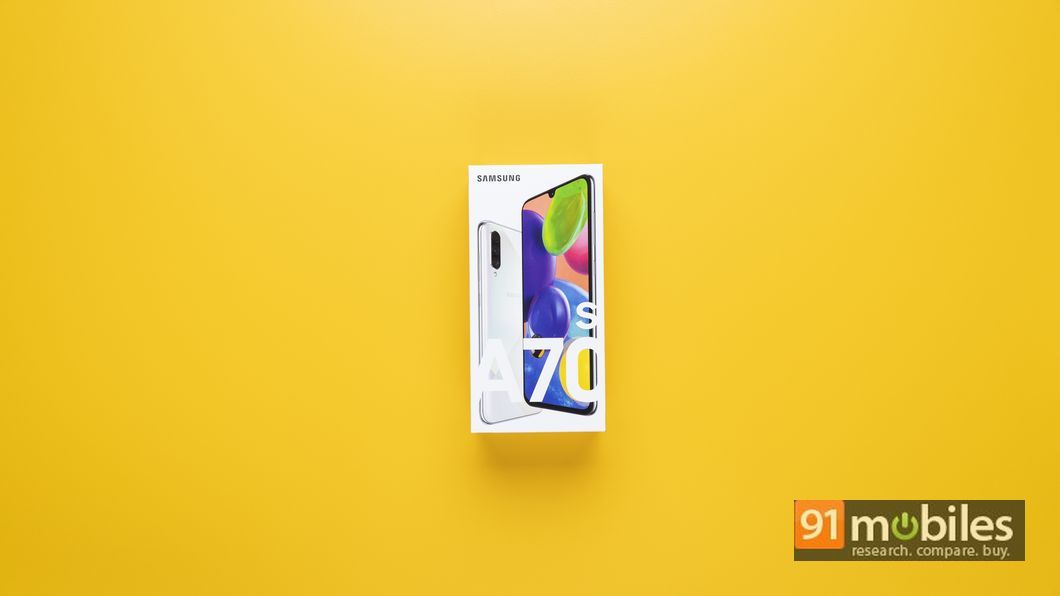 As far as Samsung Galaxy A70s’ unboxing is concerned, there isn’t anything unusual here. The phone comes packed inside a compact white-coloured rectangular box that has the phone’s image and A70s written up the top and specifications at the back. The price, IMEI number, and all other details are on the edges of the box. Inside it, you’ll get a unit of the device, a 25W Super-Fast charging brick, charging cord (Type-C to Type-C), and a pair of 3.5mm headphone jack. You also get a transparent TPU case, and quick start guide among other documentation. 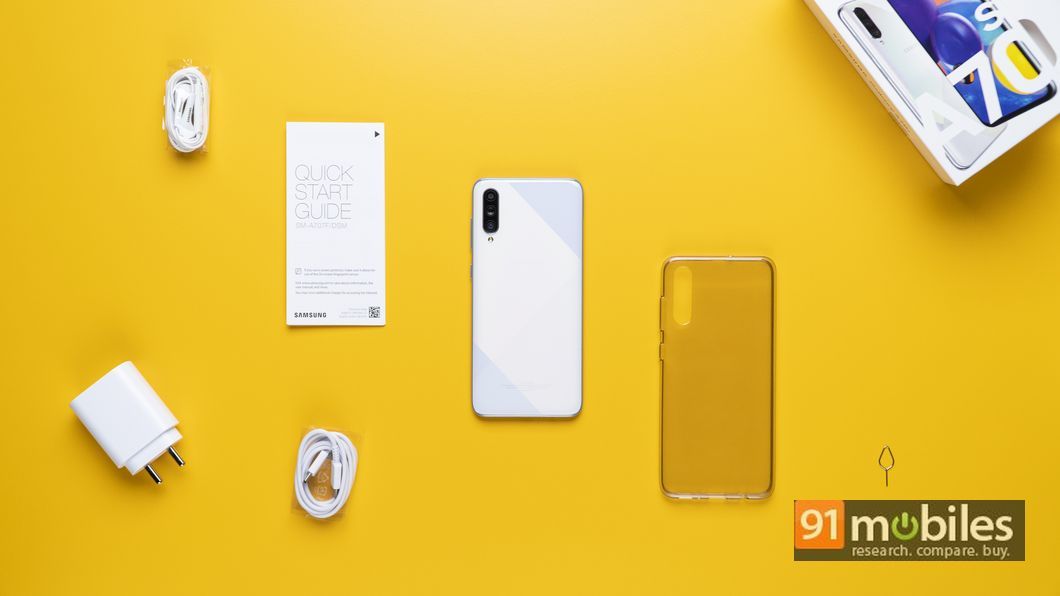 Bringing our attention to the smartphone itself, the Galaxy A70s takes its design cues from its younger sibling Galaxy A50s (review), which was launched a couple of months ago in India. In fact, barring the form factor, you’ll be hard-pressed to tell the difference between the two phones. The Galaxy A70s flaunts the same 3D prism finish on the back with glass layer up top that exhibits gradient finish and rainbow hues towards the edges when the light hits it certain angles. The fascia of the handset is dominated by a notch-toting display, resulting in 86 percent screen-to-body ratio. 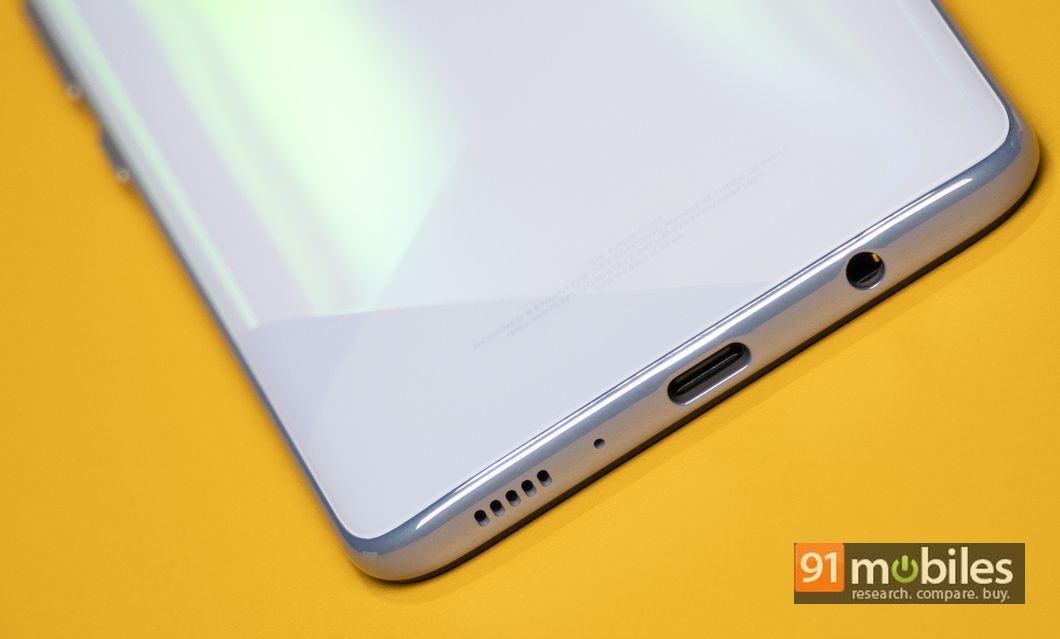 Talking about the edges of the handset, they seem plasticky and house volume rocker and power button on the right spine, a SIM-ejector tray on the left, and a microphone up top. The USB Type-C port is sandwiched in between the audio socket and speaker grill. Cutting to the chase, the Galaxy A70s looks nothing short of premium. It has got outstanding design and solid build quality. However, it goes without saying that the handset needs a case — and luckily it ships with one — to keep the fingerprints and smudges at bay. 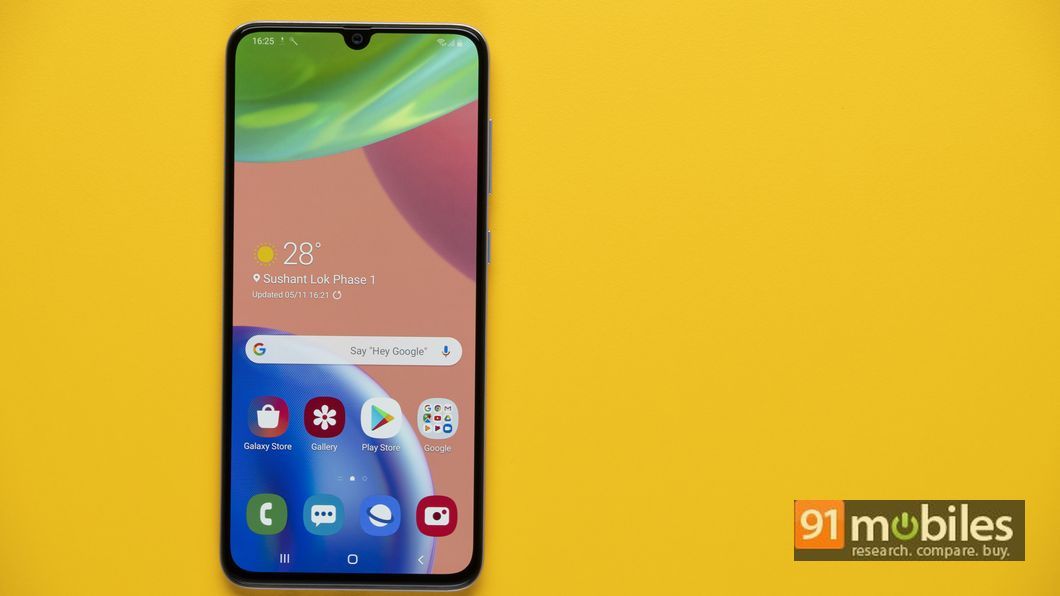 Moving on to the display, the Galaxy A70s sports a 6.7-inch Super AMOLED Infinity-U screen that bears full HD+ resolution and in-display fingerprint scanner. The phone has minimal bezels and chin on the bottom. In terms of quality, the A70s has trademarks of Samsung’s displays… which means the panel is crisp, gets bright enough to be viewed in direct sunlight, and has vibrant colours. Software-wise, the Galaxy A70s boots Android 9 Pie-based OneUI out of the box. The UI is quite good and makes it easier to use it single-handedly, which is quite impressive considering the A70s sports a rather large screen. 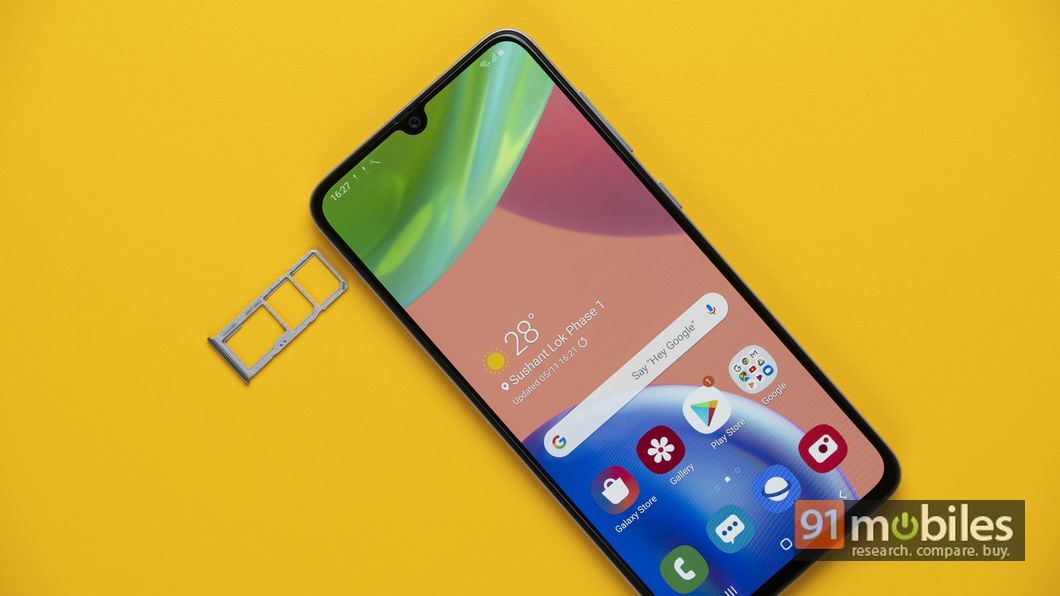 At the Galaxy A70s core lies Qualcomm’s Snapdragon 675 octa-core chipset. It’s paired with 6GB / 8GB of RAM and 128GB storage onboard, which is further expandable up to 512GB with a dedicated microSD card slot. A 4,500mAh battery fuels the handset with 22.5W SuperFast charging support. The smartphone managed to hold pretty well during multitasking, loading apps, and other activities. However, we’re yet to test it out with high-end games such as PUBG Mobile and Modern Combat 4 and hence would refrain from judging the performance. 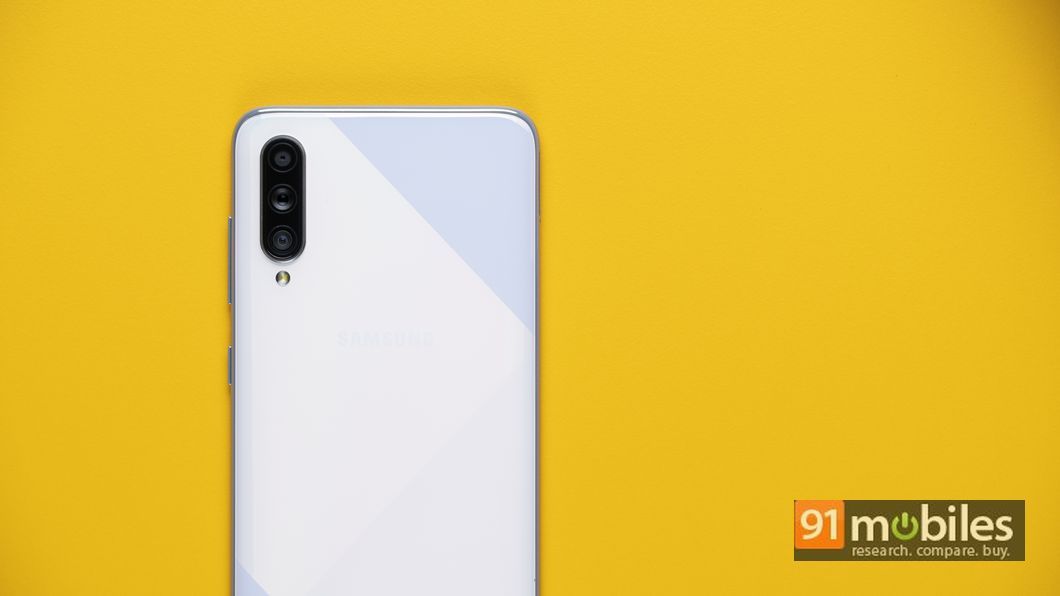 Now, let’s discuss the Galaxy A70s’ USP – the cameras. The handset packs as many as three on the back. The rear cameras comprise the much-hyped 64-megapixel GW1 sensor f/1.8, which works similar to the ISOCELL GM1 sensor with a 48-megapixel resolution by using pixel-binning tech. This is paired with a 5-megapixel depth sensor, 8-megapixel ultra-wide-angle lens, and LED flash. For selfies, the device gets a 32-megapixel f/2.0 lens on the front. We managed to take a few shots with the phone, which looked promising; however, it’s too soon to tell whether the A70s can stand tall amidst other 64MP camera phones out there. 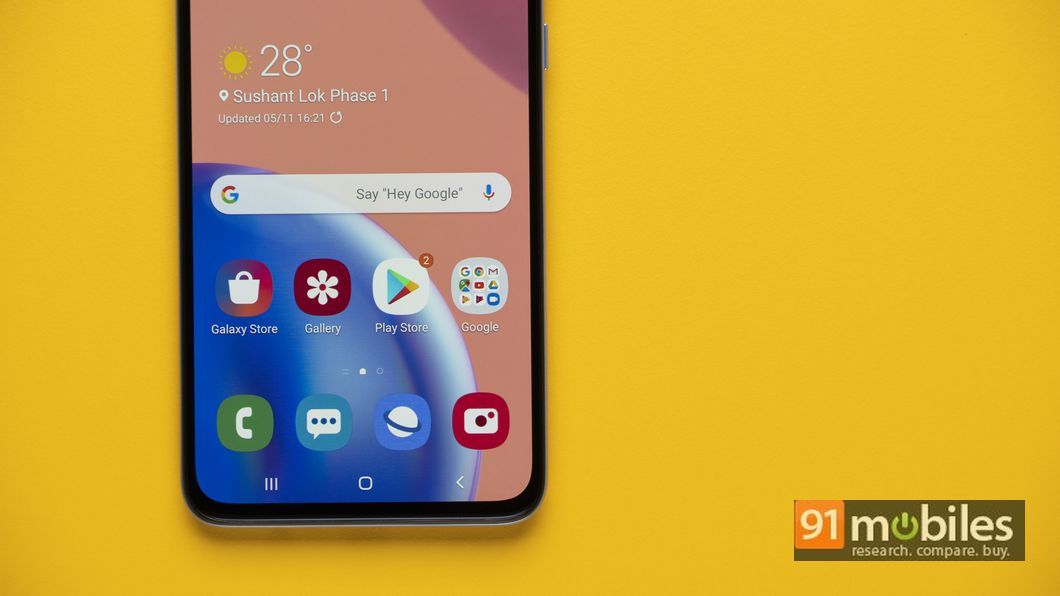 The Samsung Galaxy A70s price in India starts at Rs 28,999 for the base 6GB RAM + 128GB storage variant. The highed-end version with 8GB RAM + 128GB storage option costs Rs 30,999. Apart from the Prism White colour, the A70s is also available in Prism Crush Red and Prism Crush Black colourways. The Galaxy A70s comes with a slew of interesting features such as beefy battery and promising cameras, but for the asking price, the Snapdragon 675 chipset seems rather underpowered considering it’s usually available in phones priced below Rs 20k.