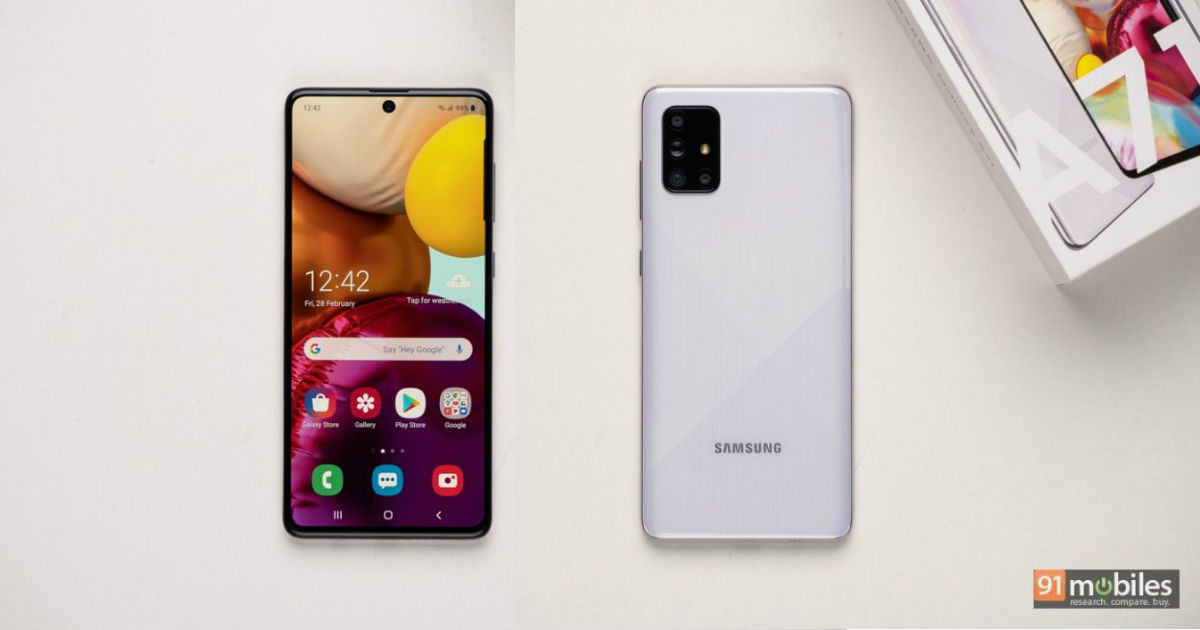 We’ve already reviewed the Galaxy A51 earlier, and today we’re looking at the Samsung Galaxy A71. The Galaxy A71 is a bigger phone compared to the Galaxy A51 and has been launched in India priced at Rs 29,999. The specs of the sub-Rs 30,000 smartphone include a Super AMOLED Plus display, Snapdragon 730 SoC, 64MP quad cameras and Android 10 out of the box. 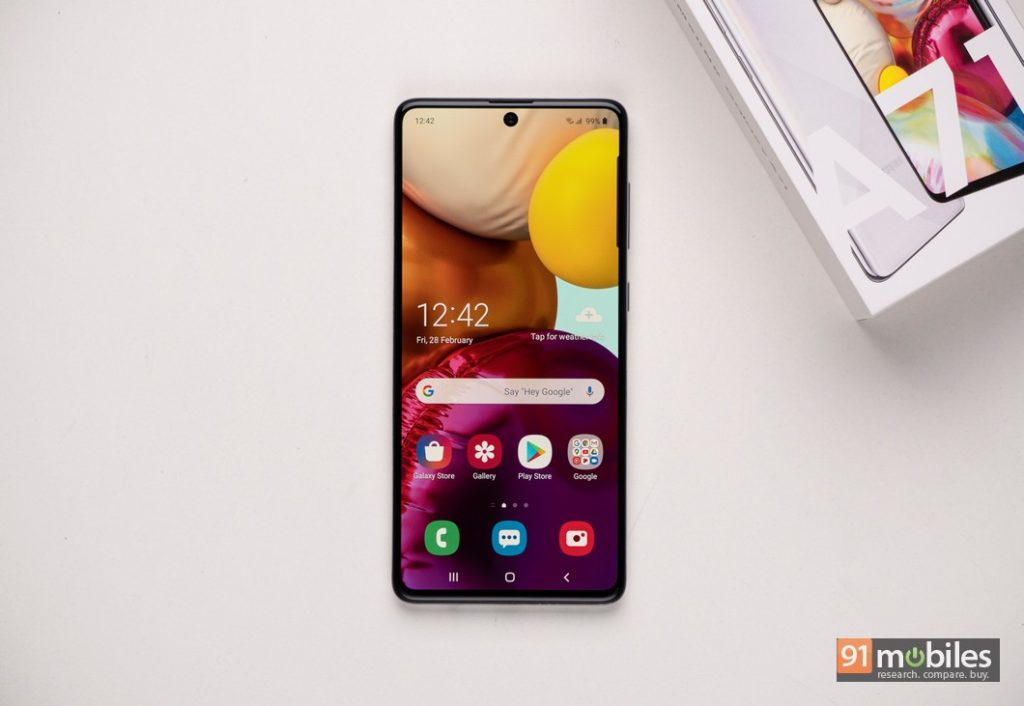 The Samsung Galaxy A71 is a solid upgrade to last year’s Galaxy A70 and Galaxy A70s smartphones. The large AMOLED display remains stunning as ever, while the internals have become more powerful thanks to an efficient Snapdragon 730 SoC at the core, which also helps deliver a long-lasting battery life. That being said, the Galaxy A71 finds itself among the likes of the phones like the Redmi K20 Pro and Realme X2 Pro that offer better specs at lower prices.

Why pay in full when you get EMIs with 0% interest?
Buy the Samsung Galaxy A71 now and pay later in flexible EMIs!
Know More

The Samsung Galaxy A71 is largely reminiscent of the Galaxy A70 and Galaxy A70s in terms of design. It has the same large form factor and big display as its predecessors. Despite the tall 6.7-inch screen and 4,500mAh battery, the phone is sleek and lightweight measuring just 7.7mm in thickness and weighing 179 grams. This makes the phone easy to hold while walking around or while playing games for prolonged sessions. 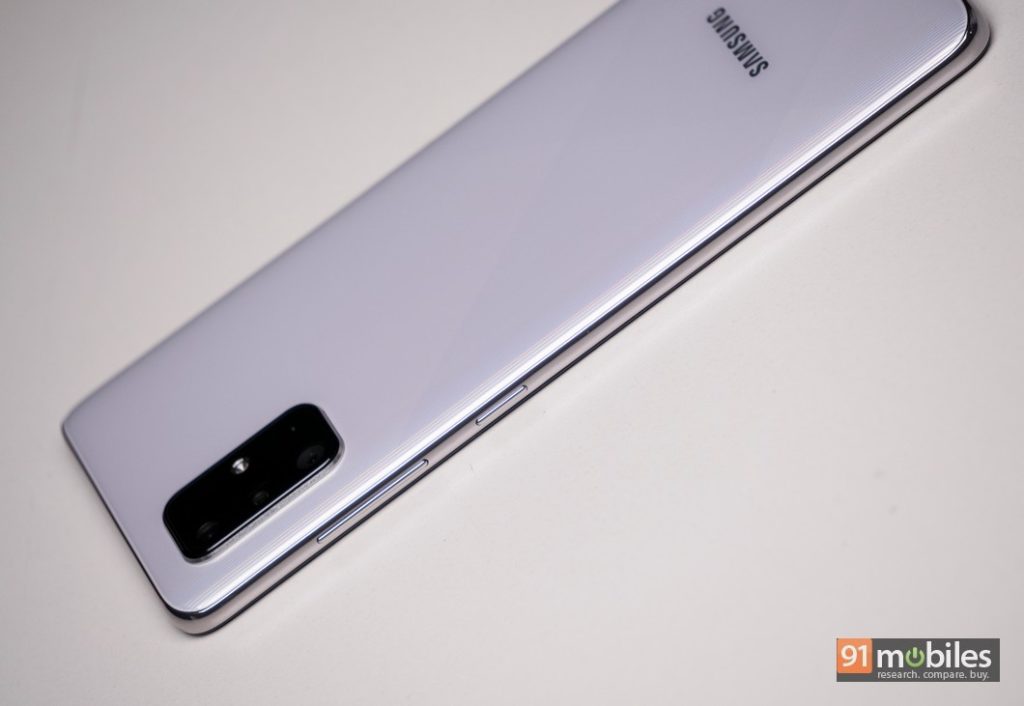 Another reason the Galaxy A71 feels good in the hand is due to its curved rear panel that almost seamlessly meets the frame. The rear panel is of a glasstic finish rather than pure glass, which may disappoint some who would have preferred the durability of Gorilla Glass. While the glasstic panel in a glossy finish kind of mimics glass, it is more susceptible to scratches and scuffs. The Galaxy A71 comes in Prism Crush Black, Prism Crush Blue and Prism Crush Silver colours. The cross pattern on the rear panel looks subtle and you get a gradient prism effect when you look at the phone at certain angles under light. Coming to the display, the Galaxy A71 gets the same tall 6.7-inch display as its predecessor. Only instead of a waterdrop notch, Samsung has opted for a centered punch-hole cutout. Interestingly, when placed next to the Galaxy S10 Lite, which also has a punch-hole display, the two phones are nearly indistinguishable. Both phones offer edge-to-edge displays and slim bezels.

The Galaxy A71 offers FHD+ (1080×2400) Super AMOLED Plus display that is striking and attractive, which does not come as a surprise. Colours on the screen look vivid and rich while blacks are deep and stunning. The screen offers excellent viewing angles and brightness levels. The handset is Widevine L1 certified, which means you will be able to stream content on platforms like Netflx and Prime Video in crisp full HD resolution. While watching 1080p videos on YouTube, content looked sharp and colours popped with saturation. You can also opt for more natural-looking colours by heading to the Display section in the Settings menu.

Samsung has increased the number of cameras on the Galaxy A70s. While the previous two models offered triple rear cameras, the Galaxy A70s gets a quad camera setup. The 64MP primary Samsung GW1 sensor captures 16MP photos and uses pixel binning to offer brighter, sharper pictures. The high resolution camera is accompanied by a 12MP wide-angle lens, a 5MP macro lens and a 5MP depth sensor.

With the main camera, you can expect crisp and detailed photos in daylight conditions. We took a bunch of outdoors shots to capture the scenery around us and found the photos to look lively with vibrant colours. Images can look a touch oversaturated with scene detection enabled, but they do look attractive. You can disable the AI to capture more natural-looking colours, which look equally appealing. The main camera offers good dynamic range when pixel binning. If you switch to the raw 64MP mode, you will lose out on HDR, so you should use this mode only if you plan to blow up a picture or zoom in and retain details. 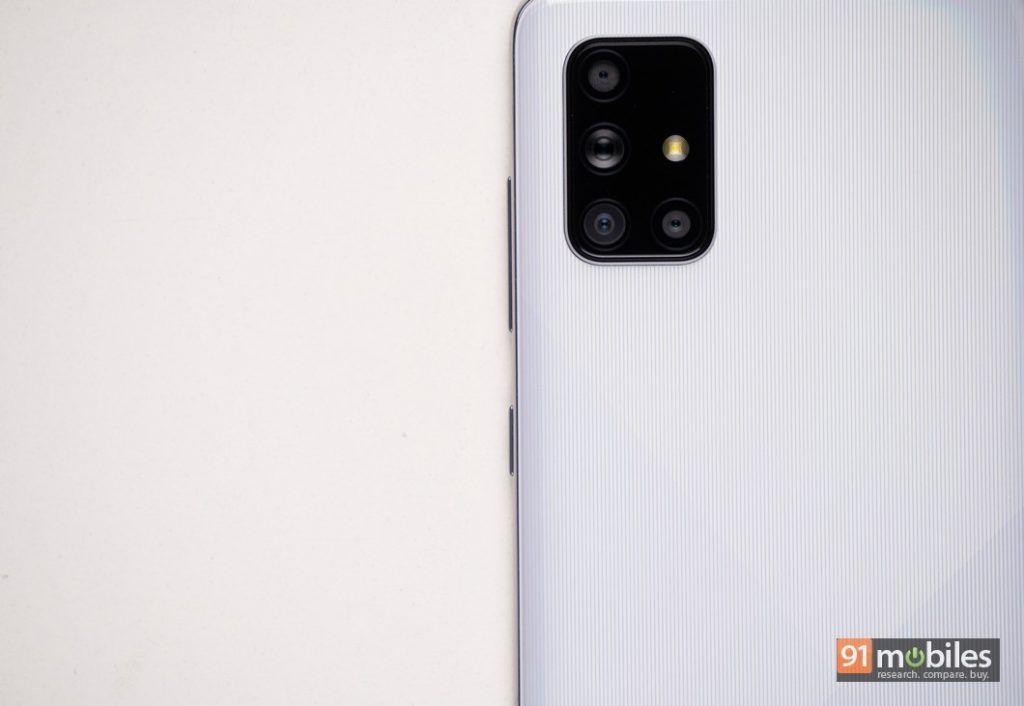 The 12MP wide-angle lens does a decent job at maintaining colour temperature. You get some amount of detail as well, but don’t expect shots to look as crisp as what you get from the main camera. As for the 5MP macro lens, it’s a handy camera for taking close up shots. However, you will need to be absolutely still if you want macros to come out clear. Four out of five times, the macros we clicked came out blurry. The macro lens also tends to drastically change the colour temperature of the subject.

Samsung Galaxy A71 camera samples
1 of 18

Talking about night-time photography, the Galaxy A71’s main camera will capture bright but noisy photos by default. If you enable the dedicated night mode, low-light photos will look clearer as the AI balances the exposure levels and reduces noise levels to some extent. Night mode is supported on both the main camera and wide-angle lens.

Both the front and rear cameras can shoot videos up to UHD resolution, which is great. You can also record wide-angle videos as well, but only the main camera supports the Super Steady mode. When enabling the Super Steady mode, you will be able to record stable, shake-free videos that look pretty decent when recording outdoors under good lighting conditions. The front and rear cameras also support Live Focus, allowing you to adjust the bokeh effect in real time. In our experience, the blur effect looks more natural when the slider is set around level 2 or 3.

The front camera is a 32MP f/2.2 sensor that can capture bright and clear selfies in daylight. While the the selfie camera is able to capture natural colours and details, it tends to smoothen facial features, which is an issue that can be found on most Samsung phones. Even with beauty effect disable, there is some softening, and this will intensify as the sun goes down. 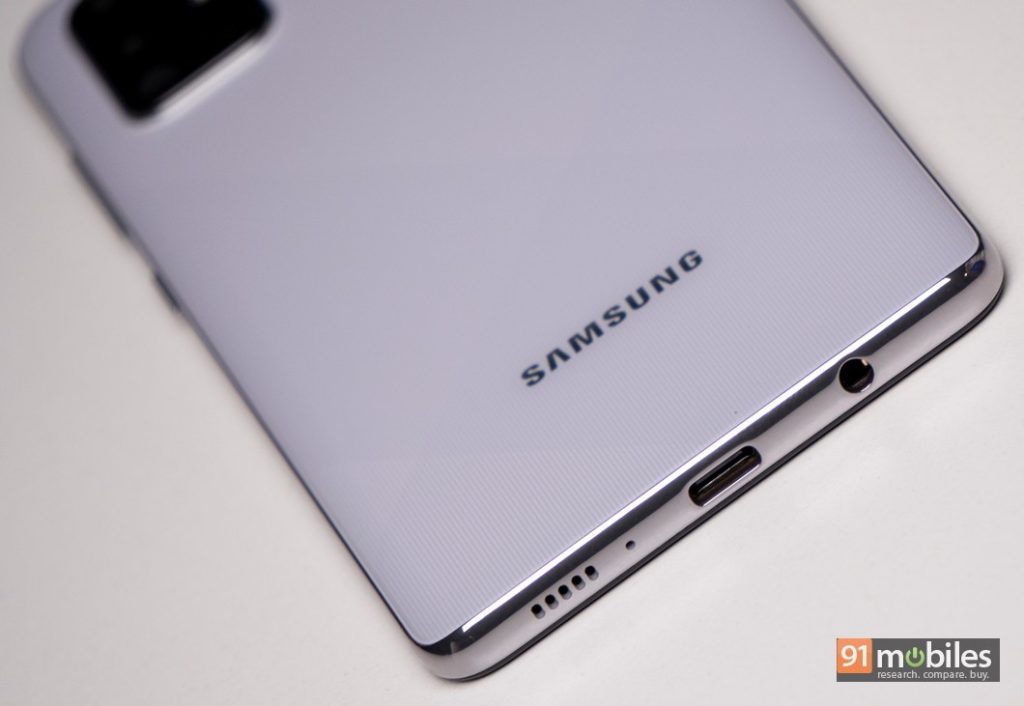 Right out of the box, the Samsung Galaxy A71 feels fast and smooth while browsing through the UI, opening apps and scrolling through web pages. We did not encounter any lags or crashes during usage. The smartphone breezes through day-to-day tasks and is also quite capable at running graphic intensive games like PUBG and Call of Duty Mobile on high graphics settings. Not only do these games run smoothly, but they look great visually on the large AMOLED display. 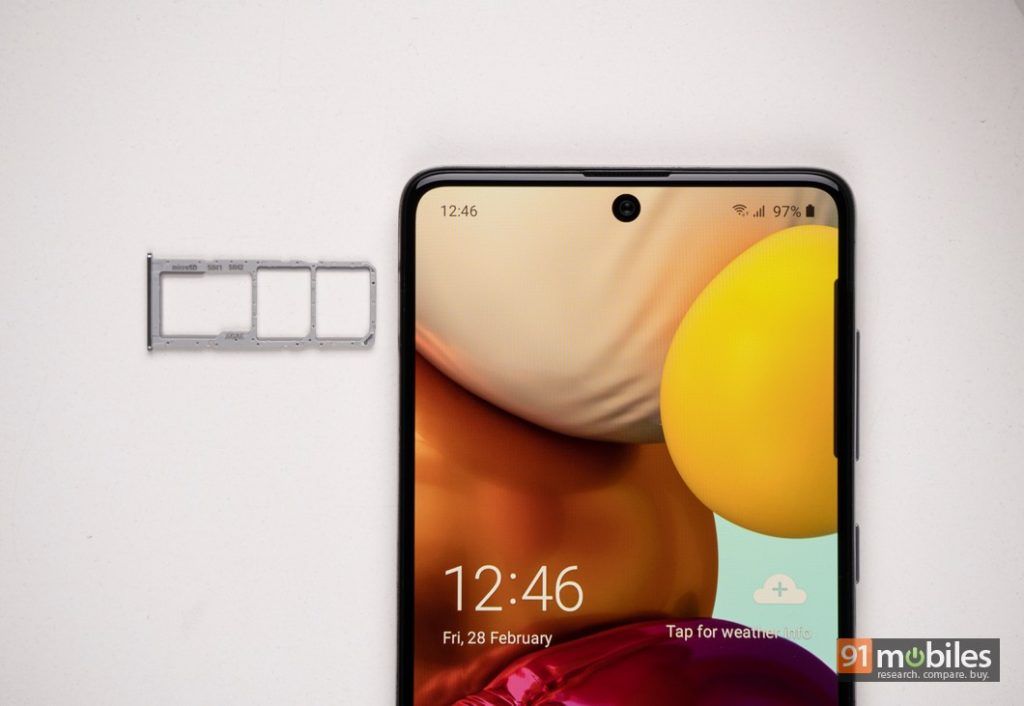 Coming to the software, the Galaxy A71 runs Android 10-based One UI 2.0. The software offers a clean visual interface that is easy to use by both young and old alike. The general user interface is easy to use and you get useful features like Samsung Pay, Always On display and dark mode, among other things. That being said, the phone comes with some bloatware as well with preloaded apps like Booking.com, Snapchat, Helo, DailyHunt and so on that can sometimes push out spammy notifications.

Talking about the in-display fingerprint sensor performance, we found it to be mostly accurate and generally fast at reading and unlocking the device. The phone also comes with face unlock that is slower and unreliable in low light conditions. The single bottom-firing speaker volume can be underwhelming if it is set on anything other than the maximum level. At its loudest, the sound is mostly clear but can get a little pitchy.

The Samsung Galaxy A71 houses a 4,500mAh battery just like the Galaxy A70s and Galaxy A70 before. We were impressed with the battery life that the previous two models offered and the Galaxy A71 is no different. The phone easily lasts well beyond a full day on average to above average usage. On days with heavy usage like playing graphic intensive games and streaming videos, the smartphone will last a full day.

In our PCMark battery drain test, the Samsung Galaxy A71 managed to last roughly 11 and a half hours from 100 percent to 20 percent, which is admirable. The phone is bundled with a 25W charger that takes roughly 90 minutes to charge from zero to 100 percent. 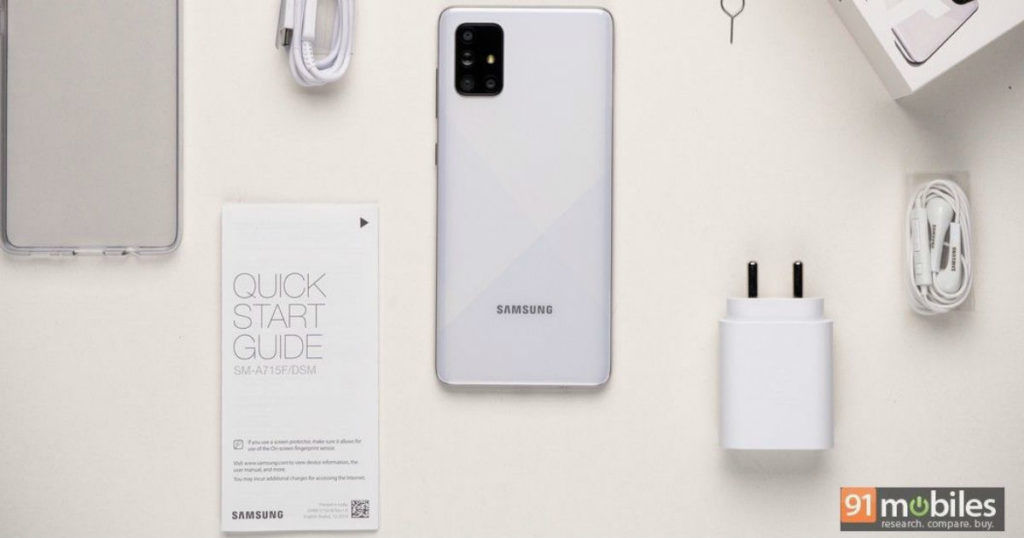 Like we mentioned earlier, the Samsung Galaxy A71 is a solid upgrade to the Galaxy A70 and Galaxy A70s smartphones. The outside remains largely the same, which is great as you get a large and attractive Super AMOLED display and a sleek design. The biggest upgrades come under the hood where Samsung has upgraded the processor to a fast and efficient Snapdragon 730 SoC along with Android 10 out of the box.

The Samsung Galaxy A71 may not be the best camera phone in this segment and the specifications are not as powerful as what you find on phones like the Realme X2 Pro (review) and Redmi K20 Pro (review). That said, the Galaxy A71 is a phone that you can enjoy watching movies and playing games on, and be assured the performance and battery life won’t let you down.