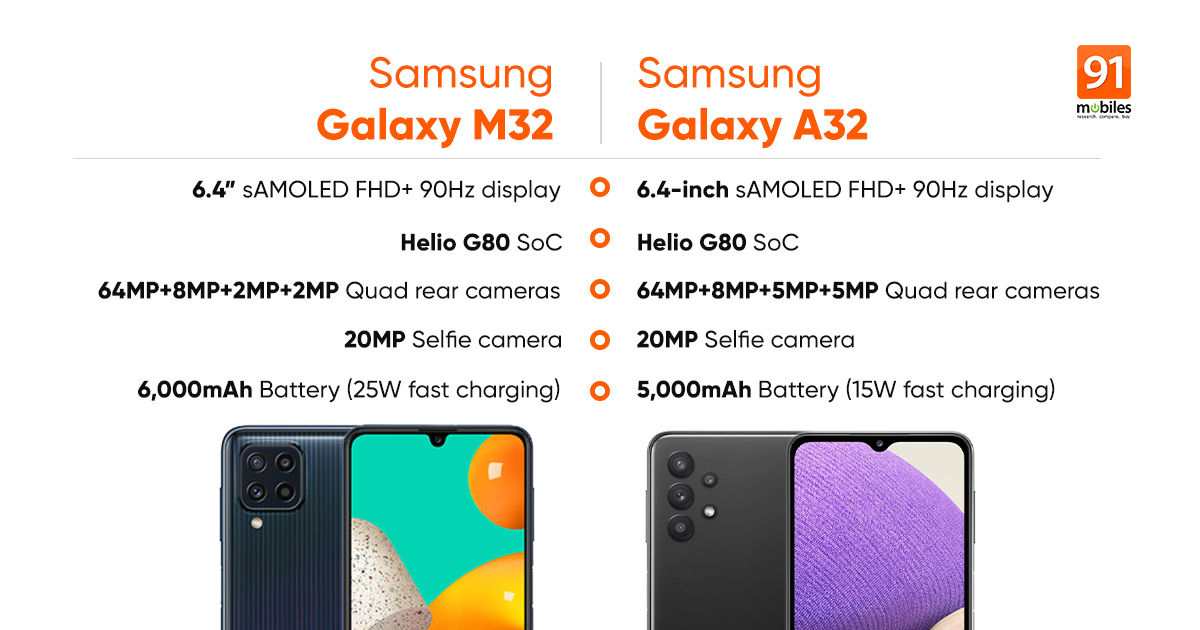 Samsung Galaxy M32 price in India and specifications were officially revealed on Monday. This is the latest mid-range offering from the South Korean giant. In India, the phone is scheduled to go on sale on June 28th. This device is the successor to last year’s Galaxy M31 and comes with upgraded hardware, more or less. The phone is equipped with a MediaTek processor and offers a quad-rear camera setup. Not so surprisingly, this device shares a lot of similarities with another Samsung smartphone, the Galaxy A32. Therefore, we’ve decided to compare the two devices and see what’s different between them.

Samsung Galaxy M32 vs Galaxy A32: prices in India

The all-new Samsung Galaxy M32 is cheaper than the Galaxy A32 in India. Samsung’s latest M series device starts at Rs 14,999 for the base variant with 6GB RAM and 64GB internal storage. The Galaxy M32 price in India for the model with 6GB RAM and 128GB storage is Rs 16,999.

On the other hand, despite a recent price cut, the Galaxy A32’s price in India is Rs 18,999 for the sole variant that comes with 6GB RAM and 128GB storage. If you’re on a budget, then the newer Galaxy M32 seems like a better choice.

Samsung Galaxy M32 vs Galaxy A32: design and display

Both devices are made from plastic and offer Corning Glass protection for the front display. Talking about the display, the smartphones feature a 6.4-inch Super AMOLED panel that offers full HD+ resolution and a 90Hz refresh rate. Brightness levels and the screen-to-body ratio on the device are also similar. However, the Galaxy A32 comes with an in-display fingerprint scanner. In terms of display performance though, you should see no difference between the two phones.

The Galaxy M32 gets a side-mounted fingerprint scanner for security instead of the in-display solution found on the Galaxy A32.

Most of the specifications remain the same on both smartphones. The differences lie in the battery capacity, supported charging speeds, and rear camera systems. Both the devices are powered by the MediaTek Helio G80 processor, which is paired with a maximum of 6GB RAM and 128GB storage. Samsung has provided a microSD card slot on both phones, offering the ability to add more storage.

Finally, coming to the battery, the Galaxy M32 has a larger 6,000mAh cell, whereas the Galaxy A32 houses a 5,000mAh unit. You also get faster-charging support of 25W on the M32, wherein the Galaxy A32 maxes out at 15W. Coming to the other features, both phones offer a USB Type-C port, Bluetooth 5.0, dual-band Wi-Fi, and 4G connectivity. The devices run Android 11 based OneUI software out of the box.

In conclusion, the newly launched Samsung Galaxy M32 is clearly a better buy when compared to the Galaxy A32. You get similar hardware and camera performance, a larger battery with faster charging while paying less. If you don’t mind not having an in-display fingerprint scanner and a slightly better-looking design, then the Galaxy M32 is definitely the one to buy.