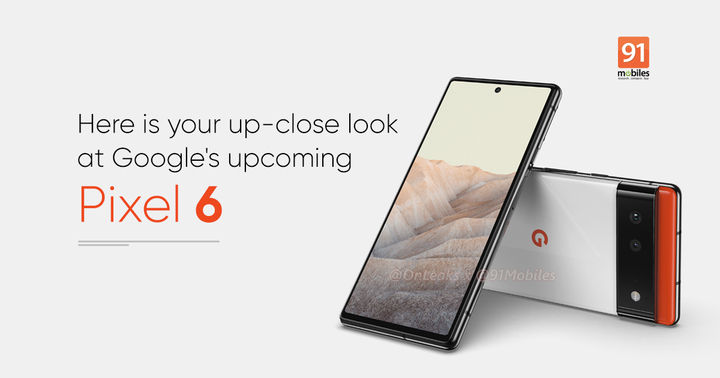 Google Pixel 6 CAD-based renders are here and they give us an even better look at the phone’s design. After tipster Jon Prosser shared some Pixel 6 renders, we now get a more detailed look at the phone courtesy of tipster @OnLeaks. The Google Pixel 6 images shared with 91mobiles show off a centre-aligned punch-hole display and a unique rear panel design that includes a dual-tone finish. Additionally, 91mobiles has also learned about a few key Googel Pixel 6 specifications. The smartphone will come with a 6.4-inch flat diplay, dual rear camera, and an in-display fingerprint sensor, among other things. The handset will also sport wireless charging and bottom-firing stereo speakers.

The CAD renders we received from @OnLeaks are in line with renders revealed by Prosser a few days ago. This pretty much confirms that the phone will come with a unique new design that sees a camera bridge on the rear panel. As for the display, we see slim bezels on the top and sides and a noticeable chin.

The Google Pixel 6’s camera details remain vague at the moment, but @OnLeaks tells us that the rear camera bridge will include two camera sensors, a small and unknown third sensor next to the LED flash, and a mic. Additionally, the handset will measure roughly 158.6mm x 74.8mm x 8.9mm (11.8mm including rear camera bump) and will come with a USB Type-C port at the bottom edge. The phone’s power button and volume rocker will be on the right side of the frame. The renders here show a dual-tone finish with a thin strip of orange above the camera bridge that matches the orange of the ‘G’ logo.

Apart from this, it’s being rumoured that Google will be using its own chips co-developed with Samsung for its upcoming Pixel 6 series. Software-wise, the handset is likely to run Android 12 out of the box. That’s all the information we can divulge at the moment! There is no word on the Pixel 6 release date at the moment, but we can expect its launch later this fall. Meanwhile, the folks over at Digit have also partnered with @OnLeaks to bring you Pixel 6 Pro (XL) renders.