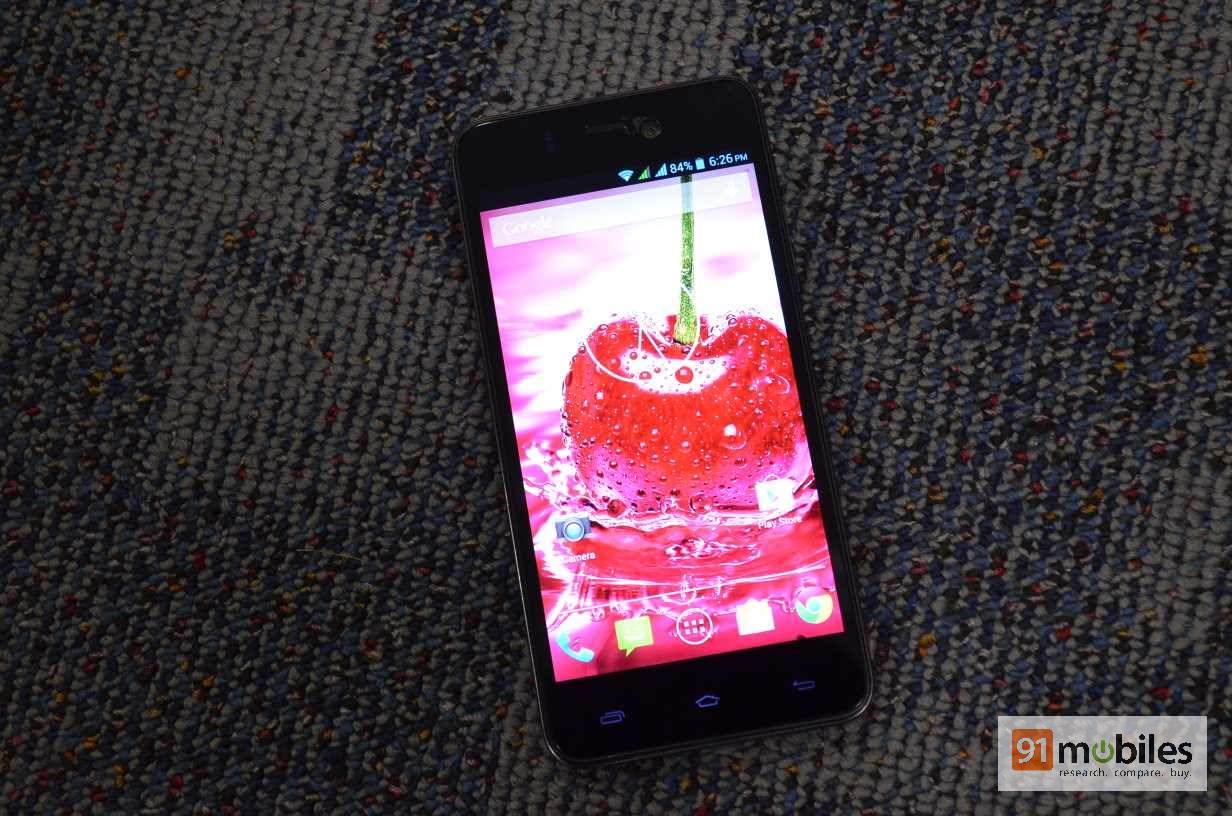 “A stylish-looking smartphone from the house of Lava” 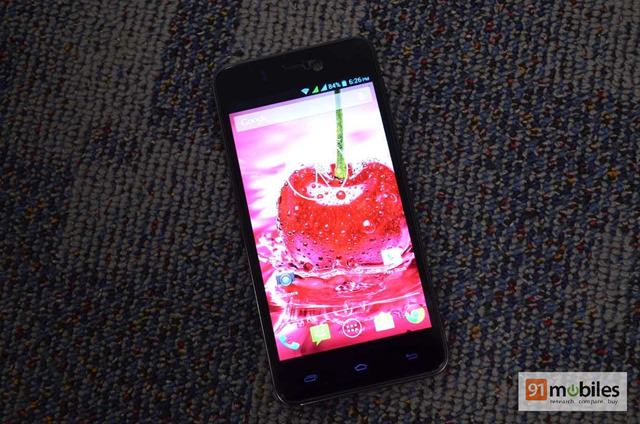 Indian smartphone vendors have come of age – from being a secondary or budget option to posing formidable competition to the likes of Samsung and Nokia. However, this has been achieved by offering compelling hardware configuration at almost half or even one-third of the price of devices from international brands. The offerings from Indian manufacturers have rarely been applauded for their looks, let alone their build quality. However, leading Indian brand Lava intends to change that with its premium and oft-rumoured Lava Iris Pro range. The manufacturer has recently unveiled the first smartphone in the range – the Lava Iris Pro 30 and we got a chance to spend some quality time with it. Does the device pack enough inside the beautiful casing? Let’s find out in this review: 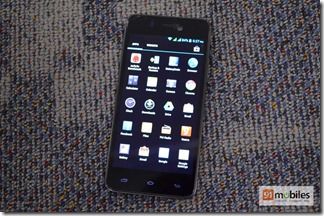 The first thing we notice in any device is its design, and Lava has taken care to set it apart from not only offerings from Indian counterparts, but international manufacturers as well. Lava claims many firsts for the Iris Pro 30, thanks to use of magnesium-aluminium alloy for the underlying network antenna using Laser Direct Structuring technology. This allows the smartphone to be lightweight at 114grams, making it the lightest smartphone in the 4.7-inch screen size or above category. The device also has a very narrow bezel of 2.2mm, and is quite slim with a thickness of 7.5mm. Along the side, it gets a faux metal rim, adding to its looks. 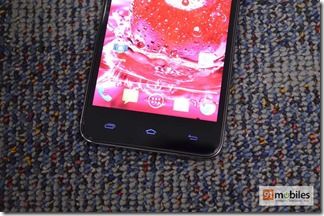 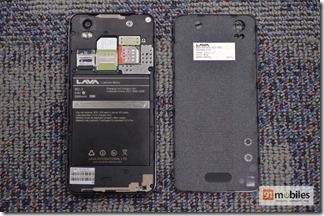 The display takes up a significant portion at the front along with the proximity sensor, earpiece and secondary camera at the top. The standard set of hardware capacitive keys for Android have a subdued presence at the bottom, and only light up when they’re tapped. The back of the device gets a primary camera with a dual LED flash at the top, and a speaker at the bottom. The rear panel can be removed to reveal the slots for a regular SIM and a micro-SIM, alongside a microSD card slot. However, the Iris Pro 30 has a non-removable battery. The back cover is paper-thin, and feels flimsy… though it’s quite bendy and that may just save it from breakage if you pry it open on a frequent basis. 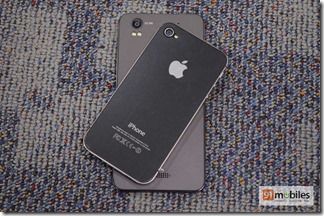 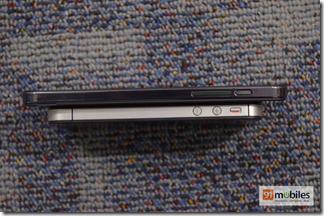 As a handset which highlights its design as its mainstay, it’s inevitable to compare it against the benchmark set by Apple’s iPhones. It has to be said that the Lava Iris Pro 30 bears a striking resemblance to the iPhone 4 / 4S and that doesn’t end at the front. The rim running around the edges along with rounded corners seems quite similar to the chamfered edges available on the iPhone. The placement and size  of the camera lens at the back is also similar to the iPhone 4S. 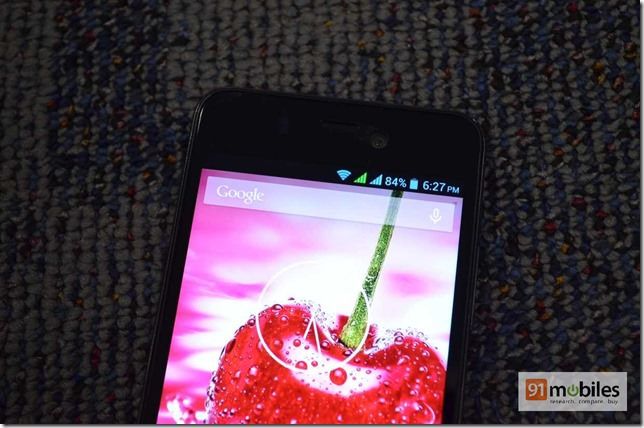 Not riding the “bigger is better” wave, the Lava Iris Pro 30 flaunts a 4.7-inch display making it perfect for one-handed use. The 4.7-inch screen size feels like a sweet spot for entertainment purposes such as watching movies or playing games on a mobile phone, and at the same time it doesn’t feel too large making it difficult to carry or use with a single hand. The One Glass Solution display from Sharp makes the display thin and also gives the device an all-black look when it’s in sleep mode. The HD resolution (1,280 x 720 pixels) delivers crisp images and text. It offer good viewing angles and is easily readable under direct sunlight. The display also gets a layer of protection with Corning Gorilla Glass to withstand minor scratches or knocks. 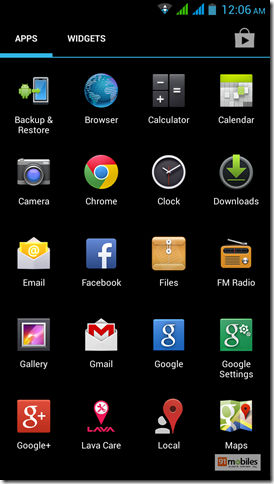 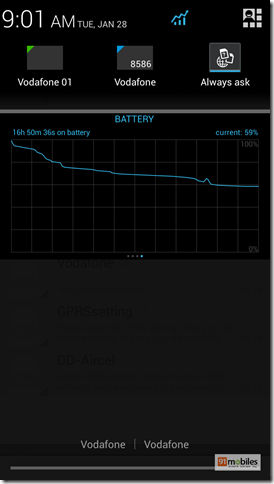 The smartphone ships with Android 4.2.1 Jelly Bean with very minimal customisation. There are absolutely no changes in the home screen, app launcher and settings menu. One neat and useful feature is a widget on the notification drawer which graphically visualises important stats for the device including battery, network, CPU and memory usage. This offers at-a-glance info for these parameters, and also analyses the trend for battery to get an indication of how soon it’s going to die. 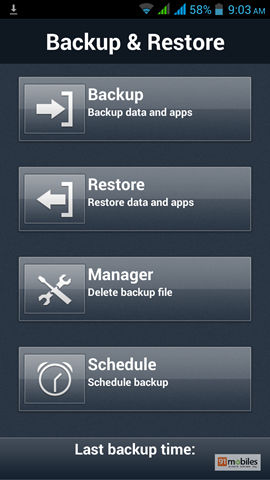 The device does get some preloaded apps like Backup & Restore, Chrome Browser and the company’s own Lava Care app which lists down the company’s service centres. What surprised us though, is that Xolo devices, another brand from Lava’s stable offers some useful apps such as Xolo Power (for battery optimisation) and Xolo Secure (for security purposes) on its devices… but there are no such apps in the Iris Pro 30. There are a couple of software features in the Iris Pro 30 such as Flip to Mute (to silence an incoming call), Automatic calling and answering the call as soon as the device is brought close to the ears. It also supports picture-in-picture mode with the default video player, allowing users to continue using an app while playing  a video on one part of the screen. 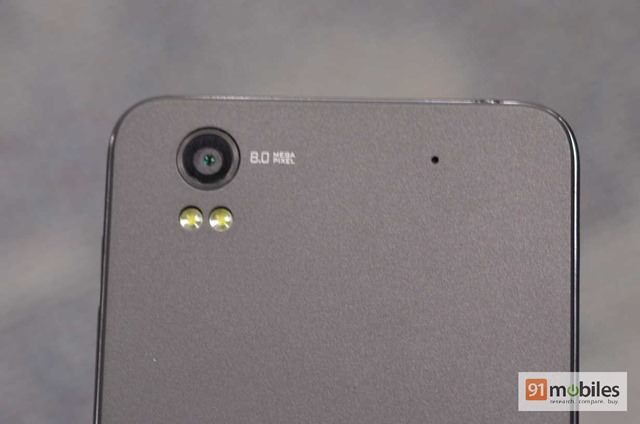 At a time when megapixel counts of smartphone cameras are straddling double figures, Lava has chosen an 8-megapixel camera sensor for the Iris Pro 30. However according to the company, the camera sensor should deliver good quality as its sourced from Samsung and is based on BSI (Backside illumination) technology. The picture quality of the camera is satisfactory, but the colours of the images weren’t vivid enough and the images look slightly washed out. To improve shots in low-light conditions, the camera is illuminated by dual LED flash. The camera interface is the same as found on all stock Android Jelly Bean devices, allowing users to capture images or videos or to click images in various modes – panorama, multi-angle view, HDR, and others. The smartphone is also capable of recording videos in full HD resolution. Here are few sample images taken from the Iris Pro 30’s camera (click to view larger size). 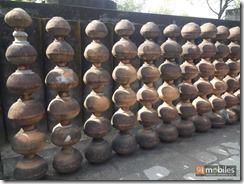 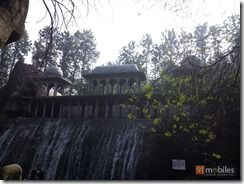 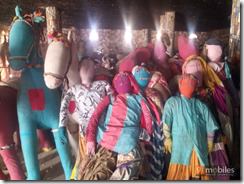 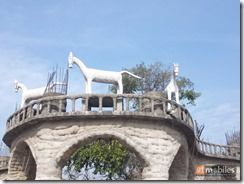 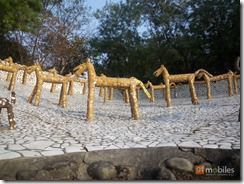 The device also offers a 3MP camera at the front, which can be used for making video calls and taking selfies. We used it for video calling through Hangouts and it delivered acceptable quality.

An average performance as a daily driver 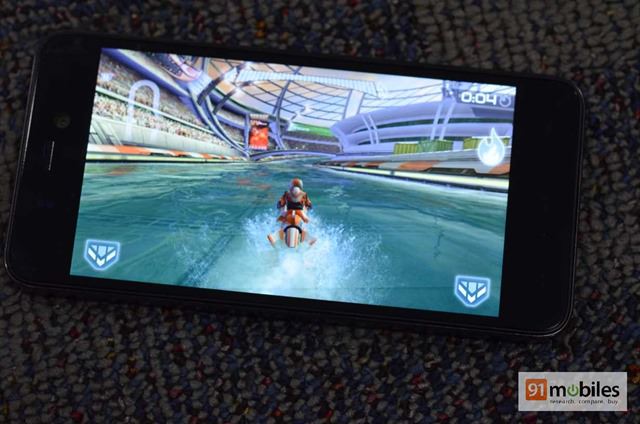 Lava started promoting its Iris Pro series back in August last year, but it saw the light of the day only now. Had it been launched at that time, its current specs would have been pretty decent, but now most of the specs packed in the device are now available in devices priced as low as Rs 8,000. Powered by the MediaTek MT6589 quad-core processor clocked at 1.2GHz, it runs routine tasks without showing any signs of lag. The processor is complemented by a PowerVR SGX 544MP graphics processing unit for a smoother gaming and media experience. The 1GB RAM also helps in ensuring that the device doesn’t lag or stutter. We played Riptide GP2 on the device and it offered good gaming experience and reasonable water effects overall, although the gameplay wasn’t as smooth as it should be. 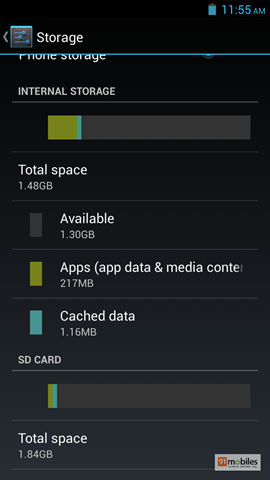 One of the biggest grouses in the hardware department is the in-built storage of 4GB, out of which merely 2.4GB is available for user data. Forget your music or movie collection, the available storage can’t even accommodate heavy games like Asphalt 8: Airborne or a large number of apps. Though the user can overcome this limit by the use of a microSD card up to 32GB thanks to the expansion slot, a memory card can mainly just serve as a media repository. 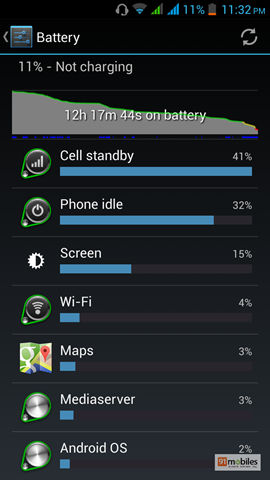 The smartphone gets a Li-ion battery of 2,000mAh capacity. The handset uses a battery-saving technology called CABC (Content Adaptive Backlight Control) which dims the backlight depending on the content being displayed on the LCD screen. This technology helps in enhancing the battery life by up to 30% as per company claims. However in our real-life usage, we weren’t able to notice any difference in the display quality or battery life. Like other handsets with similar battery capacities, the Lava Iris Pro 30 was able to last a day with moderate usage. For testing the battery life, we played a 720p video on loop and the smartphone lasted seven hours. 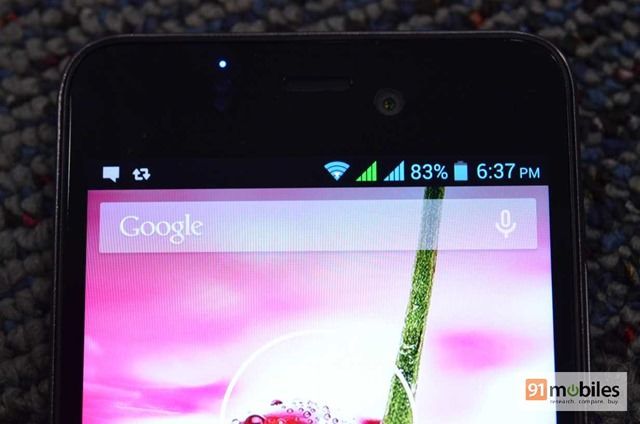 As we pointed out earlier, the Lava Iris Pro manages to break away from the tradition of similar looking smartphones from Indian brands and that too with an impressive build quality. The device can certainly turn many heads if you flaunt it in public. But if we keep design aside, the hardware specs in terms of the processor, memory and camera leave something to be desired. At this price point, the device will be up against the recently unveiled Micromax Canvas Turbo Mini A200, which matches it spec by spec. Other competitors include Lava Xolo Q1000s, Karbonn Titanium S7 and Micromax Canvas Magnus A117, which offer larger 5-inch displays, better cameras and faster MediaTek quad-core processors clocked at 1.5GHz.  The Samsung Galaxy Grand Quattro and Sony’s Xperia L also contend in this price segment, and could be good options for buyers looking for devices from international brands. If you’re looking for a stylish and pocketable device for casual usage, then the Lava Iris Pro 30 comes across as an option worth considering, though we’d like to mention that it does involve a slight compromise when it comes to performance and camera. Editors Rating: 7/10 Pros Cons