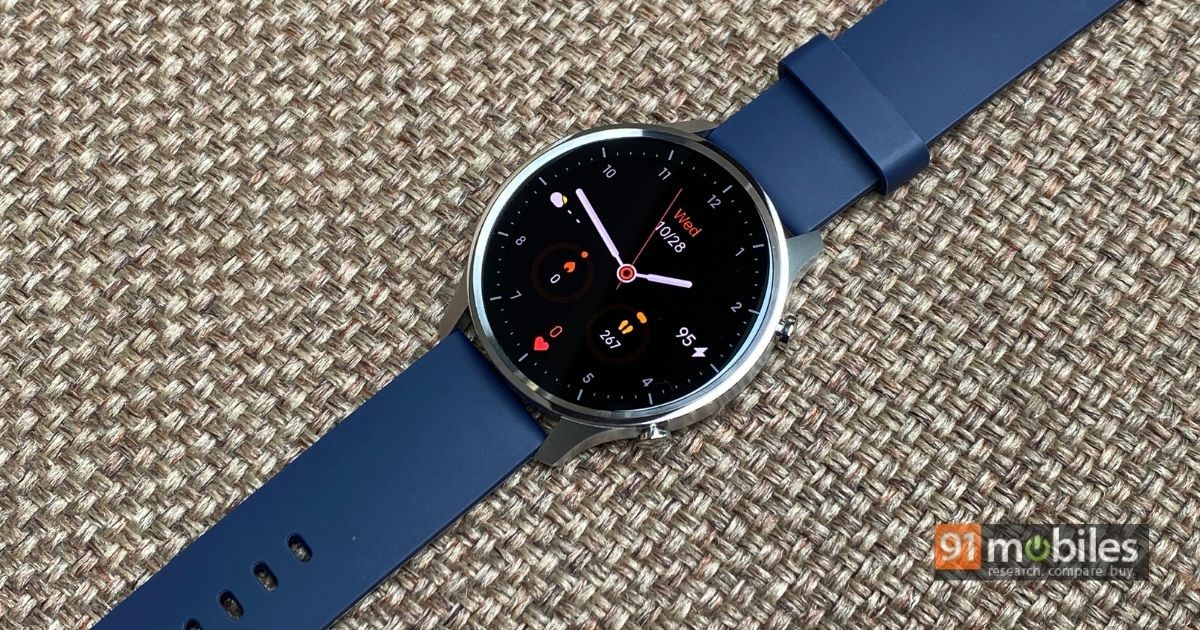 Launched alongside the Mi Smart Band 5 (review), the latest budget fitness tracker from Xiaomi, the Mi Watch Revolve comes as the very first smartwatch from the brand. Given that Xiaomi is already numero uno in the wearable segment thanks to its immensely popular Mi Band, its foray into the smartwatch segment seems to be a logical move. Priced at Rs 10,999, the Mi Watch Revolve (first impressions) doesn’t come cheap, but is packed with a ton of features, and looks stylish to boot. Let’s get a closer look at its capabilities. 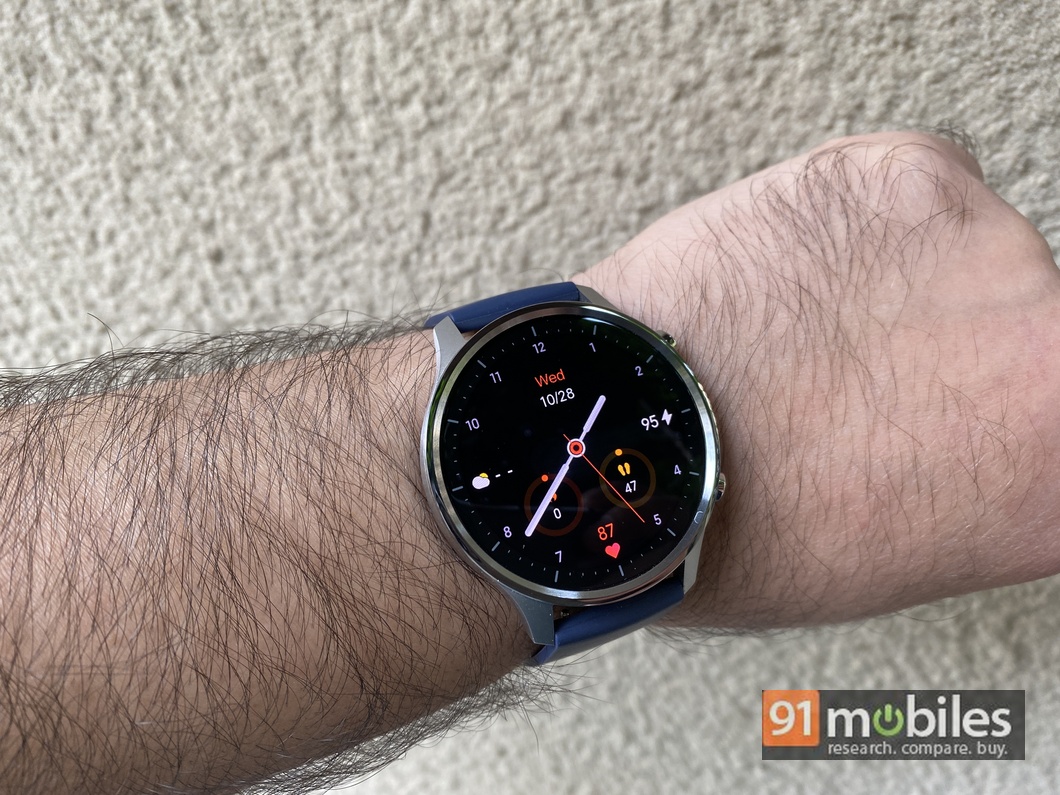 The Mi Watch Revolve follows the mantra of ‘big is beautiful’. The 46mm stainless steel frame can stand out on any wrist, and might even look disproportionate huge on slender hands. There’s a Midnight Black option, but I have the more flamboyant-looking Chrome Silver version, which is paired with a Neptune Blue silicon strap. I like chunky watches, so I must say I love the looks of this watch. The thick and large silver case, classic watch looks, the big circular display, and the hard-to-miss buttons on the side, make this wearable quite a looker. The device is lightweight as well, tipping the scales at a mere 40 grams, excluding the straps. This means it’s quite comfortable for wearing over long periods and doesn’t weigh the wrist down. The straps use standard lugs and quick release pins, so you can swap them out and use any 22mm watch strap, as per your liking. The included strap is comfortable enough, but on the flip side, feels a bit thin and flimsy. Basically, it doesn’t look like it’s made to last. Up front is the 1.39-inch AMOLED display, bearing a resolution of 454 x 454 pixels. Not only is it large and super sharp, it can get quite bright and outputs vivid colours. It’s quite responsive to touch too. At the back, you’ll see the heart rate sensor and a pair of pogo pins that enable charging. Coming to the sensors, the Mi Watch Revolve includes a gyroscope, a three-axis acceleration sensor, a geomagnetic sensor and an ambient light sensor. GPS is built in, along with Bluetooth 5.0 LE for connecting to a smartphone. A 420mAh battery runs the show. Worth mentioning is the fact that the device is water resistant to a depth of 50m, and can track both pool swimming as well as open water swimming.

The Mi Watch Revolve can track 10 different sports activities, including the two mentioned above. The device utilises Firstbeat Motion algorithm, said to be one of the world’s leading providers of data for sports and wellness. Apart from that, it offers all the usual features, such as counting steps, monitoring sleep, idle alerts, and heart rate. The health features also include heart rate variability, a stress monitor, an energy monitor, VO2 Max, breathing exercises, and idle alerts. However, it misses out on SpO2, which is a measure of blood oxygen levels, and a feature much in demand these days. 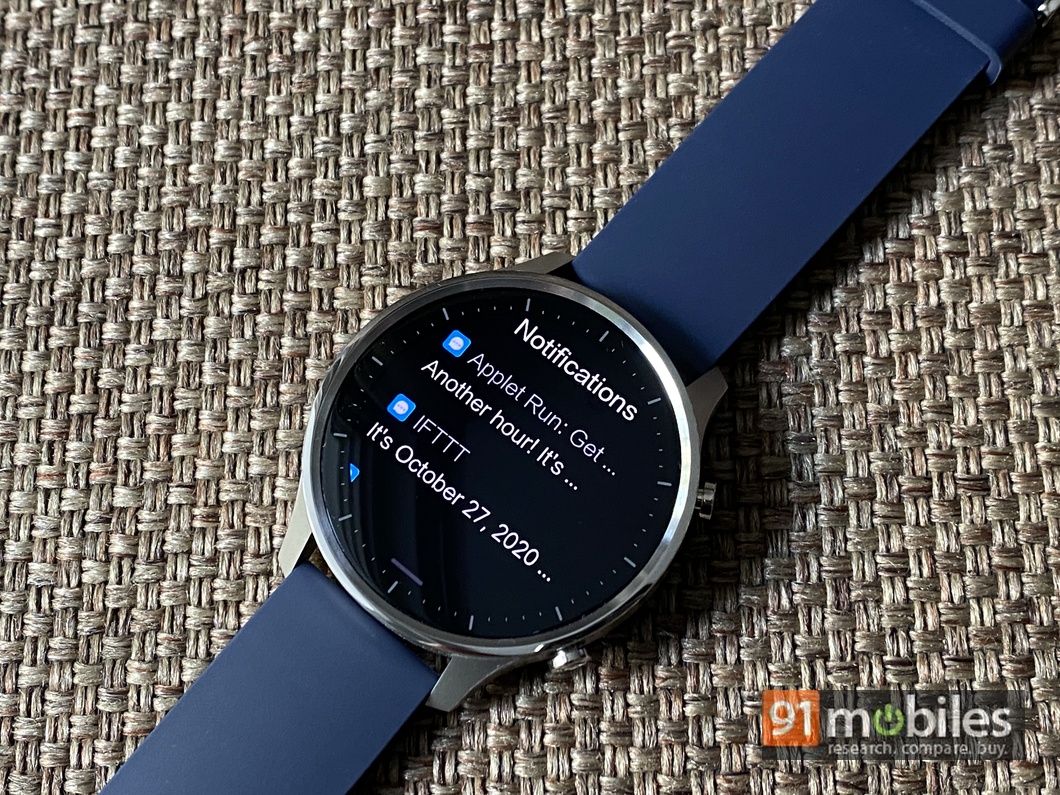 Regarding the smarts, the Mi Watch Revolve covers all the basics, including music control, alarms, stopwatch, timer, and weather. Its built-in sensors also allow it to display air pressure and there’s a compass as well. The watch also displays notifications from a paired smartphone, but those aren’t actionable. There’s no support for installing any other apps apart from the ones built in. Thankfully though, there are quite a few options as far as watch faces are concerned, and you can download and install the ones you like via the companion app. Speaking of, the watch syncs data via the Xiaomi Wear app on Android and the Xiaomi Wear Lite app on iOS. 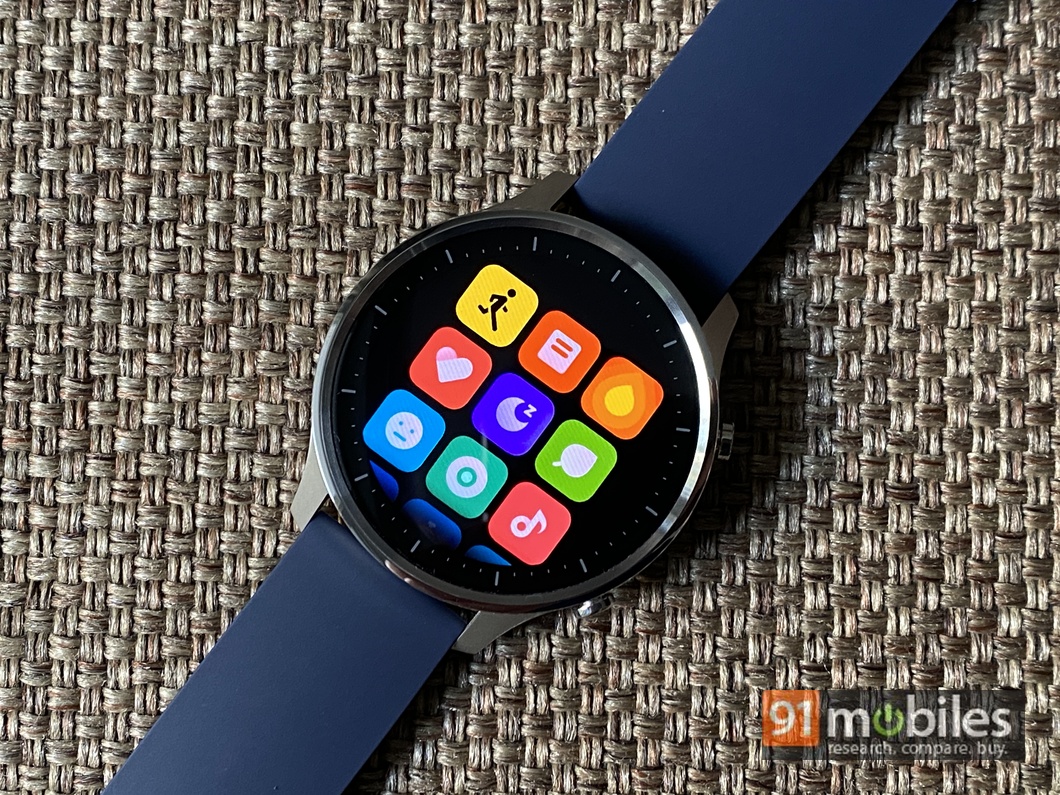 As far as the buttons on the right are concerned, the one on top allows you to jump to the watch face, or display apps, while the one on the bottom is a configurable shortcut key, set to workouts by default. The watch interface is swipe driven, so you can swipe downwards on the watch face to view notifications, and upwards for quick settings. Swiping sideways cycles through heart rate, energy meter, sleep, weather, stress, music control, and activity summary. The device supports raise to wake, a feature that works quite well. I also love the fact that there’s an always-on option for the display, and there are a bunch of specific watch faces you can choose from for the same. 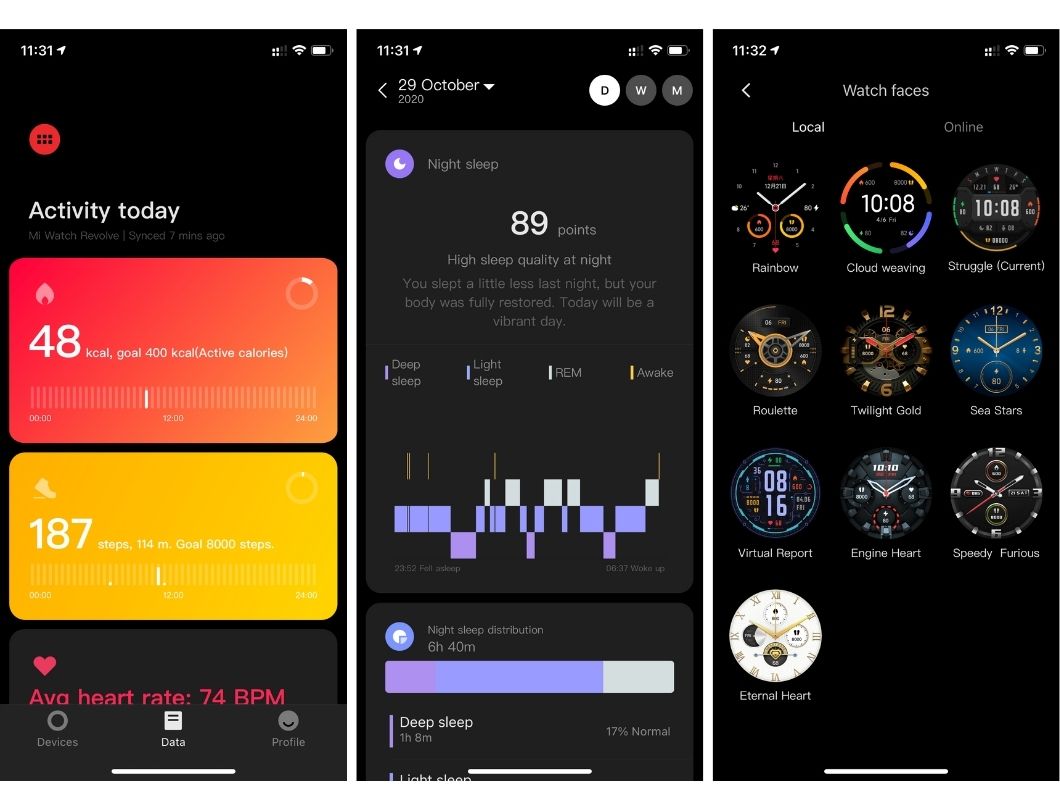 The Xiaomi Wear Lite app is intuitive enough, allowing you to set your profile, pair the watch, control its settings and view your activity history. However, it seems a tad basic, and lacks social and gamification features. That said, you can view detailed activity history, load new watch faces, control app notifications etc. The device itself seems pretty accurate as far as steps, heart rate and sleep patterns are concerned. One of the best aspects of the device has to be its battery life. It’s rated to last up to 14 days on a single charge, and it actually delivers on that promise. However, do note that your mileage could vary depending upon on how extensively you use battery-draining functions like GPS etc. For charging, you get a cradle with a USB cable that plugs into any available port on your laptop or a wall charger. The device charges fully in about 2.5 hours. 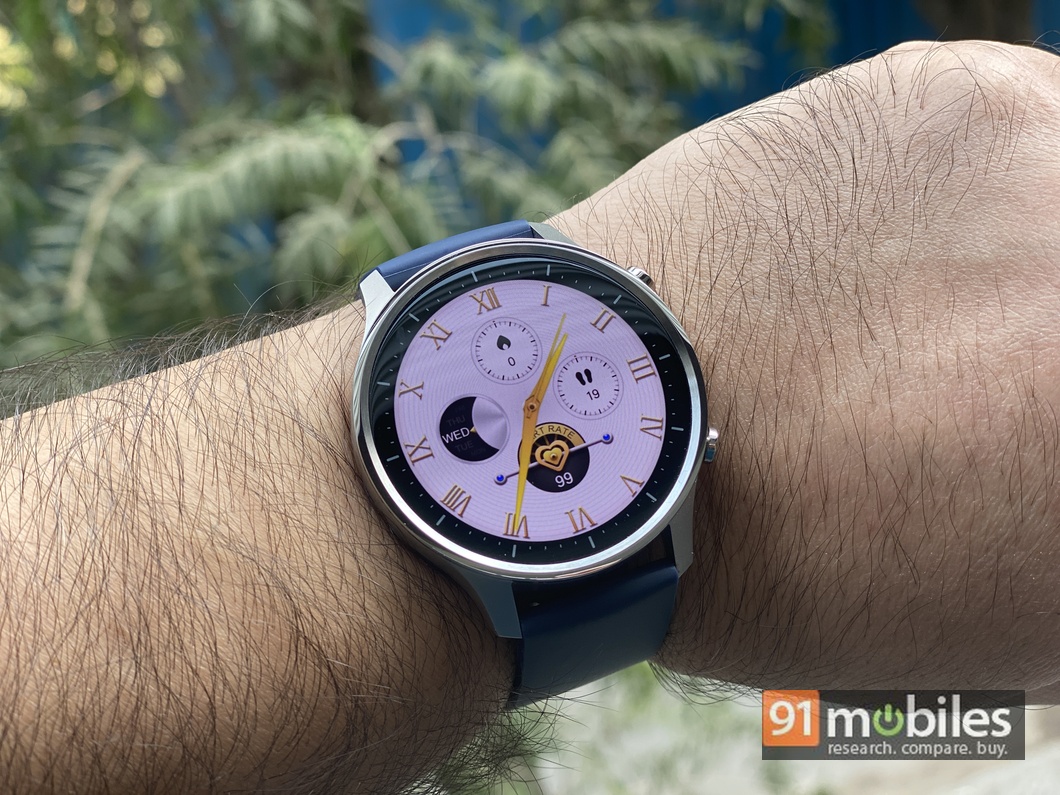 The Mi Watch Revolve, for its asking price of Rs 10,999 (Rs 9,999 inaugural price), ticks most boxes. The one feature I miss the most is SpO2, but it scores high on most other aspects. For competition, it has the likes of Huawei, Honor and Amazfit to contend with, and if you go higher up the price range, possibly some from OPPO, Samsung, and even Fitbit. In the Rs 10k price segment though, the Mi Watch Revolve comes across as a worthy option, thanks to its stylish looks, gorgeous screen, loads of health features, and long battery life.