“The Canvas Spark is among the most affordable smartphones boasting Gorilla Glass 3 protection and the latest build of Android i.e. 5.0 Lollipop. Here’s our review”

Around this time last year, Motorola brought the Moto E (review | FAQs), a device that revolutionised the sub-Rs 8,000 segment. Even though it was a budget device, it didn’t skimp on any features and offered solid hardware specs for its asking price. Leading Indian manufacturer Micromax also sensed the competition and launched the Unite 2 (review | FAQs), a similarly-priced offering with better internals. Both the devices, along with a few others, popularised the category giving a rise to the term ‘budget performance’, and also played an important role in bringing down the average sales price of the phones purchased online. 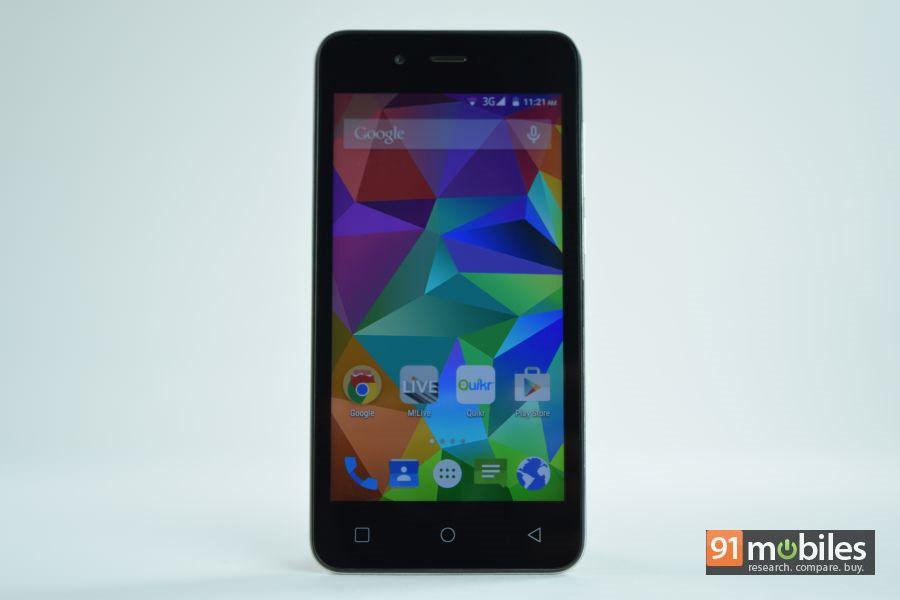 Fast forward to this year and now Micromax is aiming to shake up the entry-level segment (below Rs 5,000) with its latest offering. Called Canvas Spark Q380 (first impressions), the phone has already impressed us during our quick hands on. But do the impressions remain the same in real-life usage? Let’s find out.

In the age of phablets, the Micromax Canvas Spark instantly stands out with its handier size. Built around a 4.7-inch display panel, the device can be easily used single handedly. It features a standard candybar design with some interesting design elements. 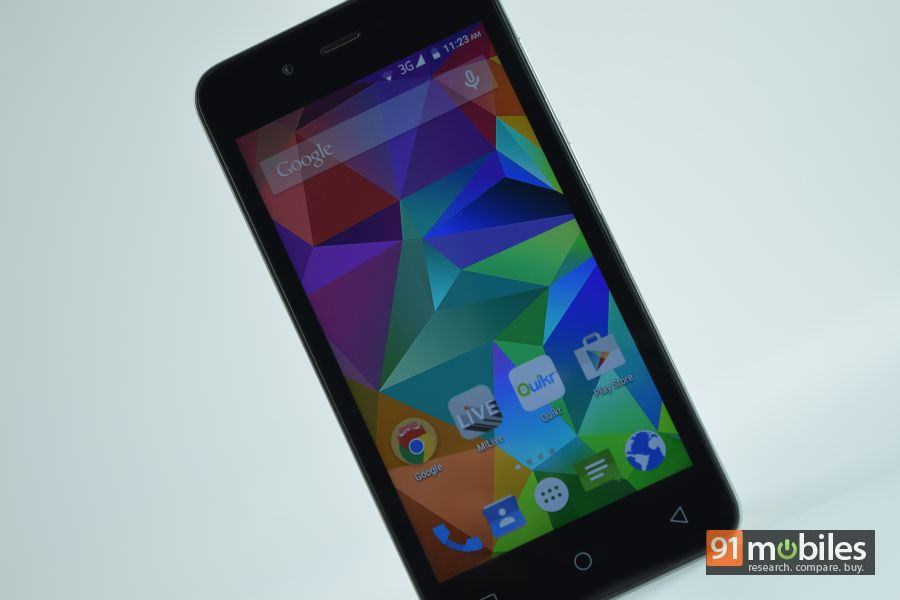 Up front, you’ll find an earpiece along with a notification LED and a front-facing sensor above the display and a row of capacitive keys below. The keys aren’t backlit, but follow Lollipop guidelines, with the first button being used for accessing recently-opened apps, the one in the middle for jumping to the homescreen and the last key for returning to the previous screen. 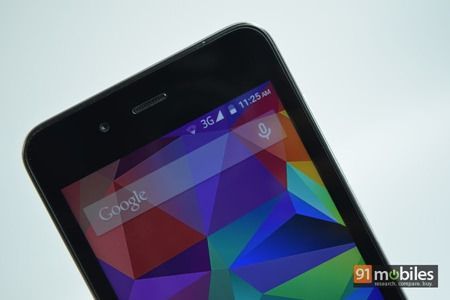 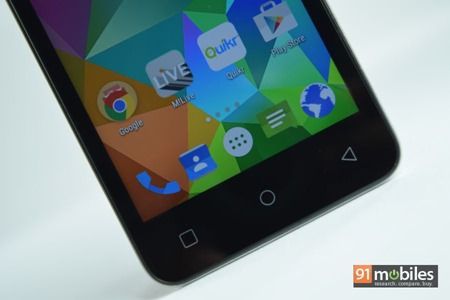 On the right spine, you’ll find the volume keys as well as a power toggle, while the left edge is devoid of any ports or buttons. Up top lies a 3.5mm headphone socket, whereas at the bottom, the Canvas Spark has a micro-USB port. 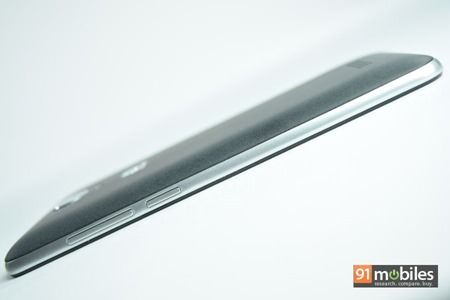 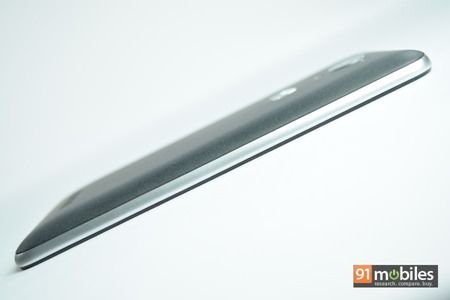 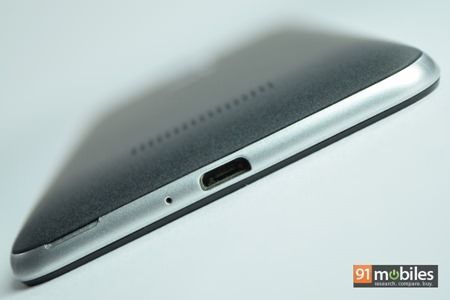 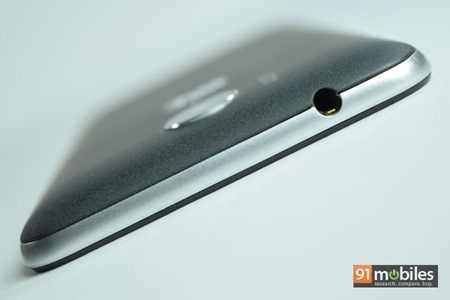 The back of the Canvas Spark is where the things get a little interesting. The rear cover of the smartphone sports a sandstone-like finish which looks pleasing, and offers a good feel in the hands. It also ensures a better grip when the hands are sweaty. Here you’ll find the primary camera which juts out slightly with an LED flash, followed by Micromax insignia and a speaker mesh down below. Opening the back panel will give you access to a pair of SIM slots and a microSD card slot, though the battery isn’t removable. 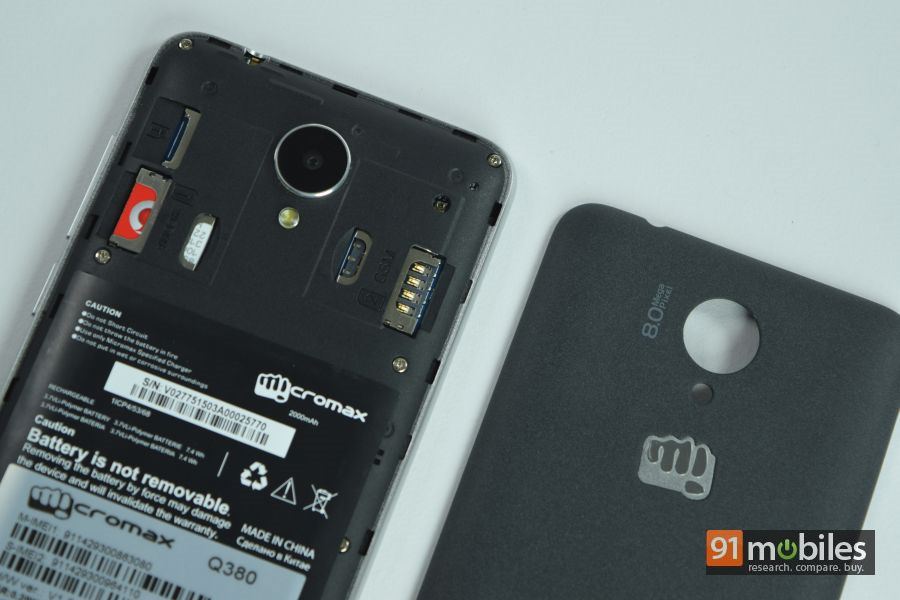 While our review unit is available in black with a silver trim, it’s also available in white with a gold trim. At 8.5mm thickness and weighing 134g, the Micromax Canvas Spark might not be the slimmest or lightest phone around, but it does feel good in the hands. Additionally, its looks and build quality defy the asking price.

The 4.7-inch IPS display panel of the Micromax Canvas Spark features a resolution of 960 x 540 pixels. The resolution isn’t much when 720p has become a standard, but the Indian brand has ensured that the display offers brilliant visuals. It’s reasonably sharp and has decent viewing angles. However, reading it under sunlight was slightly difficult due to low brightness levels. 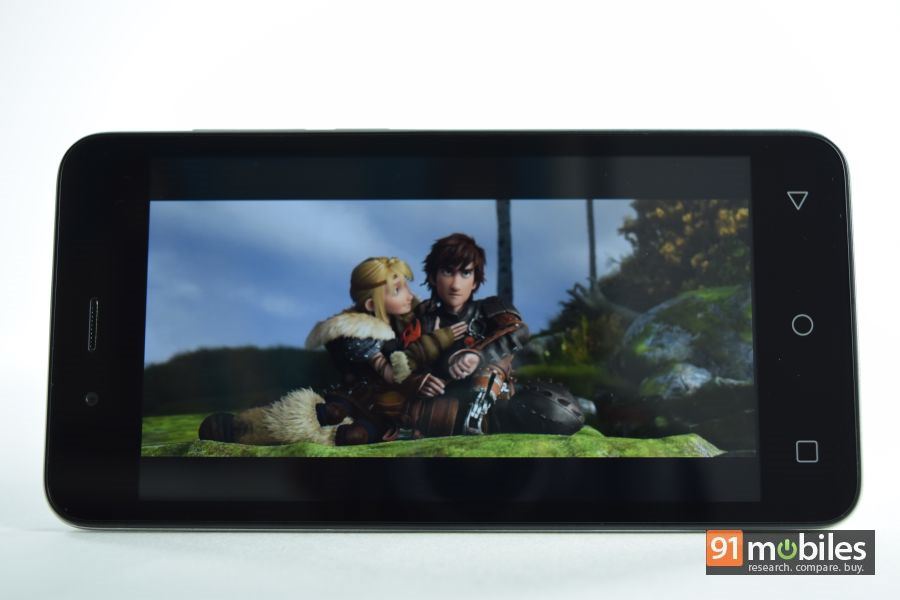 The Canvas Spark is among the very few options that offer a Corning Gorilla Glass protection to its display in this price band. Thanks to Gorilla Glass 3, the display will be able to withstand minor scratches and knocks.

While Google has demoed the upcoming Android M at this year’s IO conference, the fact of the matter is that the current version, Android 5.0 Lollipop hasn’t reached the masses yet. The Canvas Spark is the only sub-Rs 5,000 smartphone to boast this platform. The device also offers the sweet taste of Lollipop in an unadulterated form, with hardly any changes in the visual aspect. 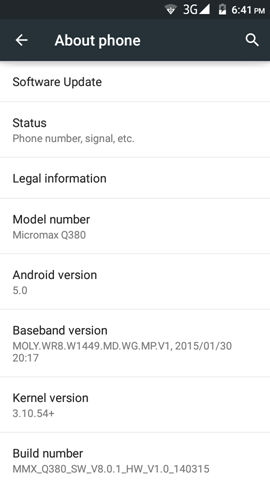 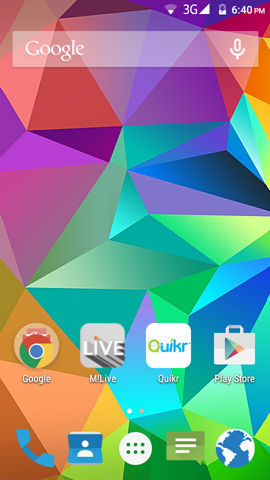 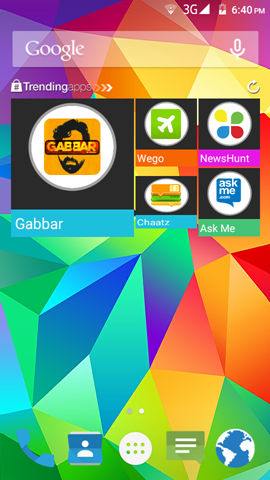 You can access notifications on the lock screen itself, get two-drop notification panel and above all enjoy Material Design in its full glory. However, that doesn’t mean that Micromax hasn’t played with it at all. It has filled the phone with as much apps as possible. There are close to 15 apps such as Askme, Chaatz, Newshunt, Snapdeal, etc. While you can uninstall most of the apps, you can’t remove the default ones. 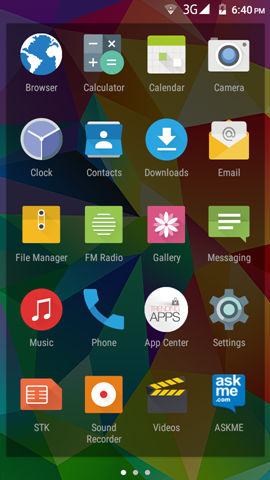 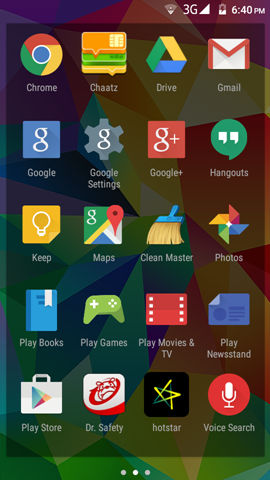 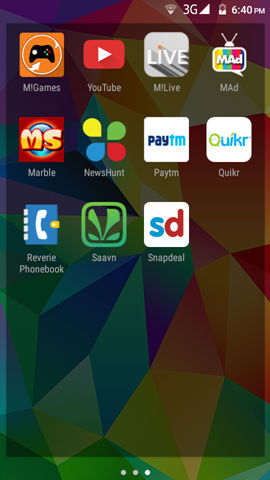 Apart from these apps however, the device offers a stock experience. But on the downside, we found a few stability issues such as random restarts and freezes.

A decent camera for its price 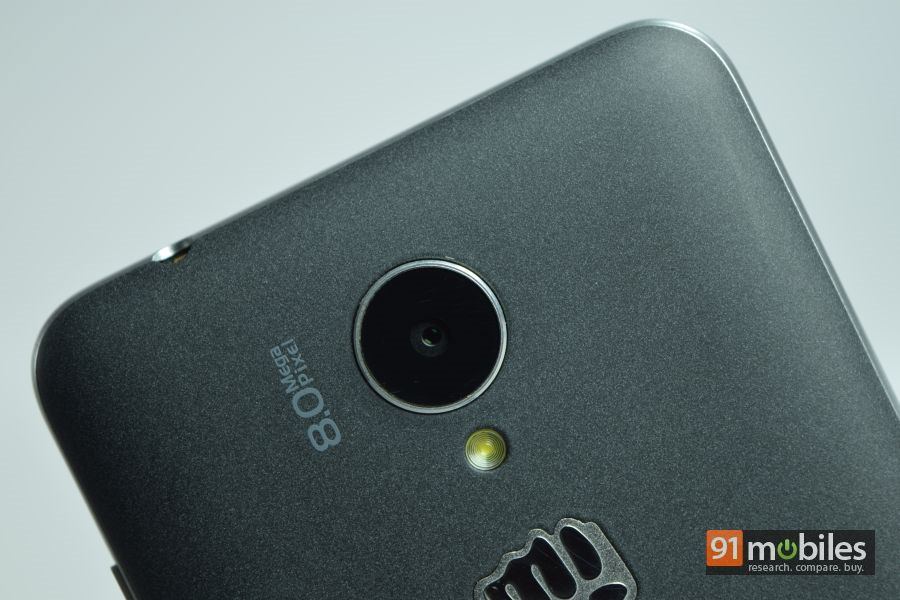 With an 8-megapixel autofocus camera at the back and a 2MP secondary shooter, the Micromax Canvas Spark instantly stands out from the competition, as most similarly-priced options offer a combination of 5MP and VGA snappers. The camera app offers the stock interface with options to enable the usual modes such as panorama and HDR. 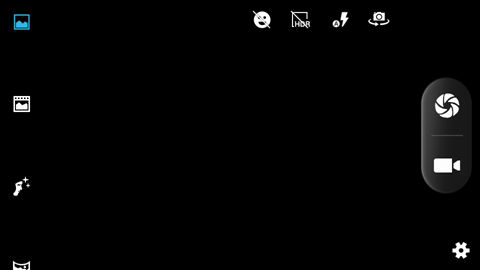 Talking about the image quality, the phone might not dazzle you with its shots, but they will serve your needs well for sharing on social networks or capturing a memory. The landscape shots offers good colour variance, but don’t seem as sharp, especially when zoomed in. The same is the case with close-up photographs. While they look good, there’s a lot of blurriness when they’re viewed in their original resolution. Images captured in night or low-light environments are also quite noisy, though the LED flash is quite useful and maybe even too strong for our liking. Check out a few images captured by the Micromax Canvas Spark. 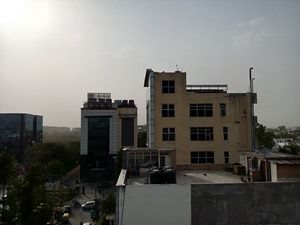 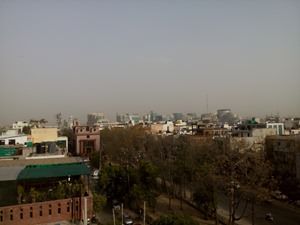 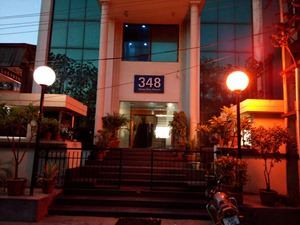 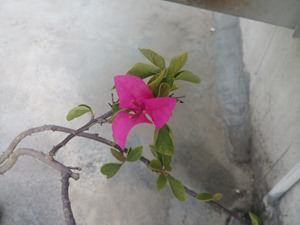 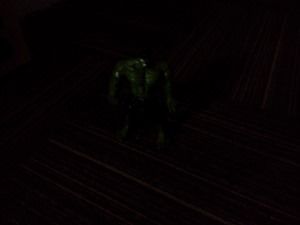 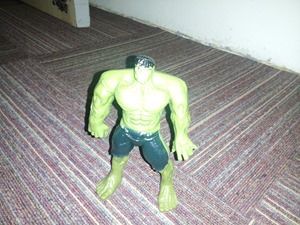 The main camera is also capable of recording videos in HD resolution. If you are a lover of selfies, then the 2MP front camera on the Canvas Spark would be able to give you decent output in ample lighting conditions, even though they the images turn out quite noisy.

Under the hood, the Micromax Canvas Spark hides a MediaTek MT6582 SoC, which offers four Cortex-A7 cores ticking at 1.3GHz. The processor is mated to a gigabyte of RAM. It’s a capable combination, especially at this price band and manages to offer a smooth experience minus the problems posed by the software. When it runs well, then even games work without hiccups, but otherwise we found serious lag even while navigating between screens or playing HD videos. The same experience was there while running graphics-heavy titles such as Riptide GP2 and there were noticeable frame drops and jerks. 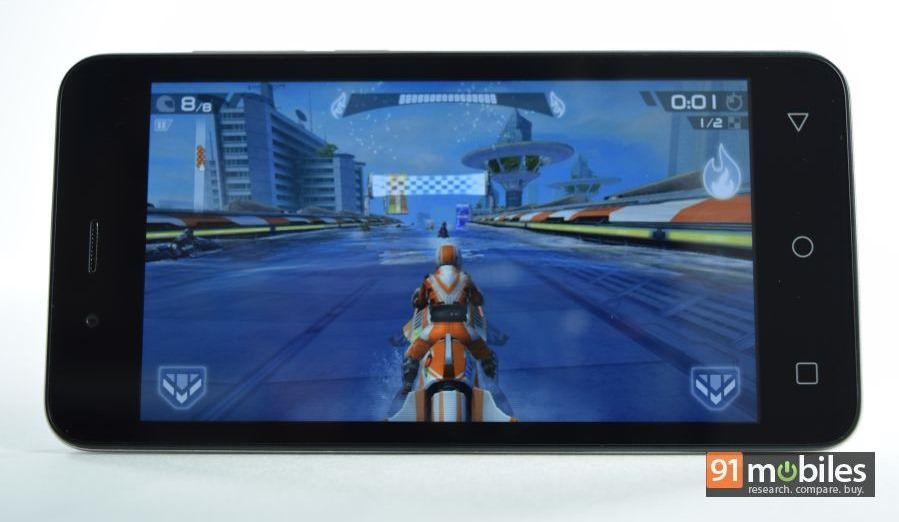 In the storage department, the device ships with 8GB of memory on board, which is quite good considering most phones under Rs 7,000 offer measly 4GB storage. After accounting for the OS, you’ll be able to access almost 4GB of memory for installing apps and saving multimedia files. In case that’s not able to serve your needs, then you add a microSD card of up to 32GB to extend the memory. The handset also supports USB OTG to allow connecting flash drives. 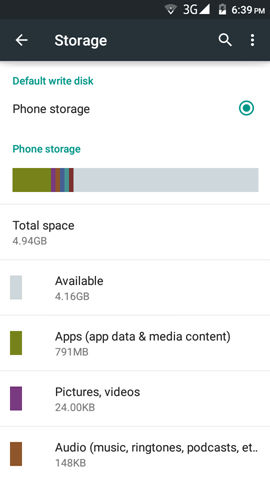 Fuelling the smartphone is a 2,000mAh non-removable Li-Po unit that manages to offer a good battery life. Even with the heavy usage of browsing, navigation and video calls, it easily lasted more than a day. In our battery drain test, the phone was able to run a 720p video for a period of close to 10 hours on loop.

It’s incredible to see how fast the tech world moves. Within a span of an year, you’ll find a ton of differences between Micromax’s offerings in the budget segment… between the Unite 2 and Canvas Spark, the latter offers better screen resolution, better camera, and double the storage, while priced cheaper at Rs 4,999 (compared to the Rs 6,999 price tag carried by the Unite 2). The Canvas Spark is also among the most affordable smartphones boasting Gorilla Glass 3 protection and the latest build of Android i.e. 5.0 Lollipop. 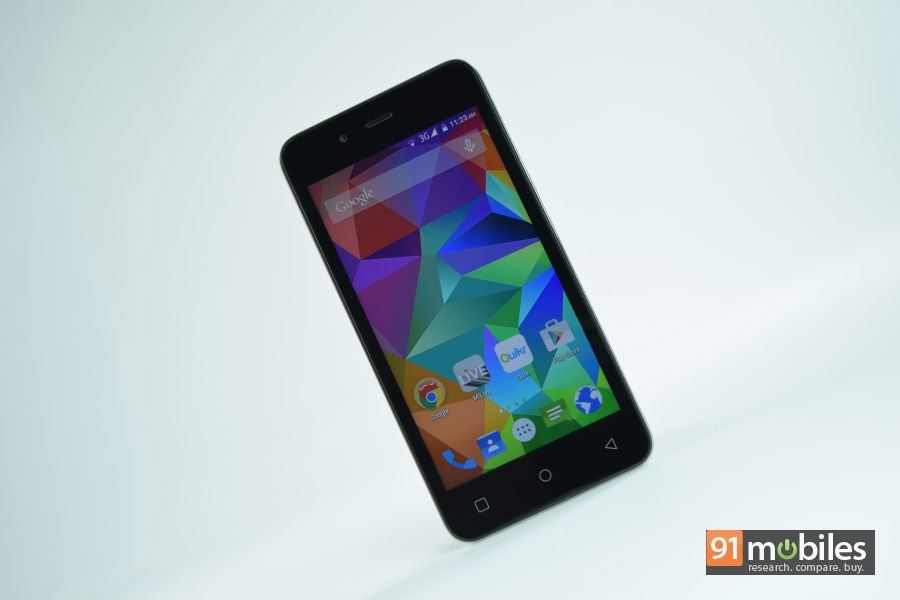 But everything isn’t a rosy affair with the Canvas Spark, especially its software. While you have the option to remove all the bloatware, there are some serious bugs with it. The device becomes unresponsive many a times for no apparent reason and as mentioned earlier, it also restarts automatically. However, we hope that these issues can be resolved via a software update.

Then, there’s the problem of flash sales, and a limited number of units go on sale every week on Snapdeal. So, if you don’t want the hassle of waiting or going through the cumbersome flash sales process, then you can look at other options in this segment, such as the Honor Bee (first impressions) or Infocus M2. However, they don’t ship with Android Lollipop out of the box and come with slightly smaller screen sizes as compared to the Canvas Spark.

To sum up, the Micromax Canvas Spark seems like a great offering in its segment, but its software kinks don’t make it compelling enough for us to recommend it wholeheartedly.