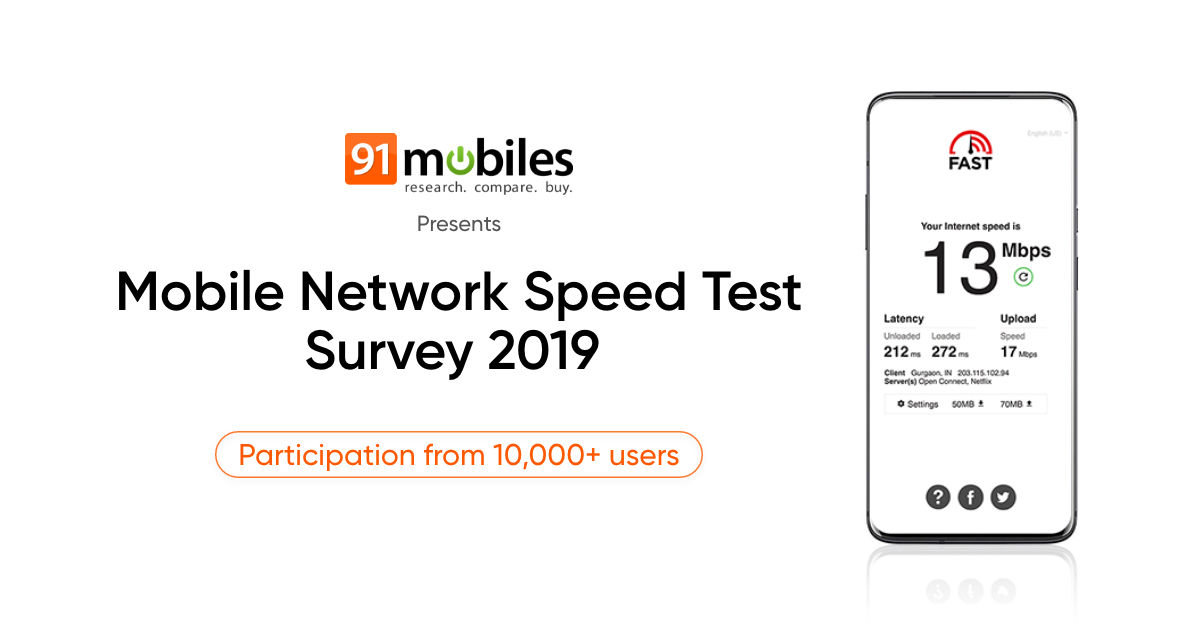 We live in an era where data is the new oil. Smartphones can’t really function without data, and for those who’re constantly on the go, and many others who don’t have access to broadband, mobile data is the fuel that drives their digital lives. From email / web browsing to instant messaging / social apps, online mobile gaming to streaming media, access to fast mobile data is a need as basic as food and water for many. Late last year, we set out to find the fastest mobile network in India, with help from real-world data sourced from our users.

The methodology for this was simple. We asked users to run a network speed test on their smartphones, by turning off Wi-Fi, switching to mobile data, and using their mobile browsers to open fast.com. This website allows one to test the download and upload speeds of data networks. Users were then asked to upload screenshots of the results via a Google form, and based on over 10,000 entries we received, we’re now ready to share the insights.

Not only have we managed to identify the fastest mobile network in India, we have data on which telecom operator is most popular overall, and have also split the figures by region, metros, and major Indian cities. Before we move on to the specifics, here’s the entire report for your reference.

The most popular mobile network in India

Jio has emerged as the most popular mobile network in the country, with 52 percent survey respondents using the telecom operator’s services. The telco has seen massive growth since its commercial launch in September 2016, and within a short span of time, found favour with many who find its services and data rates attractive. The VoLTE network also offers various content and streaming bundles as part of its services bouquet, which seem to have resonated with the users as well. 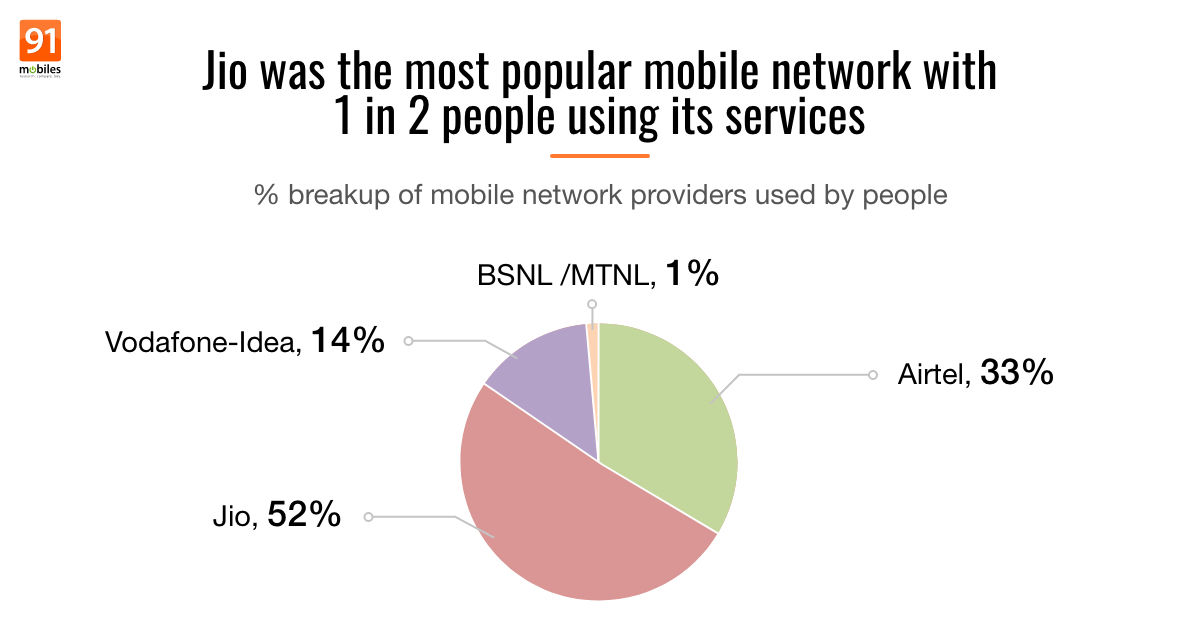 Airtel has grabbed second spot, with 33 percent survey respondents using its mobile services. Vodafone-Idea is third, with 14 percent, and BSNL/MTNL with 1 percent.

Download speeds form the most vital aspect of cellular data, defining how well you can use the various web-related functions of your smartphone. Staying connected over instant messaging, using social networks, emailing etc don’t need superfast download speeds, but for those who stream content (videos, music etc) and / or play online games on their phones, access to fast data download is crucial. 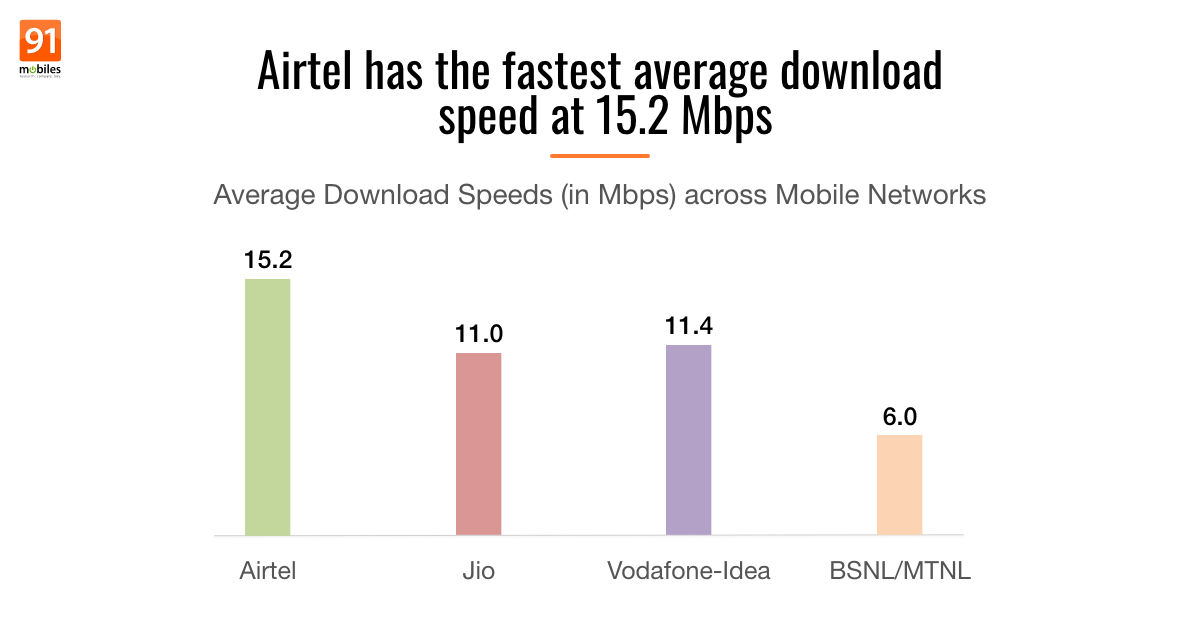 Coming to average mobile download speeds logged across the country, Airtel scored the highest by logging 15.2Mbps, with Vodafone-Idea coming in second with 11.4Mbps, followed closely by Jio which logged 11Mbps. BSNL/MTNL brings up the rear with 6.0Mbps. This means that Airtel could potentially be a better choice when it comes to tasks like streaming and mobile gaming on the go, as compared to other telecom providers. 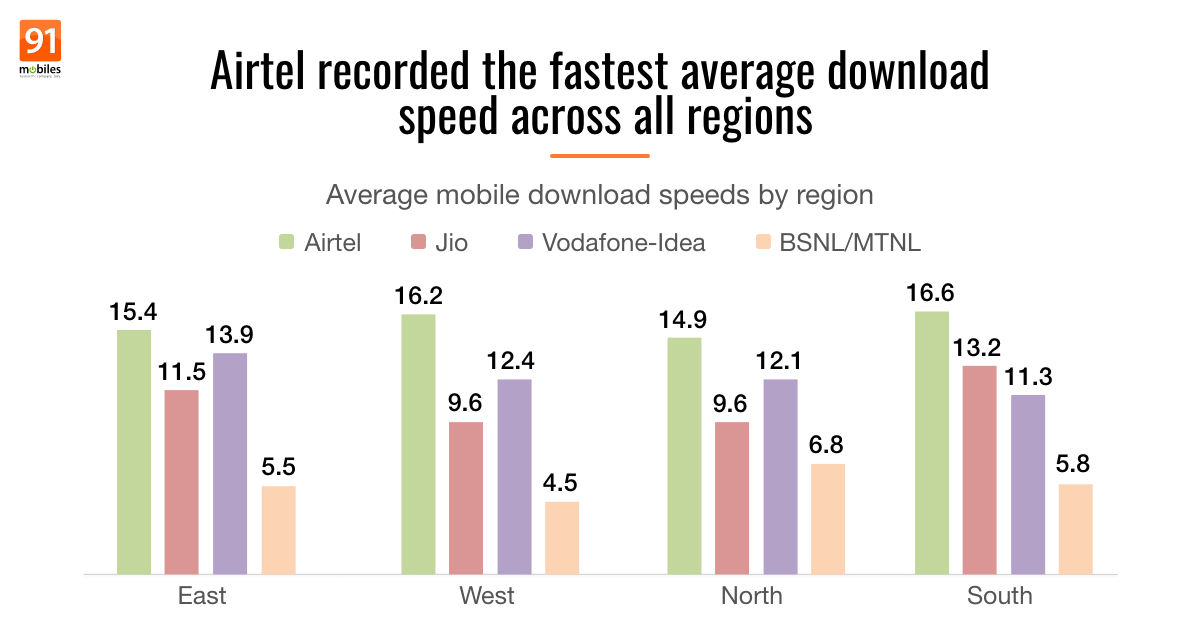 Splitting the numbers by region, we see that Airtel took top spot across all four regions of the country when it came to average download speeds. In fact, the rankings are the same in all four regions, with Airtel being the fastest, followed by Jio, Vodafone-Idea and BSNL/MTNL. The data speeds vary a bit across North, South, East and West though. So while Jio might be more popular, it’s Airtel that seems to offer better speeds across the country. 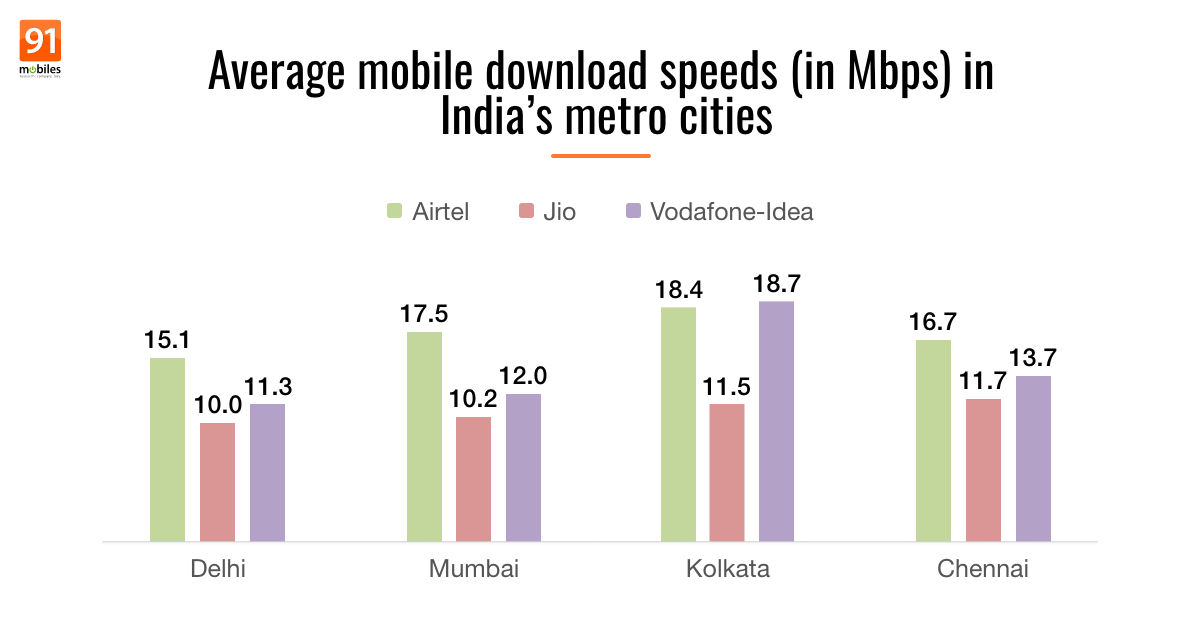 We broke the data down to look at the figures emerging from the Indian metro cities of New Delhi, Mumbai, Kolkata and Chennai. In New Delhi, Mumbai and Chennai, it’s Airtel that has taken the top spot in terms of average download speeds, followed by Vodafone-Idea at second spot and Jio at third. In Kolkata however, it’s Vodafone-Idea that emerged as the fastest, with Airtel following close behind, and Jio being third.

Next up, we look at the data speeds logged by users in the cities of Bengaluru, Pune, Hyderabad and Jaipur. This time, there’s a fair bit of variation visible.

Upload speeds would matter more for those who live stream from their devices or share heavy files (videos etc) with others, and this is where Vodafone-Idea seems to fare better as compared to others. 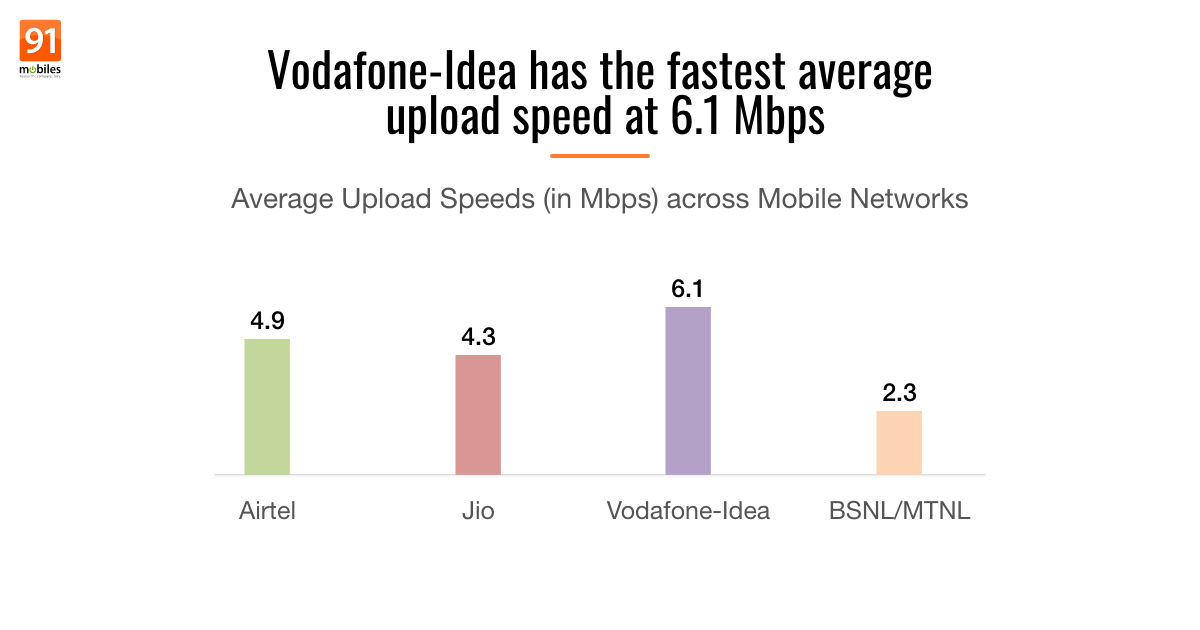 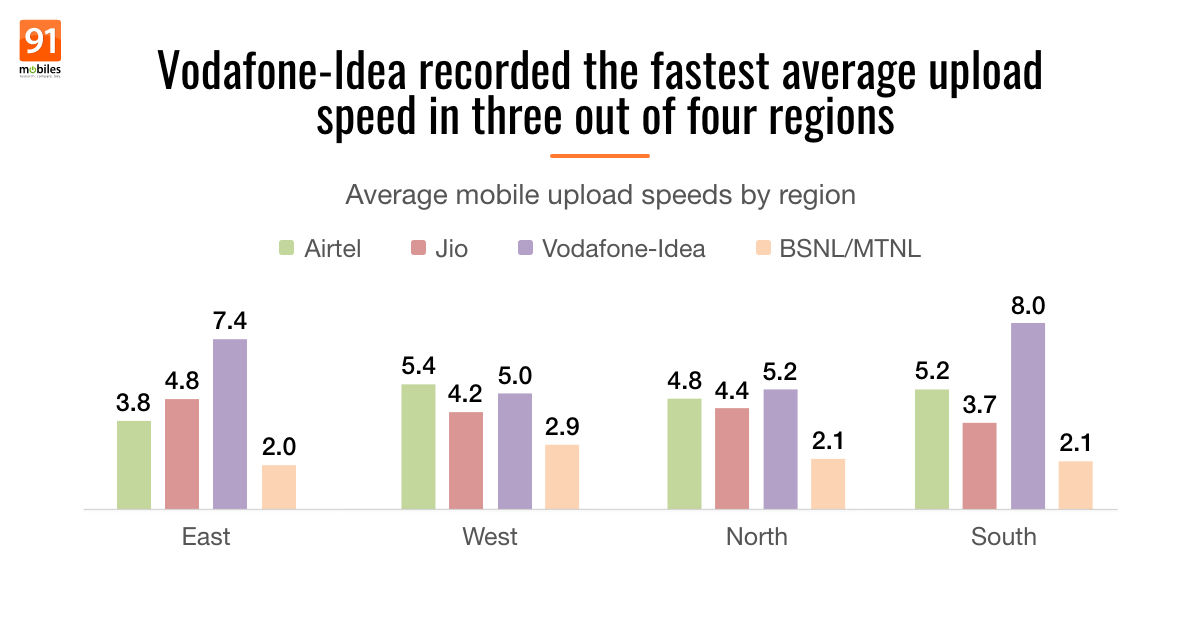 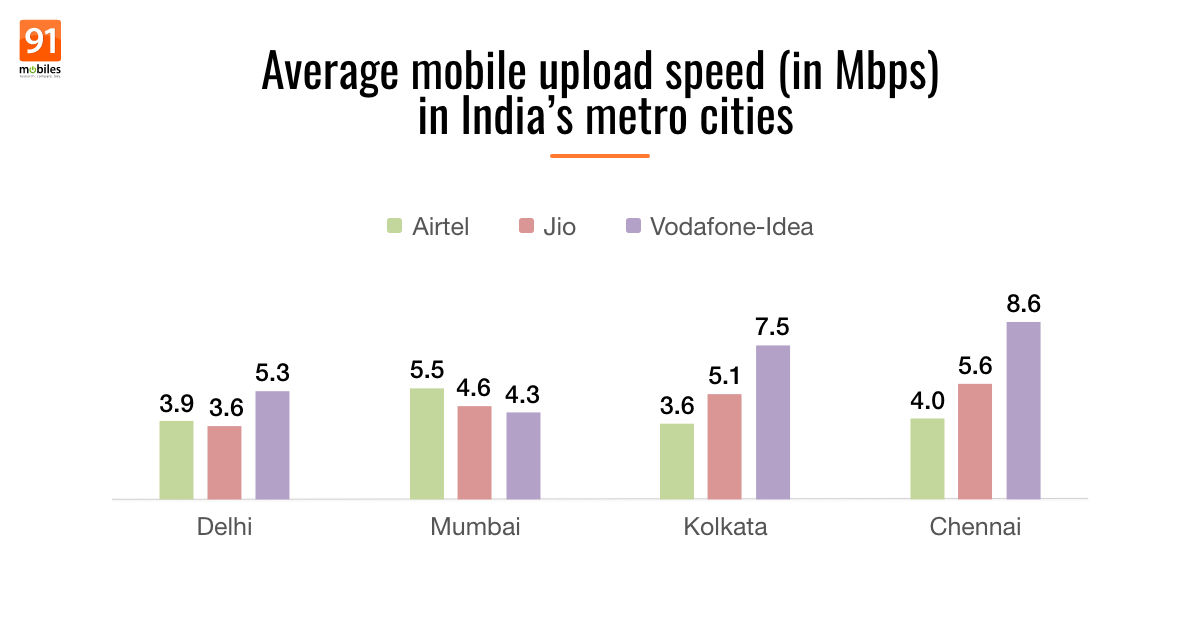 When it came to the fastest recorded upload speeds, Airtel logged the highest score of 92Mbps in Bengaluru, while Jio came in second by logging 57Mbps in Midnapore, West Bengal.

Here’s a quick recap of the results: