Motorola’s One Power (first impressions) is a unique smartphone in more ways than one, coming from a brand that has been constantly pushing out compelling smartphones in the affordable segment. It’s Motorola’s first handset in the country to utilise the Android One platform, and is also the first ever from the brand to feature a notch-bearing display. However, with its retail price of Rs 15,999, it’s been launched in an extremely competitive price segment. So does the Motorola One Power have what it takes to win the mid-budget segment back from Xiaomi’s offerings? Read our detailed review to get the answer. 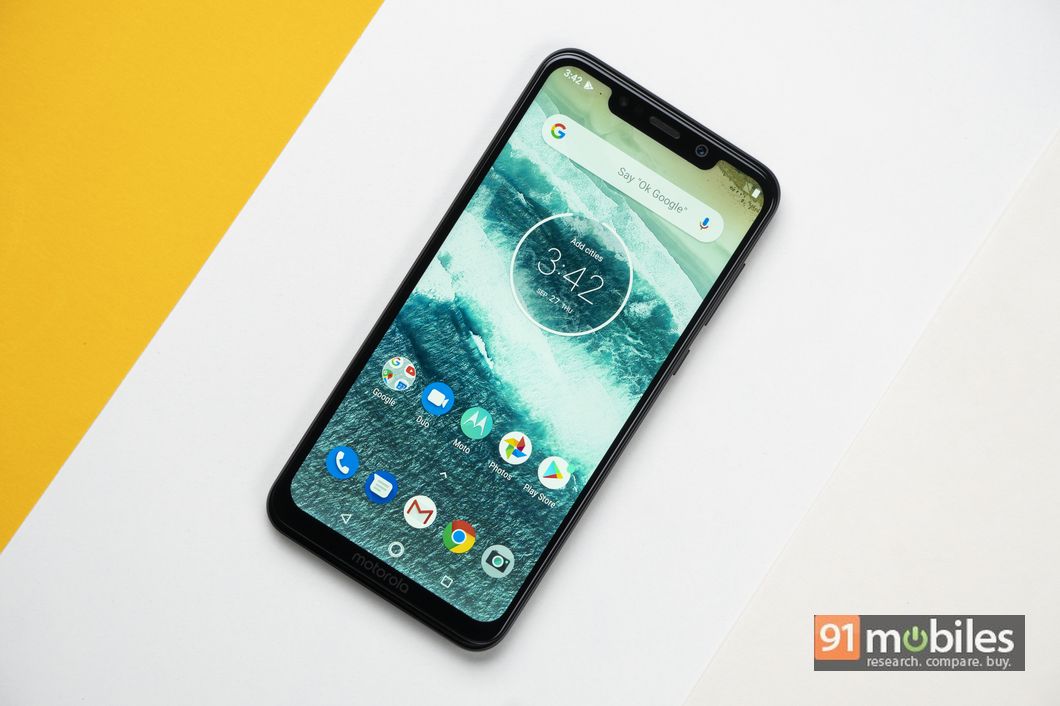 Although the glass-sandwich construction is quite a rage in the market right now, the Motorola One Power does not succumb to the pressure. The smartphone comes with a matte black finish that feels good in the hand. You also don’t get as many fingerprints or smudges on the back, as you would in the case of phones with a glass-back design. There’s a Moto dimple at the rear, which comes with an integrated fingerprint sensor. The dual-camera module, which juts out ever so slightly, is in a vertical orientation on the top-left side. 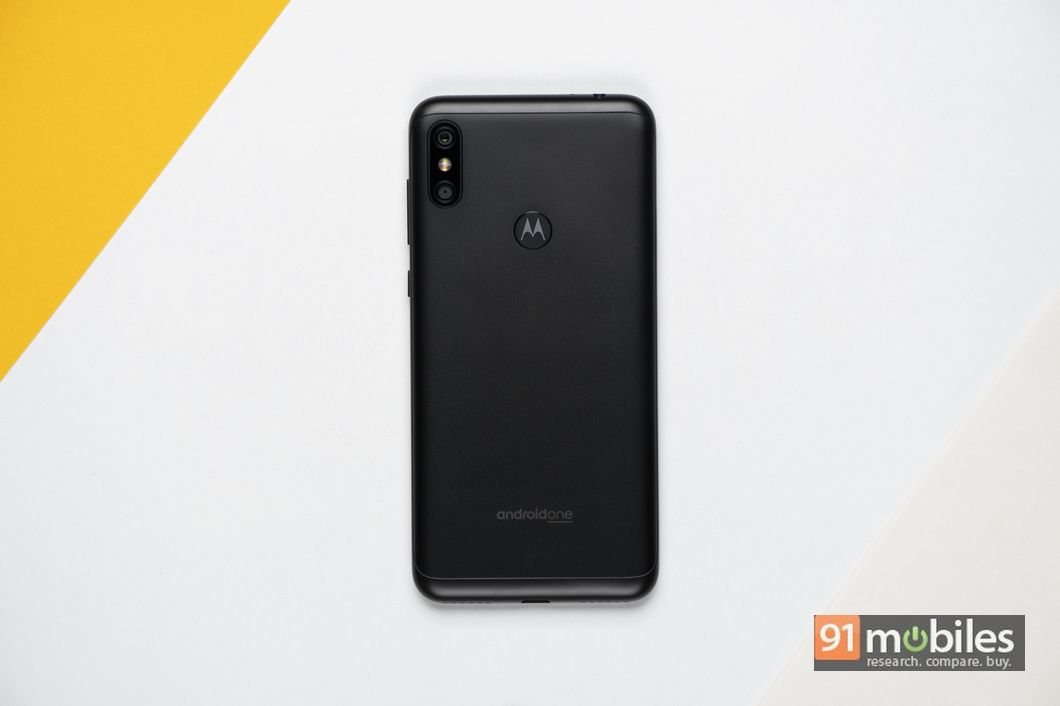 The clean design on the handset, with just Android One branding towards the lower end, is definitely appreciable. The volume rocker and the power buttons are both located on the right spine of the One Power and are easily accessible, even when using the phone with one hand. The USB type-C charging port is present at the bottom, next to the speaker. The 3.5mm audio interface is placed at the top of the handset. 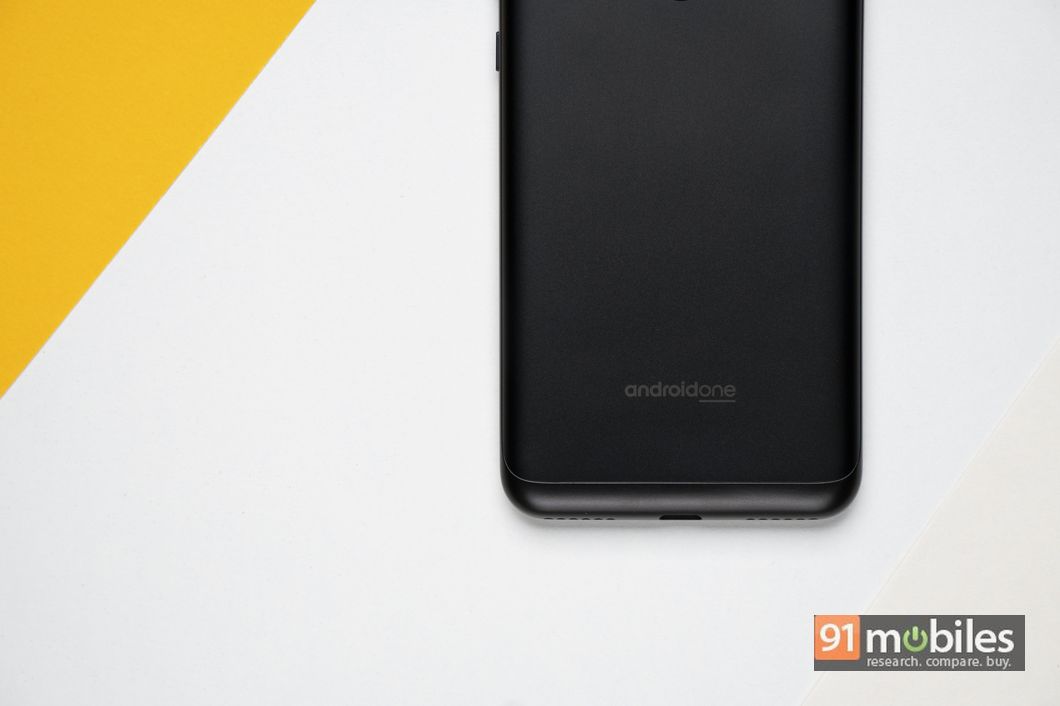 Although the Motorola One Power features an impressive design, there is one drawback for the handset. Tipping the scales at 205g, the device feels bulkier than most recent phones. While we don’t necessarily mind that, considering the phone ships with a beefy 5,000mAh battery, it’s worth noting that there are other smartphones with similarly-sized batteries which weigh less (the ASUS ZenFone Max Pro M1 being one of the examples). 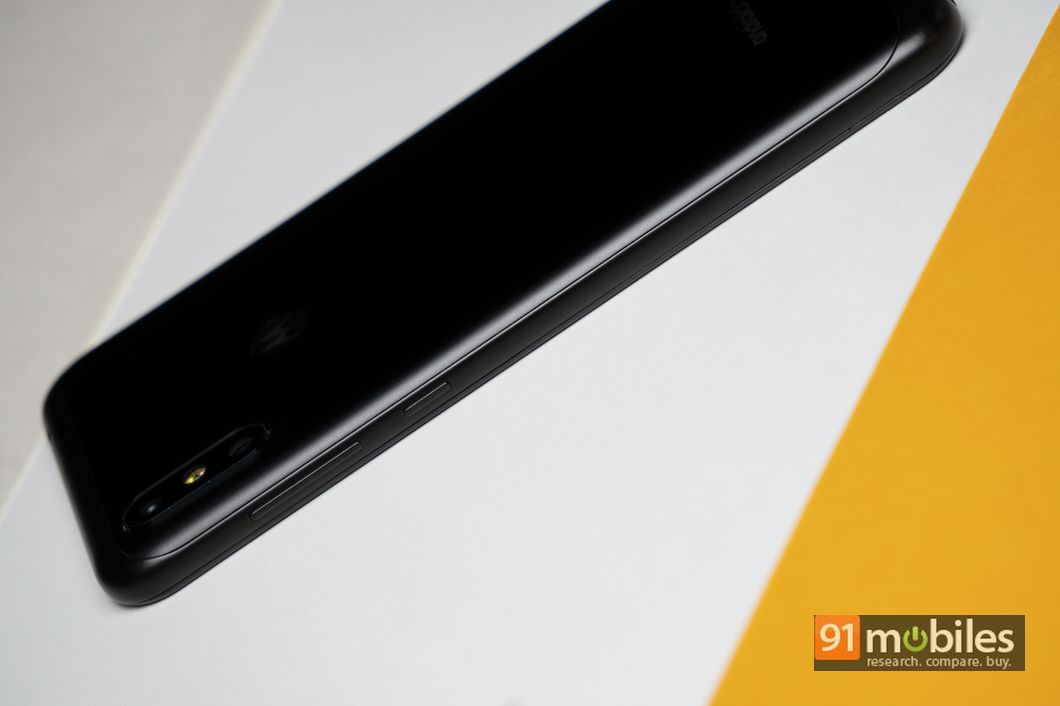 Moving to the display, the 6.2-inch FHD+ panel on the Motorola One Power ships with an 18.7:9 aspect ratio to accommodate the notch up top. While the company was late to board the bandwagon, the rounded edges of the screen and the cut-out are definitely a nice touch and offer an immersive experience. You get punchy and vibrant colour reproduction and the text appears to be crisp as well. The maximum brightness level is optimum for outdoor usage and viewing angles never pose any significant problem either. 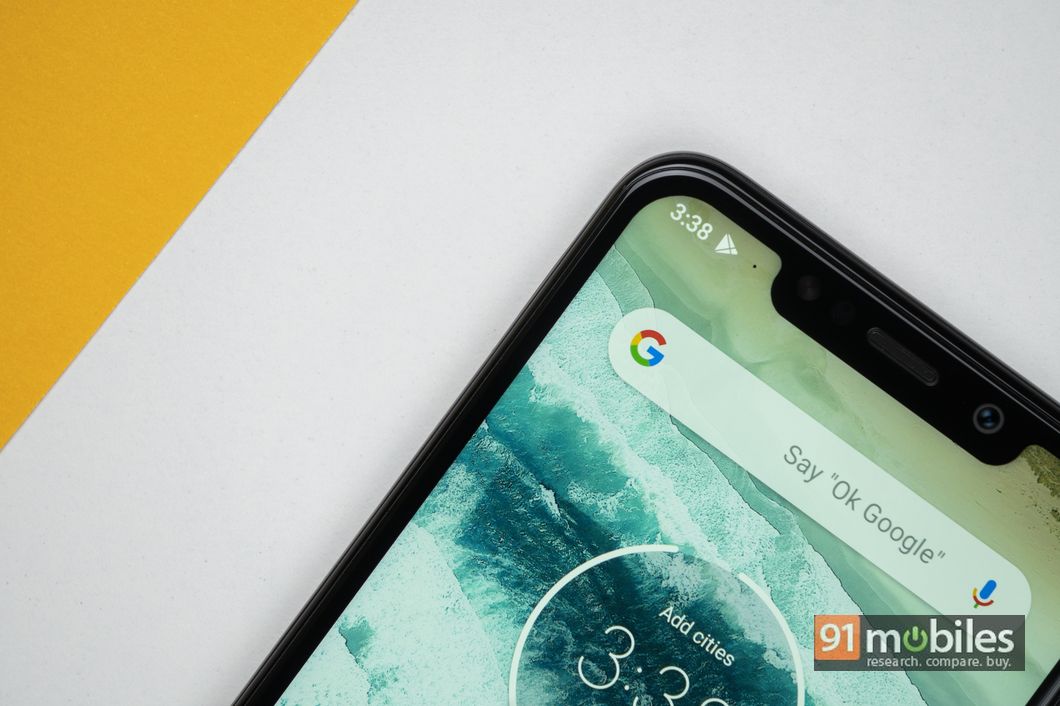 From the display settings, you can choose the colour temperature for the phone’s display. The Night Light feature, when enabled, shifts the display tone to a warmer side as the day draws to a close. Overall, if you don’t have a specific issue with the notch design, you will mostly be satisfied with the display offered on the Motorola One Power. Here’s a closer look at the phone.

Motorola One Power Design Gallery
1 of 8

As mentioned earlier, the Motorola One Power features a dual-camera module at the back. The setup consists of a 16MP shooter and a 5MP secondary sensor, with PDAF and LED flash support. For selfies, the smartphone sports a 16-megapixel snapper. Admittedly, the camera performance is not among the strongest points for the Moto One Power by any means. However, provided good lighting conditions, the phone manages to click some good shots. 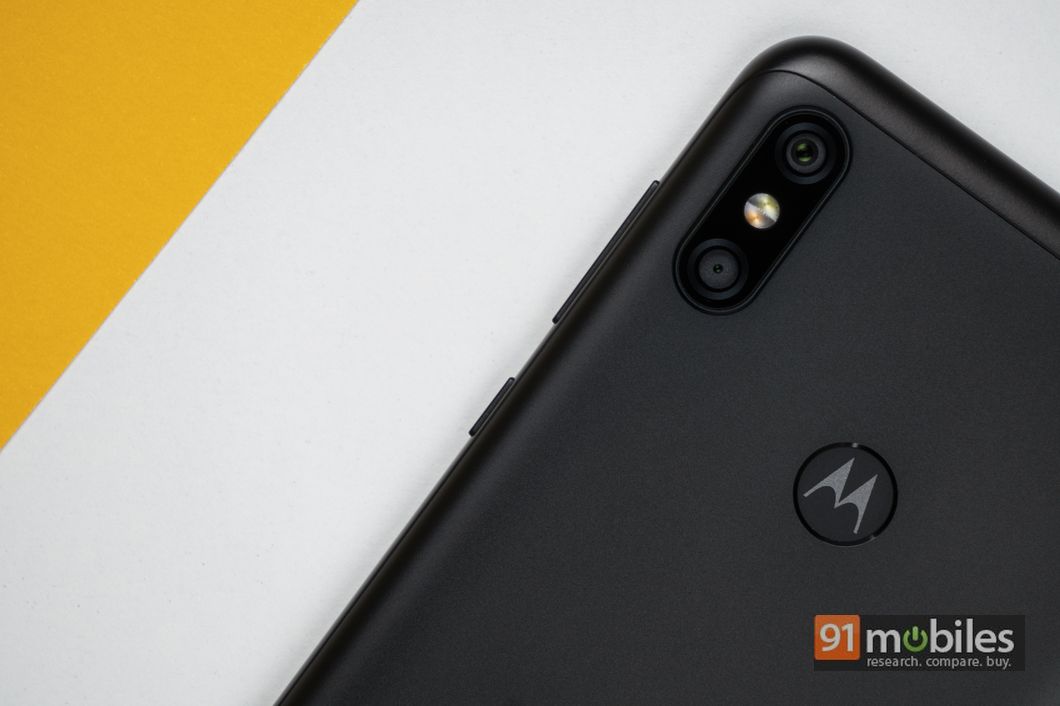 In the default camera app, you get the option to shoot in Photo, Portrait, and Expert modes. In the Expert mode, as you might expect, you get to tweak white balance and ISO levels. Notably, in portrait mode, the phone automatically shifts to a wider aspect ratio and there is no option to switch to other aspect ratios. There’s Google Lens integration in the camera app as well, which should not come as a surprise as we are talking about a phone with Android One branding.

Coming to the image quality, in daylight conditions, the One Power managed to capture details fairly well. However, the colour reproduction can’t be described as completely accurate as they appeared to be slightly oversaturated. If we talk about the dynamic range, the difference from the auto mode and HDR isn’t significant. Like most phones, low-light scenarios proved to be a tough nut to crack for Motorola’s offering. There’s a noticeable amount of grain and despite shifting focus, the handset struggled to tackle light sources well in dim environments. The One Power’s 5MP secondary sensor enables portrait mode, although there are occasional issues with the bokeh images as the phone blurs the edges of the subject (see the sample embedded below).

The Motorola One Power’s front camera clicks good selfies that offer a high level of details. In the video mode, you get the option to shoot 4K clips. However, the handset misses out on OIS and features EIS (electronic image stabilisation), which means that videos turn out to be slightly shaky. The quality of the videos was decent. Have a look at the camera samples of the Motorola One Power to get an idea of the phone’s imaging capabilities.

Motorola One Power Camera Samples
1 of 8

One of the biggest advantages that you get with any Android One handset is that you are provided with a near-stock iteration of Android. The Motorola One Power runs Android 8.1 Oreo out of the box and there is no bloatware to deteriorate the user experience. Apart from the usual set of Google apps, you get the Moto app to get access to some of the company’s proprietary features like Moto Actions and Moto Display. 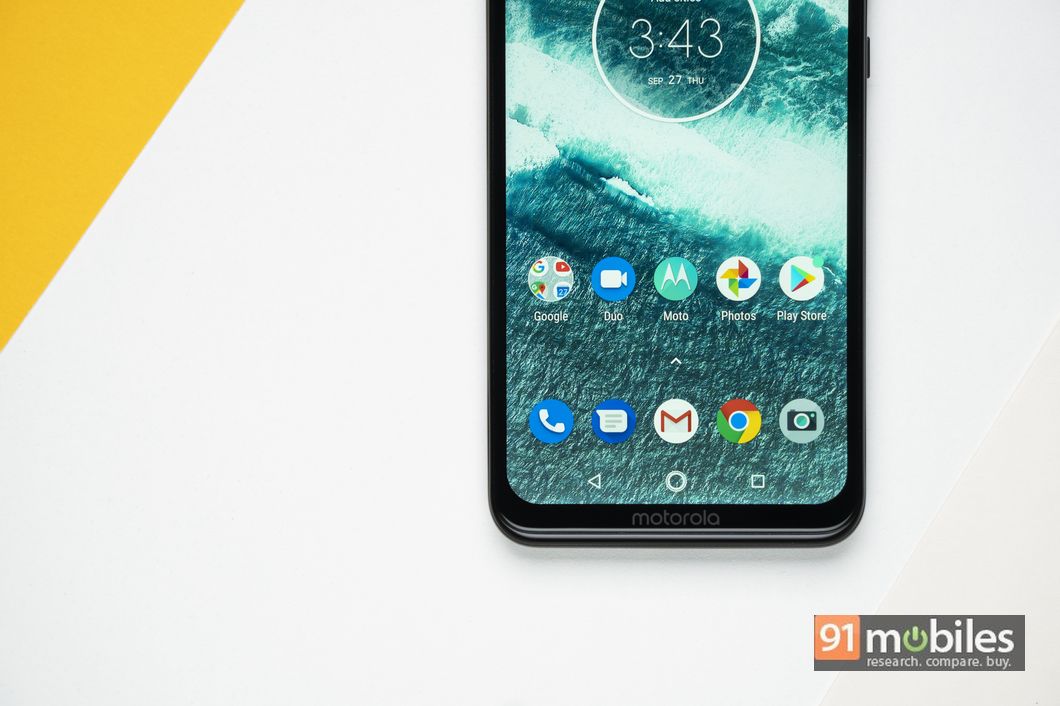 For those who are unaware, the Moto Actions feature allows users to get access to different phone functionality by performing simple gestures. With Moto Display, you get notifications to fade in and out when the screen is off. In an interesting addition, the Moto Help app allows users to perform a hardware test on the phone to check if there is any particular issue with the touchscreen, display, flash, and audio connection, among others. There is a rather redundant Duo video-calling app on the phone as well, which can be disabled, just like every other preinstalled app on the phone.

The Motorola One Power is powered by the Snapdragon 636 SoC, which is coupled with 4GB of RAM. The handset ships with 64GB of built-in storage, which is expandable up to 256GB via a microSD card. During the course of our review, we didn’t face any issues while navigation. The UI animations were buttery smooth most of the times and the phone handled the multitasking with ease. 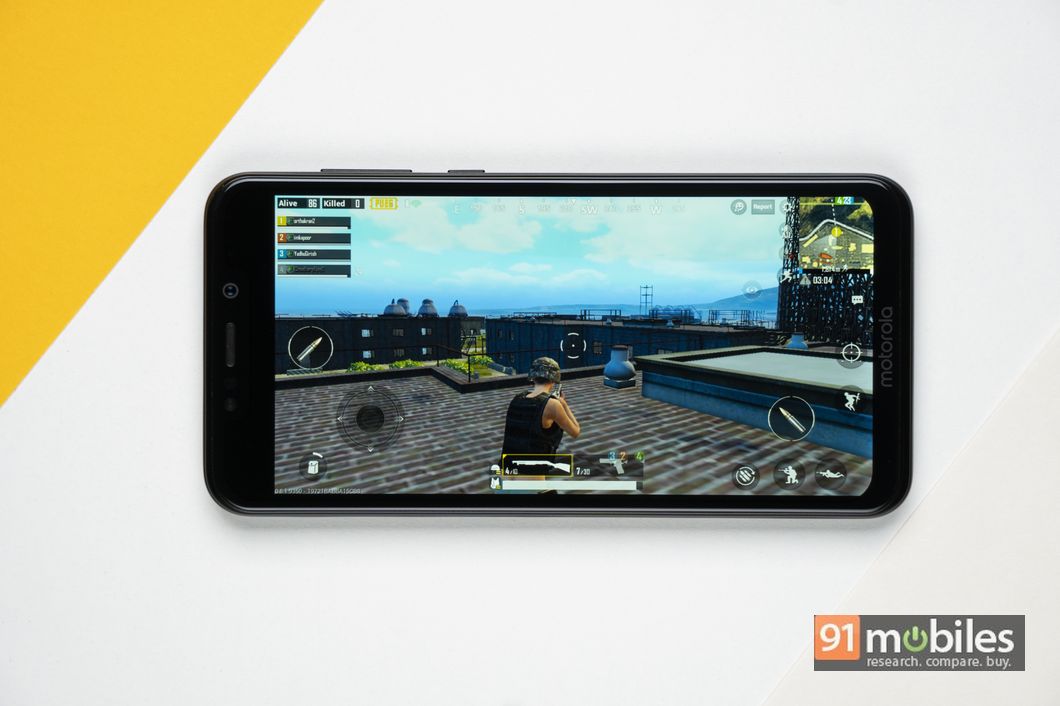 In order to use the split-screen feature, you just need to head to Recents and just drag the app’s window to the top of the screen. Strangely though, while playing PUBG, the game recommended low graphics settings to us, which was not the case with ASUS Zenfone Max Pro M1, which also rocked the same processor. In terms of playability however, the hardware was able to ensure a lag-free experience. Other games such as Ashphalt 8: Airborne did not present any major issues for the One Power either.

The loudspeaker on the Motorola smartphone is capable of reaching high volumes, which makes watching movies or playing games without earphones a fun experience.

A very good phone can turn out to be a huge letdown if it’s unable to last a day. Motorola has made sure that the One Power doesn’t fall in this category. The handset ships with a massive 5,000mAh battery capacity. In our HD video loop test, the smartphone managed to last around 16 hours. 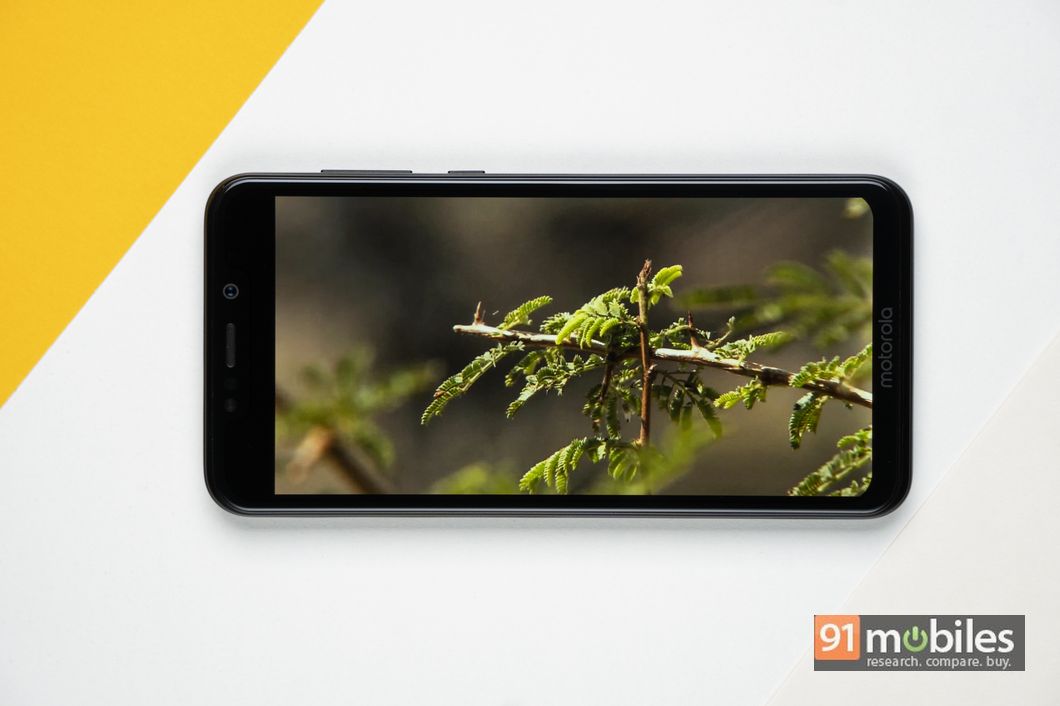 Truth be told, we expected the Motorola One Power to last much longer as in our regular usage, the handset managed to last a full day of use with ease. Considering we are power users, this is an admirable feat for any smartphone. Thanks to the support for Turbo Charging, the handset can be charged from 5 percent to 100 percent in around 2 hours and 25 minutes, which is quite impressive. If you travel a lot, One Power’s beefy cell can turn out to be a lifesaver for you.

The Motorola One Power is one of the easy-to-recommend smartphones in the mid-range. The handset offers a near-stock Android experience, comes with an elegant design, packs a massive battery, and offers smooth performance. However, the phone feels relatively heavy in the hand and camera quality isn’t its strongest point. 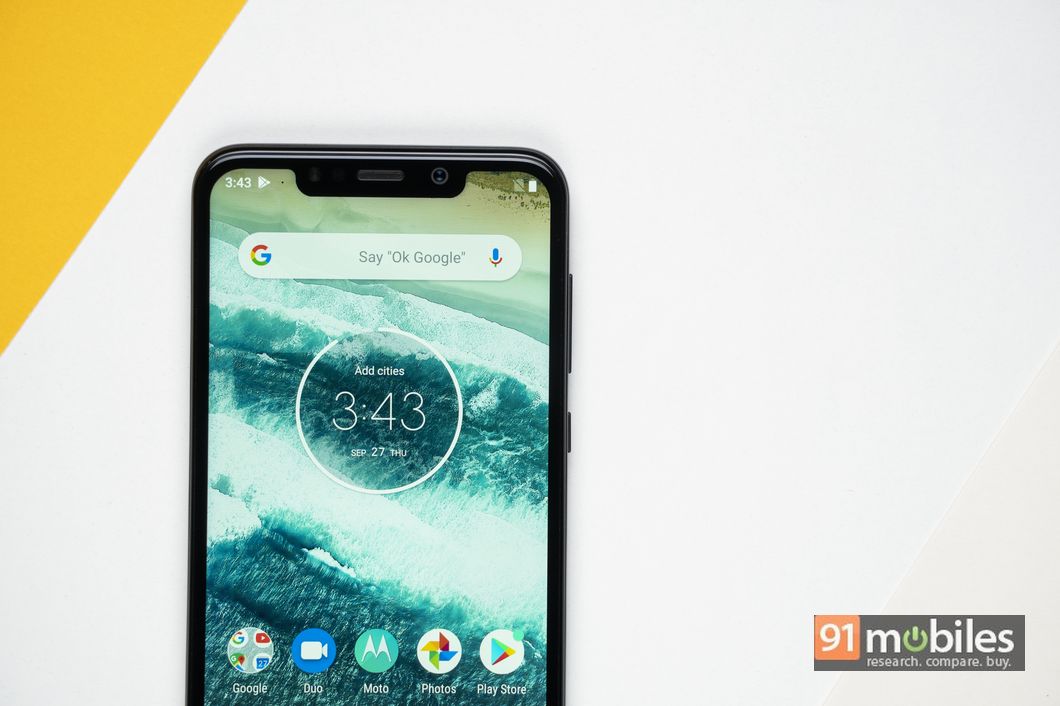 The handset will face direct competition from the likes of the ASUS Zenfone Max Pro M1 6GB (review), Xiaomi Redmi Note 5 Pro 6GB RAM (review), Xiaomi Mi A2 (review), and the newly-launched Realme 2 Pro (review). Both the ASUS handset and Redmi Note 5 Pro come powered by the Snapdragon 636 SoC and offer strong batteries along with higher RAM capacity, though miss out on the Android One support. Xiaomi’s Mi A2 and Realme 2 Pro on the other hand, offer more powerful SD660 chipset, with the former also being an Android One handset. However, the Mi A2 ships with smaller 3,000mAh cell and is priced Rs 1,000 higher. The Realme 2 Pro is a powerful contender considering its attractive starting price of Rs 13,990.

Considering there are so many good handsets in this price range, it is truly a great time to be a consumer. All said and done, while Motorola’s One Power isn’t the only mid-ranger worthy of your attention, it should be on the top of your shortlist if you are looking for a smartphone that can stay away from the charger for long and want frequent Android updates.