“Here’s our comprehensive review of Nokia’s latest midranger – the Nokia 6.1 Plus”

It’s been two years since Nokia got back into the reckoning and in that time, the company has launched numerous Android smartphones with compelling specs and features. It goes without saying that the company’s factories are working at full capacity, as the brand recently unveiled yet another smartphone to compete in the budget segment. Dubbed the Nokia 6.1 Plus, the smartphone was initially launched in China as the Nokia X6 and it is the first device from the company’s stables to ship with a display notch. 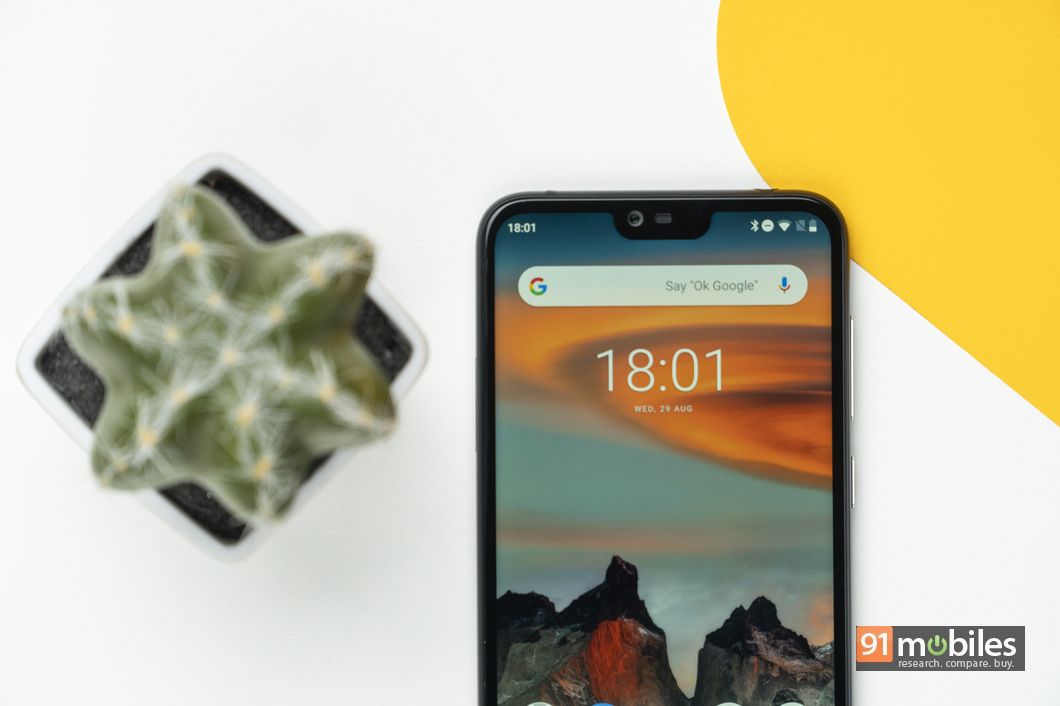 Moreover, you’ll also get the usual array of a glass-back design, the latest Android software and dual-cameras with the smartphone. But, is that enough to fend off the competition from the likes of Xiaomi’s Redmi Note 5 Pro (review) and ASUS Zenfone Max Pro M1 (review)? Stay with me to find out.

They say looks are subjective, but you’ll be hard-pressed to find someone who doesn’t fancy the design of the Nokia 6.1 Plus. Unlike its predecessors which employed metal in their construction, the Nokia 6.1 Plus ships with glass on both the front as well as the back, held together by a metal trim. Although it’s not uncommon to find glass-back designs in the affordable segment anymore, the build quality on the Nokia 6.1 Plus is impeccable and it blows the competition out of the water. The 2.5D curved glass merges seamlessly into the smartphone’s frame, the chamfered metal trim feels exquisite to the touch and despite the glass surface encompassing almost 93 percent of the handset’s entire body, the Nokia 6.1 Plus doesn’t come across as delicate. This kind of confidence can only be instilled in the buyers by Nokia. 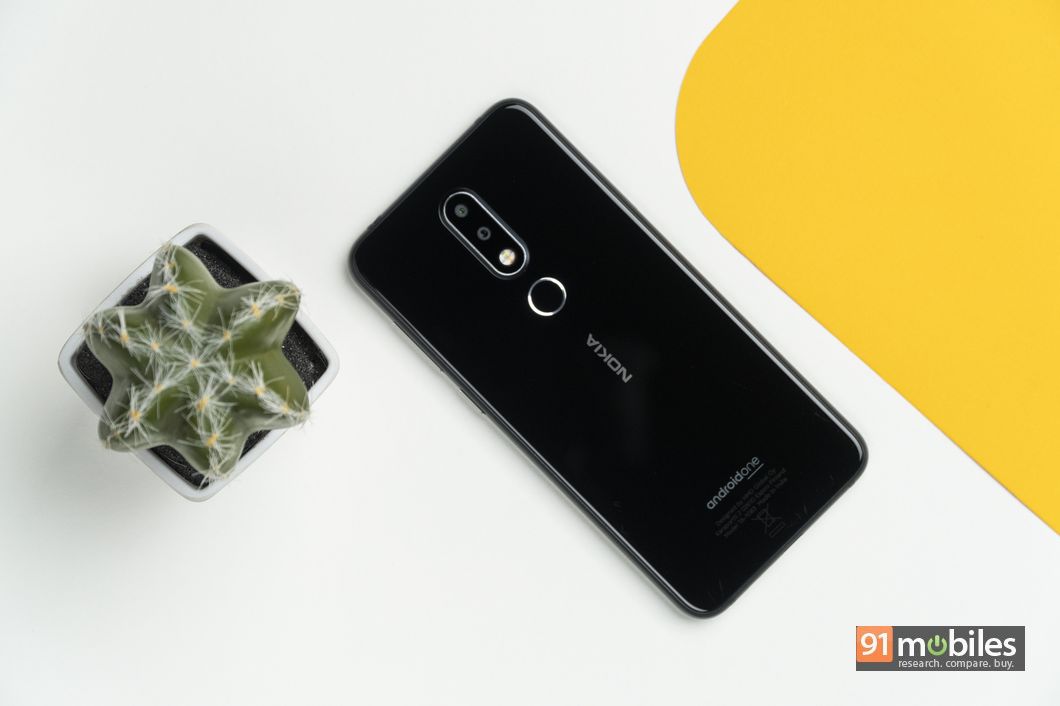 Moreover, to ensure that the 6.1 Plus’ design doesn’t feel bland, Nokia has added chrome trims around the handset’s camera module and physical buttons which further enhance the smartphone’s aesthetics. Quite honestly, the Nokia 6.1 Plus looks and feels a lot like Apple’s high-end iPhone X, which says a lot about the smartphone’s excellent design.

What’s more, similar to Apple’s offering, the Nokia 6.1 Plus feels extremely compact in the hand, despite its massive 5.8-inch display. This is in a large part due to the smartphone’s sleek bezels, which make it so that the display takes up over 81 percent of the smartphone’s frame. 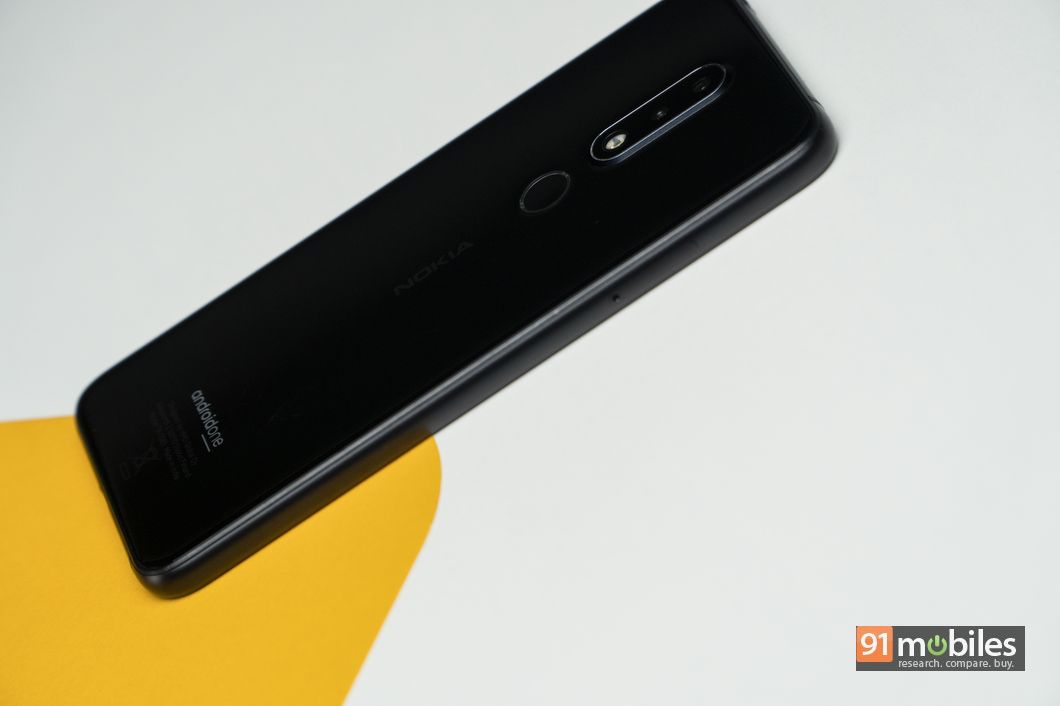 Unfortunately, as is the case with most glass-back devices, the Nokia 6.1 Plus smudges really easily and is quite slippery too. I got the black colour variant of the smartphone to review and it is a nightmare to keep fingerprints from sticking to the back of the device. Moreover, don’t let the presence of a layer of Corning’s Gorilla Glass V3 on the smartphone fool you – it still picks up scratches and dings like any other glass-back device out there. Therefore, you’d be better off slapping a case on the smartphone if you want to keep the smartphone in a pristine condition. 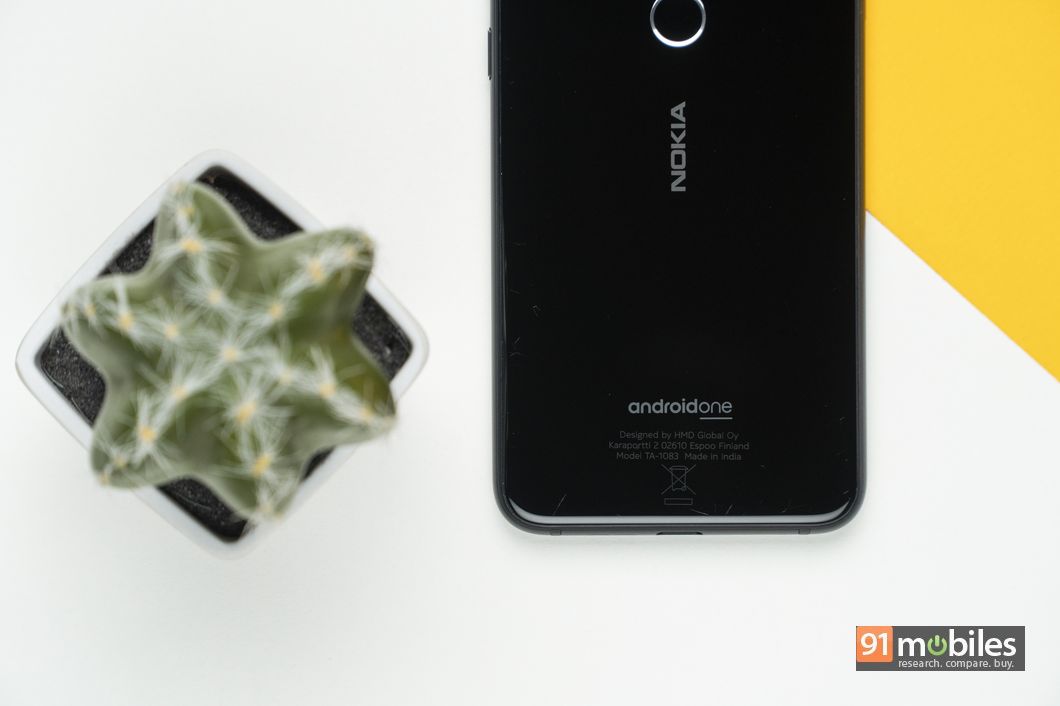 I would also like to point out that the fingerprint sensor on the smartphone has been positioned a bit too low for my liking. The sensor sits below the smartphone’s dual-camera setup and its placement takes a while to get used to. In fact, I spent the first few days tapping at the smartphone’s camera module and wondering why isn’t the device getting unlocked. But, once you get used to the sensor’s placement, you’ll find that it works quite well – fingerprints are registered in the blink of an eye and you’ll be inside your home screen in under a second. Also, the Nokia 6.1 Plus ships with a headphone socket, which is being omitted from select affordable smartphones nowadays. 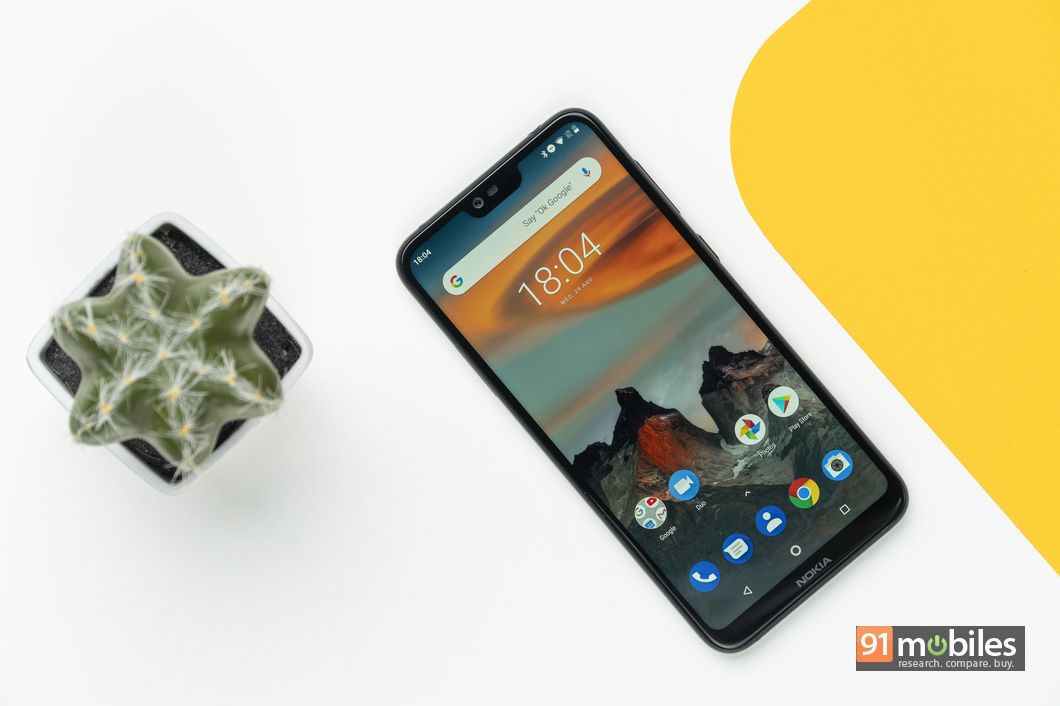 As I mentioned previously, the Nokia 6.1 Plus ships with a 5.8-inch display with a cutout at the centre to make room for the secondary camera and the earpiece. Now, I do not advocate the use of a notch unless it’s absolutely needed, as was the case with the iPhone X. However, the notch on the Nokia 6.1 Plus is considerably smaller than what you would get with other devices. Moreover, if you dislike the notch all that much, then you can disable it from within the settings. I feel that Nokia is pandering to both, the notch lovers and haters alike, which is a smart move to sell more phones. As far as the display is concerned, the panel makes use of IPS LCD technology and bears FHD+ resolution. Unsurprisingly, the text feels razor sharp on the smartphone’s display and the colours, though not as vibrant as exhibited by an AMOLED panel, feel tasteful to the eyes too. The viewing angles are really good, so you’ll need to be wary of hiding sensitive information whilst commuting in a metro from nosy people. Unfortunately, the display doesn’t get too bright so you might have to squint your eyes under direct sunlight to see the content being displayed.

If I could end my review here, I would’ve given the smartphone a big ol’ thumbs up. But, there are some other things you should know before pulling the trigger on your purchase.

Take it from someone who reviews smartphone on a day-to-day basis – you can get a really good smartphone with capable cameras by spending just south of Rs 20K. Be it the Xiaomi Mi A2 or the recently unveiled POCO F1, there are options galore for aspiring photographers to get a good smartphone with decent cameras without burning a hole in their wallets. Can then, the Nokia 6.1 Plus join the ranks of the elites I mentioned previously? Well, before I answer that, let’s talk about the smartphone’s camera specs. 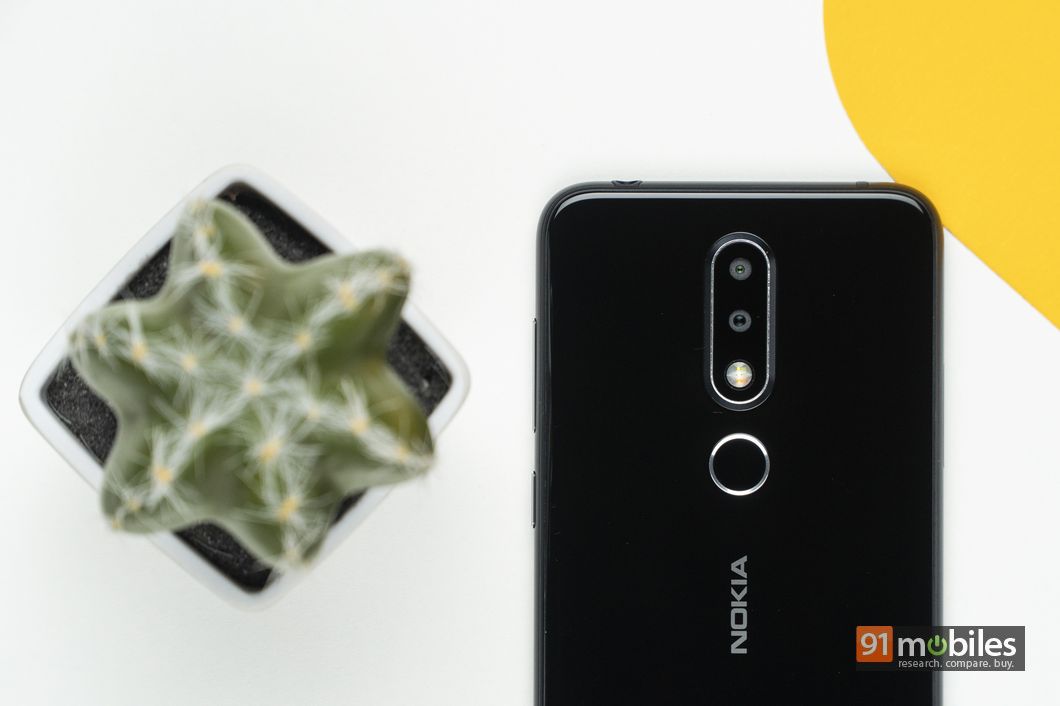 The Nokia 6.1 Plus comes equipped with a pair of 16MP and 5MP shooters at the back with f/2.0 and f/2.4 apertures respectively. For selfies, you’ll be smiling into a 16MP shooter, with f/2.4 aperture.

Coming to the performance of the rear cameras, the Nokia 6.1 Plus will often test your patience as its primary shooters take a while to latch on to the subject. However, your patience will be rewarded fruitfully once the smartphone does get the subject in focus, provided you’re shooting under ideal lighting scenarios. By that, I mean that you’ll want to be outdoors on a bright sunny day with the sun behind you, casting natural light on to your subject.

The shots I took with the smartphone during daytime were brilliant – the macros had plenty of details, the landscapes looked straight out of a movie and the colours felt natural. The smartphone’s built-in HDR mode did its job well too and boosted the colours and the details in the highlights and the shadows to make a scene feel more pleasing to the eyes. That said, the smartphone’s rear cameras struggle to process the colour ‘red’, which is evident when you try to click close-ups of flowers. Shots taken in portrait mode looked nice, however, the blur effect along the borders of the subject wasn’t as consistent as I’d liked it to be. Unsurprisingly, the cameras struggle to lock down on the subject at night, and even when they do, the quality of the image will rarely ever meet your expectations. 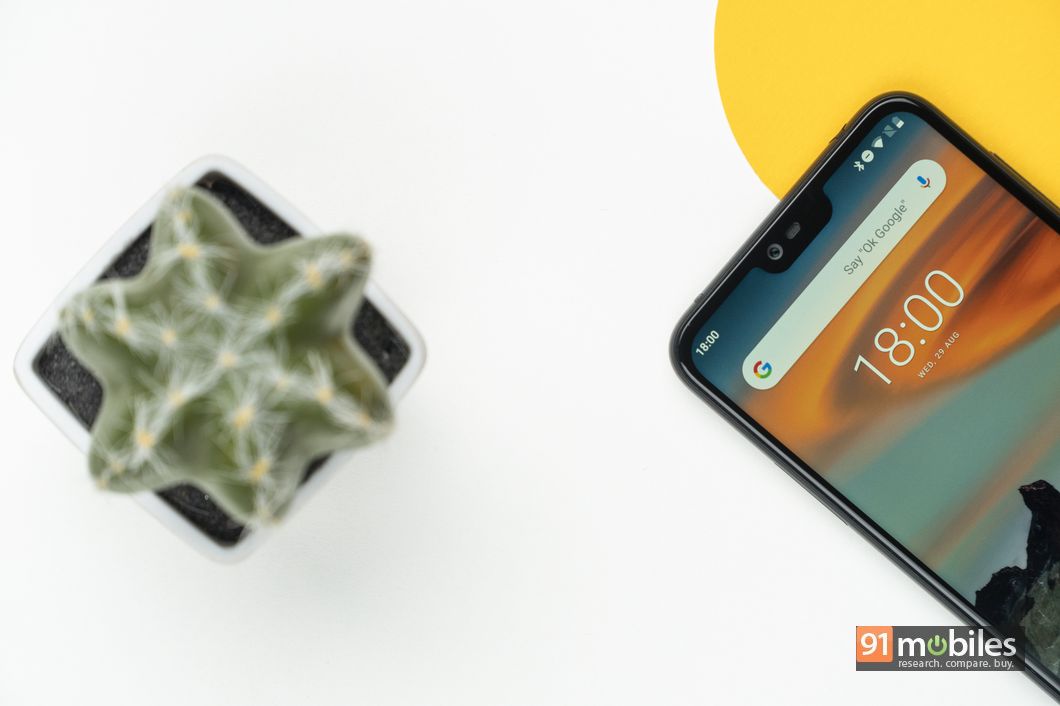 As for selfies, I managed to click some good-looking self-portraits with ample details in a well-lit environment. Moreover, if you’re not a fan of the pseudo beautification done by most Chinese smartphones, then you’ll love the natural-looking selfies from the Nokia 6.1 Plus. Unfortunately, since the smartphone doesn’t ship with a dedicated LED flash module for the front camera, the quality of selfies taken at night takes a minor dip.

For its asking price, the Nokia 6.1 Plus will go head-to-head with Xiaomi’s recently launched Mi A2 (review). Now, from a performance standpoint, the Mi A2 packs in more powerful hardware but, having used both the smartphones intensively, I can confidently say that the Nokia 6.1 Plus is no slouch when it comes to tackling everyday tasks. 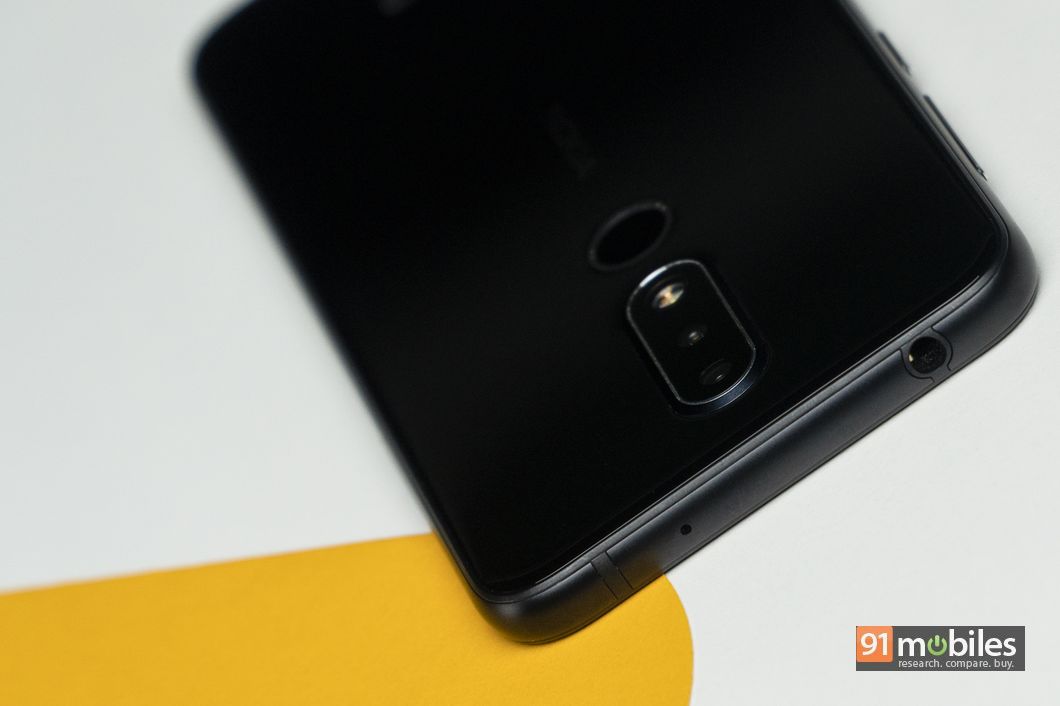 Underneath its glass-chassis, the Nokia 6.1 Plus is driven by an octa-core Snapdragon 636 processor which works alongside 4GB of RAM and 64GB of built-in storage. However, unlike the Mi A2, the Nokia 6.1 Plus does offer you the choice between using two SIMs or expanding the built-in memory up to 400GB by popping in a microSD card. 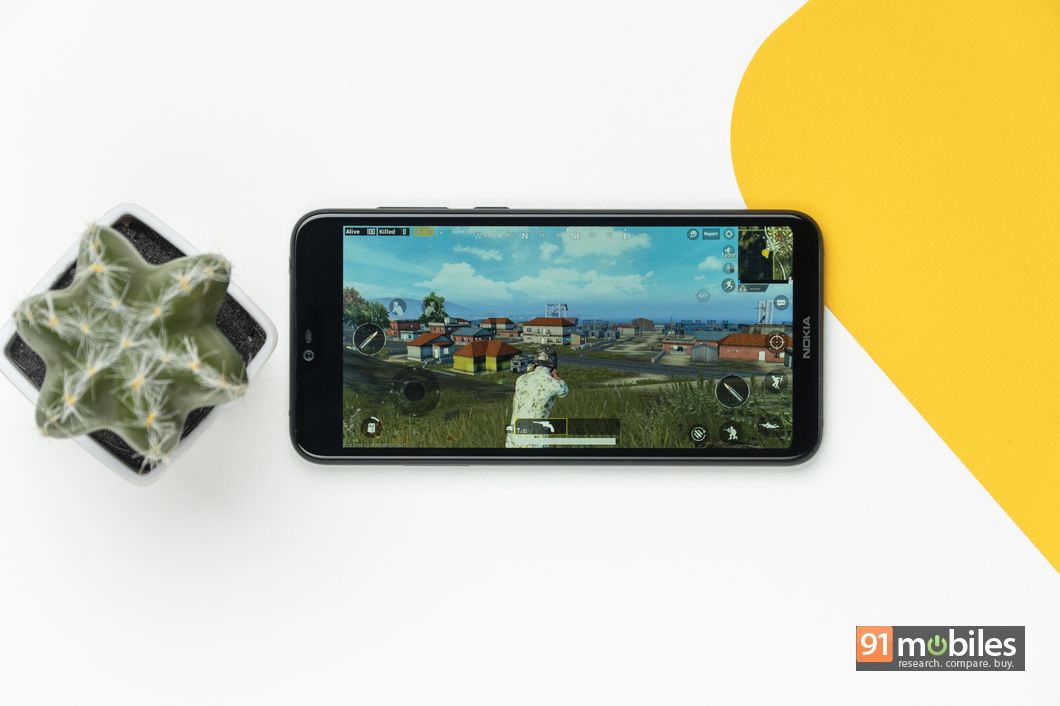 In terms of performance, the Nokia 6.1 Plus managed to keep pace with my intensive usage comfortably. Navigating through the system UI was a breeze, multitasking was as smooth as butter and despite having a dozen apps open in the background, the smartphone didn’t slow down to catch its breath. That said, if you’re an avid gamer, then you will find faults with the smartphone’s processor.

As an example, PUBG automatically defaults the graphics settings to low, which drops the draw distance, making it difficult to spot enemies from afar. On the other hand, buyers investing in the similarly-priced Xiaomi Mi A2 will be able to enjoy the title at medium graphics settings comfortably. Similarly, other demanding titles like Asphalt 9 and Unkilled were a bit choppy too when I was playing them with the graphics setting set to max.

On the flip side, the software onboard the Nokia 6.1 Plus is a joy to use. The smartphone runs Android Oreo from the get go, but since it is an Android One device, you will get the latest Android Pie update down the line for sure. Now, I have a slight bias towards smartphones which ship with stock Android which made using the Nokia 6.1 Plus that more fun for me. I didn’t have to worry about unnecessary bloatware eating up my device’s storage and there were no irrelevant notifications clogging up my status bar, asking me to sign in to a third-party app store or account. All in all, the software on the Nokia 6.1 Plus is clean and functional – what more could anyone ask for?

Nokia phones have for long been hailed for their incredible battery life which could last users for days on end. Unfortunately, the same cannot be said for the Nokia 6.1 Plus’ 3,060mAh battery, which required me to plug in the smartphone twice a day. To give you some perspective, I managed to get around four hours of screen on time with the device, with my usage including playing some casual games, browsing through my social media feeds, messaging and listening to music. Moreover, you should know that the smartphone lasted 11 hours on our 91mobiles battery test, which is average at best.

The Nokia 6.1 Plus certainly has a lot going for it. For its asking price of Rs 16,999, the handset features a beautiful design, is a decent performer, comes with expandable storage and features a capable selfie-camera. However, in the cut-throat smartphone industry, there are a plethora of other options which could give you more bang for your buck. The Xiaomi Mi A2 comes instantly to mind, which offers better performance and superior cameras as compared to Nokia’s offering. 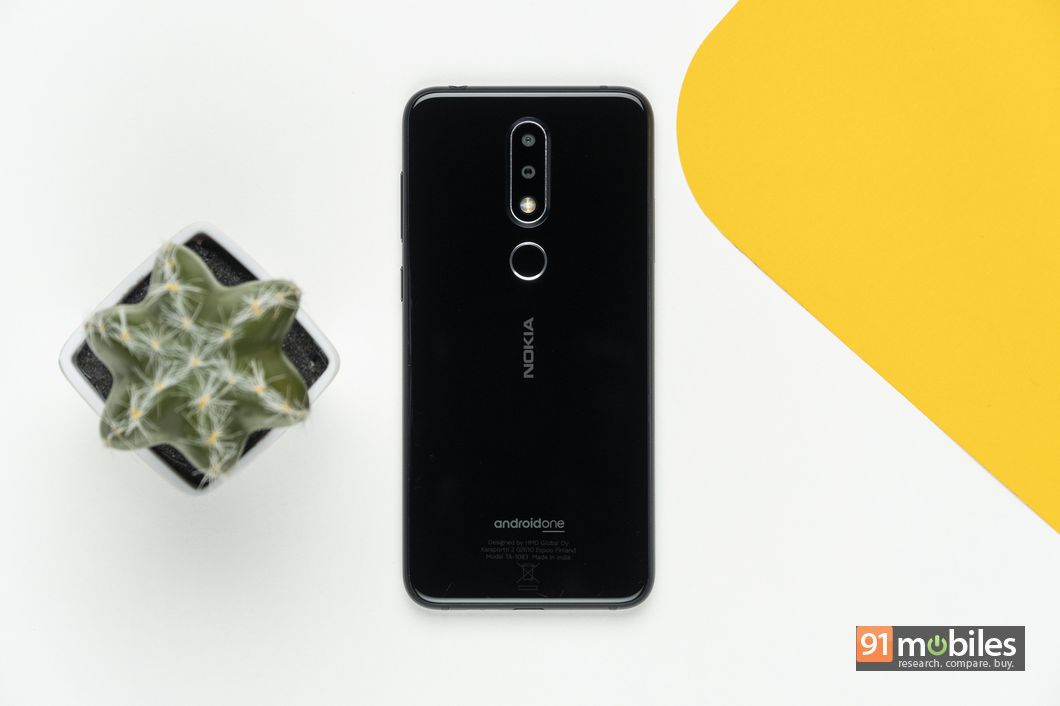 Moreover, you could even opt for the Xiaomi Redmi Note 5 Pro or the ASUS Zenfone Max Pro M1, both of which offer the same core specs as the Nokia 6.1 Plus, albeit are priced slightly lower. Lastly, if you can stretch your budget a bit, then you could get your hands on the much more powerful POCO F1 (review) or the Honor Play (review) too.

Consequently, while the Nokia 6.1 Plus is a good smartphone, it’s overshadowed by better offerings from the competition. And round and round we go.