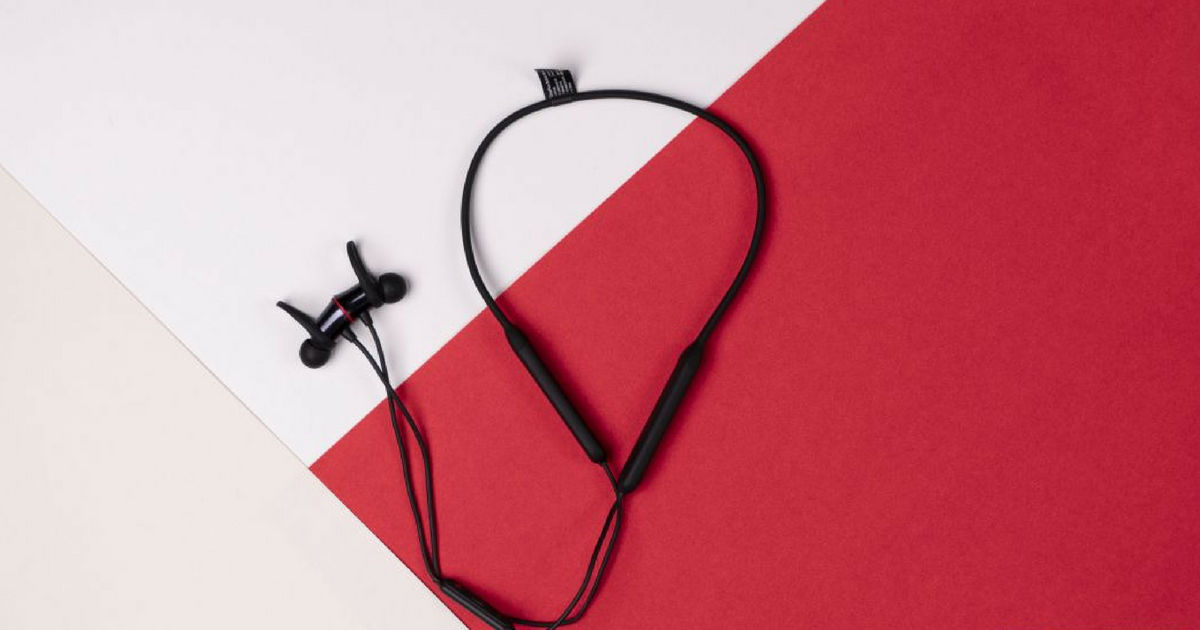 I swear by OnePlus smartphones as they are excellent bang-for-buck propositions. That being said, my favourite product from the company is not the recently-launched OnePlus 6 (review), but the Bullets V2 earphones. Unfortunately, 3.5mm headphone jacks on phones have become a thing of the past and these days, you’ll find the beloved analogue port only on a handful of flagship smartphones. This brings us to the review of the Bullets Wireless. Announced alongside the OnePlus 6, the Bullets Wireless are the company’s first wireless earphones and promise to deliver ‘more for less’. I’ve spent some time with the earphones in my ears and here’s what I think of them.

I unbox a handful of gadgets on a daily basis, which is why I always appreciate when a manufacturer goes above and beyond to satisfy the consumer with a product’s packaging and box contents. Case in point are the Bullets Wireless, which come bundled in a white cardboard box. Opening this, you’ll find the earphones, a fantastic bright-red squishy pouch which snaps open and shuts magnetically, a tiny USB Type-C cable which has been fashioned in the brand’s red-white colourway, along with differently-sized ear tips and fins. For the price you pay for the earphones, the unboxing experience is right up there with premium audio gear from FiiO and RHA. 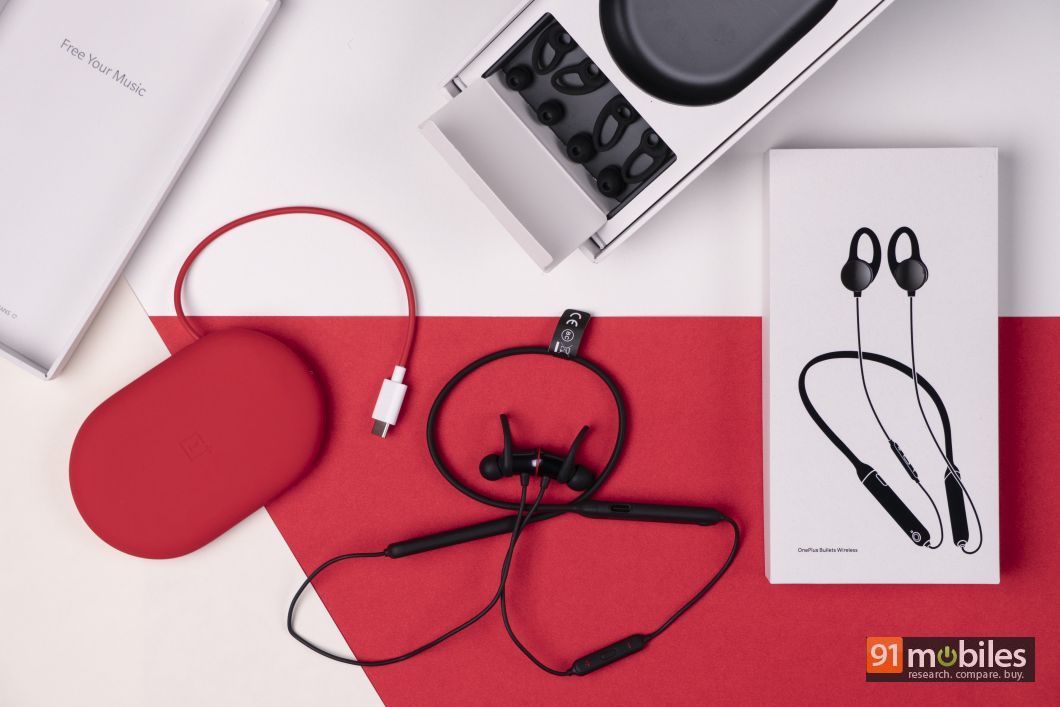 The Bullets Wireless are of the neckband variety and at first glance, look identical to the Beats X Wireless earphones from Apple. However, that’s not a bad thing considering you’re getting the design of a premium product for peanuts. Once you look past the similarities, you’ll find that the Bullets Wireless aren’t cheap clones, but rather, well-crafted and thoughtfully designed. The outer casings of the ear pieces have been constructed out of metal and the back makes use of glass, which makes the Bullets Wireless quite good looking. Moreover, thanks to the excellent weight distribution of the individual ear pieces and the use of a smooth, silicon-type neckband, the Bullets Wireless are extremely comfortable to wear too. To put things in perspective, I binge watched ten episodes of 30 Rock and listened to music for around two hours without noticing any sort of ear fatigue. That being said, the Bullets Wireless do protrude outwards, so lying on the bed on one’s side is a no go. 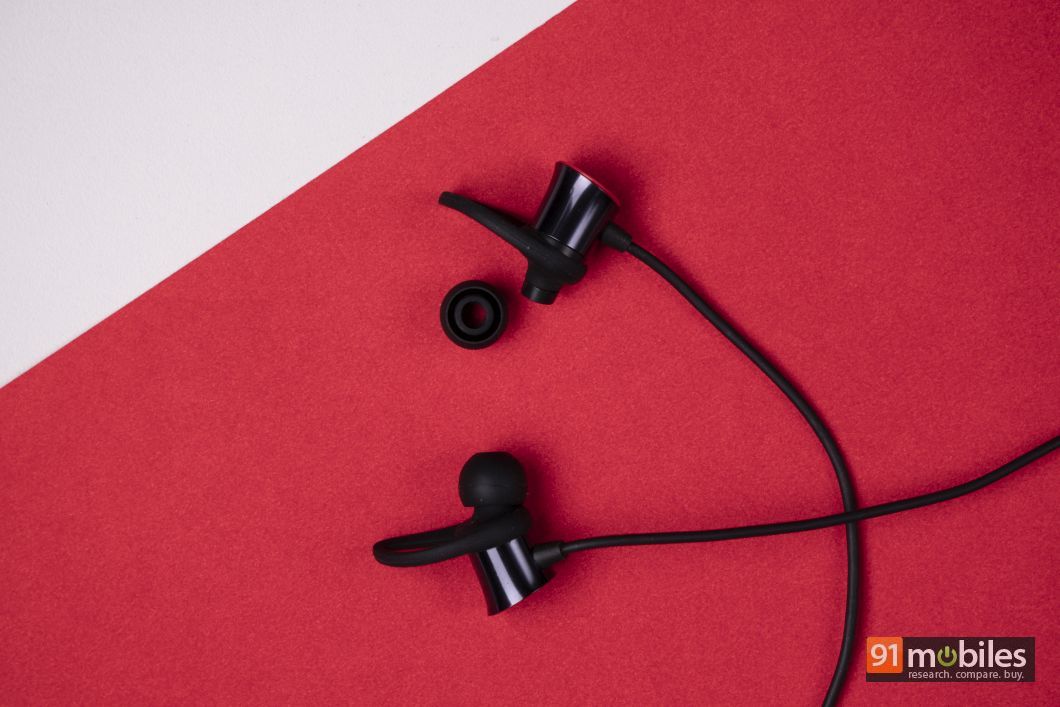 Now, while the OnePlus Bullets Wireless don’t ship with an IP rating, the company claims that the earphones’ weather resistant design should protect them from the rain. However, I couldn’t test these claims as the rain gods are yet to turn their attention to Gurgaon. That said, I did put the earphones through a sweaty workout in the gym and they worked just fine afterwards. I’d also like to mention that the earphones offer an excellent fit in the ears if you use them with both the provided ear tips as well as the fins. So, none of that ‘earphones falling out or the neckband sliding away when doing burpees’ nonsense. 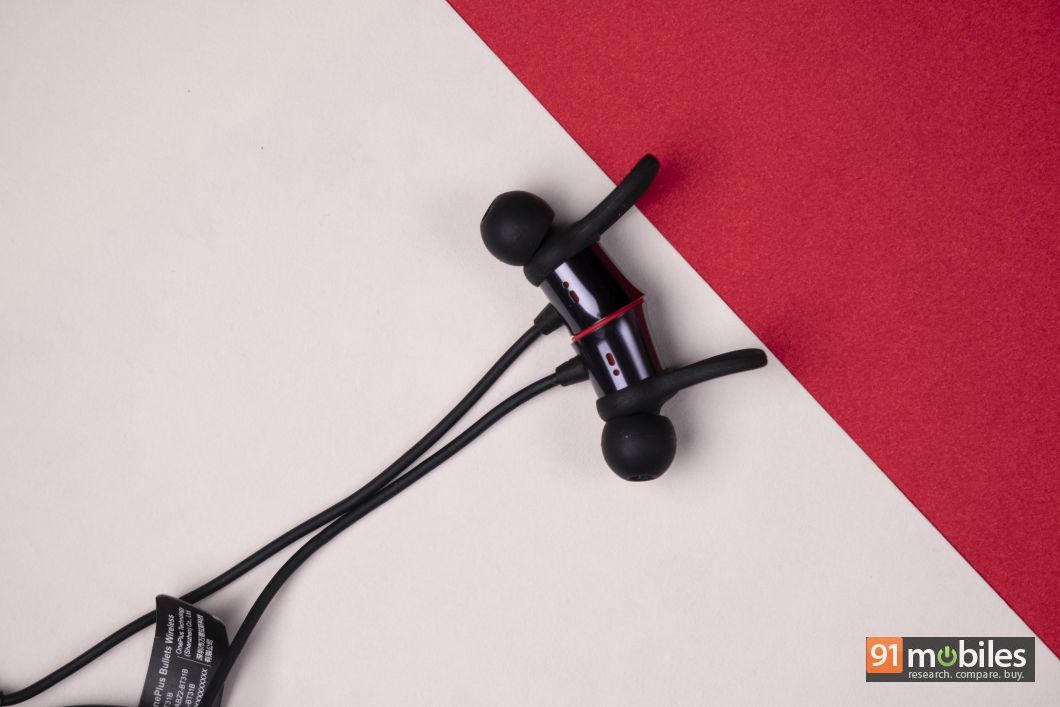 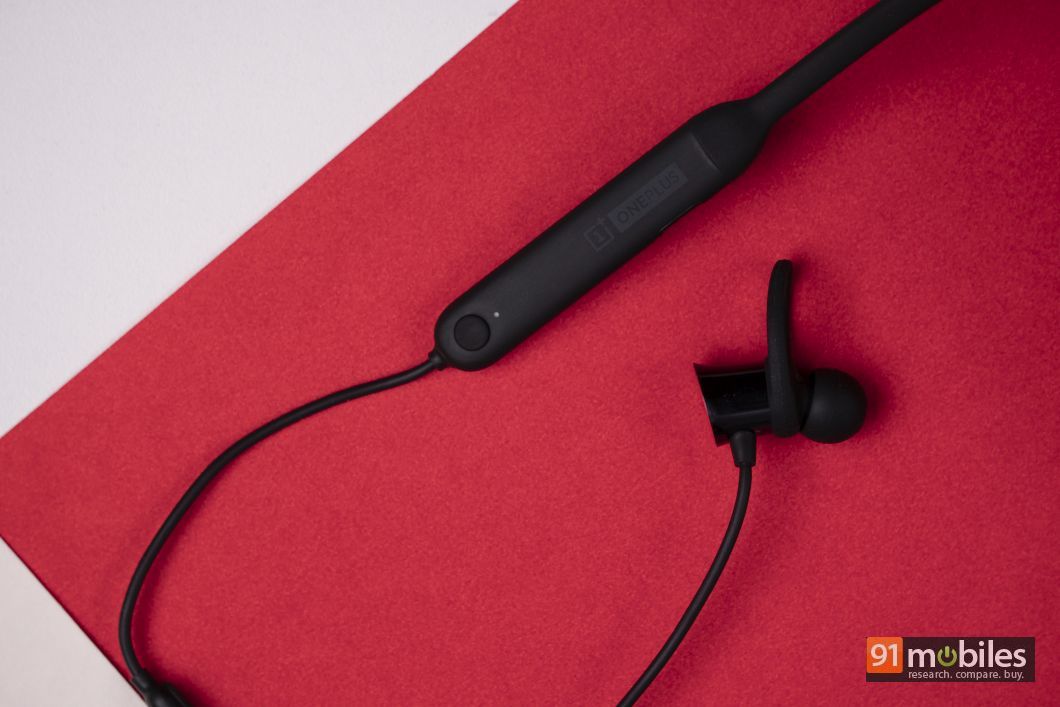 I tried this on a number of phones, including the OnePlus 6, the Apple iPhone 7 Plus (review) as well as the Samsung Galaxy S9+ (review), and got similar results every time. Basically, you won’t have to press down on the power button every time you want to turn on the Bullets Wireless, which is convenient, to say the least. As an added bonus, if you’re using the OnePlus 5 (review), the 5T (review) or the latest OnePlus 6, the earphones will automatically resume media playback when the earpieces are unsnapped. To do so, you’ll have to go into the Bluetooth settings, scroll down to an option which says, ‘Earphone mode’ and from there, turn on autoplay. 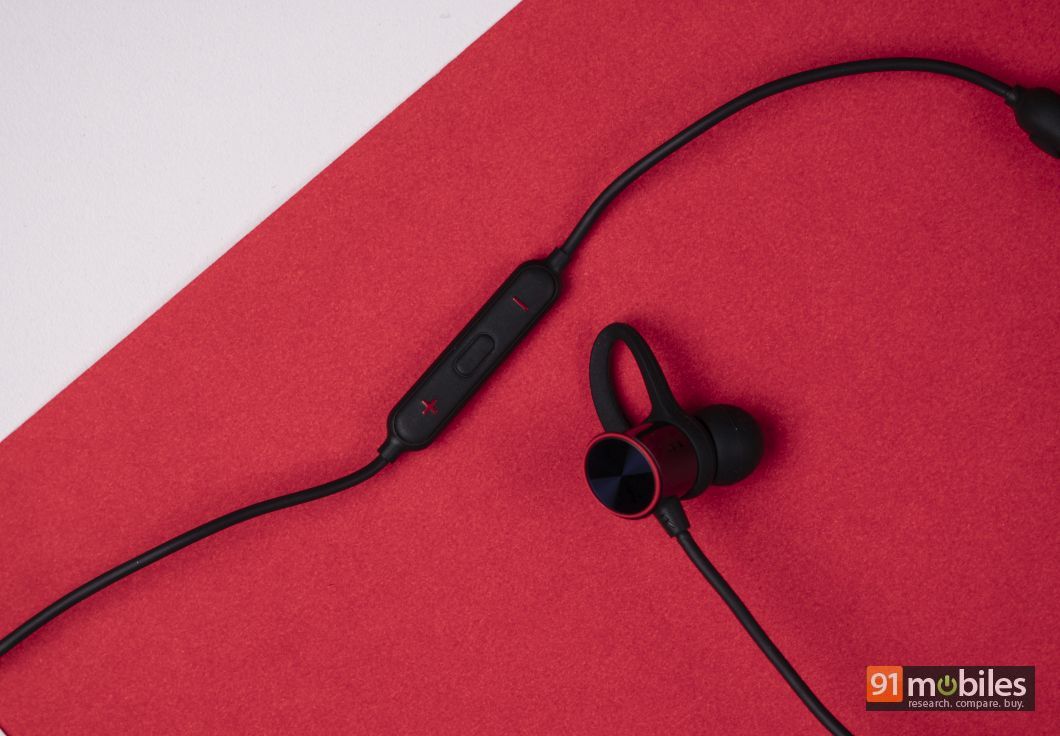 As is the case with most wireless earphones, the Bullets Wireless too ship with an in-line remote control. The controller comes with three buttons which can be used to increase/decrease the volume or play/pause a track. Double tapping the central button skips a track, and you can long press it to invoke Google Assistant on Android smartphones and Siri on Apple devices.

The solid design of the OnePlus Bullets Wireless would become moot if the earphones didn’t sound good. Well, after hours of listening, I can confirm that the earphones sound tremendous, but before we get into that, let’s talk specs. 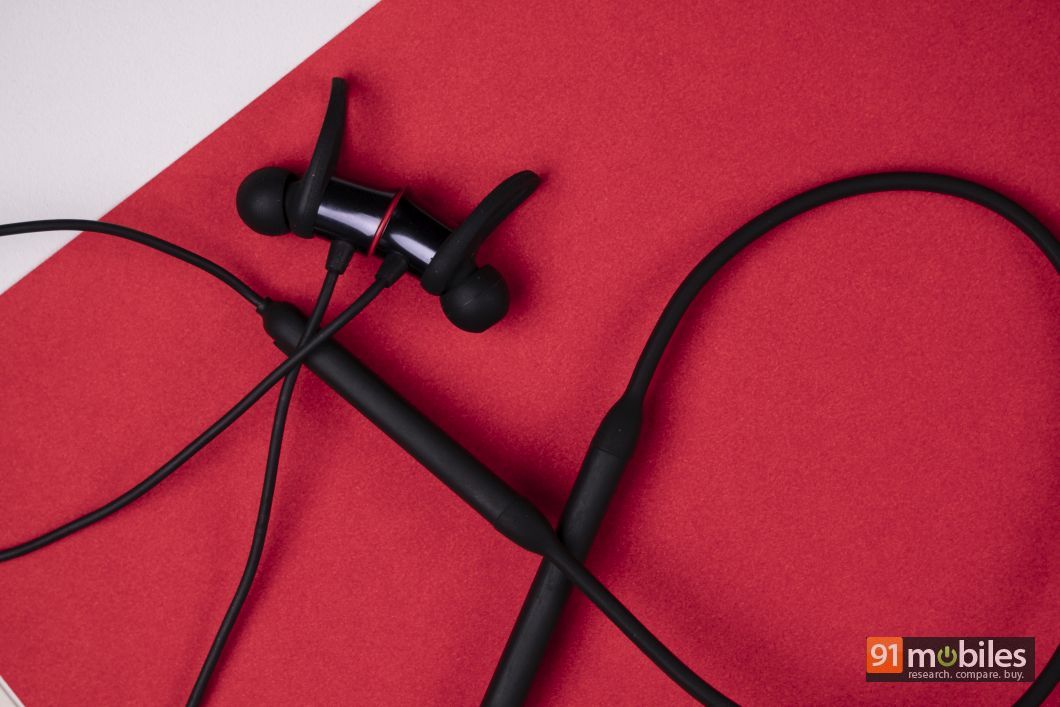 The OnePlus Bullets Wireless are driven by a 9.2mm driver positioned inside each earpiece. The earphones come with support for Qualcomm’s aptX codec and connect to compatible devices using Bluetooth v4.1. In what seems like an attempt to generate more hype around the product, OnePlus claims that the Bullets Wireless earphones feature energy tubes inside each ear piece, which as per the company, “stabilise sounds as they pass through, ensuring the earphones produce a clear output at all times.” While I have no means of testing the energy tubes in action, I can tell you that the Bullets Wireless do sound crystal clear. If I have to sum up the listening experience on the Bullets Wireless, I would say that the earphones are musical and a lot of fun to listen to. As far as the sound signature of the earphones is concerned, the Bullets Wireless offers a warm sound which lays emphasis on the low-end and the mid-range of the frequency spectrum. Consequently, there’s bass aplenty for all your EDM needs, though the presentation isn’t as tight as I would’ve liked it to be. A good example of the same is when you listen to the chorus in Clean Bandit’s Solo wherein, you will definitely tap your feet and swing your head to the thumping beats. However, you’ll also notice that the beats from the kick drum bloat upon impact. 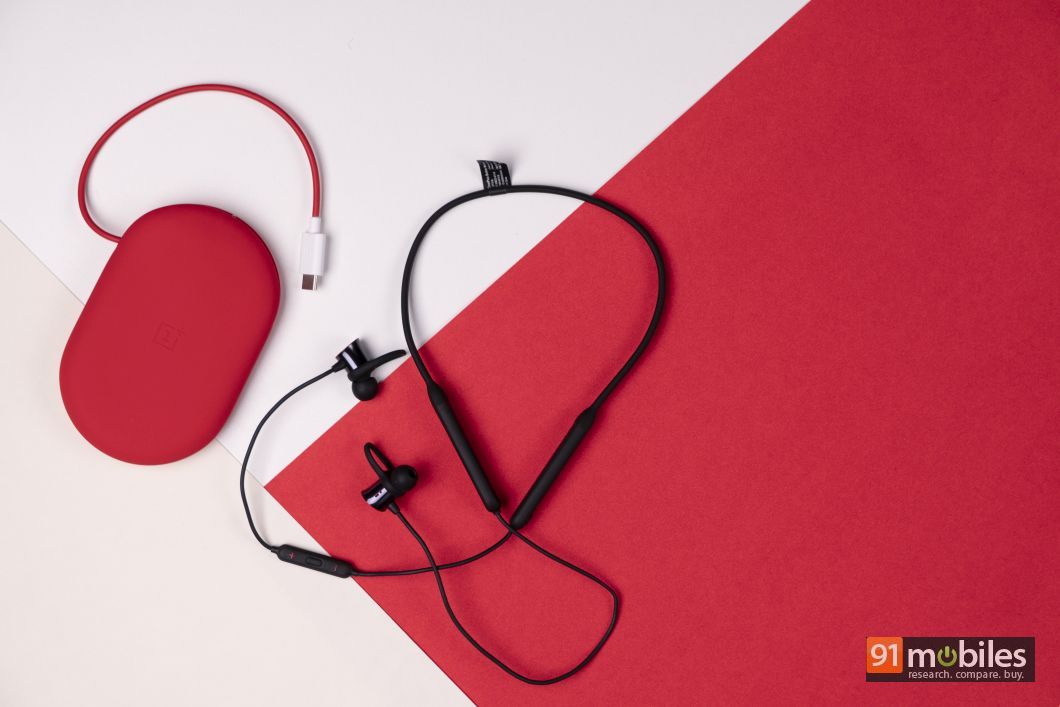 Turn the page over to the mids and you’ll find that the Bullets Wireless reciprocate a vocalist’s voice excellently. I’ve been listening to Belle Mt’s Hollow on repeat and the Bullets Wireless convey the entire vocal range of the singer flawlessly. On the flip side, the treble response of the earphones is average at best. While riffs from a guitar won’t bite your ears the way scraping fingernails on a blackboard does, the output isn’t clean or legible enough to enjoy rock/metal songs. The earphones boast an expansive soundstage too, which makes it so that the sound is not entering your ears through a single lane. Moreover, I was able to distinguish between different instruments playing in the background in The Avalanches Frontier Psychiatrist comfortably, which speaks volumes about the earphones prowess. 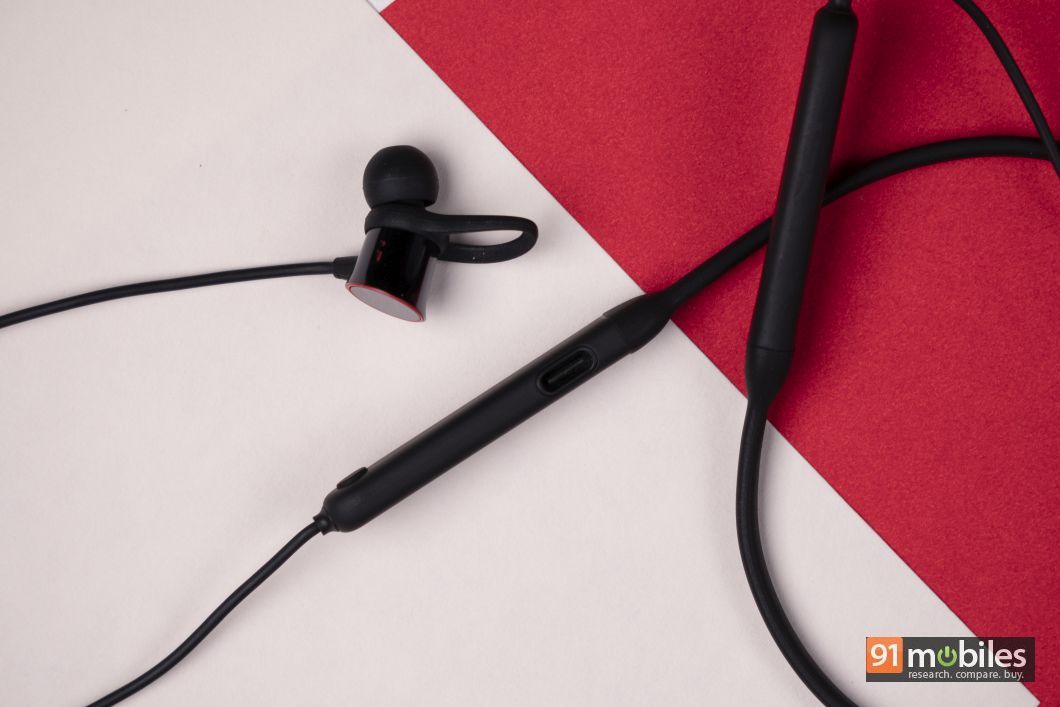 Lastly, let’s address the Bullets Wireless’ battery life and connectivity. During my testing, I noticed that the earphones fell short of the company’s eight-hour claim and lasted me around six hours at 70 percent volume levels before giving out. That said, you do get OnePlus’ proprietary Dash Charge technology which gives you a whopping five hours of playback off a ten-minute top-up. In terms of connectivity, the Bullets Wireless boasts a rock solid Bluetooth connection which doesn’t falter even when you’re running or commuting with the phone in your pockets. The call quality via the in-line mic was outstanding too, and I didn’t once hear my friends complain that my voice was breaking up when I was chatting with them on the phone. 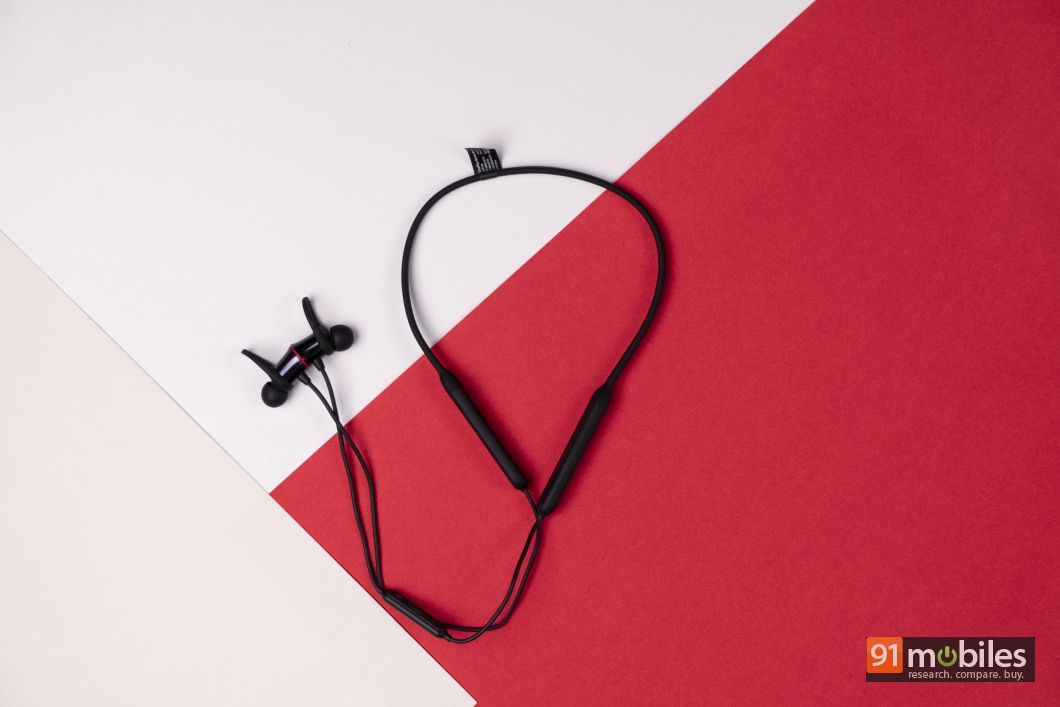 Be it the design or the earphones fun sound signature, I am yet to come across a more compelling pair of Bluetooth earphones priced under Rs 5,000. So, if you were hunting for a pair of affordable Bluetooth earphones, then your search ends with the Bullets Wireless.