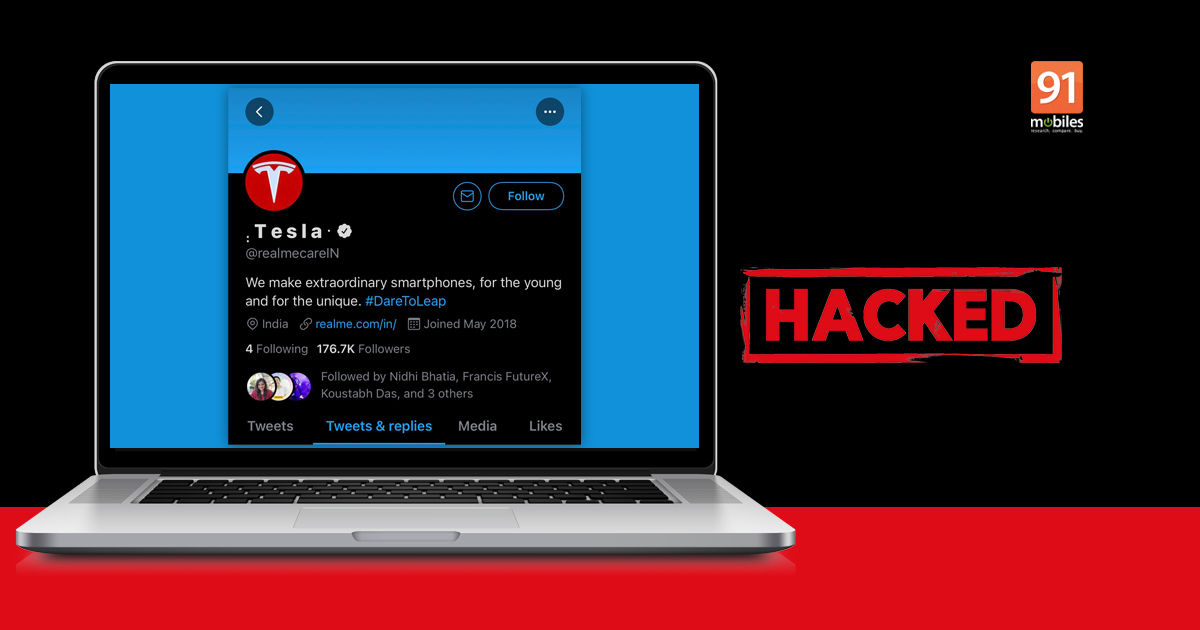 Update: Realme has provided a statement to 91mobiles on the recent hack. “We have been constantly monitoring the development of Realme India Twitter support account. We are also investigating the matter internally and will apprise you once we receive more information.”

Twitter seems to have learned nothing from its infamous hack form last year when accounts of several high-profile personalities were briefly hacked. This time around, the official Realme India Support handle on Twitter got briefly taken over by some unscrupulous elements. As always, the hackers used this opportunity to run a cryptocurrency scam by masquerading the Realme Twitter handle as Tesla and replying to one of Elon Musk’s tweets. However, the hackers were fairly sloppy, as they forgot to change the text in the bio. Furthermore, the spacing between the letters looked suspicious too.

While the hackers may have had their fifteen minutes of fame, Twitter has restored the account to its rightful owners. The shady tweets have been deleted too. The account had 1.76 lakh followers at last count. Noted tech tipster and industry insider Ishan Agarwal was among the first people to highlight the hack.

It is very unlikely that anybody fell prey to the scam the hackers were trying to perpetrate, given that they asked users to visit a website instead of posting a BTC wallet address directly. Usually, the go-to technique used by crypto scammers is to promise double the returns on an initial ‘investment’ to a BTC wallet.

realme’s official India Twitter Support account has been hacked and is being used to do crypt0 scam under Elon Musk’s tweets pic.twitter.com/WFy4iz7iDi

Interestingly enough, Realme has been very silent about the matter, at least on the microblogging platform. The least it could do was to acknowledge the hack with a tweet in the interest of transparency, especially considering the company is tasked with handling the sensitive personal information of millions of users.

The brand said the following to India Today: “We have been constantly monitoring the development on Realme India Twitter support account. We are also investigating the matter internally and will apprise you once we receive more information.”

However, this seems to be more of a problem with Twitter’s security. Hacks such as this one may be infrequent but they do pop up from time to time, indicating that there are still many glaring holes in the microblogging platform’s security.