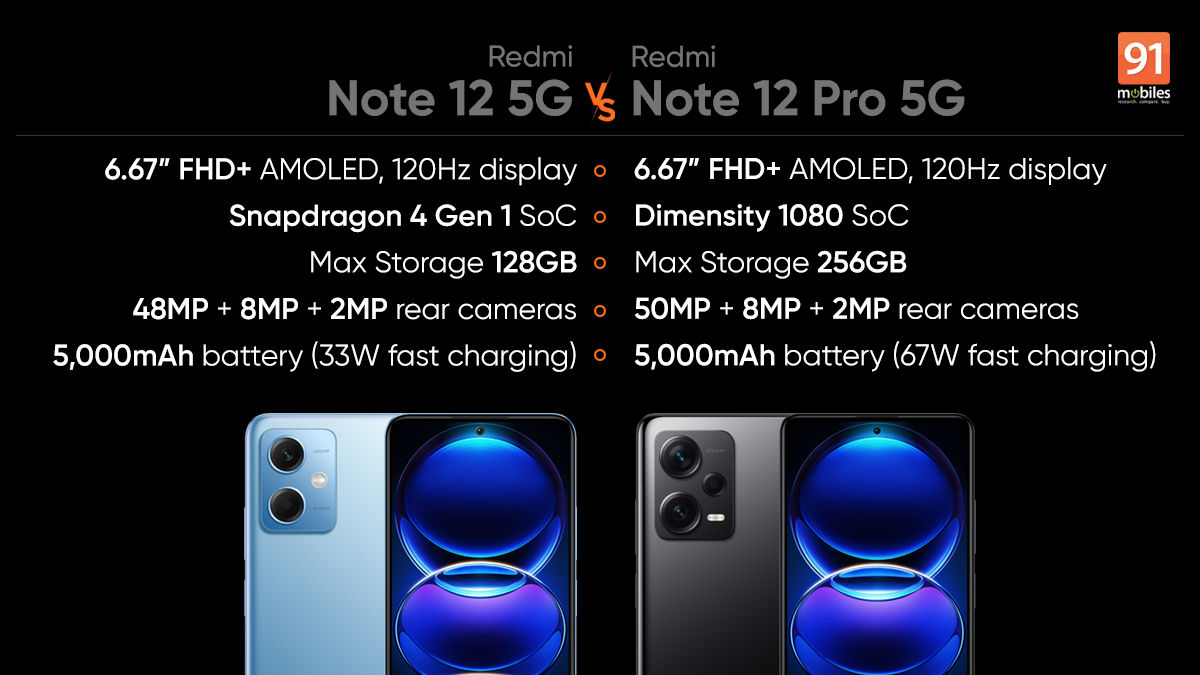 Redmi Note 12 5G and Redmi Note 12 Pro 5G were launched in India on Thursday. Both of these smartphones offer major improvements over their predecessors, the Redmi Note 11 and Note 11 Pro, especially in terms of photography, connectivity, and cameras. Xiaomi touts the phones as ‘SuperNotes’ for offering the best in class specifications. With the series starting at Rs 17,999, let’s take look at how different the vanilla Redmi Note 12 is from the Redmi Note 12 Pro model.

Now let’s take a look at various aspects of Redmi Note 12 and Redmi Note 12 Pro such as design, display, performance, cameras, and battery.

The Redmi Note 12 and Note 12 Pro flaunt a minimalistic glass pack panel along with an elevated camera housing for the triple camera setup. Coming to the front, there is a centered punch-hole camera atop both devices’ displays. As for the colour options, the vanilla Note 12 is available in Matte Black, Mystique Blue, and Frosted Green while the Redmi Note 12 Pro comes in Obsidian Black, Arctic White, Iceberg Blue, and a special Stardust Purple.

Both Redmi Note 12 and Redmi Note 12 Pro are equipped with a 6.67-inch FHD+ AMOLED display with support of 120Hz refresh rate, up to 240Hz touch sampling rate, and DCI-P3 color gamut along with 1200 nits of peak brightness. However, the ‘Pro’ model ups the ante by featuring AdaptiveSync which changes the display’s refresh rate between 30, 60, 90, and 120Hz as opposed to just 60Hz and 120Hz variations on the vanilla Note 12. Furthermore, the Redmi Note 12 Pro also comes with Dolby Vision and Dolby Atmos support for an enhanced content viewing experience along with 1920Hz PWM dimming technology that prevents eyestrain from looking at the screen for long durations.

When running heavy tasks such as playing graphic-intensive games or editing videos on the go, Redmi Note 12 Pro’s 12-layer heat dissipation system helps in sustaining the maximum performance of the device. While in the case of the standard Note 12, Redmi has put in dual graphite sheets that aid the handset in similar scenarios. 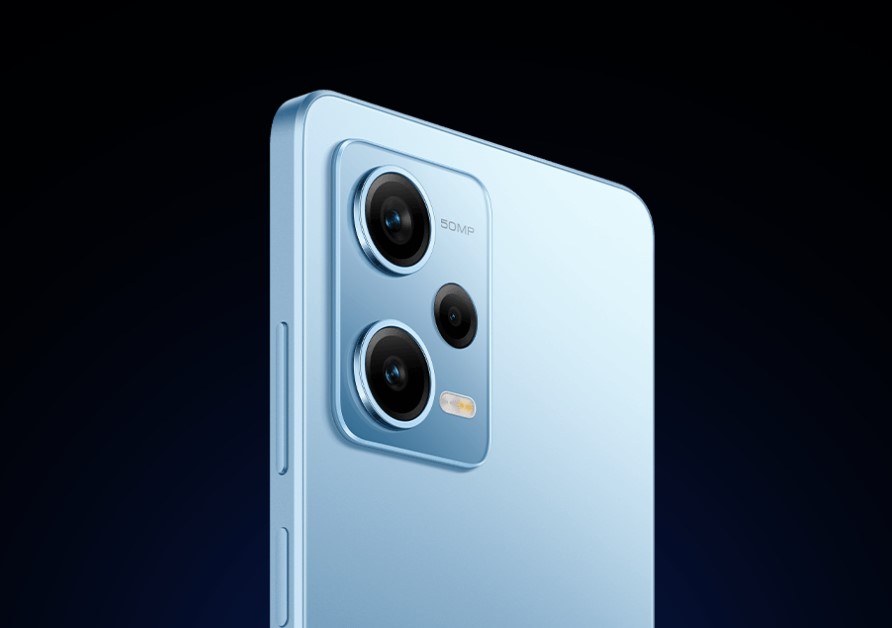 Cameras are where both phones have taken a huge leap from their predecessors. Starting with the Redmi Note 12, the device packs in a triple camera setup consisting of a 48MP primary camera, an 8MP ultra-wide sensor, and a 2MP macro lens. There is a 13MP camera on the front for selfies and video chats.

Now coming to the Redmi Note 12 Pro’s optics, this is where things start getting interesting. The handset gains a 50MP IMX766 OIS-enabled main camera accompanied by an 8MP ultra-wide lens and a 2MP macro lens along with a 16MP selfie snapper. Redmi has gone further and embedded the ‘Xiaomi AI Image Solution’ into the camera for superior clicks in various lighting situations. Furthermore, the Note 12 Pro also has some interesting camera modes up its sleeves such as a Pro Vlog mode and Film Frames. 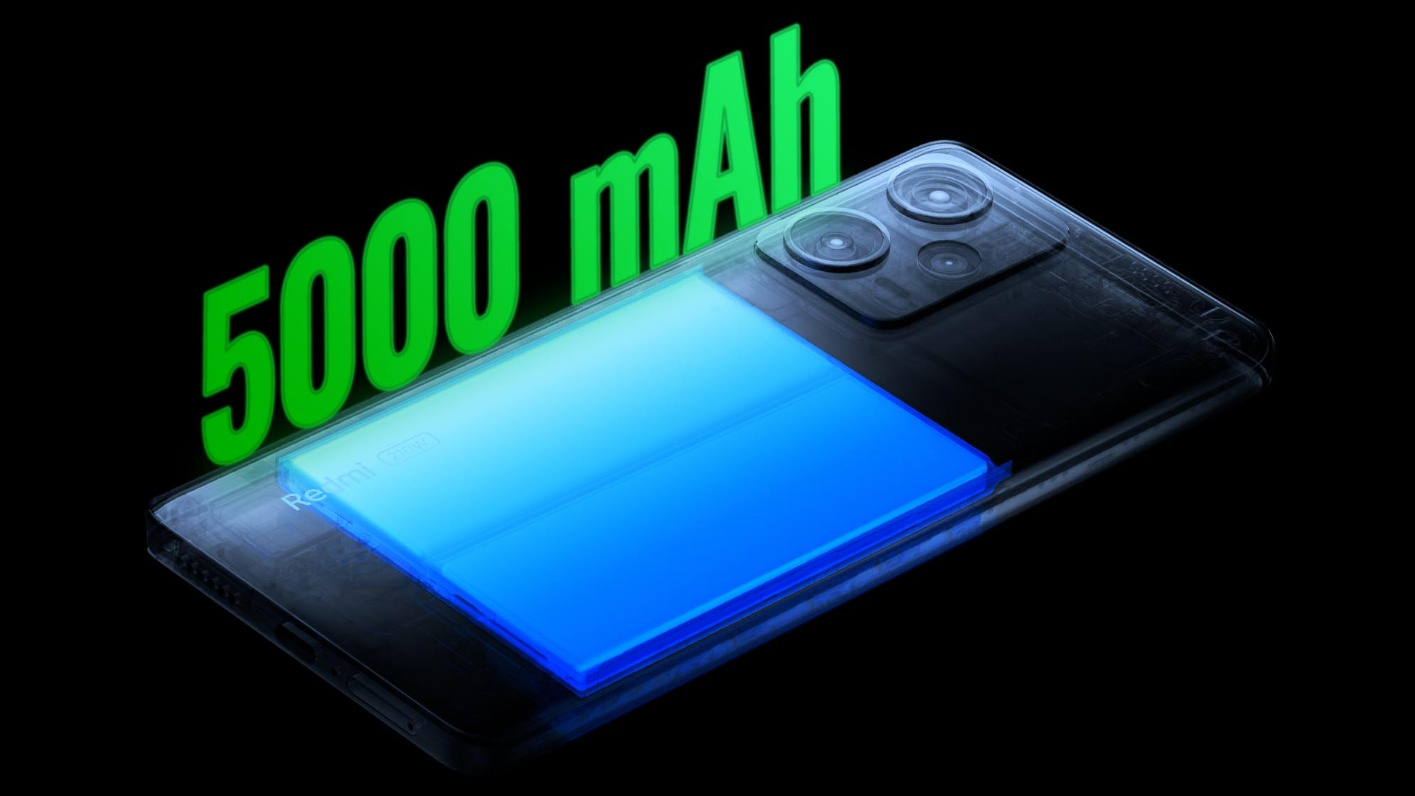 A 5000mAh battery unit is present on both the Redmi Note 12 and Redmi Note 12 Pro. The differences lie in the charging speeds where the vanilla Note 12 gets 33W fast charging support while the Note 12 Pro is equipped with Xiaomi’s proprietary 67W Turbo Charge technology, which can juice up the phone from flat to full in a matter of minutes. Xiaomi has also bundled the 33W and 67W chargers in the respective boxes.