“The Galaxy A6+ looks premium and feels like a flagship”

Samsung’s flagship smartphones in the Galaxy S and Note series tend to grab the most headlines, but it’s not as if everyone can afford them. However, the South Korean brand usually takes the best features from these phones and eventually implements them on its offerings in the mid-price range. This trend has been going on for quite some time and the Galaxy A6+ is no exception to the rule. Does the new smartphone from Samsung have what it takes to compete in the ever competitive and price-sensitive Indian market? Read the detailed review below to figure out the answer. 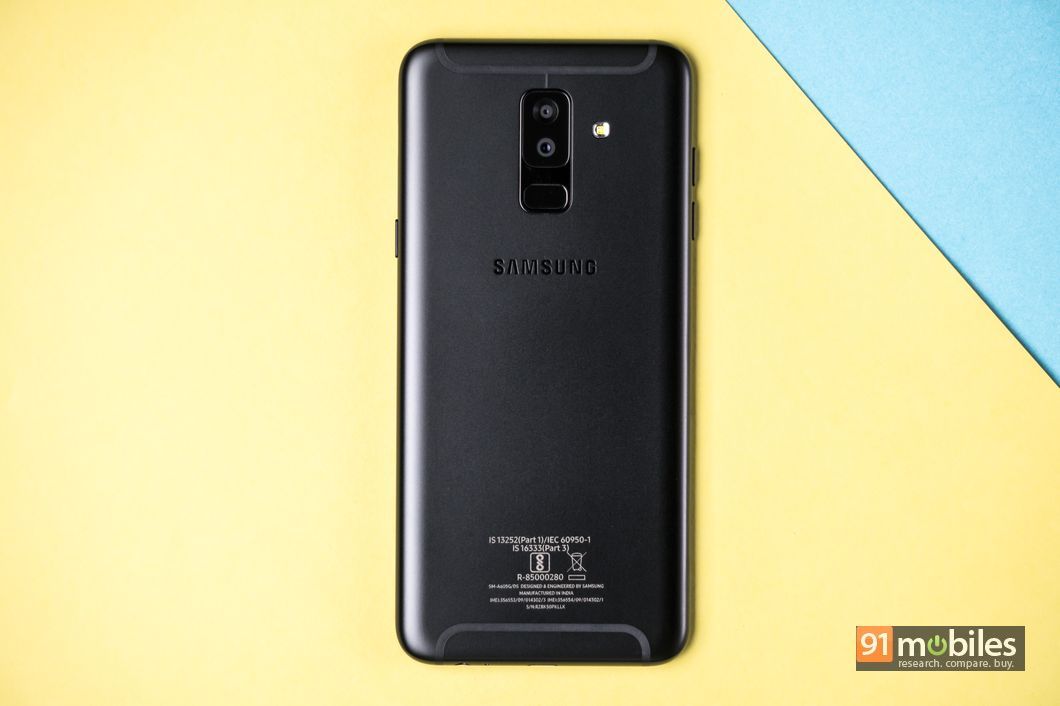 Instead of beating around the bush, let’s just put it right here – the design is one of the strongest, if not the strongest, selling points for the Galaxy A6+. With narrow bezels and a premium finish, the handset feels like a flagship in the hand. It’s great to see that Samsung is trying to improve the build quality and design on its mid-range offerings, especially since this was not the case a few years back. The handset is easy to hold in one hand and the matte finish at the back ensures that it doesn’t feel slippery either. However, the matte back is a fingerprint magnet. After the feedback received from the Galaxy S8 smartphones, the brand seems to have decided on the best location for the fingerprint sensor, which is placed in the middle at the back, right below the dual camera setup (same as Galaxy Note 8 and Galaxy S9 models). I found that the fingerprint sensor on the A6+ was easily accessible, but it could have been bigger in size for convenience. 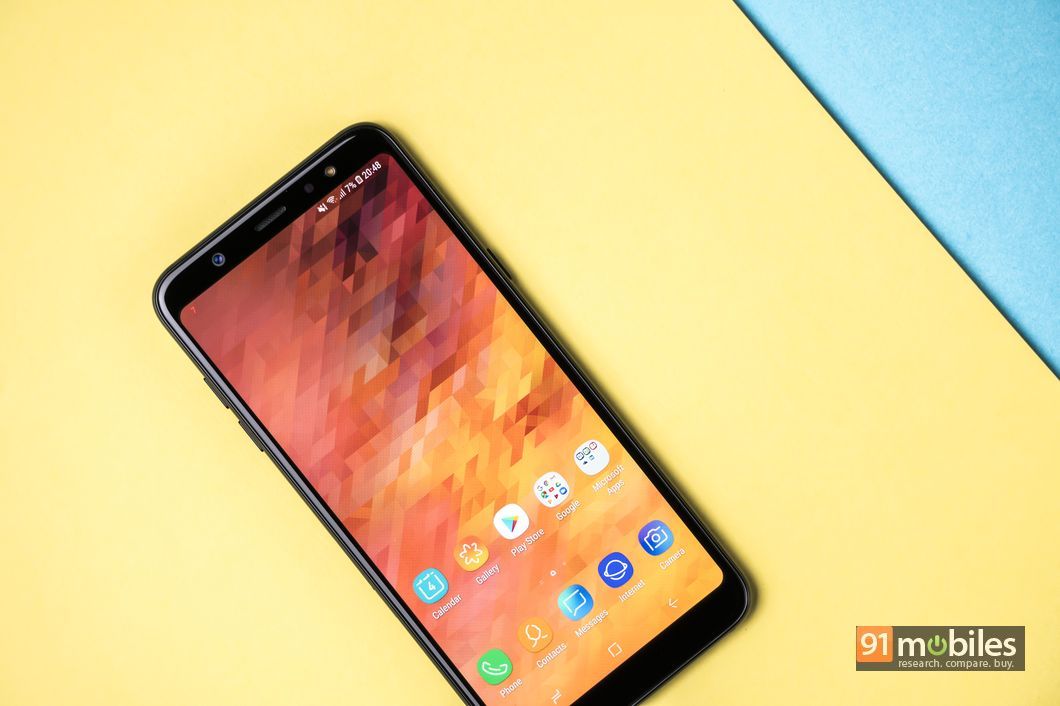 The power button is located on the right side of the handset below the side-mounted loudspeaker. This is definitely not a smart design choice by the company, as I found that every now and then, I ended up covering the speaker and muffling the sound with my hand while watching videos or playing games. I personally found that the antenna lines add to the aesthetics of the phone rather than causing any diminution in this aspect. On the left, there’s the dual-SIM card tray, which features a dedicated slot for a microSD card. The micro-USB charging port and 3.5mm headphone jack are placed at the bottom. About this, we can just say that a USB type-C port should have been included but unfortunately, that’s not the case.

The Galaxy A6+ sports a 6-inch FHD+ Infinity display with an aspect ratio of 18.5:9. If we talk about the bezels, they are thinner than some other handsets, as thin as Galaxy S9 or even S8 for that matter. The display quality from Samsung, as one might expect, is pretty impressive. While the colours do appear slightly oversaturated and punchy at times, if you are the sort of person who consumes a lot of multimedia content, you will likely be impressed by the display on the Galaxy A6+. The viewing angles, as well as the maximum screen brightness, are both pretty good, as we didn’t face any issues while using the handset outdoors.

Samsung Galaxy A6+ Design Gallery
1 of 13

The Galaxy A6+ comes with a rear-facing dual camera setup, comprising a 16MP primary sensor with f/1.7 aperture and a secondary 5MP sensor with f/1.9 aperture, accompanied by an LED flash. At the front, the handset sports a 24MP sensor with a f/1.9 aperture, also accompanied by an LED flash, for video calling and selfies. For us, the handset managed to click some really good pictures in apt light settings with both rear and front cameras. In the default camera app, you get the regular modes including Panorama, Night, Continuous shot, Sports etc. With the Pro mode, users get the option to adjust ISO and white balance to manually tweak the image settings. There are AR stickers, if you use them, available in the default camera app as well. 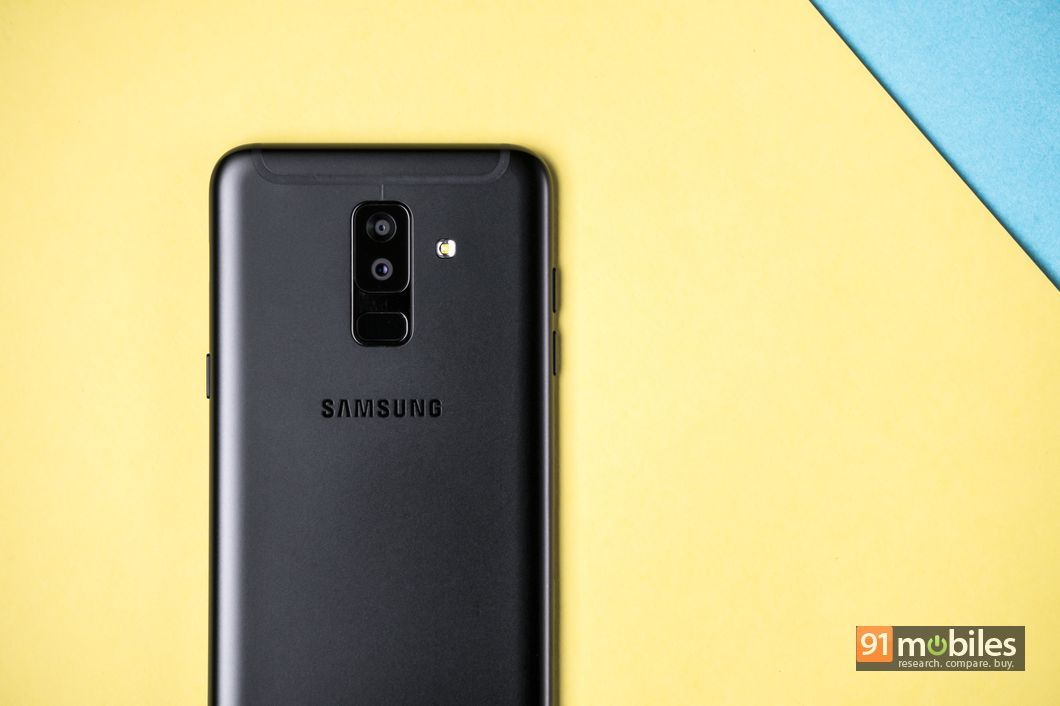 The Live Focus feature, which has previously been seen on Galaxy Note 8 and Galaxy S9+, is also being offered with the A6+ and allows users to adjust background blur even after clicking the image. However, we found that the handset is not able to detect edges quite well and ends up producing some unwanted distortions in certain images. In comparison, the Selfie focus feature, which also allows you to blur the background, tends to perform much better.

In low light settings, the pictures can turn out to be slightly grainy. While Samsung has improved the low-light performance of its flagship models drastically over last few years, it is certainly not the case here. On the flip side, the selfies are good and contain a lot of details when taken in apt light settings. See our camera gallery below to check out the performance yourself:

The new A-series handset from Samsung is powered by a Snapdragon 450 SoC coupled with 4GB of RAM. The smartphone comes with 64GB of built-in storage, which is further expandable via microSD card up to 256GB. If we talk about performance, the Galaxy A6+ manages to handle most apps and games, but it should be noted that there are certain smartphones that are available at a much cheaper price with the same processor and memory. Considering that the handset from Samsung is priced slightly higher, a better processor would have definitely made a stronger case for the A6+. However, that being said, the A6+ managed to play graphically intensive games like PUBG at even high graphics settings with relative smoothness. The handset managed to tackle multitasking without a hiccup as well. 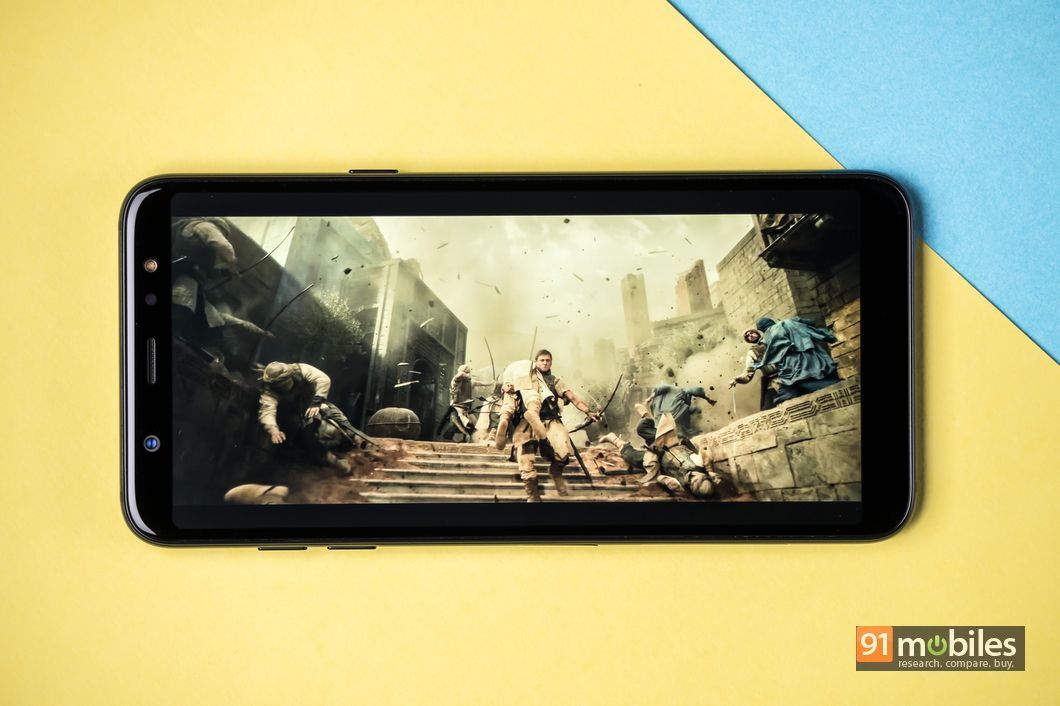 The Galaxy A6+ runs Android 8.0 Oreo-based Experience 9.0 out of the box, which comes with utility tools and apps along with some Microsoft apps that are preinstalled and cant be removed. The UI feels lackluster and cluttered in front of stock Android, which is increasingly being offered by several phone manufacturers these days. Now that we are talking about the OS, the company has offered services like digital voice assistant Bixby, the company’s payments service Samsung Pay mini, and Samsung Mall (an app that helps you discover items across e-platforms), which were earlier limited to the flagship models. Truth be told, I hardly use Bixby or Samsung Pay on the Galaxy S8+, which has been my daily driver for more than 8 months now, and I hardly used these services on Galaxy A6+. While Bixby still feels a million miles behind Google Assistant, Samsung Pay mini can still be a useful service for many. Thankfully, unlike the flagship models, the company has not included a dedicated Bixby button on the Galaxy A6+, but when you are on the homescreen and swiping left (we all do that out of habit every now and then), Bixby shows up in a rather sluggish manner. Even if you like digital assistants, having multiple options on the same phone make little to no sense at all. 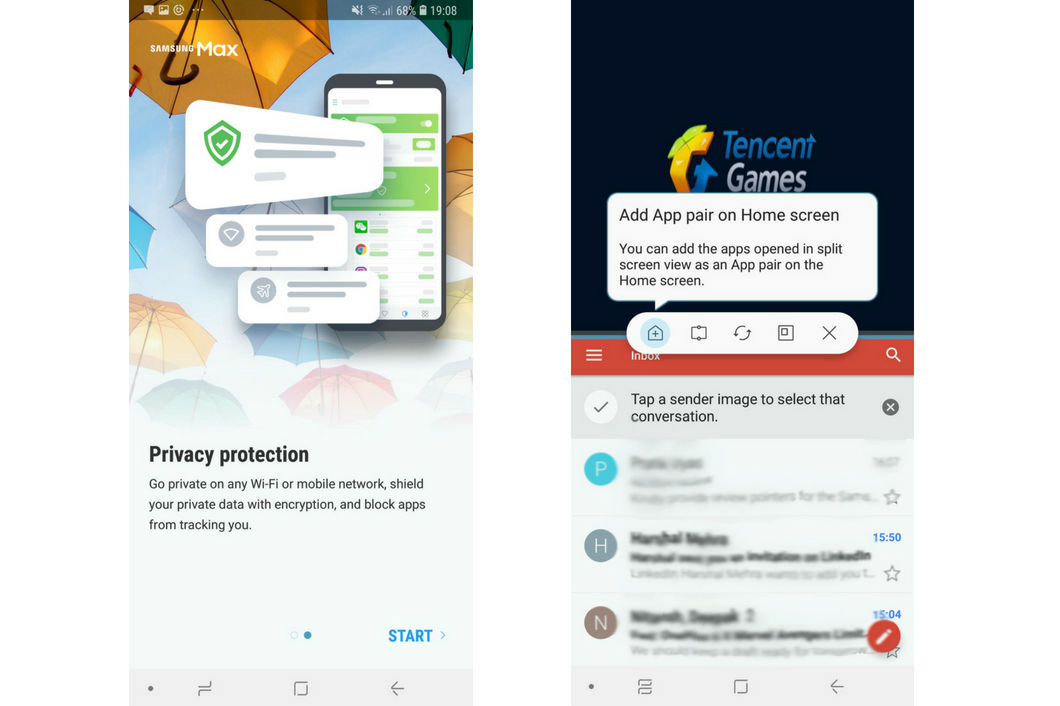 Talking about notable features, Chat Over Video allows users to have a translucent overlay of messaging applications over videos to allow texting while watching videos. This feature can be useful for some but doesn’t add a lot of value by itself. There is Samsung Max feature for privacy protection on Wi-Fi and mobile networks. And then there are other useful features that come along with Android Oreo, such as app pairing.

The Galaxy A6+ houses a rather large 3,500mAh battery. In theory, the handset should easily manage to last through a day and more. If we talk about real-life usage, the handset managed to last through the day even on heavy usage for us. Despite watching videos, playing games, and browsing Internet through the day, we did not run out of juice before the end of the day. In our video loop test, where we play an HD video with the loudspeaker on 50 percent volume and display on 50 percent brightness, the handset managed to last around 16 hours on a single charge. This means the Galaxy A6+ should easily last through a day of heavy use for most users. As the handset sports an impressive display, the combination of these two aspects make the Galaxy A6+ a perfect companion for media consumption while on road away from the wall charger.

While the Samsung Galaxy A6+, priced at Rs 25,990, ticks some of the crucial aspects of a good smartphone, i.e. design, display, and battery life, some other specifications let it down massively. Just let it sink in that Xiaomi Redmi Note 5 (review), which can be grabbed for as low as Rs 9,999, comes with a Snapdragon 625 processor, which is slightly better than the Snapdragon 450 found on Galaxy A6+. There is strong competition from the likes of ZenFone Max Pro M1 (review) as well as Xiaomi Note 5 Pro (review), both of which are priced well below the Galaxy A6+. The issues we faced with Live Focus and loudspeaker only make the matters worse. To put it simply, the Galaxy A6+ is a good smartphone for those who want a really capable device for multimedia consumption. For those who look at all aspects of a smartphone before purchase, there are other options that offer much more value for money than the Samsung Galaxy A6+.