Samsung’s Galaxy S series and the Note portfolio of smartphones have always pushed the boundaries for flagship smartphones, but that doesn’t necessarily mean that these devices spin the fortunes of the South Korean titan. The brand’s money-makers are its budget and mid-tier offerings, which currently, include the phones in the Galaxy J and A series. That’s probably the reason why the Chaebol recently launched a slew of models in the Indian market in these ranges, in the form of the J6, J8, A6 and the A6+. While we’ve already reviewed the A6+, it’s now time to turn our attention to the most affordable smartphone in the new lineup… the Galaxy J6 (first impressions). 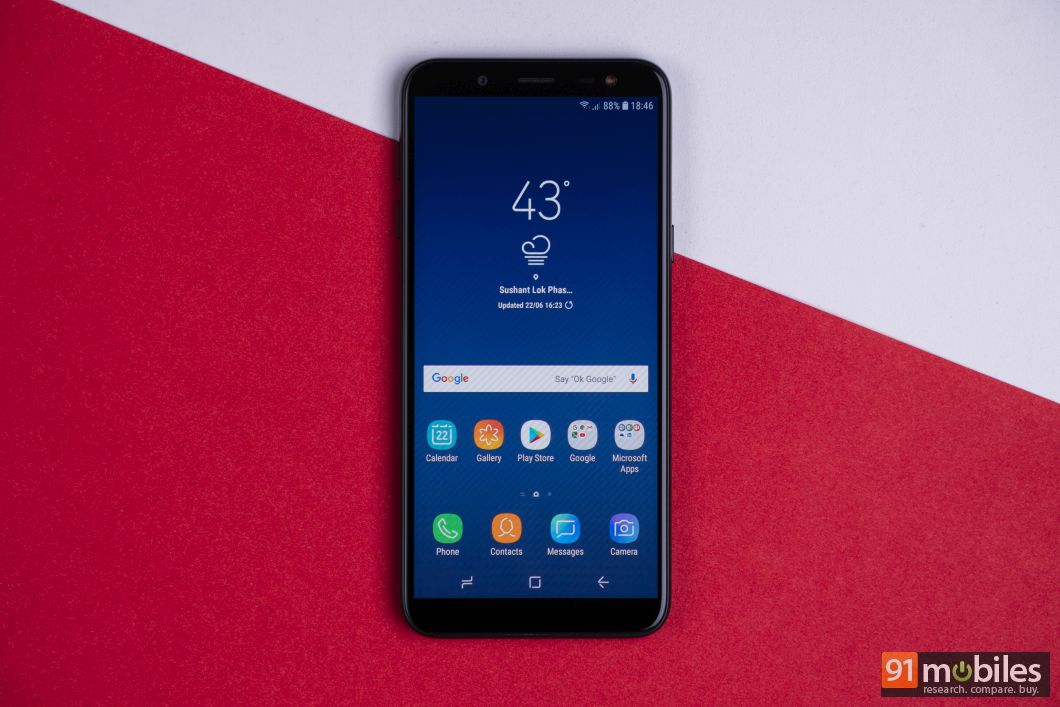 The pull factor of the Samsung Galaxy J6 is its Infinity Display, which ensures that the smartphone has minimal bezels up front. While the phone can’t boast a curved display, it does have thin bezels on the sides, though the bezels are quite wide on the top and bottom. That said, the budget offering does come across as a modern smartphone and while it may not turn heads, it won’t be feeling left out either. 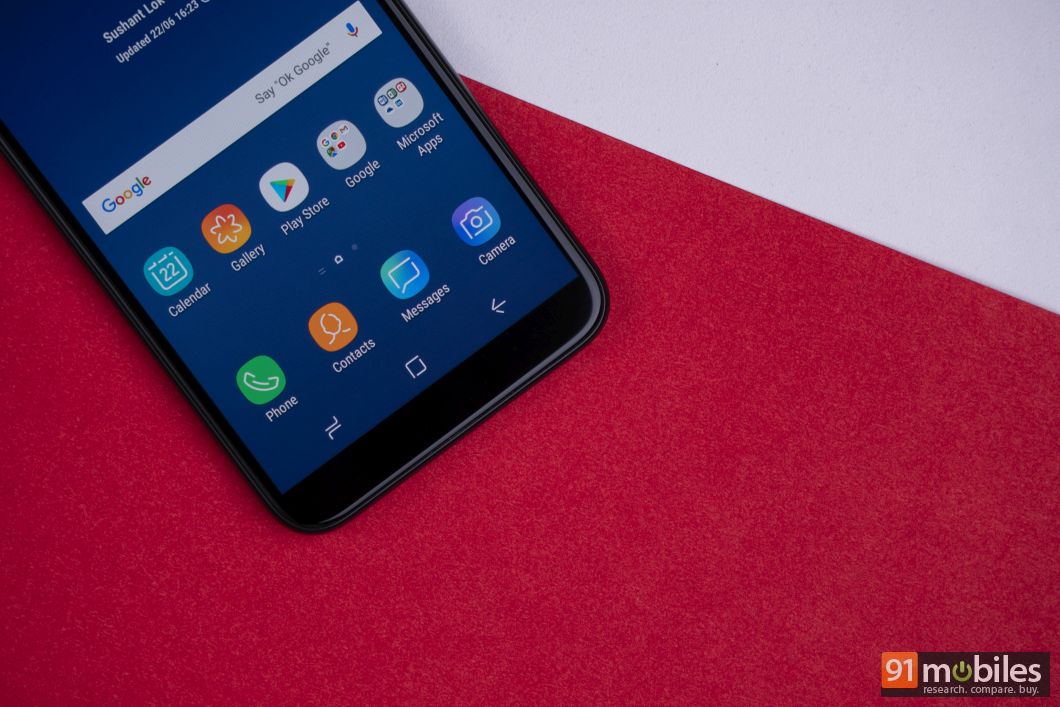 The Galaxy J6 features a unibody construction with a metallic finish. Our review unit comes in black, which adds to its premium appeal, though you can also opt for a shinier gold colour. The smartphone is quite lightweight at 154g, and is relatively thin with a frame measuring 8.2mm. The button and port placement are similar to its siblings in the J series… though it still seems weird to see the speaker grille on the right spine. This placement however, ensures that the sound isn’t muffled even when you are using the phone in the landscape mode. On the flip side, you’ll need to ensure that your fingers don’t cover the speaker when you’re holding it in the vertical orientation. As far as the sound output is concerned, it’s decent but not as loud as handsets that offer stereo speakers.

While Samsung should be applauded for bringing an 18.5:9 aspect ratio screen with Super AMOLED tech to its budget offerings, the J6’s display panel features a resolution of 720 x 1,480 pixels. While it results in an acceptable pixel density of 293 ppi, it does feel behind the competition that offers the crisper full HD resolution. Having said that, the display is vibrant thanks to the AMOLED technology and is sufficiently bright even outdoors. 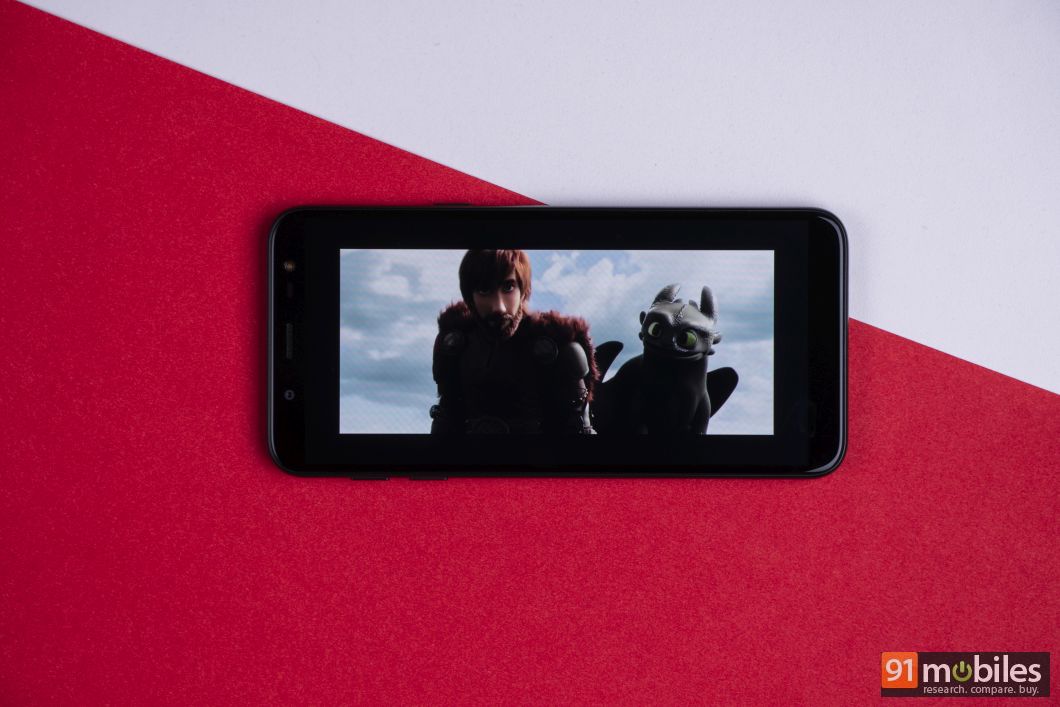 Unfortunately, the Galaxy J6 skimps on the basic sensors, just like the previous offerings in the J series. This includes an ambient light sensor that adjusts the screen brightness automatically according to available light and a proximity sensor which puts the display panel to sleep when your face is near it. There’s no gyroscope either, which means you won’t be able to play games like Asphalt 8 by turning the smartphone.

Under the hood, the Samsung Galaxy J6 comes powered by the brand’s in-house Exynos 7870 chipset. The SoC comes with Mali-T830 MP1 graphics and eight Cortex-A53 cores, which are clocked at 1.6GHz. While the chipset is pretty good, it’s more than two years old and that shows when you are playing graphics-heavy titles. That said, the gaming experience, while racing in Asphalt 8 or killing zombies in Unkilled, remains quite enjoyable, save for some minor slowdowns here and there. Day-to-day tasks also run fine and there isn’t any issue with multitasking either as the smartphone comes with either 3GB or 4GB of RAM, depending upon the variant you choose. 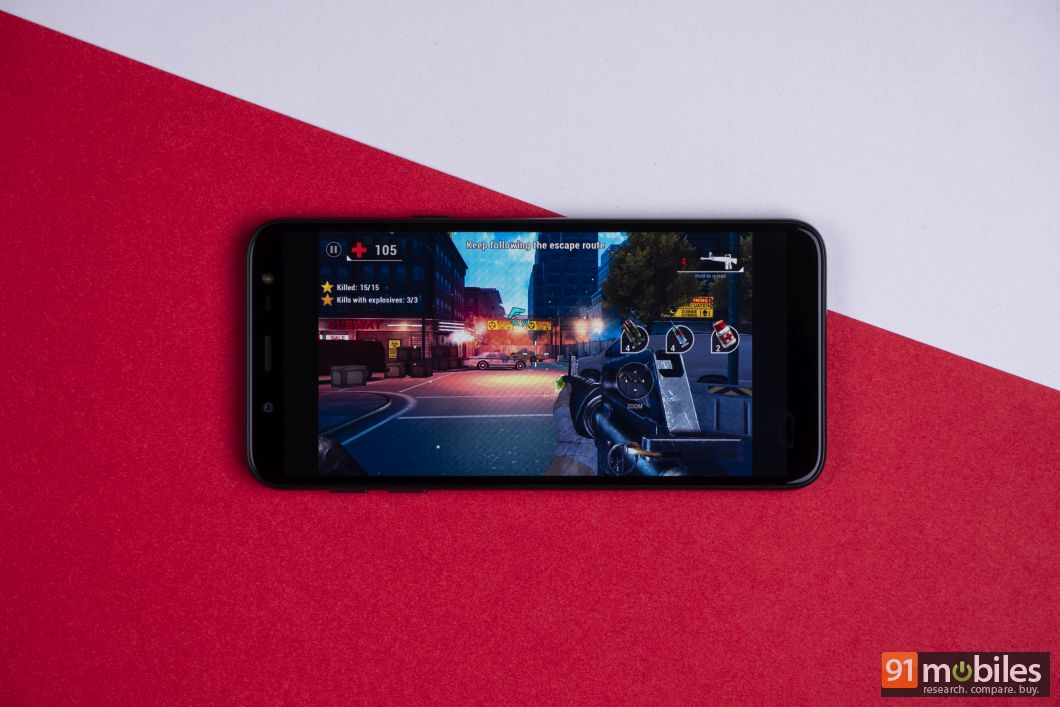 Sadly, just like most Samsung phones, the Galaxy J6 sometimes shows noticeable lag even while navigating the menu or scrolling apps in the overview screen. And as usual, we’d blame the software for that. The handset ships with the company’s proprietary skin dubbed Samsung Experience 9.0 which runs atop Android 8.1 Oreo. While it doesn’t have much bloatware, the UI has heavy animations and isn’t optimised well, which takes a toll on the hardware. Talking about features, along with the usual options, Chat over Video is quite useful. As the name suggests, it overlays apps like Messenger, WhatsApp, etc. over the video you’re watching to ensure that you can reply without exiting the movie or TV series. The device also comes with Samsung Pay Mini, which lets you make UPI payments and is also integrated with Paytm, though it’s not as useful as the full-fledged Samsung Pay app which lets you use the phone at POS terminals.

Samsung has equipped the Galaxy J6 with the face unlock feature as well, but we’d urge you to avoid it all costs. It barely works, no matter how many angles or different lighting conditions you try. Thankfully, there’s a fingerprint sensor at the rear, which works as advertised and unlocks the phone instantaneously. However, it’s surface area is quite small, which might take some getting used to.

In the imaging department, the Samsung Galaxy J6 rocks a 13-megapixel shooter at the rear and an 8MP snapper up front. Both sensors come with an aperture of f/1.9 allowing more light to enter. In terms of the interface, the camera app is choc-a-block with options. In the portrait mode, you’ll find the shutter button, video recording key, and the shortcut to access the gallery to preview the shots. Above that, you’ll find the settings menu, the ability to click images in the 18.5:9 aspect ratio, flash toggle, colour effects and the option to switch to the front camera. Up top, the viewfinder lets you switch to different modes such as pro, panorama, continuous shot, etc. It must be noted that the pro mode only lets you adjust the ISO level, exposure and white balance, and not other parameters like shutter speed.

Quality-wise, the snapper is able to capture good shots in well-lit conditions. The images offer vibrant colours, and the details also seem to be fine for today’s social media age. But if you view the images in full resolution, then there’s noticeable amount of grain visible. The HDR mode is really effective however, and makes the scene more pleasing to the eyes. While there’ are no dual cameras or software-based bokeh, the phone is able to offer a decent level of blur effect while capturing close-up shots. The quality of images taken in low light deteriorates even further with a significant amount of noise creeping in. Enabling the Night mode doesn’t help the situation either. Selfies taken from the 8MP front shooter fare relatively better, though the skin tones in the images seem to be quite soft. As far as videos are concerned, the phone can capture them at 1080p resolution at 30fps. Here’s a look at the images captured by the Samsung Galaxy J6.

On the storage side of things, the smartphone comes with 32GB or 64GB memory onboard, which can be extended further up to 256GB with the use of a microSD card. Additionally, the handset offers a dedicated storage expansion slot, which means you don’t need to compromise on the dual-SIM functionality to expand the storage.

Fuelling the Samsung Galaxy J6 is a 3,000mAh battery, which manages to impress in terms of the usage time it offers on a single charge. With regular usage, the device easily manages to last more than a day of use. This reflects in our battery test as well, wherein we played a HD video on loop with both brightness and volume levels set at 50 percent and only cellular connectivity turned on, with the handset lasting almost 17 hours and 30 minutes. On the negative side, the phone doesn’t support fast charging, and takes over two and a half hours to charge fully with the bundled adapter.

At face value, the Samsung Galaxy J6 aims to offer everything a prospective buyer is looking for under Rs 15,000, be it the modern 18:9 display, good internals, Android 8.0 Oreo and a reliable battery life. The cameras sour the deal however, considering we’re seeing more and more dual camera-toting offerings in this segment and selfie shooters also have a higher resolution. 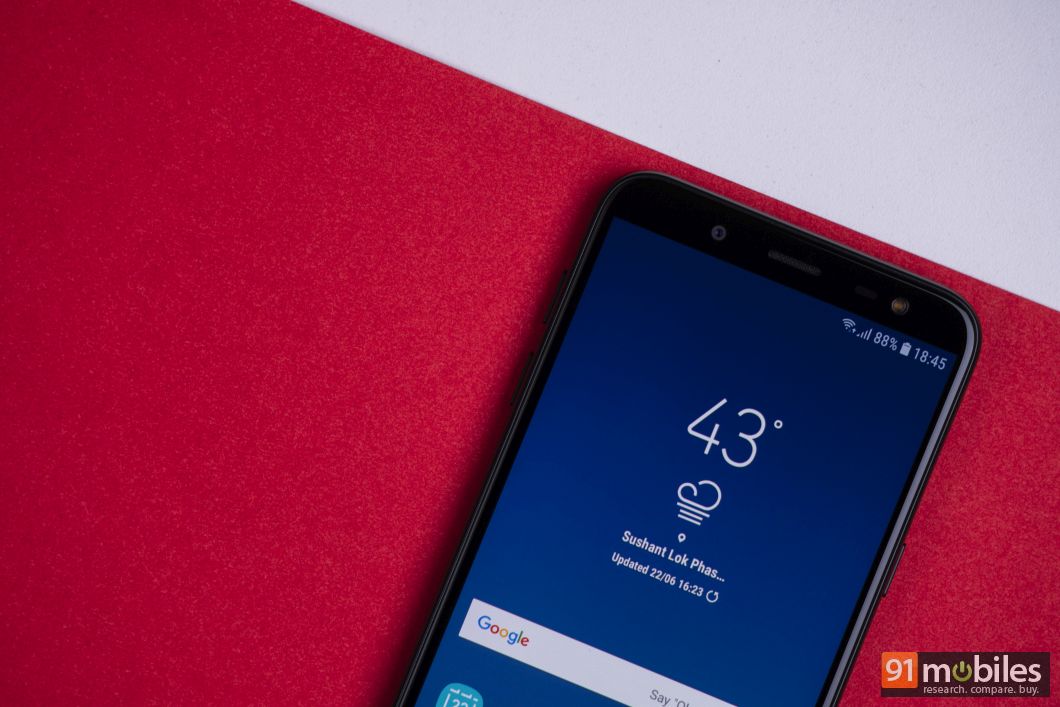 However, as has been the case with the brand’s offerings in this category, the competition offers each of these things and then some more. Xiaomi’s Redmi Note 5 Pro (review) for instance, offers a full HD display, powerful hardware, dual rear cameras, a high-res front shooter and a beefy battery. The ASUS ZenFone Max Pro M1 (review) also brings forth similar specs as the Redmi Note 5 Pro, while OPPO’s online-exclusive sub-brand’s debut device, the RealMe 1 (review) is also an attractive option, especially for its asking price. The Moto G6 (review) also comes across as a better buy with its stunning design, full HD+ display and a pair of shooters at the back.

Overall, the Galaxy J6 comes across as a good effort that can make a standing in the sub-Rs 15k segment, but the competition just seems stronger.