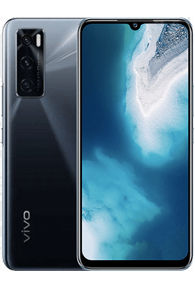 Vivo recently announced another addition to its ever-expanding portfolio of mid-range offerings in the form of the Vivo V20 SE. Currently priced at Rs 20,999, the V20 SE goes up against the likes of the Realme 7 Pro (review) and the Galaxy M31s (review). Vivo already has the V20 (review) in its kitty, an upper mid-range smartphone that I recently tried out as well. In the V20 SE, the smartphone maker has kept quite a few features from its sibling and trimmed a few to offer a lower price tag. Armed with a high-res camera setup and one of the nicer displays in the segment, the V20 SE appears to be a capable daily driver. However, the choice of chipset throws some shade on the entire ensemble. In this review of the Vivo V20 SE, I will explore the various features, specs and capabilities of the device to see if it’s a hit or a miss. 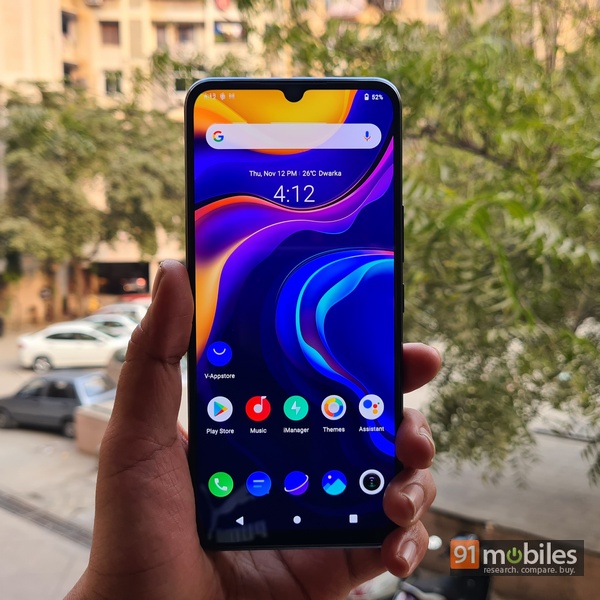 The Vivo V20 had a spunky Sunset Jazz colour scheme which was extremely easy on the eye. On the SE, Vivo has used a more natural approach, opting for a glossy dual-tone shift instead of the matte glass finish. The result is a surface that can get scratched easily and collect a ton of smudges. However, like all OEMs in this price segment, Vivo has provided a clear, silicone case that should help save some of the shine on the device. The camera hump protrudes from the back and houses a triple-lens setup along with a dual-LED flash module. The overall weight of the V20 SE is considerably on the lighter side and the sloping edges help slide the device easily in my palm. Like the V20, the SE also packs in its internals inside a remarkably thin body which measures about 7.83mm in thickness. From the button placement to the narrow design to the shimmering colours and the sizeable camera hump, the Vivo V20 SE has been made to impress. In this segment, the V20 SE is a device that offers a great in-hand feel, right along with the Realme 7 Pro. 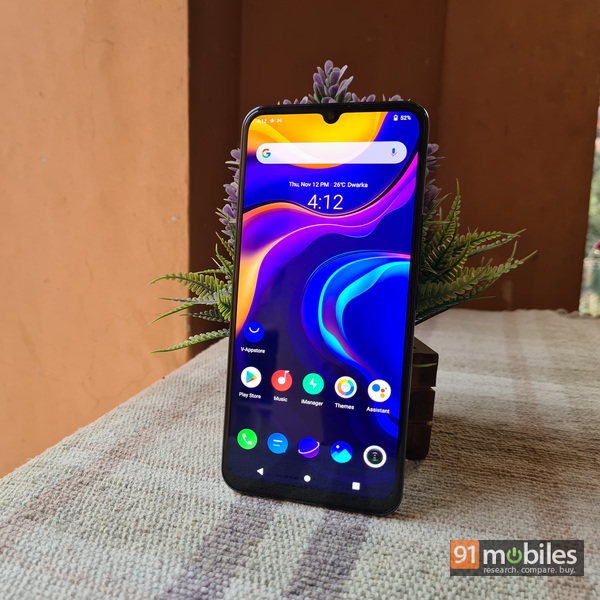 It is becoming increasingly common to see mid-rangers sporting AMOLED panels, and the Vivo V20 SE follows the trend. I had appreciated the Vivo V20’s panel for its vividness and balanced contrast ratios even if the refresh rate was locked at 60Hz. The fact that Vivo has brought the exact same display on its lower-priced device makes me believe that the company is not compromising on the viewing experience at least. Even though the waterdrop notch, a screen element nearly out of fashion, is still present, it hardly interferes with the otherwise bezel-less panel. Brightness levels are optimum but I did have slight difficulty when sunlight shone directly on the screen, something I could not say for the regular V20. The size is the same at 6.44-inches, as is the FHD+ resolution, along with the 20:9 aspect ratio. Accordingly, all display modification features such as colour temperature and saturation settings along with the usual blue light filter toggle are present. Vivo seems to be slowly gaining a reputation for offering capable displays in different price segments and it’s easy to see why with the V20 SE. 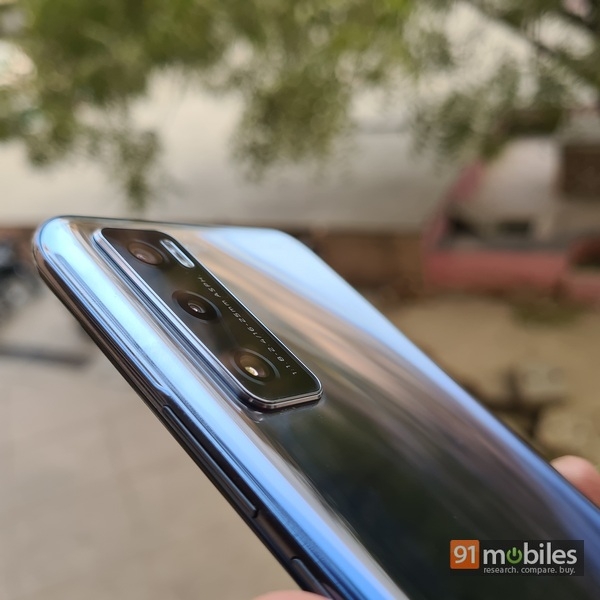 On the optics side as well, the Vivo V20 SE takes some of the attributes from the original V20. Instead of the main 64MP GW1 ISOCELL snapper, the V20 SE has a 48MP primary shooter which is supported by the 8MP ultra-wide and a 2MP macro shooter. The selfies are handled by the capable 32MP front-facing camera. In daylight scenarios, you can expect the usual arary of lovely photos with ample colours, accurate HDR and a hint of the Vivo-branded saturation levels. Consequently, anywhere you point your camera in the morning or afternoon, you are getting the best which Vivo can offer in the mid-range. People can shift towards Samsung’s, Realme’s or Vivo’s colour science in photos, but all results should be pleasing. The ultra-wide lens does get the colour temperature wrong sometimes, which gives a false impression of the lighting, but details are strikingly sharp. The macro shooter can get up close with a 2.5cm focus distance but colour quality is quite skewed and it requires an incredibly stable subject. Low-light photography without the dedicated night mode is a flop. The camera fails to detect the lack of light in a shot and doesn’t adjust the exposure accordingly. However, with the Night Mode, the shots are decidedly more focused and pack in a lot more details while balancing the exposure. 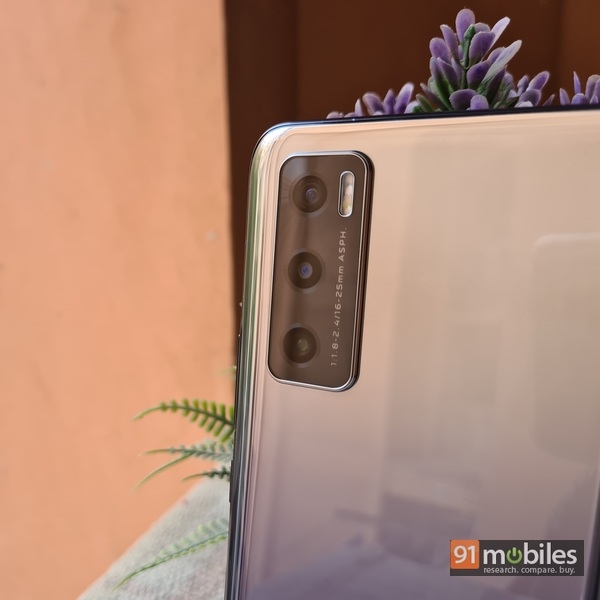 The SE’s 32MP front camera may lack a couple of features that the V20’s 44MP camera had, but you will still be getting excellent selfies. The Vivo facial smoothening and lighter skin tones are perhaps the only viable complaints I can have. Details, exposure and colour accuracy were on point, verging on really good. Portrait mode is decent with edge detection missing out on a few occasions. The camera experience on the V20 SE is nothing out of the ordinary but it is definitely on par with what the other OEMs are offering. A rather meek Qualcomm Snapdragon 665 SoC is present on the V20 SE. You can understand my concern when the likes of Realme and POCO, at lower price points, are offering newer 700-series chipsets. The regular V20 packed in the Snapdragon 720G, which isn’t really the best for its price and the SE is also going down the same path. While I don’t stress too much on benchmark scores, the V20 SE trails behind in both CPU and GPU tests, indicating it’s not meant for performance-heavy usage. That being said, like almost any other phone in the Rs 20,000 range, moderate to low-intensity tasks can be done efficiently. Just don’t go around playing Call of Duty Mobile or any such heavy graphics intensive titles. At least Vivo lets you have a healthy 8GB of RAM paired with 128GB of expandable storage. 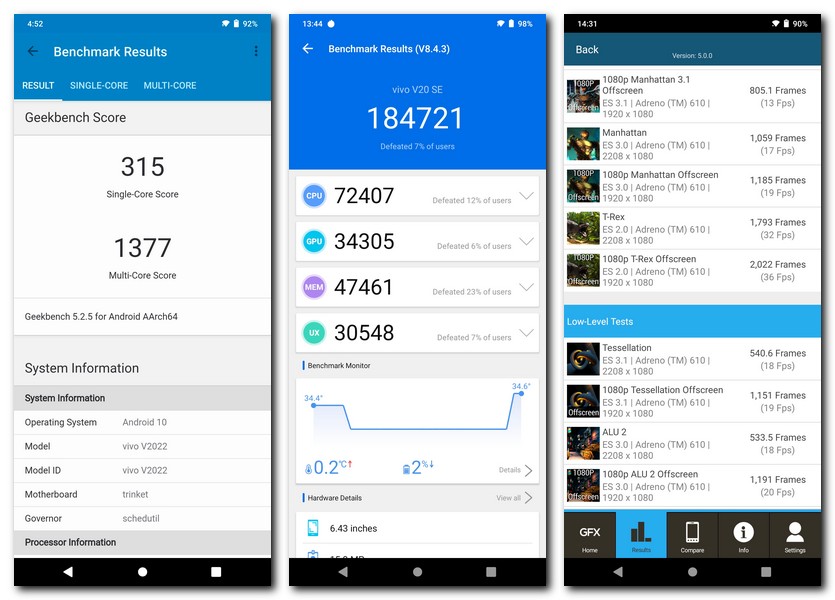 The V20 SE also has one of the fastest in-display fingerprint authentication speeds I have seen on any smartphone. It is also extremely accurate, unlike the Realme 7 Pro. On the software side of things, you can head over to my Vivo V20 review to see how well the proprietary FunTouchOS 11 functions. On a side note, I’m quite happy that the phone comes with the latest Android 11 which is currently very rare in the mid-range market. Call, microphone, speaker and earpiece quality, as expected, was nothing to complain about. 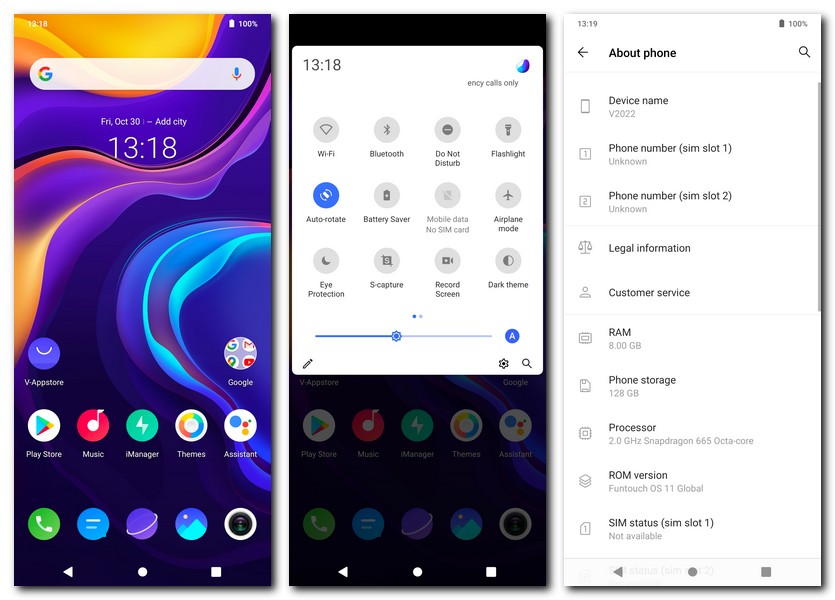 Battery life on the V20 SE isn’t really impressive, thanks to its 4,100mAh capacity. Even so, Vivo has done well by providing a substantially fast 33W charging solution to back up its battery. The slightly smaller capacity combined with the fast charging speed means that the V20 SE can juice up completely in about an hour. While I won’t go so far as to call the device a day and a half device, moderate usage provides a screen on time of about 5 hours. However, my standard battery test of looping a video for on half brightness and volume yielded a below-average score of 18 hours. 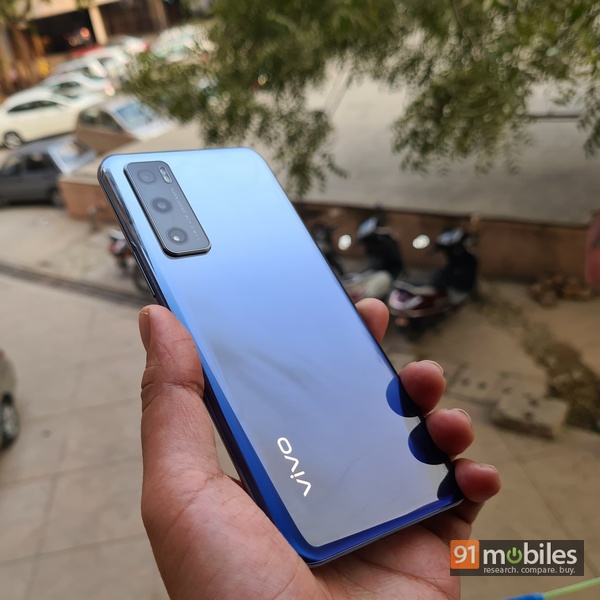 Shave off a couple of features from the V20, include a lower-powered chipset, drop the price by about a quarter and you have yourself the V20 SE. Not unlike the recently unveiled Galaxy S20 FE (review), the V20 SE also keeps most of the worthwhile capabilities of its older sibling. Gaming isn’t a strong suit of the V20 SE, and battery life seems a bit lacking as well. Both of these are some of Realme 7 Pro’s strong points. Also, the displays on both phones are top-notch but lack high refresh rates, something that the POCO X3 (review) will be quick to pounce upon. The fact of the matter is that the Vivo V20 SE does not master a single area of smartphone usage but it does give stiff competition in most aspects. The Vivo V20 SE looks good, takes great photos and has a stellar AMOLED panel. If those are the things that interest you, then go ahead with the V20 SE. Otherwise, there are quite a few good options available from Realme, Xiaomi and POCO. 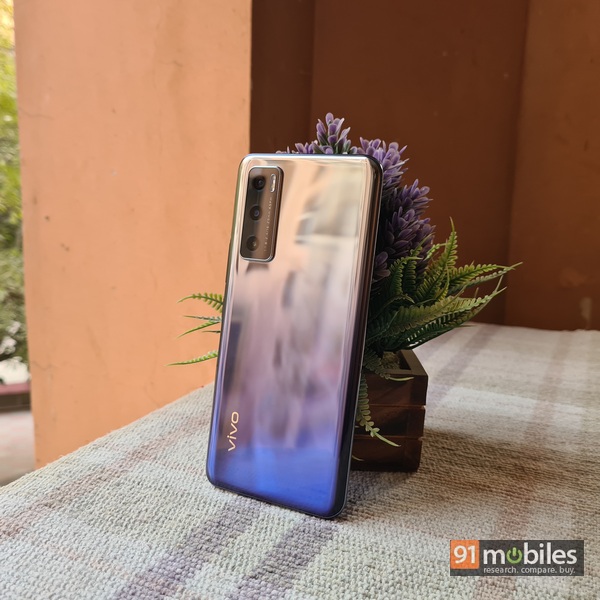