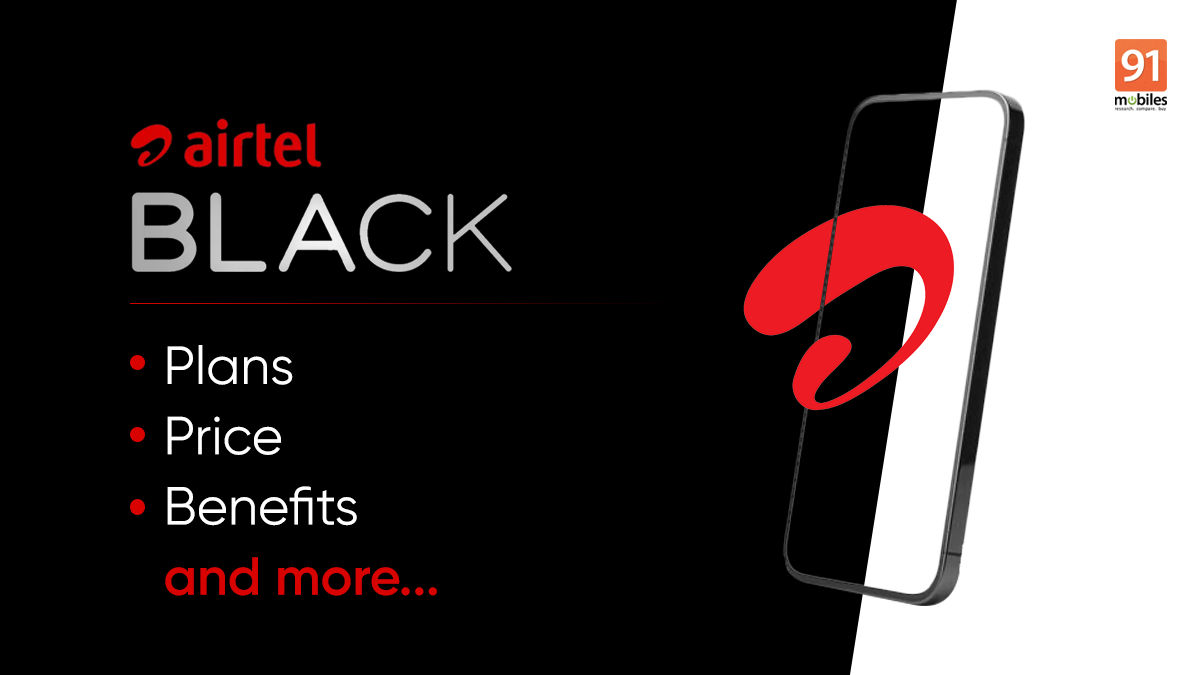 Airtel Black is a combo service for mobile, TV, internet, and OTT platforms. The service comes bundled with Airtel’s postpaid, DTH, Xstream Fiber broadband, and subscription to a number of streaming platforms including Netflix, Disney Plus Hotstar, and more. They are all clubbed under one roof and managed from a single account. What’s more, you can add your family members to Airtel Black and forget about paying bills separately. The combo service is available in most regions across the country, with Airtel Black plans starting at just Rs 699. While there are several Airtel Black plans to choose from, users can also custom-curate a plan based on their requirements.

Read on to find out all the Airtel Black combo plans for postpaid, DTH, and broadband services along with an easy step-by-step guide on how to custom-create an Airtel Black plan.

Below is a list of fixed Airtel Black plans, which are currently available only in a few select cities and towns. These plans are exclusive GST and come bundled with two or more services for maximum value and savings. 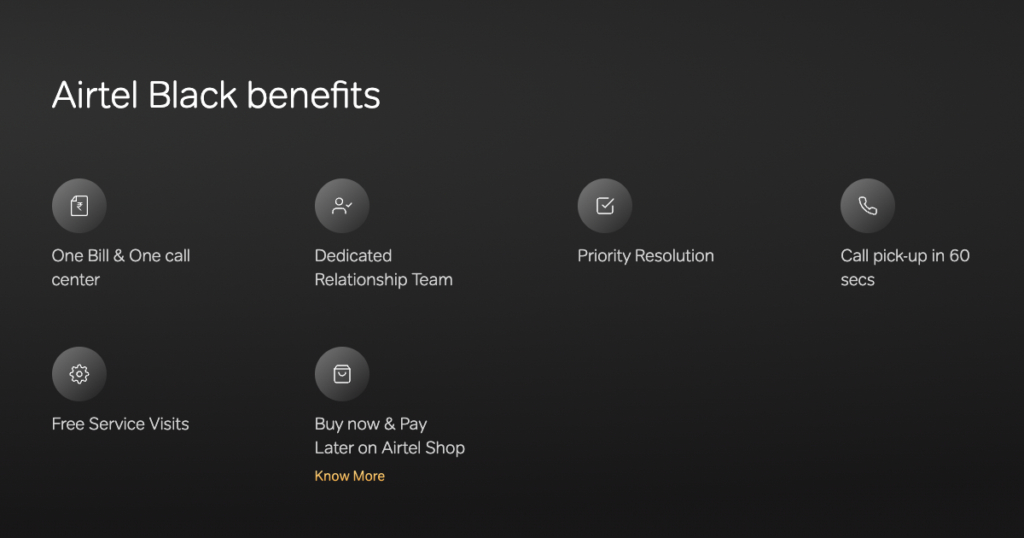 The most basic Airtel Black plan starts at Rs 699 and offers a broadband fiber connection of upto unlimited 40 Mbps speeds. Along with that, subscribers of the plan also get a landline as well as a DTH connection which includes TV channels worth Rs 300. The plan is also bundled with several OTT benefits, such as Disney+ Hotstar and Airtel XStream app. The latter includes access to Sony LIV, Lionsgate Play, Eros Now and many regional-based platforms.

Unlike the basic Airtel Black plan, the Rs 899 plan doesn’t offer any broadband benefits. Users opting for the plan get 2 postpaid SIM connections with 105GB of data and unlimited local and STD calling facilities. There’s also a DTH set-top box connection bundled with this plan that provides TV channels worth Rs 350 per month. Lastly, users also get access to a host of streaming platforms such as Amazon Prime Video, Disney Plus Hotstar and even the Airtel XStream app, which further includes additional streaming services.

The Rs 1,098 Airtel Black plan gets you a fiber-based Wi-Fi connection with upto unlimited 100Mbps speeds as well as unlimited calling through landline. Other perks include 75 GB of data for a single postpaid Airtel SIM along with unlimited calling to any operator in India. Lastly, just like other plans, this plan also comes with various OTT subscriptions like Amazon Prime, Disney Plus Hotstar, and Airtel XStream.

By just adding Rs 1 more to the Rs 1098 plan, customers can get the Rs 1,099 Airtel Black plan, which bumps up the fiber broadband speeds to 200 Mbps while retaining unlimited landline calling facility. Instead of the postpaid connection, you get a DTH connection with this Airtel Black combo plan that offers TV channels worth Rs 350. OTT benefits remain the same too such as Amazon Prime, Disney Plus Hotstar and Airtel XStream.

The Rs 1,599 Airtel Black plan offers super-fast speeds of 300 Mbps with a broadband connection as well as the provision for unlimited calling through landline. There’s also a DTH within this combo plan that can broadcast TV channels worth Rs 350. As for the complimentary OTT benefits, there’s Netflix, Amazon Prime Video, Disney Plus Hotstar and Airtel XStream app which in itself contains additional streaming platforms.

The top-of-the-line Rs 2,299 Airtel Black plan brings literally everything to the table. The combo plan constitutes a fiber connection with upto 300 Mbps speeds, unlimited calls via landline, and provision to add a total of four postpaid connections under one roof with a 240 GB internet quota. There’s unlimited local and STD calling too. Apart from that, users also get a DTH connection within this plan which includes pre-loaded channels worth Rs 350. Entertainment lovers can enjoy access to an array of OTT content from Netflix, Disney Plus Hotstar, Amazon Prime Video and Airtel XStream.

How to create a custom Airtel Black plan 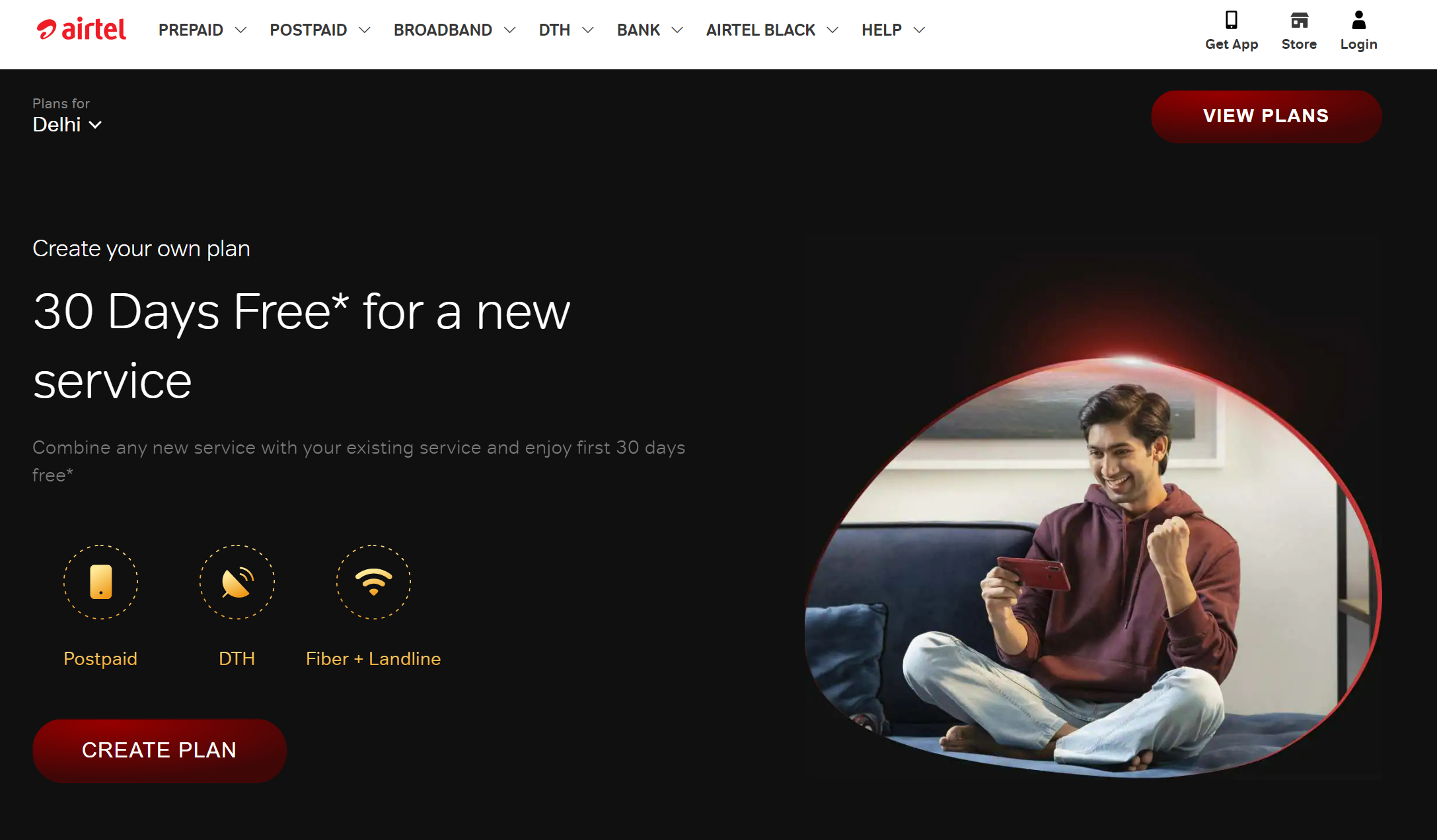 In addition to the combo postpaid, broadband, and DTH plans, Airtel Black users are entitled to several other exclusive benefits. These are as follows.

Call pick-up in 60 seconds – Airtel Black users don’t need to wait in IVR queues to contact Airtel customer care for resolutions. Their calls will be attended to within 60 seconds.

Free service visits – Another perk of the Airtel Black program is free-of-cost house visits by an agent to solve any hardware or connection-related faults.

Pay later – The payment for purchases made on Airtel Shop can be paid later with the Airtel Black bill at the end of every cycle.

Which OTT platforms are included in the Airtel Black plan? 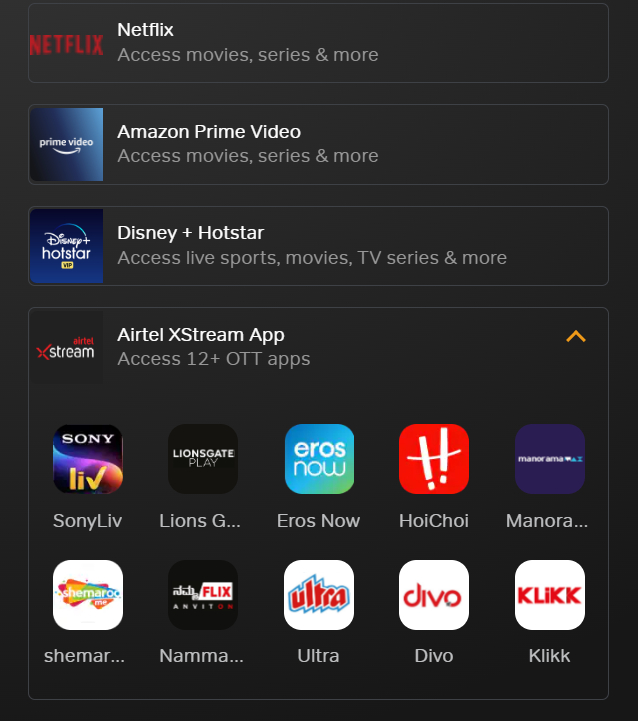 Although a couple of low-end Airtel Black plans come with just Disney Plus Hotstar and Airtel Xtream, the higher-priced plans, along with Hotstar offer Amazon Prime Video and Netflix. Irrespective of the plan you opt for, the XStream app itself constitutes 10 additional OTT services such as Sony LIV, Lionsgate Play, Eros Now, HoiChoi, manoramaMAX, shemaroo, Nammaflix, Divo, Klikk, and Ultra India.

Are Airtel prepaid users eligible for the Airtel Black plans?

Unfortunately, Airtel prepaid users are not eligible for Airtel Black plans. Prepaid subscribers willing to get Airtel Black benefits will need to upgrade to a postpaid connection.

How to add accounts and services under an Airtel Black plan?

In order to add accounts and services such as a postpaid number, XStream Fiber, Airtel DTH to an Airtel Black plan, users can log in to Airtel’s website or the Airtel Thanks App to make any changes to their ongoing plan.

Are there any installation charges with Airtel Black plan?

Yes, there are. But, if you pay a sum of Rs 4,000 in advance, your Airtel DTH and Xstream broadband installation will be done free of cost and the amount you paid will be adjusted in the recurring bills. The scheme is applicable to all Airtel Black plans.