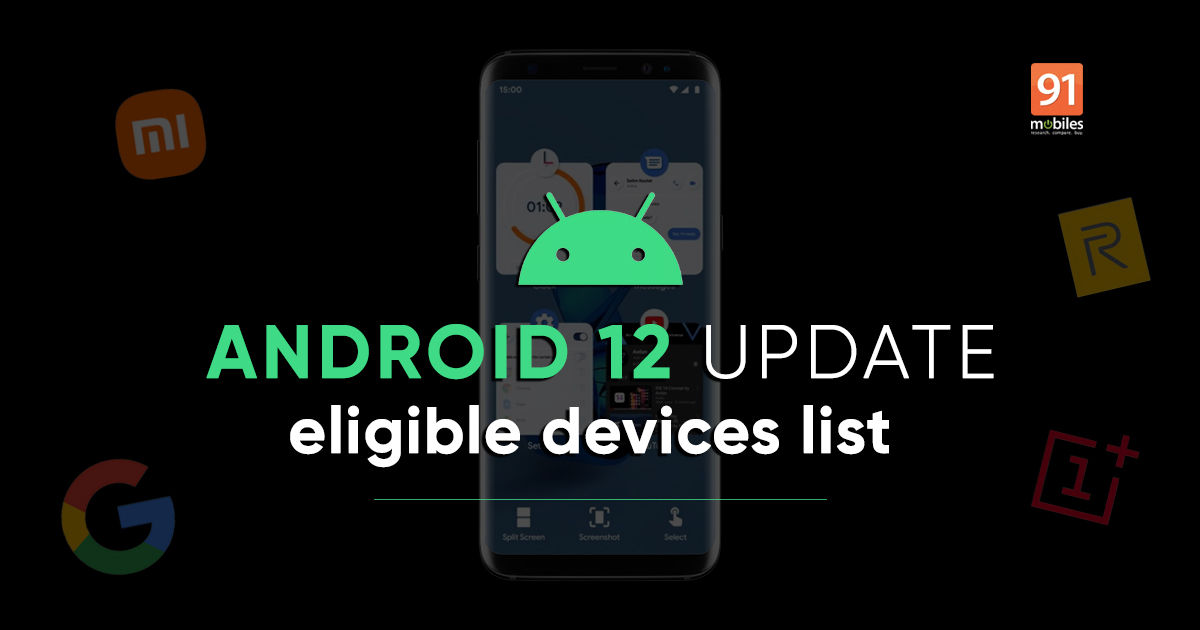 Android 12 update has started rolling for general users. Google has announced the stable Android 12 update and smartphone OEMs will begin rolling out the latest Android iteration to compatible phones in the coming months. Google has also rolled out Android 12 for its own Pixel phones. The search giant has already published the new Android version for Android Open Source Project, which allows phone makers to use the underlying code and create their custom Android interface. Brands like Realme, Samsung, OnePlus, and Xiaomi among others have shed light on their Android 12 update roadmap. Here’s a list of phones that will get the Android 12 update soon. This is not the final list and we will be updating it regularly.

As you might be familiar, this year Google will only offer the new Android version for Pixel 3 and later devices. Having said that, the original Pixel and Pixel 2 series will continue receiving security updates from the company. The upcoming Pixel 6 and 6 Pro are likely to be the first to come with Android 12 out of the box. Here’s a list of Pixel phones that have started receiving the new Android 12 update:

Samsung has not officially shared a list of devices getting Android 12, but folks at SamMobile have come up with expected devices from the brand. The list includes expected names like the Galaxy S10 series, the S20 lineup, and the Galaxy Note 10, Note 20 editions. There is a possibility that a slew of Samsung’s mid-range phones will also get Android 12-based One UI in the near future.

Xiaomi is covering a broad set of devices in its upgrade cycle. Android 12 will first come to the newer models like the Redmi Note 10 series, Mi 10, Mi 10T, and even the Mi 11 devices, which include the Mi 11 Ultra. At the lower end, Redmi 10 and Mi 11 Lite variants should also get the MIUI version based on the latest Android flavour in the coming months.

POCO has a small pool of devices to work with, and that should probably help its cause with faster release dates. As for the devices eligible for Android 12, you have the POCO X3 Pro, F3 GT, and the M3 Pro 5G.

OnePlus is also bringing Android 12 to its existing set of devices very soon. As you might know, the brand is now going to use ColorOS as the underlying code for its software. And these devices, starting from OnePlus 7 series, are most likely to get the new software in the coming months.

Officially, Realme has confirmed Android 12-based Realme UI is coming soon to the GT series. But that doesn’t mean other phones in its lineup won’t get it. We just don’t know when Realme will offer it, and which of the existing phones get it. For now, we know these phones are getting Android 12 soon:

OPPO and OnePlus now get the same ColorOS version, and Android 12 will be the first of the many to see the change. The list here includes a wide range of OPPO devices, starting from the A-series, and going up to the Find X lineup.

This might seem odd, but Tecno is actually serious about upgrading its phone to the latest Android version. In this case, we are talking about the Tecno Camon 17 which is now part of the Android 12 Developer Preview Program. It is likely the company will offer the version for the whole series, and maybe some other budget devices like the Pova, Spark as well.

Sony is also a contender to offer Android 12 but the company has remained silent about the phones that can expect to see the new version. Anyways, the company has few markets to cater to after its exit from countries like India in the past few years. We will update the list with eligible Sony devices when there is more information about it.

LG Mobiles is not very renowned for upgrading its phones to latest Android version. But earlier this year, the company did hint about offering Android 12 to some of its models. Rest assured, these are going to be the phones that came out in the past year or so, which makes the list fairly limited.

Vivo has to focus on upgrading not only its own devices, but also prep up Funtouch OS for iQOO smartphones in the market. Here is a look at the phones that are sure to get Android 12: