Home Auto Ather electric scooter owner challaned for not having a pollution certificate: do...
Highlights 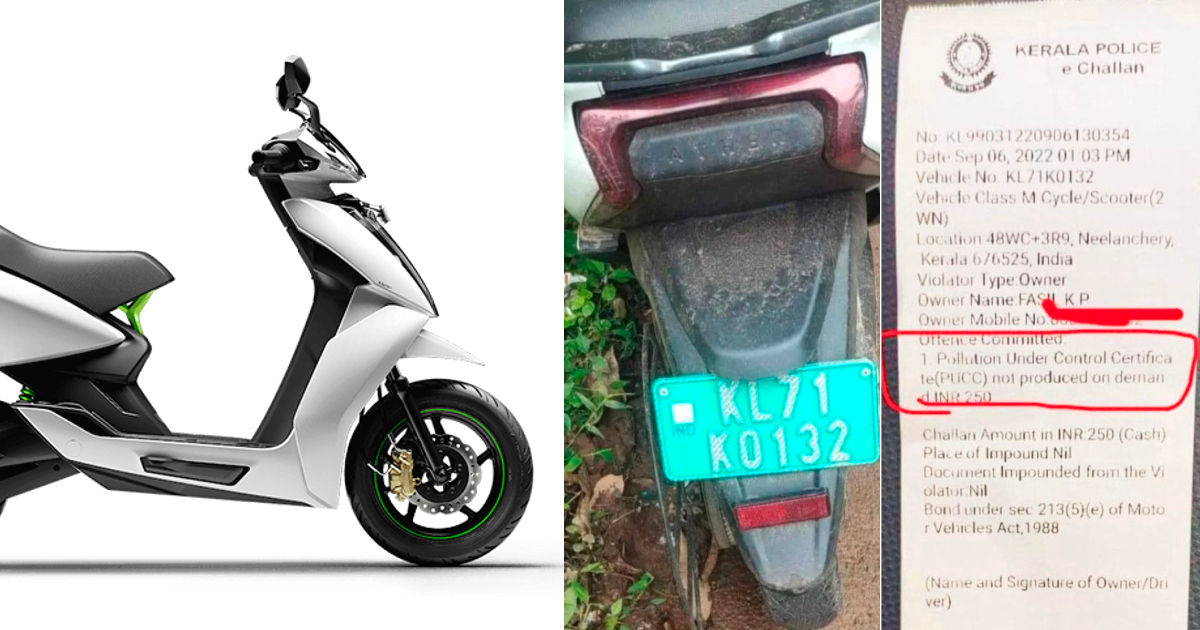 In a bizarre incident, a Kerala man was issued a traffic ticket for not possessing a Pollution under Control (PUC) certificate despite riding on an electric vehicle. The incident took people on the internet by shock as an EV owner from Kerala was issued a ticket for not producing a valid PUC certificate to the Kerala Traffic Police. The e-challan made it to social media sites after it was issued on September 6th 2022.

A Kerala man riding his Ather Energy electric scooter was intercepted by the Kerala Traffic Police and was charged with a fine of Rs 250 for failing to produce a valid Pollution under Control (PUC) certificate. Pictures of the electric scooter and the e-challan receipt later made it onto the internet and understandably took the social media audience by storm.

The e-challan was issued by the Kerala Traffic Police in the Neelanchery area, in Kerala’s Malappuram district. The fine of Rs 250 was levied on the rider under the reason, “Pollution Under Control Certificate (PUCC) not produced on demand”. The e-challan was issued to an Ather Energy e-scooter and mentions that this falls under Section 213(5)(e) of the Motor Vehicles Act, 1988.

A Twitter user later brought it to the attention of Tarun Mehta, CEO of Ather Energy, and spoke about the lack of awareness of government and government bodies at large.

Notably, PUC (Pollution Under Control) certificates are not required by EVs and only owners of vehicles emitting fumes need to produce one. EVs come under the zero-emission category, since their source of power is a battery and not fuels.