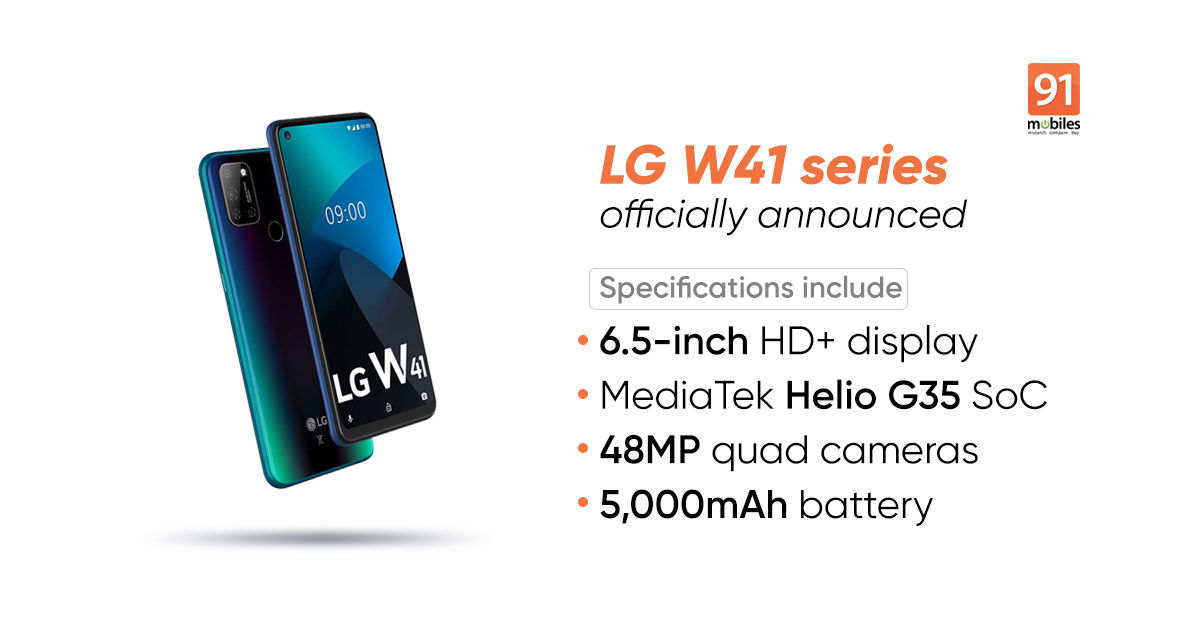 LG W41 series has been launched in India by the South Korean brand as its latest shot at the budget segment. The series comprises three smartphones, namely LG W41, W41+, and W41 Pro. While their configurations are a bit different, the thee phones’ specifications and design remain the same. All three models in the series ship with 6.5-inch HD+ punch-hole display and 48MP quad camera setup, stacked in a rectangular module, at the back. The new LG mobile phones are powered by MediaTek Helio G35 SoC and rock a 5,000mAh battery under the hood. Check out LG W41 series prices, full specifications, and sale details in India.

The LG W41 series price in India starts at Rs 13,490. However, the individual prices of the three models have not been revealed. The handsets will be available for sale on all leading platforms across the country in Magic Blue and Laser Blue colour options, but the brand has not announced a release date yet. The LG W41 comes with 4GB RAM + 64GB storage, while the LG 41+ and LG 41 Pro employ 4GB RAM + 128GB storage and 6GB RAM + 128GB storage configurations, respectively.

According to a press statement released by LG, the W41, W41+, and W41 Pro specifications will be pretty much the same except the differences in RAM/ storage. All three phones will sport a 6.5-inch HD+ Full Vision display with 20:9 aspect ratio and run on the 2.3GHz octa-core MediaTek Helio G35 SoC. The trio will have Android 10 OS out of the box and support dual SIMs with 4G connectivity. The LG W41 series is driven by a 5,000mAh battery with fast charging support via a USB Type-C port. For selfies and video calling, the smartphones pack an 8MP camera in the punch-hole setup.

The rear quad camera setup of the LG W41 lineup consists of a 48MP primary sensor, an 8MP ultra-wide sensor, a 2MP depth, and a 5MP macro sensor, with LED flash. Other features include a rear-mounted fingerprint scanner for security, a Google Assistant button, and standard connectivity options such as Bluetooth v5.0 and Wi-Fi. The smartphones measure 166.5 x 77.3 x 9.3 (mm) and weigh 201 grams.