The Moto brand continues to spread its wings under the tutelage of Lenovo. While earlier, it only had a handful of smartphones to target different segments, now it’s evident that the Chinese giant wants to bank on Moto’s brand name to cover the entire spectrum. That explains why Moto recently unveiled its most affordable smartphones ever in the form of the Moto C and C Plus (first impressions). Interestingly, with the C series, the company also started focussing on its retail efforts in India, as the Moto C is available via offline channels. However, its beefed-up sibling, the Moto C Plus is a Flipkart exclusive and brings forth some decent specs for its price tag of Rs 6,999. But will it able to take on the Xiaomi’s Redmi 4 (review), which has continued its predecessor’s popularity to dominate this price band? I’ve been using the Moto C Plus for the past week to find an answer, and here’s what I think. 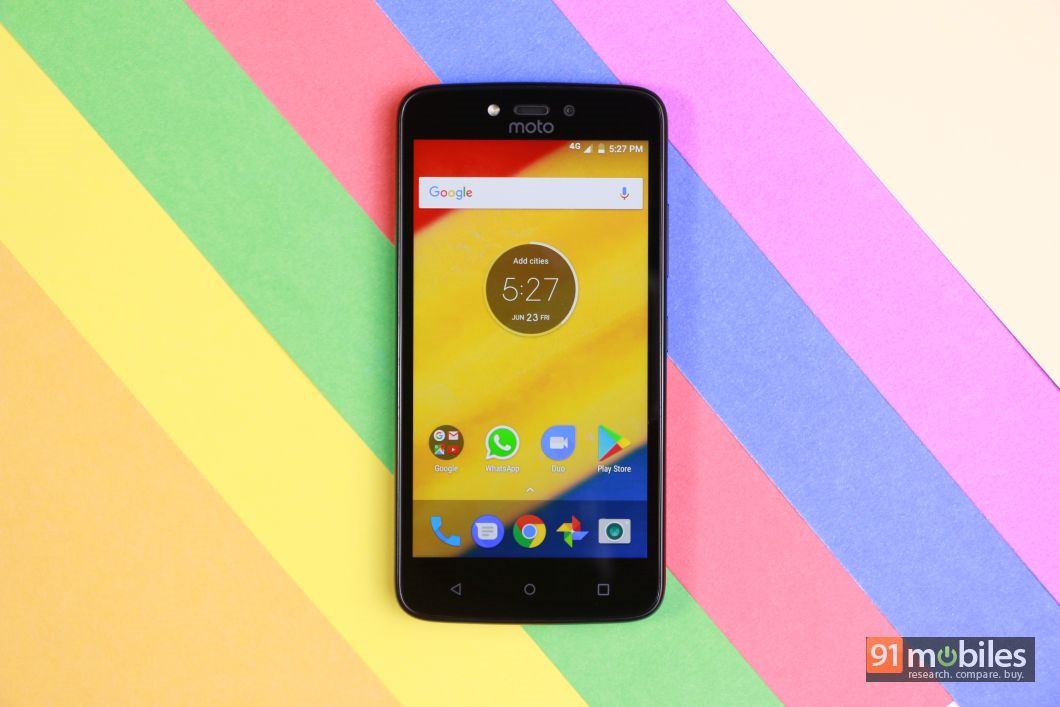 Design and display: plasticky and chunky, yet sturdy

This year, Moto has reworked the design language of its smartphones, starting with the Moto G5 Plus (review). That has resulted in different aesthetics for its offerings, and the Moto C Plus doesn’t really have many similarities with its siblings in terms of looks. While I don’t necessarily mean it in a bad way, it’s just odd to find devices from the company not bearing much resemblance to each other. The phone lacks any sort of nano-coating unlike its siblings, and hence isn’t impervious to splashes. 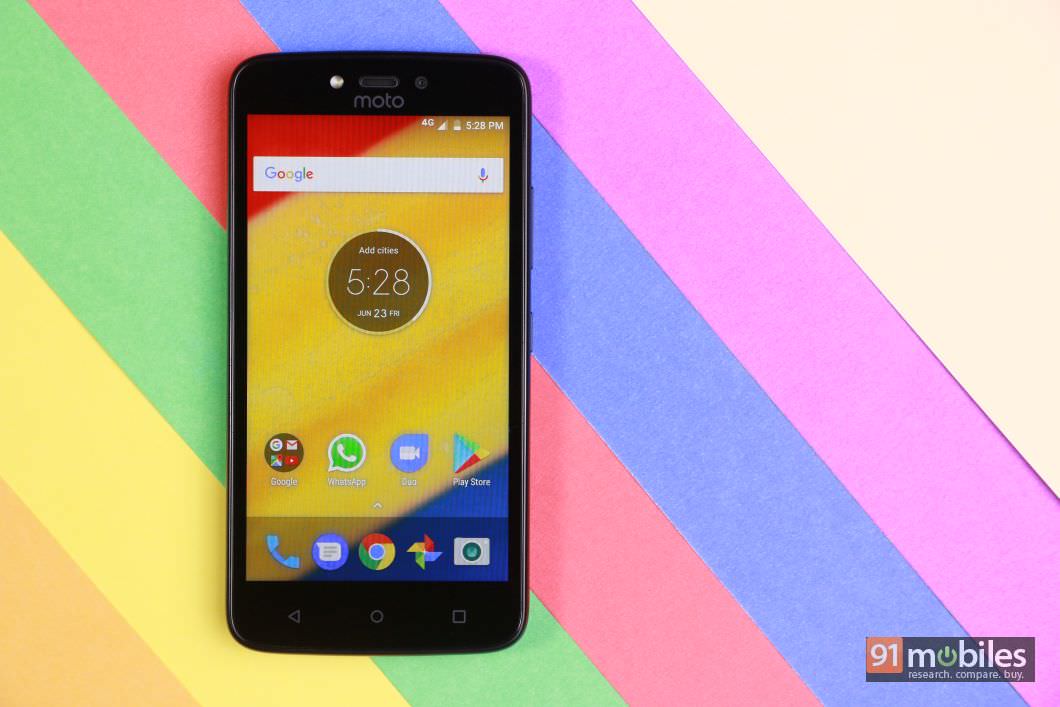 At the front, the Moto C Plus is dominated by the 5-inch display panel, which is accompanied by Moto branding, an earpiece, a secondary snapper and an LED flash above, while at the chin, you will find a row of capacitive keys. This is a stark departure from the previous launches by the brand, which either had software-based navigation keys or offered one-button navigation with a physical home button-cum-fingerprint scanner.

The volume rocker and the power switch are placed on the right edge, while both the 3.5mm audio socket and the micro-USB port are available up top. Interestingly, both the rear panel and the battery are removable… which is a rarity these days. The handset accepts dual nano-SIM cards, along with offering a dedicated microSD card slot. 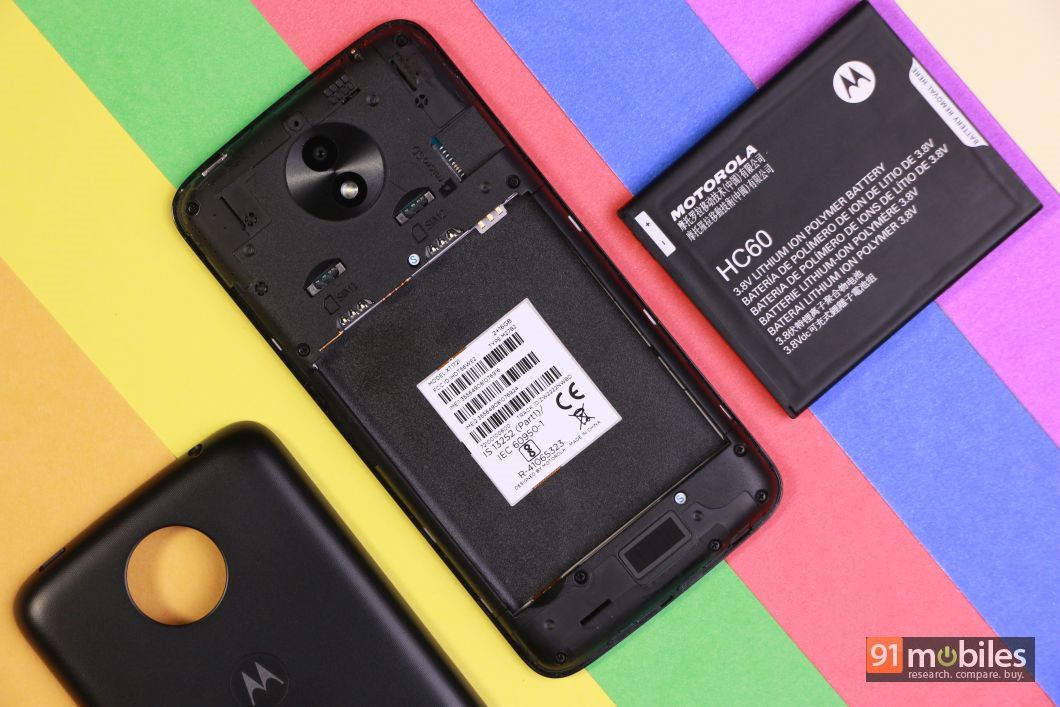 While the smartphone uses plastic for its construction, it feels quite solid to hold in the hands. But due to a large 4,000mAh cell, it does feel slightly bulky at 162g, and is considerably thick at 10mm. The textured back cover offers good grip, and ensures that the Moto C Plus doesn’t slip even when the palms are sweaty. At the rear, you’ll find the camera sensor and the LED flash placed in a circular module – which gives the phone a distinct identity. There’s the iconic M logo below it, but it doesn’t have any dimple, which is rather odd. The speaker grille is available towards the bottom, and emits loud sound – although it sounds shrill at full volumes. 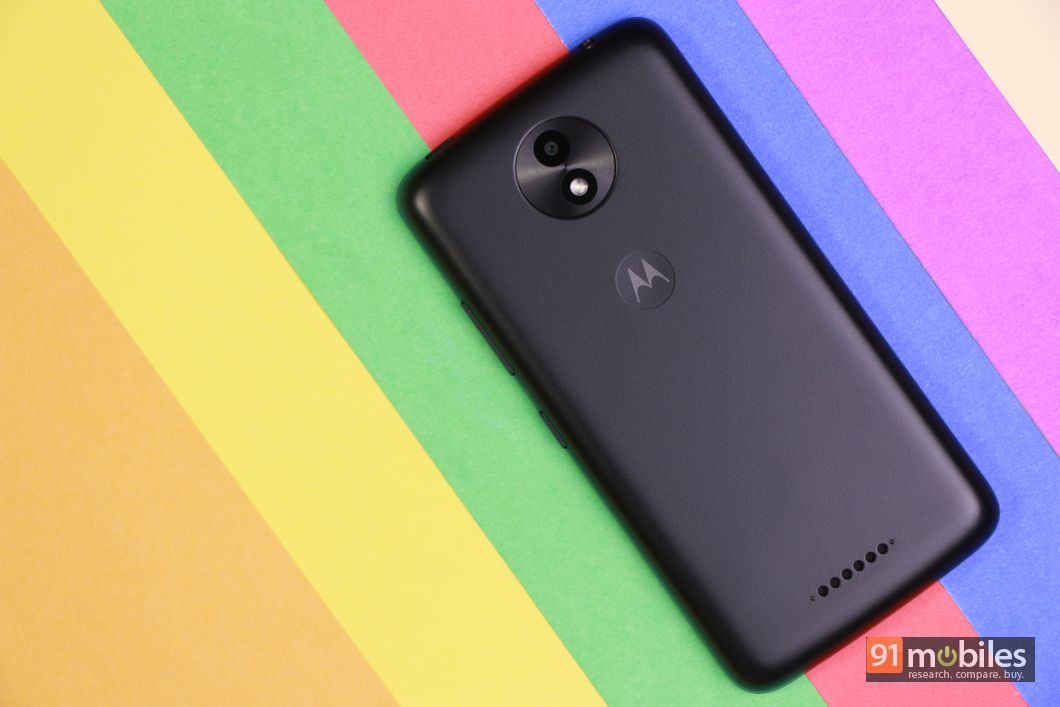 Coming to the display, the 5-inch display is par for the course in budget smartphones, with a resolution of 1,280 x 720 pixels. The TFT panel ensures good colour reproduction, and is crisp too. While the brightness levels are mostly fine – even though the screen is quite reflective under harsh sunlight – you’ll need to adjust it yourself, since the Moto C Plus skips an ambient light sensor. The phone also misses out on a Gorilla Glass layer for protecting the display. 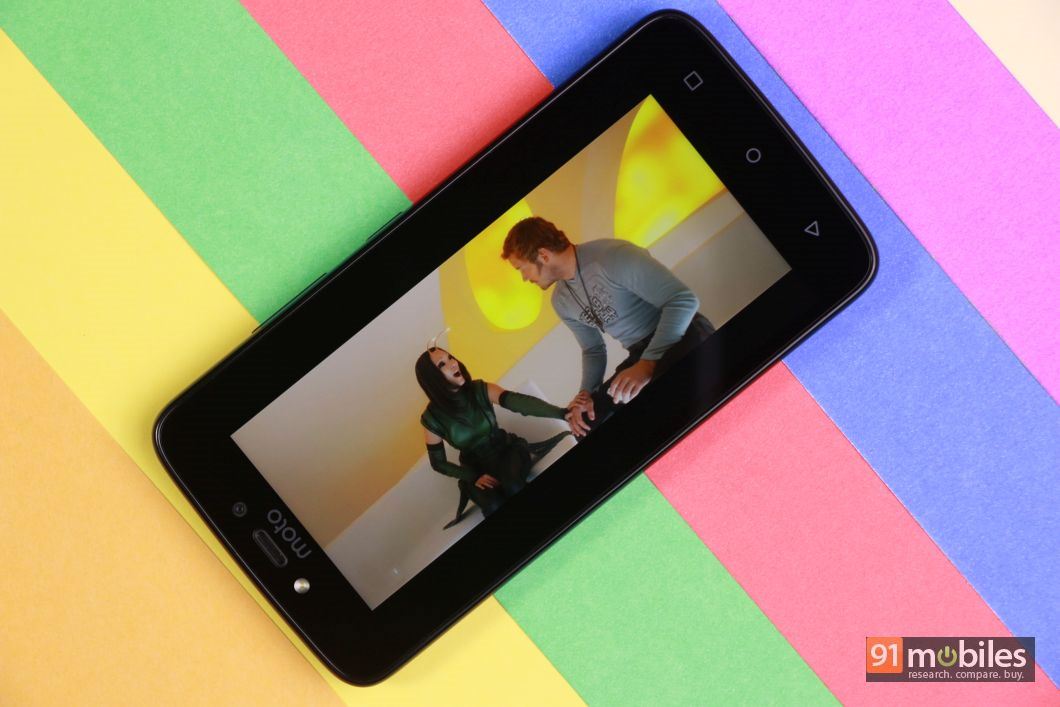 In the camera department, the Moto C Plus sports an 8-megapixel snapper at the back, and a 2MP selfie camera. While the setup is basic, it’s interesting that the device features an LED flash at the front too. The primary camera is able to capture videos at 720p resolution. The camera app is quite minimal and similar to other Moto smartphones. You can touch to focus and change exposure, along with getting the ability to toggle the flash, HDR, enable the self-timer and switch to the front camera. You also get a beautify mode for the back as well as the front camera. 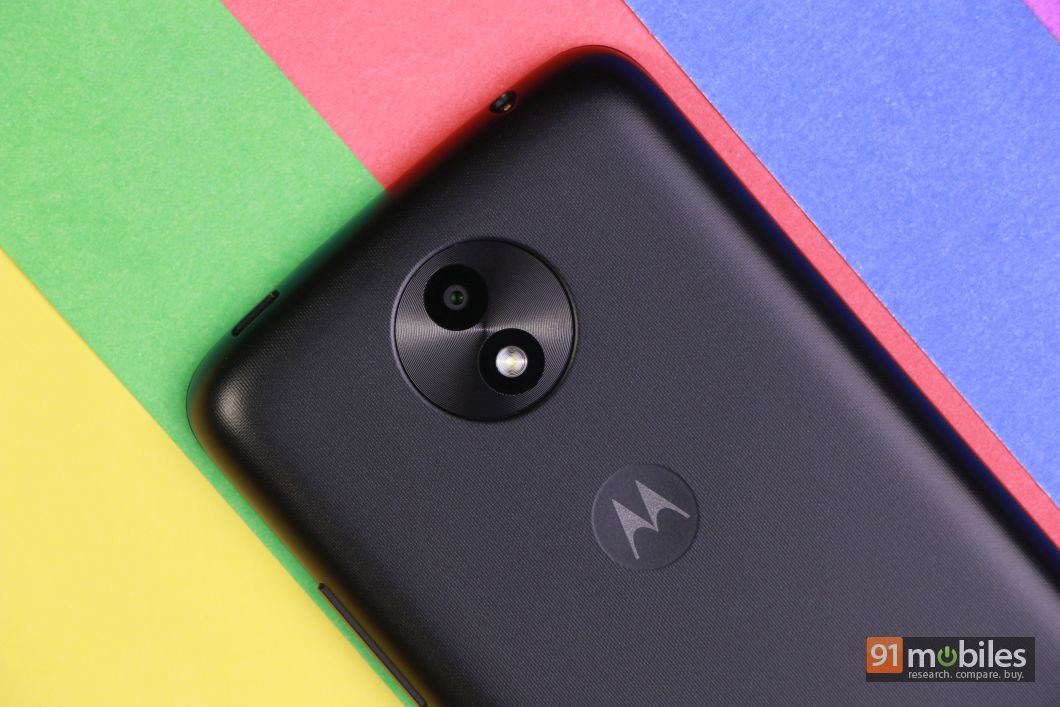 The camera isn’t the fastest in terms of focussing or shooting. Quality-wise, the phone delivers decent images. In daylight conditions, images are quite sharp and colours are also accurate. I also like the HDR mode, which despite taking a bit of time to process, shoots pleasing images. But in close-up shots, the phone does struggle a bit in focussing, and low-light images are barely usable. Thankfully, the LED flash helps in illuminating the scene well. If you’re a selfie lover, then I’d suggest staying away from the Moto C Plus as its 2MP camera isn’t suited for sharing self-portraits on social media. The addition of a front flash is interesting though, as this feature isn’t usually present in this segment. Here are a few images taken from the C Plus’ primary camera.

Moto C Plus camera samples
1 of 7

While Motorola usually relies on Qualcomm processors, under Lenovo, it has started to opt for MediaTek chipsets as well. The same is the case with the Moto C Plus. The phone comes fuelled by the MTK 6737 SoC, which offers four cores running at 1.3GHz. Coupled with 2GB of RAM, the handset is quite capable of handling day-to-day tasks with ease. While it does take noticeable time while opening apps or switching between tasks, it manages to offer a smooth experience otherwise. 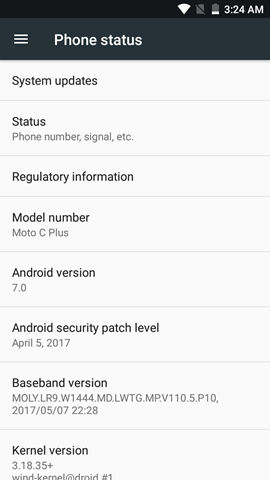 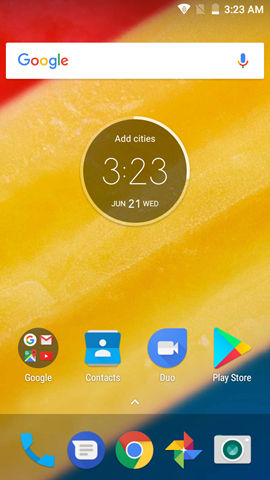 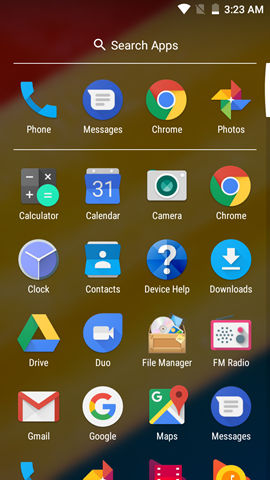 A part of the reason for that is Moto’s promise of offering latest Android iteration, that too, without any bloatware or custom skins. In fact, the Nougat build on the C Plus is more vanilla than its siblings, since the device doesn’t come with any Moto enhancements. Sadly, this means no double twist to open the camera or double chop to enable the flashlight. This is perhaps because of the limitation of the MediaTek chipset under the hood, since I noticed the same thing on the Moto M (review) too, which drew power from the Helio P15 CPU. That said, it’s worth applauding Moto for offering the newest build of Android, as most phones in its range ship with the older Marshmallow OS. You also get the Google Assistant, which can be brought to life by long-pressing the home button. 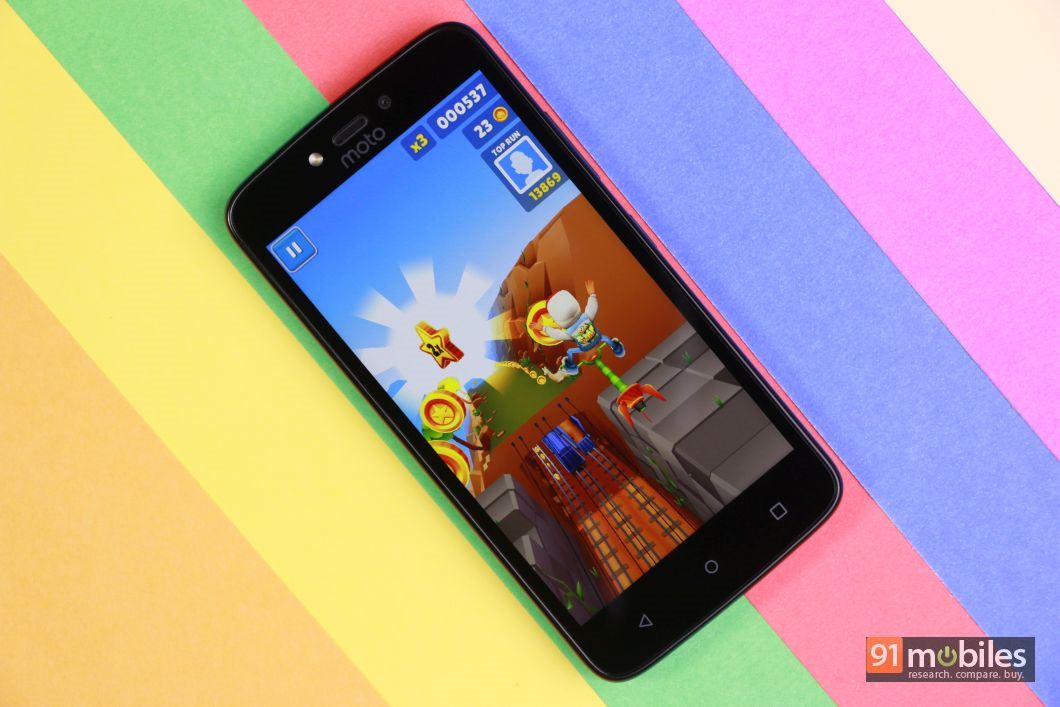 Talking about the gaming experience, the device was able to run casual titles like Subway Surfers quite well. Even games such as Asphalt Nitro worked fine. However, the hardware is certainly not equipped enough to playing heavier games like Need for Speed Most Wanted. The C Plus also heats up within 15 to 20 minutes of gaming or strenuous usage.

The 16GB memory onboard offers a little over 12.5GB to the end user. As mentioned above, you get a dedicated microSD card slot to top it up further up to 32GB. 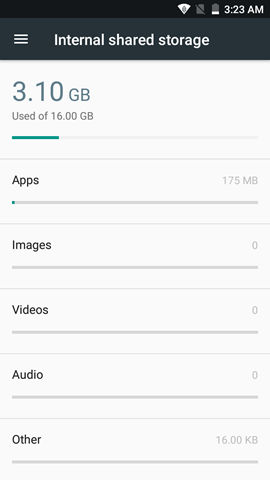 Keeping the Moto C Plus running is a beefy 4,000mAh battery, and it does its job well. Even for a power user like me, the phone easily lasted the entire working day with the usage comprising streaming songs via Wynk Music for an hour, using GPS for navigation intermittently, a few calls and messages, with the 4G turned on the entire time. With the moderate usage, the handset can comfortably go on until the next day.

I usually got around 4 hours of screen-on time, which is pretty good. In our battery loop test, wherein we playback an HD video with both the brightness and volume at 50 percent, and everything else turned off, except the cellular connectivity, the C Plus lasted around 14 hours and 30 minutes – which is quite impressive. 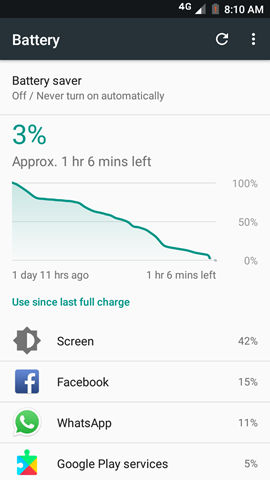 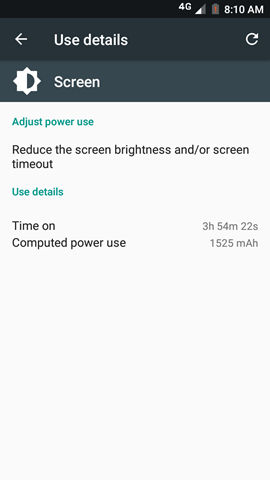 The Moto C Plus also supports Rapid Charging, but sadly, the device doesn’t come bundled with the compatible adapter. The charger takes almost three and a half hours to juice up the smartphone fully. I got similar results when I used my own 2A power brick.

I still remember Moto’s statement(s) when it introduced the Moto G in November 2013, and then the Moto E in May 2014. It said it aimed to offer quality hardware without any compromises at budget-friendly prices, so even first-time smartphone buyers could enjoy a premium experience. With the Moto C Plus, the brand seems to be going lower in terms of the price tag. Even at this price though, it manages to offer decent hardware with a smooth software experience and a long-lasting battery. 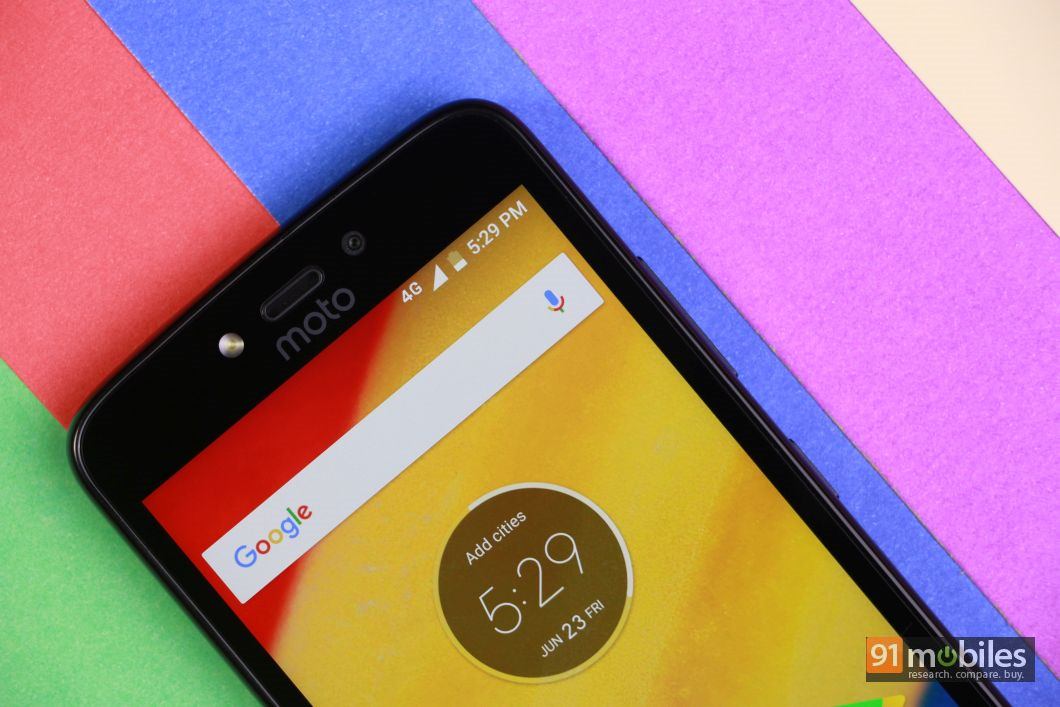 But times have changed, and now even the sub-Rs 8k price band attracts attention from big players, which means that the Moto C Plus faces tough competition. Its biggest challenger is the Xiaomi Redmi 4, which not only packs in better hardware specs, but also comes encased in a metal body flaunting a fingerprint scanner at the back. In fact, the Redmi 4A (review), which is available for Rs 5,999, also trumps the C Plus in terms of the core specs. Micromax’s Evok Power (review) is also a worthy contender, and promises marathon battery backup.

If the C Plus was also available offline like its sibling, that’d have given Moto’s entry-level smartphone an edge over its rivals. But since that’s not the case, I’d have to conclude by saying that despite its decent spec sheet, latest Android version and affordable price, the Moto C Plus isn’t the only choice in this segment.