91mobiles.com
Home Comparisons Nokia G60 5G vs Nothing Phone (1): which phone to buy at... 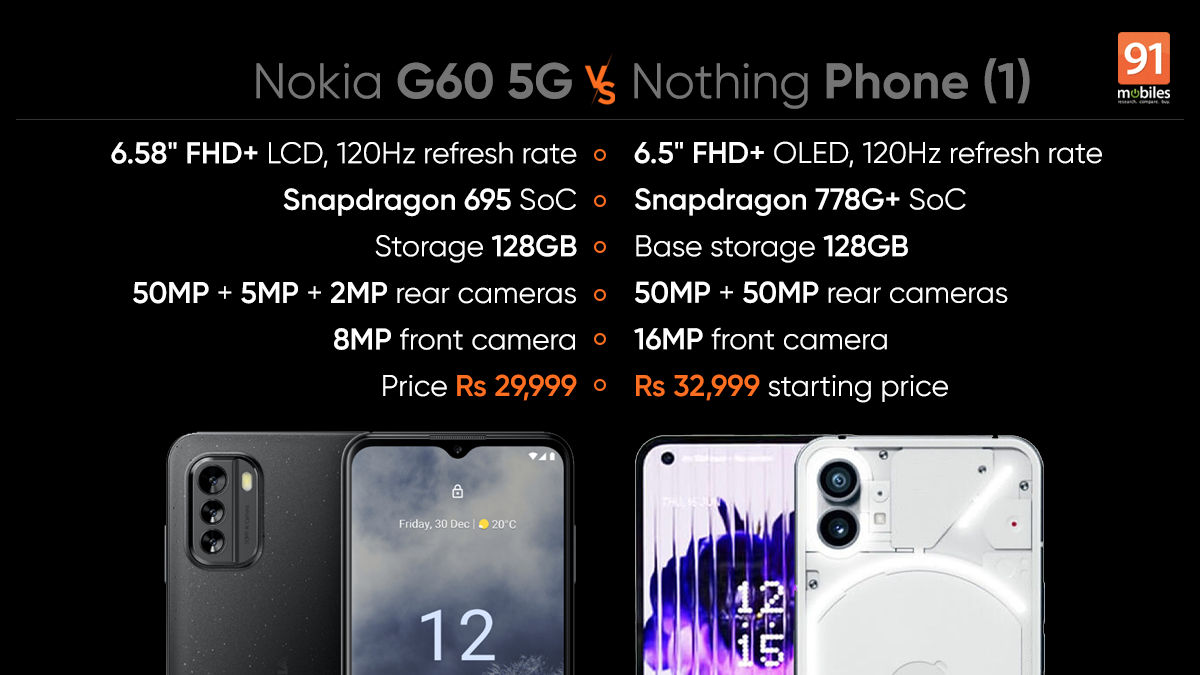 HDM Global recently launched the Nokia G60 mid-range smartphone in India for a price tag of Rs 29,999. At this price point, the phone offers a Snapdragon 695 chipset, a 120Hz LCD panel with a dew-drop notch, a 4,500mAh battery, a 50MP triple camera setup, and more. That said, the Nokia G60 is exposed to fierce competition in this segment, especially from the well-known Nothing Phone (1). We take a closer look at how the new Nokia G60 5G compares to the Nothing Phone (1). In this comparison, we’ll look at how the two phones differ from one another in terms of price, design, and specifications.

The Nokia G60 5G has been only offered in one version in the Indian market, with 6GB RAM and 128GB of internal storage, which is priced at Rs 29,999.

On the other hand, the Nothing Phone (1) comes in three memory options, with a choice of either 8GB or 12GB RAM. Pricing for the base variant with 8GB RAM and 128GB storage is Rs 32,999.

The Nokia G60 5G resembles other more affordable options in terms of appearance. With a bigger screen and a dewdrop notch, it also has a classy-looking back. The demand for sustainable products is rising, and so HMD Global used recycled plastic to make the G60 5G. On the back, a triple camera arrangement is vertically aligned, and the bottom portion bears a large Nokia logo. The back is constructed entirely of recycled plastic and has a sparkly appearance that is particularly attractive on the Black colour variant. The phone features all the typical ports, a fingerprint sensor that is positioned on the side, Gorilla Glass 5 protection on the front, and an IP52-rated shell. 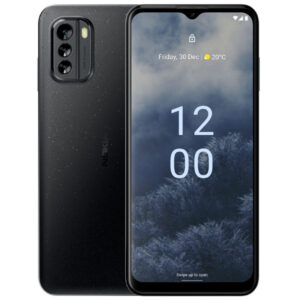 As modest as the Nokia G60 is, the Nothing Phone (1) is equally loud. It appears to look like an iPhone at first glance. It has flat glass on the front with flat aluminium sides, much like an iPhone. The back is where the real magic is. The Nothing Phone (1) features a transparent glass back with the insides of the phone on display. Nothing further enhanced the design by including LED strips that cover all of the crucial components, including the cameras, wireless charging coil, and the bottom. It is definitely a more unique-looking phone compared to the Nokia G60.

Another area where there are noticeable differences between the two phones is the display. The 6.58-inch Full HD+ LCD screen on the Nokia G60 5G features a dewdrop notch, and a 120Hz refresh rate, with thick bezels on all sides. Given the phone’s price, the display appears a bit dated.

In contrast, the Nothing Phone (1) (review) comes with a similarly sized 6.55-inch Full HD+ OLED panel with support for a 120Hz refresh rate. The panel features symmetrical bezels and is certified for HDR10+, thus every effort has been made to avoid cutting corners.

The Qualcomm Snapdragon 695 SoC, which is in the mid-range, powers the Nokia G60 5G. The latest generation of low-cost 5G smartphones now on the market is known to be powered by the Snapdragon 695. The G60 is available in several configurations, but the models being offered in India feature 6GB RAM and 128GB of internal storage. 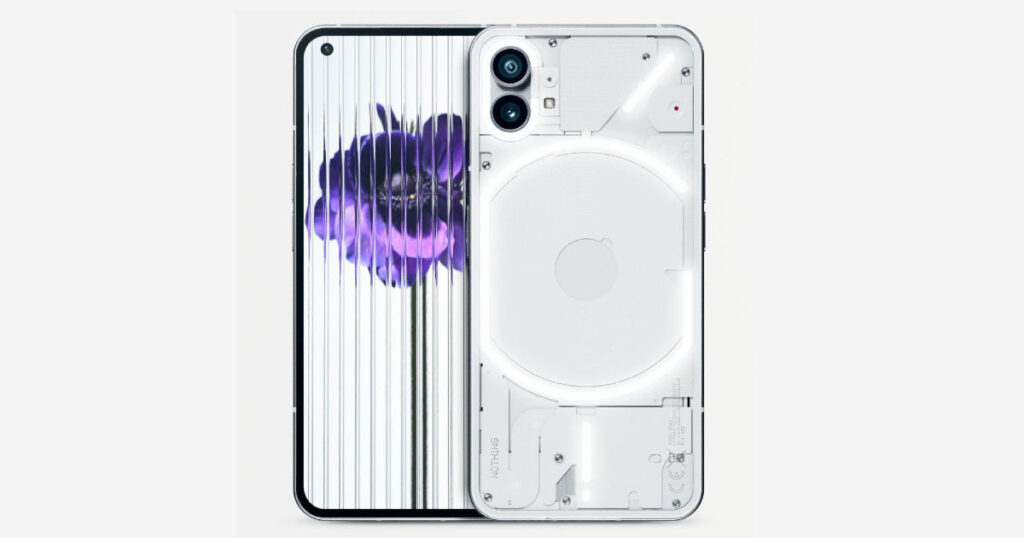 The Nothing Phone is powered by a newer Qualcomm Snapdragon 778G+ SoC. Qualcomm has modified the SD778G+ SoC for the Phone (1) and added support for a wireless charging module. The phone is offered in three memory configurations, which are: 8GB LPDDR5 RAM and 128GB UFS3.1 storage, 8GB RAM and 256GB storage, and the most expensive 12GB RAM and 256GB internal storage option.

As for the software, both handsets run the stock Android 12 operating system out of the box. Nokia has stayed to the basics and supplies some additional apps on top. The Nothing Phone (1) also does the same but in the process has added or tweaked some apps/services on top of the stock Android UI.

The Nokia G60 5G packs a triple camera setup on the rear with a 50MP main sensor which is assisted by a 5MP ultra-wide angle sensor and a 2MP depth sensor along with a dual-LED flash. A front-facing 8MP selfie camera with customized AI features is also included. The camera UI is stock and has several AI features scattered throughout.

The Nothing Phone (1) has a dual-camera setup on the rear, featuring a 50MP Sony IMX766 sensor with f/1.8 aperture, Dual OIS & EIS, and a 50MP Samsung JN1 Ultrawide angle lens and an LED flash. The selfies on the phone are handled by a 16MP sensor. The camera app features neatly laid UI along with custom modes and filters.

Both phones pack a decent 4,500mAh battery. The Nothing Phone (1) relies on the USB PD3.0 protocol and gets a 33W fast charging setup while the Nokia G60 5G’s charging is capped at 20W.