“Our take on Samsung’s latest affordable smartphone – the Galaxy M40”

It’s no secret that the affordable segment of smartphones – which attracts the most eyeballs in India – has been dominated by Chinese tech companies for a while now. After all, Chinese phones offer fantastic value for money and come loaded with the best specs and the latest features, making them an easy recommendation. 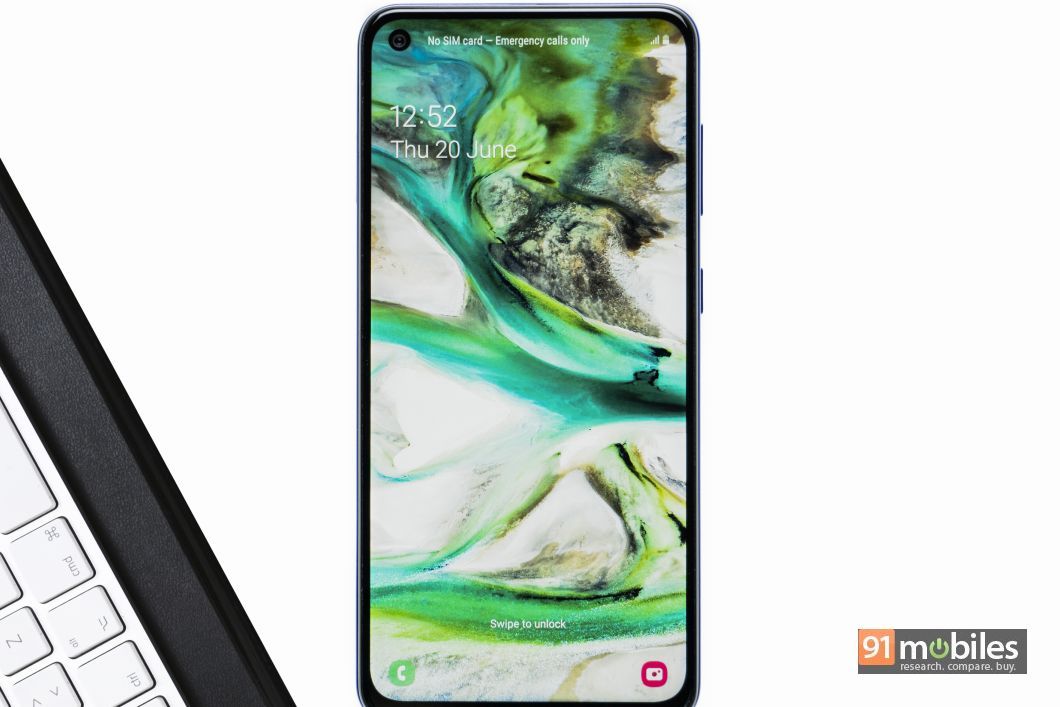 But, off late, Korean tech giant Samsung has been making a steady push back into the segment with its M-series of smartphones. The company’s latest handset, the M40, even goes toe-to-toe with the golden boy of the affordable space – the Redmi Note 7 Pro (review) – in terms of core specs. But, is it enough to overthrow the Chinese reign? To find out, I used the Galaxy M40 for over a week and here’s what I make of it.

The Samsung Galaxy M40’s design proves that the apple doesn’t fall too far from the tree. You see, from a distance, it’s hard to tell the M40 apart from its closest sibling, the M30. In fact, if not for the newer pseudo-glass finish on the M40, I would’ve mistaken one for the other. Now, don’t twist my words into thinking that the M40’s design is bad. On the contrary, the Galaxy M40 is among the nicest looking phones in the market and between its fancy curves, slim girth and a unique chromatic ring which circles its rear camera, the handset leaves a lasting impression. 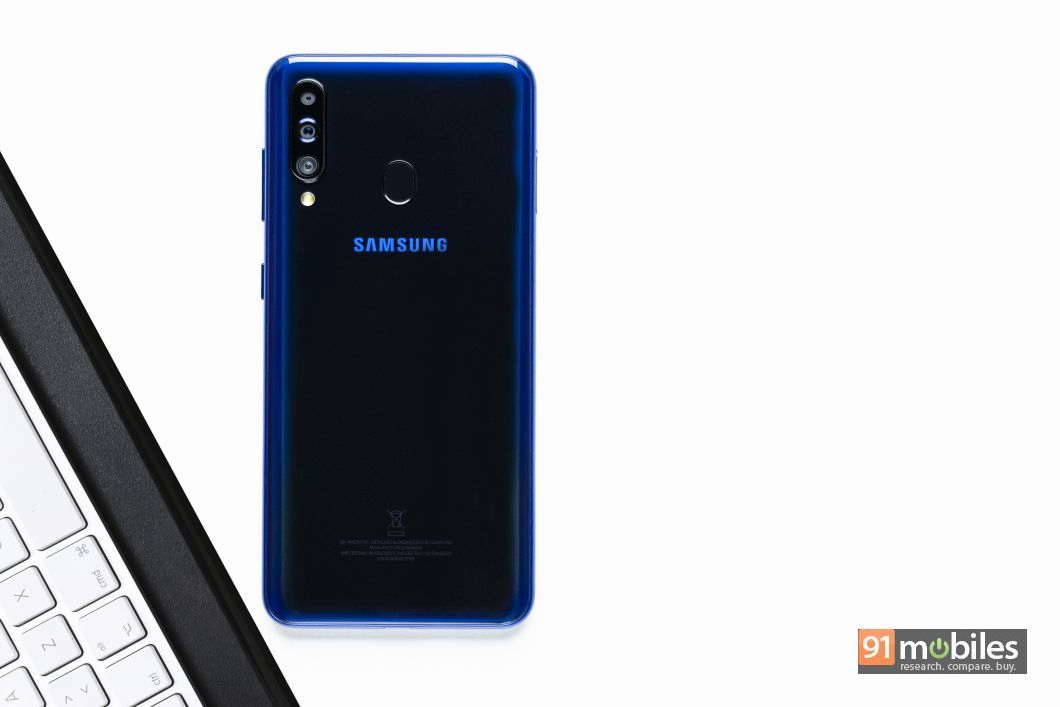 Moreover, the handset’s Seawater Blue hue is to die for, and I feel that more manufacturers should incorporate vibrant, punchy colours in their offerings. Unfortunately, I got the Midnight Blue colourway of the device for review, but I will attach a screenshot from the company’s webpage to give you a better picture.

Now, no surprises here – the back of the phone is a fingerprint magnet, so you’ll have to wipe it down occasionally to keep it smudge free. On the flipside, the M40 is quite possibly the lightest phone I’ve held in my hands, which makes it that much more pocketable and one-hand friendly. You’ll also get a capacitive fingerprint sensor positioned towards the back of the phone, which works well. The sensor unlocked the phone in a jiffy and was quite consistent throughout my testing. However, since the unit sits flush with the phone’s chassis, I had a hard time figuring out where to land my finger. 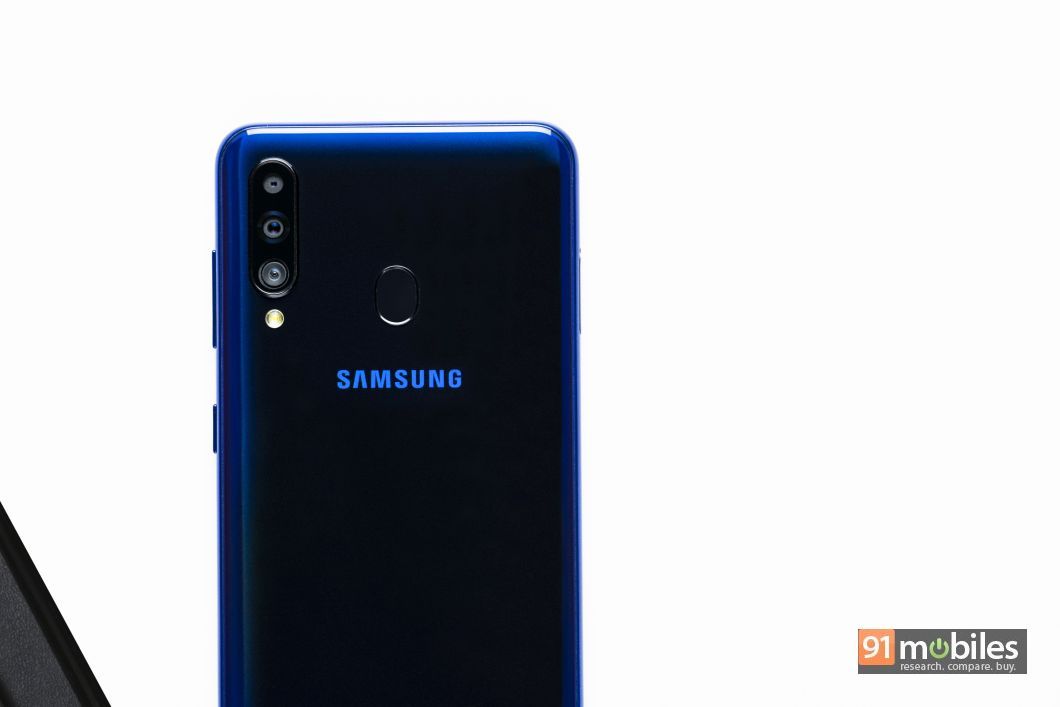 Therefore, for the duration of my review, I used the phone’s face unlock feature in conjunction with the fingerprint sensor. The feature worked well during the day, albeit was noticeably slower to unlock the phone. At night, the phone struggled to identify my face, forcing me to use the fingerprint sensor, and hence, the vicious cycle continued. 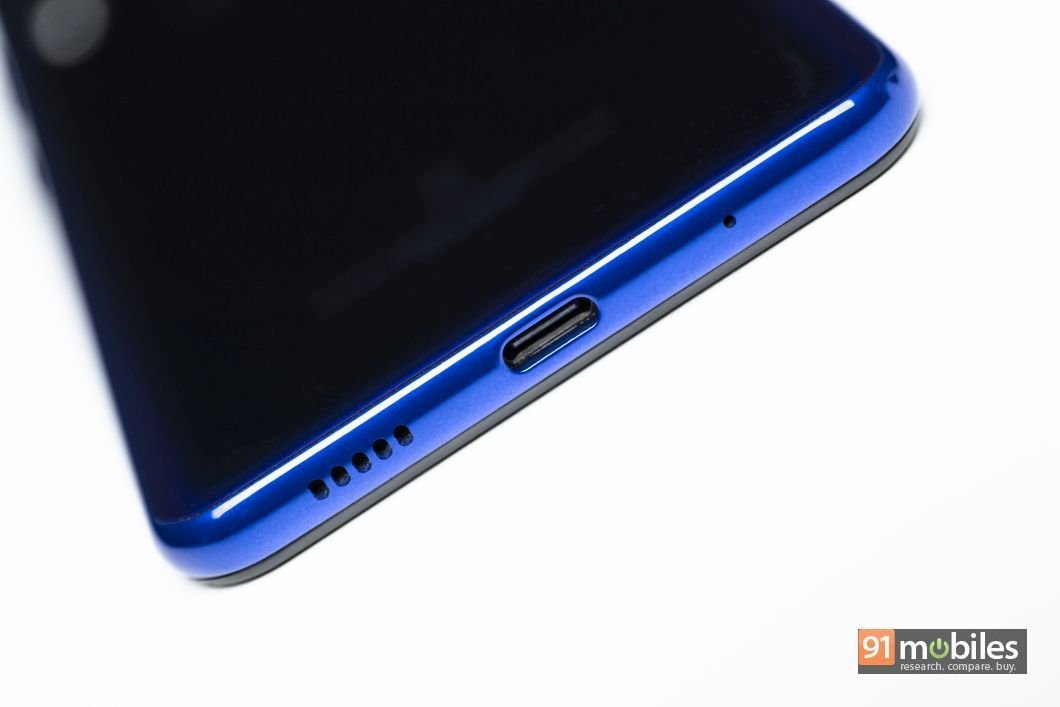 I’d also like to point out that unlike the competition, the Galaxy M40 doesn’t ship with a headphone jack. That’s quite a bummer and I would’ve rather compromised on the smartphone’s thickness if it meant the company would furnish the phone with the analog port. Moreover, the phone also lacks an earpiece and instead, makes use of the company’s Screen Sound cast technology which essentially converts the entire display of the phone into a speaker. Now, don’t worry – you won’t be broadcasting your phone calls to the world and the call quality was per my expectations too. There’s also a mono speaker towards the bottom of the phone which gets audaciously loud. So, if you like binge watching repeats of F.R.I.E.N.D.s on your phone, then the M40 will serve you well. 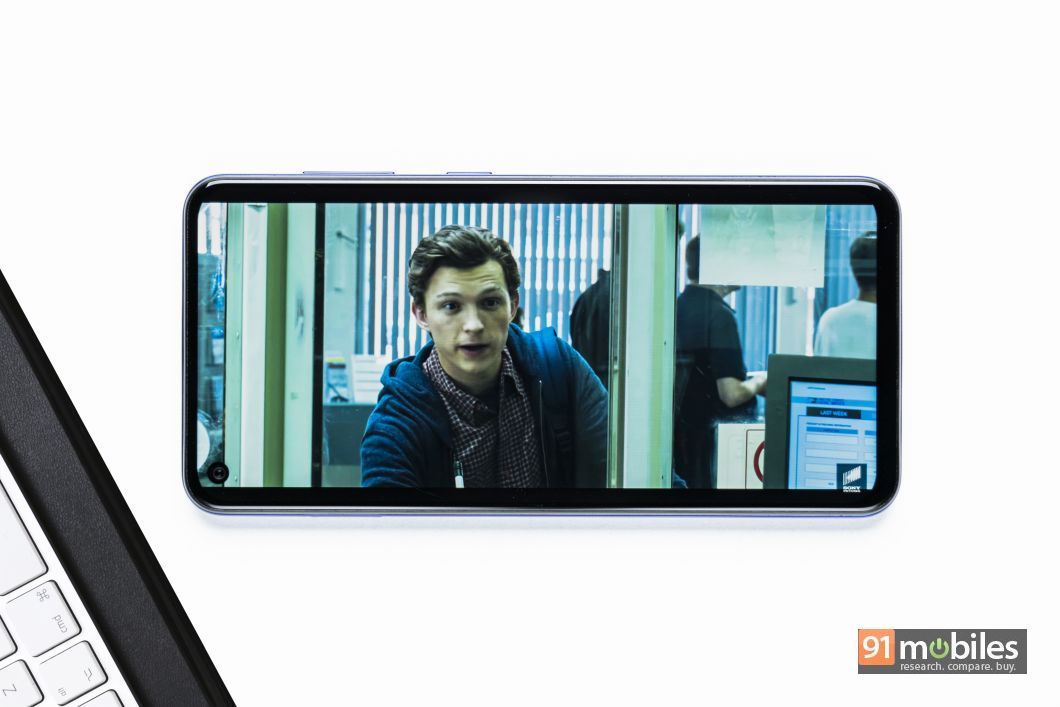 Coming to the display, the Samsung Galaxy M40 ships with a 6.3-inch Infinity O display with a punch hole notch. The display boasts an FHD+ resolution and is backed by IPS LCD technology, which is a step down from its predecessors Super AMOLED panel. That being said, while the panel doesn’t boast as excellent dark levels, it makes up for it by offering a much higher screen-to-body ration at 91.8 percent. Correspondingly, watching videos on the M40’s ginormous screen is an absolute treat, and since the display gets quite bright, I didn’t struggle whilst using the phone outdoors either.

The Samsung Galaxy M40 ships with Qualcomm’s Snapdragon 675 processor which works alongside 6GB of RAM and 128GB of built-in, user-expandable storage. Unsurprisingly, the handset is competent enough to handle everyday tasks with ease and can even play most intensive games from the Play Store at medium to high settings. Case in point, PUBG Mobile which defaults to high settings on the phone and plays smoothly, though you will get better frame rates if you lower the graphics preset to HD. 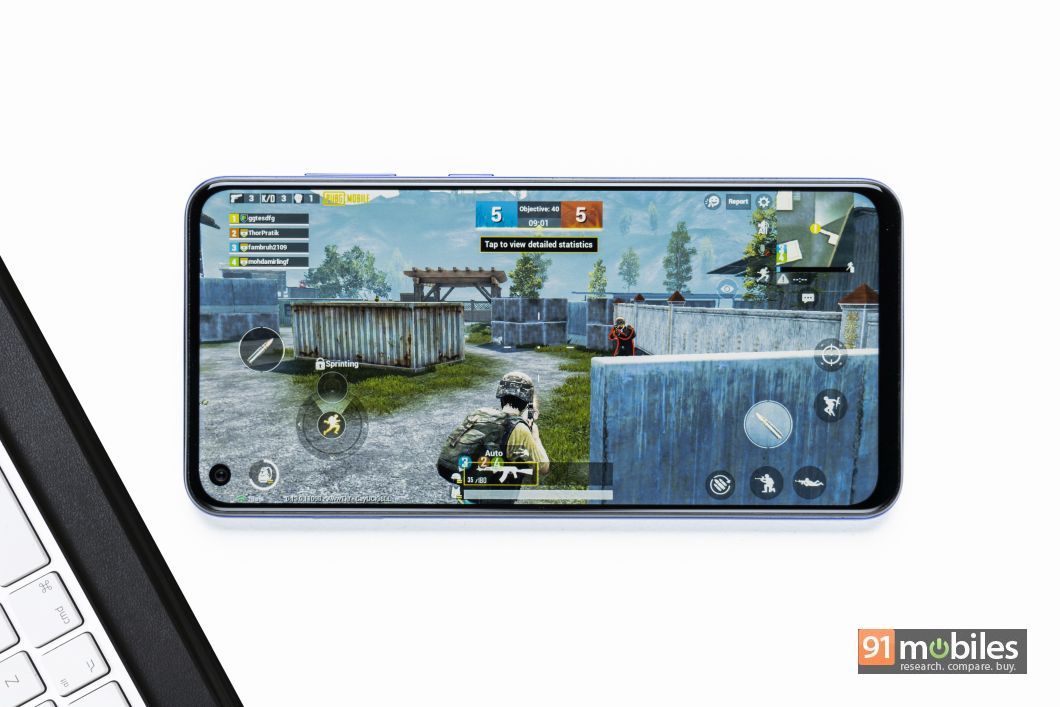 As a daily driver, the Galaxy M40 rarely ever disappointed. Jumping in and out of applications was brisk, and the phone even retained a bunch of resource-hungry apps like Snapchat in memory. I did come across the occasional stutter and animations did jitter every once in a while, but that’s to be expected at this price point. 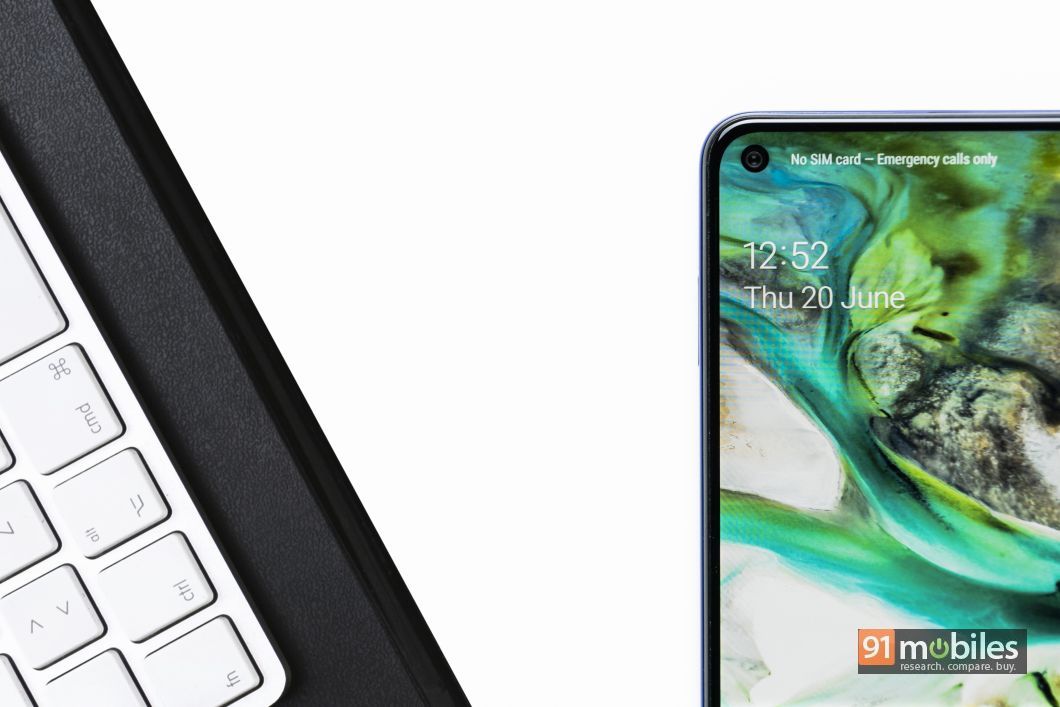 In the battery department, the Samsung Galaxy M40 ships with a 3,500mAh cell which comes with support for 15W fast charging. Having used the phone for a week, I can confirm that the battery life on the M40 is average at best. The phone barely managed to see me through the end of a heavy workday and therefore, if you’re a heavy user, you might want to look at other phones with beefier batteries. To give you a clearer picture, the M40 lasted just nine hours in PCMark’s battery drain test, which is quite disappointing. 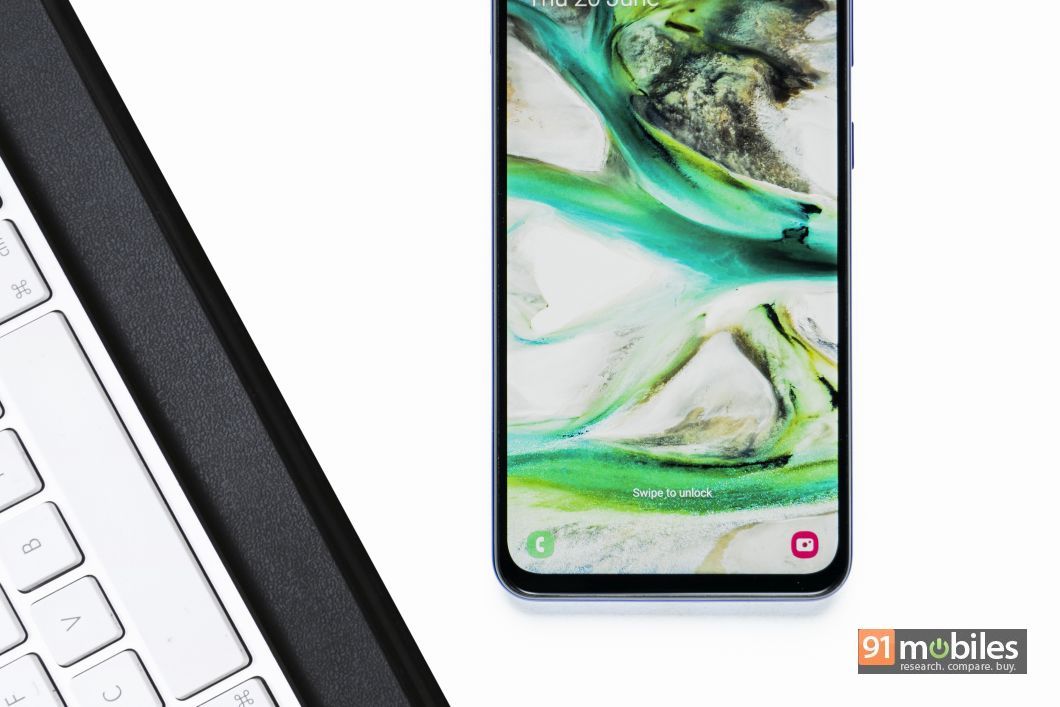 Coming to the software, the handset boots the company’s OneUI skin which is layered on top of Android 9 Pie. Samsung’s custom skin has come a long way and it offers a minimalistic UI with little to no bloatware. The UI also ships with some interesting features, such as the ability to turn on a system-wide dark theme, navigational gestures as well as a full-fledged theme store which you can use to spruce up your M40. All in all, the software onboard the company’s latest Galaxy is top-notch, so no complaints here.

With more and more manufacturers incorporating a 48MP sensor in their affordable offerings, it’s surprising to see Samsung opt for a 32MP, f/1.7 aperture primary camera for its M40 smartphone. The primary camera works alongside a 5MP, f/2.2 aperture depth sensor and an 8MP ultra-wide lens with a 123-degree field of view. For selfies, the device ships with a 16MP front snapper with f/2.0 aperture. Thankfully, pixel count isn’t everything, as the M40 clearly demonstrated during my time with the phone. Photos I took with the device during the day had ample details, great dynamic range, and fantastic colours. In fact, when I showed my colleagues a picture I clicked with the M40 as well as the Redmi Note 7 Pro, most of them gravitated towards Samsung’s offering owing to the vibrancy in the shot. Clearly, on face value, Samsung’s M40’s images are comfortably on par with the competition and at times, even better.

Now, while I was a huge fan of the smartphone’s image processing, I did notice that the photos weren’t as sharp as the ones I got from the Redmi Note 7 Pro or the Realme 3 Pro. Moreover, despite shipping with a dedicated depth sensor, the company’s live focus mode didn’t clear a convincing blur around the borders of the subject either. And, while the ultra-wide angle allowed me to capture a scene without taking a few steps back, there was a slight lens flaring when it was bright outdoors. To the phone’s credit, manually exposing a shot resulted in much better photos. The smartphone did struggle to output a decent image in lowlight scenarios, which could have something to do with the lack of a dedicated night mode. However, if you are nocturnal, then I should tell you that with a little editing, you can get a gram-worthy photo with the M40 after the sun has set. 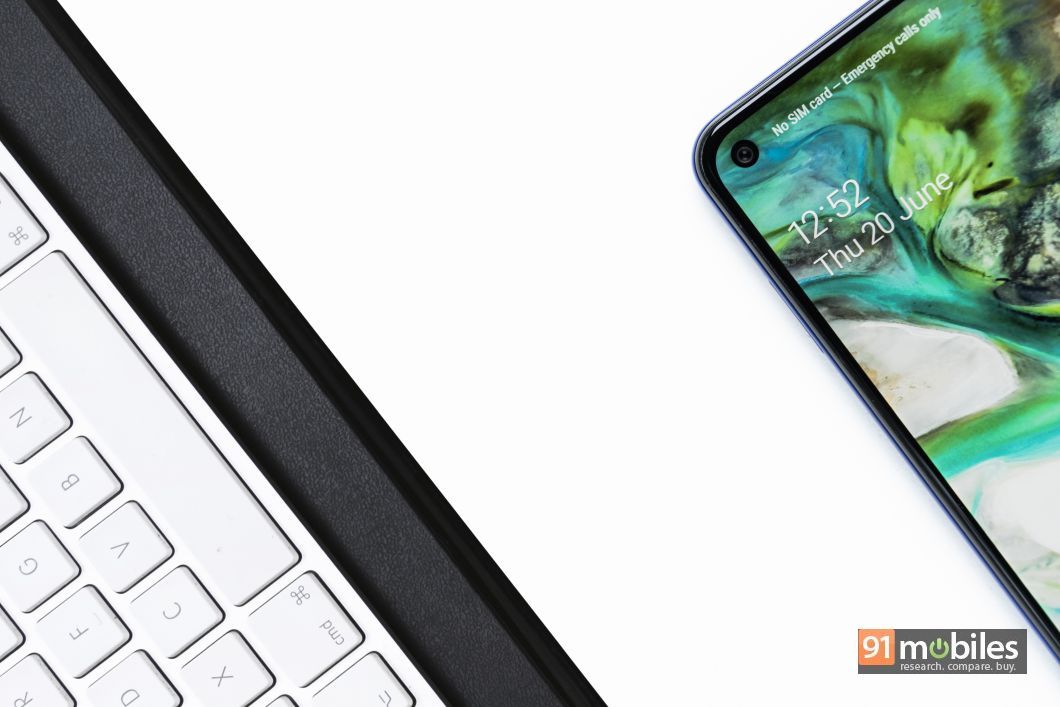 As for selfies, the smartphone’s 16MP shooter did not disappoint. With the ‘powder queen’ beauty mode turned off, the M40 clicked detailed selfies. The handset even managed to expose the pictures I’d taken with the sun behind my back perfectly. At night, the handset’s built-in screen flash functionality allowed me to get a serviceable photo as well.

It goes without saying that buyers seeking the most bang for their buck should still pick up the Redmi Note 7 Pro, as it offers the same grunt under the hood as the M40 albeit ships with better cameras and a beefier cell. Similarly, the Realme 3 Pro (review) too offers the same core specs and outperforms Samsung’s offering in the camera and the battery department. 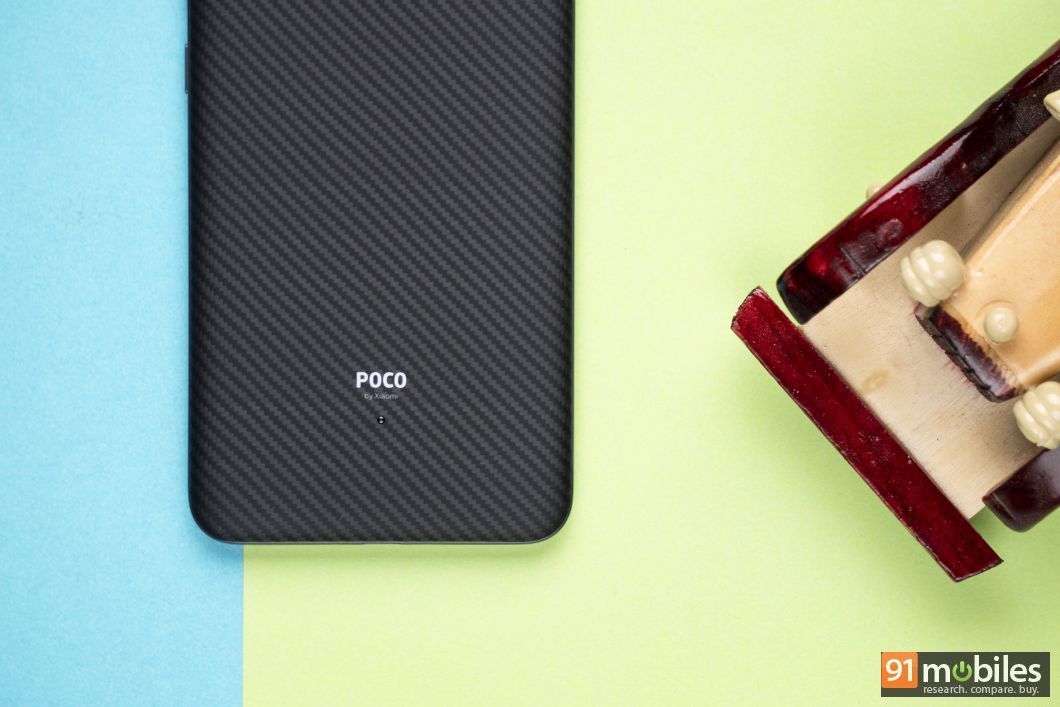 If you want the ultimate performance for the price, then look no further than the POCO F1 (review). The phone features Qualcomm’s Snapdragon 845 processor and owing to its recent price cut, is an even more enticing deal.

The Samsung Galaxy M40 brings a lot of innovative features to the affordable segment, including its Screen Sound casting technology and its punch hole display. What’s more, for the price, the handset offers good performance, capable cameras, and a slender design which looks beautiful, to say the least. 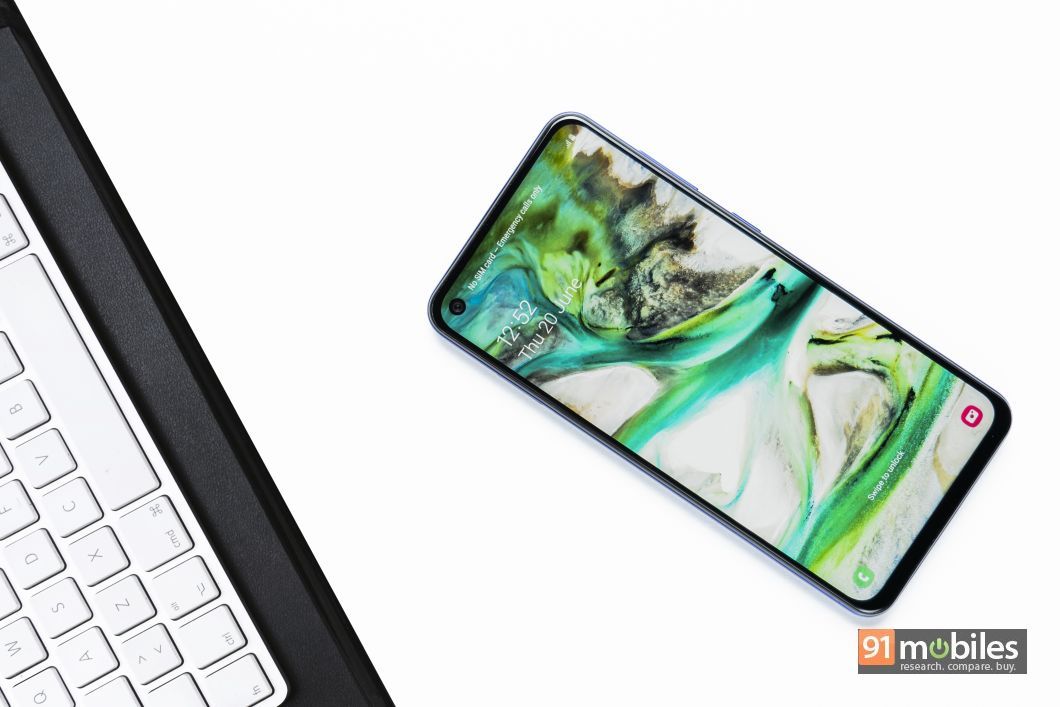 Now, at the expense of sounding like a broken record, the Galaxy M40 is a good phone, but much like some other Samsung devices, it could’ve been priced more competitively. Therefore, if you want the most bang for your buck, you will still have to stick with Chinese OEMs for now. However, if you’re a sucker for the Samsung brand name, then there’s no better affordable phone for you than the M40 in the market right now.