“The vivo V5 Plus is the best selfie phone out there. But, can it be more than just that?”

At the time of writing this review, there were close to 285 million photos on Instagram tagged #selfie. Just to give you a perspective, the total population of Australia — which is around 24 million — is less than one tenth of that number. Not to forget, the word ‘selfie’ is a part of the Oxford dictionary since 2013. If this isn’t enough to convince you that selfies have grown beyond just being a popular phenomenon – and are now a part of mainstream culture – no other metric or fact possibly will. 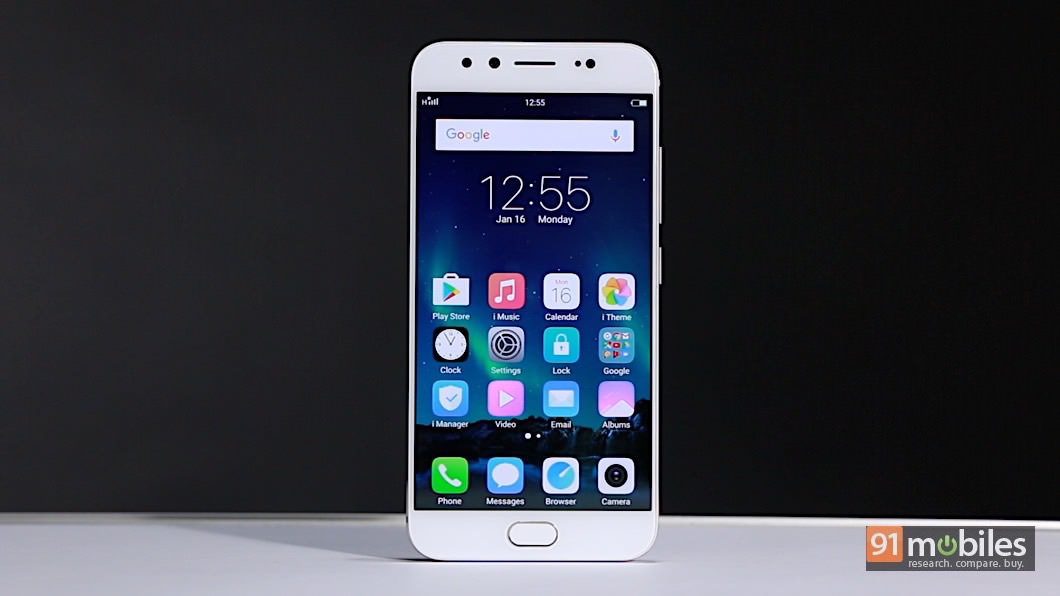 And therefore, it isn’t really surprising that Chinese brands like Gionee and vivo are catering to this demand by launching smartphones with impressive front cameras. In fact, vivo has gone one step further and introduced a smartphone with not one but two front cameras – the vivo V5 Plus, which is essentially an upgraded version of the vivo V5 (review). The two front cameras on the V5 Plus are accompanied by a flash module as well.

Before you stroke your narcissism and take tons of selfies, read this review and find out if the V5 Plus can be more than just a selfie phone.

Getting right down to business, the V5 Plus has a 20MP primary shooter supported by another 8MP camera. Both the cameras have an aperture of f/2.0 and vivo uses the secondary camera to capture depth information. Essentially, you can capture a good looking portrait of yourself with a neat bokeh effect. In all honesty, the idea to capture self portraits with depth information is quite an ingenious one. Two thumbs up to the engineers of vivo who came up with the idea. 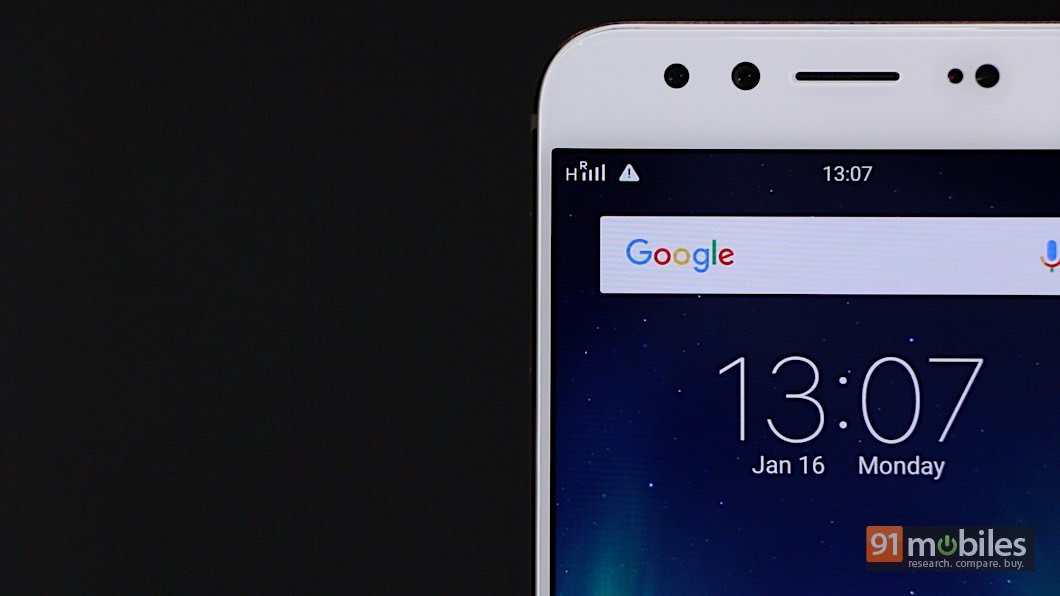 The selfies we captured retained a decent amount of details including the pimples and pores on the face. If you are not a fan of such intricate details, you can decide use the Beauty Mode to add a coat of virtual makeup. Just ensure that you don’t go overboard with it. If you are someone who is a night owl and likes to party till the break of dawn, then the front camera can also capture some decent low light selfies. vivo has also tuned the flash module to provide some decent soft lighting that falls directly on the face and illuminates it. You can use it to either fire a single shot of flash or use it as fill lighting like the professionals do. The front flash on the vivo V5 is one of the best we’ve used on a smartphone yet. 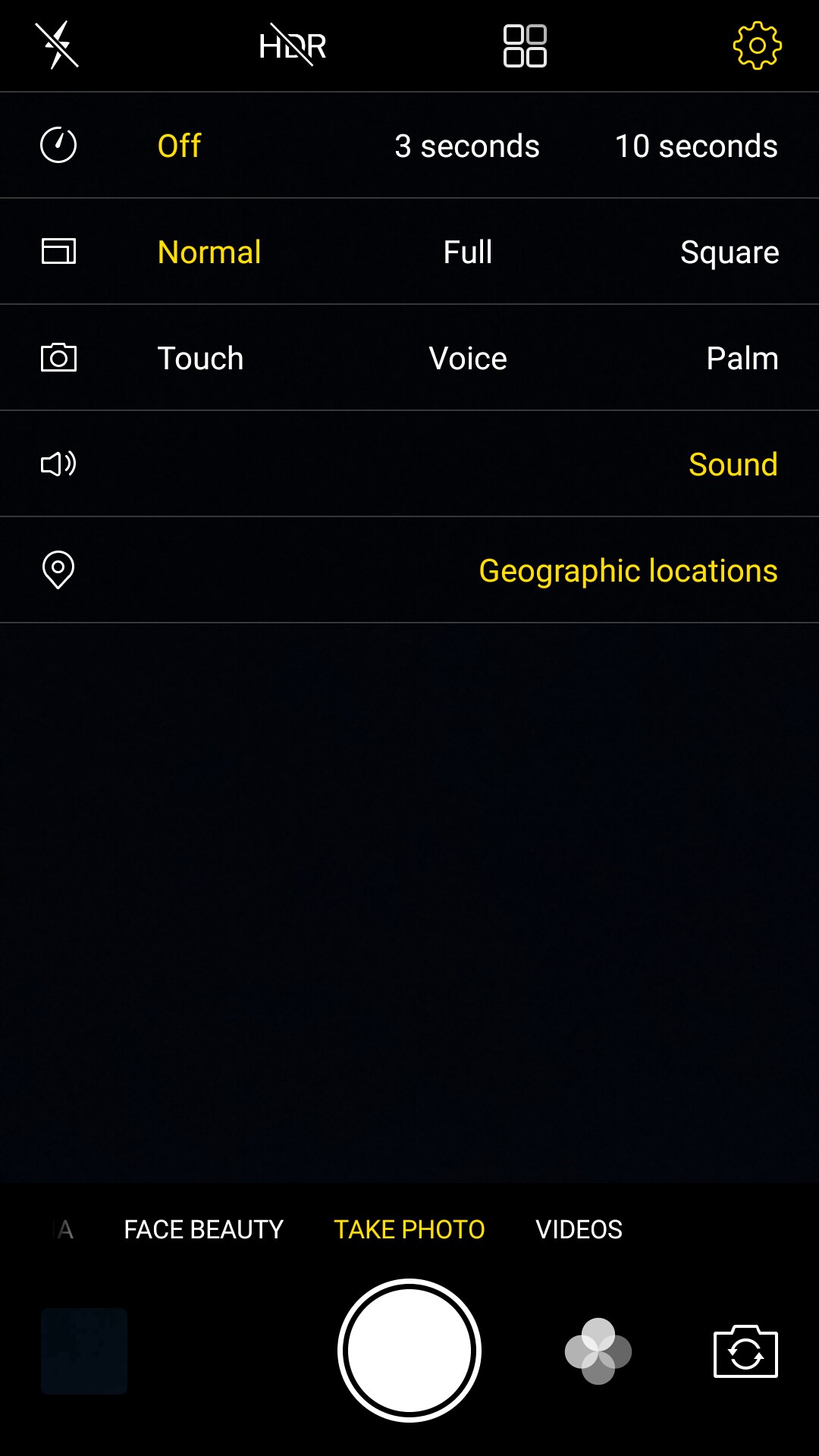 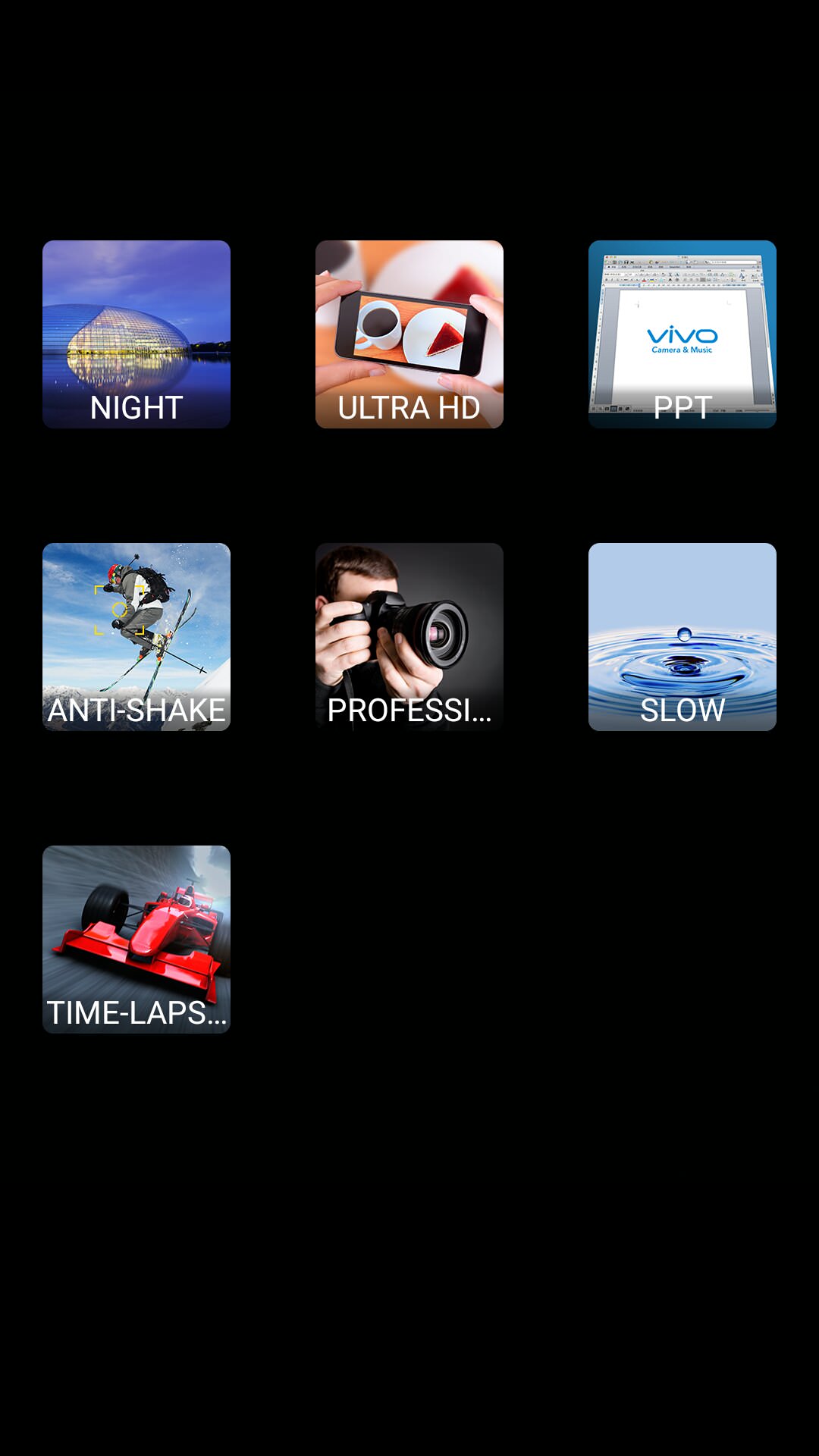 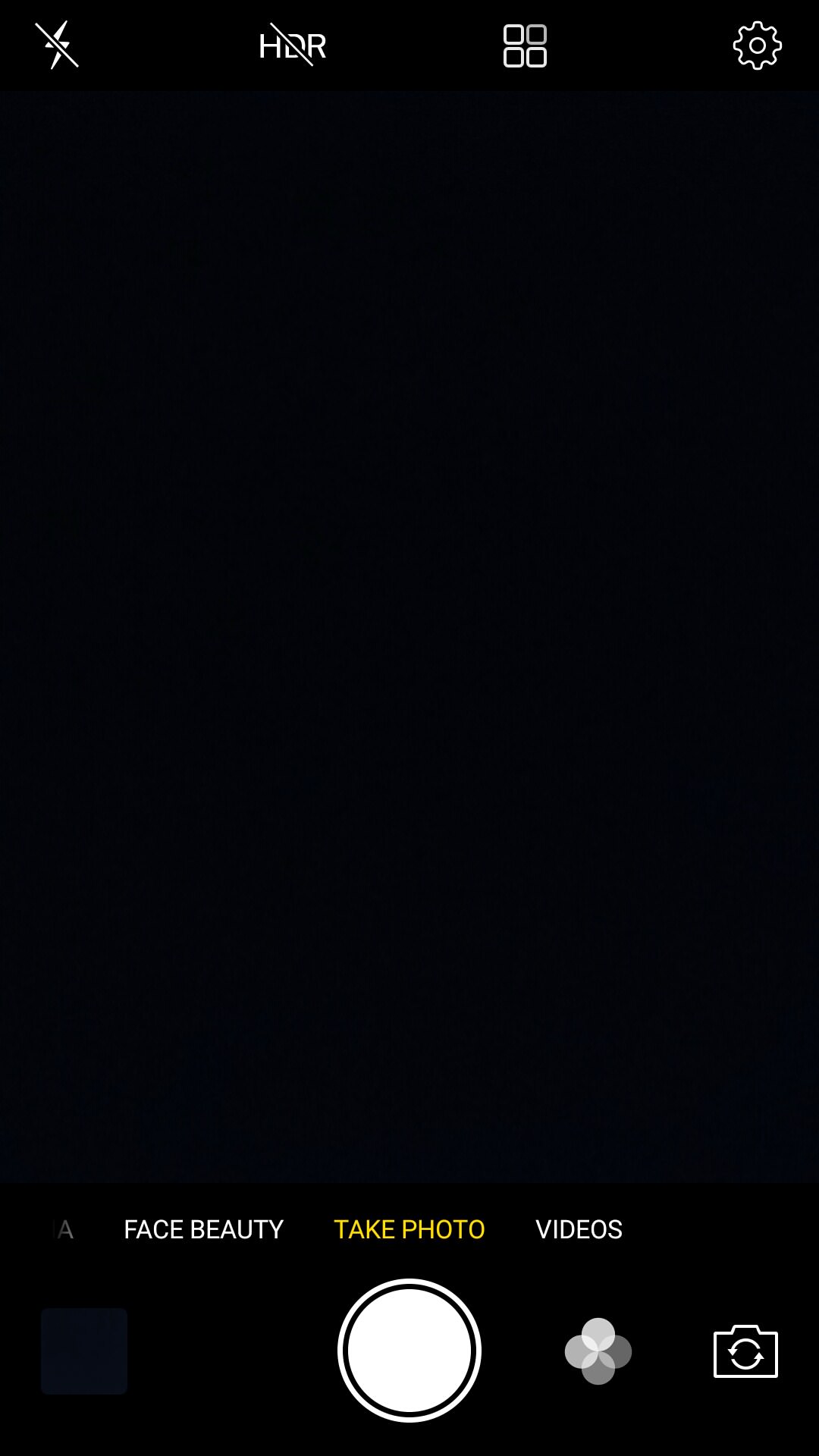 Let it be known that the 16-megapixel primary camera on the rear captures much more detailed photographs. The HDR mode also does a good job of improving the highlights and shadows to make the final image look impressive. However, in low light the primary camera struggles. We noticed a fair bit of lens flare, which indicates an exposure control issue. Despite using a lower ISO for most shots in the night, the noise levels were pretty high.

The rear camera can shoot 4K videos too. Now, these videos look good with well saturated colours and crisp details. Even the dynamic range is pretty good. The phone also captures stereo audio, which is of good quality. But all those positives take a backseat considering there is no OIS, which results in shaky footage.

The V5 Plus looks a lot like the Apple iPhone 7 (review) from the rear and there is no denying that. The rear camera module placed on the top left slightly juts out like the iPhone 7, and even the plastic antenna bands — running along the top and bottom edges of the phone — look strikingly similar to the design of Apple’s flagship phone. If not for the big vivo branding on the rear, it is easy to mistake the V5 plus for an Apple iPhone 7. 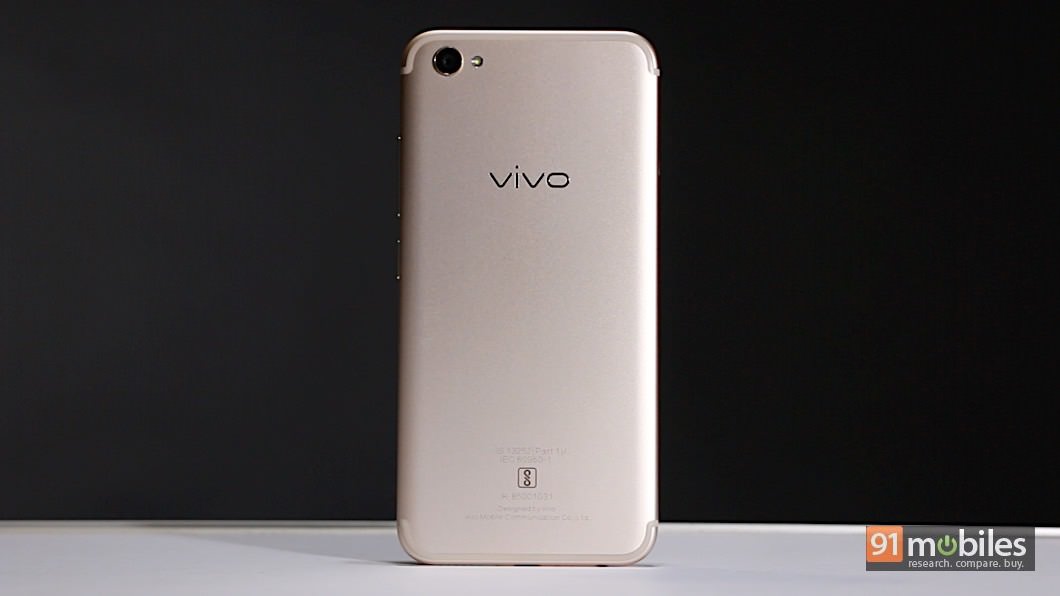 vivo has managed to trim the bezels around the display and the phone itself is pretty compact and handy. The v5 Plus is 7.6mm thick and its 158.6g weight makes it easy to operate with one hand. The tactile feedback of the physical power button and volume rocker is pretty decent too. The fingerprint scanner sits on the home button below the display. The fingerprint recognition happens almost instantaneously. Also, tapping the scanner once takes you back one step.

Moving on to the display, the V5 Plus is equipped with a 5.5-inch IPS LCD fullHD panel, which offers a fairly accurate colour reproduction. Even the viewing angles and sunlight legibility are quite decent. There is a 2.5D curved Gorilla Glass protection on top of the display as well. As far as the display is concerned, you won’t have much to complain about.

The V5 Plus runs the latest version of the company’s proprietary FunTouch OS version 3.0 on top of Android Marshmallow 6.0.1. It looks like, vivo loves the Apple iPhone so much that the company not only aped the physical design but even the software.To say that FunTouch is highly inspired by Apple’s iOS would be an understatement. From the app icons to the actual app design, there are many default apps that are inspired by iOS and the resemblance is more than just uncanny, it is unmistakeable. 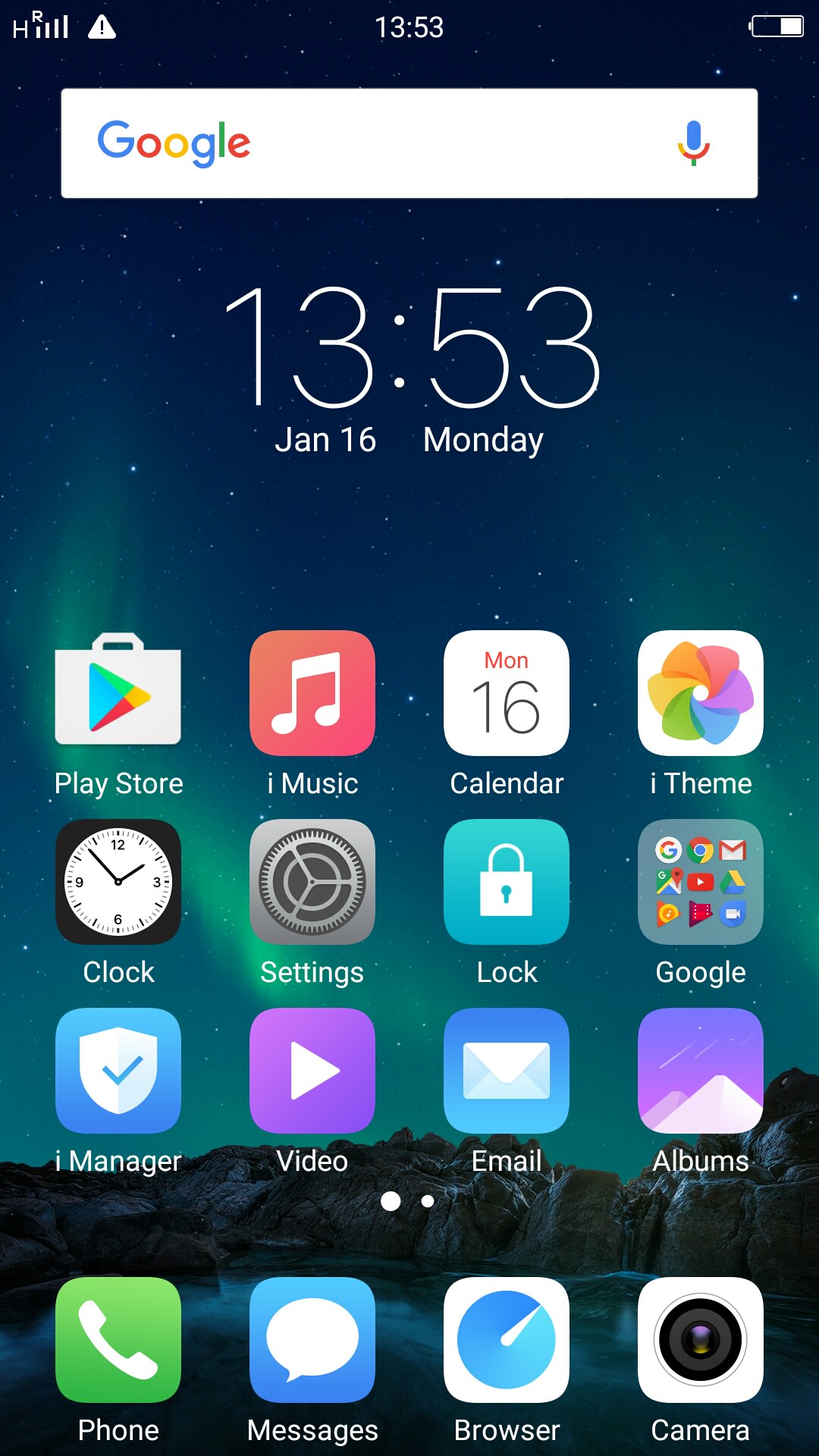 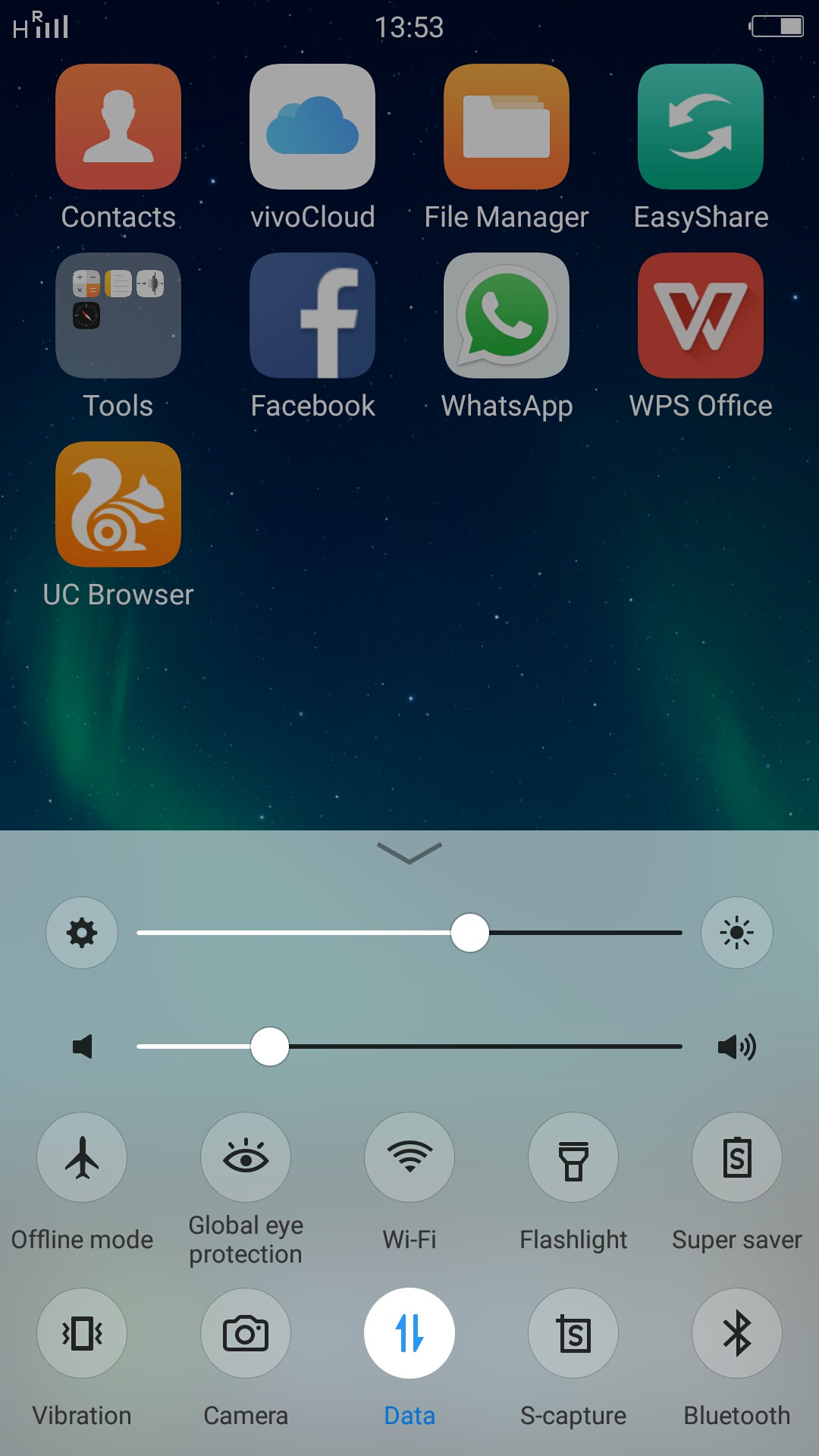 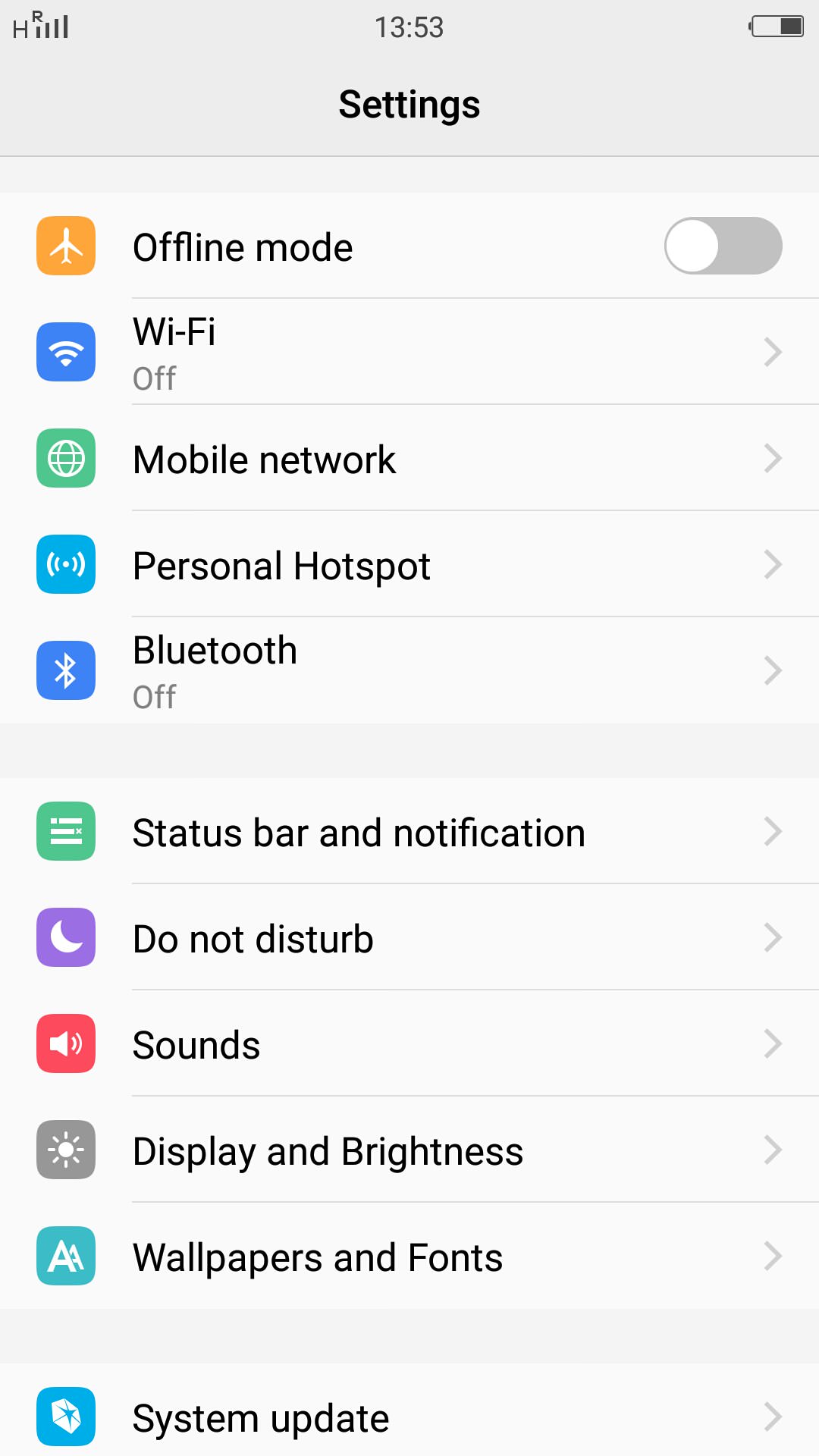 If you can look past that, we’d like to highlight that FunTouch OS is actually nimble and lightweight, and yet it offers a ton of features. Also, the very few third-party apps that are present can all be uninstalled if you don’t want it.

One of the new additions to the FunTouch OS is the Smart Split mode. Once this mode is activated, you can immediately enter the split screen mode if a message pops on the screen. Currently, it supports only the popular apps like Facebook, WhatsApp, VLC, and MX Player. It works well most of the time. But we don’t see a reason to use this mode because it could be a distraction while watching a video.

The V5 Plus is powered by the ever-dependable Snapdragon 625 SoC and it includes 4GB of RAM. There is 64GB of internal storage but you will have to be content with that because vivo has decided not to include a card slot for more storage. You can use an OTG pen drive to expand the storage limit though. Weirdly enough, OTG support is not on by default and you will have to switch on a software toggle to activate it.

The processor is fairly powerful and in our testing period, we didn’t face a single lag or slowdown at any point. We played Asphalt 8 and Modern Combat 5 – two Gameloft games that can really stress the SoC – and the V5 Plus handled them with fair ease. However, the slow load time problem I faced with the Lenovo P2 — which also uses a Snapdragon 625 SoC — resurfaced on the V5 Plus. For daily tasks like multitasking and switching between apps, the V5 Plus does a good job though. 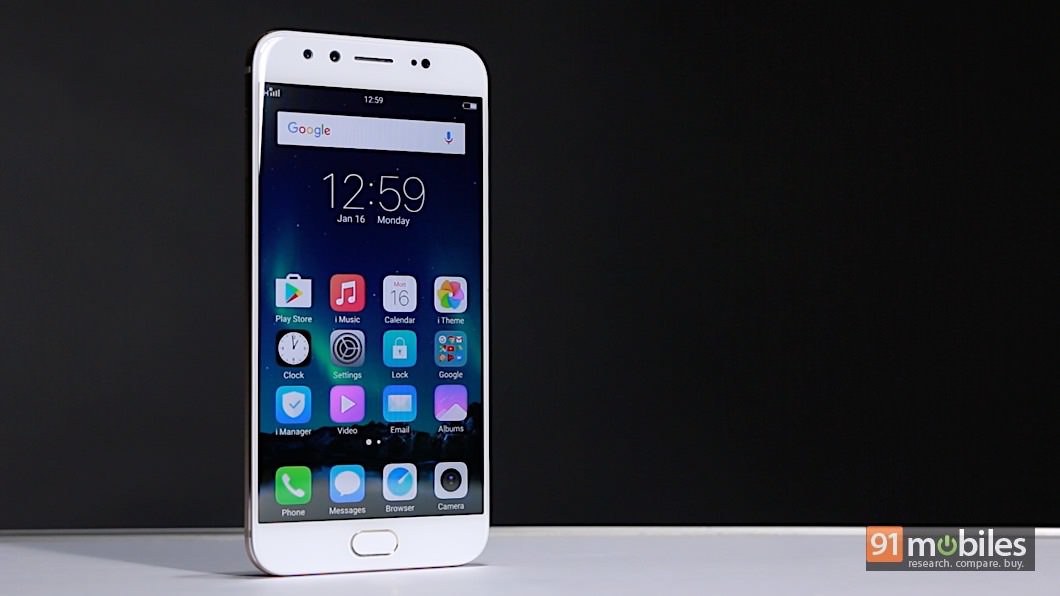 Moreover, the phone doesn’t heat up even when you stress the processor, which is great but not really surprising because the 625’s thermal efficiency has always been commendable. Talking about the 625, it uses a 14nm FinFET process for its SoC which makes it really power efficient. Other phones using the 625 – like the Moto Z Play (review), Lenovo P2 (review), and ASUS ZenFone 3 (review) – have showcased great battery performance in the past. The same continues with the V5 Plus.

The V5 Plus has a 3,055mAh battery, with support for fast charging. It charges from 0 to 100 in 1 hour and 40 minutes using the 5V, 2A charger, which is pretty good. The phone lasted 12 hours and 43 minutes in our lab test – a good result. We managed to squeeze around a little more than a day’s worth of usage from the phone. You should be able to do the same.

If you are someone who likes watching the latest series on Netflix or Amazon Prime, the V5 Plus should serve you well. Apart from handling the 4K videos we threw at it, the phone also offers great audio quality through earphones thanks to the dedicated custom-made AK4376 audio chip. We used it with our reference earphones and immediately noticed that the soundstaging improved drastically. To make full use of the audio chip, remember to switch on the Hi-Fi mode on in the default music player. All that effort to improve audio quality is undermined by the single mono loudspeaker. It can get loud but there is evident distortion at high volumes. 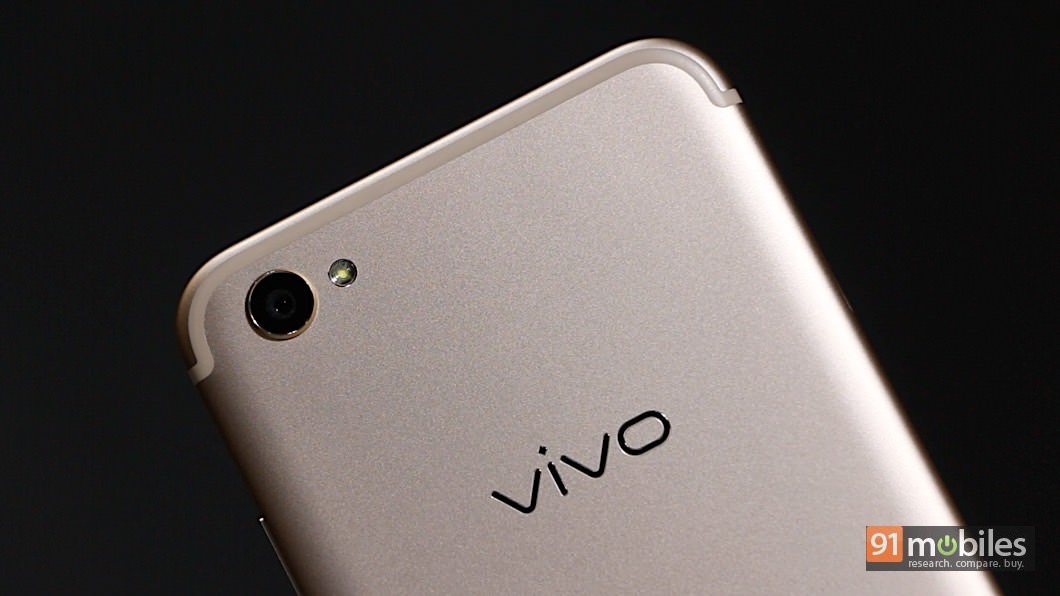 Coming to the call quality, we noticed that the sound quality was not very good. We could hear a lot of background noise in calls and voice quality at the receiver’s end wasn’t as clear as a Lenovo or a Motorola phone. Having said that, the V5 Plus manage to latch on to networks and hold the connection without any issue. It also supports VoLTE, for all you Jio users out there.

After using the phone, we are fairly convinced that the vivo V5 Plus is by far the best smartphone for selfie lovers. Now, the question you have to ask yourself is if capturing selfies is all you want to do with your phone? We are really hoping not. So, is the V5 Plus more than just a selfie phone? Mostly yes. It is a phone you can buy even if the front cameras weren’t as impressive.

Having said that, competing phones like the Moto Z Play, ASUS ZenFone 3, Samsung Galaxy A7 (2016), and the OnePlus 3T (review) offer a little more. For example, the Z Play offers modularity while the 3T offers far superior performance.

Therefore, buying a V5 Plus squarely rests on your affinity for taking selfies. Are you someone who says “first, let me take a selfie?” before actually saying hello? Then the V5 Plus might just be the phone for you.