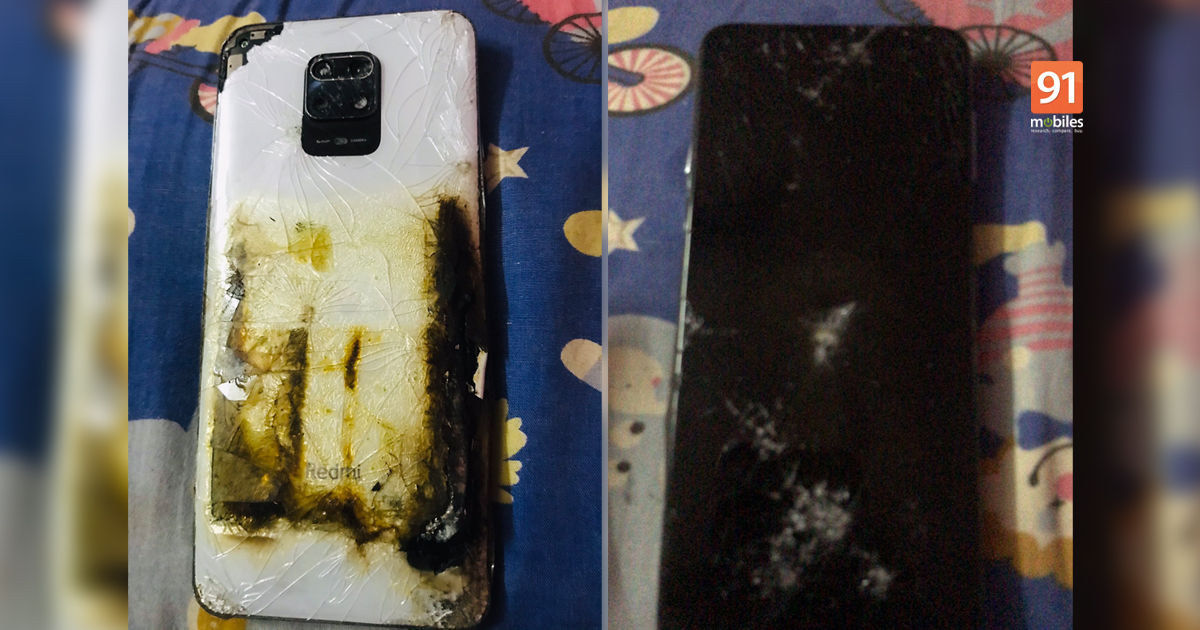 A Redmi Note 9 Pro/ Pro Max unit suffered unrepairable damage in what is yet another case of a Xiaomi phone catching fire. A Redmi customer Priyanka Pavra took to Twitter to complain of a Redmi Note 9 Pro/ Pro Max unit catching fire. While the customer is yet to respond to 91mobiles’ queries regarding the actual conditions that led to the blast, the official Redmi India Support team has responded to her online. As for the reasons for the Redmi Note 9 Pro blast incident, Xiaomi said that initial investigations by the company revealed that the blast occurred due to external forces and has been classified as ‘customer-induced damage’. However, Xiaomi is yet to provide a clearer explanation as to what the ‘external force’ could have been.

In the tweet, Pavra says that she purchased the Redmi smartphone for her brother in December 2020. All was good until today when suddenly Priyanka’s brother noticed smoke coming out from the handset out of nowhere. Having seen quite a few phone blast incidents on the web, he instinctively threw the phone in water. Images posted by Pavra on Twitter show the phone has been completely damaged, with a broken display and the back portion burned and the glass cracked due to smoke. The Redmi Note 9 Pro/ Pro Max is clearly not going to be functional anymore, but fortunately, the incident didn’t harm the user. Since Xiaomi says the smoke is caused due to ‘customer induced damage’, it is unlikely the brand will offer a replacement or reimburse for the damage done.

I purchased this phone in the month of December for my younger brother and today few mins back it’s start smoking he was scared and he throw water on it because he already saw to many add about phone blast. @RedmiSupportIN @manukumarjain pic.twitter.com/8yn2Zt9YqR

A Xiaomi spokesperson in a statement to 91mobiles said, “At Redmi India, customer safety is of utmost importance and we take such matters extremely seriously. All our devices go through various levels of stringent quality tests to ensure that the quality of the device is not compromised at any level. At this stage, our team is investigating this case to determine the cause. Based on our initial investigation, the damage was caused due to external force, and thus, classified under ‘customer induced damage’. We are in touch with the customer to ensure that the matter is resolved at the earliest.”

There were two major incidents of Xiaomi phone blasts year that caught the headlines. In one case, a Redmi Note 6 Pro in a Gujarat retail outlet started emanating smoke, leading a technician to throw out the phone to avoid damage. The second case saw a Redmi Note 7 Pro heating up in the customer’s pocket before it caught on fire; thankfully, the customer had managed to pull it out and throw it on his bag before the blast could do bodily harm. Nonetheless, the bag was completely burnt and the fire grew too big to be contained even by a fire extinguisher. In the second case, Xiaomi said “the device was already damaged before it was brought to the service centre” and gave the customer a new phone and a bag as compensation.