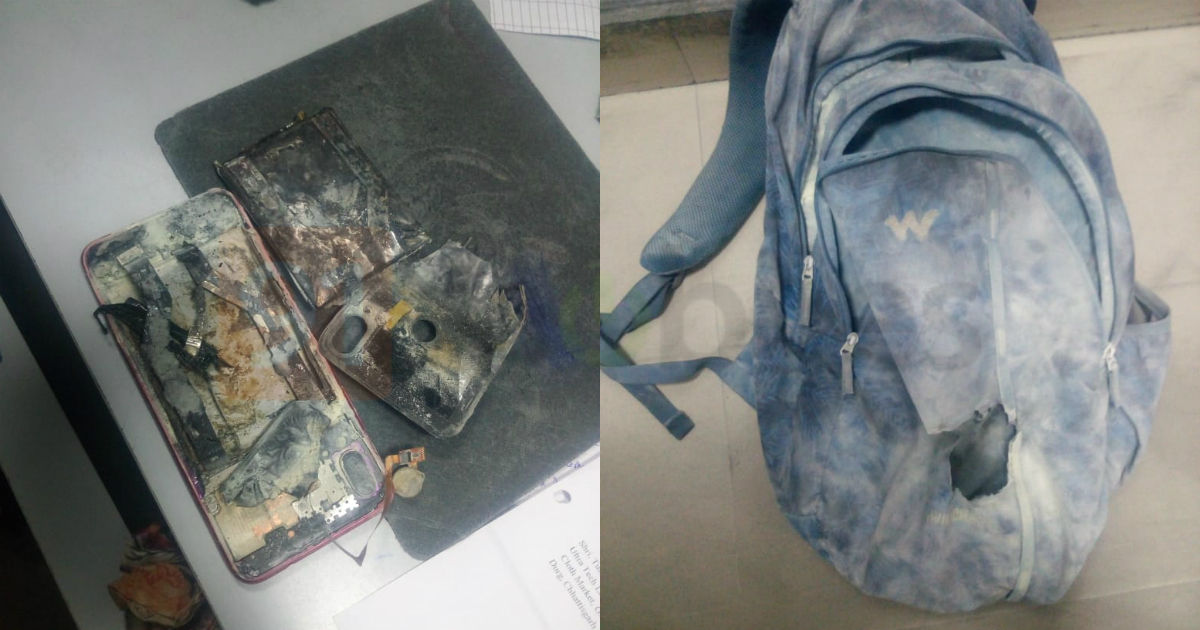 “The matter has now been resolved amicably with the affected customer”

A Gurgaon man has been left shaken as his Redmi Note 7 Pro unit exploded within seconds of heating up in his pocket. In a post, Gurgaon-based Vikesh Kumar said his unit exploded after a battery blast, which also set his bag ablaze and completely incinerated it. The smartphone had been purchased in December 2019 and was always charged using the bundled charger. Kumar says he did not suffer any physical harm but adds that he was disappointed with the response from the Xiaomi service centre, which first tried to blame him for the blast and then attempted to extract money out of him for a replacement unit. The incident happened yesterday, and the Xiaomi customer put his ordeal on social media today after receiving the poor response from the service centre. 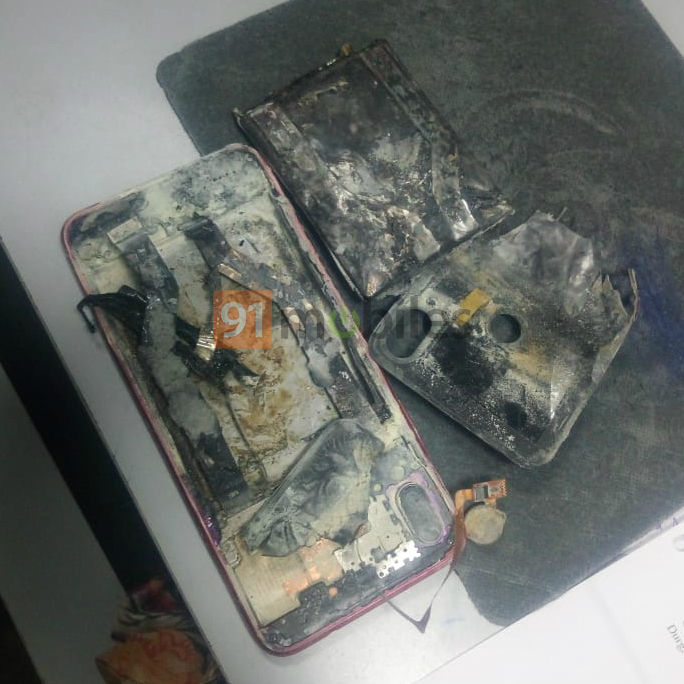 Speaking exclusively with 91mobiles, Kumar said the Redmi Note 7 Pro unit was at 90 percent charge when he reached his workplace earlier today. He soon felt the smartphone’s temperature rise up steadily and took the phone out of his pocket seconds later. Upon taking the phone out of his pocket, he saw the smoke emitting from the battery and threw it towards his bag that was lying nearby. That’s when the Redmi Note 7 Pro unit exploded and set the bag on fire, completely destroying it within minutes. In fact, the fire grew so big that it could not be put out without using a fire extinguisher – Kumar says he could have suffered physical damage had he delayed taking the phone out of his pocket by even 5 seconds. 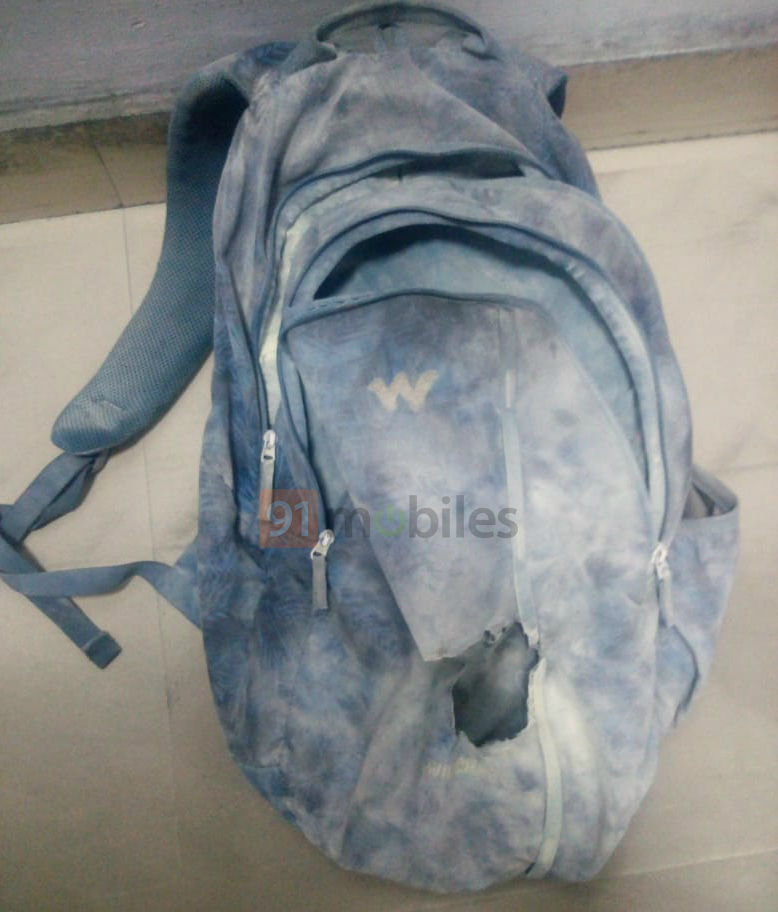 Disheartened with his new smartphone going up in flames, Kumar went to a city-based Xiaomi service centre. However, the executives tasked with helping Xiaomi customers instead tried to blame him for the blast, telling him that he was the one responsible for the blast by causing damage to the smartphone that led to the battery blast. They even measured the hole left in the bag due to the fire and the phone to make sure the fire was indeed caused by the blast. 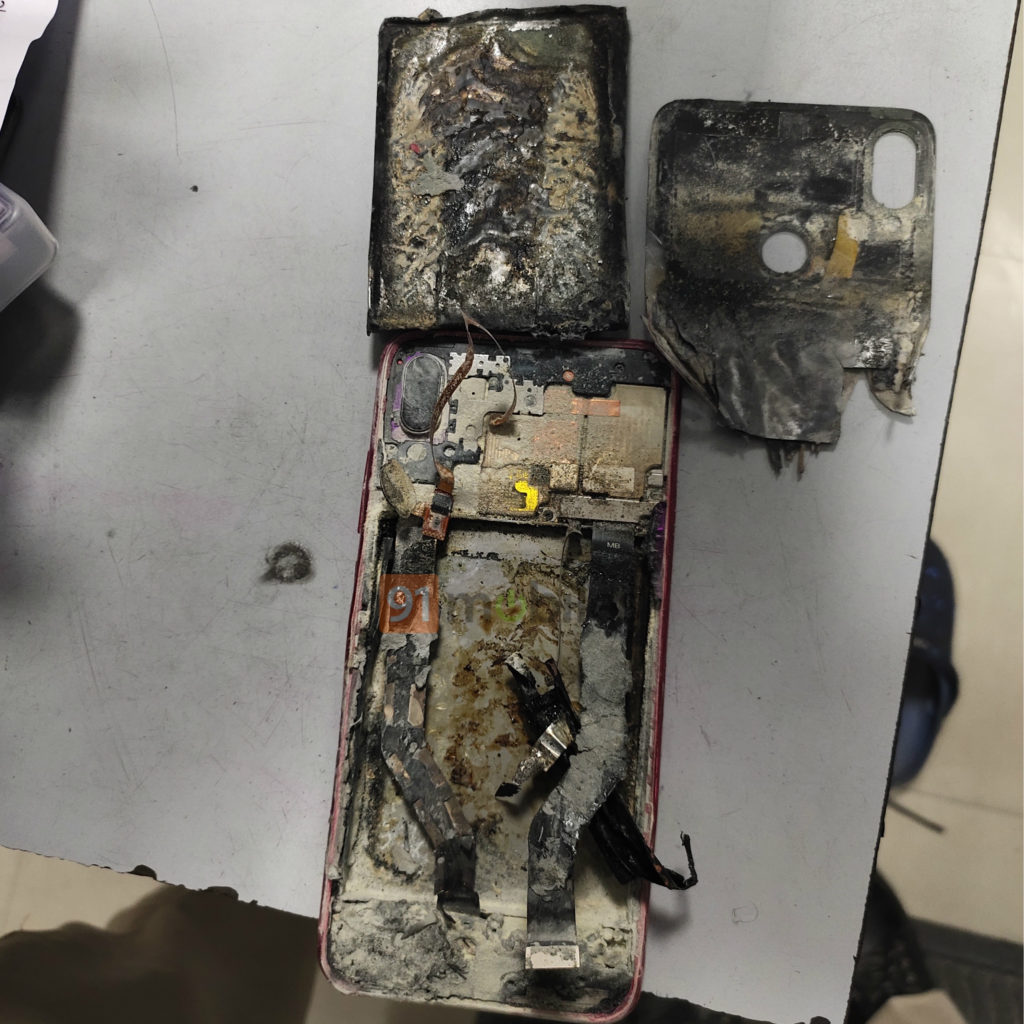 When Kumar refused to take the blame, the service centre tried to get him to pay 50 percent of the smartphone’s cost to get a new Redmi Note 7 Pro unit as a replacement. In the job sheet provided, the service centre doesn’t even mention the blast as the issue, listing ‘Power On Fault’ as the fault instead.

[Update] We reached out to Xiaomi on the matter and received an official response, which says “

“At Xiaomi, customer safety is of utmost importance and we take such matters extremely seriously. Quality of our products is a key pillar at Xiaomi and all our devices go through various levels of stringent quality tests attesting to highest standards. Our devices also have third parties validation for our standards of quality and after sales.
In this particular case, after detailed examination, it was concluded that the device was already physically damaged before it was brought to the service center. The case has been resolved amicably with the customer, ensuring full satisfaction of the consumer. We deeply care for our consumer and are providing all necessary assistance.
We take pride in having one of the strongest after-sales networks in the country with an aim to solve customer issues seamlessly.”

We have seen smartphones and feature phones exploding many times in the past, including many from Xiaomi. In a recent incident, from February this year, a Redmi Note 6 Pro unit started emitting smoke and caught on fire when unauthorized service personnel was attempting to repair it. Jio Phones, Samsung Galaxy S10 5G, iPhone XS Max, Redmi Note 4, Mi A1, and Moto E3 Power are some of the phones that have been in the news for explosions over the last few years.