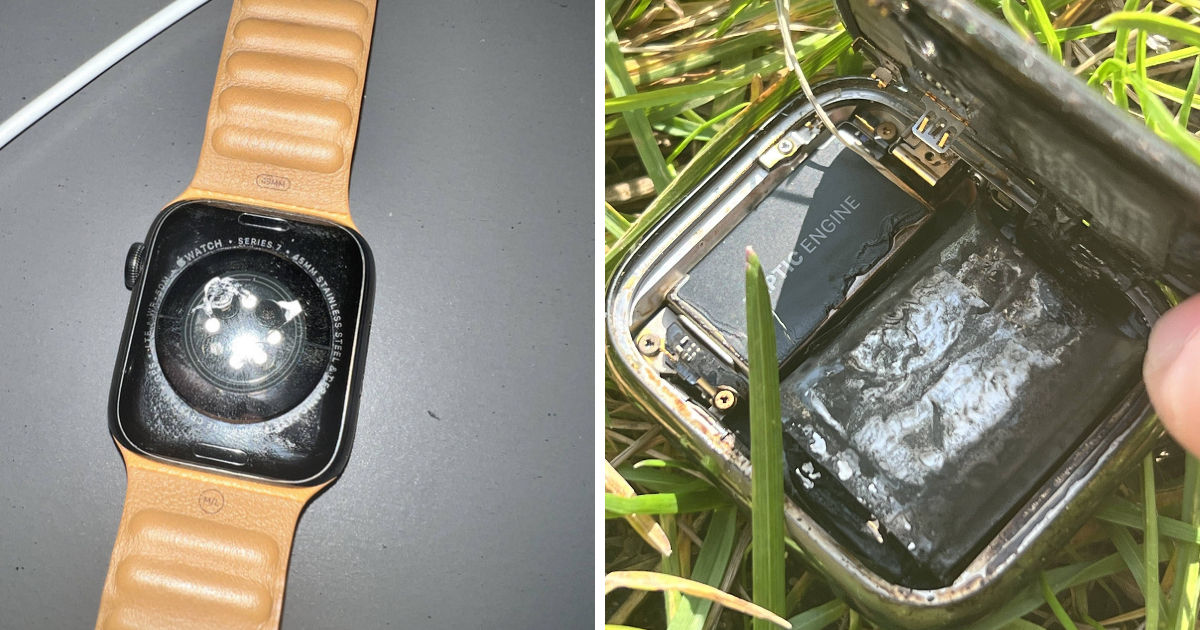 According to a report, a user’s Apple Watch Series 7 battery expanded, over heated, and eventually ‘exploded.’ When the incident was brought to Apple’s notice, the company confirmed that it will investigate the matter but the user claims Apple asked him to sign a document saying he won’t speak about the incident publicly.

In a conversation with 9to5Mac, the affected user said that he noticed his Apple Watch Series 7 heating up more than usual. Upon looking closely, the user also found out that the back panel of the Apple Watch had cracked and the smartwatch was showing a warning about needing to shut down due to the high temperature. The 9to5Mac report said that the room temperature in the user’s house was just over 70 degrees Fahrenheit (around 21 degrees Celsius).

The back panel of the Apple Watch Series 7. (Image Credit: 9to5Mac)

When the user called Apple Support to explain the situation, the call was escalated through multiple levels of Apple’s support. Ultimately, an executive created a case for further investigation. Apple Support advised the user to not touch the watch until he hears back from them.

The following morning, the situation apparently got worse. The user woke up to find the Apple Watch even hotter to the touch and the heat had shattered the Apple Watch Series 7’s display. When he picked it up to send Apple pictures, he heard cracking noises coming from the device. Soon, it exploded right when the user was throwing it out of his window, as per the user’s account.

The user claims the Watch left burn marks on his couch, and he went to hospital to determine if there had been lead poisoning after the incident. While the Apple Watch does not have enough lead that could lead to poisoning, the user was simply concerned about it.

He then reached out to Apple again to give an update on the situation. It was this time when he was told that the case would be a top priority and he would receive an update in the next few days. When the user did hear back from Apple, the company arranged a delivery pickup and said that it is taking the smartwatch to its labs for further testing.

Now, it is not yet known as to what may have caused the Apple Watch to explode. While the exact reason has not been determined yet, the Apple Watch uses a Lithium-Ion which can explode due to several reasons like a short circuit, physical damage to the battery, overcharging, using a third-party charger, and more.