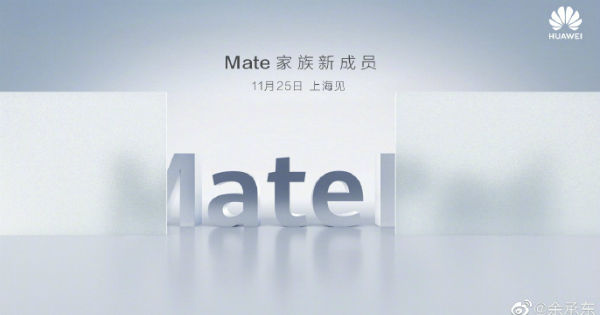 Huawei MatePad Pro tablet is confirmed to go official on November 25th in Shanghai, China. The announcement comes from Richard Yu, CEO of Huawei Consumer Business Group on Weibo. Though the teaser image posted has blurred out the text next to Mate, the ‘Pad’ wording is clearly visible. The Huawei MatePad Pro had already bagged TENAA and 3C certifications in China. This revealed the tablet will be available in two models — Wi-Fi with MRX-W09 and MRX-W19 model numbers and 4G LTE with MRX-AL09 and MRX-AL19. Last month, we had revealed the device is codenamed Marx, along with its design.

The Huawei MatePad Pro certification suggests that it would come with 40W fast-charging support like the Mate 30 phones. Renders have revealed the tablet will have a punch-hole display and dual cameras the back. The tablet is expected to arrive Blue, White, Orange and Green colour options. While it’s not confirmed, the MatePad Pro could pack a Quad HD+ display but the exact display size in under wraps for now.

It’s likely the Kirin 990 chipset might power the flagship tablet coupled with 8GB RAM and up to 256GB storage. It could come with magnetic pogo pin connector to attach a keyboard and have support for M-Pen stylus. Unfortunately, that’s all we know about the Huawei MatePad Pro tablet. Notably, the Huawei’s event is just a day (November 26th) ahead of the Honor V30 unveiling. We should learn more details about the tablet in the next few days.