After its comeback in the Indian smartphone market a couple of years back, Motorola has been able to rewrite the rules of the game by offering quality hardware at an attractive price point. It also ushered in the new era of selling smartphones exclusively online, which is now being used by most Chinese phone makers. However, one aspect that has remained pretty much the same in its devices in the past couple of years is their design language. While Moto smartphones give precedence to ergonomic comfort over construction material, the competition has came a long way. Nowadays you can get metal-clad unibody offerings even in the budget segment. 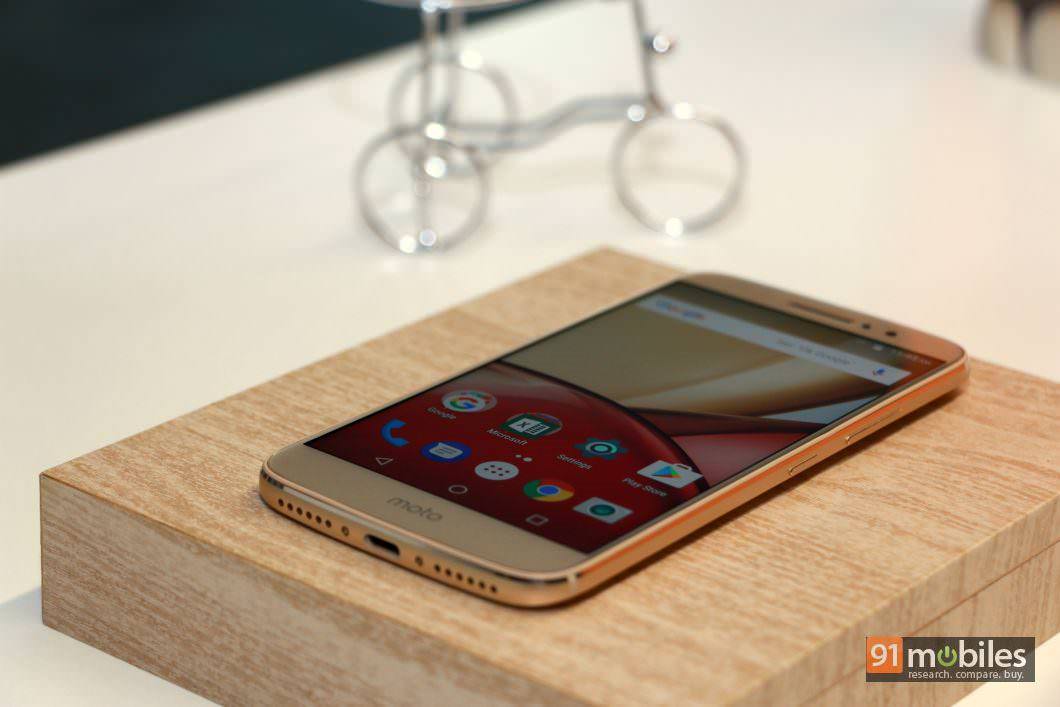 Perhaps that’s why the Lenovo-owned company decided to change its tack and introduce a new smartphone in its lineup, the Moto M (first impressions) sporting a new design made out of metal. But is that all there’s to Moto’s latest? We’ve been using the Moto M for past few weeks to find that answer. Read on to know what we think in our review.

Design and display: M for mesmerising

As highlighted in the introduction, the Moto M’s design language gives it its bragging rights. And, without a doubt, Moto scores full marks in this aspect. The brand has ensured that the smartphone can stand out from a sea of similar-looking phones, even though the construction material being used is just metal. The rounded corners and dual curves at the back give it a distinct identity. 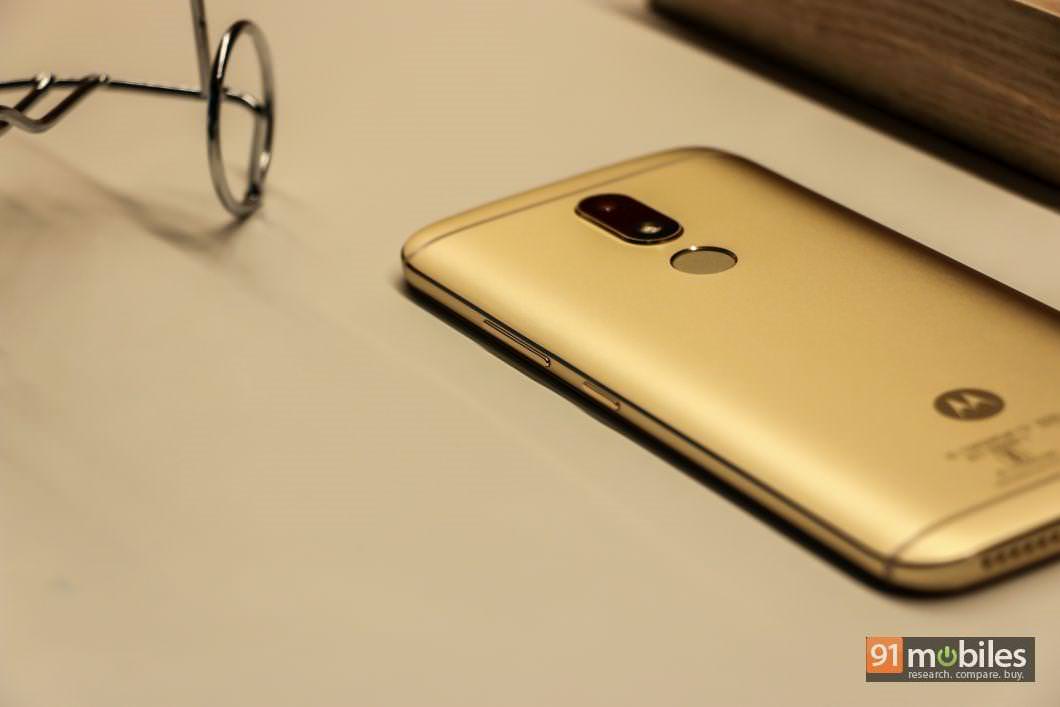 Available in flashy gold or classy grey and silver colours, the Moto M certainly grabs attention even from a distance. The fascia is quite minimal, with the display panel being the centrepiece, accompanied by an earpiece, sensor and a front-facing shooter. Like its siblings, the phone features capacitive keys for navigation, and the area below the display is simply occupied by the Moto logo. It seems like a waste of space – to put it bluntly – as there’s no purpose being solved by the logo and it also spoils the symmetry by being larger than the portion above the display. 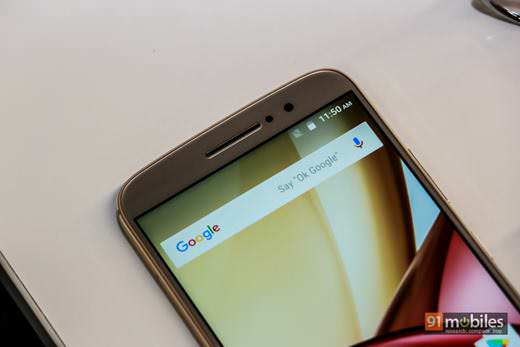 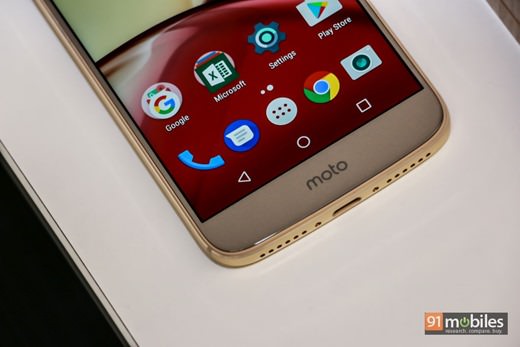 In previous Moto devices, namely the G4 Plus (review), Z Play (review) and Z flagship (review), the fingerprint scanner was placed at the front… and we’re glad that the Lenovo-owned company decided to change that. The Moto M is the first smartphone from the brand to sport a fingerprint scanner at the back. The circular reader supports 360-degree recognition and is quite accurate, unlocking the handset in a flash. 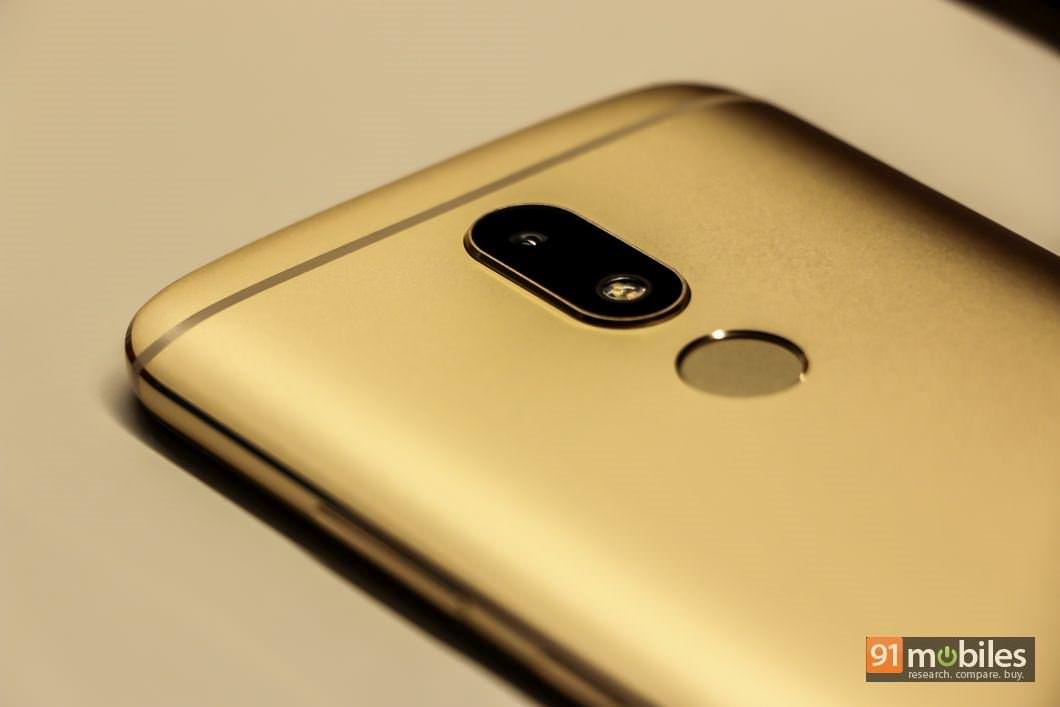 Along with the biometric module at the rear, you’ll find the primary snapper and a dual-tone LED flash placed in a vertical strip that protrudes from the body. It makes the Moto M wobbly when kept on a surface, and also makes the camera sensor prone to scratches. The antenna lines at the top and bottom break the uniformity of the design, but still manage to gel well with the overall ethos. The phone also ships with a plastic case, though we didn’t feel like using it. The phone isn’t so slippery that it warrants the use of a case, which spoils its premium looks anyway.

The placement of the other buttons and ports seems to be fairly standard, though the Moto M does mark a shift towards the next-gen USB Type-C port for charging and data transfers.

The Moto M sports a 5.5-inch IPS display bearing a resolution of 1,920 x 1,080 pixels, resulting in sharp text. The colour reproduction is also quite nice, though not as punchy. Brightness levels however, seem to be on the lower side. Even at the full brightness, we struggled to read the screen outdoors. The black borders around the display are eyesores too. Protecting the screen against scratches and minor knocks is a layer of Corning Gorilla Glass. 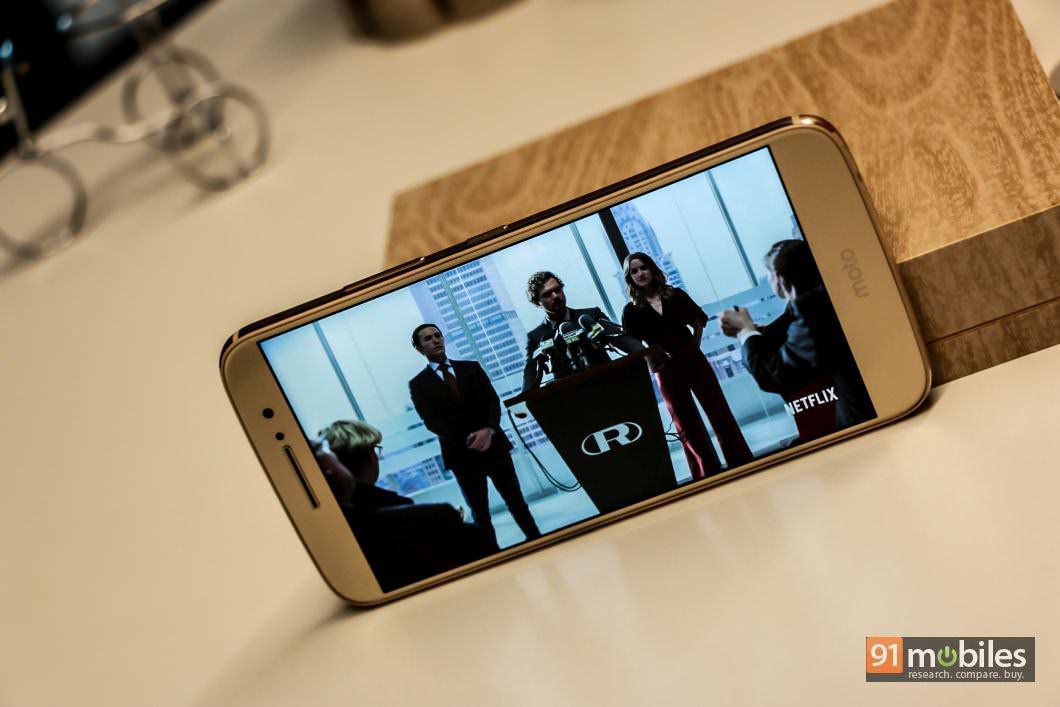 Even though it’s been a while since Android 7.0 Nougat came out, and many Moto devices have even started getting the update, the Moto M runs Android 6.0 Marshmallow. Like its brethren, the device offers a stock interface, complete with the Google Now screen towards the left and a dedicated app launcher. 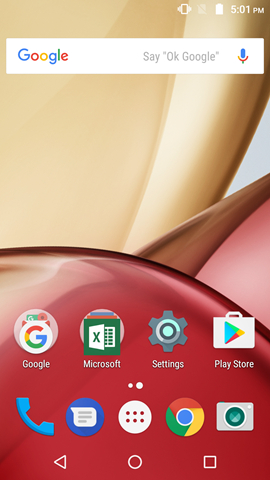 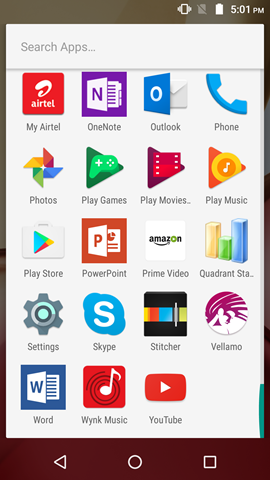 There are a few preloaded apps though, and you get an entire suite of Microsoft apps such as Word, PowerPoint, Outlook, and Skype among others. 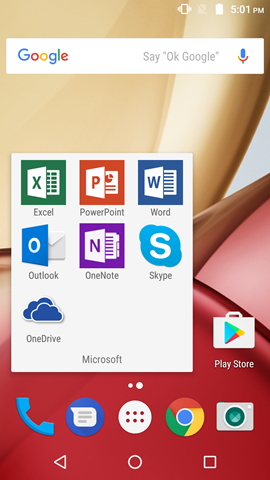 Sadly though, the smartphone misses out on something we consider a special aspect of all Moto phones – the brand’s signature software features. The Moto Display which intelligently shows notifications whenever you reach towards the Moto smartphone or take it out from your pocket, or Moto Actions which let you turn on the camera by flicking your wrist twice, toggle the flash by a double karate chop – all of these options are surprisingly missing from the Moto M. The software also doesn’t seem to be as refined since we ran into a couple of app crashes. 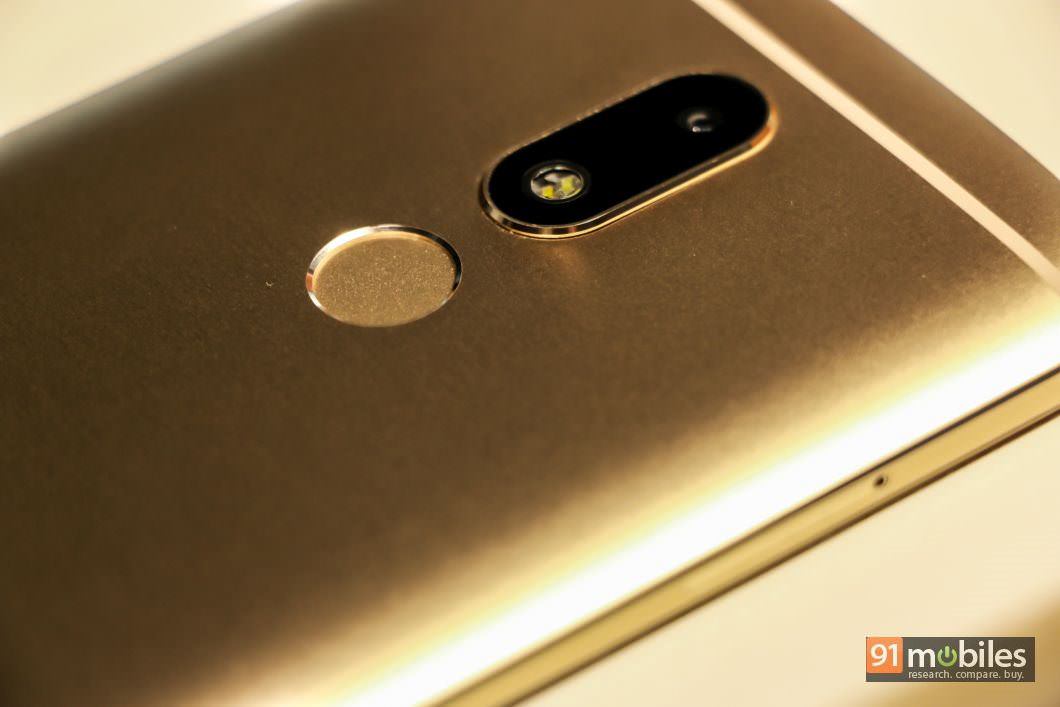 Similar to its mid-tier sibling, the Moto G4 Plus, the Moto M flaunts a 16-meg shooter at the back, which is complemented by a dual-colour LED flash. However, the similarities stop right there. While the G4 Plus still ranks among the best smartphone cameras in its segment – even months after its launch – the Moto M’s camera quality is average at best. The images show decent colour reproduction, but the sharpness and details aren’t up to the mark. The camera app however, offers a lot of options, including a Pro mode to tweak ISO levels, exposure, etc. There’s also an option of enabling various effects as well as Art Nightscape to get some additional filters for pictures. The focussing is quite fast thanks to PDAF technology, and shutter speeds are also decent. The HDR effect adds life to images though takes time in processing, and sometimes tend to overexpose the scene making it look artificial. Like most phones, the Moto M fares poorly in the dim environments, although the LED flash does come to the rescue in providing ample illumination. 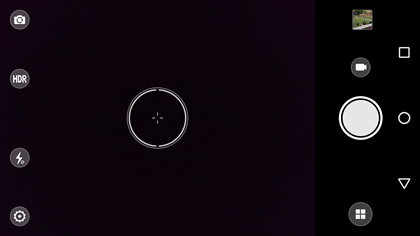 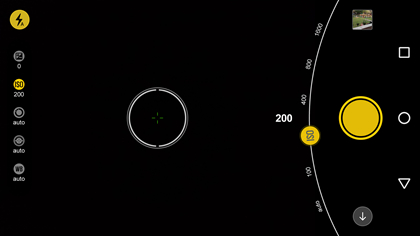 Take a dekko at the camera performance of the Moto M in the image gallery below.

In terms of the videos, the smartphone can capture full HD videos, and not 4K, which is odd considering most budget devices have started supporting it. The video recording also seems to be average and the lack of optical image stabilisation is apparent. For selfies, the 8MP sensor at the front fails to change our opinion about the camera aspect of the Moto M. The colours are captured well, but the images are quite noisy. You do get screen flash for shooting in poorly-lit environments however.

Performance: M for marvellous, for the most part

As mentioned in our hands on, Moto seems to be changing under Lenovo’s umbrella, and the hardware section is one of the biggest places where this change can be seen. Instead of a Qualcomm chipset, the Moto M utilises MediaTek’s P15 octa-core SoC. It offers four high-power cores running at 2.2GHz, while the low-power cores are tuned at 1.8GHz. Not just in specs, but in the usage too, the processor is quite capable. Be it for basic tasks or high-power apps, it was able to handle everything quite well. However, MediaTek chipsets fare poorly in the graphics department, and the same was the case with the Moto M too. While casual titles such as Dan the Man ran flawlessly, off-roading in Asphalt Extreme wasn’t as pleasurable as it could’ve been. 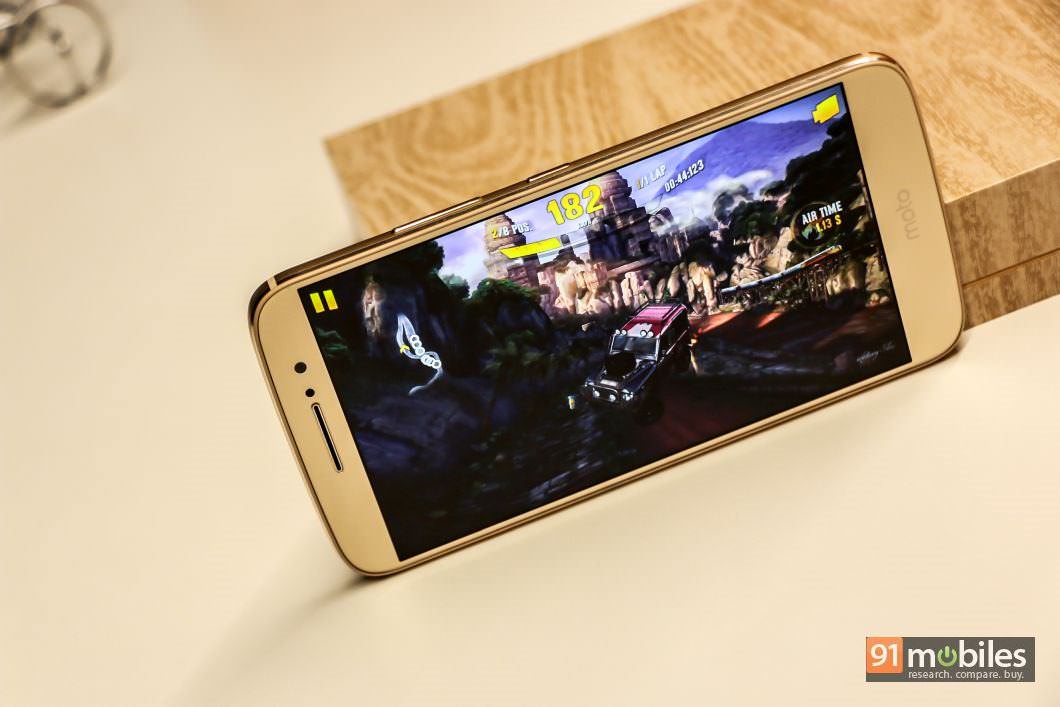 The multitasking is impressive though, thanks to the inclusion of 4GB of RAM on our smartphone. The Moto M is also available in a moe affordable variant with 3GB of RAM. For storage, the device comes with 32GB or 64GB memory on board depending upon the model you choose. In our unit, around 53.5GB space was available for storing files and multimedia content. 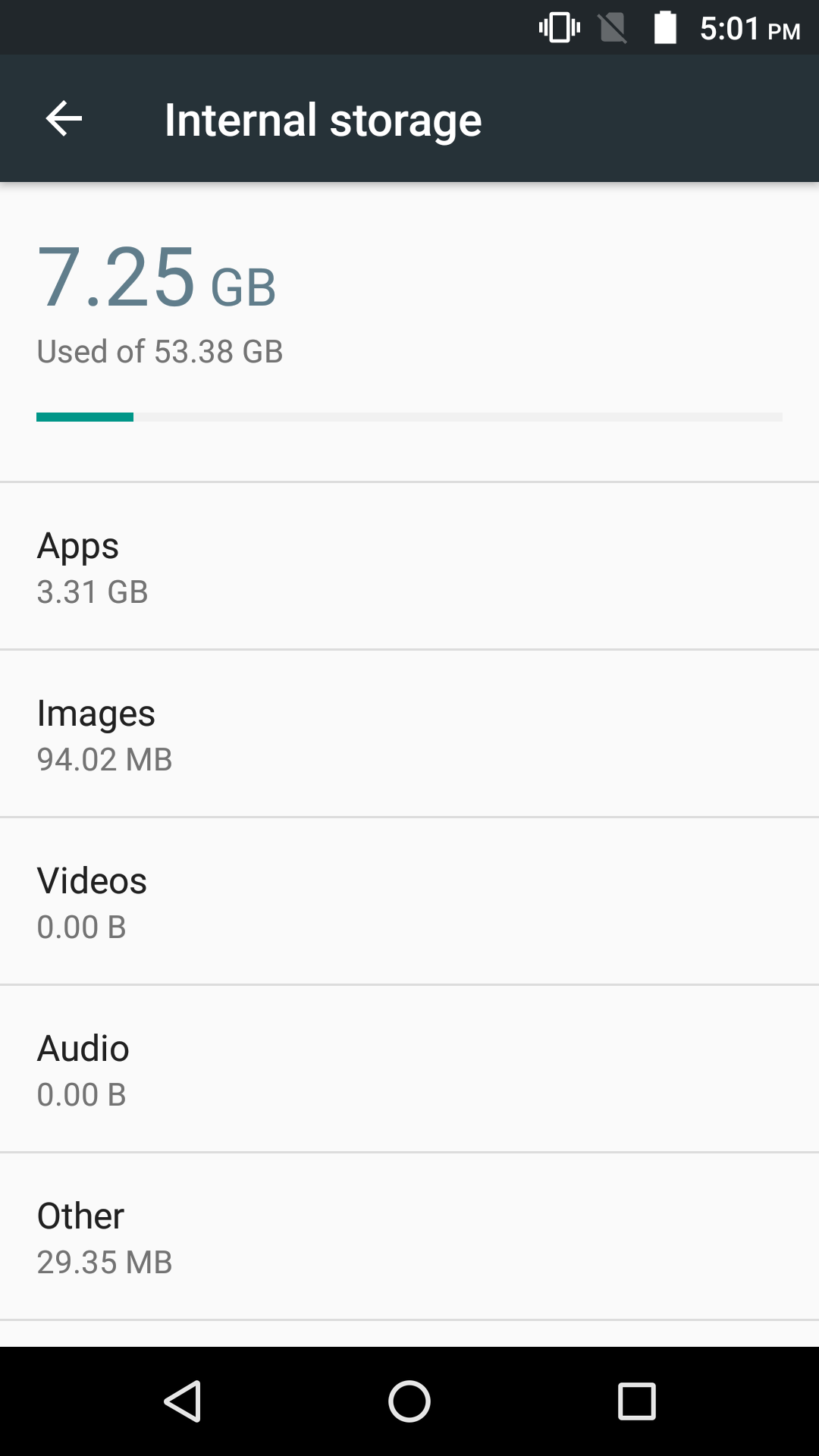 Tasked with keeping the phone running is a 3,050mAh battery, which does the job just fine. The Moto M is able to last a day usually, with mixed usage of calls, internet surfing and some intermittent gaming or navigation. In our battery loop test, the device lasted for around nine hours and 30 minutes while running a 720p video with both the brightness and volume levels set at 50 percent level. The battery life is good, although it goes without saying that the competition in this segment is miles ahead by packing as much as 4,000- or even 5,000mAh batteries.

The dual-SIM smartphone features a hybrid slot and supports 4G VoLTE, Bluetooth, and GPS. Being a Moto device, the call quality is exceptional and both sides are able to hear each other properly.

While the Moto M doesn’t have stereo speakers, the single unit at the base offers powerful and crisp sound.

If you’ve been following our review, then you won’t be surprised when we say that the Moto M generates mixed feelings. While it seems to have taken care of some of the important aspects such as design and performance, it has also missed out on features that make a Moto smartphone distinct, be it the camera or software – and that’s a big red flag against it. 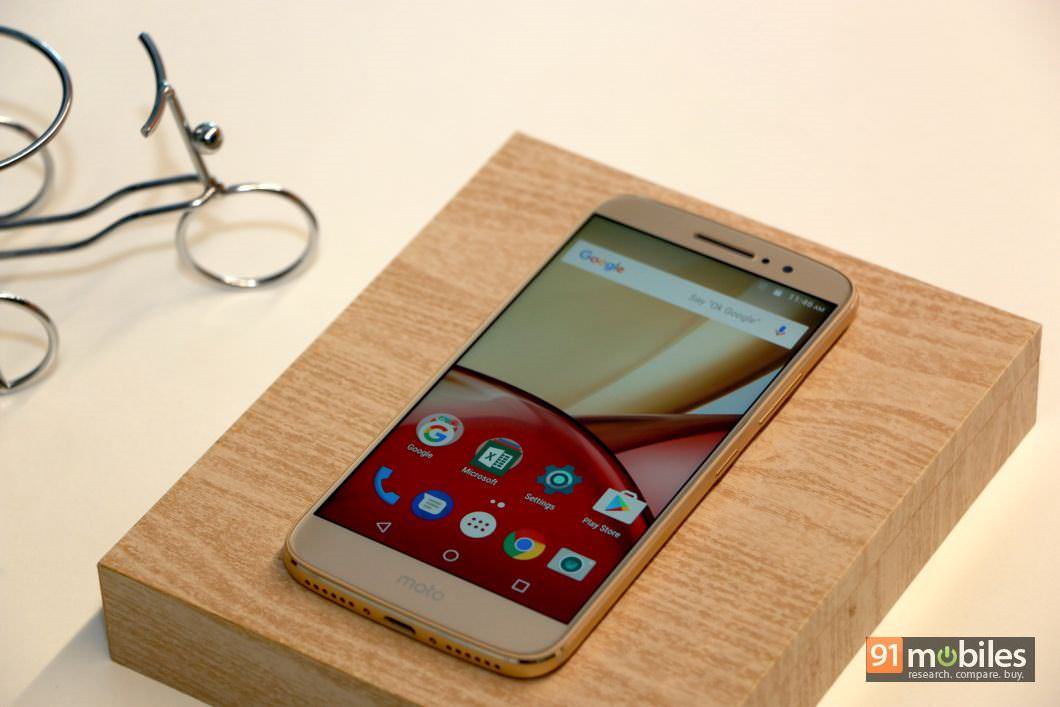 Don’t get us wrong. The Moto M is a good device, but the competition is much better, and of course, our expectations are usually higher from a device from the iconic brand’s stable. For the specs it offers, the pricing seems to be on the higher side – Rs 15,999 for the 3GB RAM model, and Rs 17,999 for the 4 gig version. Devices such as the Xiaomi Redmi Note 4 (review) are priced significantly lower, yet seem to be better buys. Forget competition from other brands, the Moto M faces rivalry from its own family itself – the Lenovo P2 (review) is an excellent battery monster, while the Lenovo Z2 Plus (review) is the most affordable phone with the flagship-level SD820 chipset. In fact, in our opinion, the Moto G4 Plus, priced at Rs 14,999 comes across as more bang for your buck. The 4GB flavour of the Honor 6X (review) is also a great choice, especially due to its dual cameras.

If you’re keen on getting the Moto M however, our suggestion to you would be to wait a little longer for the Moto G5 Plus, which as per the rumours, will feature a revamped design language and impressive spec sheet for a sticker price of around Rs 15,000.

Related read: What to expect from the Moto G5 Plus