At MWC 2019, Nokia’s booth probably attracted the biggest crowd. But this time around it wasn’t for a feature phone that was refreshed unlike previous years. Instead, it was for the Nokia 9 PureView (first impressions), the world’s first smartphone with five rear cameras. While the handset deserves all the attention it got, I believe it’s the affordable Nokia 3.2 (first impressions) and 4.2 (review) smartphones that could find more takers. While we have already reviewed the Nokia 4.2, now is the time to take a look at the more affordable of the two, which interestingly is actually bigger (in terms of the display). So what does the Nokia 3.2 bring to the table? Is that enough to stave off the cut-throat competition in the sub-Rs 10k segment? Well, I have been using the handset for more than a week, and I believe I have the answers… 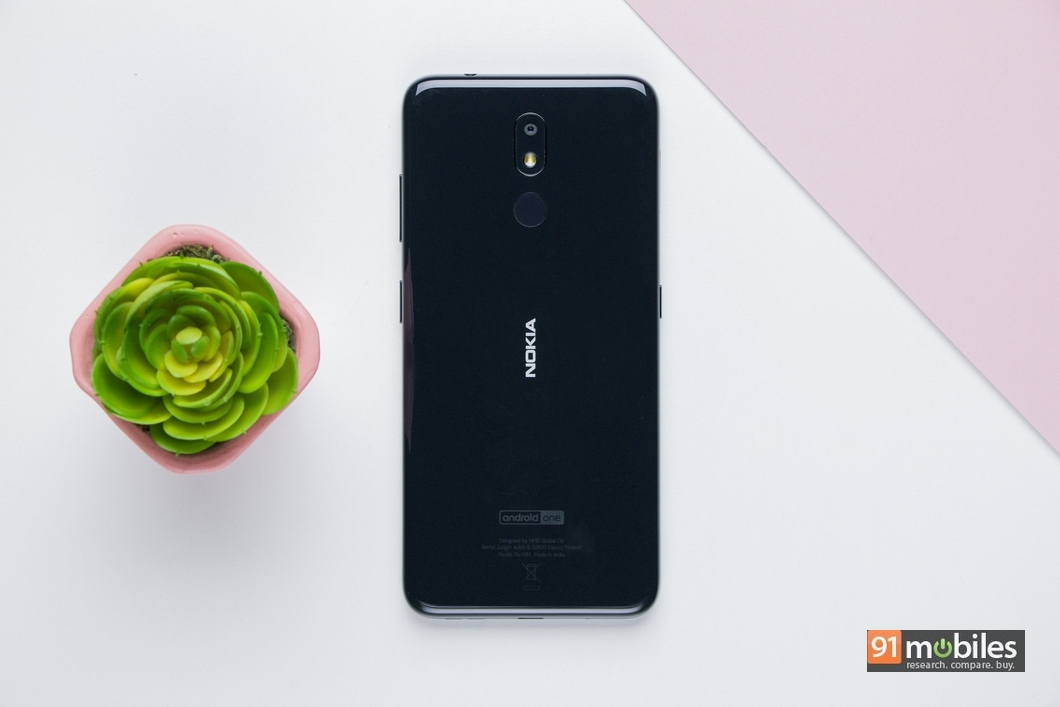 If you look at the current crop of budget smartphones, diamond patterns, gradient hues and glossy mirror finishes are the order of the day. While it’s difficult to tell one smartphone from another in this segment, the Nokia 3.2 manages to stand out by being too plain, which works in its favour (maybe?). The solid marble slab-like construction also comes across as a breath of fresh air in comparison to flashy smartphones. Despite being carved out of polycarbonate, the Nokia 3.2 has a good confidence-inspiring heft to it. While I have the sedate black colourway, Nokia is also offering the phone in a steel hue. 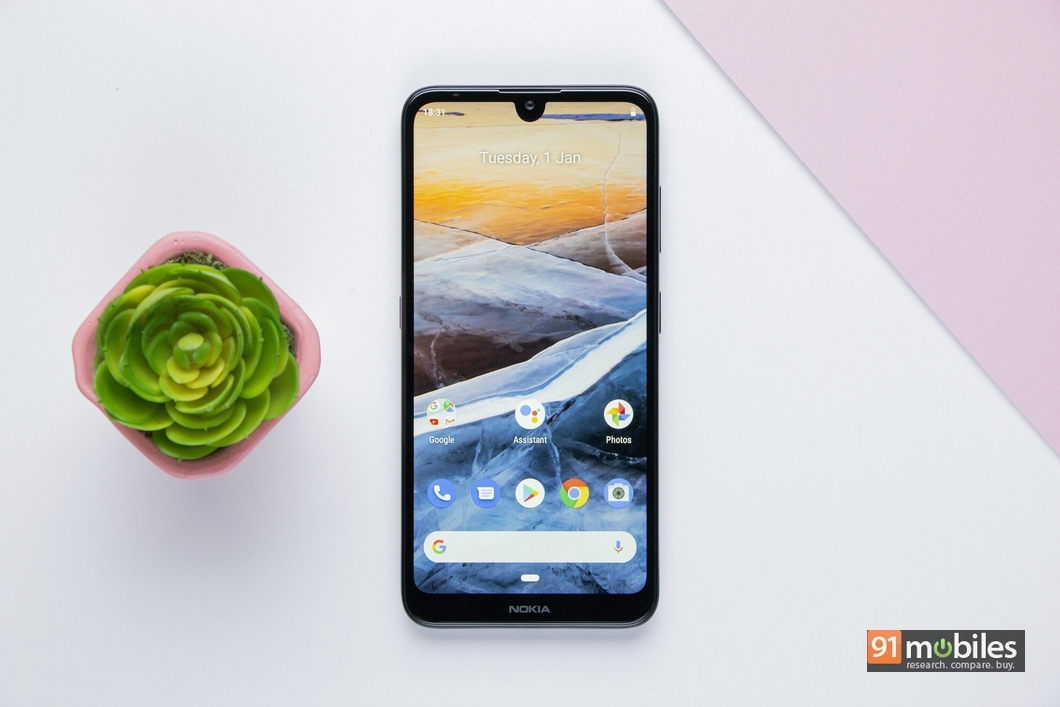 The Nokia 3.2 borrows the same design cues as its elder sibling, the Nokia 4.2. That means you get an easy-to-spot LED notification light integrated into the side power button. The other elements, including the dedicated Google Assistant button, volume keys, a 3.5mm audio socket and a micro-USB charging port are placed at the same location. The circular fingerprint scanner is located conveniently below the camera module and I didn’t have any issues locating it by feel alone. However, some might miss it because of its flat profile, which is only slightly recessed into the back panel. The scanner is pretty fast and accurate, however. Sadly, I can’t say the same for the face unlock as it takes a second or two to register your face and let you access the phone.

Just like the 4.2, the Nokia 3.2 flaunts a display with a waterdrop notch, being referred to as the Dot Notch. Unlike the compact footprint of its brother, the 3.2 is meant for multimedia lovers. Its hashtag “#viewmoredomore” refers to the massive 6.26-inch display, which bears a resolution of 720 x 1,520 pixels. 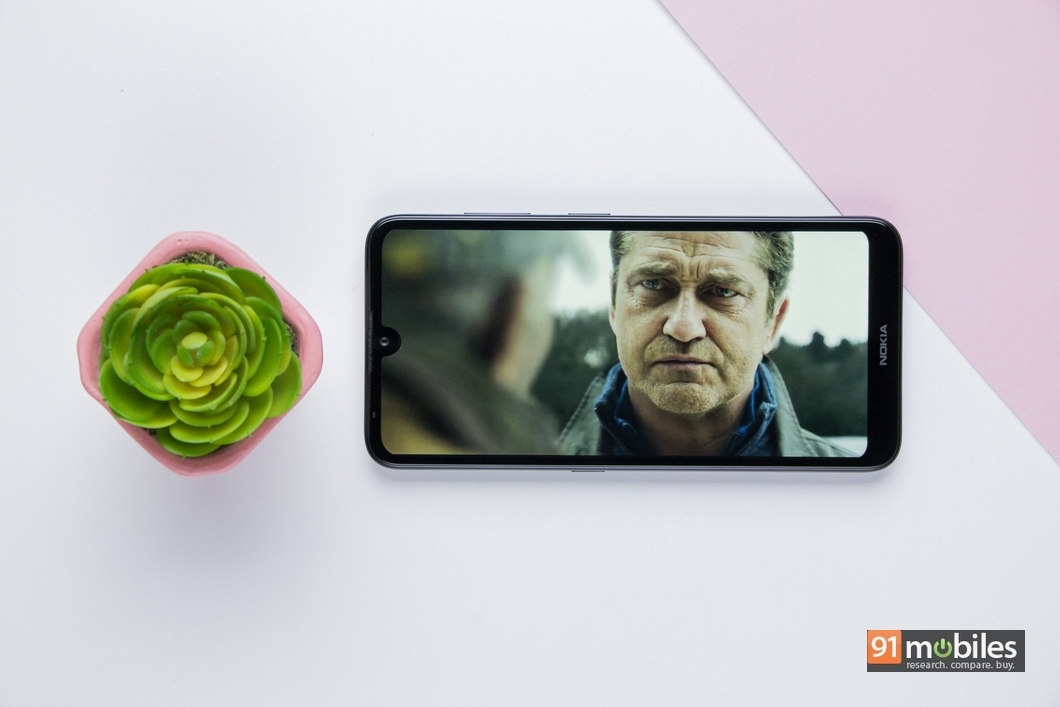 While the company has increased the size of the display, it has also retained the bezels and as a result, you need to perform some finger acrobatics to reach the top corners. Add to that the slippery back, and you have more chances of dropping the phone than reaching the top edge of the display. As for the display itself — even though it’s not an AMOLED panel — the colour production, brightness and viewing angles are commendable. Lest I forget, the smartphone is missing Widevine L1 support, which means despite being an HD+ screen, the display will be unable to stream content on popular platforms like Netflix and Amazon in HD. 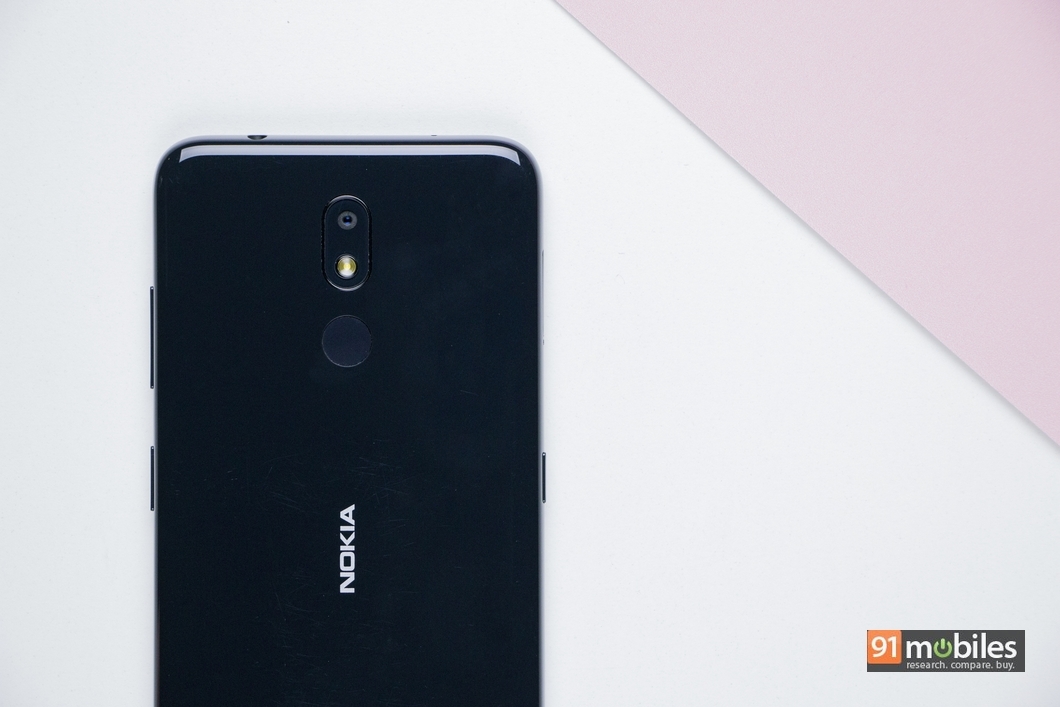 While the Nokia 3.2 borrows design elements from its sibling, on the camera front it is missing a secondary shooter. The smartphone features a single 13-megapixel shooter with LED flash. For selfies, the dot notch on the front houses a 5-megapixel snapper. Since the Nokia 3.2 is an Android One device, the camera interface is pretty straightforward. You will find selfie toggle, shutter button and preview gallery in that order from left to right at the bottom. Above that is the mode selection grid button, photo, video and beauty mode buttons. Up top, you will see the settings menu, self-timer, HDR and flash toggle.

As for the real-life performance, during my time with the phone, I mainly shot with HDR on and I must say I am happy with how the images turned out. That being said, while the pictures are a delight to look on the phone display and should suffice for social media, they are not so great while pixel peeping on a computer. The shots captured in broad daylight turn out very nice with excellent colour reproduction and a high level of details, but the same is not present when you are capturing in low light or close-ups. Since there’s no dedicated depth sensor, the smartphone doesn’t have portrait mode. However, if you get close to a subject and manually focus by tapping on the screen, you get a pseudo bokeh effect that looks passable. As for selfies, it’s the same story — you can get good images when you have ample light, but the 5MP sensor struggles in less-than-ideal lighting conditions.

Now it’s time to let the pictures do the talking, so embedded below is the gallery of Nokia 3.2 camera samples.

As for videos, the Nokia 3.2 is capable of capturing at 1080p, which isn’t bad by any means but there are other smartphones in the same range that offer the ability to record at 4K, such as the ASUS ZenFone Max M2 (review). Additionally, there’s no support for slow-motion video recording, which you can find on the likes of the Redmi Note 7 (review). Overall, the 3.2 is a decent shooter, but there are better camera phones available in its price bracket.

At the beginning of this review, I mentioned how Nokia manages to distinguish itself from the likes of Realme and Redmi with its subtle-yet-solid design. The Nokia 3.2 also stands out in terms of performance, but this time by the virtue of being underpowered. Both aforementioned brands have recently launched smartphones equipped with Qualcomm Snapdragon 6XX series or equivalent chipsets. Therefore, it surprised me to see that Nokia 3.2 has Snapdragon 429 chipset ticking at its core. I have the 3GB + 32GB variant with me, which performed relatively well except for a few jitters every now and then. However, the mileage might vary for those who opt for 2GB + 16GB variant of the phone. On the storage front, the 32GB model offers 19GB out of the box, which can be further expanded up to 400GB. 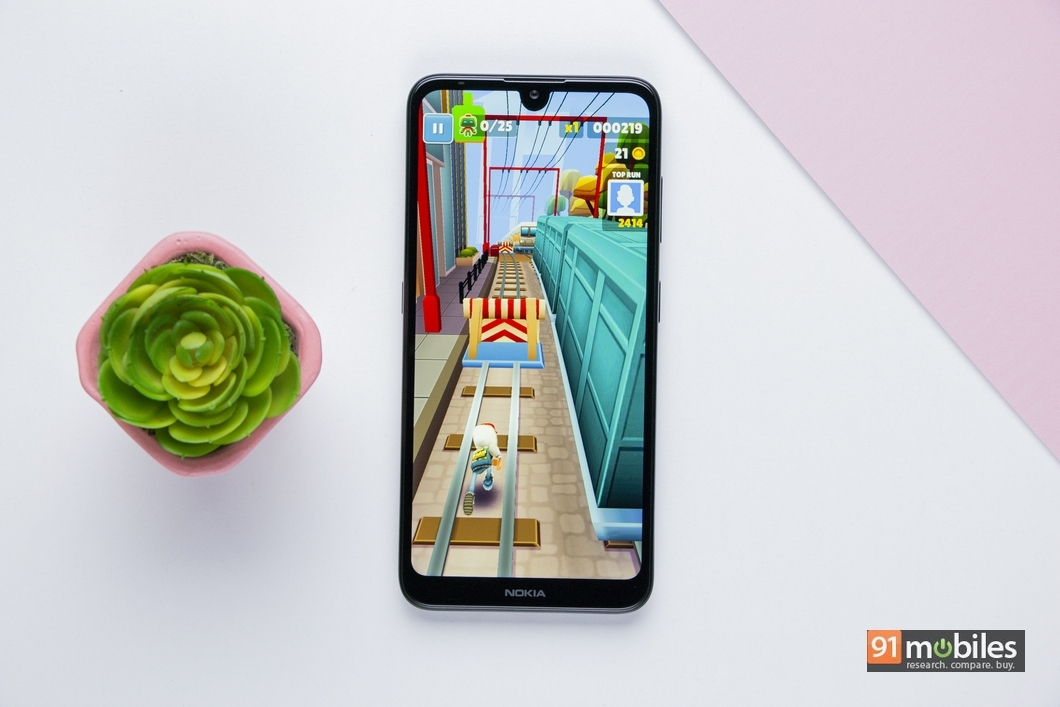 To put the smartphone truly through its paces, I decided to play a game of PUBG and my favourite title — Asphalt 9. But as the spec sheet suggests, the Nokia 3.2 struggles in both games and the gaming experience is less than ideal. One can play basic games like Subway Surfers and Shadow Fight 3 reasonably well though. Clearly, if you are a mobile gamer who takes Pochinki seriously, this isn’t the device for you. However, for day-to-day usage, the smartphone performed decently, although the app-opening times is quite considerable.

On the software front, the Nokia 3.2 boots Android 9.0 Pie in its stock avatar. What this means is that you get the whole bag of Google goodies like Google Pay, Google Lens, gesture-based navigation, Adaptive Brightness, Adaptive Battery and Digital Wellbeing.

In the battery department, Nokia 3.2 is packing a beefy 4,000mAh cell, which ensures that you can use the phone to binge watch your favourite shows and movies for hours. During my time with the phone, I managed to get a screen-on time of 4.5 to 5 hours with extensive gaming and streaming videos off YouTube, which is pretty good. Sadly however, the device takes forever to charge as there’s no fast charging support.

To summarise, the Nokia 3.2 has four things working in its favour — a solid build, large display, beefy battery and offline availability. It’s pretty evident now that the Nokia 3.2 could be an ideal phone for users who simply want a no-frills daily driver. A large screen, HD+ resolution that’s easy on the battery and massive 4,000mAh cell is an ideal mix for this very purpose. 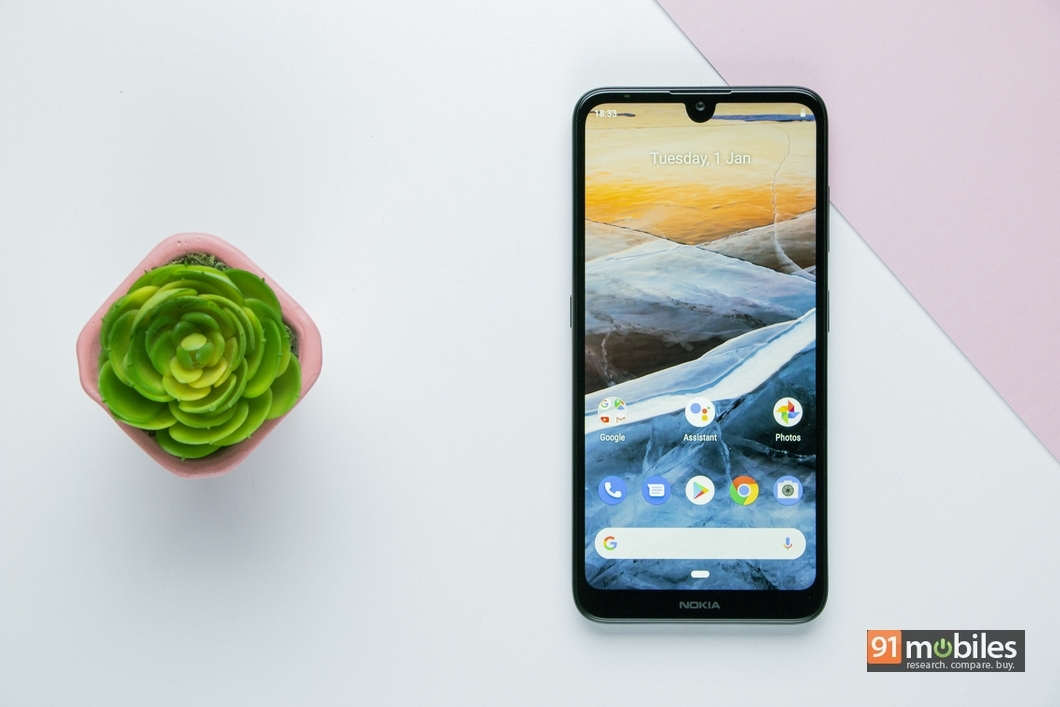 However, if you are looking for a device that can handle intensive tasks and PUBG sessions, I would suggest you look elsewhere. With a price tag of Rs 8,990 for the base variant, the Nokia 3.2 goes up against the likes of the Realme 3 (review) and ASUS ZenFone Max M2. Things become even more difficult if you are considering the 3GB RAM model that retails at Rs 10,790, as there are some compelling options such as the Xiaomi Redmi Y3 (review), Samsung Galaxy M20 (review), Redmi Note 7S (first impressions) and Realme U1 (review). 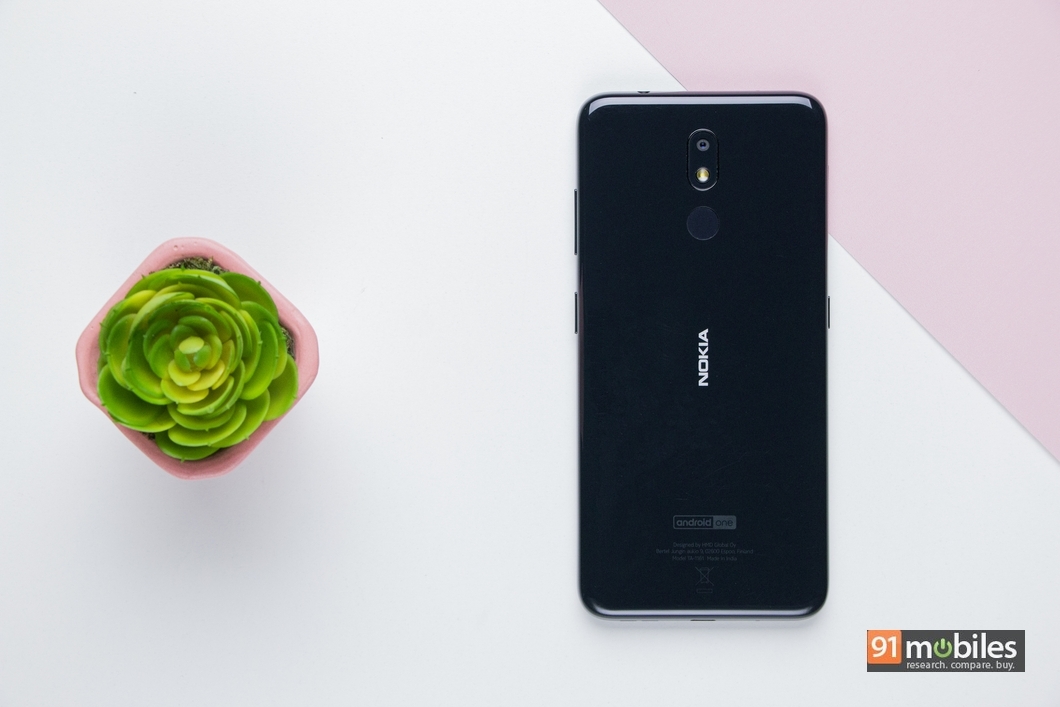 To answer the questions I asked in the intro, the Nokia 3.2 does little to compete with the rivals. Having said that, if you are looking for a large-screened, no-nonsense Android phone with the promise of updates for the next two years that can be purchased from a neighbourhood retailer, then the Nokia 3.2 fits the bill.