In the last two months, a new device from HMD Global carrying the model number TA-1157, has been spotted at the FCC and Russian certification sites. The model is thought to belong to an upcoming budget smartphone called Nokia 3.2. The phone will be the successor of the Nokia 3.1 and will most likely be unveiled at the Nokia event scheduled for February 24th. A device with the same model number has now been spotted on the Wi-Fi Alliance website.

The TA-1157 approval certification reveals that the phone supports 2.4GHz Wi-Fi and runs Android 9.0 Pie OS. Since this is an approval for Wi-Fi, no other details were revealed in the listing. 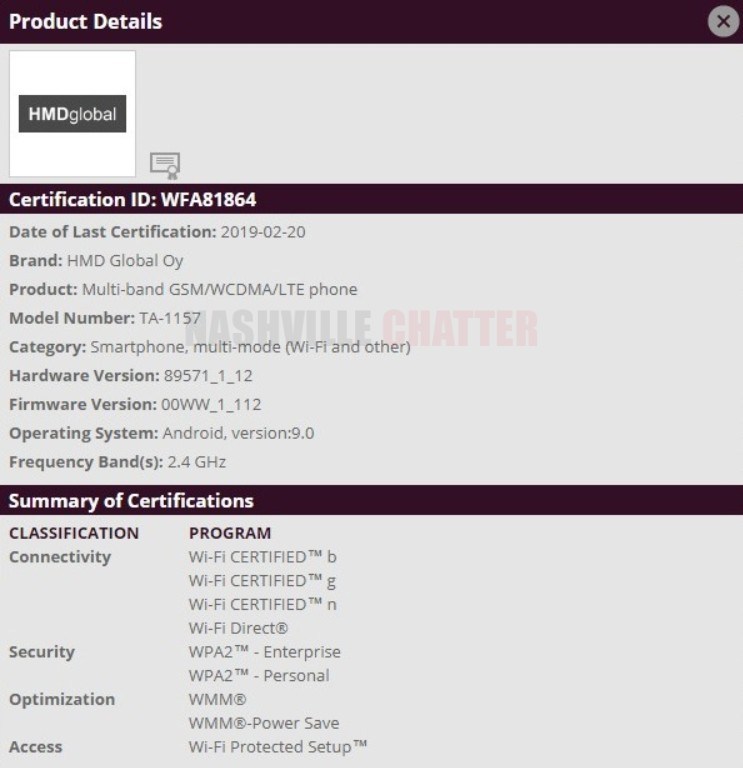 The model number TA-1157 appears to be a variant of TA-1150. This phone had also appeared on the FCC and revealed some of its specifications. As per the FCC certification, the Nokia TA-1157 and TA-1150 are both Android One devices and will be available in two configurations. The base variant will come with 2GB RAM and 16GB of onboard storage, while another variant will feature 3GB RAM and 32GB of storage. The phone will include a 3,000mAh battery, Bluetooth 4.2 and NFC support.

A diagram of the phone also revealed that it would have a dual-rear camera setup and a fingerprint scanner at the back. It will be available in both single SIM and dual SIM variants as well. The features of the phone are reminiscent of the Nokia 3.1, which is an affordable Android One smartphone. It featured a 5.2-inch HD+ display, up to 3GB of RAM, 32GB storage, a single rear camera, MediaTek MT6750 and a 2,990mAh battery. This new phone seems to be an upgrade to the Nokia 3.1, hence the Nokia 3.2.

As per a recent tip from leakster Ishan Agarwal, HMD Global will be launching up to three new phones alongside the Nokia 9 at MWC 2019. The new devices could include the Nokia 3.2, Nokia 1 Plus, and a Nokia 4.2/6.2. We will have to wait a few more days to find out for sure!