‘It ain’t about how hard you hit, it’s about how hard you can get hit and keep moving forward’ – a quote from the 2006 movie Rocky Balboa is being exemplified by the Finnish giant Nokia. Back in the day, Nokia used to be the top dog in the smartphone industry, but things changed quite drastically later. Now operating under the helm of HMD Global for a little over a year now, the brand has once again become a force to be reckoned with in a short span of time. The company’s 2018 smartphone lineup is arguably its strongest ever, with the brand offering a variety of handsets at different price points. 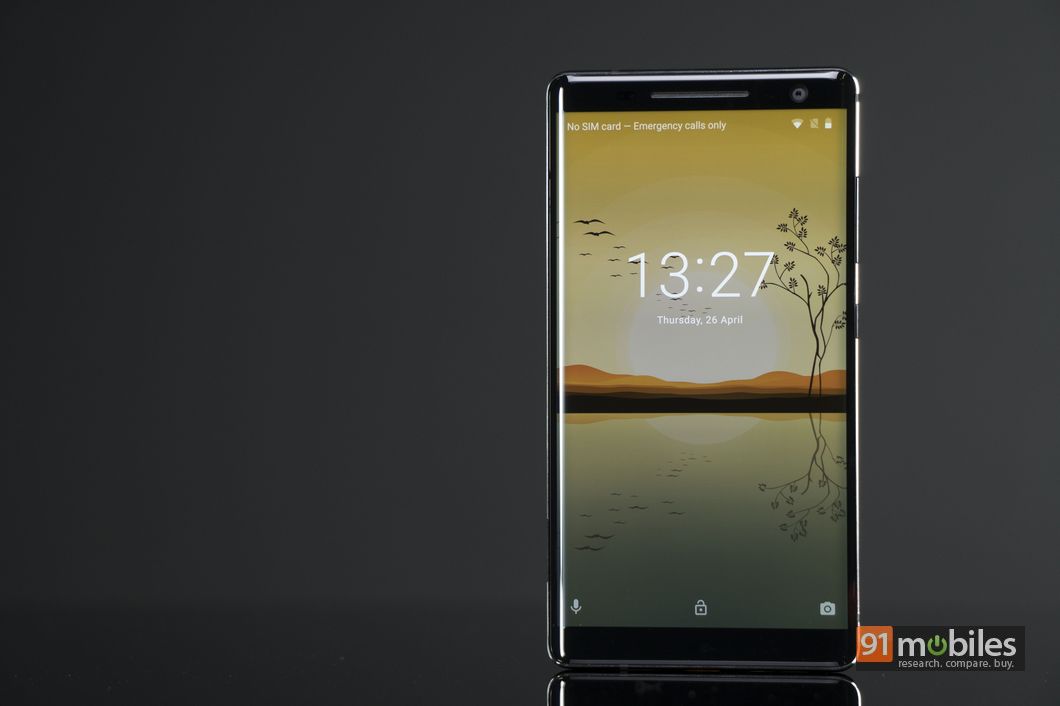 We’ve already reviewed the premium mid-ranger from the company – the Nokia 7 Plus –and were mighty impressed with what the device had to offer. In this review, I’ll be walking you through the ins and outs of the Nokia 8 Sirocco, which is the company’s latest flagship offering. Can the smartphone outshine the competition to find a place in your pockets? Let’s find out. 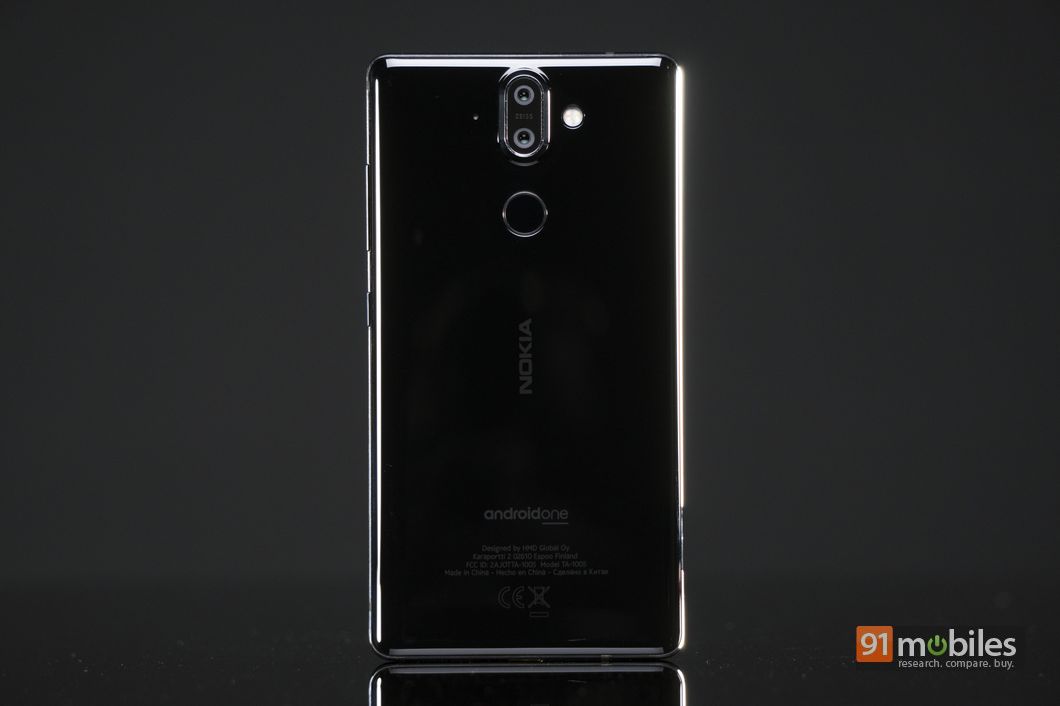 The Nokia 8 Sirocco comes as the successor to the Nokia 8 (review) which was launched last year. Since the current-gen flagship is also an ode to the Nokia 8800 Sirocco which was announced over a decade ago, the company has used exotic materials in the construction of the device – and it shows. I got the jet black variant of the smartphone to review, and for any manufacturer struggling to nail the colour black, take some cues from Nokia. The handset has the finest black coating I’ve ever seen on a mobile device and after using it for a few weeks, I am convinced that the handset will age well, provided you don’t drop it every other day. Moving on, the Nokia 8 Sirocco flaunts an all-glass design which is held together by a slim metal trim. 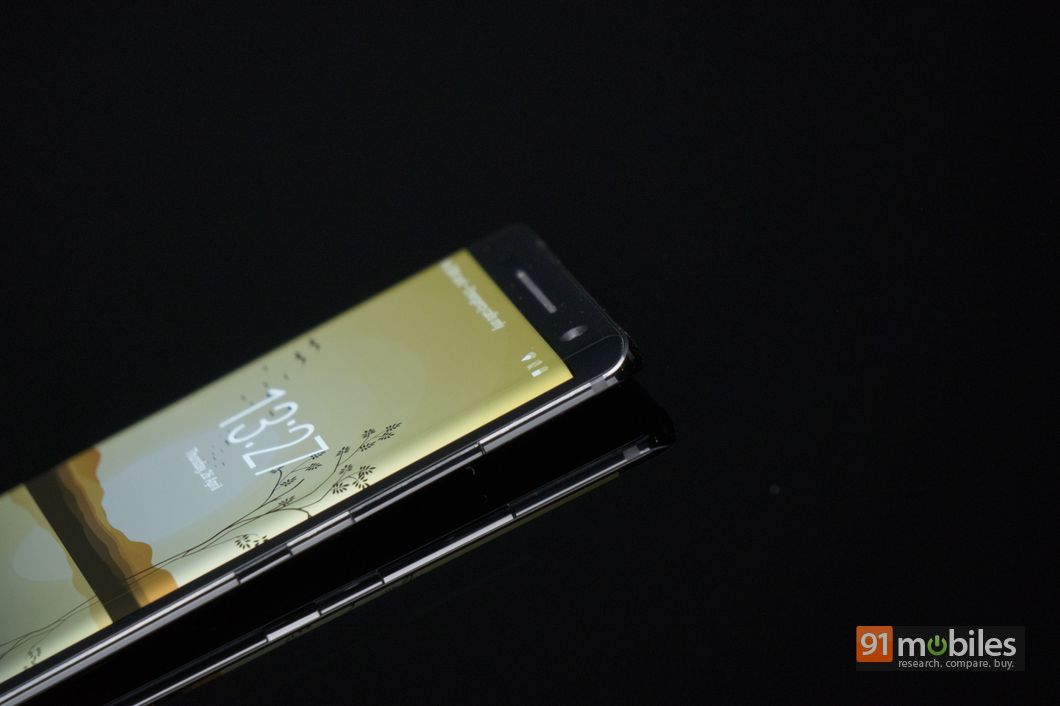 And by slim, I mean ‘razor-sharp, will bite your hand if you use it without a case’ slim. While the smartphone’s sleek girth of 7.5mm does wonders for its overall look and appeal, it makes the device a little uncomfortable to hold. Furthermore, the handset’s power button and volume rockers sit flush with the side, which makes it quite difficult to unlock the smartphone just by feeling the chassis. The same goes for the handset’s fingerprint sensor too – it’s quick and responsive, but if you’re using the phone without a case, then you won’t be able to identify it just by placing your finger on the back of the device. As a matter of fact, after having used the handset for over a week, I still struggle to unlock the smartphone in one go sometimes. 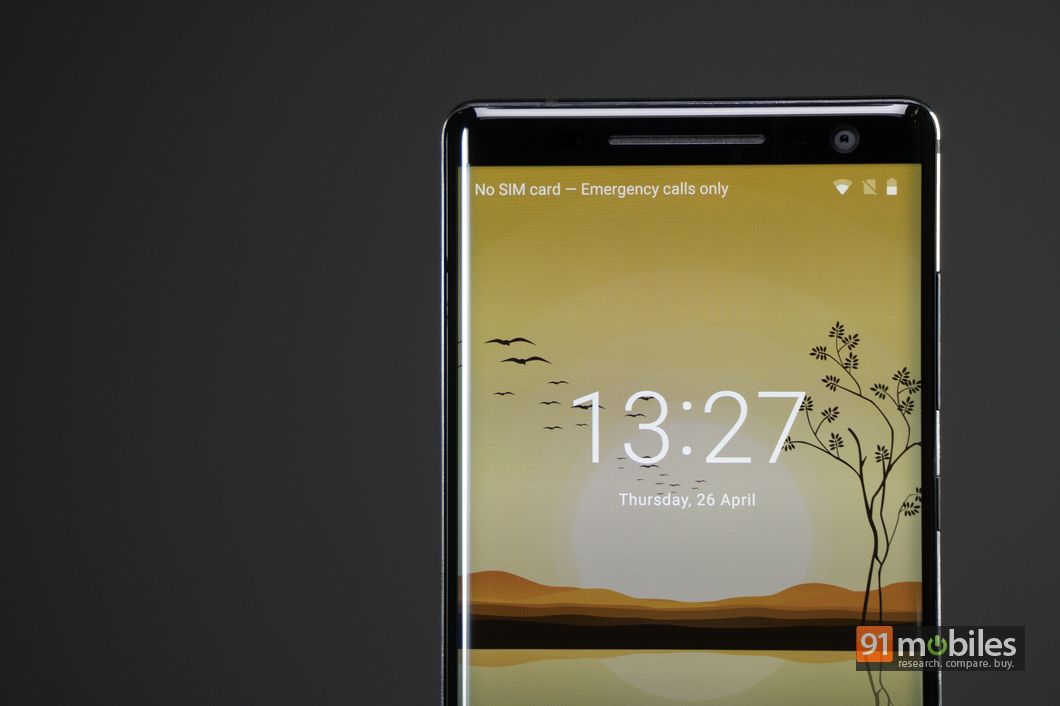 Here’s the thing though – I am willing to overlook these minor quirks because of how gorgeous the Nokia 8 Sirocco is. You even get IP67 certification with the smartphone which makes it impervious to damage from water and moisture, even if you accidentally dunk it in a pool. You also get support for wireless charging, thanks to the smartphone’s glass back and compared to last year’s model, the Nokia 8 Sirocco looks and feels like a proper flagship device too. Everything considered, I feel that buyers looking for a good-looking flagship smartphone will find a lot to like about the Nokia 8 Sirocco. 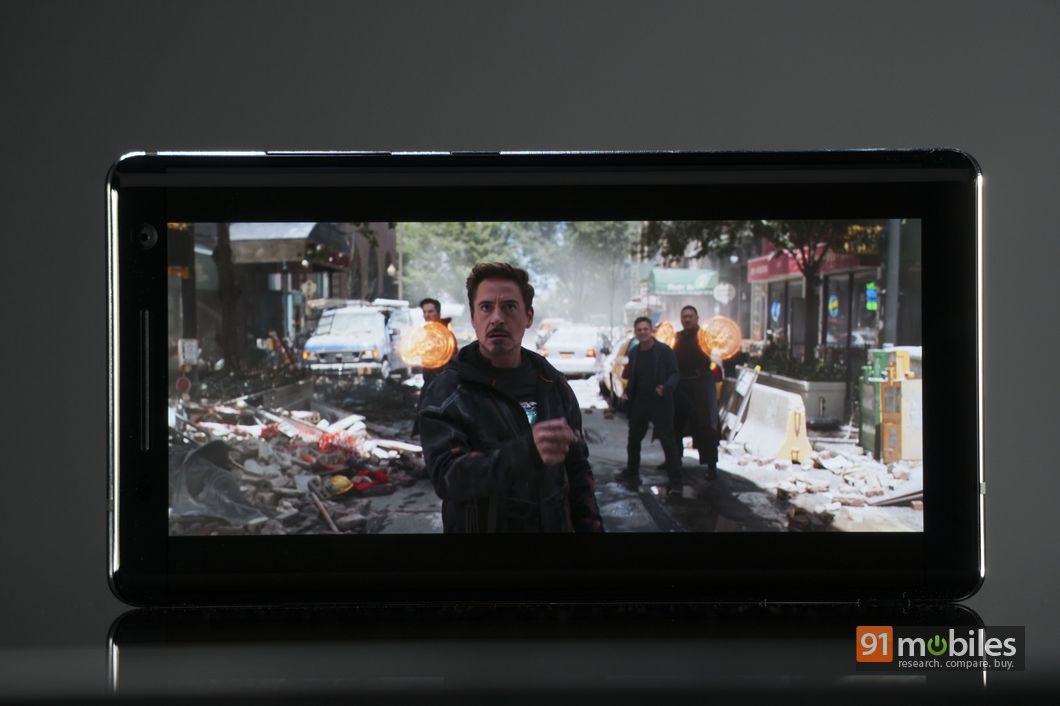 The display on the Nokia 8 Sirocco is arguably its best and its worst feature. It’s a dual-curved 5.5-inch p-OLED panel which bears a resolution of 2,560 x 1,440 pixels. Unsurprisingly, the display is crisp, has satisfactory brightness levels and boasts really dark blacks. Moreover, I quite like the approach Nokia has taken with the smartphone’s bezel-less design and instead of opting for an 18:9 aspect ratio display, the company has stuck with the traditional 16:9 aspect ratio panel. As a result, the screen on the Nokia 8 Sirocco is wider than what you might get with most flagships. This allows you to watch videos without having black borders on the top and the bottom and can even help you type faster, since the wider screen gives your fingers more room to breathe. 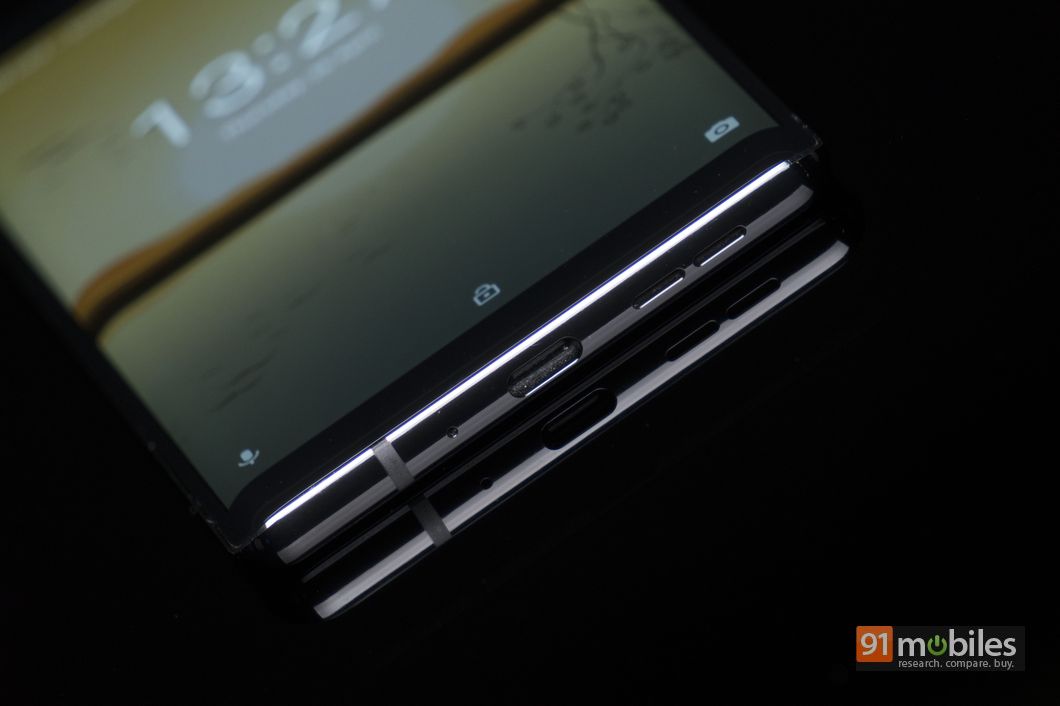 On the flip side, the dual-curved screen causes a blueish tint towards the edges of the display. This becomes more noticeable when you’re viewing the screen with a white background. Does it impact the usage experience in a big way? Not really. But it is quite apparent and if you cannot compromise on the quality of the display, then you should definitely look elsewhere. I also noticed that the smartphone’s accidental palm rejection isn’t as good as what you might find on the Samsung Galaxy S8 or the newer Galaxy S9. Again, it’s not a huge thorn in the flesh but it is something you’d want to consider before locking in your purchase.

The Nokia 8 Sirocco ships with a dual-camera setup at the back, comprising a pair of 12MP and 13MP sensors which have been fine-tuned by German optics maker, Carl Zeiss. The handset ships with a 5MP selfie-shooter, which is a downer, especially if you’re a selfie enthusiast like me. We’ll talk about that in a minute, but first, let’s take a closer look at the dual-camera setup at the back. 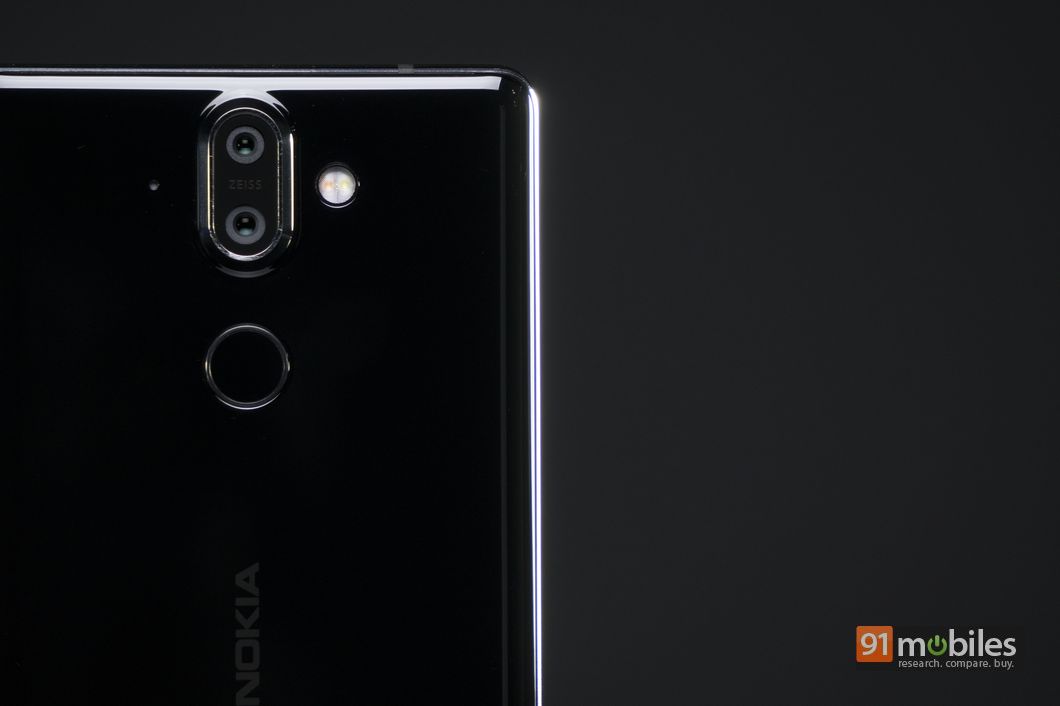 On paper, Nokia has furnished its latest flagship with a promising camera setup which churns out some nice images. However, the results are still not as impressive as the pictures I managed to click with the triple-camera toting Huawei P20 Pro (first impressions) or the dual-aperture sensor on the Samsung Galaxy S9+ (review). Regardless, if you are looking to replace your point-and-shoot camera with a smartphone, then the Nokia 8 Sirocco will do just fine. In terms of image quality, the shots I clicked outdoors had ample details and decent dynamic range. I really liked the colours in the images too, which were natural and true-to-life, unlike what you might get with say a Samsung smartphone.

The built-in HDR feature worked well to increase a picture’s dynamic range and the details in the shadows, though I did notice that the smartphone took a while to click images in this mode. Moreover, since the cameras don’t come with OIS, you’ll have to keep your hands really stable when shooting in HDR mode or else you’ll end up with a blurry picture. The 13MP telephoto lens works as advertised and clicks pictures without much loss in quality at 2X zoom.

The smartphone manages to impress in low-light scenarios too. As can be seen from the sample images embedded above, the device does a good job of capturing details in poor lighting. Granted, the images aren’t void of noise, but the results are still passable by social media standards. Unfortunately, the smartphone’s selfie shooter is its Achilles’ heel and the images I clicked with the device were just not up to my expectations – and I had very little, to begin with from the handset’s 5MP shooter.

While Nokia has given its latest flagship a facelift, the smartphone still shares the same internals as its predecessor, the Nokia 8. Inside, the Nokia 8 Sirocco is backed by last year’s Snapdragon 835 processor which has been aided by 6GB of RAM and 128GB of storage. Unfortunately, the Nokia 8 Sirocco ships with a single SIM slot and therefore, you can neither expand the storage, nor use dual-SIM connectivity with the device. 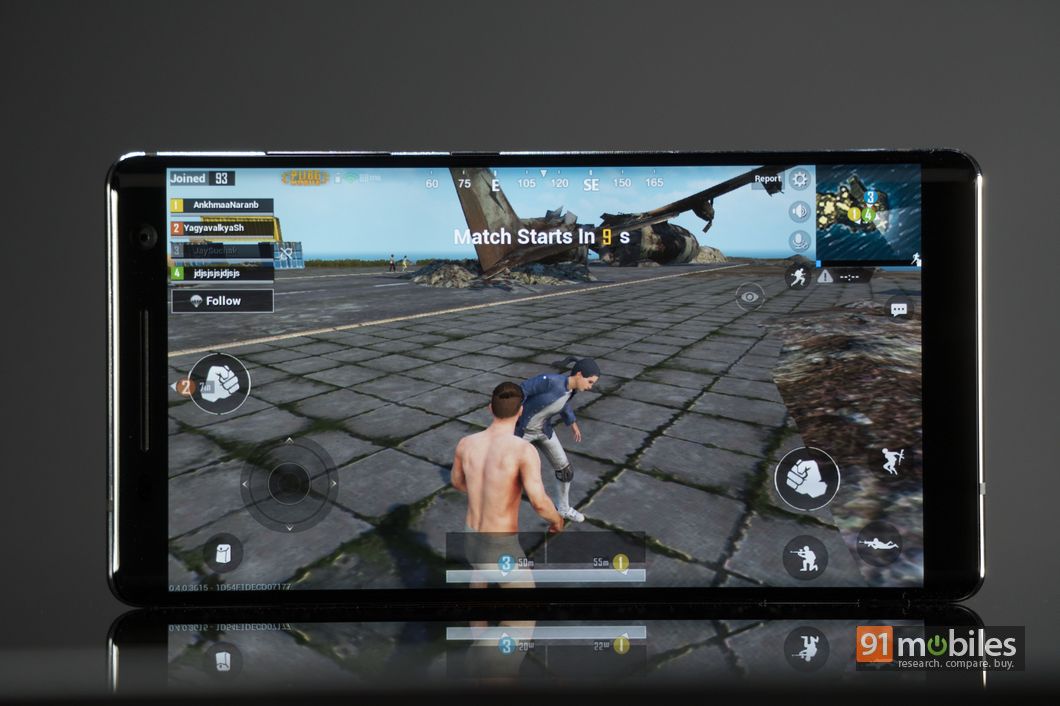 Even after a year, the Snapdragon 835 processor continues to be a top performer and during my time with the Nokia 8 Sirocco, I didn’t come across any instances of UI lags or stutters. Moreover, I was impressed with the smartphone’s gaming performance too, and the handset managed to get me through some intense battles on PUBG at the highest settings without any frame drops. I was a bit disappointed with the smartphone’s thermal management as the device got quite warm when I was running resource hungry applications like Snapchat and Onefootball. Thankfully, the spike in temperatures didn’t have any effect on the smartphone’s performance or battery life. 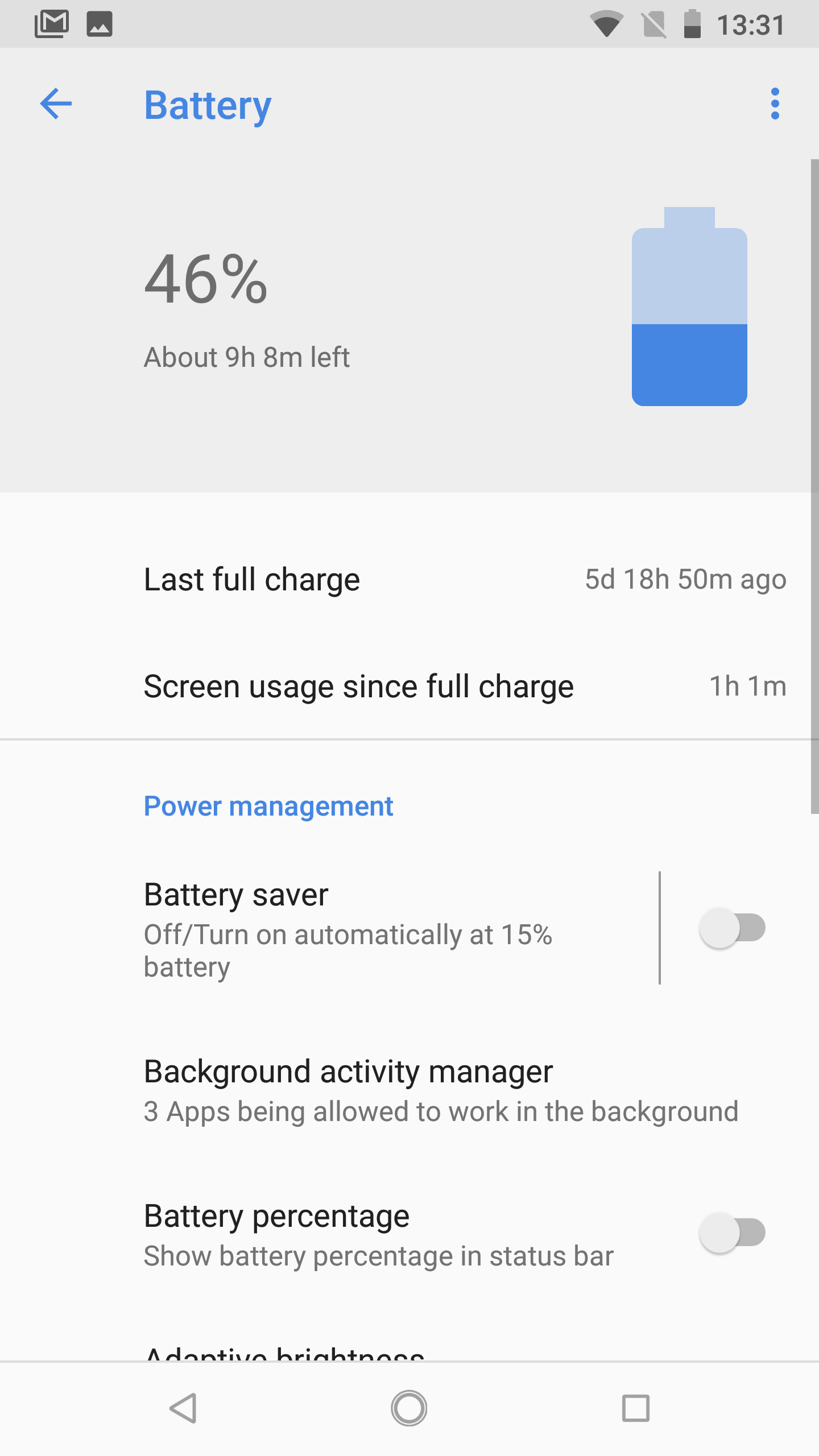 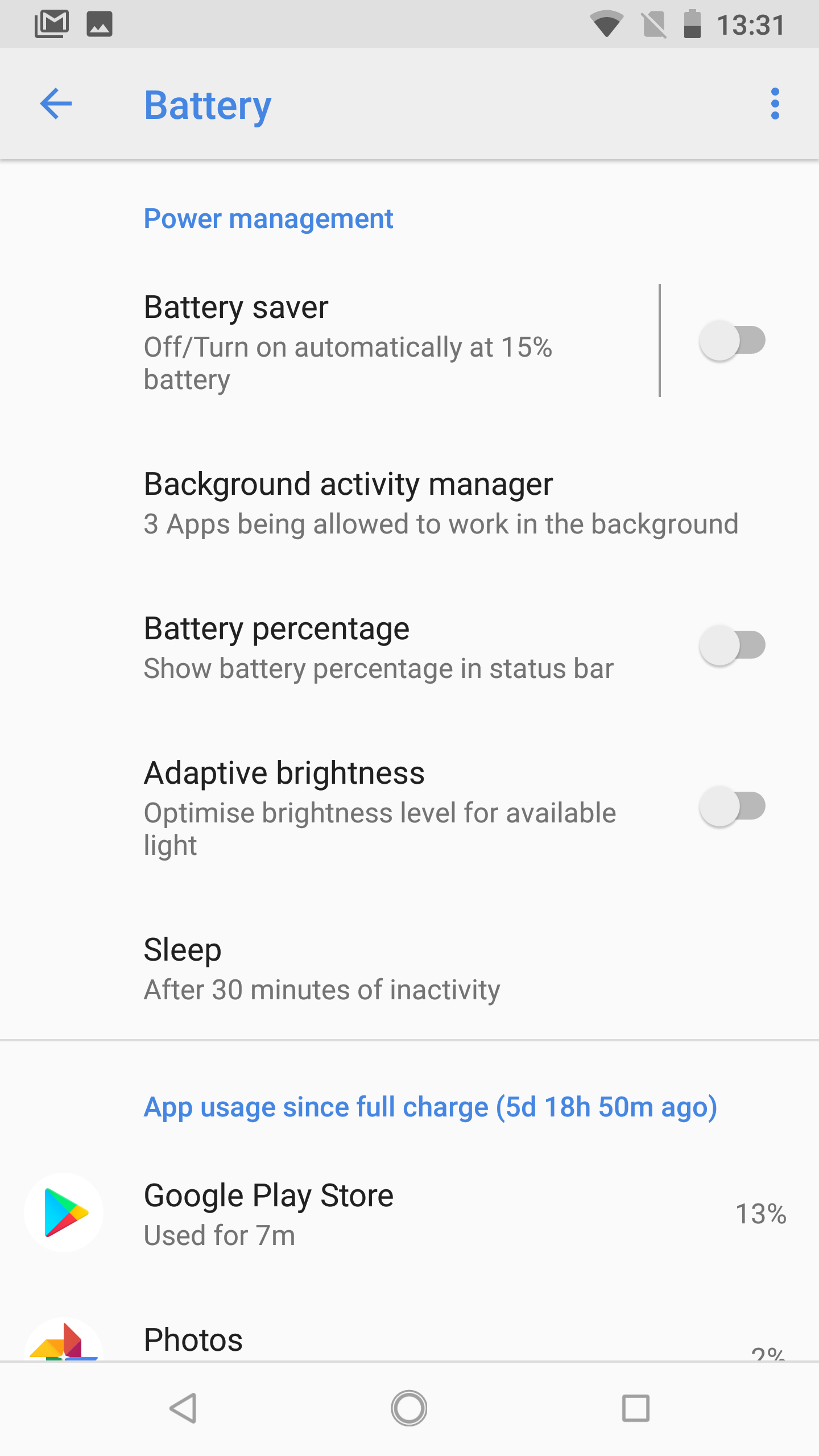 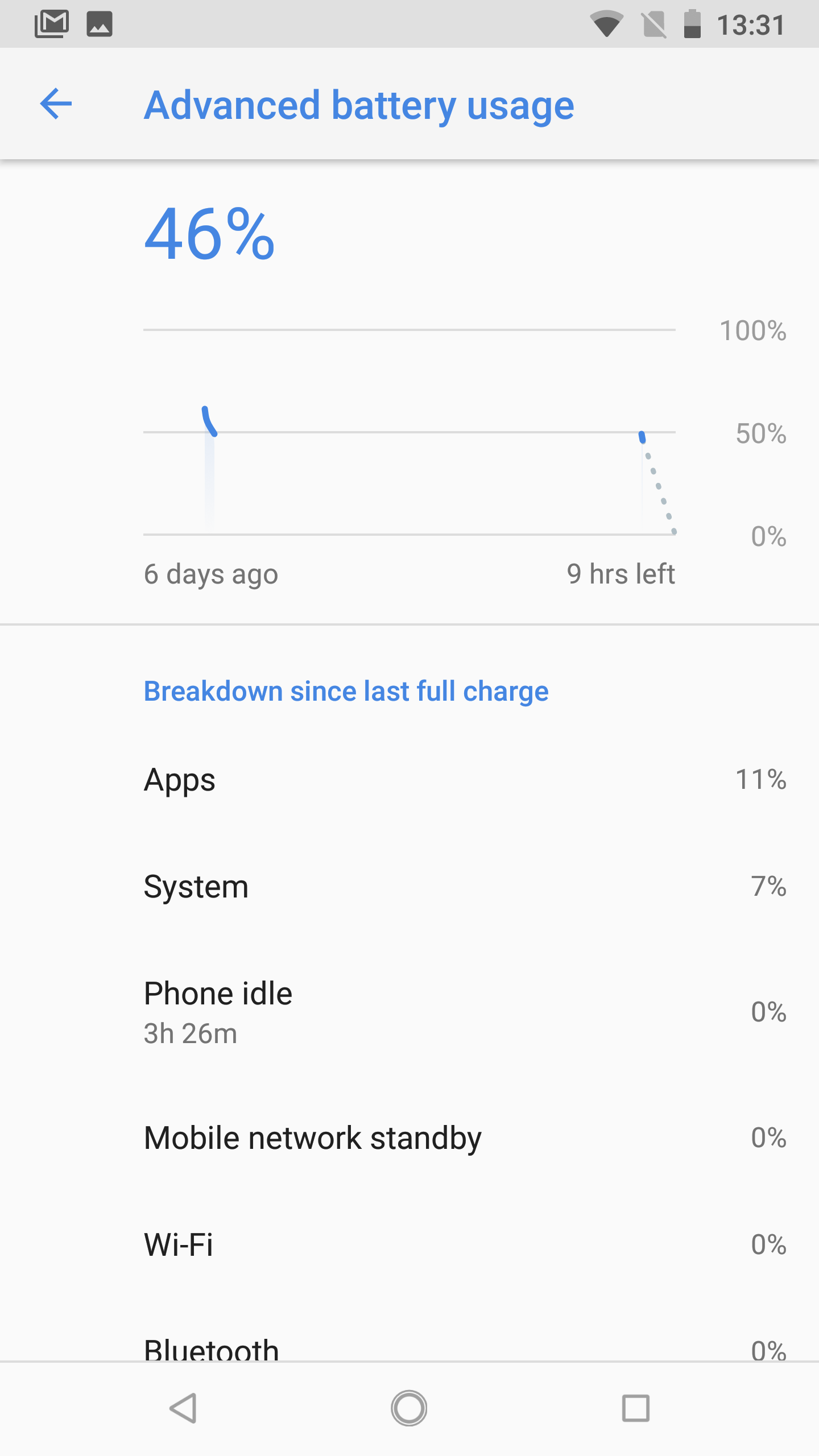 Nokia was known to deliver outstanding battery life back in the day and I’m happy to report that the tradition continues with the Nokia 8 Sirocco too. The phone is backed by a 3,260mAh cell which can deliver a day’s worth of battery life even on heavy usage and with the always-on display functionality turned on. Moreover, the smartphone comes with fast charging support too, allowing you to top it up to 50 percent in a little over 30 minutes. 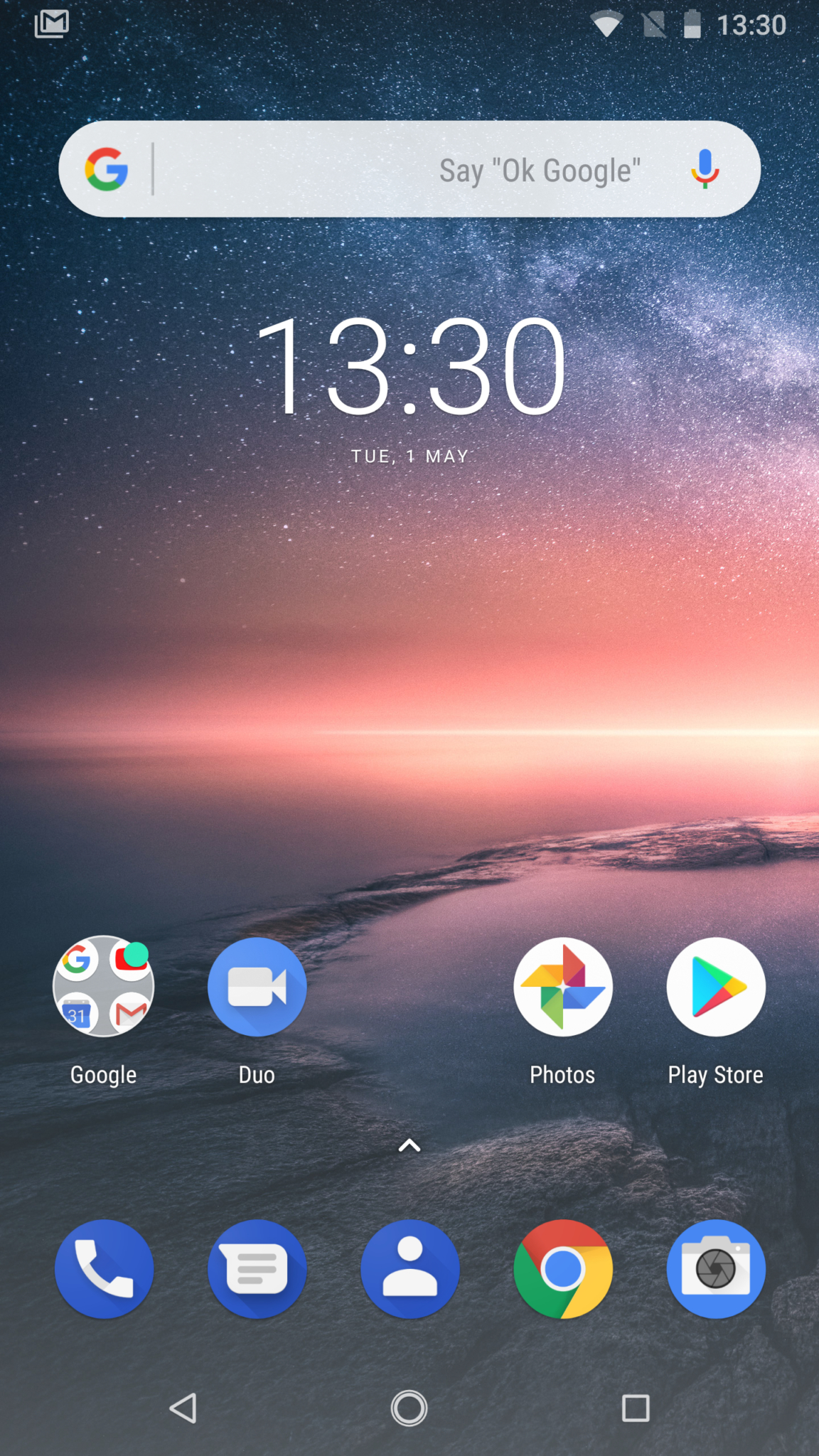 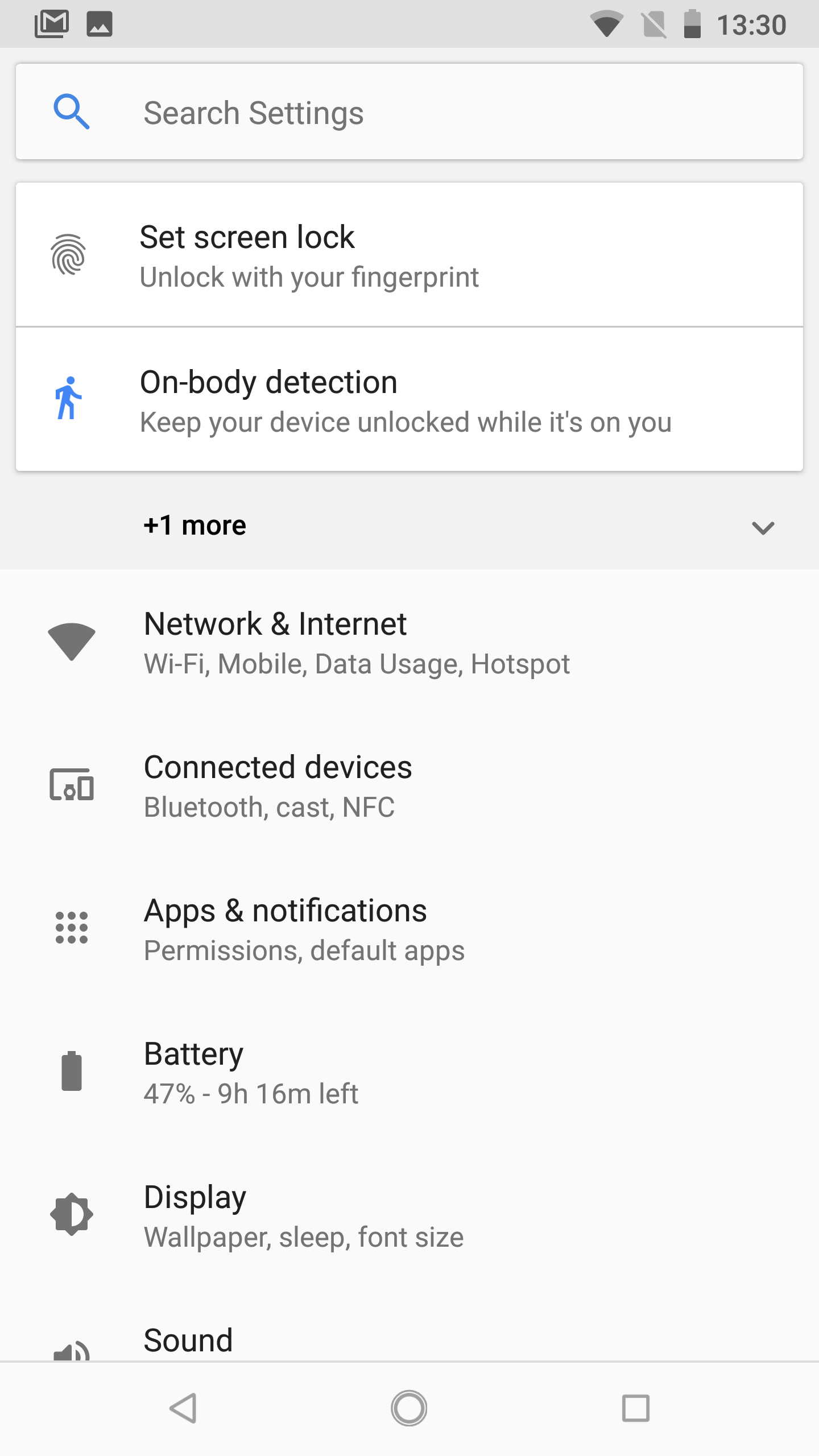 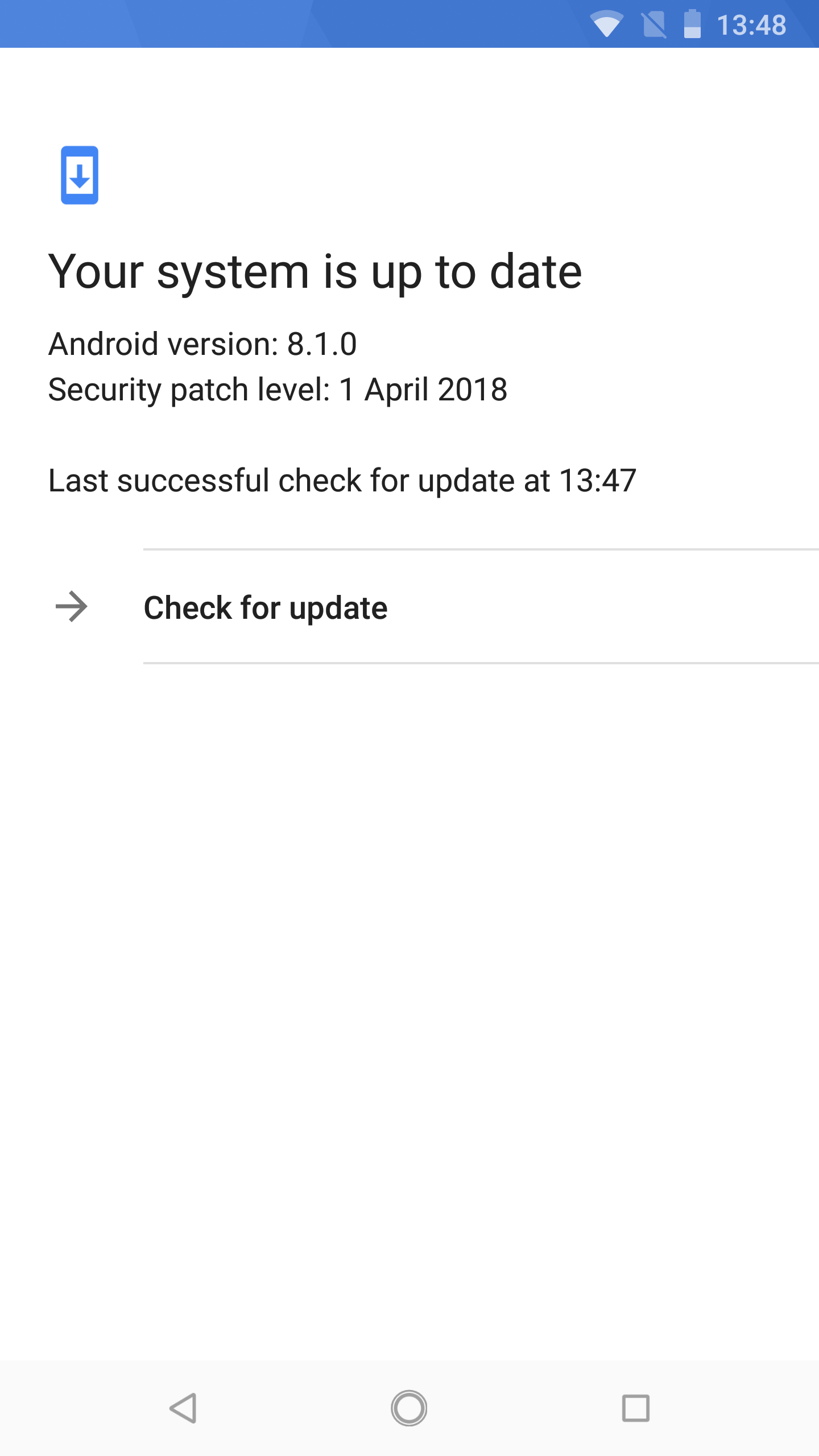 You might have noticed the Android One branding at the back of the Nokia 8 Sirocco by now. Well, for those unaware, the company’s entire smartphone lineup for 2018 is part of Google’s Android One program. Therefore, regardless of whichever Nokia smartphone you end up buying, you’ll get a stock, barebones version of Android and super-quick updates. My review unit shipped with Android Oreo v8.1 and came preinstalled with no bloatware, which is always a good thing. Now, even though I have a slight bias towards smartphones which ship with stock Android, I did miss using gestures on the Nokia 8 Sirocco. Therefore, you will have to download a third-party launcher if you want to customise the device or make use of gestures and features like one-handed mode.

The Nokia 8 Sirocco is a gorgeous flagship which has been constructed with the utmost attention to the design and the aesthetics. The handset feels like a luxury in the hand, and unsurprisingly, Nokia expects buyers to pay a premium for the smartphone – a premium worth Rs 50,000, to be precise. Now, if you want your device to turn heads every time you take it out of your pocket, you should consider investing in the Nokia 8 Sirocco. For everything else though, you can get a better deal elsewhere. 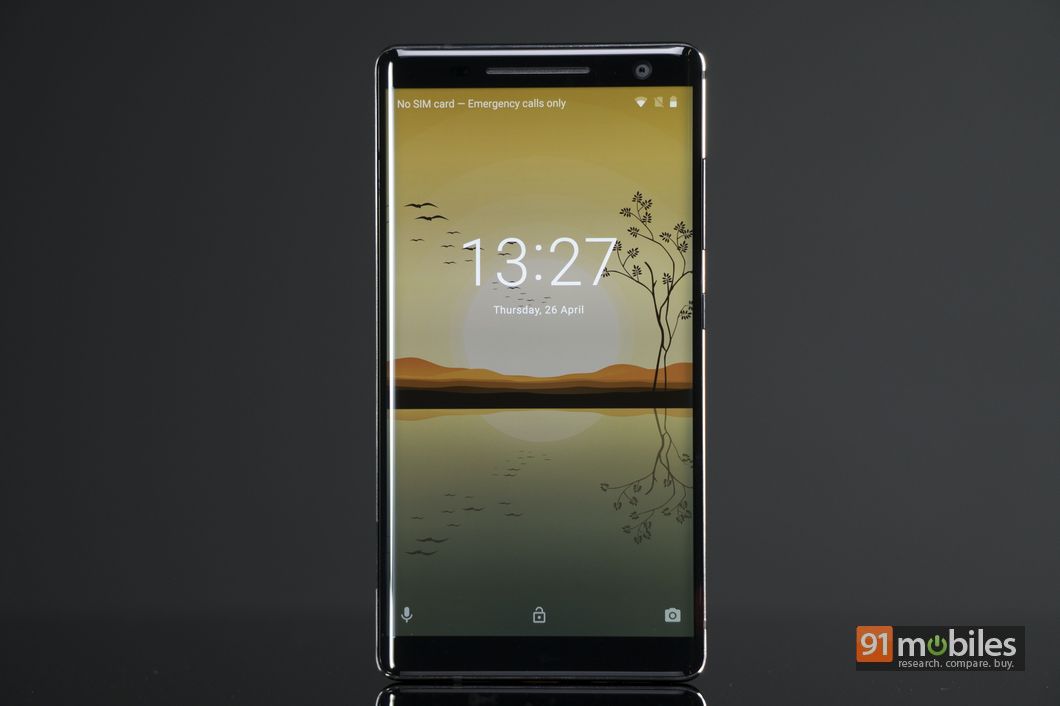 Performance enthusiasts can simply buy the OnePlus 5T (review) which also comes with a Snapdragon 835 processor albeit is way more affordable. In fact, you could even wait for the upcoming OnePlus 6, which will ship with the newer Snapdragon 845 chip. If you want the best camera smartphone, then you could instead buy the Google Pixel 2 (review), which retails for the same price as the Nokia 8 Sirocco and at times, even less. All in all, there’s a number of high-end smartphones under Rs 50K which you could opt for instead of buying the Nokia 8 Sirocco, provided you don’t want the absolute best-looking smartphone in the market.