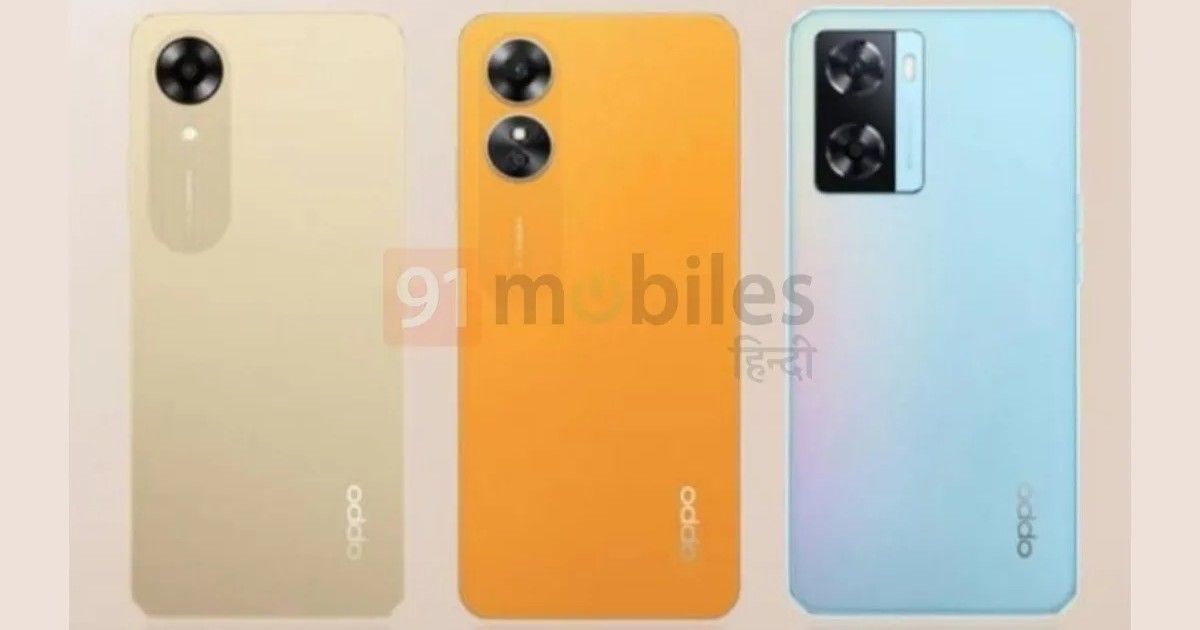 OPPO is seemingly trying to strengthen its range of budget smartphones with its OPPO A17 and OPPO A77s being in the news recently. Now, 91mobiles Hindi has revealed exclusive information revealing OPPO’s plan of launching three new budget-friendly ‘A’ series smartphones – OPPO A17k, OPPO A17, and OPPO A77s – around the festive season. On the face of it, it looks like that OPPO is trying to cover three price segments in India with the launch of these phones i.e., entry-level, low-budget, and mid-budget.

The information received via offline retail also suggests that the upcoming OPPO phones will be priced between Rs 10,000 to Rs 18,000. Let’s have a look at the price and expected specifications of the phones.

OPPO A17k is expected to flaunt a 6.56 inch HD + screen and pack a 5,000mAh battery with 10W fast charging support. It is said to be powered by the MediaTek Helio G35 processor, whose maximum clock speed will be 2.3 GHz, and it will run on Android 12-based Color OS 12.1 out of the box. It is said to include 3GB RAM and might also be available in 4GB RAM. The phone will also feature RAM Plus support that will allow the use of up to 7GB of RAM. This handset will measure 8.29mm in thickness and weigh 189 grams.

Moving to optics, the smartphone is expected to have a 5MP front camera and an 8MP rear camera. 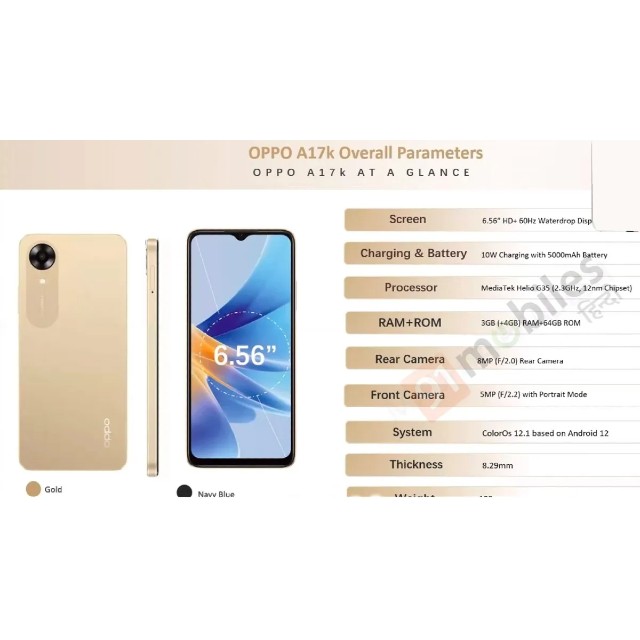 OPPO A17 will be powered by the same MediaTek Helio G35 chipset and pack a 5,000mAh battery with 10W fast charging support, just like the OPPO A17k. It is expected to flaunt a 6.56-inch screen with 720 x 1600 pixel resolution and include 4GB RAM with further support of 4GB extended RAM, thus allowing to use of up to 8GB RAM in total.

Moving to optics, the A17 will feature a dual rear camera: a 50MP main camera with f/1.8 aperture and a 2MP depth sensor. A 5MP front snapper with an f/2.2 aperture will take care of the selfie and video calling needs. 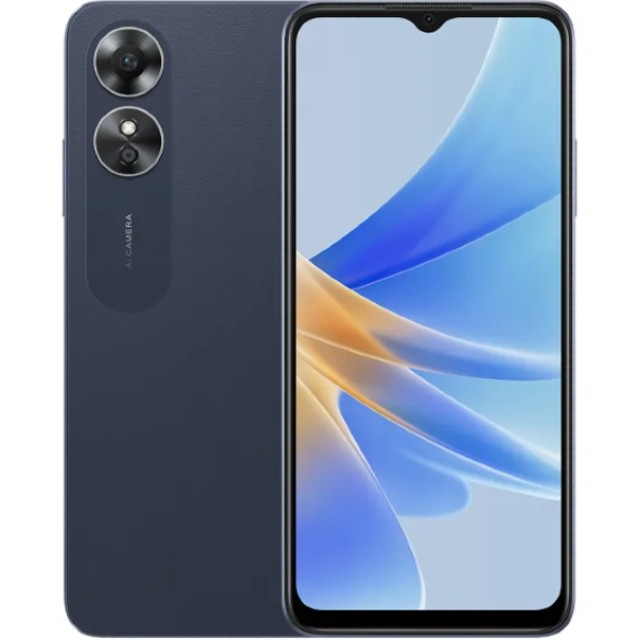 OPPO A77s is more expensive than the other two and hence, unlike the two, it is said to be powered by the Qualcomm Snapdragon 680 SoC and run on Android 12-based ColorOS 12.1 out of the box. It will include 8GB RAM and 128GB internal storage with 5GB virtual RAM support. The smartphone is expected to measure 7.99mm in thickness and weigh 187 grams. The A77s is further confirmed to be a 4G handset. 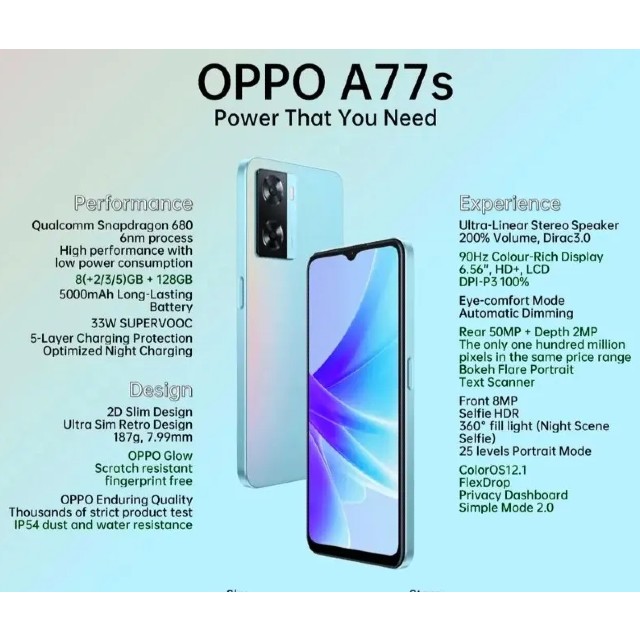 It is further said to flaunt a 6.56-inch HD+ display with a 90Hz refresh rate and 100 percent DCI-P3 for colour-gamut displays. It could pack a 5000mAh battery with 33W SuperVOOC charging support. OPPO claims to have used the Oppo Glow design technology for the A77s and states that the handset is scratch resistant and will not leave fingerprints on the back panel of the phone. Moreover, it will feature ultra-linear stereo speakers.

Moving to optics, it will be equipped with a dual-camera setup: a 50MP main camera and a 2MP depth sensor. An 8MP front camera with HDR support will take care of selfie and video calling needs. 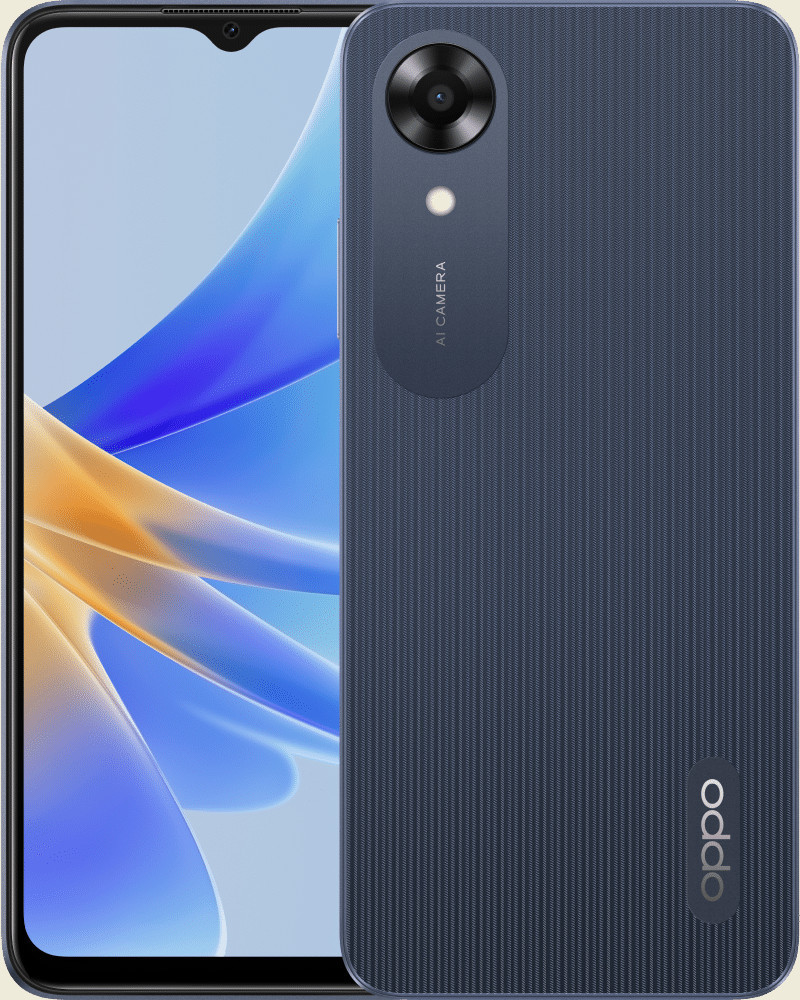