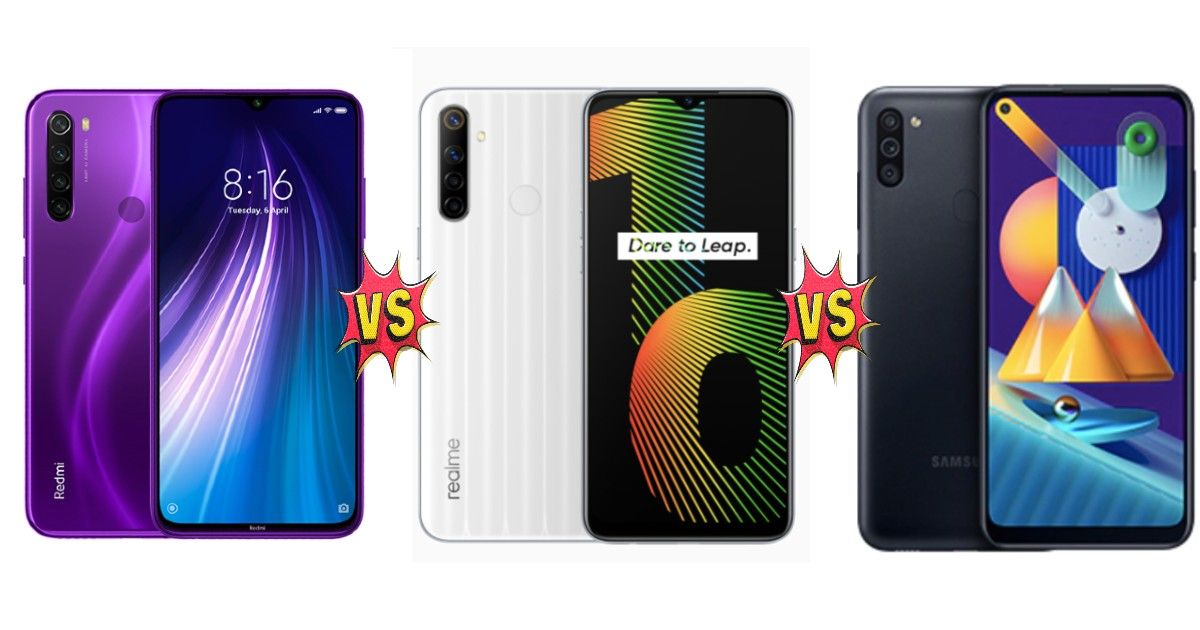 Samsung Galaxy M11 was launched in India this week with an affordable price tag that falls under Rs 15,000. The smartphone will be taking on the likes of the Redmi Note 8 and Realme Narzo 10 in this segment. The new affordable handset from the South Korean giant ships with an Infinity-O display, Qualcomm Snapdragon chipset, triple rear cameras, and a large battery capacity. Let’s see how the Samsung Galaxy M11 specifications and prices stand against the Redmi Note 8 and Realme Narzo 10.

The Samsung Galaxy M11 price in India is set at Rs 10,999 for the base variant with 3GB RAM and 32GB storage, while the 4GB RAM + 64GB storage variant costs Rs 12,999. The handset is available for sale on Samsung.com, Flipkart, Amazon India and across offline stores in metallic blue, black and violet colours.

The Redmi Note 8, on the other hand, has been priced in India at Rs 11,999 for the 4GB RAM + 64GB storage option, while the 6GB RAM + 128GB variant will set you back to Rs 14,499. The handset comes in Cosmic Purple, Moonlight White, Neptune Blue, and Space Black colours. The Realme Narzo 10 is priced at Rs 11,999 for the sole 4GB + 128GB configuration. The handset is available in two colour options: That Green and That White.

The Samsung Galaxy M11 comes clad in a polycarbonate body with a 6.4-inch HD+ LCD Infinity-O display that bears 720 x 1,560p resolution. The rear panel of the phone packs triple rear cameras and oblong-shaped fingerprint scanner. The phone also features 3.5mm headphone jack in the top edge, power and volume buttons on the right spine, and speaker grille and micro-USB port at the bottom edge.

As for Redmi Note 8, it features a glass sandwich design with gradient finish and 6.3-inch Full-HD+ dot notch display of LCD variety. The handset features quad rear cameras that protrude from the frame a little. The top edge of the phone has an Infrared sensor and mic, while headphone jack, mic, speaker grill, and Type-C port are all placed at the bottom. The volume rocker and power button are on the right spine, just like Samsung Galaxy M31.

Realme Narzo 10 ships with a 6.5-inch HD+ waterdrop notch LCD display. The phone’s design is inspired by Realme X Master Edition smartphone from last year. The rear panel has dual-tone finish and quad cameras vertically-aligned in the top left. As for the spine, the Realme Narzo 10 has a volume rocker on the left spine and power button on the right. The bottom edge houses USB Type-C port, speaker grill, and 3.5mm headphone jack.

The Samsung Galaxy M11 has Qualcomm Snapdragon 450 chipset paired with up to 4GB of RAM and 64GB storage ticking at its core. The storage can be further expanded up to 512GB using a microSD card. Software-wise, the phone runs Android 10-based One UI 2 out of the box.

The Redmi Note 8 gets a more powerful Qualcomm Snapdragon 665 SoC compared to the Galaxy M11. The chipset is aided by up to 6GB of RAM + 128GB user-expandable storage up to 512GB. The handset comes pre-loaded with MIUI 11 atop Android 10 out of the box.

The Realme Narzo 10A, on the other hand, rocks the MediaTek Helio G80 gaming-centric chipset mated with 4GB of RAM and 128GB storage onboard. The phone runs Realme UI with Android 10 out of the box.

In terms of optics, the Samsung Galaxy M11 features triple rear cameras with 13MP (f/1.8) primary sensor, a 5MP (f/2.2) ultra-wide-angle lens, and a 2MP (f/2.4) depth sensor for portrait shots. There is an 8MP snapper on the front for selfies and video chats.

The Redmi Note 8 and Realme Narzo 10 both, in contrast, pack quad camera setup at the back. The setup comprises a 48MP primary sensor with f/1.8 aperture, an 8MP ultra-wide-angle sensor, a 2MP depth-of-field sensor for portraits, and a 2MP macro lens. As for selfies and video chats, Realme Narzo 10 has a 16MP f/2.0 front camera, while the Redmi Note 8 gets a 13MP f/2.0 shooter.

Samsung Galaxy M11 vs Redmi Note 8 vs Realme Narzo 10: battery and other features

All three phones have a rear-mounted fingerprint scanner for security and connectivity options such as 4G LTE, dual SIM slots, Wi-Fi, Bluetooth 5.0, GPS/ GLONASS, and a dedicated 3.5mm jack for audio, so little difference there.

Going by the spec sheet alone, the Samsung Galaxy M11 seems underwhelming compared to the Realme Narzo 10 and Redmi Note 8 phones. Both the Realme and Redmi phones offer more powerful hardware and better camera setups, at least on paper. However, it’s worth mentioning that you will have to spend Rs 1,000 more for these phons. The Samsung Galaxy M11’s display might be a winning point as it is one of the most affordable phones with a punch-hole cutout. That being said, we can only know how good the Samsung phone is after we review the device, so stay tuned for that.