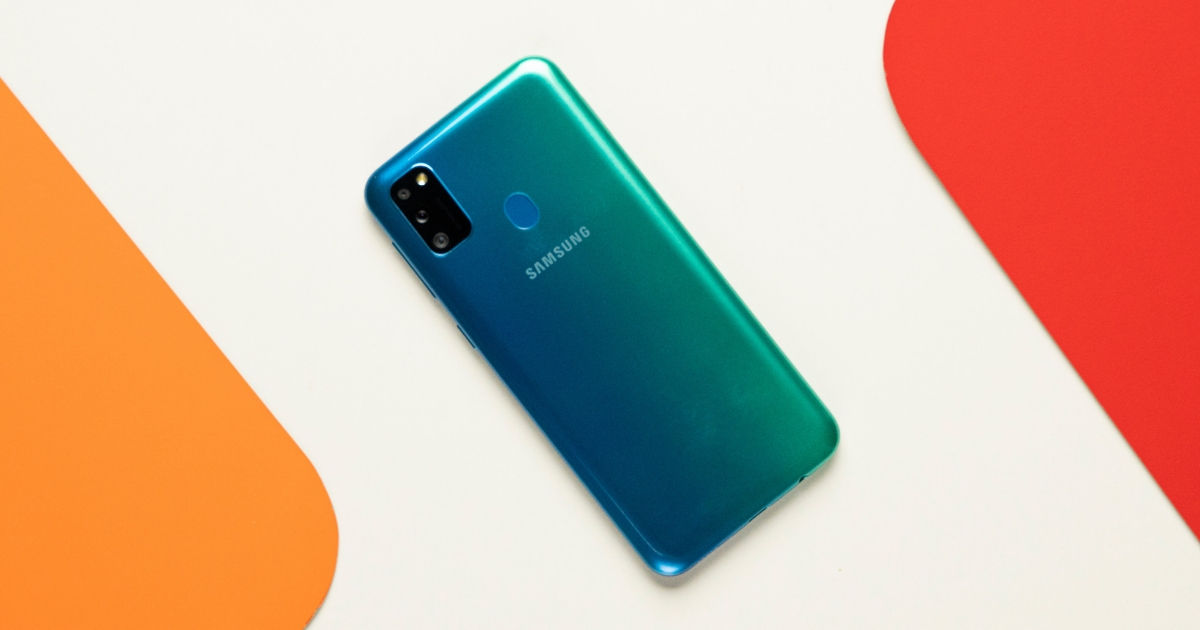 Take one look at the list of most popular phones in 2019, and you’d see how Samsung has been able to script a strong comeback in the budget and mid-range segment, a category which has been awash with Chinese brands for a long time. While it seemed nigh impossible last year, the Chaebol has done this on the back of an impressive lineup in the form of its all-new M series and refreshed A series. And some of its phones even managed to grabbed headlines by offering industry first features. The Galaxy M30 (review) for instance, was one of the rare handsets that flaunted a triple-camera setup under Rs 15k, when it was introduced back in February. So it was certainly interesting to see what Samsung comes up with next, and we’ve got our answer with the Galaxy M30s (first impressions). To figure out if the new phone is just an evolutionary upgrade or can it offer something more, here’s a deep dive into its capabilities. 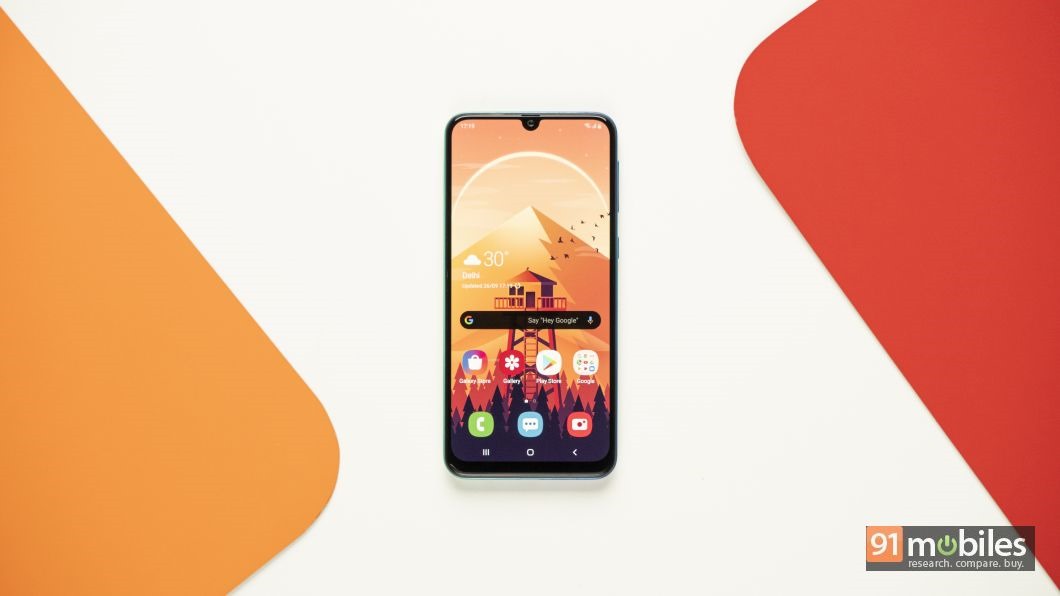 The Samsung Galaxy M30s arrives at a time when the Rs 15k smartphone category is seeing a lot of action. Xiaomi’s Redmi Note 7 Pro (review) is still among the best contenders in this price bracket, while Realme continues to warrant attention with its brilliant devices, the latest being the quad camera-flaunting Realme 5 Pro (review). Then there’s Vivo’s Z1 Pro (review) and Z1x (review) that flaunt triple cams and a beefy 5,000mAh battery (4,500mAh in the case of the Z1x). Motorola is also vying for a piece of the pie with the One Action (review), which also comes with triple shooters on the back, with one of them offering the ability to shoot smooth footage of fast-moving subjects. 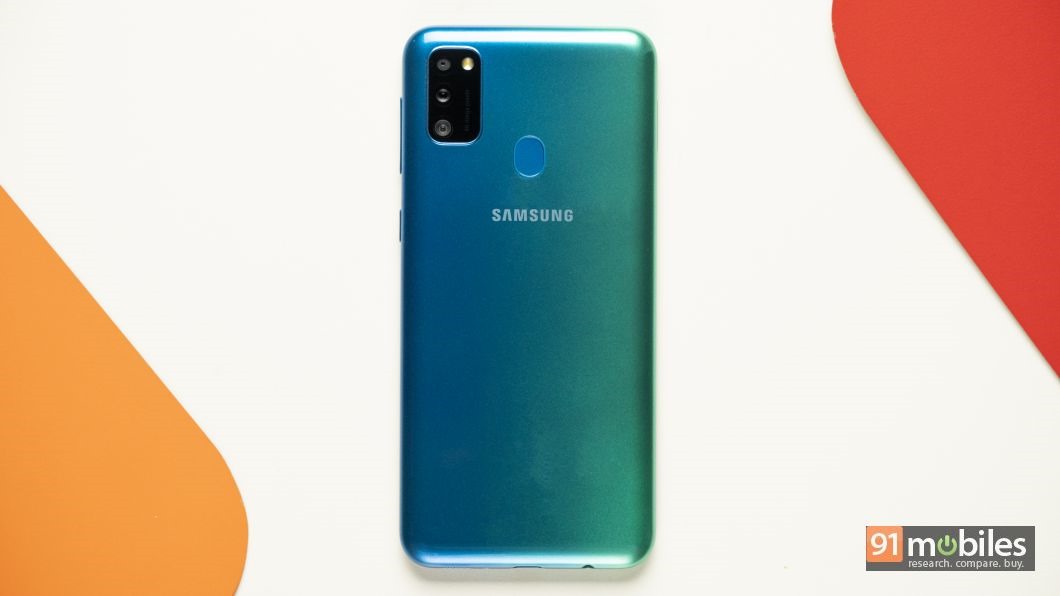 In short, there’s no shortage of excellent, VFM smartphone options under Rs 15,000. As a matter of fact, there might be better option than the Galaxy M30s if you consider various aspects separately, but overall, the device leaves a lasting impression as a capable all-round offering that doesn’t compromise on essentials. While the design could’ve been refined further, the handset has a gorgeous display, impressive cameras, reliable hardware, and a battery that’s miles ahead of its rivals.

Instead of talking about Samsung Galaxy M30s’ design, we’ll start this review with its innards. That’s because it has got some serious upgrades. The calling card of course, is its 6,000mAh battery – which hasn’t been seen on a mainstream smartphone yet, especially at this price point (there’s ROG Phone II as well, though one could argue that it’s focused on the gaming niche). And if the 5,000mAh pack on its predecessor managed to impress us, imagine how good the battery life on the M30s would be. Well, I tested out the phone as a daily driver and didn’t need to charge it before the end of two days. And this is when I used it extensively for battery-guzzling tasks like navigation and as a hotspot, along with streaming videos and podcasts, web surfing and checking email. In PCMark10’s battery test, the device scored 20 hours, which is impressive indeed.

And if you’re worried about putting the device on charge overnight as it’d take a long time to juice up, then don’t. Thanks to 15W charging support, it goes from 10 to 100 percent levels in about two hours. From my point of view though, maybe the brand should’ve opted for higher wattage, making charging it even faster.

While the M30 made use of Samsung’s new Exynos 7809 SoC, the Galaxy M30s gets an upgrade in the form of the octa-core Exynos 9611 chipset. The 10nm silicon offers two quad-core clusters of Cortex-A73 and Cortex-A53 running at 2.3GHz and 1.7GHz, respectively. To see how improved it is over the chip powering the device’s previous iteration, I ran Geekbench and also added other devices to the mix. While the Galaxy M30s is better than the M30, it isn’t the fastest phone in town. Having said that, it does manage to hold its own. More importantly, I didn’t face any trace of lag while using it on a day-to-day basis. Multitasking is smooth as well, all thanks to 6 gigs of RAM. 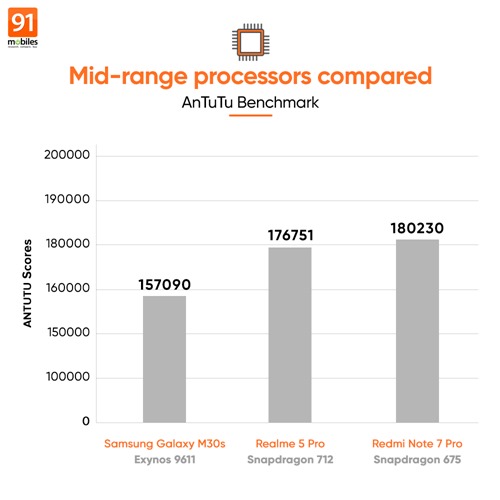 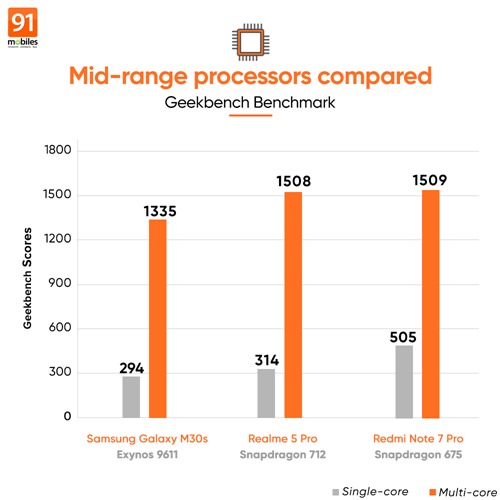 The Exynos 9611 SoC comes with Mali-G72 MP3 graphics which are able to handle gaming relatively well. Playing Asphalt 9 or PUBG Mobile was a joyous affair, though there were certain instances of frame drops. And it’s worth noting that the device is able to play PUBG at the highest graphics settings, and if you choose the lower one, then the experience is much smoother. In terms of thermal efficiency, the device is quite good and heats up only a bit when it’s pushed to the limits. 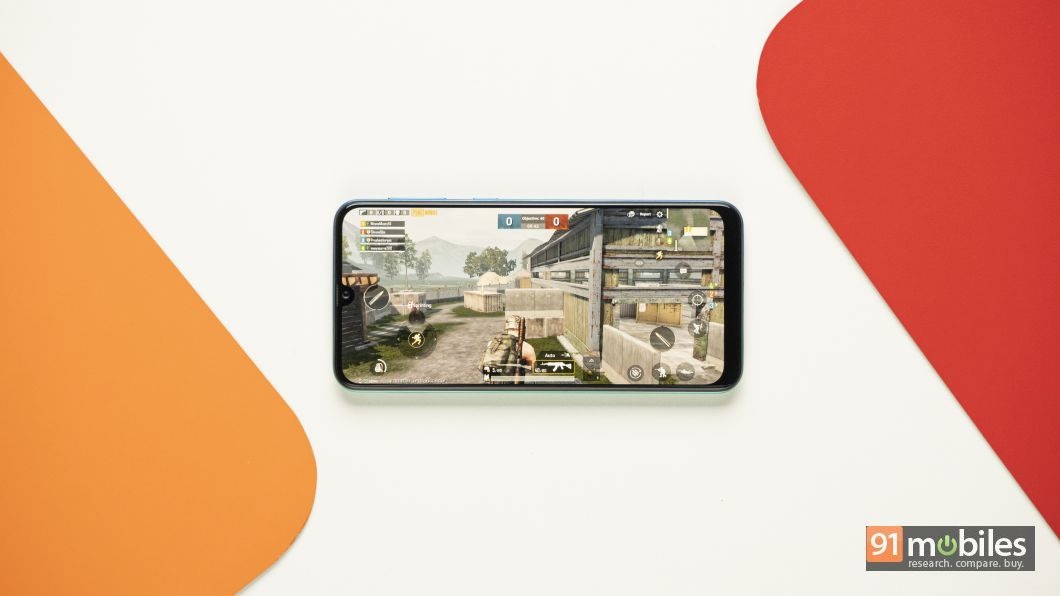 Taking care of storage needs on the M30s is 128GB of built-in memory, which offers around 110GB to you out of the box. If need be, it can be topped up by another 1TB with the use of a microSD card. Since the phone has triple slots, you don’t need to sacrifice on the dual-SIM capabilities either.

The phone ships with Android 9.0 Pie which is layered with OneUI. We already love this minimalistic interface and its features such as dark mode, though have to point out that there’s still some bloatware preinstalled and you do get unnecessary notifications from the MyGalaxy app.

Despite sporting a single speaker at the bottom, the audio output on the Galaxy M30s is quite loud. It’s not really rich however, and the fact that the sound gets muffled when you are holding the device in the landscape position is also a bummer.

While the biometric unlock on the M30s is plenty fast, it makes you miss out the lockcreen. What’s so special about it, you ask? Well, Glance’s lockscreen stories would make you fall in love with the phone’s lockscreen. That’s because the feature brings news, entertainment, fashion, food, travel and much more from across the world to the M30s’ lockscreen.
You can play games without needing to download an app and wasting storage. And if you are the fashionable types, you can get exciting tips from the hottest celebrity in town. You can even shop for the latest fashion accessories from within Glance. You can personalise Glance as per your taste. Do note that thanks to Glance, you might end up spending considerable time on the lockscreen itself, so don’t tell us that we didn’t warn you. Similar to its previous avatar, Samsung’s new Galaxy M30s flaunts a trio of sensors on its back. However, the primary camera gets an upgrade as it comes with a 48-megapixel sensor instead of a 16MP shooter. Sadly, the company hasn’t specified which sensor it’s using for the same, The secondary and tertiary snappers continue to be 8MP and 5MP units, respectively offering ultra wide-angle and portrait functionality. As far as the camera interface is concerned, there’s no change. That’s not a bad thing as the viewfinder is neatly laid out and it doesn’t take long to get used to the options and modes.

Quality-wise, it’s hard to find a bad camera phone now as we’ve come a long way since VGA days. But there’s no doubt that the M30s is one of the better shooters in its price band. The daylight shots have a lot of details and the phone manages to do justice to various objects in the frame. The colour reproduction is spot on too, and it’s interesting to see that Samsung has tweaked its image processing as not all images are oversaturated, and that’s great news for those who prefer natural output. The close-ups are quite good too, and though they aren’t as sharp as I’d have liked, the bokeh effect adds to their charm. The device lets you capture 48MP shots too, but you wouldn’t notice a world of difference between regular 12MP images and this one. The wide-angle mode lacks autofocusing capabilities, but offers an impressive dynamic range. With the dedicated depth-sensing unit, portraits turn out to be pleasing as well. Thanks to 4-in-1 pixel technology, low-light shots are good, but the device isn’t able to contain the exposure issues. You can also enable the night mode which increases the exposure time for getting good results in low light. These pics are certainly better than the ones shot in auto mode, but for some strange reason, the output is slightly cropped. Unlike its predecessor, the handset can capture videos at 4k resolution too, though you don’t get video stabilisation in this case. Now instead of going verbose with Samsung Galaxy M30s camera quality, I’ll leave you with its camera samples.

The selfie camera on the Galaxy M30s remains the same as the M30 – a 16-megapixel unit. The quality is also the same, i.e. selfies are good, but they can’t compete with rivals. The software-based live focus is also not up to the mark as you’ll see the face getting softer and the edges aren’t well-defined either.

But the most important question is how the Galaxy M30s cameras fare against the competition? Well, we pitted it against the likes of the Realme 5 Pro and Vivo Z1x. While Realme might attract you with its preference to oversaturated colours, Samsung’s offering does manage to hold its own by offering natural colours and sharper images, when viewed in full resolution. In comparison to the Z1x, the images are at par in well-lit conditions, but it does seem slightly better in poor lighting, and the night mode is far ahead. In the wide-angle mode however, it’s the M30s that will win you over against the other two.

This is an aspect that’s largely the same, especially from the front. Just like the Galaxy M30, its successor features an infinity-V panel that has minimal bezels around the three sides, and slightly thick bezels on the chin. 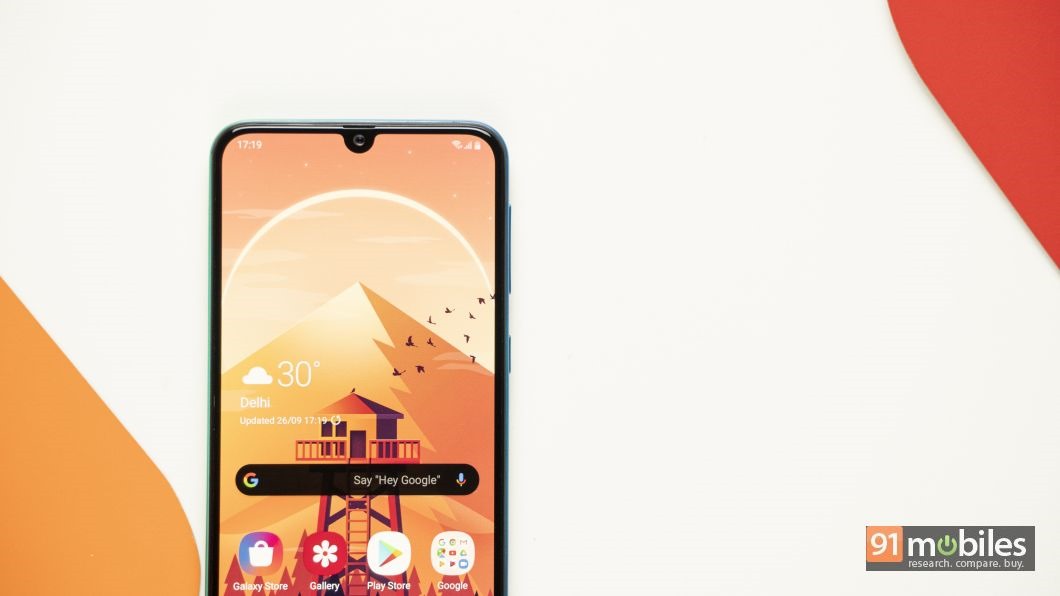 The design elements are also the same, with both the volume keys and power switch placed on the right spine. The left edge holds a tray for housing dual-SIM cards and a microSD card. A noise-cancelling microphone is placed up top, whereas the base is chock-a-block with the 3.5mm headphone socket, a USB Type-C port and a speaker grille.

It’s the back of the Samsung Galaxy M30s that’s quite different from the M30. You will find a rather unique gradient hue, which instead of changing colours horizontally does so vertically. The version I reviewed is Sapphire Blue which looks quite good with the colour changing from blue to turquoise. You can also purchase the handset in classic black or white options. At the rear, there’s also a hard-to-miss triple camera module. Unlike the single strip in its predecessor, the handset has three shooters vertically with a flash unit alongside, which looks unsightly, if I may say so. It’s worth mentioning that Samsung has opted for a polycarbonate back which isn’t as premium as a glass-back construction but does seem solid. Additionally, it helps the brand in keeping the phone’s weight in check. Speaking of that, it’s impressive that Samsung has been able to pack a monster 6,000mAh cell inside without increasing the bulk (188g) or thickness (8.9mm). 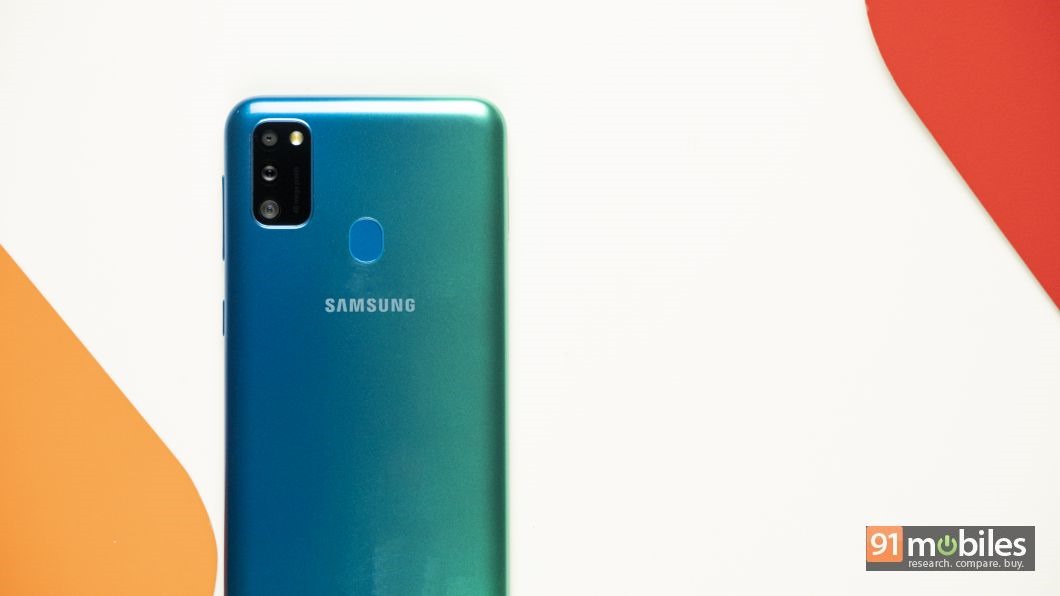 At the rear, you’ll also find the fingerprint sensor. The sensor is positioned well, and your finger rests on the scanner easily and unlocks the phone quickly. Of course, there’s face unlock support too for authenticating yourself, though it’s not the fastest we’ve come across. The face unlock also struggles to unlock the phone in challenging lighting situations. 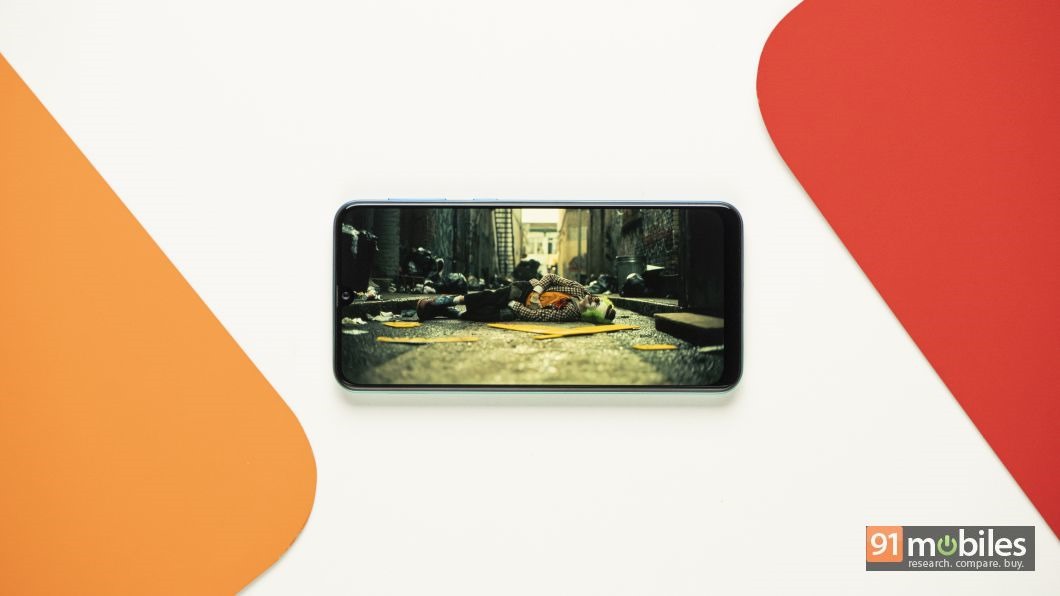 Consuming multimedia on the Galaxy M30s is a joyous affair, all thanks to 6.4-inch Super AMOLED panel. The screen is sharp, offers ample brightness levels with good colours. Since it uses AMOLED tech, you also get always-on Display capability. Sadly, the screen lacks any sort of protective coating, and hence I’d suggest applying a screen protector.

With the price tag that’s Rs 1,000 lower than the sticker price of the Galaxy M30, Samsung continues its aggressive stance. And add to that the monstrous battery capacity of 6,000mAh, and the Samsung Galaxy M30s clearly ranks among the top choices in the sub-Rs 15k segment. 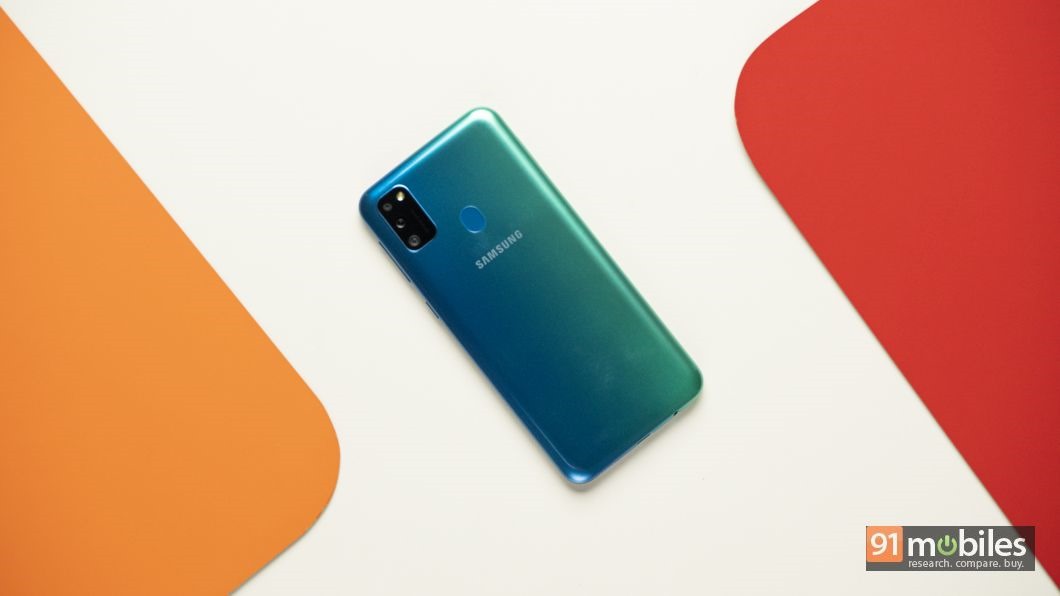