Samsung has always had a strong customer following. However, for a long time, the company restricted itself to manufacturing comparatively expensive devices. But the ever-changing smartphone industry has progressed quite a bit since the early days, and features we thought were premium have now filtered down to budget devices, all thanks to the influx of Chinese brands in the market. Most local brands have stepped up their game as well. Although Samsung continues to be a popular brand in India, it was only with the Galaxy J5 (review) and Galaxy J7 (first impressions) that the Korean smartphone maker started adhering to current market standards. 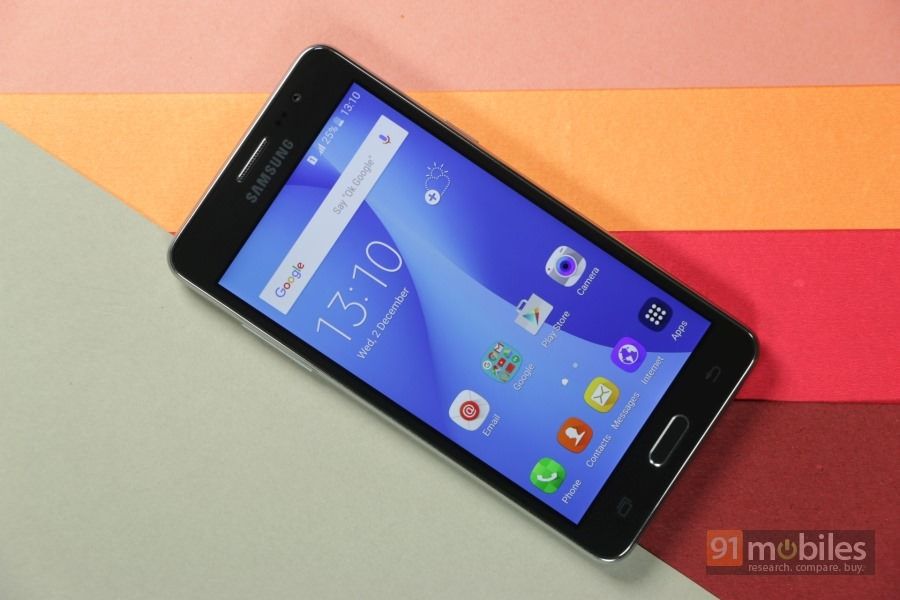 Samsung followed suit with the Galaxy On5 and Galaxy On7 (first impressions), and the former is what we have been testing. For a price of Rs 8,990, the phone is not exactly a loaded offering but still offers promising specs. However, with devices such as the Coolpad Note 3 and the popular YU Yuphoria present in the price segment, does the Galaxy On5 offer enough? We find out. 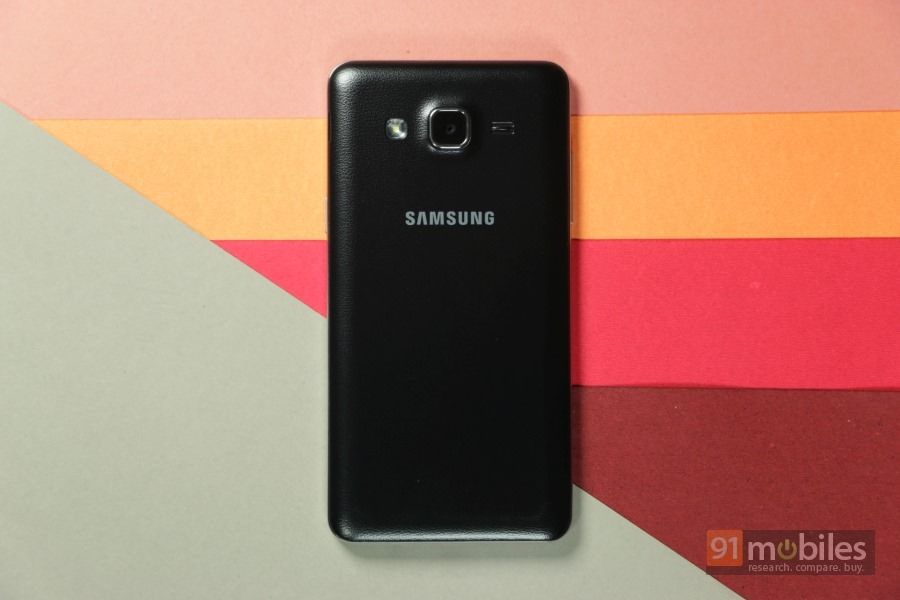 We got the black variant of the Galaxy On5 and all we can say is, it’s not a head-turner. The back panel of the phone comes with Samsung’s trademark faux leather finish which keeps fingerprints and smudges at bay. Silver trims in a brushed metallic finish run alongside the edges of the phone, which add a bit of class to the overall design of the phone. 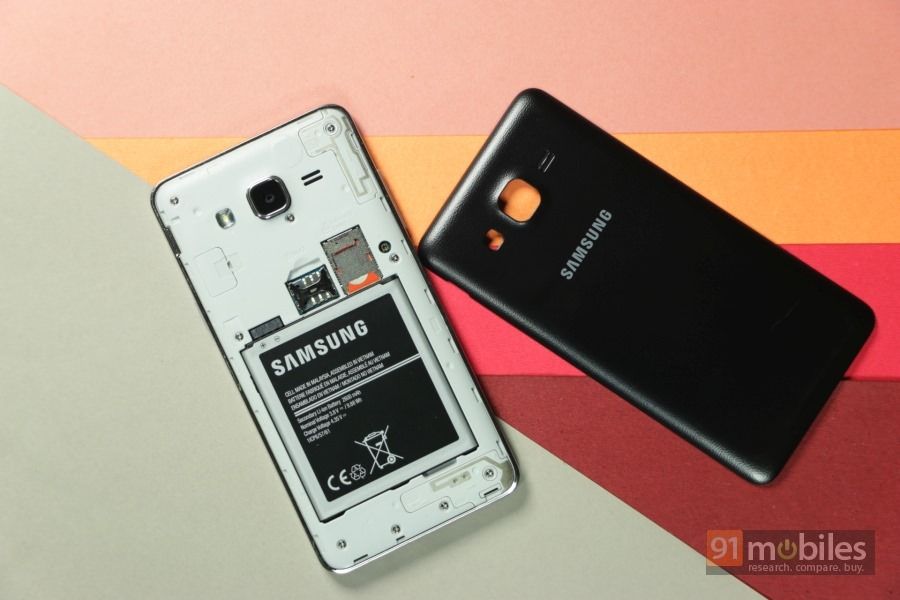 The rear is home to the camera sensor towards the top, which comes sandwiched between an LED flash on the left, and a speaker grille on the right. Below this horizontal arrangement you will find Samsung branding. The back cover can be snapped off to reveal a user-replaceable battery, two micro-SIM slots and a microSD card slot. 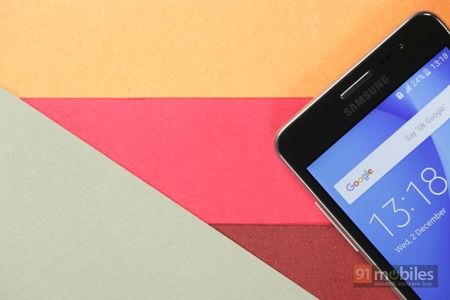 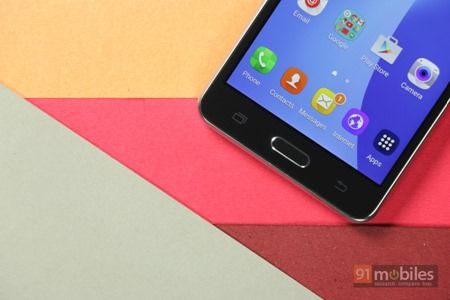 Up front, there’s a compact 5-inch display, above which you will find the company’s branding, an earpiece, the front camera and a few sensors. Below the screen, there’s the signature Samsung home button along with other capacitive navigation keys on either sides. 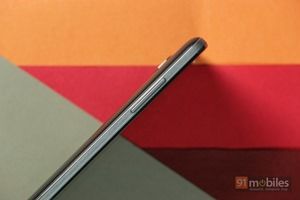 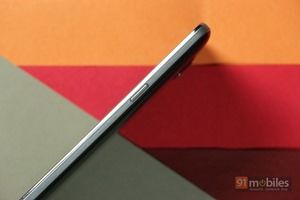 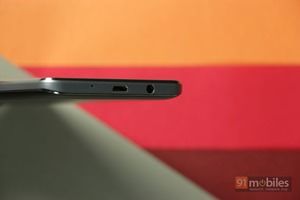 The volume rocker is on the left edge, while the right spine carries the power button. The top edge of the phone remains barren since the primary microphone, micro-USB port and the audio jack are all on the bottom.

The overall design of the Samsung Galaxy On5 is simple, with a hint of class. The textured back panel, just the right amount of weight and a compact display all contribute to the easy handling of the device. The gold variant, which we checked out during our first impressions, might appeal to users looking for more bling.

Display: not awesome, not awful

The 5-inch display of the Galaxy On5 offers HD resolution. The screen looks decently sharp, but, it’s not one of the sharpest displays you can find in this price segment. Nonetheless, the text and icons looked sharp and it was impossible to discern any pixels with naked eyes. The colours do look vibrant and vivid, but the viewing angles are only average. Interestingly, sunlight legibility is decent when you keep the brightness on maximum as the display doesn’t look washed out. There’s a special outdoor mode as well, which ramps up the brightness further for 15 minutes, when you’re out in bright sunlight. The mode turn off automatically after 15 minutes. One little qualm that we do have is the fact that there’s no ambient light sensor for controlling screen brightness. The screen is not as responsive in terms of touch sensitivity as we’d have liked either. 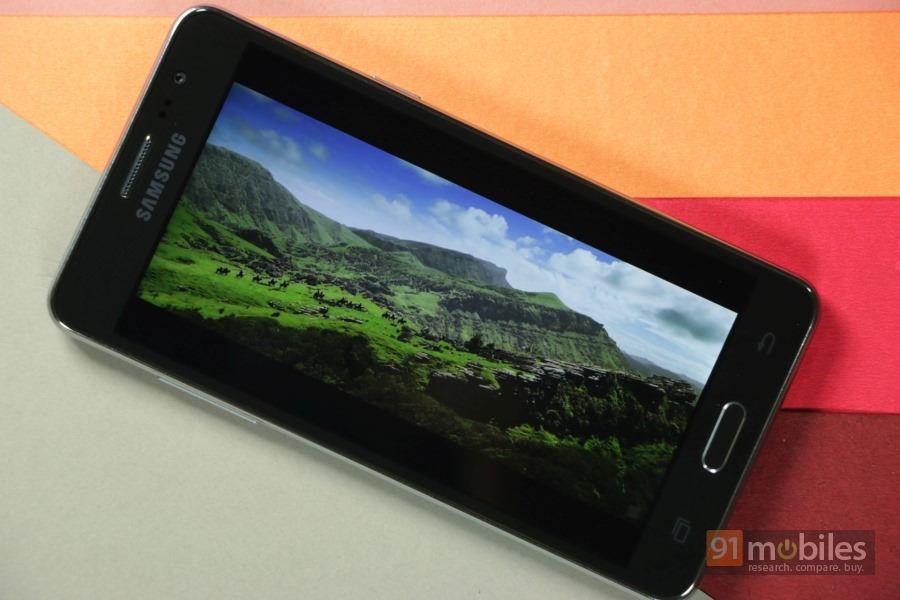 Camera: impressive for the price

The camera is one of those features on budget phones where smartphone makers usually cut corners. On paper you see a big number when it comes to megapixels, but the image quality doesn’t justify the same. However, that’s not the case with the On5’s shooters. 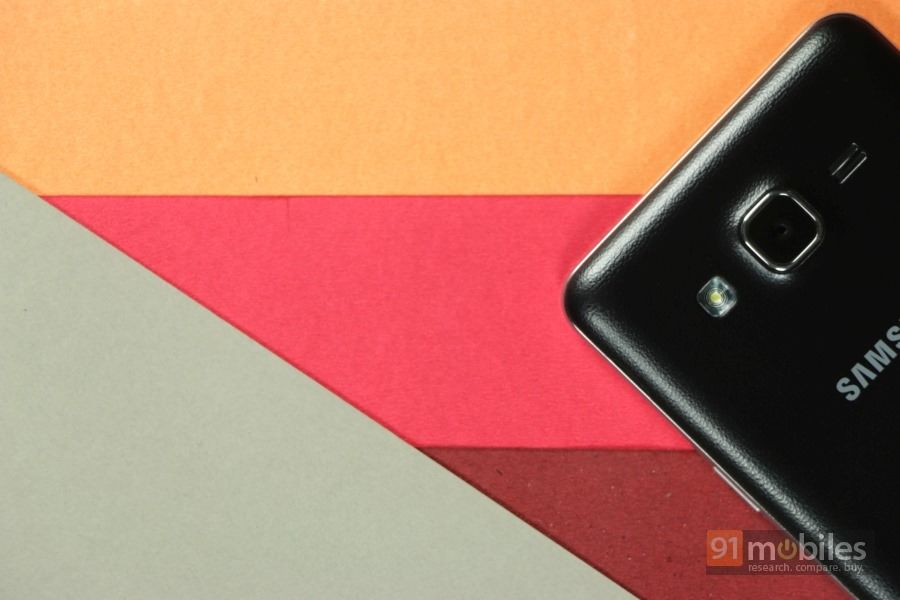 The Galaxy On5’s rear boasts a modest 8MP camera with LED flash, while in the front, it gets a 5MP snapper. 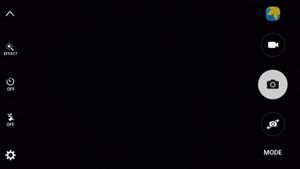 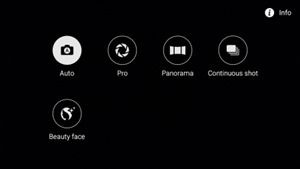 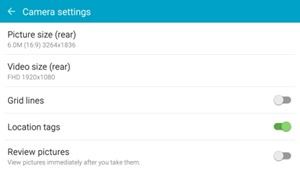 The camera app features the usual assortment of a virtual camera shutter button, video mode, front-camera switching button and a bunch of shooting modes, along with standard camera settings.

The rear camera manages to capture a fair amount of detail and reproduces natural colours. The long shots we took were not disappointing. The macro shots were absolutely delightful. During the night, the shooter struggles a bit, but as long as there is abundant lighting, you should be all right. Similar is the case with the On5’s front camera. Read our camera review for an in-depth take on the Galaxy On5’s shooting prowess. Meanwhile, here are some pictures taken with the primary camera of the device. 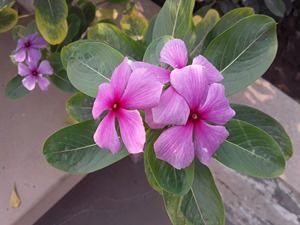 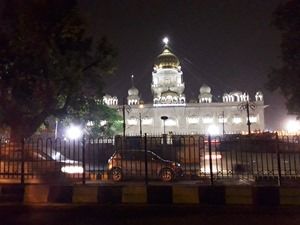 There’s nothing new about the On5’s software, as the phone runs the brand’s Touchwiz UI atop Android v5.1.1. 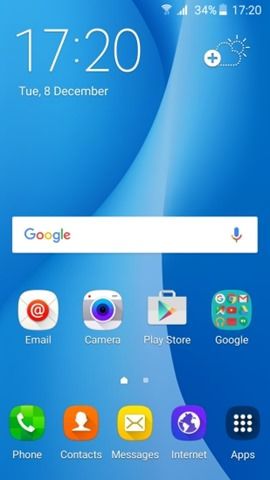 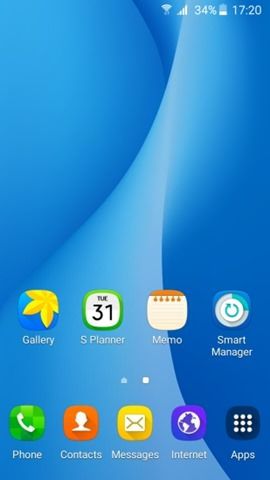 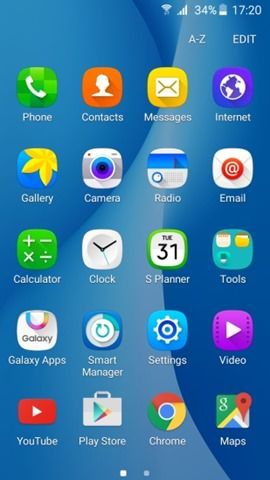 The smartphone doesn’t ship with much bloatware and you will find the signature Touchwiz elements, which gel nicely with the material design. There’s S Planner and Smart Manager, the former letting you manage your schedule, and the latter helping you optimise the performance of the device. 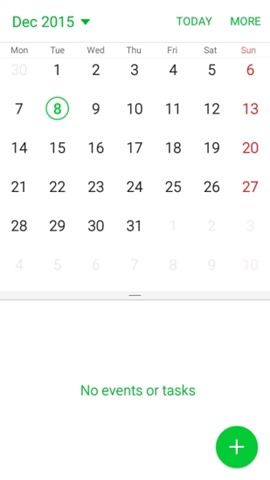 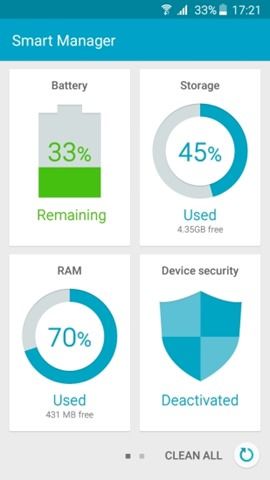 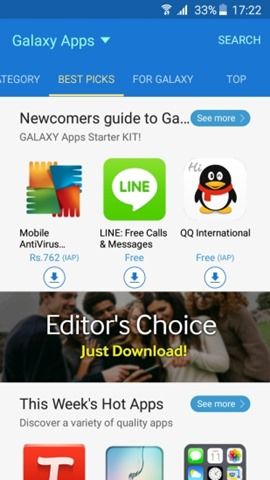 There’s also Galaxy Apps which is a hub for the best apps and deals based on your requirements. Recently, Samsung partnered with MixRadio, and the On5 comes preloaded with the music streaming app. 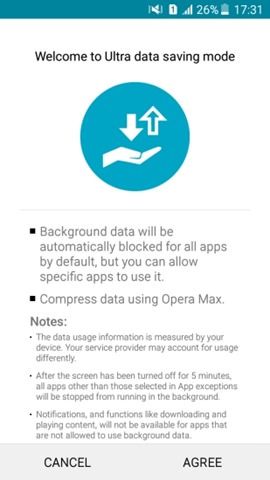 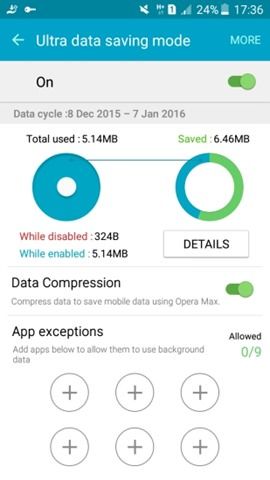 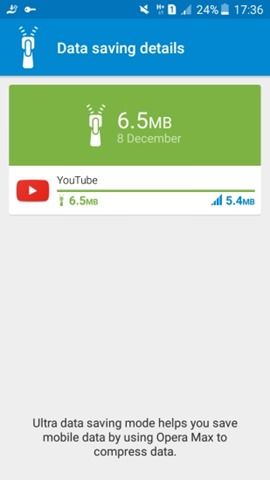 Another pre-loaded app you will find on the device is Opera Max, which in conjunction with Samsung’s Ultra Data Saving Mode, compresses data. We played an HD video on Youtube for the same duration, once on Wi-Fi, and once with the mobile data. While the Wi-Fi usage summed up to 16MB, our usage for the mobile data was calculated at just 5MB. All apps from Google round up the other apps you get on the Galaxy On5. There is nothing special about the UI of the Samsung Galaxy On5. As a matter of fact, if you’ve used a Samsung smartphone before, you will love this less crowded version of the software.

The Samsung Galaxy On5 is not a beast when it comes to its processor. Powered by the brand’s own Exynos 3475 SoC, the phone gets 1.5 gigs of RAM, which is not a whole lot. However, regular usage didn’t suffer because of this. The device makes use of all its four cores, varying the clock speed depending upon the usage. While regular usage made use of a clock speed of 403MHz, heavy usage has the processor ticking between 1GHz-1.3GHz. Launching and switching between apps was not completely fluid, but was reasonably smooth 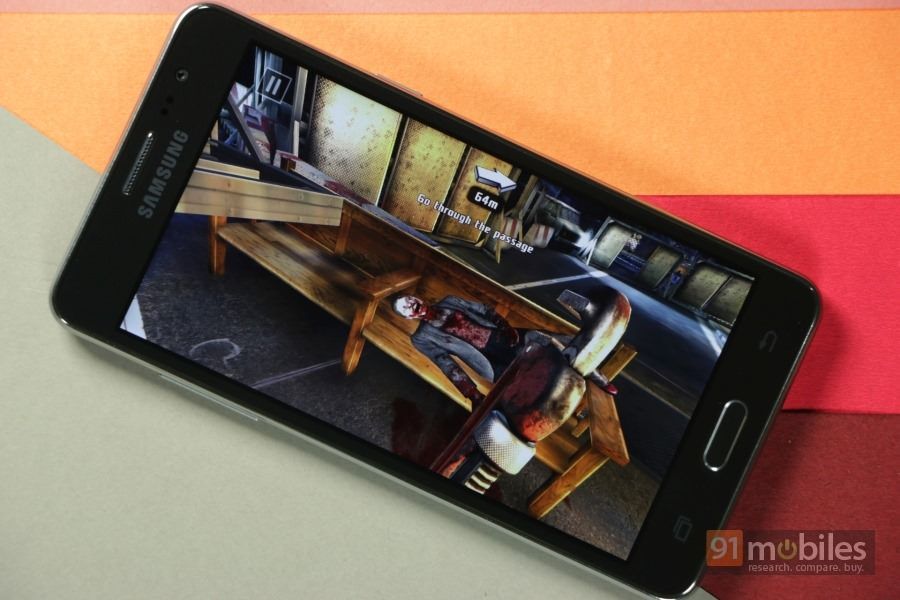 The GPU used by the On5 is a Mali T720. To stress the processor and test the graphics rendering, we played Asphalt 8: Airborne and Dead Trigger 2 on the device. Initially the games stuttered a bit during loading, and we thought we might not enjoy our favourite games all that much on this device. But, to our surprise, the Galaxy On5 took on the heavy graphic games pretty well. The actual gameplay remained smooth, and the graphics were rendered impressively as well, the cherry on the cake being no overheating. 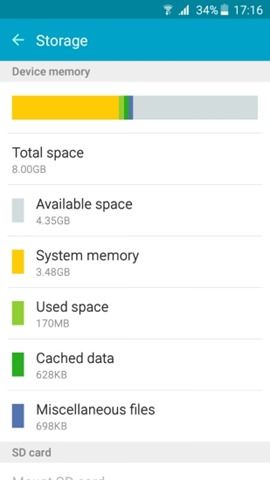 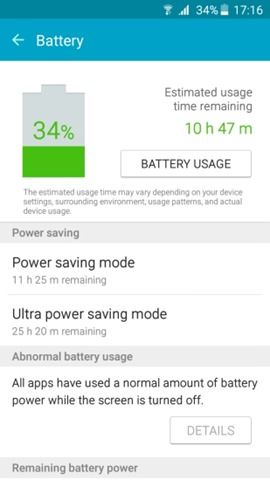 The Samsung Galaxy On7 ships with 8GB of inbuilt storage, which is too little for our liking. You get about 4.3GB of storage for your use, as the rest is taken up by the software and preloaded apps. The battery is rated at 2,600mAh and is the best part about the On5. With mobile data running, and using the phone like we normally would, the device cruised smoothly until the end of the day. On our standard battery test which involves running a 720p video on loop with the volume and brightness set to 50 percent, the phone lasted for 12 hours, which is impressive. However, if you do run out of the juice sooner than expected, you can use Samsung’s usual power saving modes. The Ultra power saving mode is also available on the smartphone.

Apart from support for 4G, the Samsung Galaxy On5 comes with connectivity options like Wi-Fi 802.11 b/g/n, Wi-Fi direct, A-GPS, GLONASS, Bluetooth v4.1 and USB on the go. 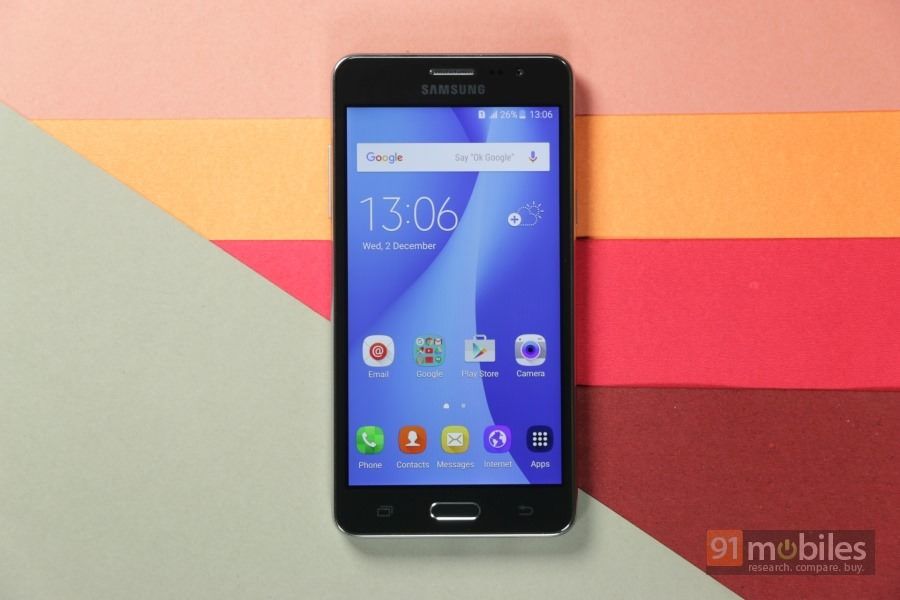 The Samsung Galaxy On5 offers a mix of good and, well… ‘meh’. The good being its subtle yet stylish design, a capable pair of shooters and amazing battery life. The ‘meh’ part comprises an average display and performance. Considering the price tag, the phone competes with the likes of YU Yuphoria (review) and Lenovo Vibe P1m (first impressions). While the YU Yuphoria offers extremely customisable CyanogenMod ROM, decent cameras and uber-stylish looks, it lacks in terms of battery life. The Lenovo Vibe P1m has a 4,000mAh battery, while rest of its specs stand almost similar to those of On5’s. If one-handed usage is not an absolute necessity, the On5 faces competition from the Coolpad Note 3 (review), which rocks a fingerprint scanner, and a large 5.5-inch display.

The Samsung Galaxy On5 does stand as a worthy competitor in the sub- Rs 10,000 segment. As far as regular usage is concerned, the phone doesn’t really do anything to displease you, and hence, it is worth considering for the price, especially if you’re looking for a compact device for easy one-handed use.

Competitors for Samsung Galaxy On5
ShareTweetShare